A day of culture was in order but it started with a stop at Dipi Larsou and a walk down to the bay through the reeds and Tamarisks. It was already hot and there is not much cover out there but I still found two each of Willow Warbler, Lesser Whitethroat, Reed and Cetti’s Warblers foraging but it was the singing Fan Tailed Warbler that I was most pleased with as it bounced across the marsh on an invisible piece of elastic. 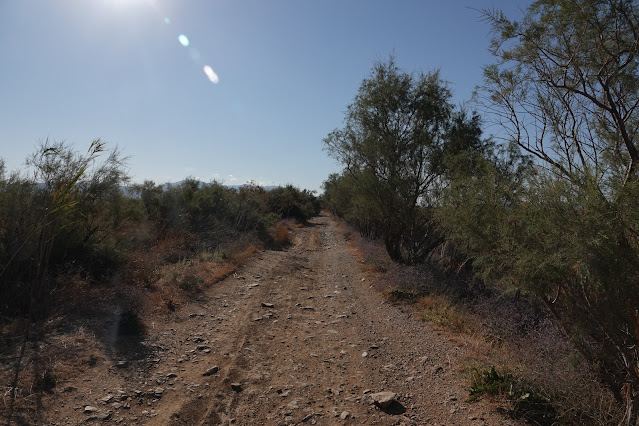 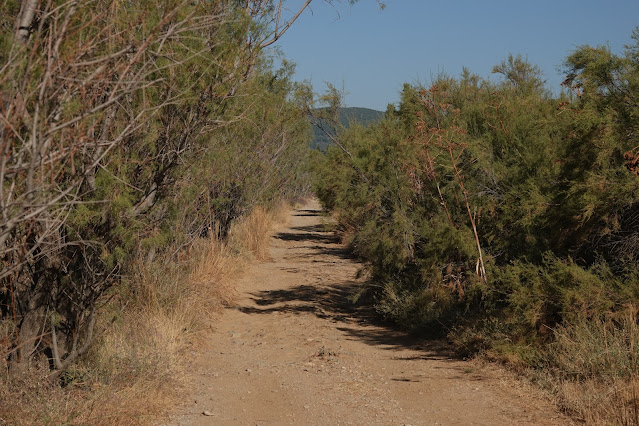 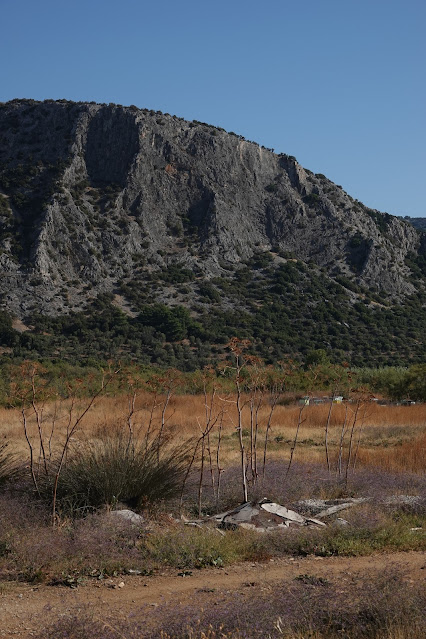 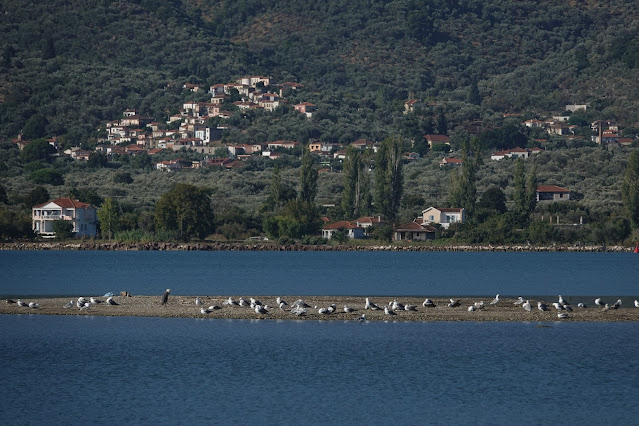 From here my phone map guided me at long last to the stunning multi arched Roman aqueduct at Moria that has eluded me up till now. It truly is a marvel and I would recommend a visit. There was no one else there at all. 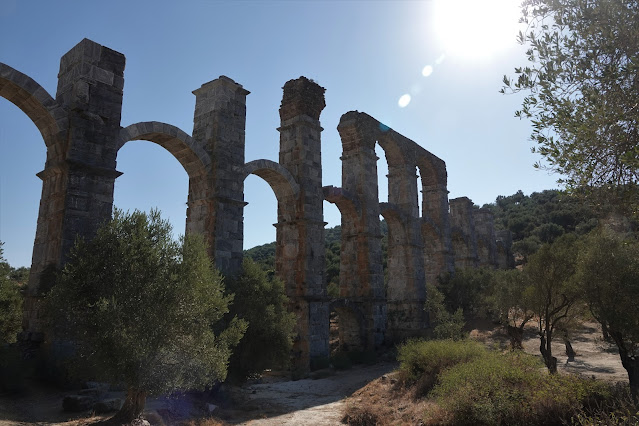 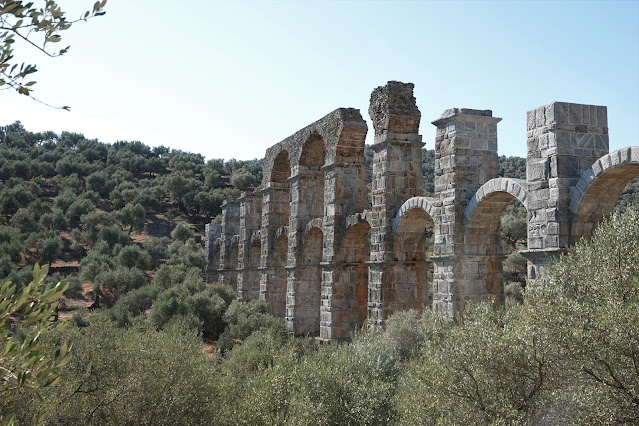 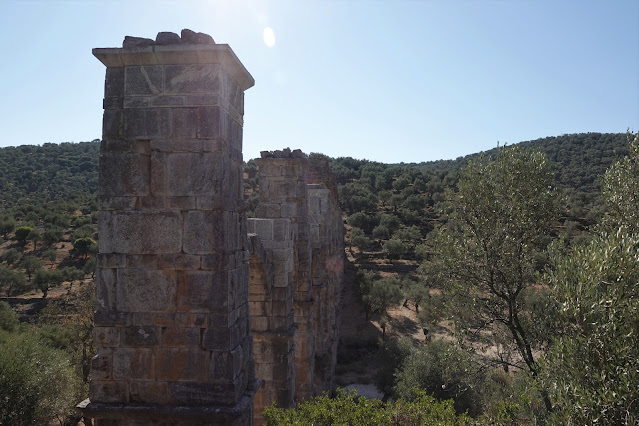 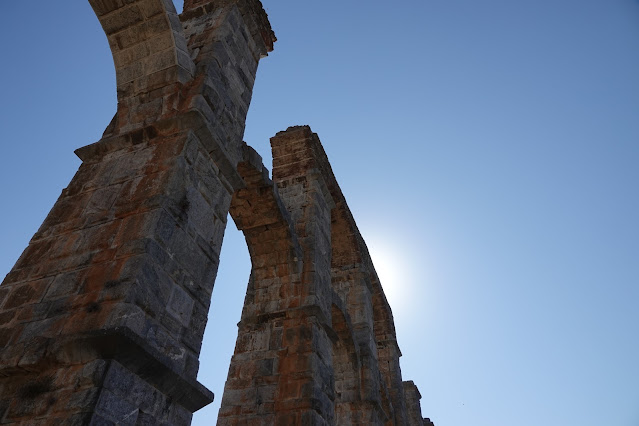 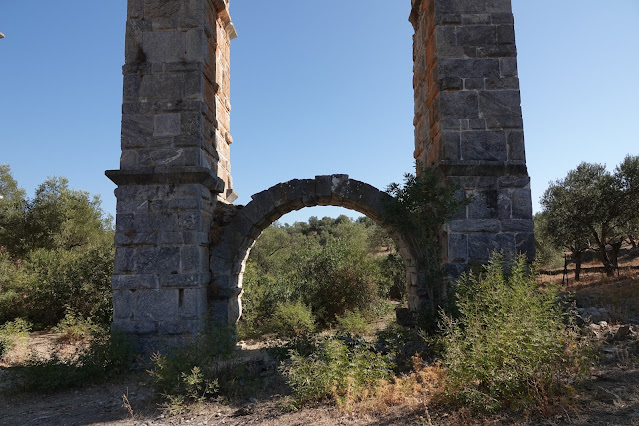 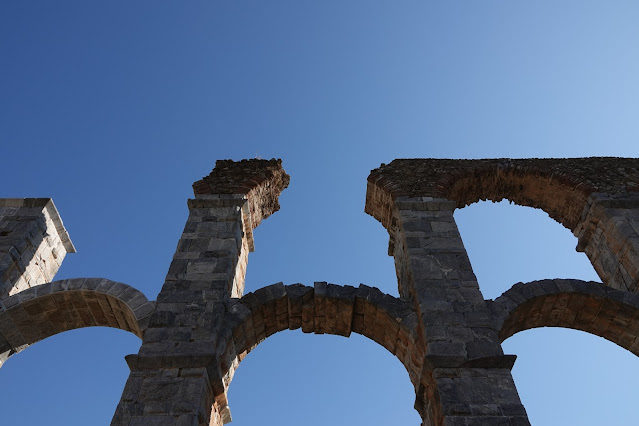 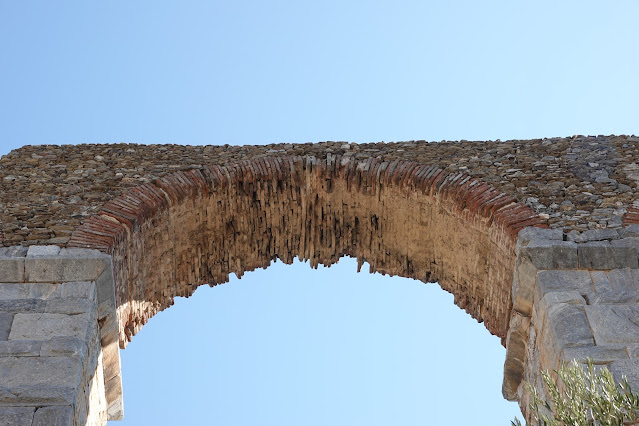 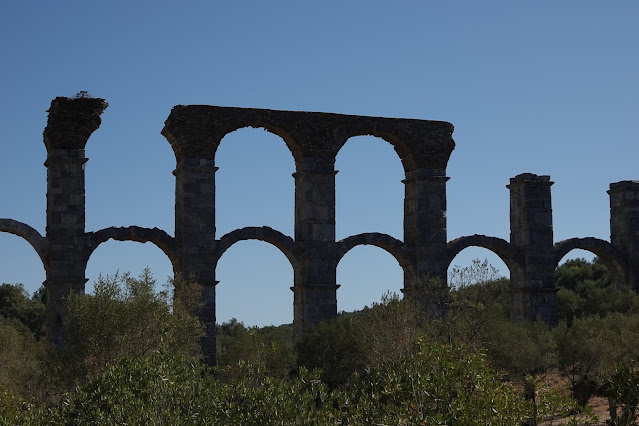 House Sparrows were nesting in the very highest sections comprised of arching thick tiles and Middle Spotted Woodpeckers and Jays were in the groves underneath. It was here that I found the only new bird for the trip with a very vocal immature type Collared Flycatcher that a low flying Buzzard spooked into calling for me.

Instead of trying squeeze back through Moria I continued south through the olives to the main road passing a fine male Blue Rock Thrush on a rooftop on the way before looping back up past the village again on my way up to the coast.

Not far along the coast road I saw a sign for the Thermi archaeological site and swung in for a look. The man on the gate was very pleased to have guests and frantically unfurled the entrance flags and at 3€ a head it was worth the admission to firstly watch a short documentary about this Bronze Age site before wandering around the ruins. 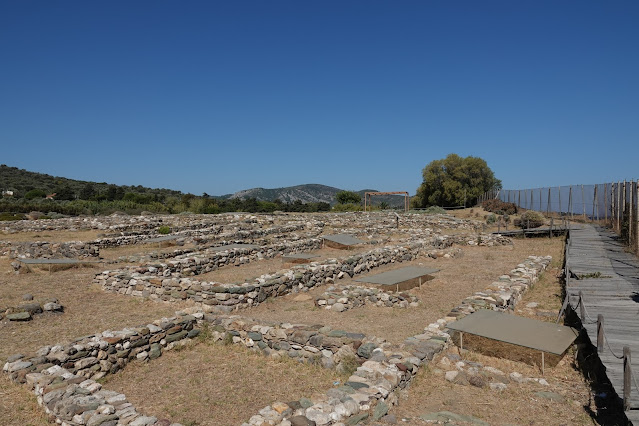 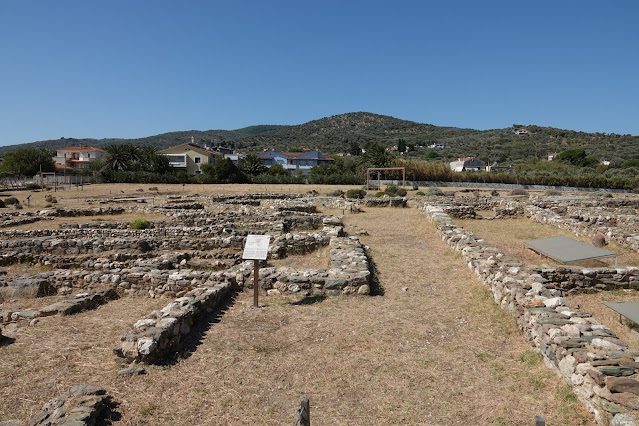 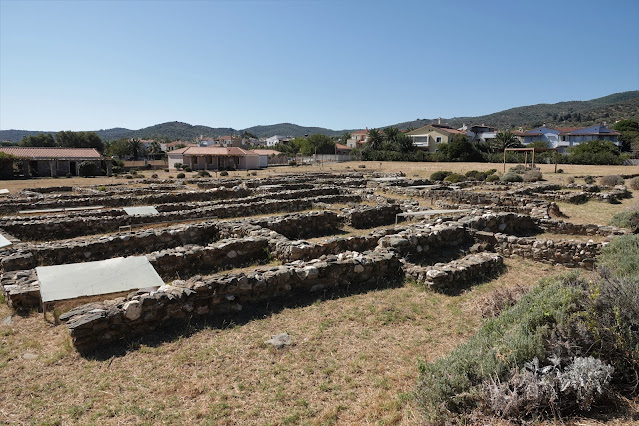 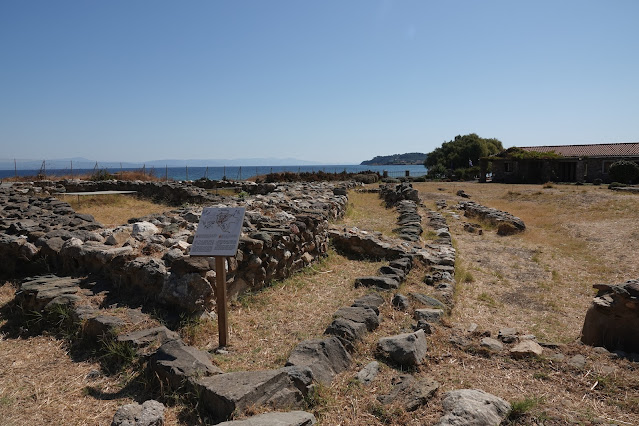 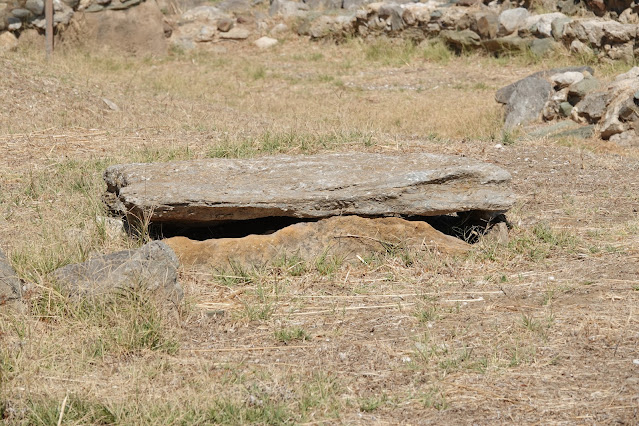 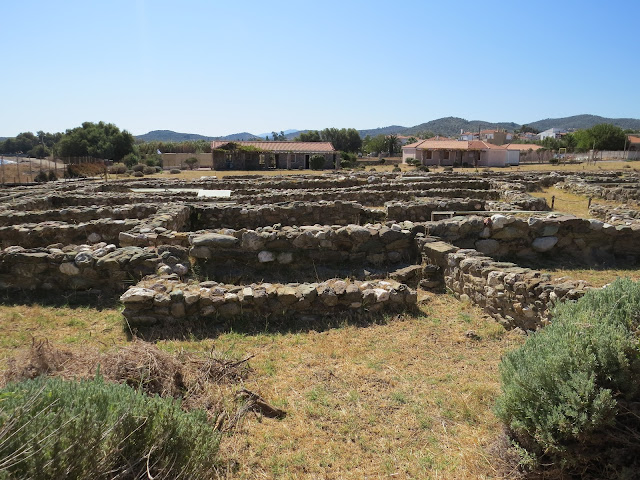 Of course there were birds too and being immediately opposite the Turkish coast gave a 'fresh in' feel to the Spotted Flycatchers, Whinchats, Northern Wheatears, Willow Warblers and Tawny Pipits perched on ancient walls and new interpretation signs. A Hoopoe gave wondrous views as it probed the dry ground for grubs.


I have never driven the road north towards Mantamados before and it is a great coastal drive through the Greek equivalent of Garrigue scrub. Sardinian Warblers could be heard from the car and a couple wobbled across the road. The bays and tavernas looked deserted which was a shame and the sea was shades of turquoise and jade but unspoilt by bobbing heads. A Black Stork and a couple of Ravens and Jackdaws were seen but I was just enjoying the vistas.

Tsonia was next for a swim and I expected the car park to be full but it was empty. A bob in the warm sea, lunch and frappe and then onwards along the coast.

We bumped into Peter and John at the Raptor lay-by at Lepetimnos and were instantly surrounded by tumbling kronking Ravens. A quick half hour saw an incoming Short-toed Eagle and two dark Honey Buzzards which quickly climbed up and into the blue. It was too clear and bright to see much and I suspect birds were coming in far higher than we could see.

A little further down the road 45 more Ravens swirled over the mountains and played effortlessly. Time to head for home with an almost birdless stop at Kavaki where a low hovering Short-toed Eagle was the only bird seen at all!

With dinner at Alison and Costas arranged for 7pm there was still time for me to have a scoot out onto Lotzaria. It felt like there had been a huge clear out of passerines with only a few Wagtails, Chats and just Red- backed Shrikes seen. Singles of Tawny and Tree Pipit were found and another Short-toed Eagle circled low. The Spur Winged Plover was still in the Tsiknias Lower Ford with six Little Ringed Plovers, two Snipe and the mad Greenshank while one Cretzschmar's Bunting came in. There was no sign of Pia's Little Crake and two Kingfishers played chase before I had to head back for dinner. 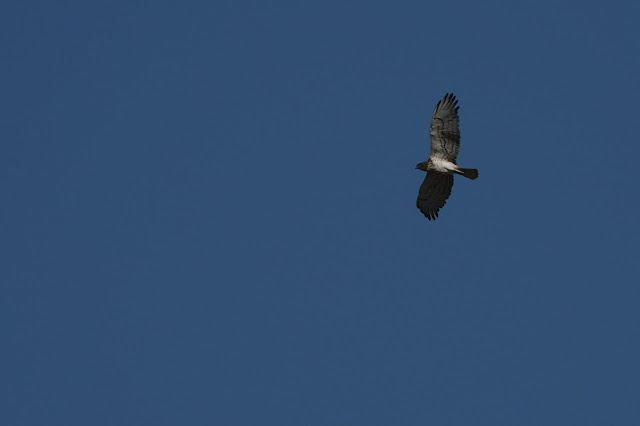 A leisurely dinner in Anaxos and then the drive back in the dark hoping, as ever for a Beech Marten but as usual finding only a few Cats and two roadside Foxes and some larger Bats.  The sky above was breath-taking.

Posted by Howard Vaughan at 08:07 No comments: