A Plod Around The Patch

On Thursday I got into work just before seven and set out along the river wall. It was pleasantly cool at that time, with an autumnal feel. The Thames was quiet and calm and high tide was imminent precluding any waders to watch but the bushes and Brambles were full of life with parties of foraging Whitethroats working their way west in front of me.  Blue and Long-tailed Tits were their carrier species and four pristine little Lesser Whitethroats with bandit masks were seen along with a single lemony Willow Warbler in the big Sallow. 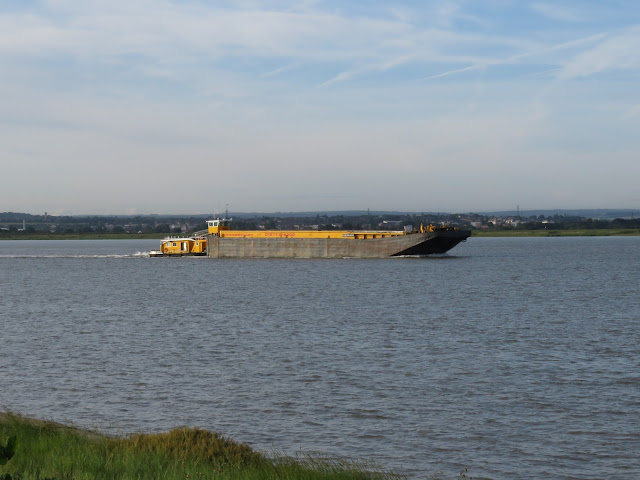 Seventy House Sparrows also shuffled along the path in front of me and seemed to be feeding collecting grass seed from the edges while several hundred patchy plumaged Starlings descended en masse to ravage the Brambles of their fruit.


I could hear Bearded Tits in the ditch below and there were several Reed Buntings and Sedge Warblers flitting around as I descended to the turnstile gate. The Beardies were immediately on view I watched two maturing juveniles working their way steadily along the water margin, delicately leaning down between splayed legs to pick up a morsel.  They never stopped calling and I could hear others further up the channel while a Skylark (never an easy August bird here) chirruped from the fields.

Goldfinches and Linnets were feeding avidly around me and both seem to have had a great breeding season. The Goldies are naturally attracted to the Creeping Thistles that are going to seed while the Linnets seem to prefer the tall Crucifer that has now finished and dried out.

One of my favourite patches of flowers on the trail this time of year is the nodding yellow heads of Perennial Sow Thistle just before the Dragonfly Pool.  There were only a few Bumbles on them but I cannot resist touching the flowers as they are so amazingly soft and fluffy. 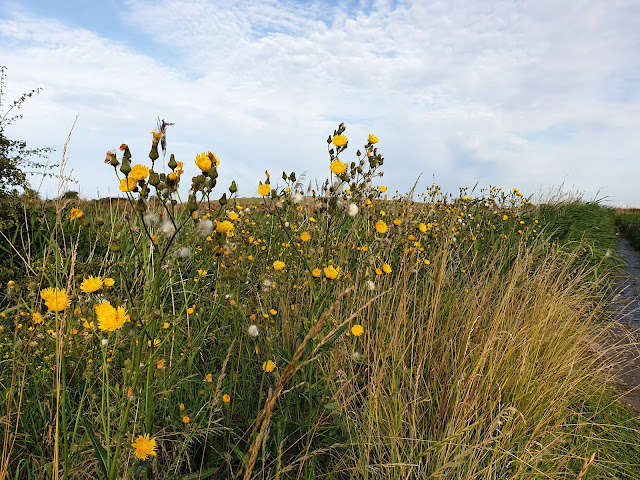 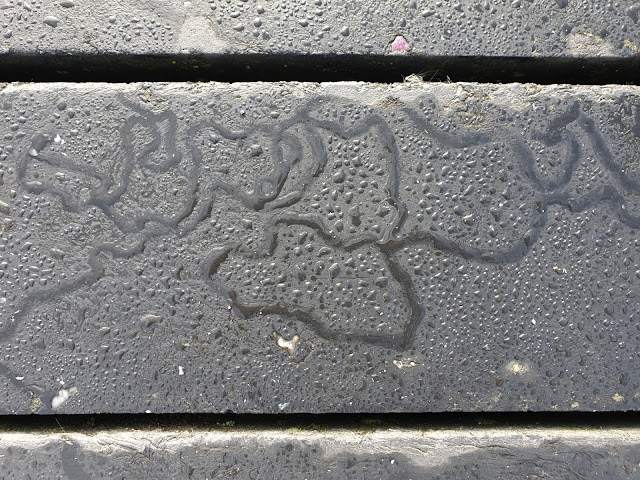 A young Grey Heron landed up on the handrail and gave me a hard stare before croaking and heading off down the channel.  I wonder if it was the youngster I temporarily rescued a month ago? 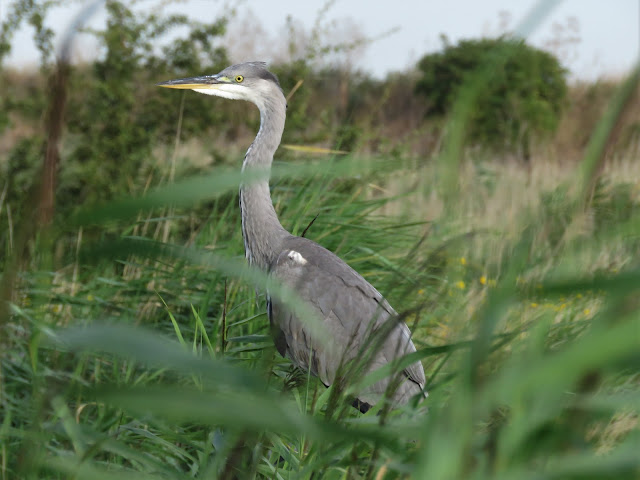 Reed and Sedge Warblers flitted in front and there were several Painted Ladies sunbathing in the growing warmth.  We have not had the mass arrival witnessed further up the east coast but it was nice to see some pristine ones rather than the worn battered individuals that have been around.

A juvenile Marsh Harrier cruised across from Wennington and half heartily spooked the Little Egrets from in front of the Butts Hide but as usual (for me) there was no sign of the juvenile Cattle Egret that I have only seen so far in flight.  Sixteen Littles were either huddled on an island preening or wading in the shallows. The latter had several Gadwall for company who were following along in the wake of their foot stirrings and well grown Little Grebelets were merrily catching Sticklebacks.

A Common Sandpiper bobbed along the margins making considered assaults on the local fly population but three Lapwing were the only other waders at this point.

Green Sandpiper was added to that list a short distance further on as it watched me from the aptly named Tringa Pool and more Beardies pinged.


Aveley Pool was subject to a gull invasion with newly fledged Herring and Lesser Black-backed Gull families loafing about.   I found two juvenile Yellow-legged Gulls and what I was happy was a brute of a juvenile Caspian although I only got a poor front on shot of the bird. 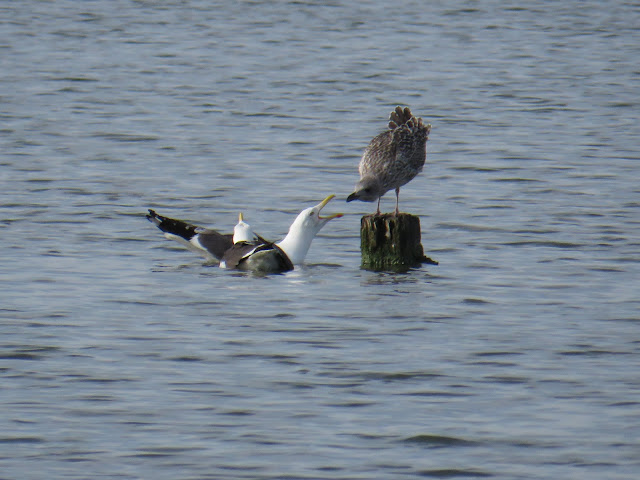 The two Ruff were still there with 31 Black-tailed Godwits and a juvenile Ringed Plover was a new in bird but there is little in the way of mud to drag in much more.

One of my desires for this walk was to catch up with one of the Blue Eyed Hawkers that have been patrolling the reserve. It was warm enough as I reached the end of the boardwalk to encourage Hawkers to get up and the very first one I saw was a cracking male BEH.  He patrolled his stretch diligently and seemed to have some success catching small flies from the Great Willowherb.  I watched him until an almost as smart male Migrant Hawker came in and pushed him off patch.

A Snipe was hiding in front of the Ken Barrett Hide and there was a line of lazy Teal dozing on the edge and there were several soft pink heads of Flowering Rush.  This area feels quite crakey but I did not even see a Water Rail. 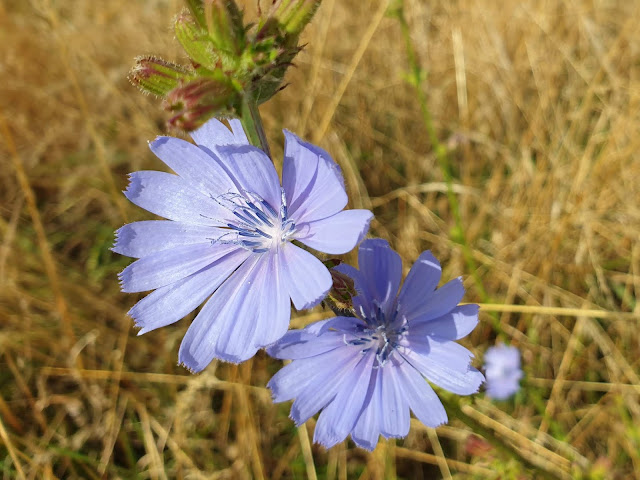 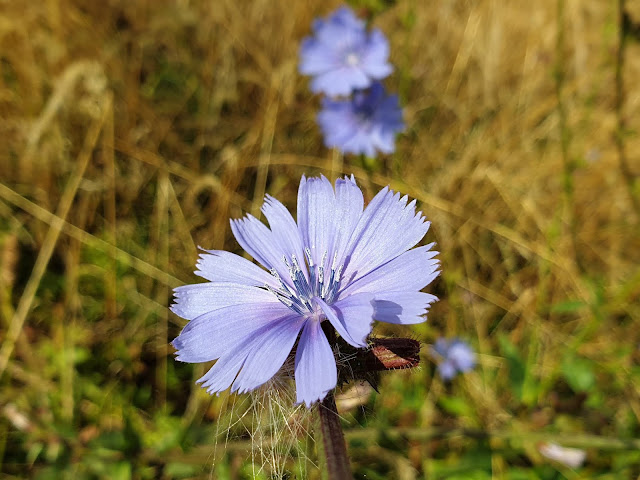 The Woodland was quiet although I did add both Woodpeckers, Blackcap and Chiffchaff before coming around a corner and finding a half grown Muntjac crossing the path! As usual, dog sprang to mind before the brain caught up. It moved into the Cordite edge but there was still movement on the other side of the path and there was its mum staring at me.

I offered her safe passage but she bolted the other way towards the adventure playground and proceeded to bark as I headed up that way, obviously trying to tell her offspring which was she had gone.  This is the first time I have seen one here and I reckon that there have only been a few previous records.

I managed to do a circuit of the car park and wildlife garden before settling down for a day inside and the Greek Marjoram in the herb bed was attracting three species of chunky Volucella with zonaria, inanis and pellucens nectaring on this and the Black Knight buddelia.

Tatty Gatekeepers jostled amongst them and the Honey Bees and Wool Carders were in the process of creating the next generation and Red Admirals, Holly Blues, Commas, Small Whites and Jersey Tigers flitted around the blooms.

Wasp Spiders had strung their fresh webs across their footstep sized grass gaps and Field Grasshoppers were whirring away but it was time to tear myself away and retreat indoors only to be serenaded by the mellifluous tones of the escaped Canary that has been singing his little heart out since Sunday morning.