I saw a couple of posts yesterday about the 'demned elusive Pimpernel' of Ranscombe and with a scorcher predicted I headed that way after breakfast and some early shopping.  It is amazing how quickly things change and although the vista out across Longhoes and the Medway beyond remains the same; the colours are not with the Bugloss and most of the yellow composites now over in this location. 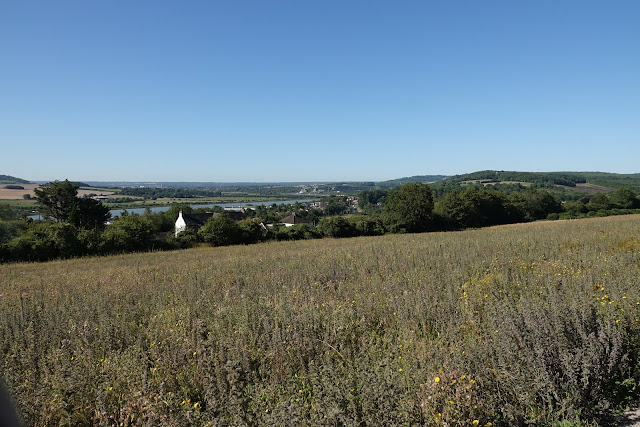 The meadow above the car park was however a sea of frothy Wild Carrot and I should have really stopped to check it out but pushed.  The fields have been mown on the east side of the valley and the first hay bales were visible while Whitebeam berries and Acorns were ripening in the sunshine. 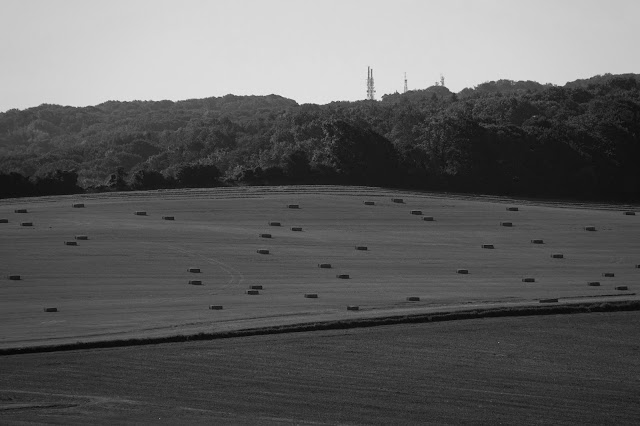 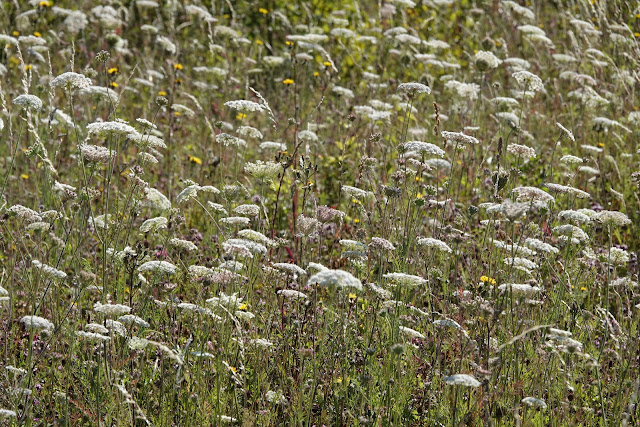 A Small Copper briefly alighted on the path and there were several sulphurous Brimstones in the verge.  Nuthatches and Bullfinches called invisibly and a Chiffchaff loudly hweeted at me.

The Ragwort Meadow was still in full bloom but the view down towards the Valley showed that the seasons were well on the turn with almost no colour bar shades of brown and splashes of yellow Ragwort from the viewpoint. 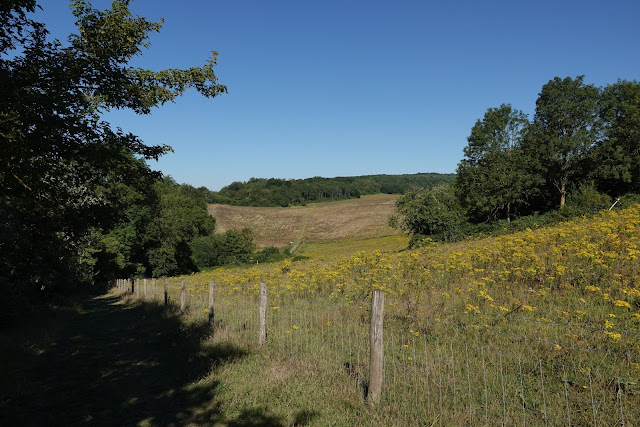 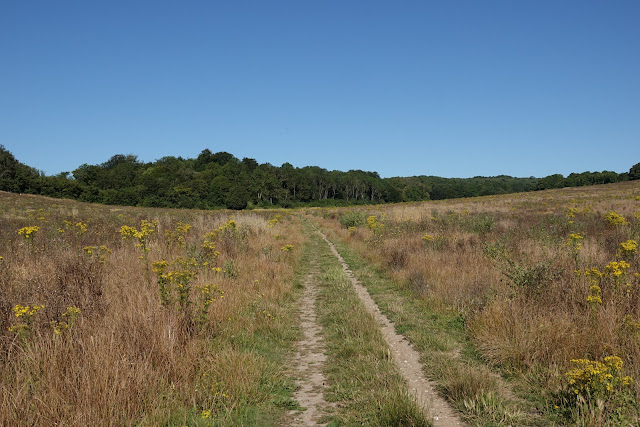 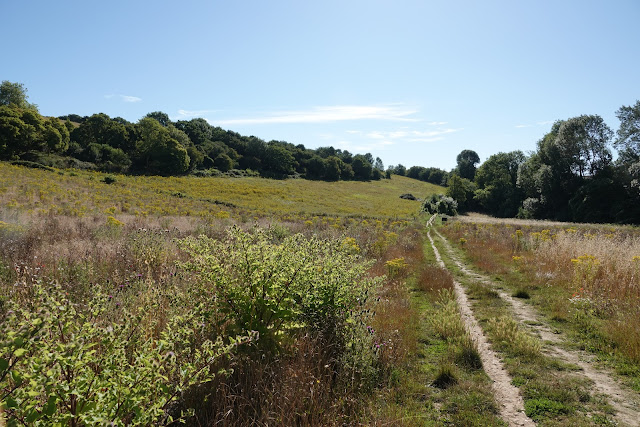 Closer to, there were still clumps of Greater Burdock and Thistles and Red Admiral and Painted Lady were on the path. It was already seriously warm out in the open of the Valley so I pushed on up to the Kitchen Field in search of my quarry passing the top field full of yellow Hawkweed Oxtounge.

It took a little while and some serious staring at my feet but eventually I came upon my little Blue prize nestled alongside its Scarlet companion and proceeded to hunker down to take some pictures.  I have only seen it on Lesvos before so it was good to finally see it so close to home. 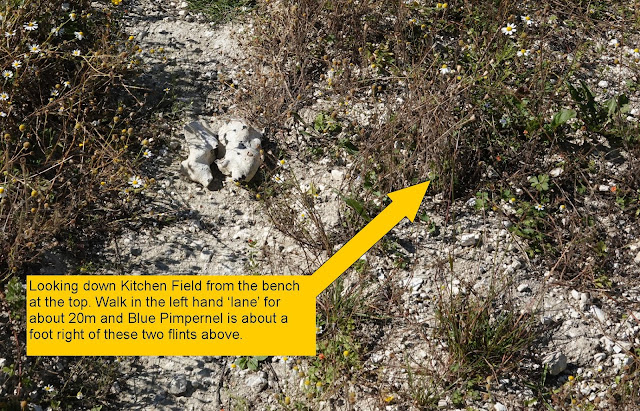 There were lots of Broad-leaved Cudweed around where I sat but the only downside was sitting on the rather odorous Stinking Chamomile!

I cut back across Kitchen Field and up through Brockholes where the grazing cattle gave me a start as they were over belly deep in the scrubby pasture.  The next meadow down was alive with butterflies with the majority being Meadow Browns, Gatekeepers, Common Blues and Marbled Whites although I did find a few Brown Argus, Brimstones and Whites. 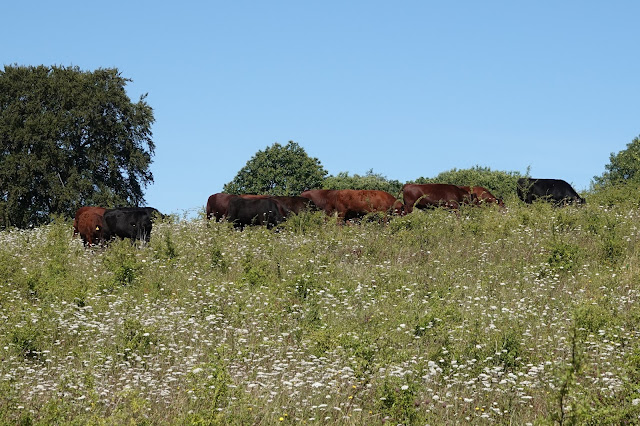 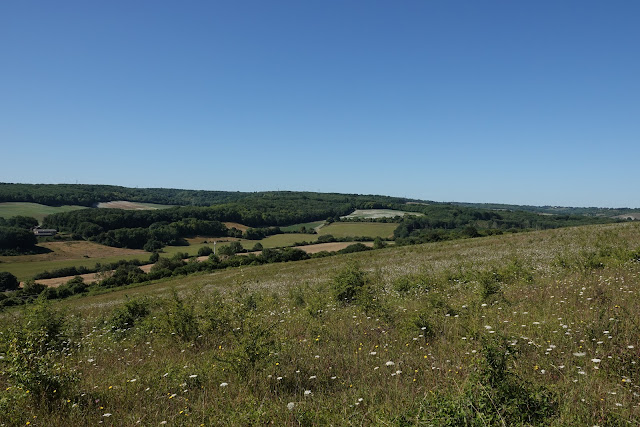 Down at the bottom gate I found four Ferdinandea cuprea basking on the gate post with one on a composite flower. 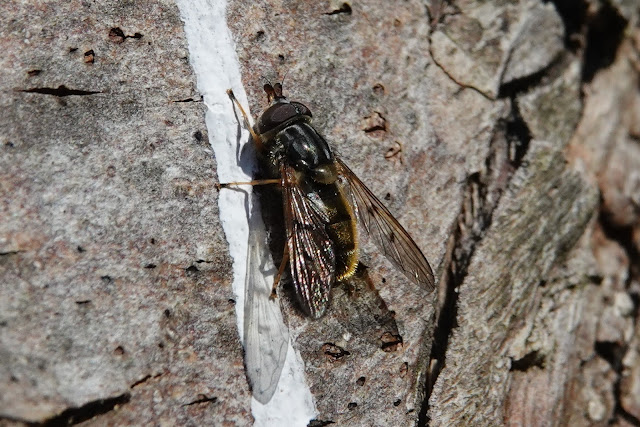 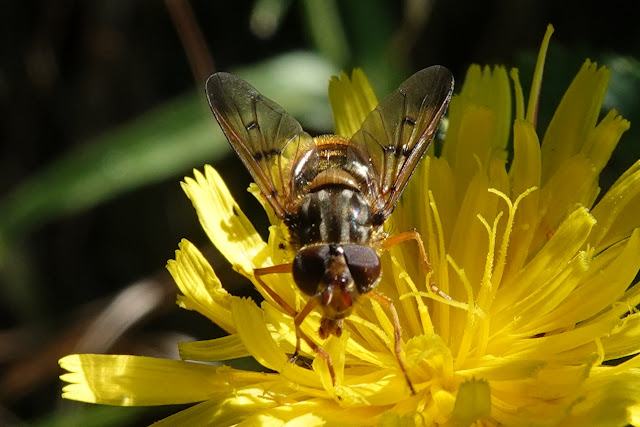 Myathropa florea was also present and the clearing immediately through the gate held more of the same butterflies but with the addition of my first Large Skippers for a while and a dazzling Silver Washed Fritillary that posed very nicely for me.


Oncocera semirubella and Agapeta hamana were in the grass and I found several Tumbling Flower Beetles on wild carrot with Terellia tussilaginis who were commuting to and from the overhanging Burdock that they would call home.

A single conopid briefly came in and I think it is a male Conops quadrifasciatus and a good look at a hoverfly with orange antenna gave me my first confirmed Cheilosia soror. You have to keep trying to improve the pictures as this is the only way bar the collecting specimens to progress but  I understand that many will still not be identifiable from even wondrous images but I shall persevere!

I followed the cobble track back into the woods past a few still fresh Nettle-leaved Bellflowers and then cut up to the Darnley Mausoleum where I was greeted by the scent of giant stands of sun heated Bracken.  It is surely one of the most distinctive smells of a hot British summers day. 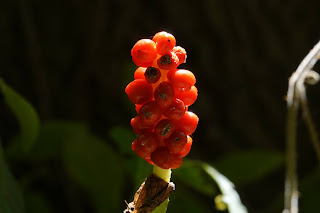 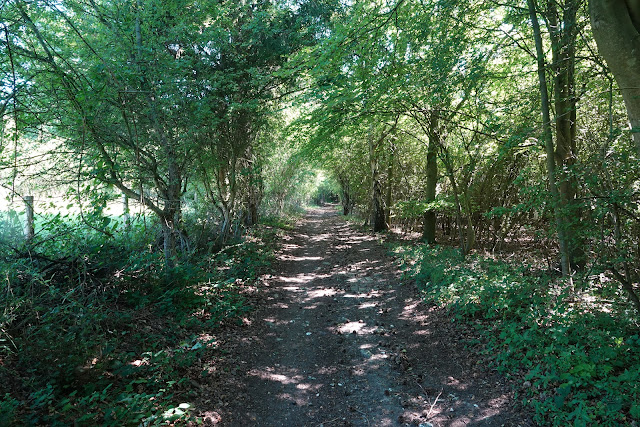 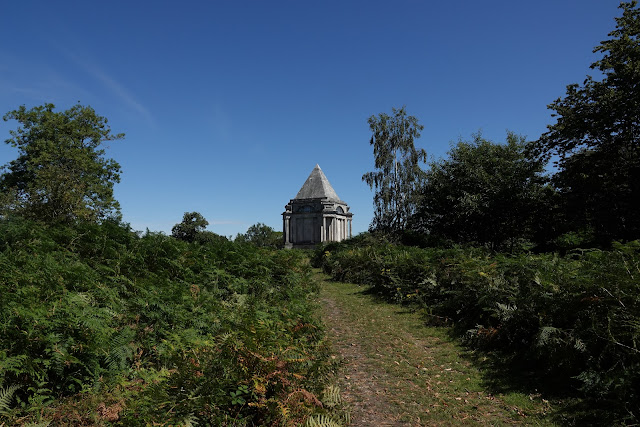 A different beetles was feeding on a Yarrow flowerhead and I believe that it may be the scarce Tawny Longhorn Beetle - Paracorymbia fulva. It was certainly a new one on me. A small shovel nosed Dung Beetle was droning around looking for fresh pats and only finding crusty ones and Red Admirals and Peacocks were still on the pathsides where I saw them on Monday.

I cut down past the Anthophora Bee Bank which was in full sun and there was loads of activity and noise but today they would just not stop long enough for a picture! The other bee species that I have not yet identified was still using the lower holes and the large Black Ant species was ambling in and out of the burrows.

A group of what I am sure are Ectemnius lituratus were on a patch of Tall Hedge Parsley and although I know these are a difficult family I am quietly confident of my identification partly based on my images of the males from Monday.


Down at the bottom of the ride there were still a few bulbous red eyed Chrysogaster solstitialis on the Wild Carrot along with a bump ‘nosed’ Cheilosia that I think is C. scutellata.


I had a bit of field day on the Carrot blooms at this point and got so many images of unidentifiable wasps and flies!  Hopefully there will be folk out there who can point me in the right direction. 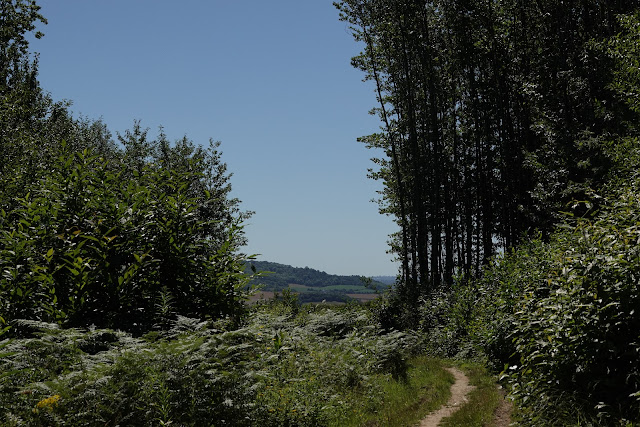 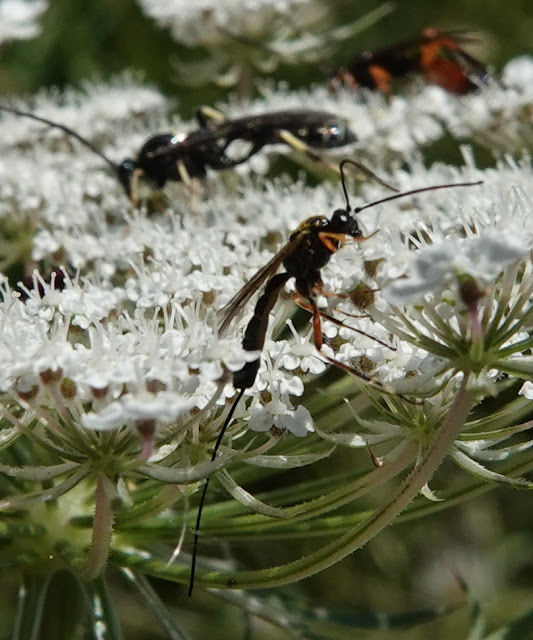 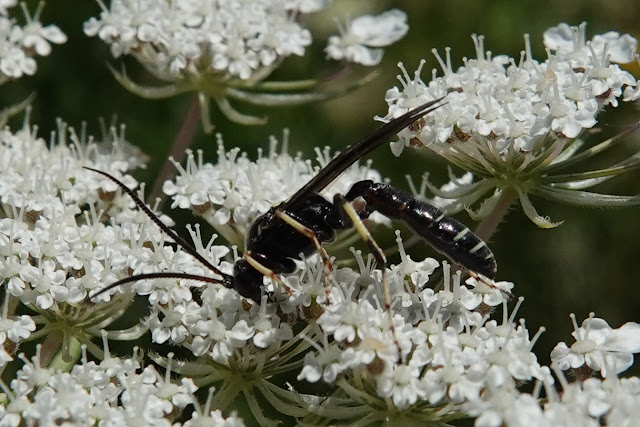 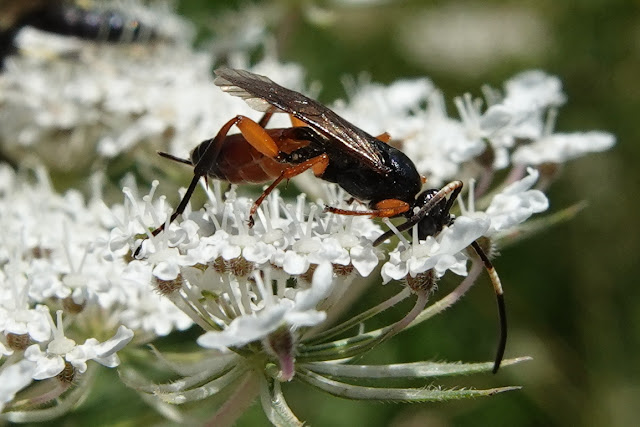 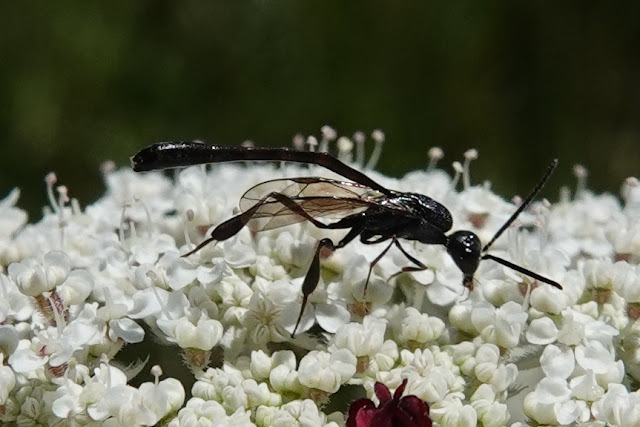 After seeing my very first Gymnosoma rotundatum on Monday, I was delighted to discover it at two more spots on the site today. It really is a very funky fly. 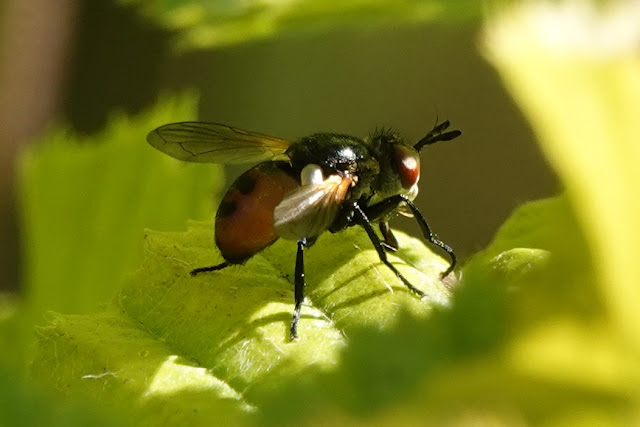 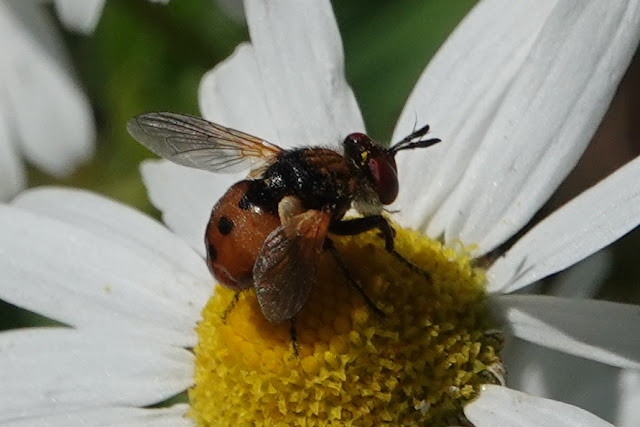 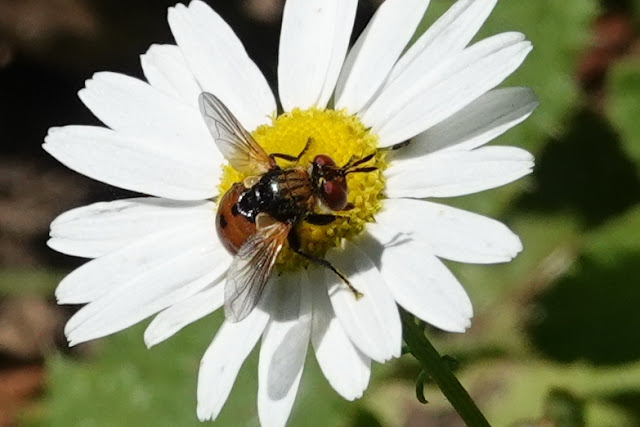 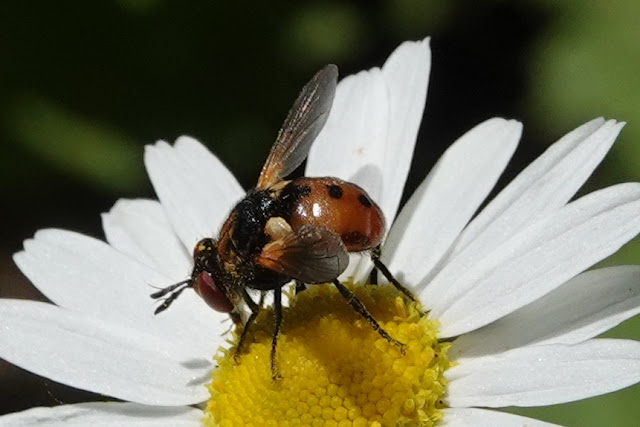 My route took me alongside the wheatfields where I found some Fat Hen in the margins amongst the Mugworts and there were some superb views both down the Medway and out the other way across the estuary towards Sheerness and the Docks and even the three 500foot oilrig towers currently moored out there. 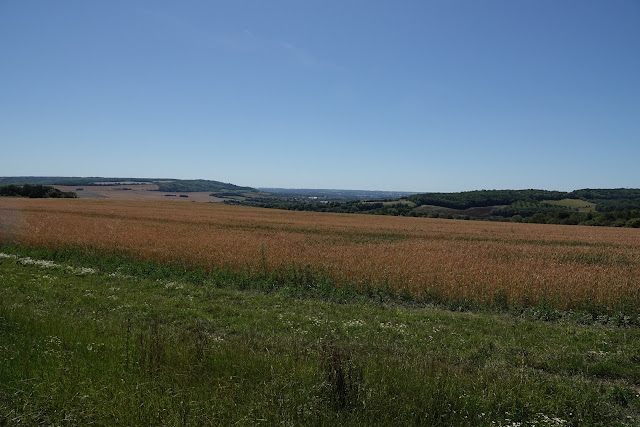 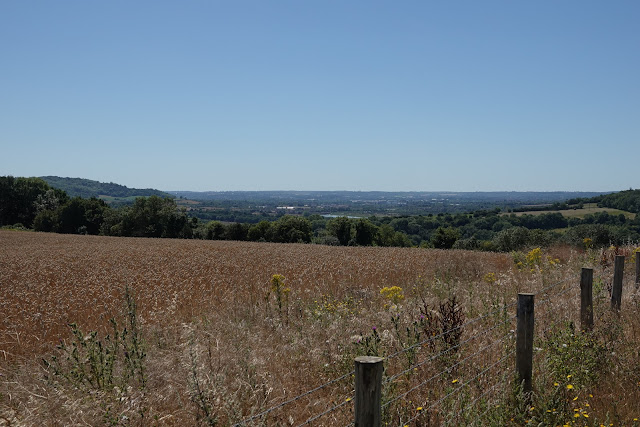 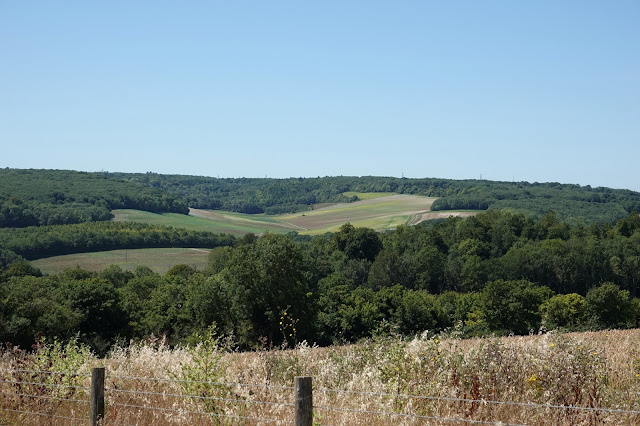 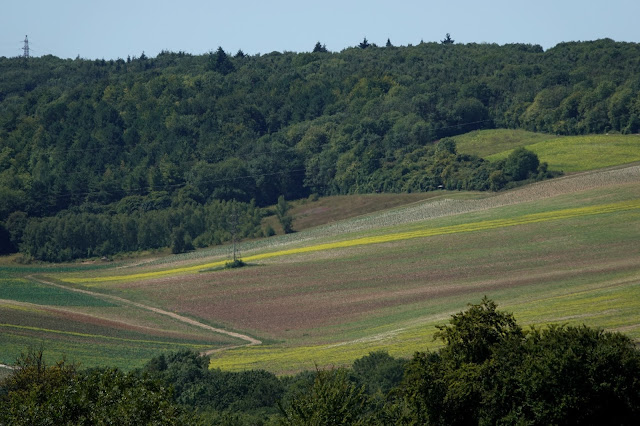 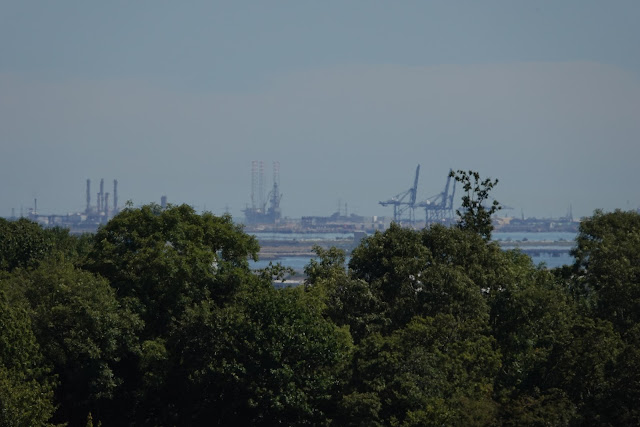 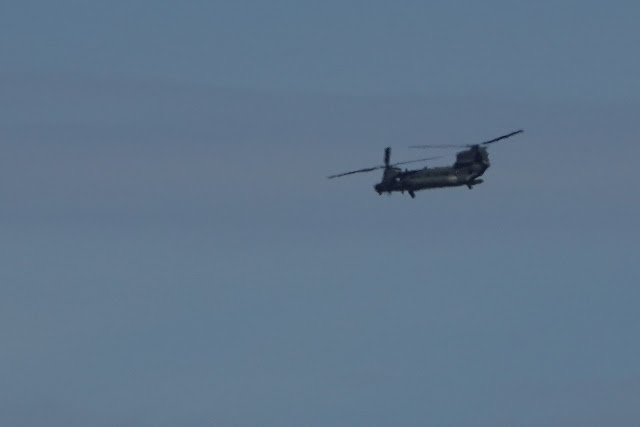 A final patch of Wild Carrot gave me the wondrously named Gasteruption jaculator with its ridiculous white tipped ovipositor, an Arge species of Sawfly and the most stunning little Ruby Tailed Wasp that I think falls into the Hedychrum niemelai or Hedychrum nobile aggregate. 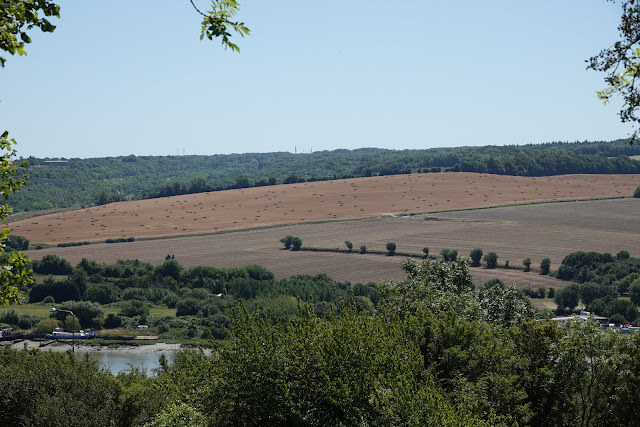 Every day is different out here and not a visit goes by without be discovering something new.  With the temperature pushing 30c I headed homewards.
Posted by Howard Vaughan at 14:24