Another day and more birding opportunities.  Sam and I headed down to Dungeness for the first time this year.  It was grey and overcast after the heavy rain of yesterday evening so I was hopeful that with a light breeze there might be some bird close in at the beach but when we got down there it was proper howling and although the visibility was great, the birds were practically non-existent on the sea with just a few Gannets and Terns in our watch.  To be honest it was too windy to stand up and the angle of wind meant that there was no shelter what so ever.

Swallows and Sand Martins flicked low and west over the sea and I saw the Harbour Porpoises appear for air on a few occasions but it really was not worth the discomfort so we retreated to the birdless lighthouse garden although I did suppress a Dunnock. Rock Samphire was in the final throws of going to seed and the Sea Cabbage looked great in clumps of glaucous green with a hint of pink on the frill while low growing clumps of Sea Campion and miniscule Devil’s Bit Scabious hugged the ground.


We retreated to the ARC car park and although I understand that the main hides were closed I was surprised to see the Hanson Hide still inaccessible and even the screen hide all boarded up so we resorted to sitting exposed in the wind with several other birders on the grass bank beyond it which thankfully did not disturb the birds which was good as the Glossy Ibis was feeding straight out on the island in front of us.

It was a very drab bird and not of my pictures suggest that it had any pigment in it whatsoever but the sky was leaden and the world was fairly monochrome.  It was nice to get a year tick after the disappointment of the seawatch. 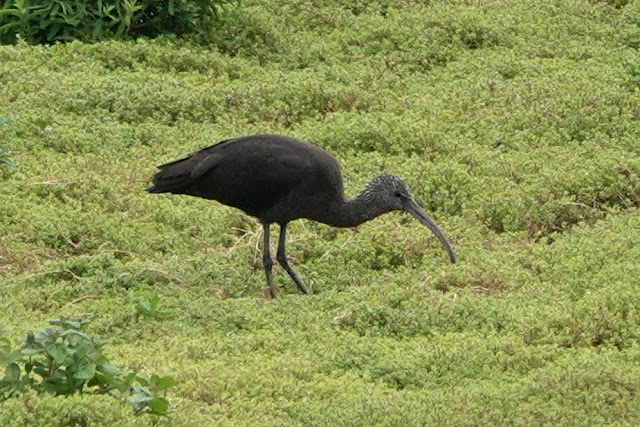 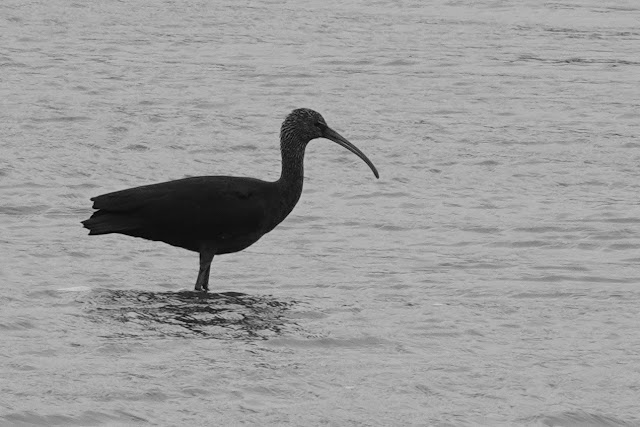 A Great White Egret became one of three seen and 130 Golden Plover were mostly out of view on the main island with the Lapwing but occasionally dreaded if a Marsh Harrier came through.


Scanning through the brown ducks produced Pintail and Wigeon and a lot of Gadwall and a rather crisply marked juvenile Garganey for the tally.  Three Ruff, a Dunlin and Common Sandpiper were seen and a group of 11 Black-tailed Godwits took to feeding with the Ibis.  Some were delightfully marked juveniles and were the first I had seen this season. Common and Sandwich Terns were milling about and the main pit was covered with a flickering mass of thousands of Sand Martins jinking back and forth like avian plankton as they stocked up before the sea crossing ahead of them.

Two Water Rails squealed and a sudden change in the tone of the Sand Martin calls shouted ‘Hobby!’ and sure enough a whippy scimitar scythed into the throng but they were already alerted and shooting skywards where they would have more chance of eluding their autumn nemisis. The sky was darkening again so we gave up and decided that a coffee was in order en route to Oare Marshes for the afternoon.

The wind was less at Oare and after lunch we had a look at the Swale with the last vestiges of mud visible but got distracted by the Little Egret prancing around under our noses that we did not see that Napoleon was there too!


He flew a short way and showed much as he did last Thursday.  Parties of Dunlin and Ringed Plover were pushed off and overhead onto the East Flood and a single Curlew Sandpiper was picked up on call as it joined them while Turnstones stayed put and scrimmaged amongst the seawweedy rocks. 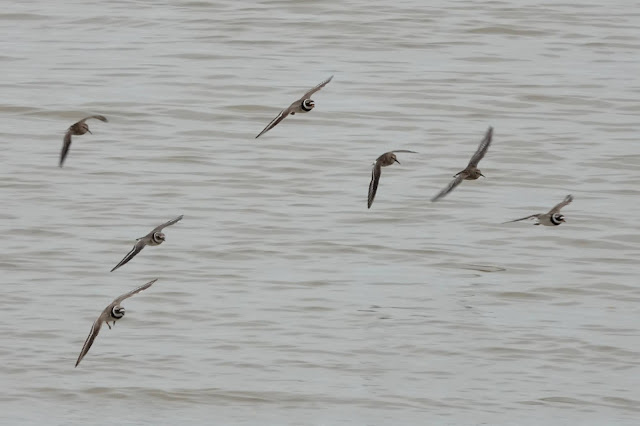 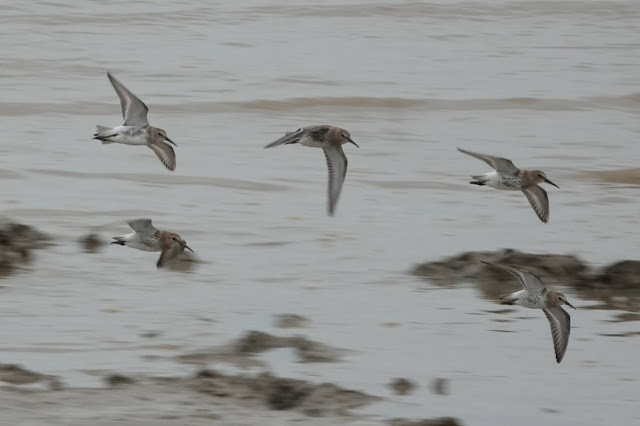 The Flood was a carpet of Black-tailed Godwits as usual with Knot, Avocets, Redshank and Dunlin amongst them but the bulk of the small waders had pitched up on the close island that once again was surrounded by water and wet mud.  At least eight peachy breasted juvenile Curlew Sandpipers were with them and my first Little Stint of the autumn tottered around close to us showing off those intricate feather insides and mantle braces.  If there had been some sunlight it would have glowed!

A male Peregrine made two unsuccessful attack sorties and even a juvenile Marsh Harrier did not cause the Godwits to budge much. 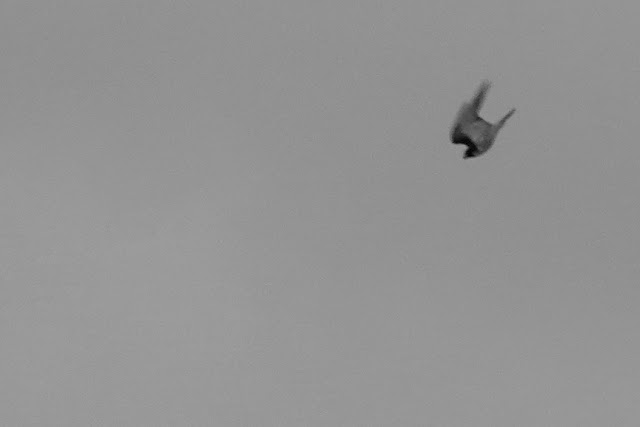 There was not a single Golden Plover present as we suspected that the flock would still be out at Shellness and that the American Golden Plover would be with it and just as we were about to leave the news came on that it was indeed on the otherside but the idea of nearly an hour circuit to get out there in the now increasing wind was not appealing so we bid our farewells and called it a day.
Posted by Howard Vaughan at 10:54