What's that coming over the hill? Is it a monster?

Back in the early spring a Lammergeier (wild bred from reintroduced parents in the French Alps) by the name of Vigo made its way to Brittany and then the Channel Islands and then popped up in the Midlands before being pinned down until quite late in September in the Peak District where it naturally drew an appreciative audience.  COVID aside I quite simply did not fancy the day drive up there and quietly put it to one side.

As September drew to a close she began to move south visiting Norfolk for an afternoon and then pitching up in the Lincolnshire and Cambridgeshire Fens for a few days where she hopped around fields and munched dead rabbits on roadsides! My two weeks quarantine after Lesvos ended on Saturday and I had a little plan to give in and visit Vigo if she had roosted in a roadside tree as usual.  She did not an I was thwarted and by Sunday afternoon she was over The Lodge in Bedfordshire and then was snapped on a phone over Tunbridge Wells on Monday.

I was actually beginning to wish I had just gone north. But yesterday she made it to the coast of East Sussex and spent the day patrolling the Beachy Head area and amazingly was seen to touch down for the night and as such Shaun H and I headed south at silly o’clock to ensure seeing her before she decided to get up and about for the day.

We had a good run down and parked up just outside Litlington and walked into the village as the sky lightened and up a steep chalk footpath to the designated spot from which to watch ‘the tree’.

Vigo  was instantly on view and we spent the next two and half hours watching her go about her morning ablutions whilst keeping an eye on the local corvids and Buzzards and even a jogger and her dog that passed directly beneath the tree. The light was very poor but the scopes gathered in the light and you could even see the gleam of her amber eyes. 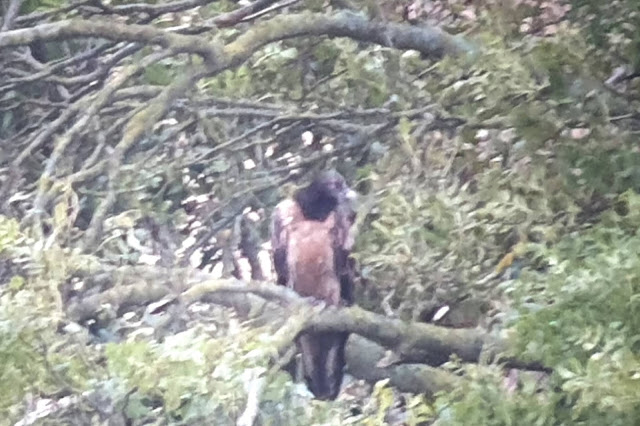 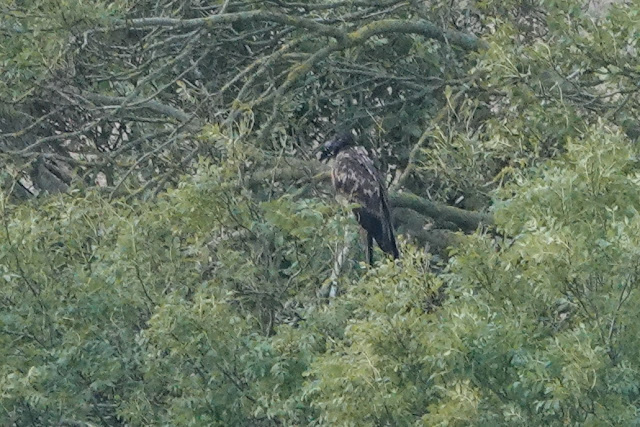 It was cold and dank but not a wasted time spent waiting for wings to be unfurled with vis mig going on all around us. There were not vast numbers of birds but a steady trickle of finches included Siskins, Redpolls, seven Brambling and five Crossbills. Meadow Pipits, alba Wagtails and Skylarks were ever present and a flock of Fieldfares headed west.  A female Merlin gave a Skylark a seriously good chase and only gave up when a Sparrowhawk got in on proceedings.

Way off on the other side of the Cuckmere was the car park where it had been watched from yesterday and a sizeable crowd were lined up on the ridge by the White Horse to stare at our tree in the hope the bird would fly.  There were over two miles away and when she did eventually drop off her Ash branch she stayed low before climbing up over a wood about half a mile east and drifted low north-east and out of sight.

She was as magnificent as you would expect in flight and this was how I wanted Shaun to see her.  It was his first Lammergeier and seeing her mobbed by tiny Rooks and Jackdaws was superb. Her tail is now fully re-grown and she used this rudder to glide and bank. 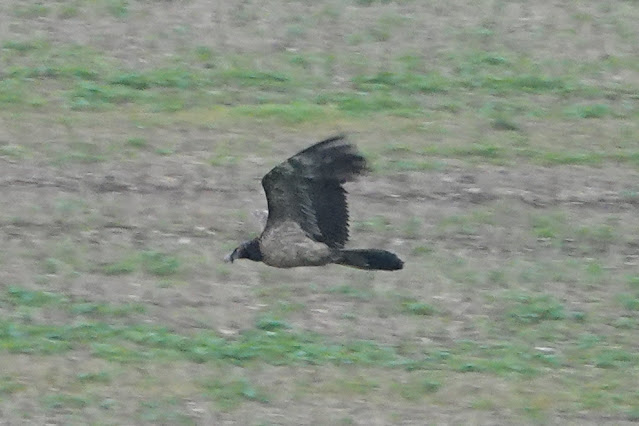 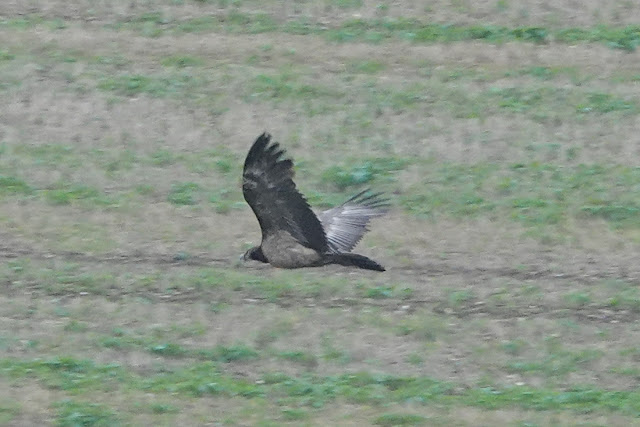 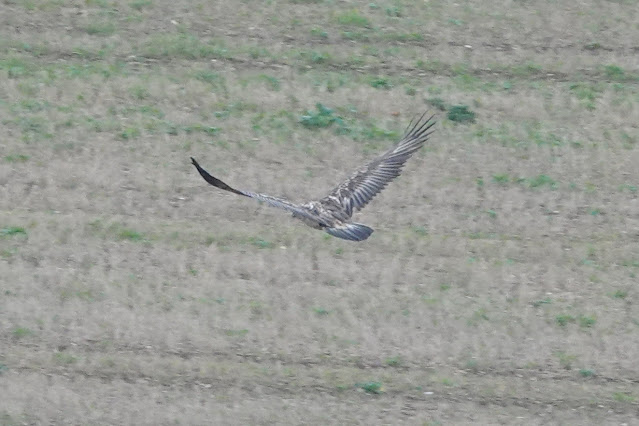 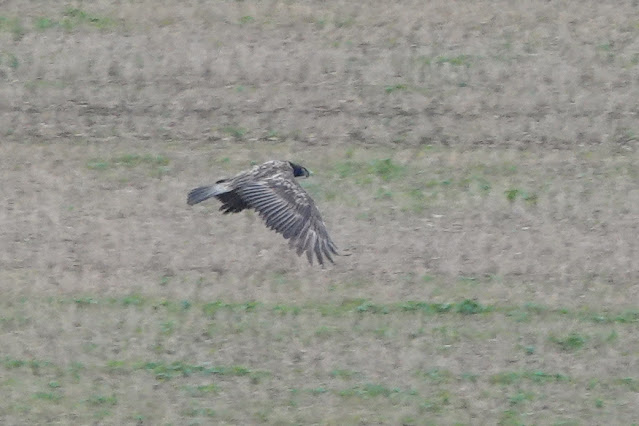 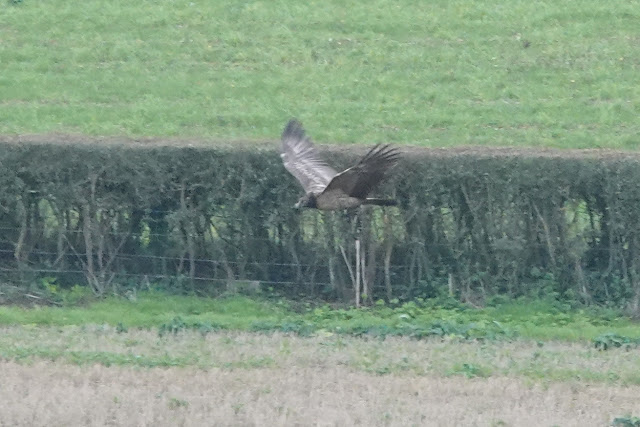 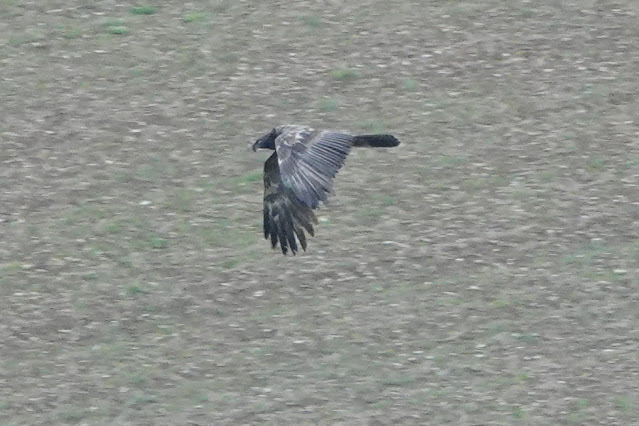 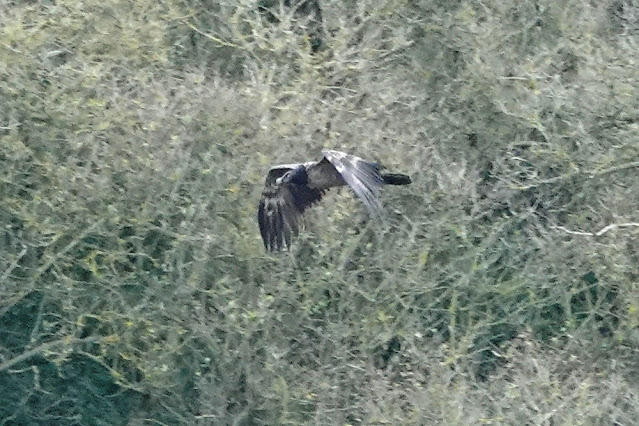 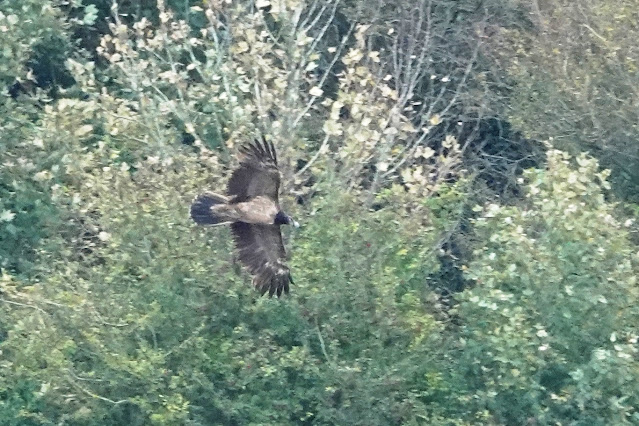 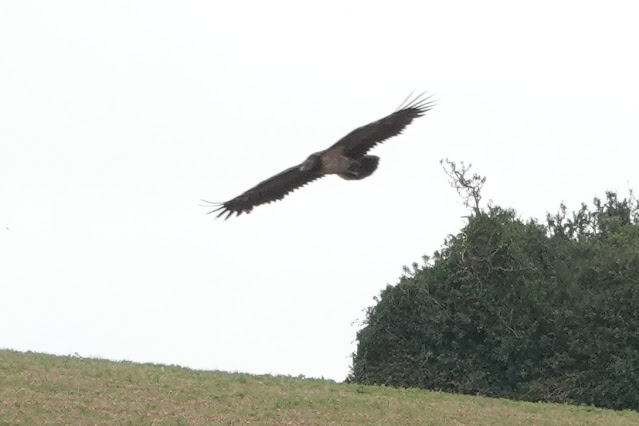 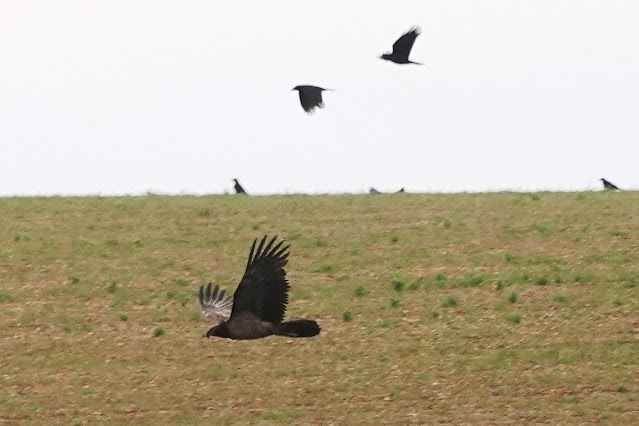 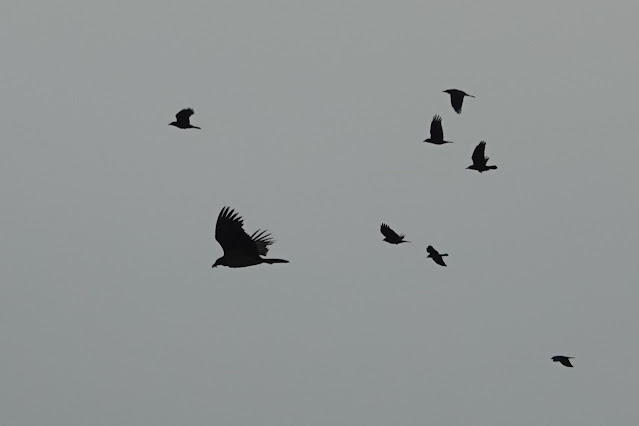 The small group of happy birders soon dispersed and we ambled back down the hill to the car finding Goldcrests, Chiffchaffs and two dapper little Firecrests in the roadside Sycamores and Elms.

There was time for a quick brew and then with nothing else to actively go for we poodled down the road to Birling Gap and spent a happy few hours ambling around the cliff top scrub between there and the Belle Tout lighthouse (where I did not see the Blue Rock thrush a few years ago). 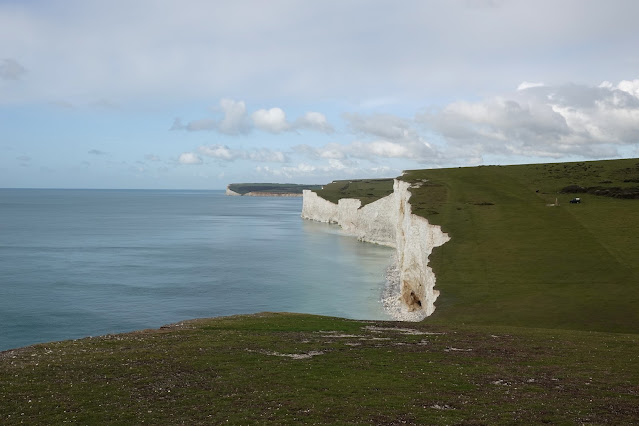 There was still plenty of movement going on with Siskins and Redpolls constantly calling overhead along with many Meadow Pipits and more alba Wags. It was quite tricky to work out what the birds were doing as it felt like they were coming in off but I actually suspect that they had been coasting and were remaking landfall at the headland. Song Thrushes and Blackbirds were seen and we both saw brief independent Ring Ouzels.  Corn Buntings jangled and Robins ticked away and the gardens screamed out to be full of Bluetails and stripy Phylloscs but we could only find Goldcrests and Chiffchaffs.  Stonechats were liberally sprinkled around and we hoped for Dartford Warbler and Shaun then found one while a Great Spotted Woodpecker dropped out of the blue into the gorse. 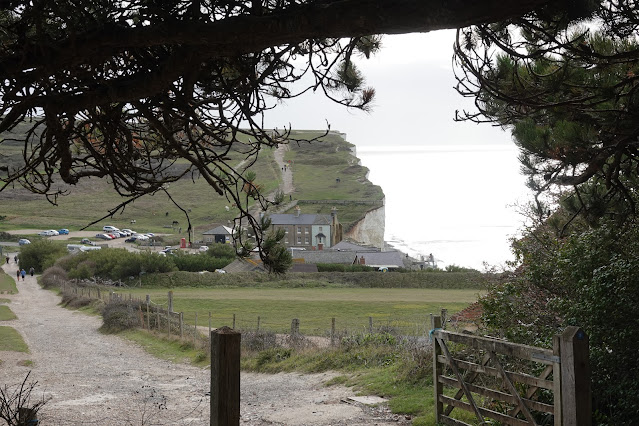 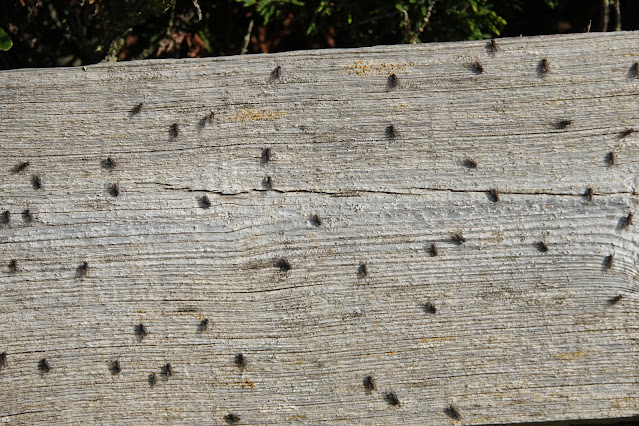 Unlike the other finches there was a distinct east bound passage of Linnets and Goldfinches and the Swallows and House Martins were heading that way too while a fine male Black Redstart posed on top of the toilet block. Two Peregrines, Buzzards, Sparrowhawk and Kestrel were found in the raptor department.

The wind was getting up by the time we were down the Belle Tout end and we had both joked about Vigo paying us a visit while we were here to which Shaun said ‘There she is!’

She was well inland to start with but over the next hour she came closer to the cliff top and almost headed out but turned back but on her second attempt she had gained far more height and we followed her up into the low grey cloud way out over the sea. Had she really gone and made the daring sea crossing? No – five minutes later she dropped back out of the cloud base and cruised back inland again. 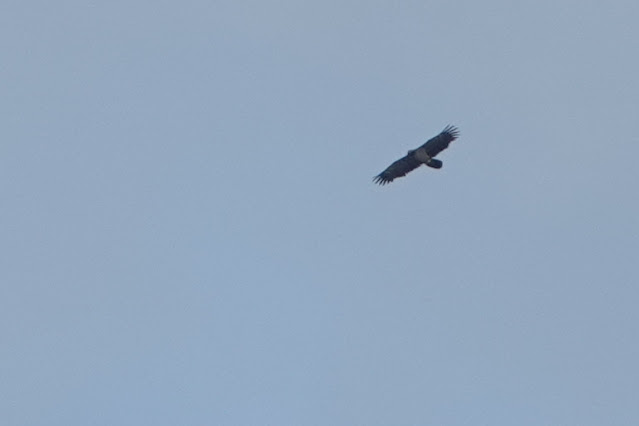 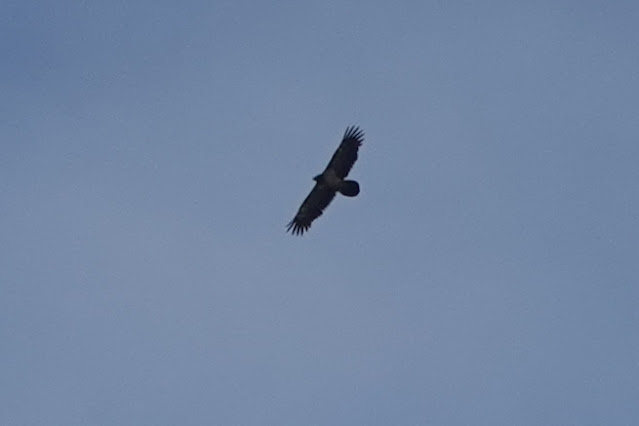 Shaun and I got as many of the other visitors (only one birding lady who was very, very happy) there onto her during these circuits and most had seen her on the news in recent days and were awestruck by this nine foot harmless scavenger spiralling in the blue and grey.

It was actually a very strange feature of the whole day – nice people. Everyone said hello and asked what we had seen or were looking for or wanted to talk about the Vulture, Swallow migration or the weather and such like. Some sullen students came past but each said afternoon and at least two were definitely aliens with the comments:  ‘ I hear that McDonalds coffee is quite good’  and ‘ I heard that too’ the other girl replied. Umm – young people who have not partaken of the Golden Arches? How wondrously odd!

With one last effort to get a frantic birder on to Vigo we left Beachy Head and headed homewards not knowing that just an hour later she would gain height one last time and finally disappear out to sea towards the country of her birth.

The journey home was smooth and trouble free and although we were both tired it was fabulous to finally be part of the epic journey of this magnificent creature that has been shared by so many. It would be great to think that they story does not end there and that she made it safely across the Channel with that wind behind her and may eventually return to the mountains of her birth.