It has been a grey week end the incentive to get out for an early winter walk has waned somewhat so I have continued to busy myself in the garden with the completion of the new greenhouse that was started the previous weekend.

It is now securely in place on the upper decking that we had to increase the width of by screwing down the remains of my old IKEA wardrobes that have been sitting out the front of my house since May wiring in vain for my local recycling tip to re-open. They worked a treat and the white surface actually reflects even more light into the structure so a win on several counts.  It was quickly filled with plants for the winter that would otherwise have had to find a spot on the bathroom windowsill or take their chances under a shrub in the garden. 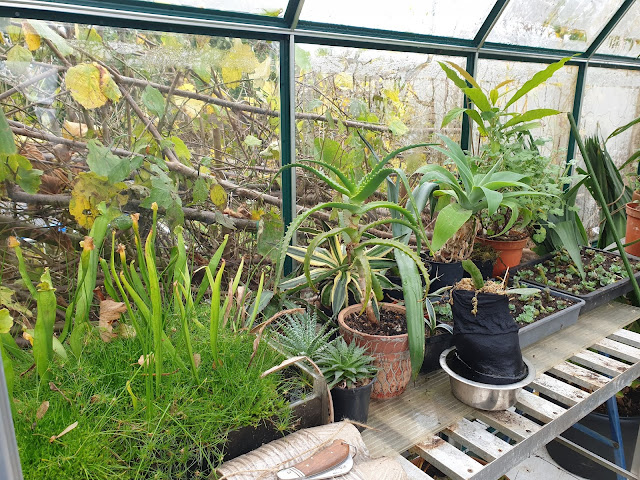 I lowered the section of Hazel, Dogwood and Maple hedge alongside it to allow in more light and have also therefore afforded myself a little more airspace in which to look for additions to my Lockdown List which now stands at 86 since the 23rd March.

The wooden arch that my Dad gave me about 16 years ago has also finally gone up and already has that weathered rustic look from having been moved around the plot on a regular basis as I dithered how and where to put it up.

There is just the lower deck to rebuild now and hopefully we shall make a start this weekend which will open up the garden further up opposite the greenhouse into a useable area once again.

Goldcrests and Robins have been my constant companions and the Great Spotted Woodpecker that I have heard several times recently at last bounced into the Sycamores at the back. The House Sparrow flock is spending plenty of time on the feeders and a Coal Tit has been in with the other regular species but I would love them to bring in a Nuthatch if the weather gets properly wintery.

Skylark and Siskin have been heard overhead along with some night-time Redwings but it is just too mild and westerly for any proper movement of other passerines or Lapwings.

A big fat Queen Red-tailed Bumblebee was checking all the Ivy for any last flowers and a Twin Spot Centurion - a Soldier Fly was my first good in the greenhouse insect.

On Tuesday I walked into town on some postal errands and on the way back I had an idea about making up a photographic montage from the myriad of different autumnal tree and shrug leaves that I have in the garden and the rest of the day was spent creating and selection of different leafy combinations. 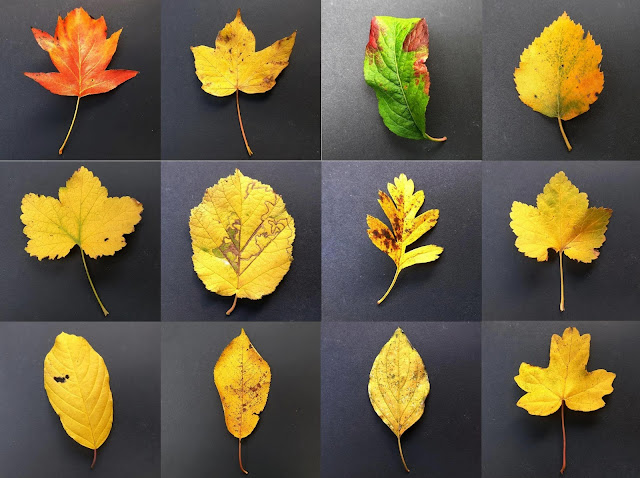 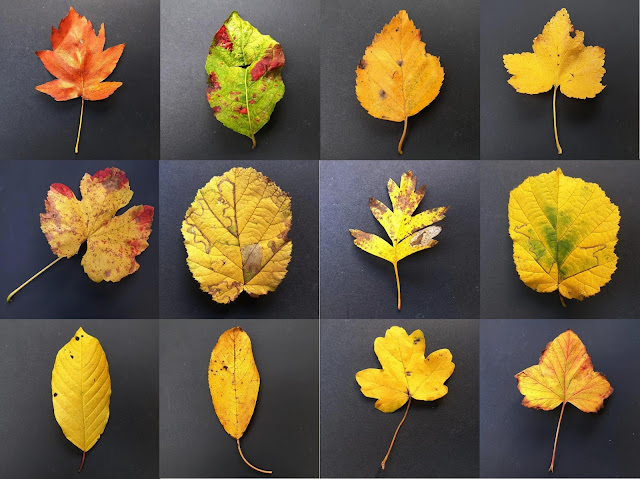 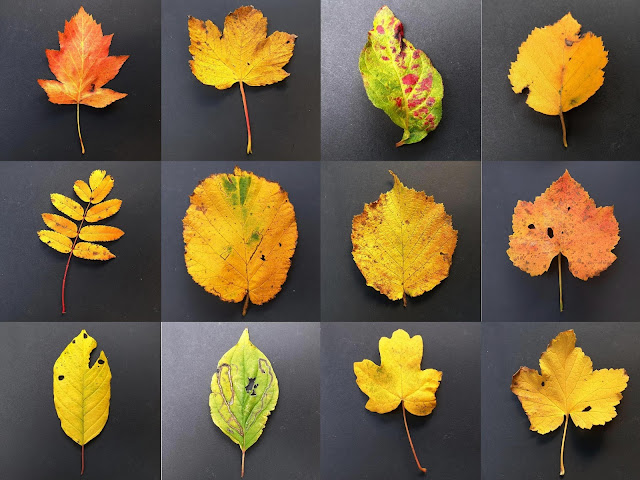 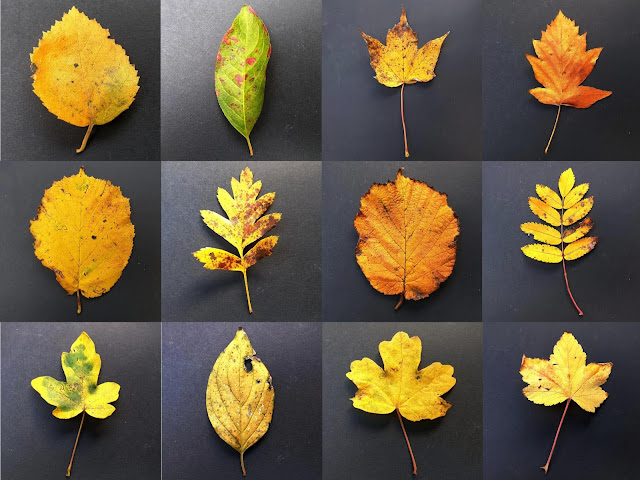 Yesterday was clear and bright – albeit for just a few hours and I took myself down to Bromhey Farm. A lengthy walk was not on my agenda but a leisurely couple hours well spent scanning the vast marsh that I visited more closely last week, from the two view points.

On that walk we saw just two Kestrels and not one other bird of prey but thankfully things were different this time and I picked up at least four Buzzards loafing around on posts, a fine male Peregrine plucking a Starling, two Kestrels and a Sparrowhawk and a duo of Marsh Harriers – an immature male and adult female.

I scanned the fields for the three Pink-feet that had been with the Greylags but had no joy but I did pick up 11 Egyptian, a host of Canadas and four surprise Dark-bellied Brent Geese. A Great White Egret preening on a ditch levee was possibly my first for down here and may rank as my most distant image taken of one ever! 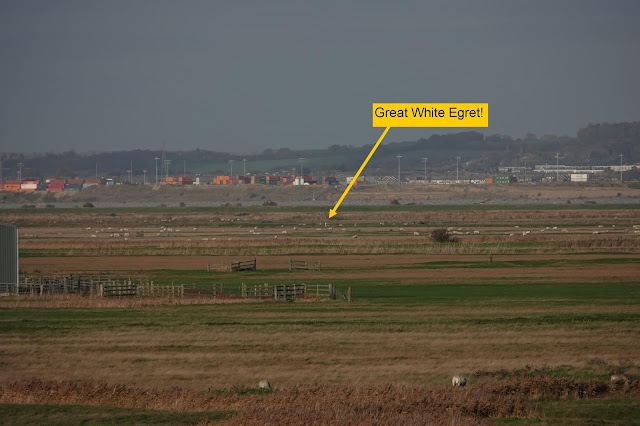 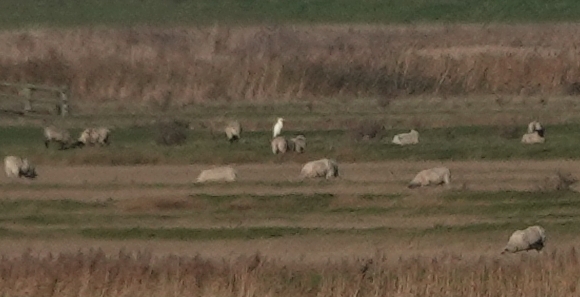 Sixty Lapwing drifted in from near the Thames and two Ruff were tagging along while a quad bike spooked successive flocks of zig-zagging Snipe as he traversed between sheep fields. Skylarks and what were probably flock of Linnet mounded around across the fields.  Karl commented last week that it must be one of the biggest uninhabited open areas in the south east. The Black Barn farm at Cliffe way to the west was the only actual lived in house I could see in the whole vista once down from the gravel ridge on which I stood.

Rooks were everywhere and gunfire from inland behind me sent more overhead making a wondrously weird array of calls. A flight of forty Mallard swiftly followed them out onto the marsh where the joined a group of grazing Wigeon.

With the wind increasing, I ambled back passing Redpolls and Siskins overhead as I did so and hearing a Firecrest and three Goldcrests in the scrub along with a calling Chiffchaff and three skittish Redwings.

I had a nice chat to a newly repatriated couple who had seen the Pinkfeet before getting distracted by the numerous Stomoxys calcitrans that were dotted all over my car trying to glean some extra warmth on what was already a very mild day.  Thankfully this species – the Stable Fly –seems to leave me alone in the UK but it can be a real pain in Lesvos where it is an accomplished ankle biter.  If you would like to see and have a read about the amazing drilling equipment of this innocuous looking little Muscid then have a read of Erica Mcalister’s amazing Secret Life of Flies! 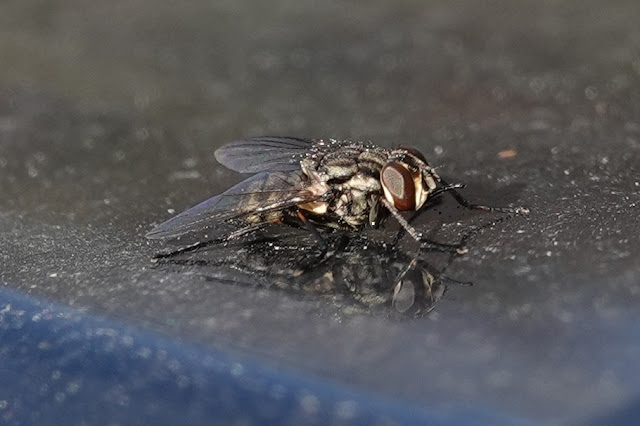 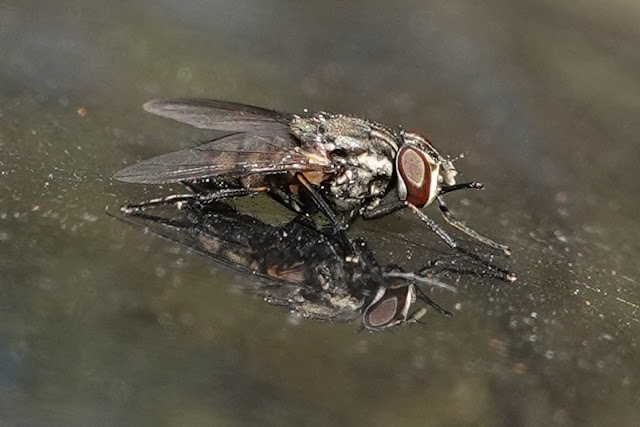 And so to today – grey, dry and breezy they said. Well that is not quite what actually happened.  I had arranged to meet up with Steve Cullum for stroll along one of his routes from his Meopham home and despite the spits and spots we still headed out across the fields toward Sole Street.

The field either side of the starting footpath was a re growing Rape field with Peas also showing through and flowering but there were also big signs up saying that several hundred new homes are likely to be built across this area and the Skylarks that were singing and dancing up in the gloom probably do not have much longer to enjoy this open – but not very wild – space.

Spindle and Privet were fruiting in the hedge but it was unsurprisingly quiet as the spots turned to blowing drizzle. The copses were walked along side were very quiet although I did hear Chiffchaff and Lesser Redpoll.  Periwinkle covered the ground and the Bramble leaves were an amazing colour.  It was a pity that the ones in my garden were still so green or I would have used them in my montage. 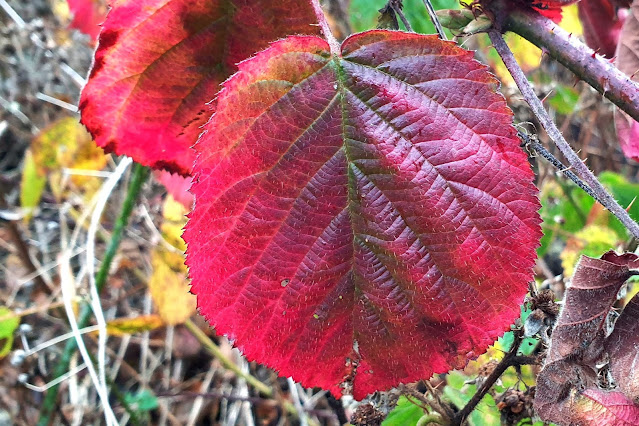 We crossed the railway three times before taking a footpath through the apple orchards. Rather oddly the first ones were went through were devoid of even one windfall. There was not an apple in sight and as a consequence not one bird either but the next was far better. 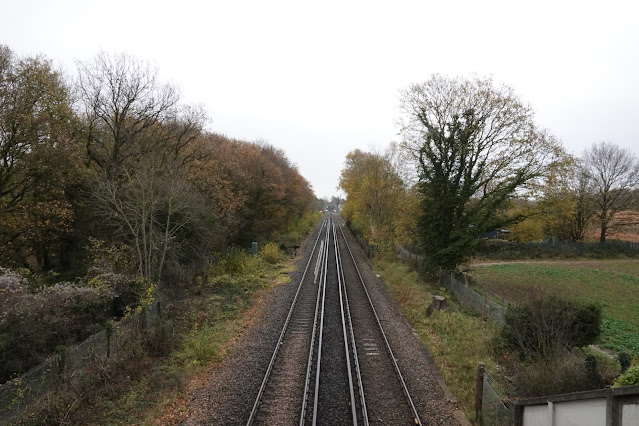 There were not many on the ground and a few still on the bough but there were birds to be seen with a few Redwing and chacking grey rumped Fieldfares, noisy Starlings and a sizeable flock of Chaffinches and Goldfinches but I suspect that we need some proper winter weather to increase these numbers any further. 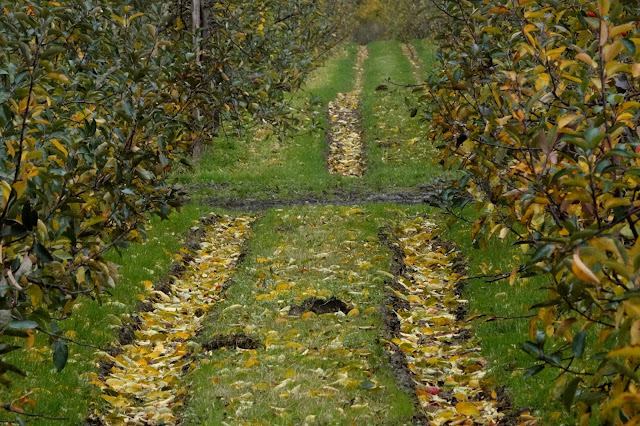 Crab Apples had been planted periodically in the lines and were still laden down with ruby red fruit.  these are planted amongst the comercial varieties as universal pollinators and it was also pleasing to find bamboo bee houses along the lines too. 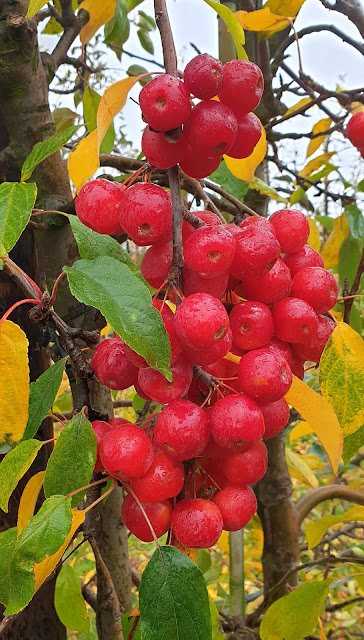 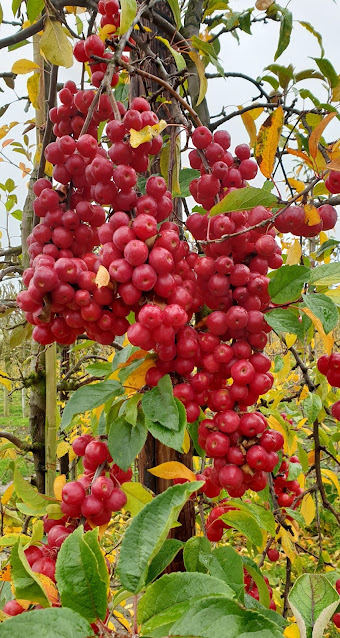 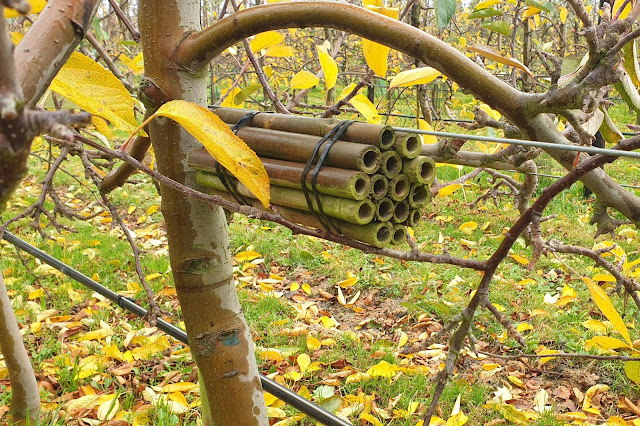 It was now raining persistently as we started on the loop back – there was no point in heading out much further.

A small paddock with relaxing Rams saw them taking shelter under a large Beech and they ignored us we moved through.  Crossing Round Street into White Post Lane saw me on familiar ground as this is part of my wiggle route home when the A2 is stuffed and I commented that the combination of Holly, Ivy and Pines looked good for Firecrest and then promptly heard one but at that point the sky decided to release all its stored up frustrations and you could hear almost nothing but the hammering of rain on your hood. I stood under a tree and could hear two birds calling but there was no hope whatsoever of seeing them and so we pushed on only to be greeted by the scariest bit of topiary I am ever likely to see.

Some Winter Heliotrope was flowering in the verge and there was even a single flower of Field Scabious hoping to attract some late pollinators!  I found a clump of Stinking Iris and with some newly aquired knowledge to hand I tore a leave in half and had a sniff and much to my delight it did indeed smell of Beef and Onion Crisps! A true - 'Well I never!' moment.

A Mistle Thrush greeted us on the final bit of the route as it watched us from a pylon. I don’t think Steve has seen too many around here. Ring-necked Parakeets circled the houses on the last stretch and I think it will not be too long before they descend into the Medway basin.

This was the first proper wet walk in eight months of ambling the north Kent countryside and although it was nice to get out and explore any area that I had only previously driven though, I was also keen to get home and dry out. Perhaps we shall have another attempt on a crisp winter’s day? 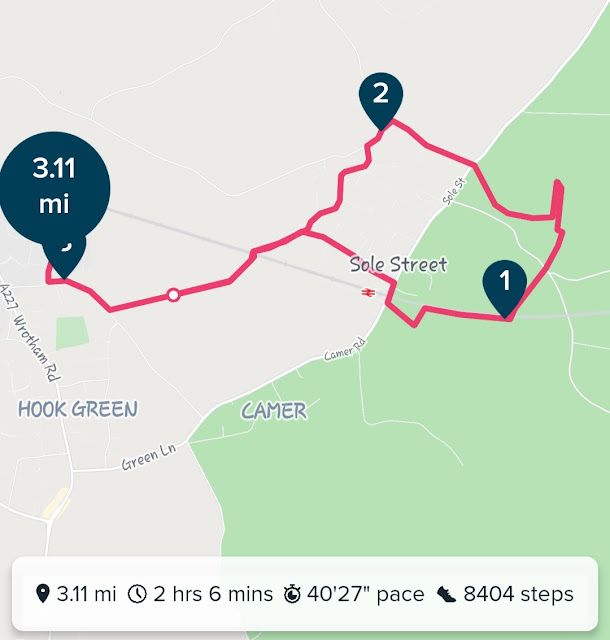