After a lay in and lazy breakfast it was time to head east around the Bay taking in the Papiana Scops Owls again on the way.

A brief stop at the north east KSP gave wondrously appalling views of four Shoveler, three Wigeon and a drake Gadwall making it two new island birds so far but I could not find the Spoonbills. Eleven Gull-billed Terns were ample compensation but there were no waders at all bar Avocets and the levels will need to drop to bring anything in for a rest over on the long journey north.

A small group of Flamingos showed very close to the road at Mesa and six Ruddy Shelducks loafed about but the wind was whistling through and I was loath to get out and have a scan round! 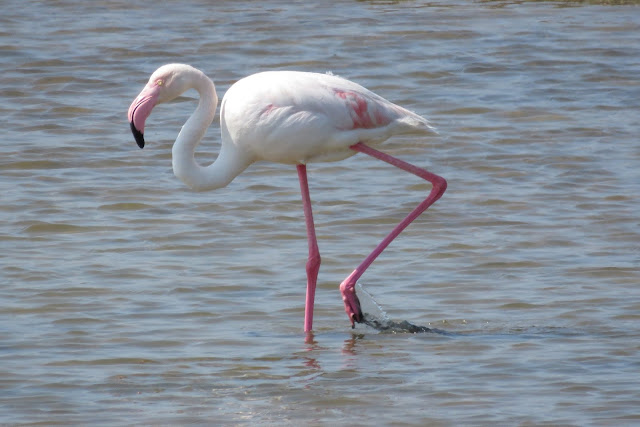 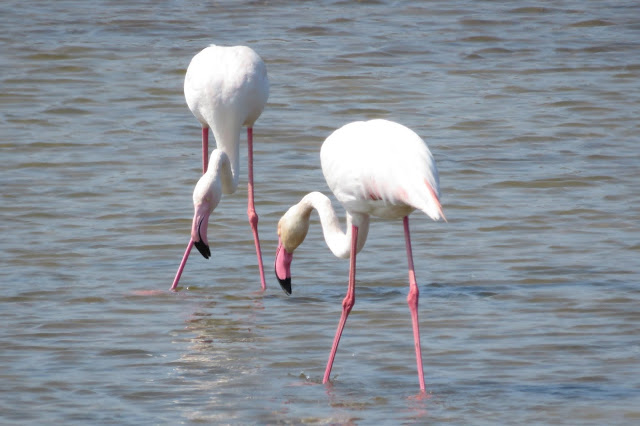 A short Flamingo video by Andrea...

On to Achladeri, stopping first at the bridge for a little walk up river with the sound of Nightingales, Eastern Subalpine and Olivaceous Warblers chattering from the bushes. Common Swifts hawked the ridge and Short-toed Treecreepers thinly sang from the pines. Out of the breeze it was actually pleasant in the sunshine but although the shorts were out, the arms were still covered against the chill. A pack of enthusiastic curs stymied any further adventuring and I returned to the car with a tiny Stripe-necked Terrapin in hand that was sitting in the middle of the path looking seriously fed up with its short life so far. I introduced him to the river where he energetically paddled off but undoubtedly still looking like he had just sucked a lemon...


Achladeri itself was mine alone which was nice but the pesky Kruper's Nuthatches were proving elusive and had taken a vow of silence but a persistent tapping eventually led me to a pair foraging in a pine. He was feeding her so I did not think they are too far into the breeding cycle yet. A problematical season lay ahead for many a visiting birder. 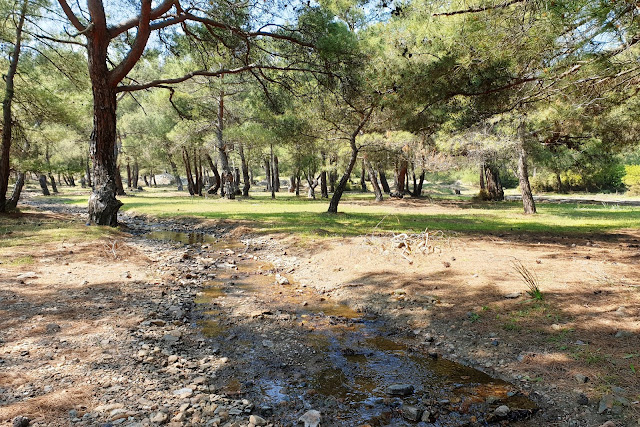 Short-toed Treecreepers were everywhere and already feeding fledged young and Serins and Chaffinches were coming down to drink in the numerous streamlets that crisscrossed the woods. I did not hear a Woodlark or see a single Shrike but a couple of silent skulky Tree Pipits flitted ahead of me and a pair of Black-eared Wheatears were nesting in the white building.A couple of Hawkers were up and down the road and I eventually got a good enough view to identify them as Vagrant Emperors.

The Serins were singing up and down the cypress rows beyond Achladeri with Chaffinches and Greenfinches joining in the with the general finchyness while the Poppy fields either side were only just beginning to bloom. Common Sandpipers were seen along the track towards Skala Vasilikon and the poppies here were a little more advanced but there were no passerines so I turned round and retraced our steps.

It was even colder up at the Raptor Watchpoint above Kalloni whenever the sun hid behind the clouds but I persevered and collected most of the expected species including Cirl and Cretzschmar's Buntings, Eastern Subalpine and Orphean Warblers, Rock Nuthatch and a female Goshawk and two Buzzards. A male Sardinian Warbler was an unexpected bonus as it churred and rattled at a singing Subalp.

There were no Scops Owls at Soumaria and after a pit stop at the Pela we headed for Metochi.
The lake underwent some over zealous habitat management during the late winter that completely denuded the southern end. It will all grow back but at the moment only the top quarter was likely to hold any creeping Crakes and herons. Thankfully I did indeed find two females and a slaty male Little Crake within a few minutes but the only heron was a snaky necked Purple in a field just before the lake.


A single drake Mallard lurked in the reeds and Little Grebes, Coots and Moorhens seem unaffected by the current habitat changes.


The rest of the circuit was pretty quiet with nothing on the rocky slope at all and only two Woodchats and a single Masked Shrike seen in the groves. However, a Sombre Tit carrying food was a bonus and a Wood Warbler, Blackcap and Whitethroat were seen in the elms.
A female Marsh Harrier and a cold plumaged female Hen Harrier were seen on the drive out and the first Hoopoe flopped across the road.

On to the Tsiknias were a walk down to the river mouth afforded great views of six pink flushed Slender-billed Gulls, with two 1st summer Black-headed Gulls,  two Gull-billed Terns and six Sandwich Terns for company on the end sand bar.

Stone Curlews called from the adjacent beach and a Great Reed Warbler foraged noisily in a Tamerisk while a fine Purple Heron attempted to remain invisible in the little 'shed garden' with a dozen yapping dogs and hissing cats trying to get to us in the car and completely oblivious to the cautious heron just behind them.  Four Squaccos appeared magically along the river bank beach and Little Ringed Plovers and a Fox were also seen.

The temperature was plummeting and dinner beckoned to be followed once again by a late session overlooking the Kallonis Pool. It was Heron Central again with the same cast as yesterday becoming active as the light fell. A female Little Crake popped out and an immature Spoonbill was added to the list while over 500 Swifts descended in a screaming mass to whirl amongst the Sand Martins and Swallows. My hands were frozen so I called it a night but not before four Starlings came in for a few circuits before heading west.

The bats told me it was time to call it a night...