The weather forecast was not great when I arose this morning with increasing to gale force winds and rain by the afternoon. Now, this does not really help with my general reluctance to venture out into the countryside with my birding gear.

However, I have to start somewhere and so after metaphorically kicking myself out of the front door, I packed up my gear and headed down to RSPB Cilffe Pools with the determination to have a good long walk regardless of the weather or even birds.

I parked in the deserted car park and ambled back up towards the main gate where all the local dog walkers were lazily parked at jaunty angles so as not to have to walk another hundred yards and struck out towards the river on the raised bund.

I did toy with walking down the access road alongside for a close look at the Alpha Pool but the construction traffic was very heavy and I would have surely been asked to leave.  This meant that I was further away from the water than I would have liked and only had gaps between the Hawthorns to scan for interesting Grebes.  Great Crested and Little were liberally dotted about but I could not find the Black-necked but was very pleased when the Red-necked flew into view and plonked itself down.  I suspect that a Sunday approach is necessary for closer views.

It was very quiet down to the Flamingo Pool where, despite the low tide, there were several thousand Lapwing and about 400 Golden Plover roosting up on the huge sandy margins while rafts of Wigeon and Gadwall upended for weed.  The birds were very skittish and regularly took flight in swirling dreaded of black, white and gold but of the perpetrator of such panic there was no sign and the nonchalant Buzzard chilling on a post did not seem to bother them at all. 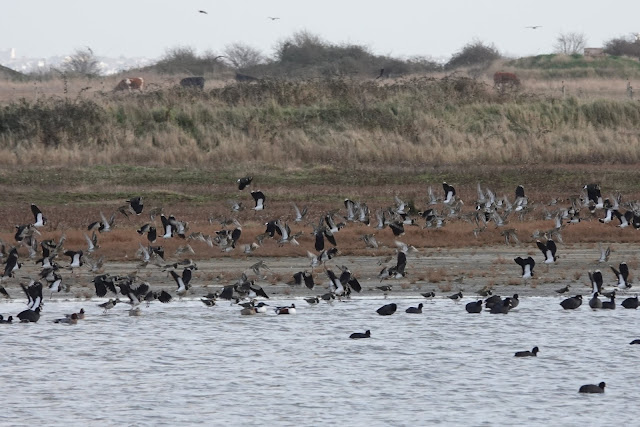 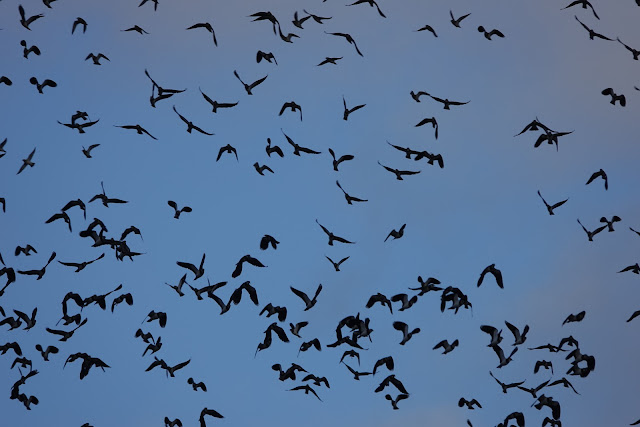 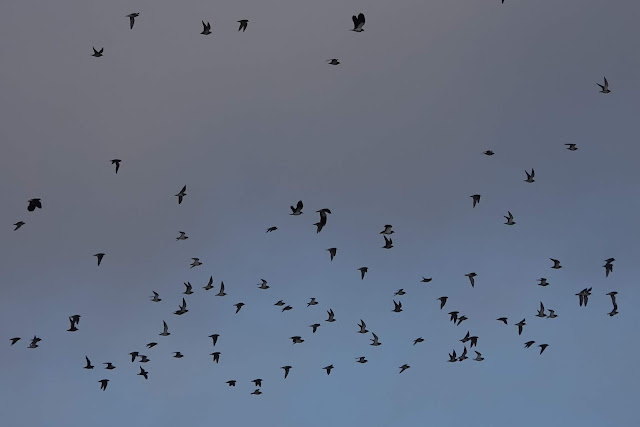 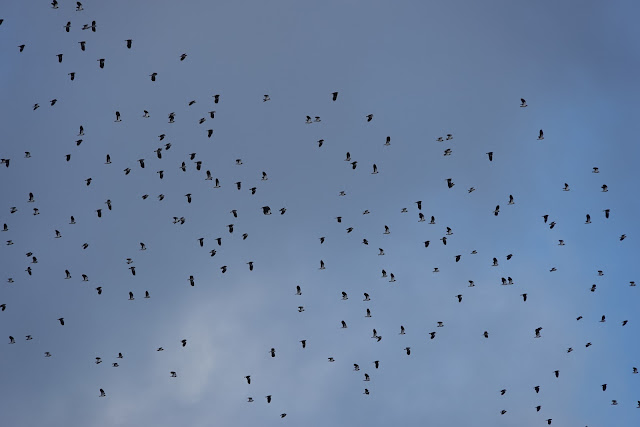 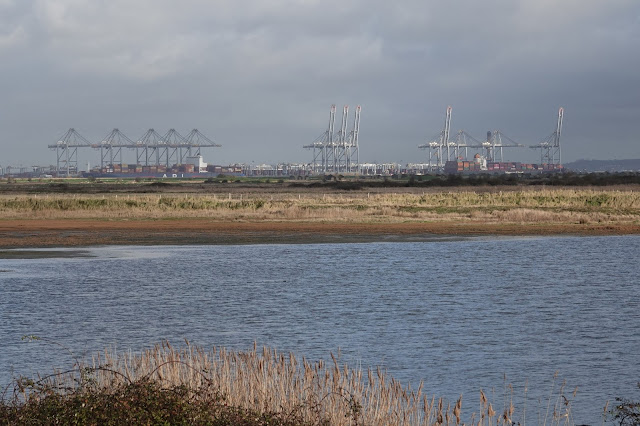 A Greenshank and two Spotted Redshanks rested on the closer edge and a noisy Little Egret spooked two Kingfishers that had been sitting invisibly in front of me below the bank.

Down at the Thames it was sunnier on the Essex side and I reckoned about a thousand Avocet gleamed in one snaky ribbon of white along the tide line while thousands of Dunlin and a scattering of Knot, Bar-tailed Godwits, Curlew, Grey Plover and Ringed Plover could be seen between Coalhouse Fort and Mucking.  I could not find any Black-tailed Godwits though. 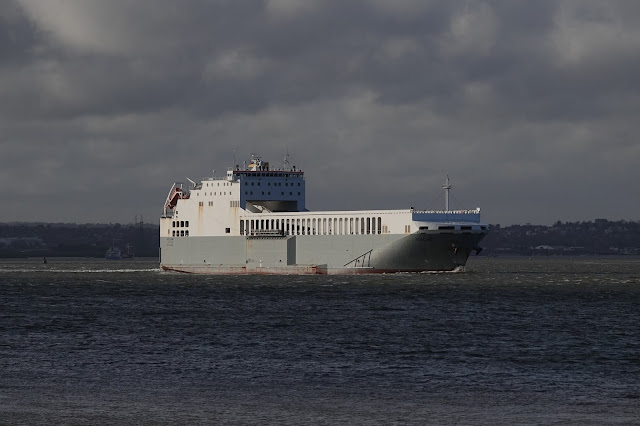 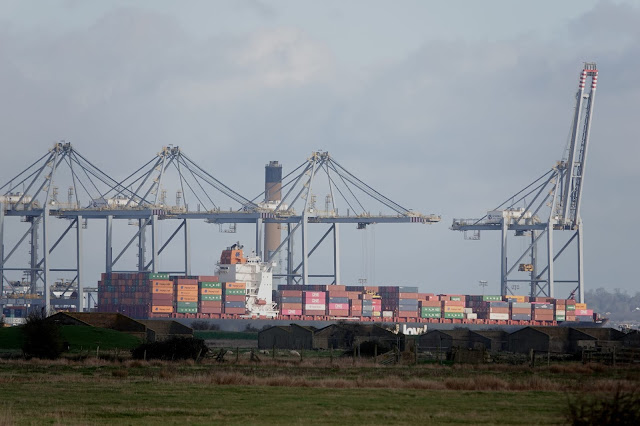 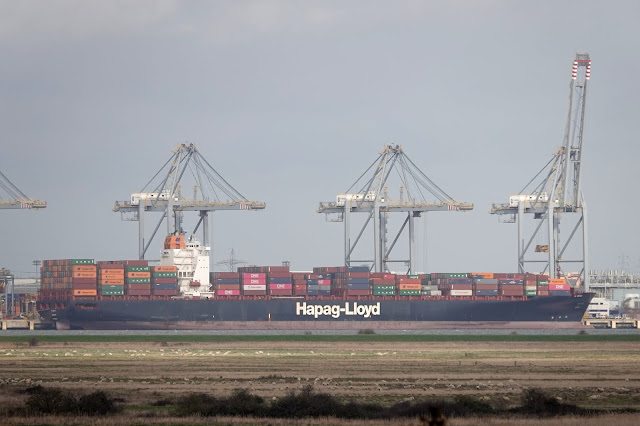 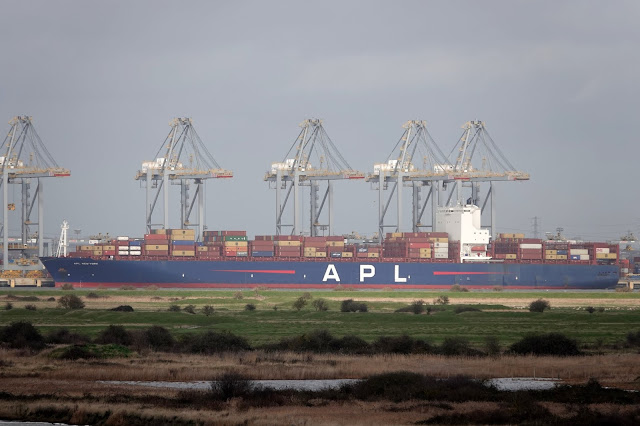 A few Skylarks and Meadow Pipits bumbled around but ten Linnets were all I found and a single Rock Pipit zipped down into a creek. Coming back off the river wall I began my approach to the Black Barn and its already audible hounds. Two male and female Stonechat adorned the fenceline in the ever increasing wind and a Reed Bunting became my first of the walk. Out near the old military training area I could see Stock Doves milling around and Starlings, Rooks and more Skylarks were on the pastures. 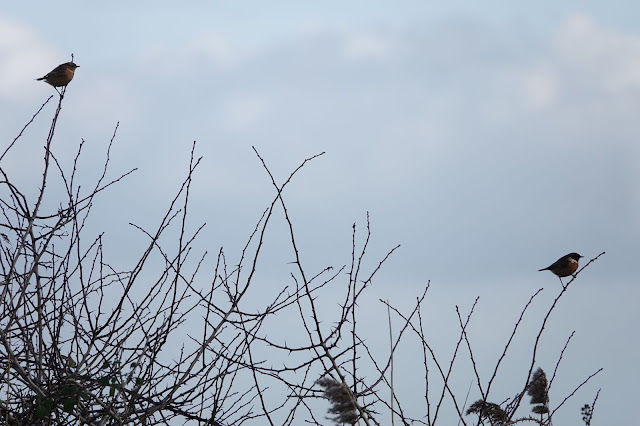 A couple of goose calls and my eyes were skyward just as I encountered the only other two birders of the walk and 14 quick flying Russian White-fronts battled their way west in a straggly line with belly bars and white blazes showing well in the temporary good light. 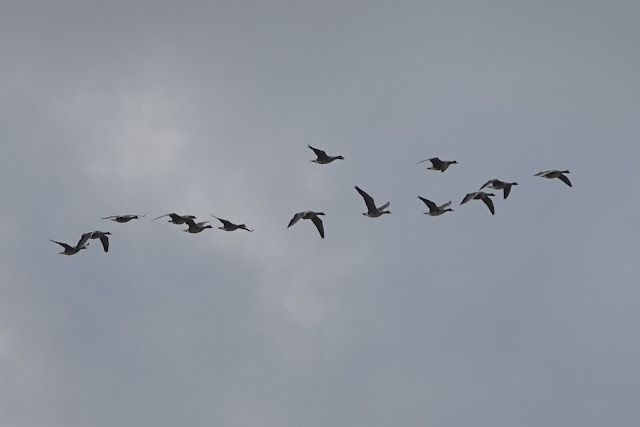 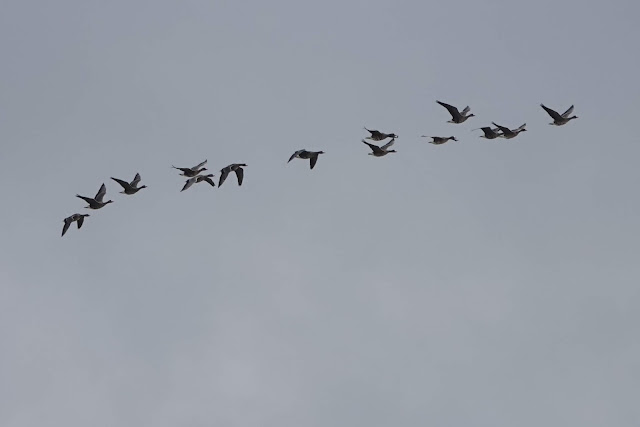 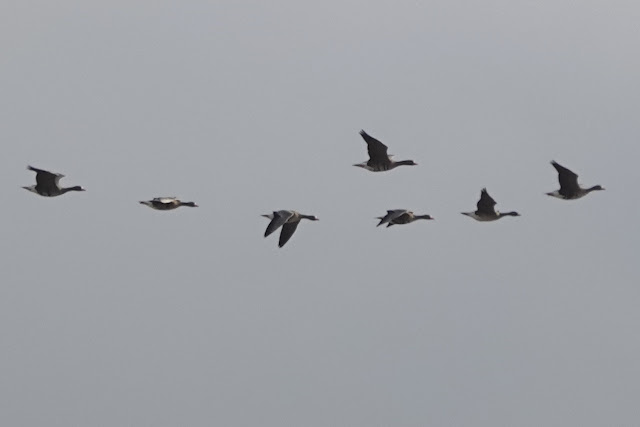 Over the Black Barn Pool there were more unsettled Lapwings and large rafts of agitated Teal, Wigeon and Mallard with a few Pintail thrown in while the closer two pools had plenty of feeding Shoveler.  At last a Marsh Harrier appeared, to take responsibility for all the disturbance as she deliberately flushed the smaller ducks with the intent of a late breakfast. A male soon arrived and seemed to be focusing on the Lapwings but neither were successful. 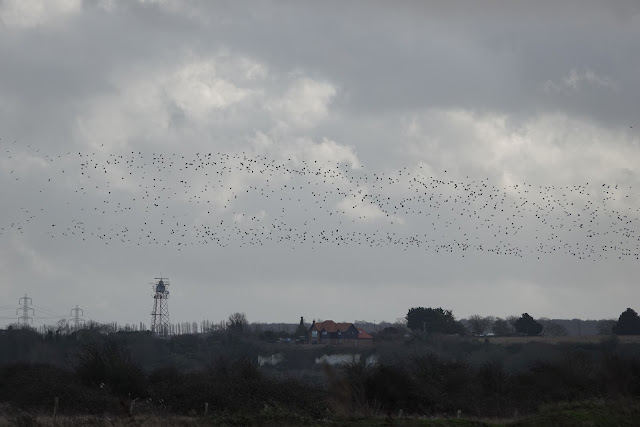 My route back past the Radar Pool added 150 Pochard, 20 Tufted Ducks and three pair of Goldeneye to the list along with plenty more Little and Great Crested Grebes, four more Greenshank, 22 Common Redshank and another two Kingfishers.  A Firecrest called in the Bramble entangled Hawthorns and showed briefly and Goldcrest, Chiffchaff and Long-tailed Tit were heard on the walk back along the chalk escarpment. I deviated up to the high view point which did indeed afford a great panorama across the whole reserve. I could see the whole of the Alpha Pool from here and although I was twice the distance away now, I could still identify grebes but alas not the two rarer ones!

A last Buzzard getting harried by a group of Herring Gulls rounded up my five and a half mile walk.  The grey gloom of recent days was returning and the wind was increasing still so I decided that a nice cup of tea and some lunch would be in order.