It was grey and cold and an icy wind and a few spots were blowing in from the west but I still headed into it and towards Fakenham and Kings Lynn to get to the little village of Sedgeford and its all important huge steaming piles of manure...

The male Eastern Blue-headed Wagtail had been around from just before New Year (if memory serves) and I knew that not many people would be looking for it now.  It had been seen the day before and I was hopeful of a quick pull up, yay! seen it! and off up to the coast.


As it was I spent about two and a half hours between the two fragrant dumps with the wind (and smell) in my face and nowt but a couple of poo trotting Pied Wagtails, Meadow Pipits, Chaffinches, Wrens, Robins, Dunnocks and excavating Blackbirds for my toubles.  Even more frustratingly I heard the pesky vagrant but could not see it as it went over!

There were Yellowhammers and Linnets in the stubble fields along with Brown Hares, both Partridges while Red Kites and Buzzards were buffeted above.

After a local chap saw the bird for a nano-second before it vanished I decided that I had better things to do with my day and moved to the coast at Hunstanton where Oystercatchers probed the sward and Turnstones chased chip wrappers but there were no Fulmars to be seen.


On to RSPB Titchwell for lunch and a quick trot down to the sea for a gander. I was helpfully shown both the Woodcocks by a volunteer as they lurked in the willows.  One was showing exceptionally well but the second was simply the top of a barred head and a blackberry eye watching my every move.


The marsh itself was actually fairly quiet with the high waters and strong winds reducing the options but it is looking great. I still picked up all the expected waders with a small group of Avocets, both Godwits, Knot, Grey Plover and a single calling Spotted Redshank. 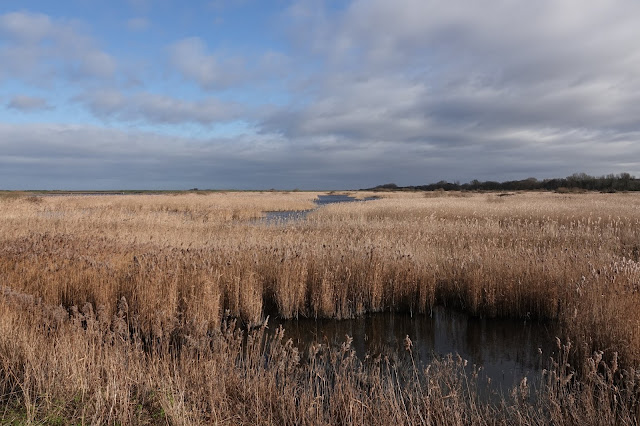 Greylags and Brents came and went and Linnets and both Rock and Water Pipits were out on the brackish lagoon and several Marsh Harriers were enjoying the breeze to pick up speed before spooking everything off the marsh,

The sea was difficult and appeared dead.  A Great Crested Grebe flew by immediately and I asked another chap what he had seen.  ‘Been here 90 minutes.’ he said. ‘Anything doing?' says I. ‘One Great Crested Grebe...’ he says. I took this a sign and turned around and ambled back the way I had come passing a Bullfinch before getting back to the car.

The wind was still getting up but I foolishly decided to go back for another look for the wagtail as it was only 15 minutes away.  Another hour of staring at a big pile of shi decomposing organic matter ensued before I cut our losses and started to wend our way back to Marsham via Morrisons to pick up something for dinner. Living the life...