A tale of tides & the flotsam of modern life


This week has seen some of the highest tides I have ever seen here at the reserve in almost twenty years. Occasionally the concrete Victorian riverwall may over top a little way and even then only in one or two spots but these tides were big enough to cover it in almost its entire length from the Centre to the end of Aveley Bay and even push across the grass and up the flank of the current riverwall probably to a depth of about a foot.

Rodents and shrews swam to shore and every piece of floating timber was festooned with countless flightless homeless inverts with spiders in all shapes and sizes, bugs and their nymphs, rove beetles, springtails, woodlice and ants.  It really must have been like some epic Biblical scale flood event for them.

Carrion Crows, Magpies and Grey Herons were on patrol but unusually I saw them take nothing on this occasion.

The intense squalls that pulsed through on Tuesday created some epic sky scapes as the weather systems headed down river from the City dropping tonnes of rain in the process which has still barely wetted the surface of our poor parched marsh.

Yesterday was a lot cooler with a northerly element to the breeze and amazing cloud trains were watched heading our way against a speedwell blue sky.

This morning I headed along the river edge, tiptoeing through the strandline of branches, beams, sticks, grass and the un-natural detritus of human life.  There was perhaps not as much plastic as there has been in recent years which can only be a good thing but it will need clearing up as it will take another super tide to sweep it all back out again.  Thankfully we have some Team Challenge events coming up to help with such tasks. 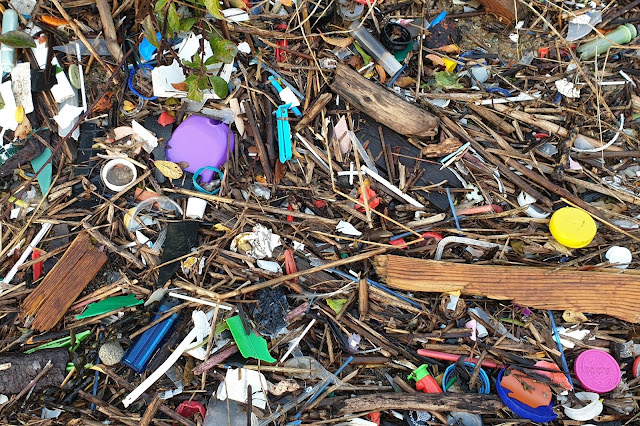 Balls in a myriad of sizes littered the line with foot, tennis and basket being the represented sports while several life rings, a large lemon shaped buoy and a few bits of rope linked to maritime origins.  Similarly, there were many coconuts amongst the debris, quite likely from offerings gifted to the sea by the crews of passing ocean-going tankers and such like.


Shoes poked toes from the rubbish but still seem to be able to find each other in the melange of debris and even though they did not match they still have the urge to be close to another of their species.  Just how single shoes end up in the Thames (or the middle or roads for that matter) has always been a mystery to me.

And in case you were wondering, I did not stage any of these shots; the items are as I found them.

Some of the huge jetty timbers that have adorned our stretch for years have also moved position and an intact leather two seater settee is now positioned on the rocks.  I will endeavour to move it so that it can become a new river watch look out.

As for the fate of the Dominos Pizza man, I can only hope he delivered the Stuffed Crust Ham and Pineapple with extra Pepperoni before his bag ended up in the Thames... 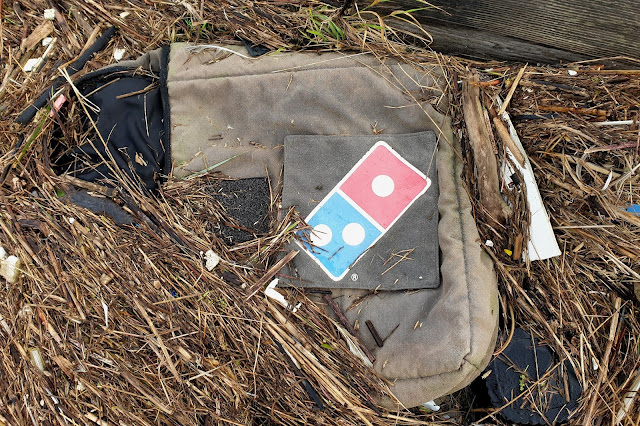 I am sure that there is more to find down here and I hope to get another chance for a poke around in the morning.

All the while I was out, I could hear Skylarks, Meadow Pipits and Reed Buntings going over and Swallows flicked low along the shore. Several Chiffchaffs fed in the hawthorns and Redwings and Song Thrushes called from the big willow before erupting and heading west. There was a real autumnal feel and the chill air reminded me that October was now with us and that the South West beckoned for a week of lurking in the Cornish valleys.
Posted by Howard Vaughan at 11:49