After a relatively easy drive down yesterday it was nice to wake up with a blue sky bathing the view down over Penzance from our ‘houselet’ in the grounds on Kenegie Manor in Gulval.  The weather forecast suggested that this would be the only properly good day this week so we set out for the valleys and the prospect of finding something good.  I have not been down the end of Cornwall for several years and it was good to be back amongst the winding lanes, tall hedges and sudden sea views.

Porthgwarra was my first stop and I spent a pleasant two hours checking the willow, elms and gardens in the valley before looping up to Black Carn and the moor on top. The bushes were quiet with just a couple of Chiffchaffs and Goldcrests but the moor held over a hundred Meadow Pipits that I searched through for the Red-throated and four smart Wheatears bounding around the heather hillocks.

The sea was quiet with a handful of Balearic Shearwaters drifting west close in shore with the Gannets but I could not find a single Fulmar. Buzzards, Kestrels, Ravens and Jackdaws tumbled in the updrafts and a pair of Chough found me on the cliff top and proceeded to aeiriate the sward with vigour while a young male Merlin gave the pipits a work out in a series of switchback manoeuvres. 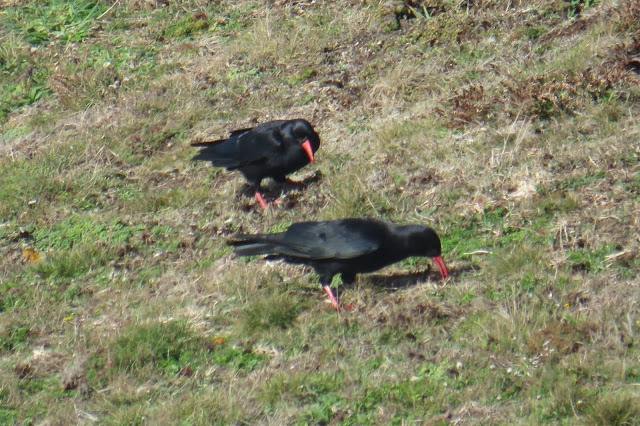 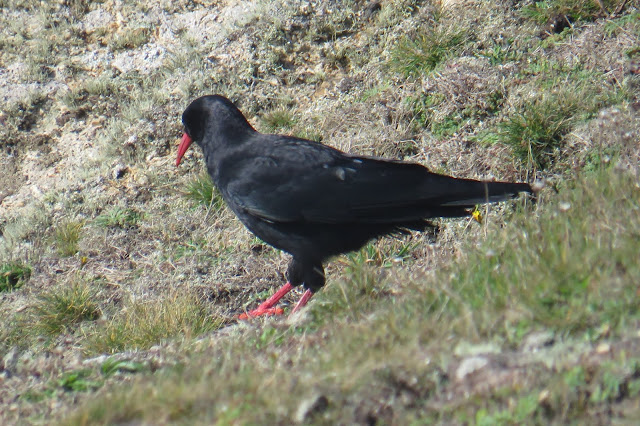 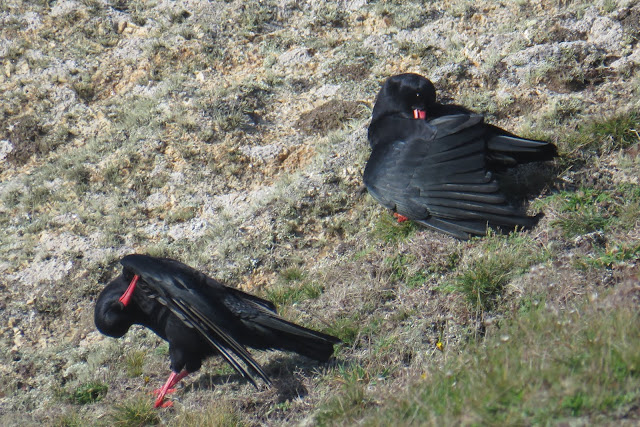 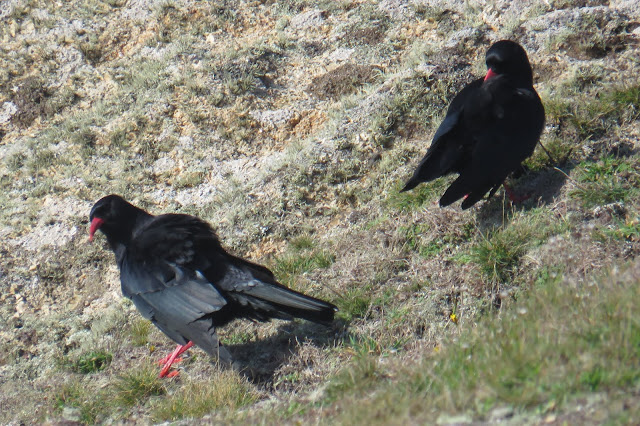 The Longships Lighthouse was visible off Land’s End and further out the one on Wolf Rock was taking a pounding but I suspect it is seldom otherwise.

Down in the little rocky cover a bull Grey Seal bobbed and napped with only his mobile nostrils suggesting that he was even alive and a Shag fished unconcerned around him.


The Ivy and Sea Aster was alive with Eristalis tenax hoverflies with a few Honey Bees, Buff-tailed Bumbles and Red Admirals in attendance. 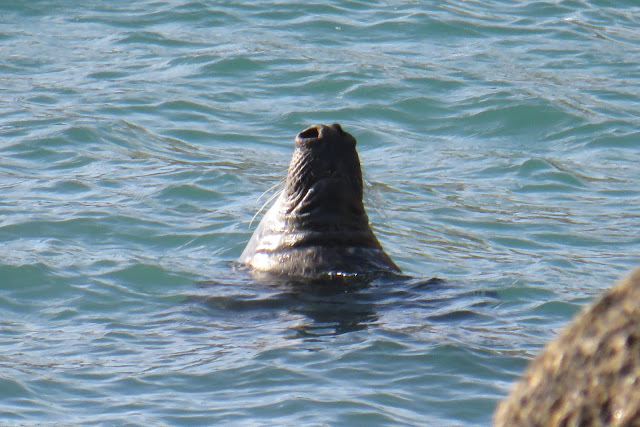 On to my favourite little valley, Nanquidno, that runs down the side of the airfield at St Just. It is the site of my first Cornish twitch (with Charlie Wilkins and Nik Borrow) where on the 17th October 1987, just a day after the terror of the hurricane, I saw my first American Wood-warbler – a Parula, as it fed in front of just ten people in the sycamores that still stand over the babbling stream. 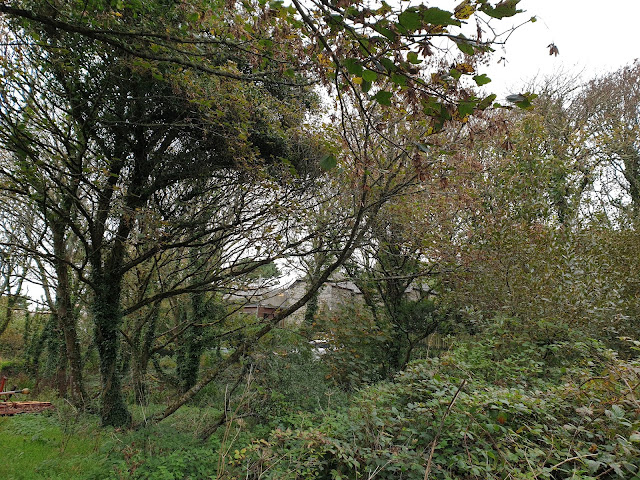 I look up at them every time I visit and reply that video in my head as I stared in awe at this little multi-hued gem that had just crossed the Atlantic.

There were almost no small birds at all to be seen but the 11 Choughs feeding in the paddock with the Jackdaws were ample compensation. It would have been unthinkable 32 years ago.  One pair had found a cowpat of epic proportions and very excitedly set to work on it but this attracted the others and a positive flickathon of digested cow dinner was spread around the field.

A buddleja was attracting Painted Ladies, Red Admirals and Peacocks and I was pleased to find Ivy Bees amongst the Hovers on the plants covering rocks and outbuildings. 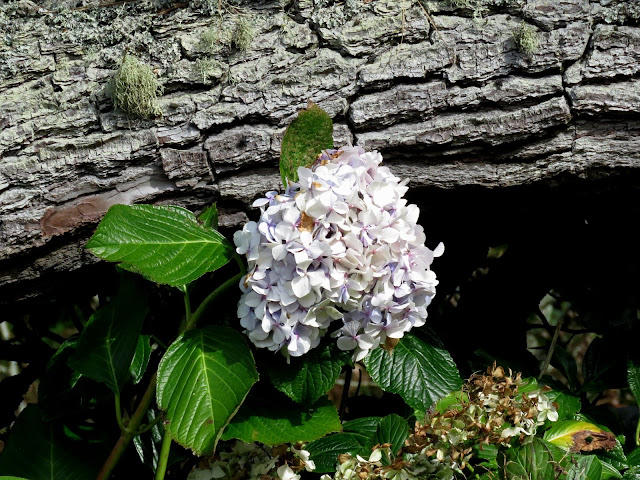 I headed for Cot Valley next and managed to park up at the very bottom leaving Andrea with a view and me with a walk up one side and back down the other.  It felt ‘rare’ but was almost devoid of any small bird movement at all with just the usual tits and crests, a couple of Chiffchaffs and a calling Willow Warbler.  I lost myself once again in the video library for the 17th October 1987 and recalled the other American bird seen that day – a Swainson’s Thrush that obligingly (eventually) hopped around on a pristine cut lawn as we watched from a white gate. That too has also barely changed but today the garden held a Firecrest and nothing else.


Another buddleja held the same species as Nanquidno but with the addition of Small and Large White, Speckled Wood and a very zippy Hummingbird Hawkmoth. 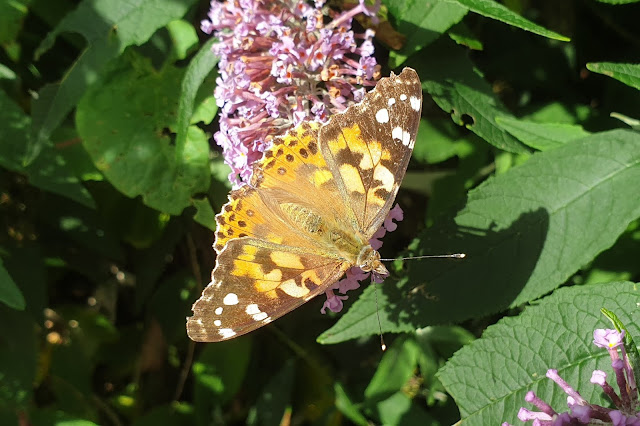 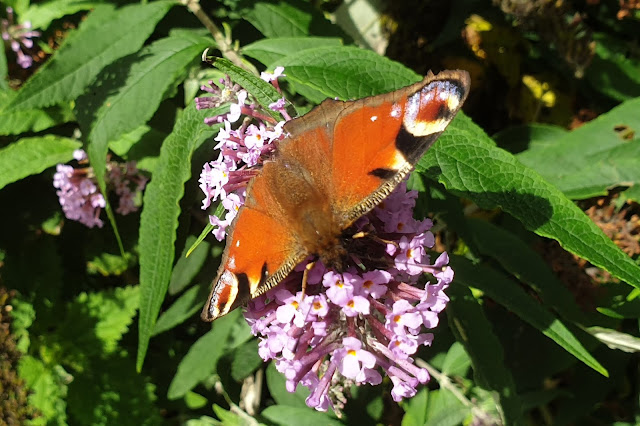 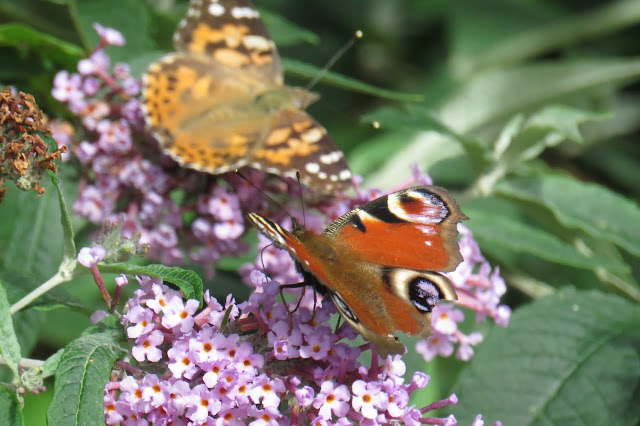 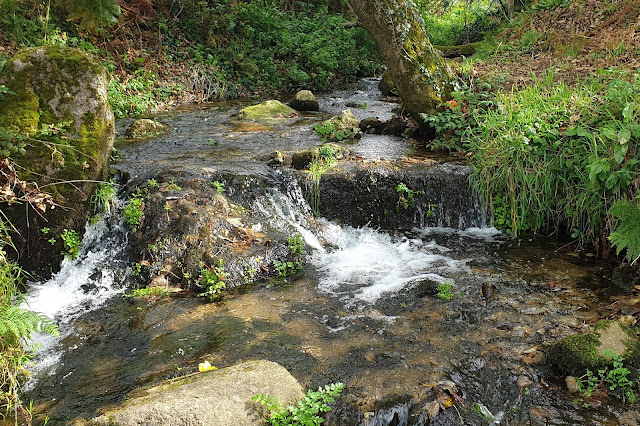 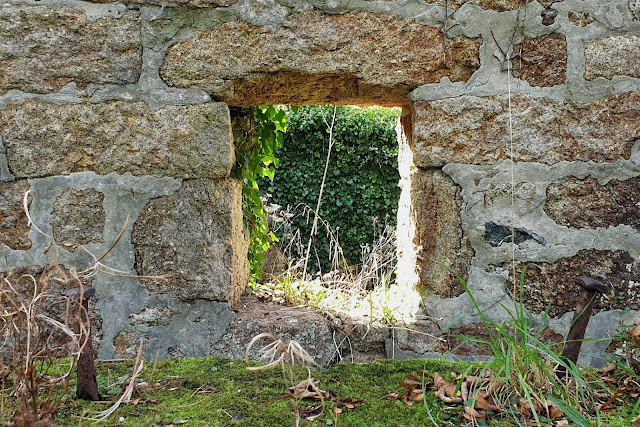 As I headed back down the south side of the valley I discovered several large furry Fox Moth caterpillars which I was tempted to wave around to see if i could attract any passing vagrant American Cuckoos...

Pendeen next for a look at the sea which I can confirm was present before following the loop up through Morvah and Zennor to the Hayle. 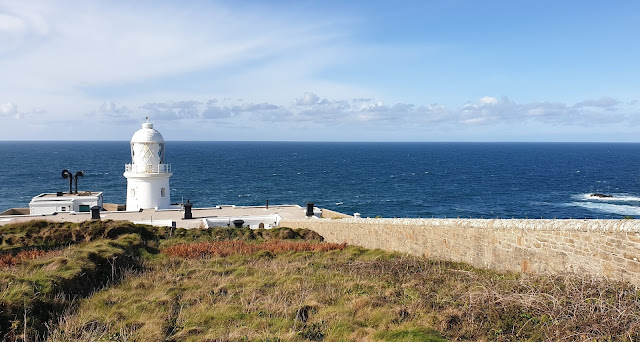 As usual the tide on the Hayle was well out but I did find 19 Med Gulls and a few Bar-tailed Godwits and just two Little Egrets.  I took a picture of one of these and it triggered another memory of seeing them here in October 1989 prior to my first visit to Scilly.  1989 was year two in the inexorable colonisation on the UK by this species and even by that autumn they were becoming expected on estuaries, certainly in the south –west.  In fact the picture is so bad that I had to dig out the trigger picture from all those years ago... 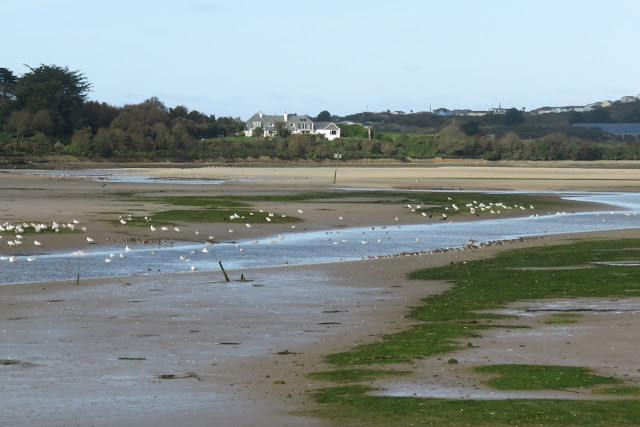 And so my first day drew to a close with more memories relived than new ones made but at least I was having a break from work... oh hang on a minute wasn’t there a Humpback Whale frolicking in front of the Centre?

'Oh and by the way Howard, there has been a Red-eyed Vireo in Porthgwarra since lunchtime...' gggrrrrrr
Posted by Howard Vaughan at 11:33