Prior to Lockdown I was up at a little after five every morning to ensure I had a chance of getting to work on time but until last night I have not set my alarm once since then, allowing myself to wake up either with a cat nudging me or when my body has had enough of laying down. It has been a novel experience!

However, I wanted to try and get out early today as it was due to warm up again for a few days and I had it in my head to see how far I could get out onto the Isle of Grain before turning back.


I left at six in the chill morning air and headed for town where I could cut through to Ship Lane passing two London Planes on my way which were new to the ‘in my head lockdown tree list’.

The Feral Pigeons on the railway arches gleamed in the sunshine and I was delighted to hear two singing Skylarks coming from the east side of the river on the still undeveloped green peninsular. Oystercatchers were calling noisily and a Common Sandpiper was silhouetted on the receding shoreline. 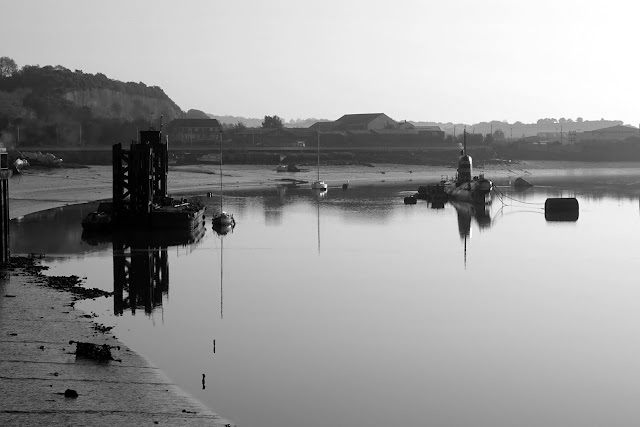 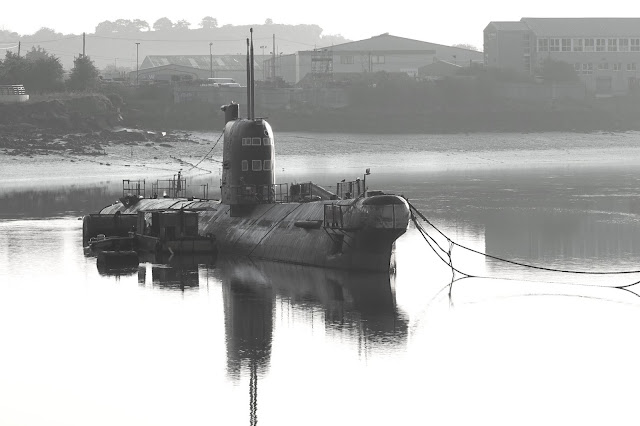 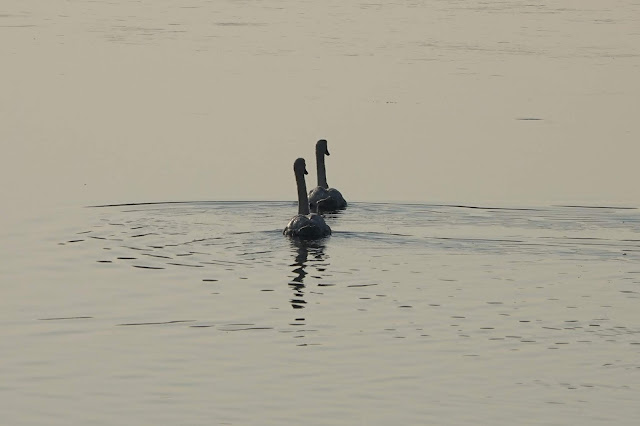 The patch of wasteland that I favoured for Little Ringed Plovers had some puddles on it now but there were just some bathing Herring and Black-headed Gulls and a drowning traffic cone. I headed up the hill to All Saints in Frindsbury where the view is becoming greener with every visit and added Lime to that virtual tree list before following the permitted track onto the patch of scrub above the quarry where the new development will occur. 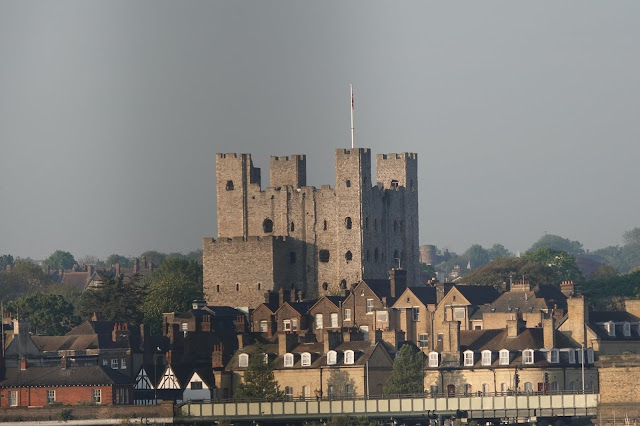 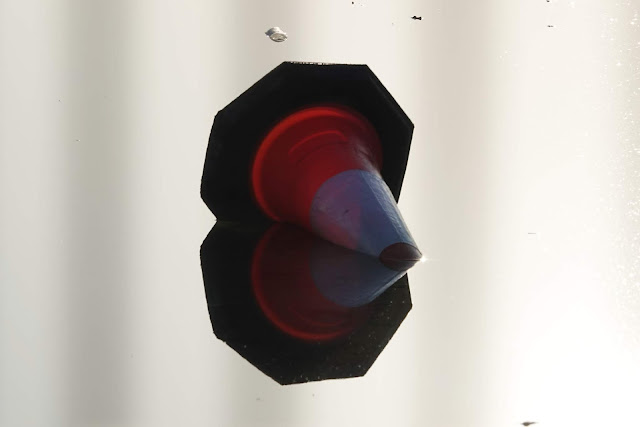 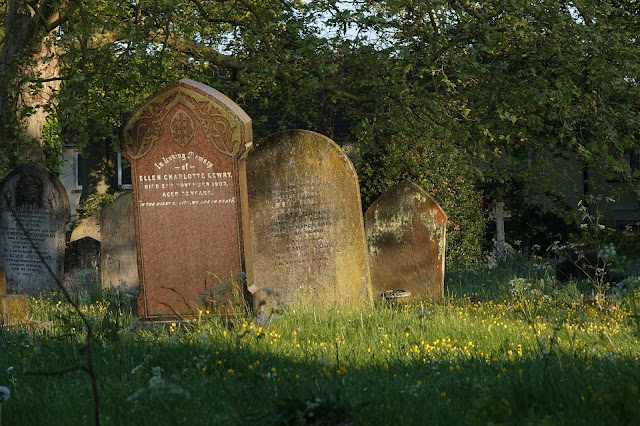 There were still Greenfinches and such like but it was nice to add several Whitethroats and a Lesser Whitethroat to the plot. Down the hill to the sewage works with three Swifts above my head and then on past Gundulph Pool where two pair of Great Crested Grebes were visible but it looks like all the Tufted Ducks and Pochard have moved on. I was very pleased to see four Sand Martins here too as this was a species missing from the walk and garden tally and became number 104. 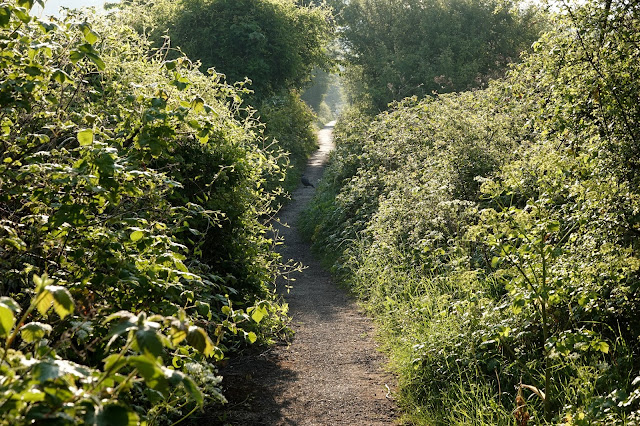 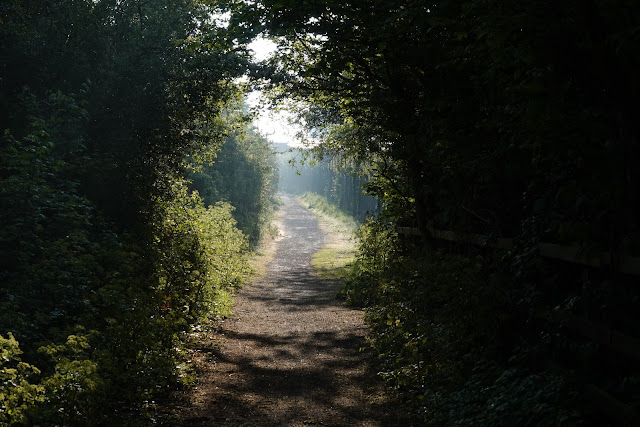 The tide was low again at Upnor which allowed a beach traverse of the Saxon Shore Way once again. I could hear a Common Tern and eventually it came quite close but it looked a little odd and despite the light I was convinced that the bill was all black and that it had smoky grey under parts that left the cheeks looking shining white. The eastern form longipennis felt like a good call but I lost it in the glare. Fortunately I picked it up again as I was opposite Hoo Wood Fort and managed a couple of ridiculously distant shots as it flew in front of the flats of St Mary’s Island.  I could not really see anything on my camera while out there but once home and on the pc, the features I saw are visible even at that range.  Hopefully someone else on a stroll out will bump into it. 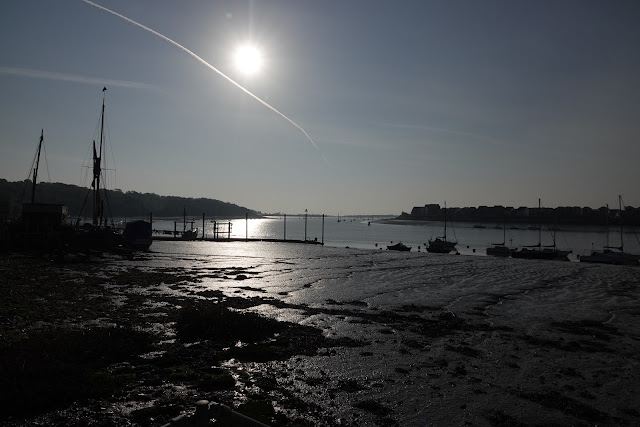 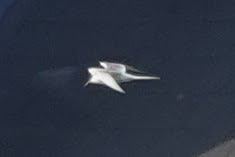 I wended my way through the maze of the boat yards and I counted at least 18 chirping male House Sparrows en route.  I think that they are doing very well in this part of Kent both in urban and rural settings.

Once up on the river wal I was greeted by two pairs of Swallows and a Cuckoo calling from where I had one a couple of weeks ago while another one was out in some scrub on the island with Fort  Hoo on the end.


Whitethroats and Reed Warblers sang along the whole route and the Skylarks were particularly vociferous. I have still only had one Sedge Warbler along here which I find odd. I had visions of a Woodchat perched atop a Hawthorn but was content with some red breasted Linnets and two shouty Cetti’s Warblers.


There were three Wheatears in the paddocks once again but these were all male Greenlands but they stayed out on the middle. 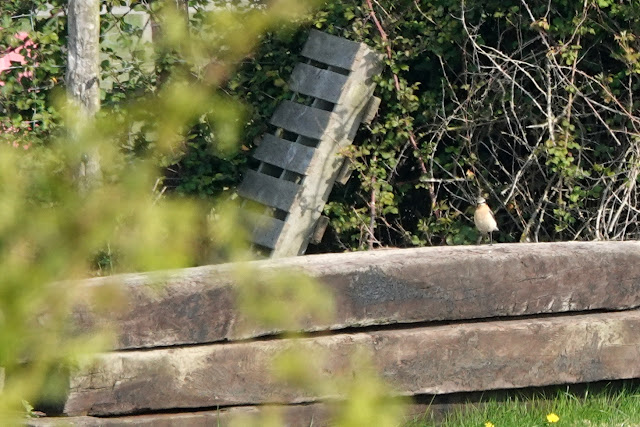 I chose to carry on a little further to check out the piece of marsh towards Kings North Power Station for the chance that the wet meadows would hold a Lapwing or two but I alas I am still Lapwingless.  I did add another Cuckoo, a good few warblers and my first two Teal while Rooks and Jackdaws fed with the cattle and a semi-naked man practiced some sort of umm heavy breathing Yoga behind the hedge... 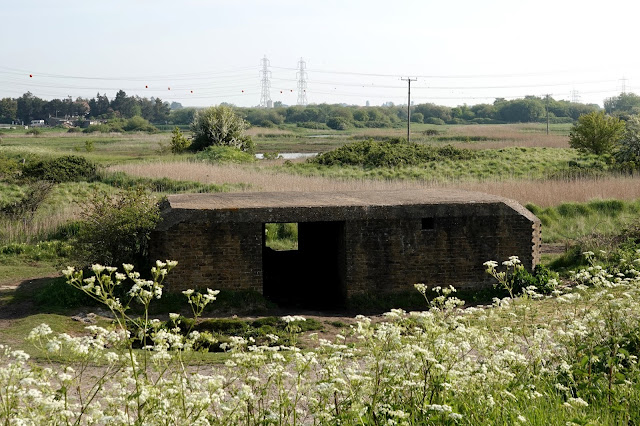 Coming off the seawall took me inland towards the gravel working at the back of Abbots Pool and almost immediately I found a flighty Wall Brown on the path. This once common butterfly is now so scarce that it is always a joy to see even one. 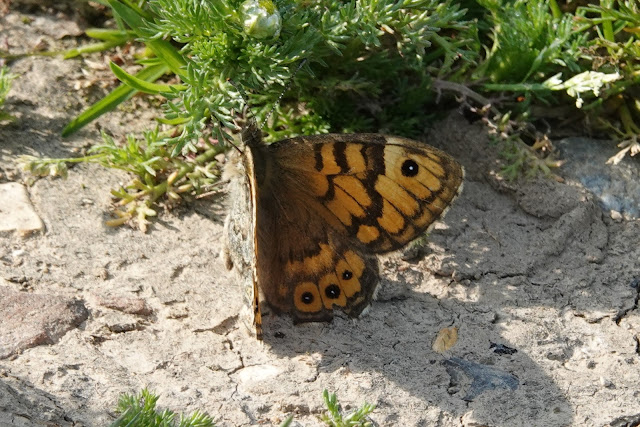 Med Gulls drifted over and seemed to be dropping onto the gravel working with some Black-heads which gave me hope and although I could not look inside the complex a pair of Little Ringed Plovers did the decent thing and engaged in several energetic display flight circuits around the invisible pits. My third new bird for the walk.

Jacobs Lane took me back up towards the Stoke Road with singing Whitethroats and Skylarks all around. However, I was very disturbed to find a young man in full protective clothing (but no goggles or facemask) spraying the entire bank on either side of the road.


I could smell the pesticide on the air and actually stopped him to ask what he was trying to eradicate suspecting quite correctly that it was the Alexanders. ‘Targeting this one but not the grass’ was the response.  Either side of the lane was sterile Rape. His company truck suggested in their name that they engage in countryside management. I shook my head in despair and carried on up wind of his rather random spraying.

This is the main truck route lorries take in and out of the aggregate works and the power station so I stayed well on the verge as I headed up Ropers Lane.  A ditch ran alongside me and was surprisingly rich in flora with great big clumps of Marsh Marigold and Yellow Flag, Great Willowherb, Celery-leaved Buttercup, Horsetails and Salad Burnet. There was even a Hairy Hawker patrolling!


There were more Skylarks spiralling up and it was good to find another singing Yellow Wagtail and two more male Corn Buntings jangling merrily. A Peregrine watched from a pylon top and Buzzards thermalled while four House Martins were collecting mud from a trackside puddle.


From here I followed the main road south before turning off towards Deangate Ridge and into what used to be the golf course and is now Hoo Country Park.  It is a big site and I traversed the northern side picking up the usual woodland edge suspects before finding a couple of Nightingales at the far end.  I was aware that the hotly contested Lodge Hill SSSI was just a short way through the trees where hopefully someone has got in to count the Nightingales this season to keep up the pressure not to develop the land into yet another little box, no garden and no nightingale housing complex. 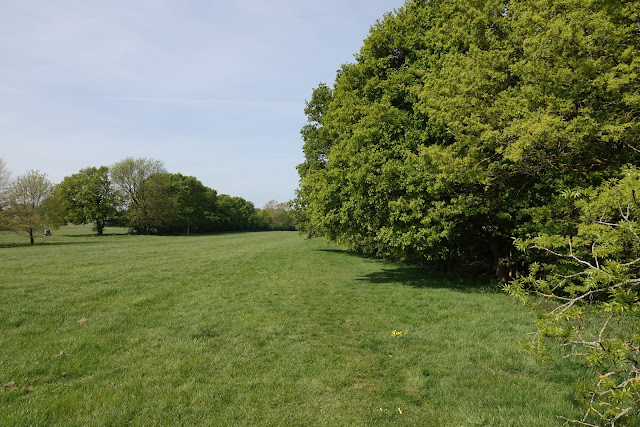 I was told that I could not get out the other end but unsurprisingly I found a path out to a field margin that took me down to the new housing development at Chattenden where there were more ‘throats and an out of place singing Cetti’s Warbler while Med Gulls caught flies above the fields. 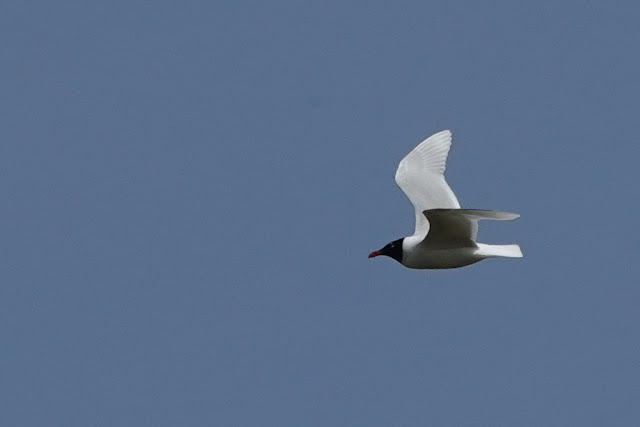 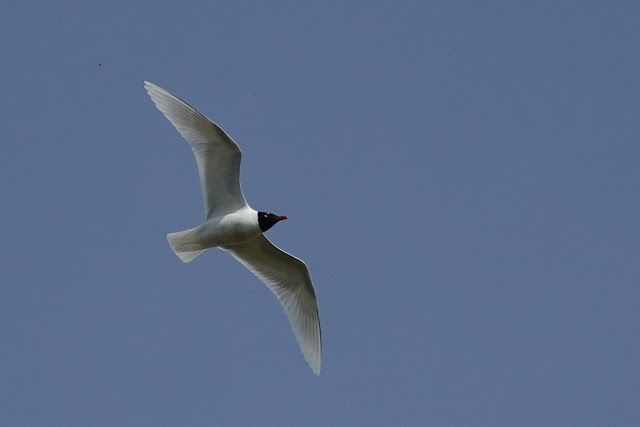 From here I cut back in again and followed Lochat Road again through the woods with their Nightingales, Orange Tips and Beeflies before taking a different southerly path than I had before that took in the rolling sheepfields, a glorious buttercup meadow and even the only pine plantation I have encountered on my walks. 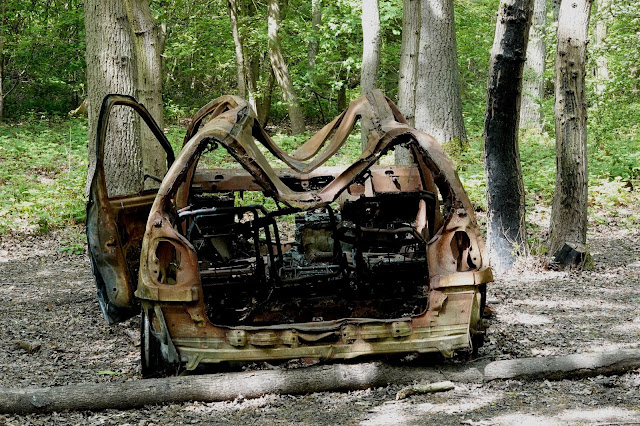 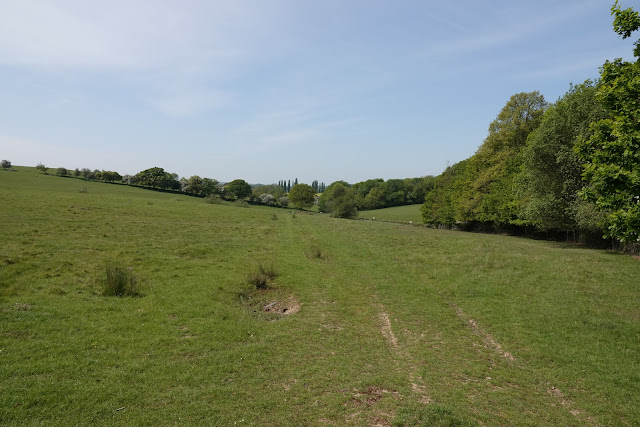 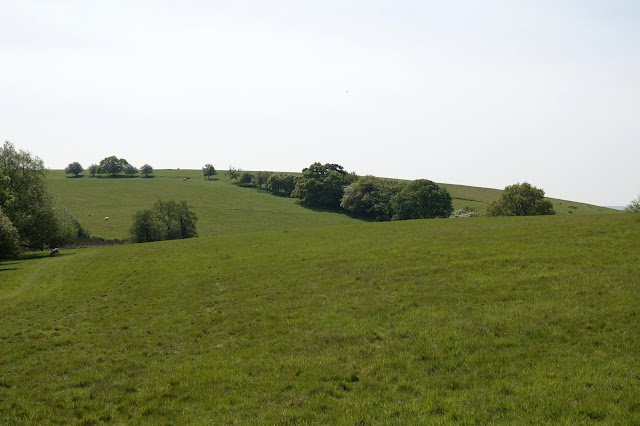 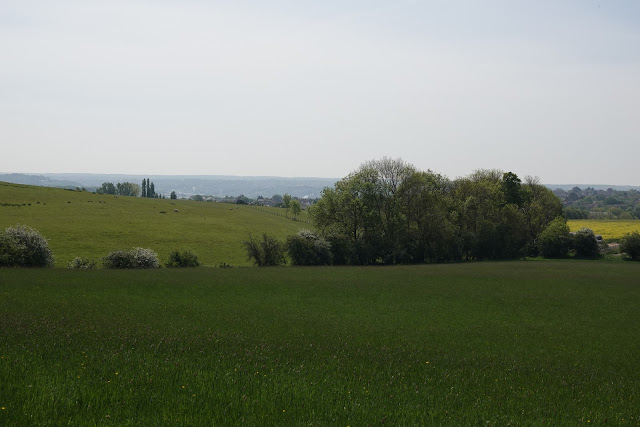 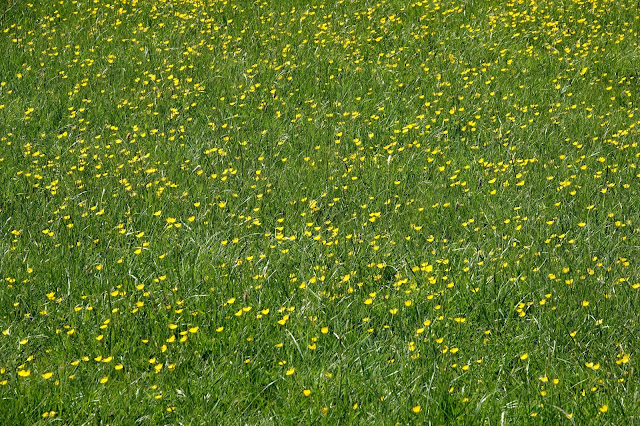 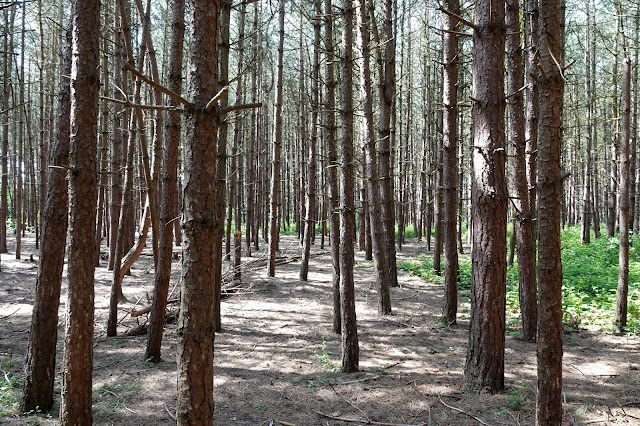 I plotted a few more warblers and woodpeckers as I ambled back past the lettuce, wheat, oilseed and rhubarb fields of Dillywood Lane and eventually to home after a slightly longer loop than I had anticipated but one with much reward for my efforts.


A chill out up the garden later on showed that the Swifts are definitely back now and a male Kestrel, Hobby and a bucket of G’n’T rounded things up very nicely. 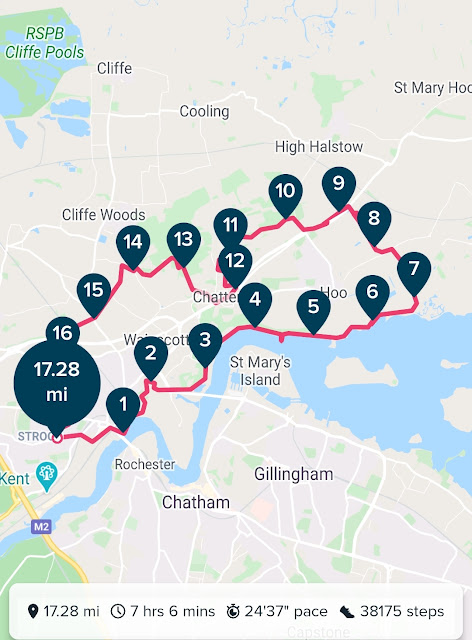