I was feeling up for another walk this morning and so headed out after a lazy start with the intent of getting up to Ranscombe Farm again to see how the flora had developed since my visit on the 15th April.

I took it easy and stopped to take some pics along the Cuxton Road of the Mouse-eared Hawkweed now flowering on the verge although I am sure the council will feel the urge to mow it soon before it looks too untidy.

Yellow was the colour of this section with Dandelions, Hawksbeard and Sow Thistles in bloom while a vibrant purple Solanum added a splash and the Foxglove Tree on the green is waking up at last with the lilac trumpets appearing alongside tiny budding leaves and last year’s seed pods.


Once on the chalk before the M2 I found the first flowering Ox-eye Daisies and Black Knapweed of the season and a Small White was nectaring on some Red Valerian.


The Lesser Whitethroat was still rattling just beyond the bridge and I was pleased to find a lovely scattering of Columbines down the bank amongst drifts of tiny flowered Field Forget-me-nots and Speedwells.


I retraced my route from before to start with and the margins of the first chalk field were once again superb in the warming mid-morning sun. Two Song Thrushes and several Blackcaps were in song and Starlings moved back and forth with food. 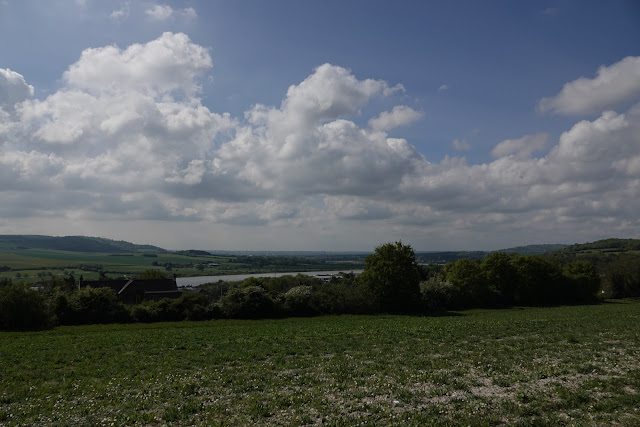 Many of the earlier flowers were now over and the Yellow Archangel and Dogs Mercury were already forming seed pods but the Wood Spurge was still going strong.  The Common Gromwell was coming into flower and Hedge Bedstraw was pushing through the herbage.


Common Rock-Rose and Vipers Bugloss were newly blooming and sulphur Brimstones were floating along the edge. There were still many Dark-edged Beeflies hovering over the path and despite what I said on Friday there were still lots of Epistrophe eligans on the wing here.

Doves Foot Cranesbill, Germander and Field Speedwells were in the margins and Perforate St John’s Wort was now showing through.


A few tentative Elders were in bloom and some of the Hawthorns were now largely over but I did find a very fine pink flowered specimen.


A sunny spot by the railway held a little group of Myathropa florea and they even landed on me as I lingered to watch them. From here it was up past the Buttercup meadow which now had Common Mouse-ear growing along the fence-line.

There were more Blackcaps and Whitethroats singing as I entered the Valley and Skylarks were serenading unseen. 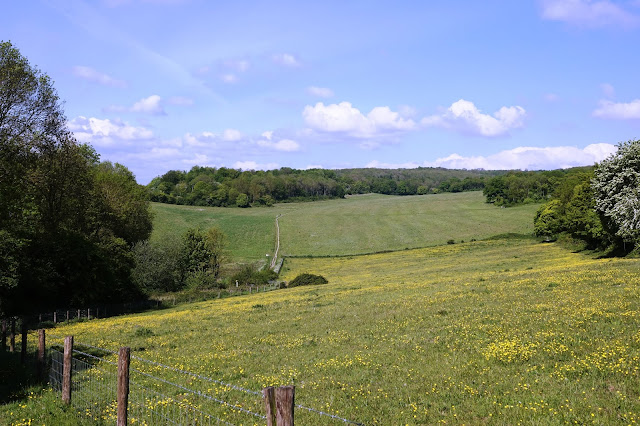 The main Valley fields had greened up since mid-April and Dandelion clocks now outnumbered flowers and the rosettes of Field Poppies abounded.  By scanning either side of the path as I walked up I was able to find Field Pansies, Wild Radish, the minuscule Field Madder and one clump of vibrant Crimson Clover. 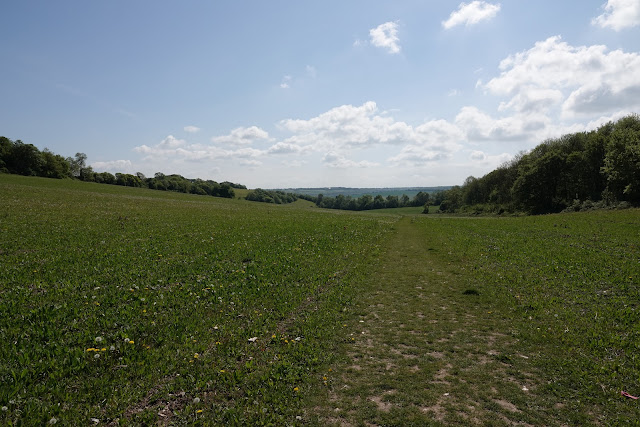 There were countless micro bees that were too small and too quick to get anything on and lots of Flesh Flies and a few Greenbottles searching out the leavings from inconsiderate dog owners. Peacocks power glided and all three Whites flounced and a Merodon equestris alighted on the path.


I did not divert off to the south this time and stayed in the Valley to the start of the woodland where Bluebells still glowed in the dappled light. A few hoverflies were encountered on the outer fringes and an Empid (possibly Empis tessellata) was on the prowl and I later saw one with a smaller fly.  Gooden's Nomad Bees were very common although they kept eluding the camera.


I cut across one last field beyond this finger of wood and then started the loop back on the upper path towards the farm.  I sat on the Kitchen Field bench to give my shins a break and was joined by a pair of Marpissa muscosa who were patrolling their chosen fencepost.  This is our largest Jumping Spider and is always good value if you get to spend some time with them.

Down at my feet a Silpha tristis snail-killing beetle ambled purposefully by and this drew my eye to a small patch of Common Milkwort and Sanicle.  Several Andrena bees were floating around and have been confirmed as A. scotica. 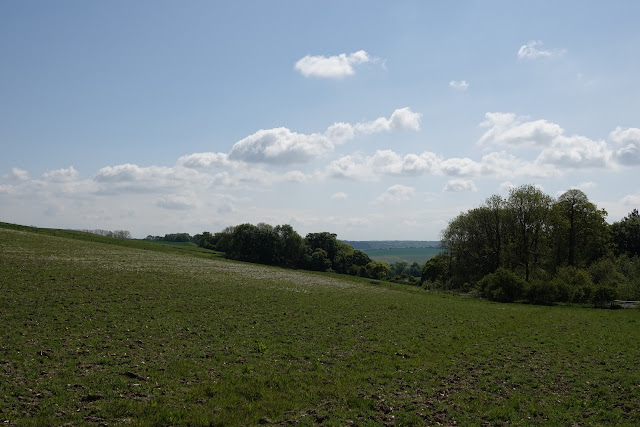 Up through an Oak and Hornbeam grove the remnants of an engine block and front chassis sat incongruously in the grass.  It was not so much the ‘why was it there’ question but the ‘why only the front end?’ that perplexed me.  I am sure someone out there will know what it was before it died a horrible death! 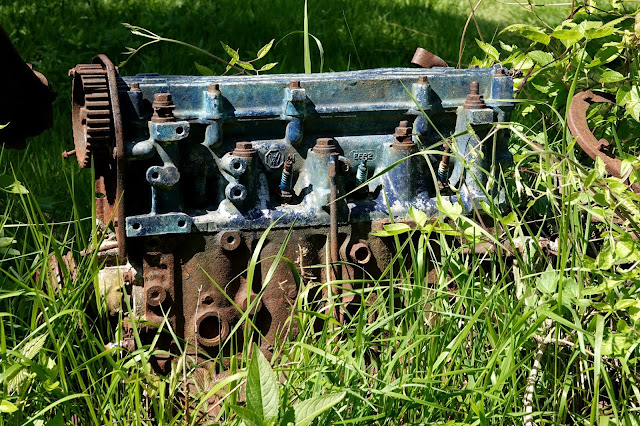 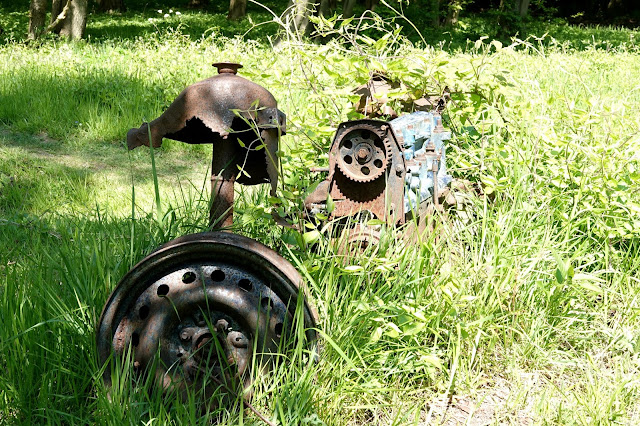 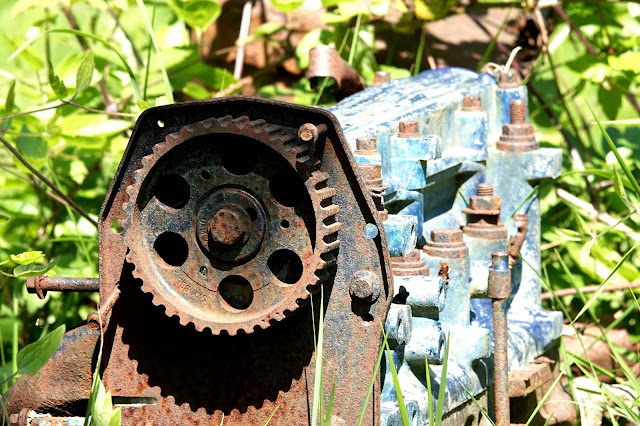 The Sweet Chestnut coppice pushed in from the north side of the path with silver trunks gleaming and there was a scattering of Bluebells and Bugle underneath and the first fronds of Bracken were making their presence felt with leaves rolled up like clenched fists ready to unfurl and aggressively  take over the lower storeys. 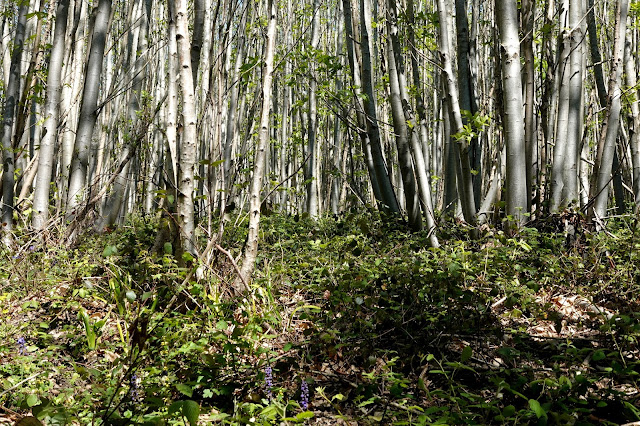 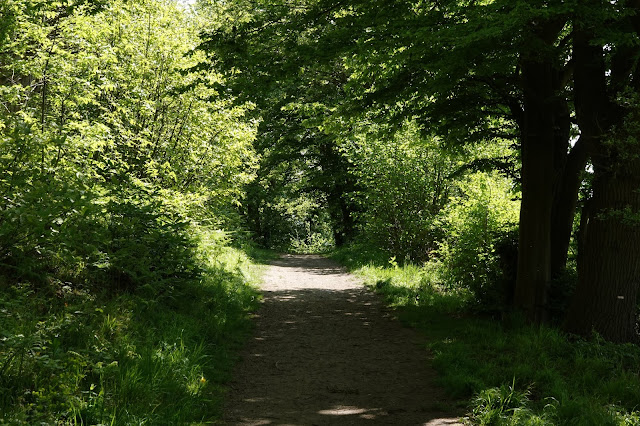 The view out the other way was huge and green looking south east somewhere to the east of Maidstone.

I wandered on passing an active Badger sett and a patch of Butchers Broom that still had fresh red berries as well as the tiny little flowers under the pretend leaves.

Before long the path came back to the wheat fields above the farm and then along the edge of a year old coppiced swathe where more Bluebells flourished and a Garden Warbler serenaded me from some Birches in a heartfelt outpouring of bubbling magic. It is one of my favourite songs of any British bird and it makes me smile even now just thinking of that encounter. 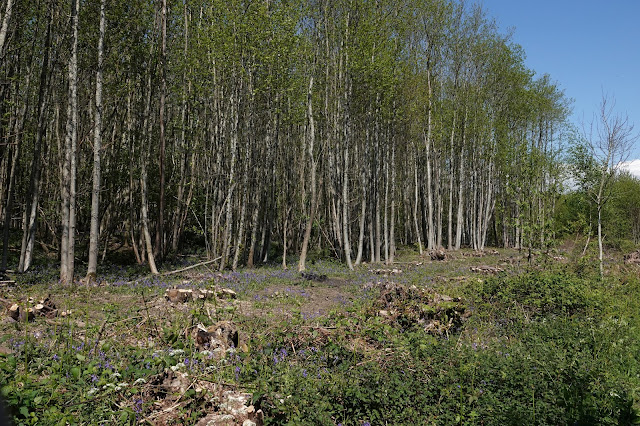 From here the path headed back into the woods past a big clearing with stacked chestnut logs but still no Tree Pipits but I did find a couple of spikes of Early Purple Orchid and a wild Honey Bee nest high in an Oak. 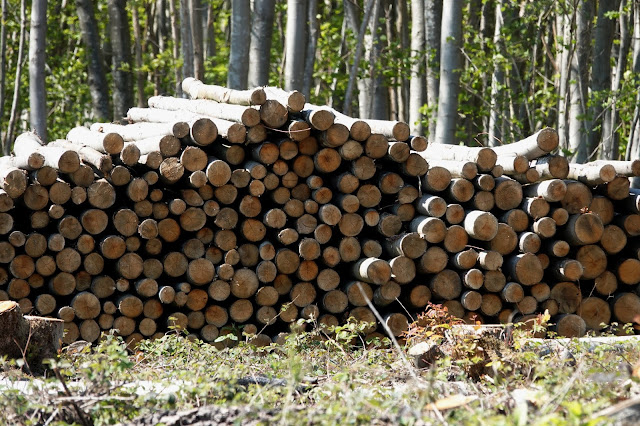 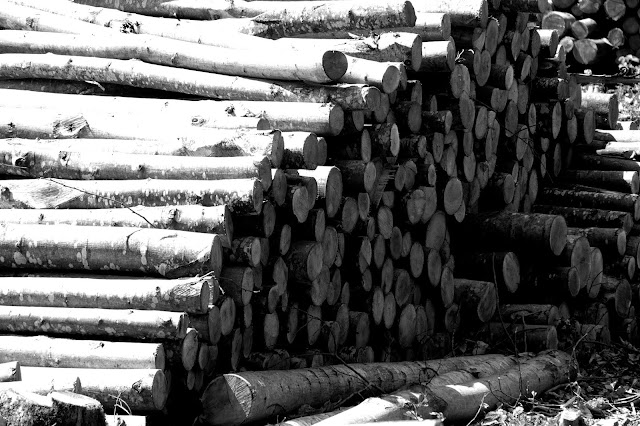 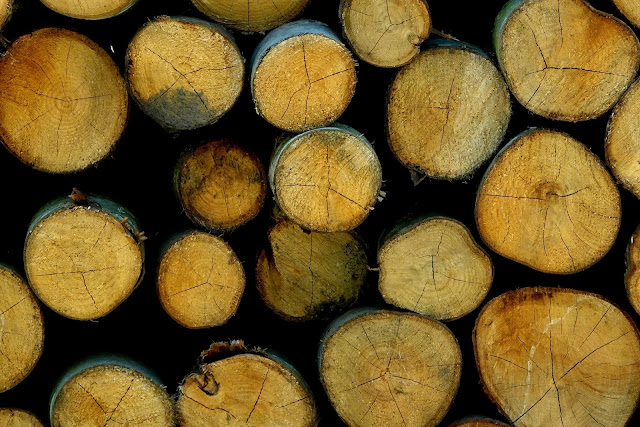 All too soon I was at the footbridge over the Eurostar that would lead me onto Bligh Road and the downward perambulation to home and some lunch. 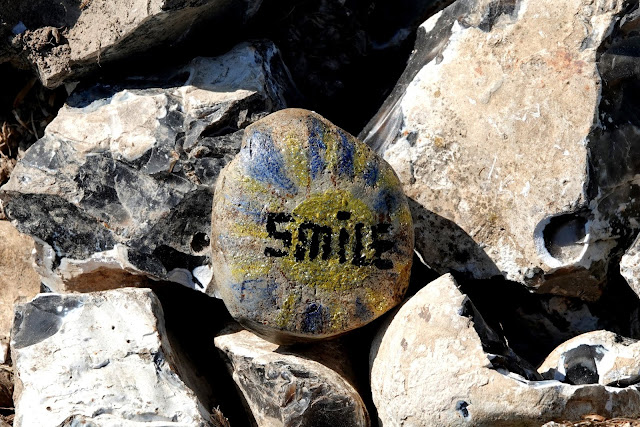 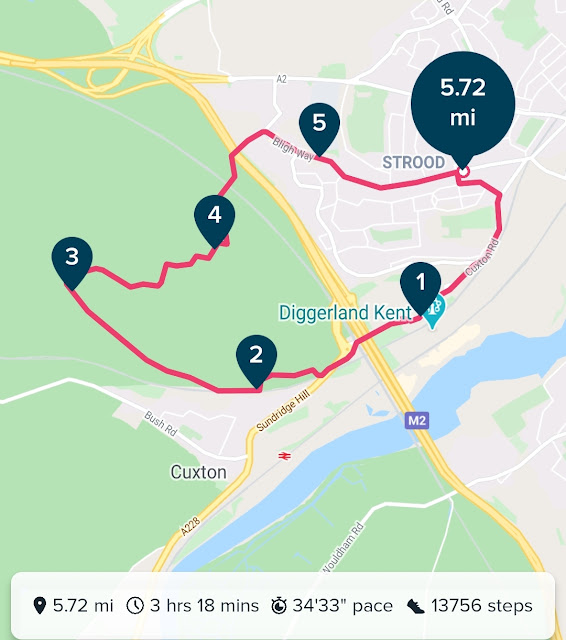