Needing to go to the Post Office again dictated the direction of travel this morning as I set out on a chilly blue sky morning.  I could hear the ‘shu shu’ of baby Starlings but as yet they are not out and about but with at least 35 pairs counted using my road at the moment the greens will soon have a covering of begging brown babies.  I stopped to take some pics of the last remaining Dandelion clocks, Daisies and Buttercups as I could hear the dreaded council grass butchers on their way up the hill.


I made my way through the tunnel and into the Ranscombe – Cobham Woods.  There was not one person around and I was surrounded by singing Blackcaps, drumming Great Spotted Woodpeckers and dappled light falling through the still young leaves of Chestnut and Oak. 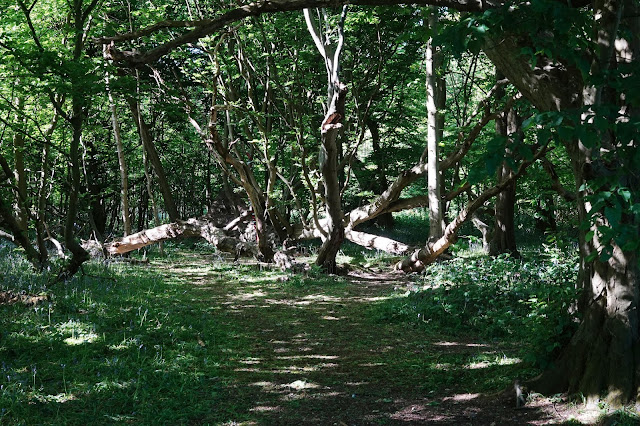 I had sub-consciously removed the drone of the once again busy A2 and it was just me and the trees. I said hello to some of my favourites as I headed up amongst them before my first bubbling Garden Warbler of the day stopped me for a while. It seemed like he made sure not to start up if a Blackcap was already going for it.

A Blackcap may well be able to throw bits of Song Thrush, Nightingale and Lesser Whitethroat into its song but it never sounds like the almost uncontrollable outpouring of a Garden Warbler. I think only Eastern Orphean Warbler gives it a run for its money as Sylvia top vocalist.


I turned north at the start of the Cobham Estate Highland Cattle enclosure as I wanted to enter it along the golf course edge to check for new songsters as I had not been that way for some time.  Another Garden Warbler sang and the Fallow Deer had left some evidence of their presence on the path.

A sunny Bramble and Nettle patch held a couple of Speckled Woods and a few flies that posed in their desire to warm up a little.


I was greeted by another drumming Great Spot as I entered the enclosure and a Song Thrush was belting out from the extensive Ash Grove just beyond the fenceline. Bar an odd Oak it just seemed to be this species and I did not notice it last time I walked here.


Blackcaps and my third new Garden Warbler were found and a Treecreeper sang just before I emerged back onto Cobham Golf Course which was looking beautifully tended but there was still absolutely no chance of my getting hit by a flying ball.

Once at Cobham I retraced my steps from last week down past the cricket pitch and into Jeskyns CP with the intent of covering what I failed to get to before.  The Fox family were firmly out of sight today.

It was somewhat busy with dog walkers and buggies but I avoided the crowd feeding the sheep (or is that sheep feeding the sheep?) and made my way towards the western edge where I was pleased to discover a fine male Yellowhammer foraging for insects in the young apple trees there. Another gap filled on the Lockdown List and worrying that this is the only one I have encountered. 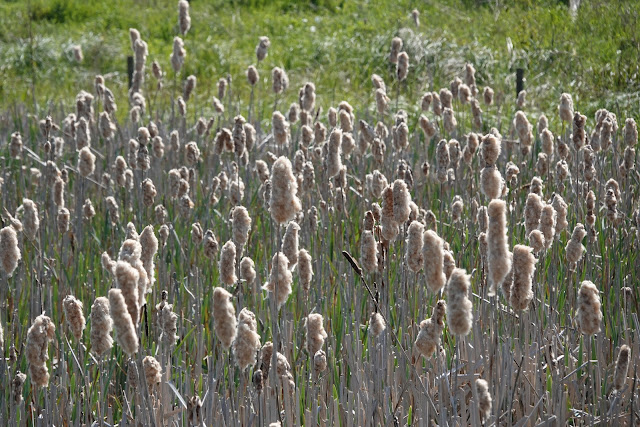 A few hundred yards away it became Bunting Double Bubble with a singing male Corn Bunting around the edge of the cow pasture which was unexpected. 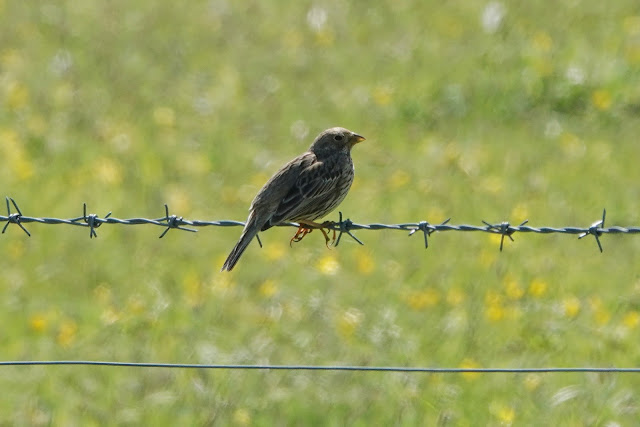 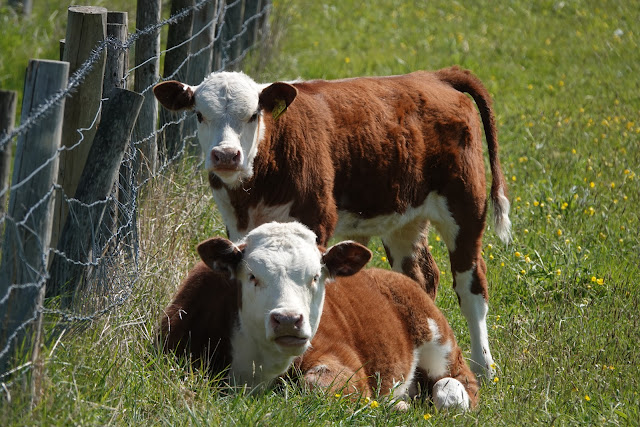 From here I walked back into Cobham and had a look at the churchyard of St Mary Magdalene before visiting the rather quaint Village Stores for a spot of lunch. 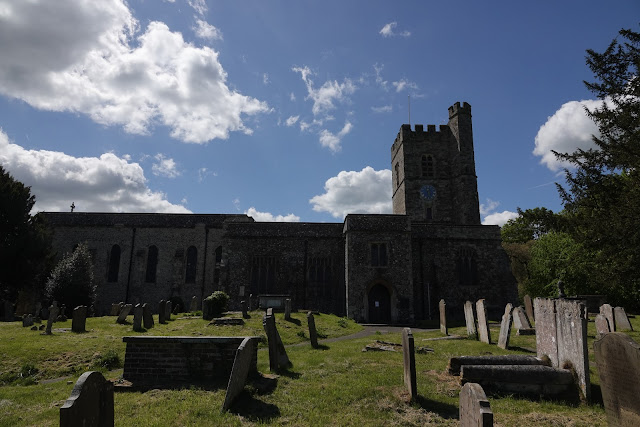 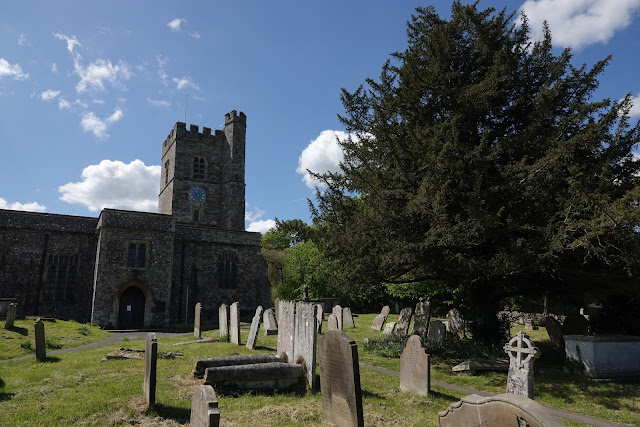 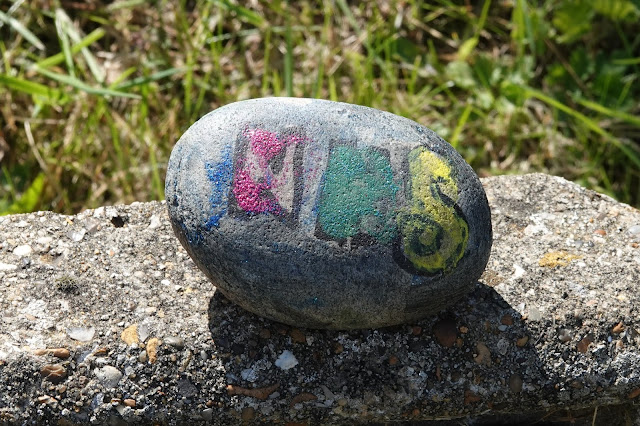 I ambled along munching on a fine bacon cheese and tomato turnover and then went down Cobhambury Road logging a few more Whitethroats and Skylarks and said hello to some horses in a paddock. 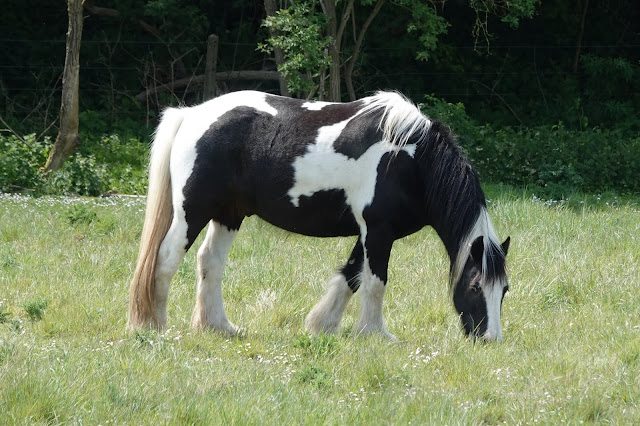 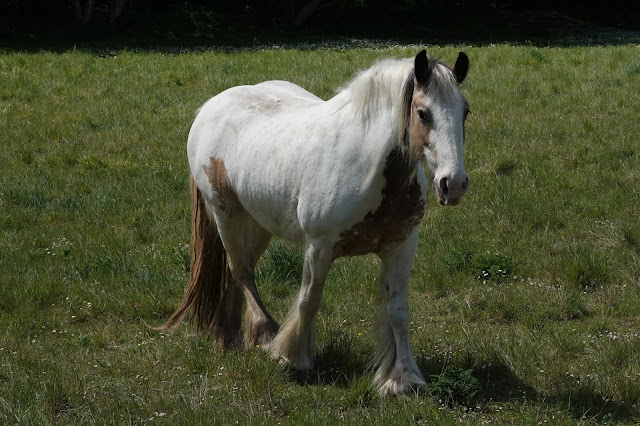 The Dandelions were covered in a host of what I think are a species of Calameuta sp Sawfly but I am not sure which one yet! 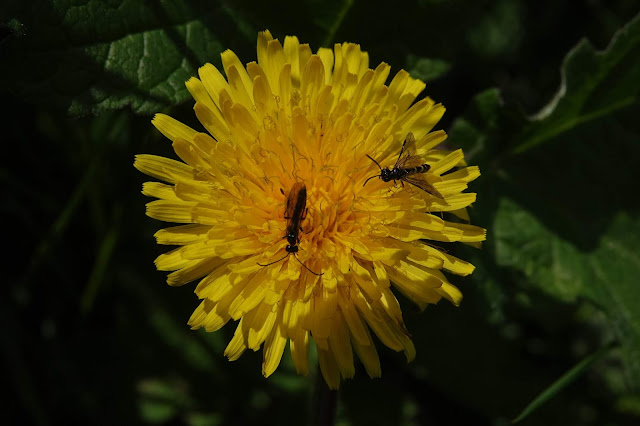 I was aiming for the path back up onto Ranscombe and found an alternative route that kept me off the road and into the top of the fabulous south facing meadow. I sat a while at the top and looked across to the clearfell Chestnuts I came through a couple of weeks back.  The lorries and cranes were in there removing the timber and the piece of wood I had to fight my way through to pick up the path had completely gone. Not quite sure how doing this during the breeding season is any different to the railways clearing embankments, verges being mown and hedges flailed? 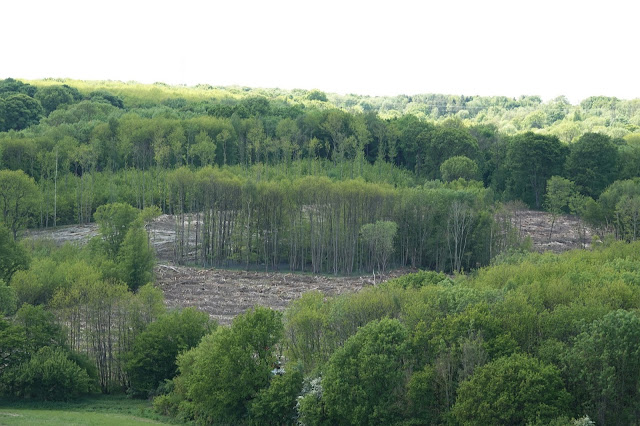 I was surrounded by Salad Burnet, Mouse-eared Hawkweed, Speedwells and the scent of crushed Thyme from where I was sitting. I could happily have nodded off for a while.

This top path alongside the railway held several Dingy Skippers, Small Heaths and my first Common Blues of the year as well as some rather bright Brimstones.


I went through the tunnel and into the meadow where I had the Dingys the previous time.  It had grown up quite a bit and was full of insect life.  Grizzled and Dingy Skippers flicked ahead of me along with more Small Heaths and Common Blues.  A fine Brown Argus was getting stroppy with a Blue and a couple of Cinnabars fluttered around while Med Gulls and Buzzards called above.

I rejoined the main Ranscombe path heading east and walked into more of the same butterfly species but I just can’t find a Green Hairstreak anywhere.  A fine male Orange Tip did however land for just long enough for a shot.

A Xanthogramma hoverfly caught my attention; it was my first this year but the first thorax stripes looked very narrow and straight and I was able to confirm later that it was X. citrofasciatum, a new species for me. About a mile further on I found a Xanthogramma pedissequum agg feeding on White Bryony flowers for handy comparison. 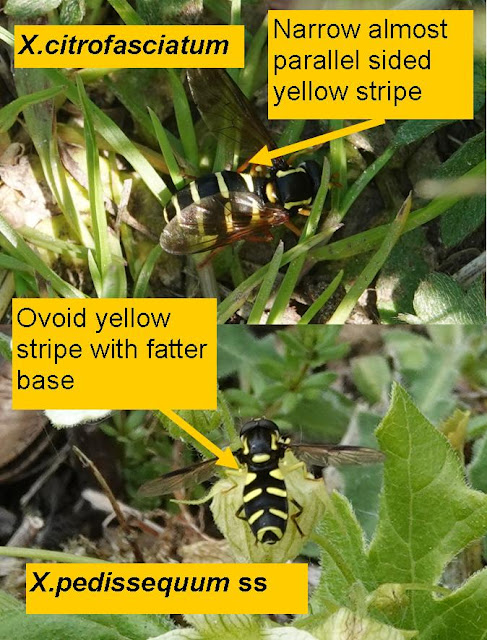 Looking back down on Bush Road I could see a field being ploughed with 35 Med Gulls and a few Black-heads following along behind before I was able to cut down to The Valley. 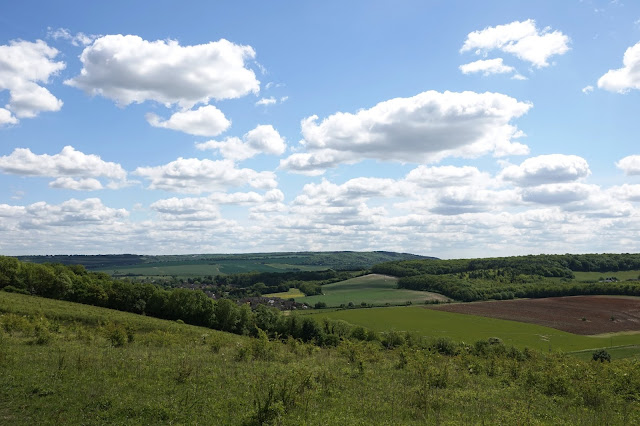 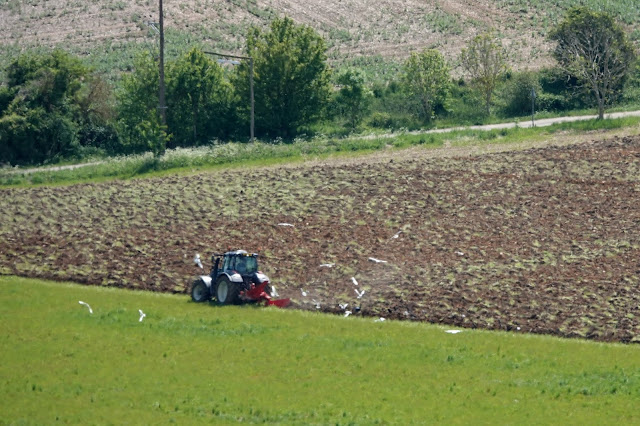 Botanically not much new to see but the Field Pansies were still twinkling away and some seem to now have lilac on them. At the crossroads I turned left and up onto the middle path that I had previously walked.  It took me above the north side of The Valley where Rock Roses bloomed before passing the beef cattle on top and turning towards the actual Ranscombe Farm passing some fine stray Broad Bean plants flowering in the margins along with the first sweaty pig smelling Hogweed blooms of the season complete with a very smart little fly that I have identified as Platystoma seminationis. 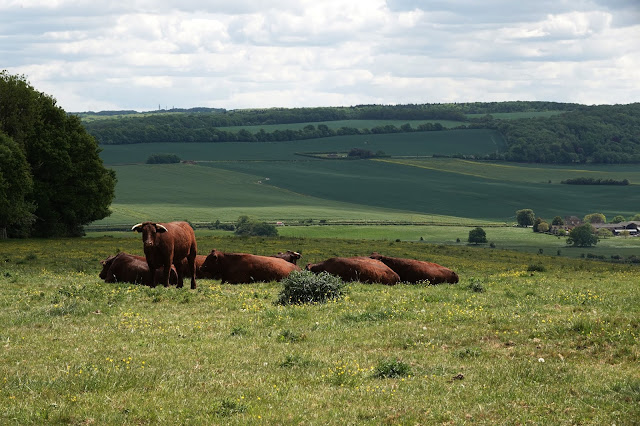 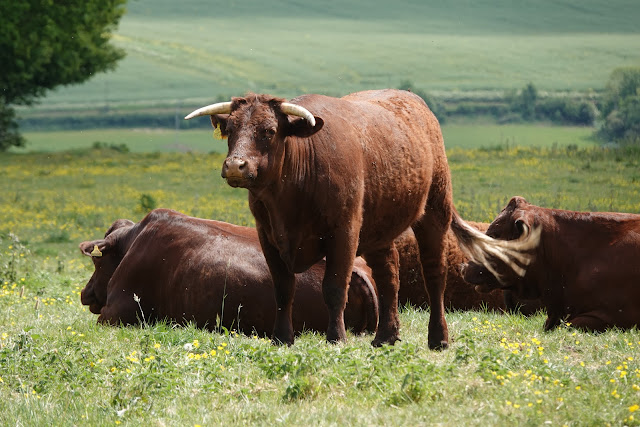 Wood Avens were blooming in the same strip as well as Wild Mignonette and Nipplewort.


It was downhill to the car park from here and then back across the M2 on the Cuxton Road on the last bit of my 12 mile circuit pleased with some new wildlife encounters and my much sought after Yellowhammer! 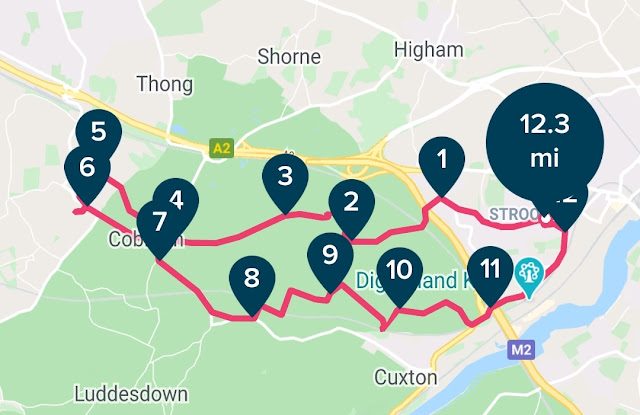