With the way that my accidental butterfly season was going I decided to head east towards Canterbury this morning.  I should really have gone yesterday but the threat of thunderstorms before lunchtime put me off and then as it turned out it was a scorcher but I did get a lot done in the garden!

The weather today was windy and it was overcast but it was meant to improve and by about 11am I was at Denge Woods to the south of the City.  I had not been there for more than a few minutes when Nicole and Jason turned up which was great as I have not seen them for two years since I last came down here to look for Ladies and Dukes. 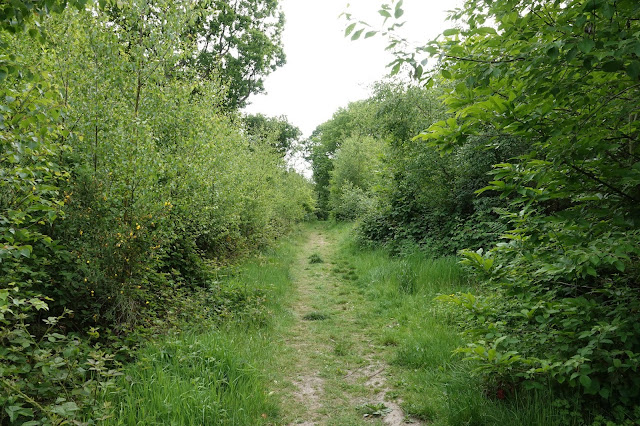 A very pleasant few hours ensued with all the usual appropriate distances adhered to which was a little odd when taking turns to move in and look at something but was easily manageable!


The downhill track towards the meadow where the Duke of Burgundy Metalmarks are found was the usual treacherous tiptoe through the dog mess but there were still things to see including Heath and Wood Speedwells, Meadow Cranesbill and clumps of Spring Cinquefoil.

Wood Ant nests were starting to build up and I was glad of closed in shoes and despite the very windy conditions there were lots of insects resting on the Bramble, Nettle, Willowherb and Black Bryony leaves.

Empis tessellata were very evident along with countless Flesh Flies and Scorpion Flies along with a few hovers including Eristalis tenax, Eupeodes corollae, Episyrphus balteatus and my first Xylota segnis for some time.  We used to get them at Rainham but I have not seen them for a few years now.

A Glow-worm larva crossed the path but there were no Tiger Beetles to be seen.


Chiffchaffs, Blackcaps and Garden Warblers sang and a nest of Lesser Spotted Woodpeckers could be heard but frustratingly not seen or even approached from another angle.  We could hear the birds begging and even when the adults came in to feed but without any chance of catching a glimpse! 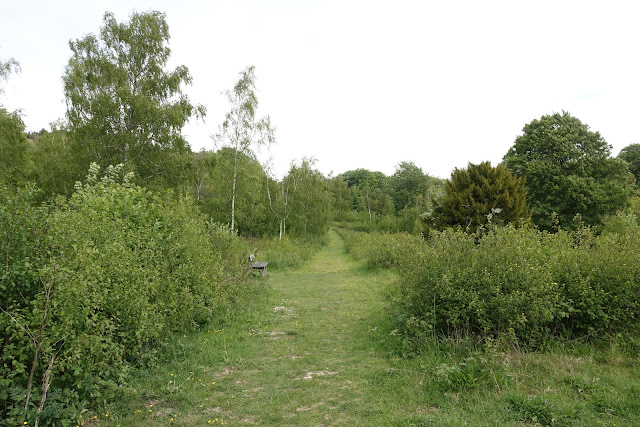 Once at the clearing the wind was howling but at least it felt a little warmer and some blue was showing through. However, as they stay so close to the ground it was actually not a problem to find the Dukes and several were found on the main path where with a bit of patience they would come quite close.  I was hoping for an underside shot and got just that. I was hoping for one on the Milkwort but I never actually saw one land on any flower whatsoever. 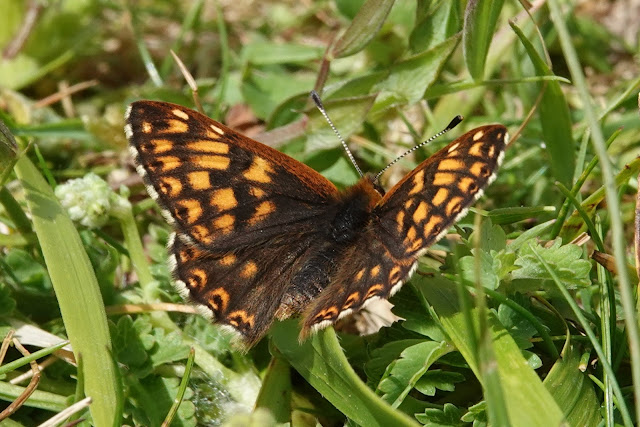 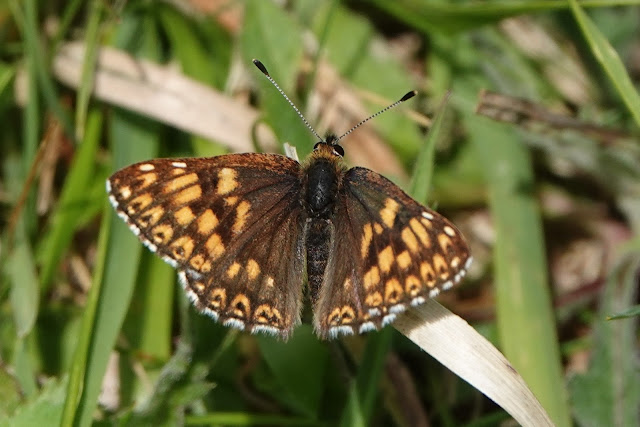 Dingy Skippers and Brimstones flitted around and we encountered the odd Small Heath and Speckled Wood.

From here the path went south towards Bonsai Bank and its Orchids but we had not gone far before we came across our first Lady and Fly Orchids alongside the path with some subtle spikes of Common Twayblade.


A chance glance by Jason found us a Butterfly Orchid hidden about 10 yards off path.  Unusually for the date it was fully open and it appears that we may have stumbled on the only (or another) Lesser BO for the site.  Jason has sent the images off but it appears to have parallel pollinia that are close together rather than further apart and at a jaunty angle as for Greater BO.


Common Spotted Orchid were just starting to show flowers above their densely spotted leaves and Yellow-wort was also just pushing its glaucous foliage through.

Many of the young Wayfaring Trees had skeletonised leaves with small but very fat grubs working hard to remove them.  Some Googling suggested the larvae of a beetle called Pyrrhalta viburni as the culprit.

The path became lush again and banks of Red Campion were flourishing and attended by Green-veined Whites and amorous Brimstones.


There were quite a few micro moths including the striking Olethreutes arcuella and the uber funky Alabonia geoffrella or just Geoff to his mates (who are also called Geoff) along with Mint Moths, Small Purple Barred and Epiblema scutulana.  Silver-Y and Yellow Shell were on the wing too.


While the guys were telling me moth stuff I was sharing fly stuff including the horrors of Cheilosia identification (two species were seen one of which I think may be C.variabilis), the joy of Myathropa florea and the ease of Episyrphus balteatus.  Eristalis tenax and arbustorum, Syrphus ribesii, Helophilus pendulus and Platycheirus albimanus were all seen within the same sunlit sheltered patch. 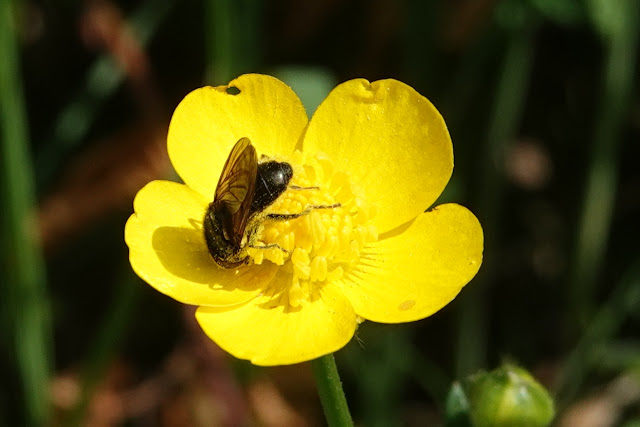 The smell of cucumber from the Salad Burnet and the pungent hit of Water Mint wafted up from underfoot and a pair of what I think are Tenthredo mesomela sawflies engaged in a brief but passionate liaison!

A couple of Ragged Robin were a pleasing find and the odd Beefly and Duke appeared from time to time on the path as well as our first Green Hairstreak.


Turning through the gate took us up onto Bonsai Bank so named for the stunted pines and firs that grow there.

This carefully managed area was an orchid haven and the circular walk gave many opportunities to gawp at the variation in colour and size of the Lady Orchids strewn about the place in vague drifts of colour.  A couple of the spires were huge and even the individual flowers were bigger and more blousy on these plants.  Others were more heavily spotted or even pure white. 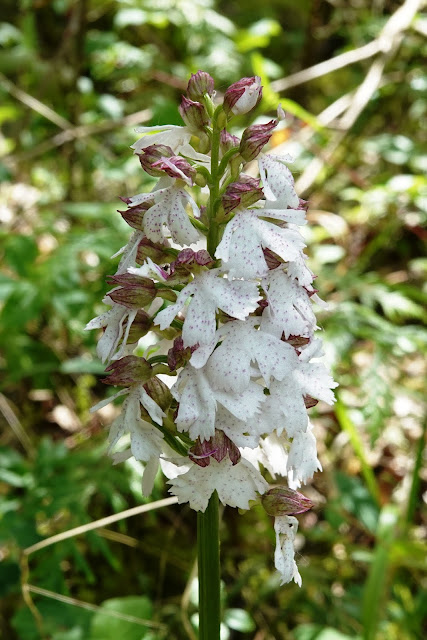 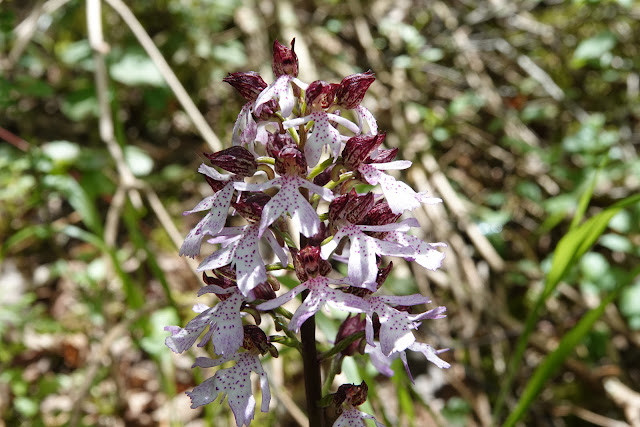 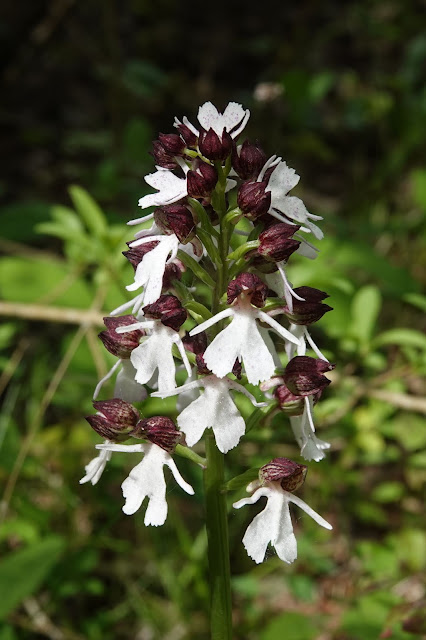 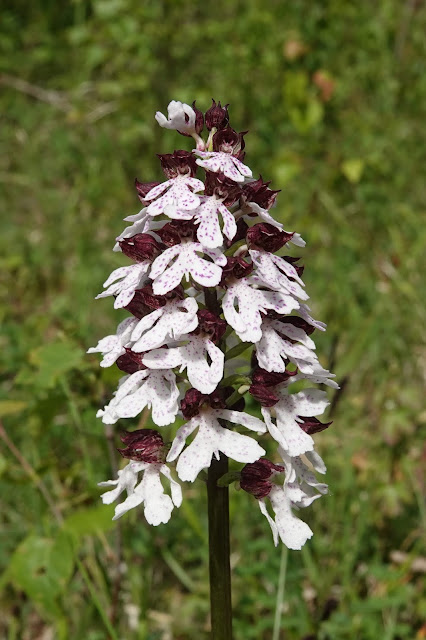 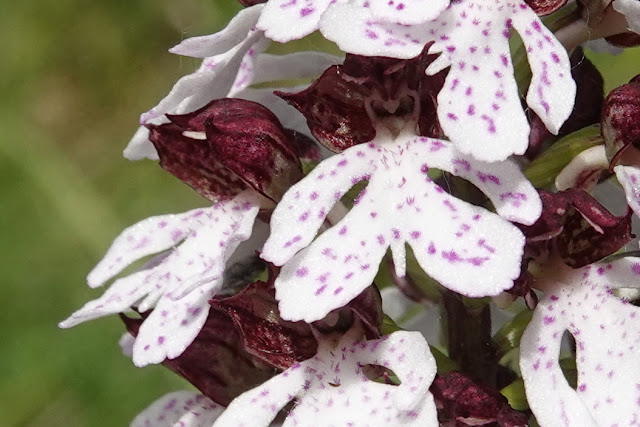 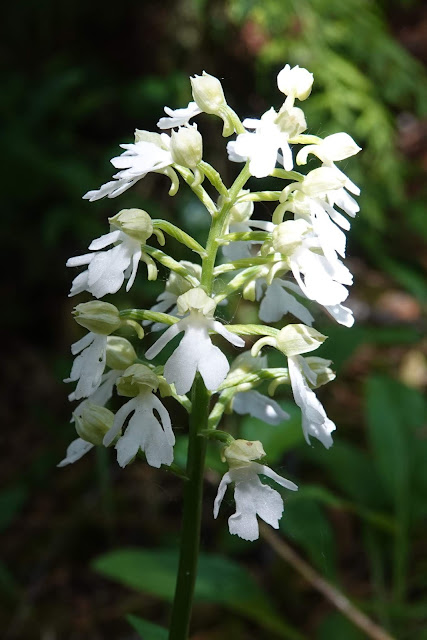 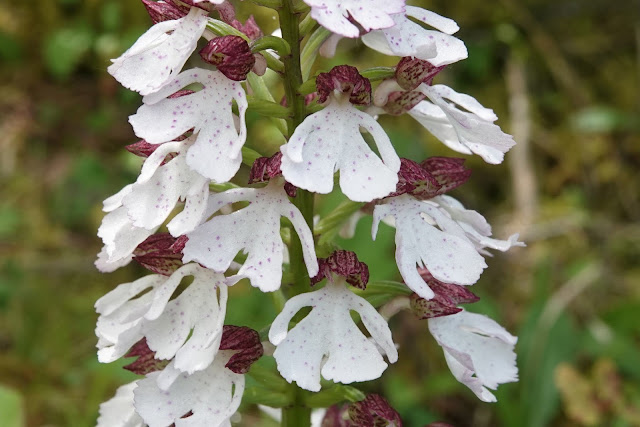 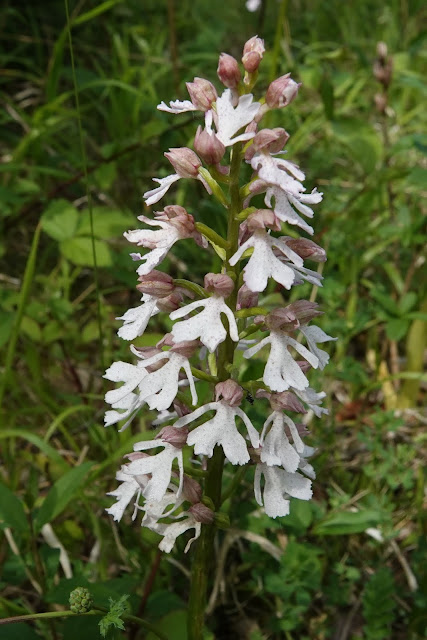 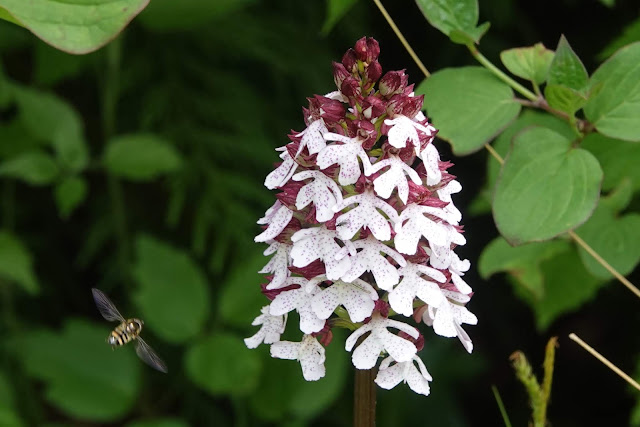 Amongst them we found just a single vibrant Fly Orchid and a few more budding Common Spotteds.  The two spot leaved orchids that we were in flower both had narrower less spotted leaves and on closer nasal inspection were heavily scented and therefore Chalk Fragrant (probably!).


Greater Butterflies were budding heavily and we found one with a couple of open flowers where, if I am looking at the right bit you can see the difference in the pollinia from the earlier specimen seen. 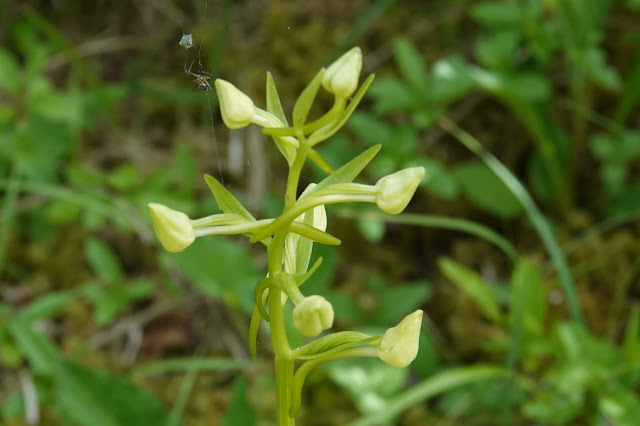 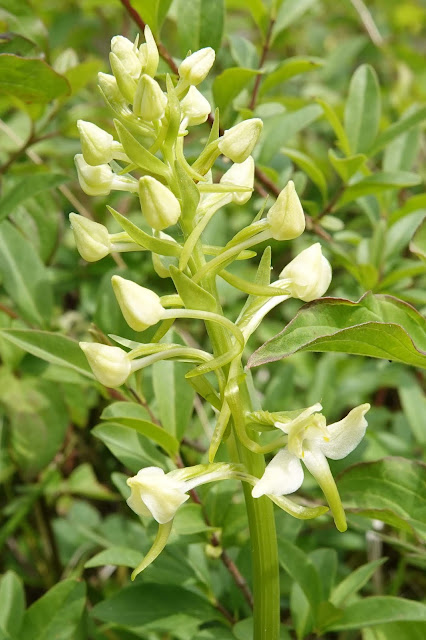 I had only ever seen White Helleborines either tightly budded or well gone over so it was good to find quite a few plants that had opened up enough to resemble a spire of soft boiled golden yoked eggs popping open or perhaps I was just peckish having left my sani in the car? 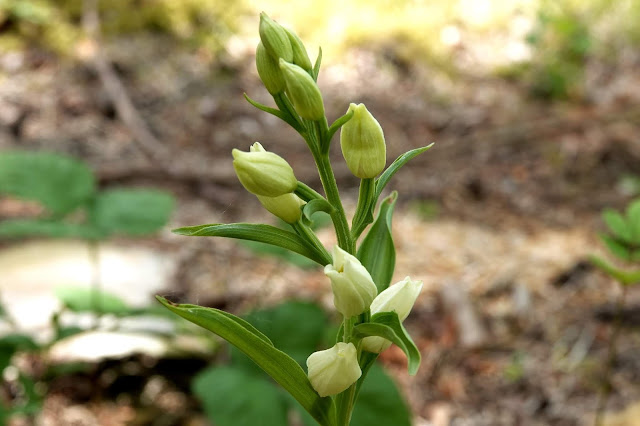 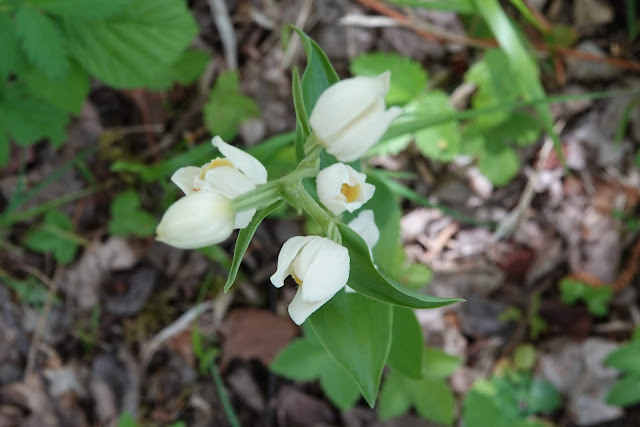 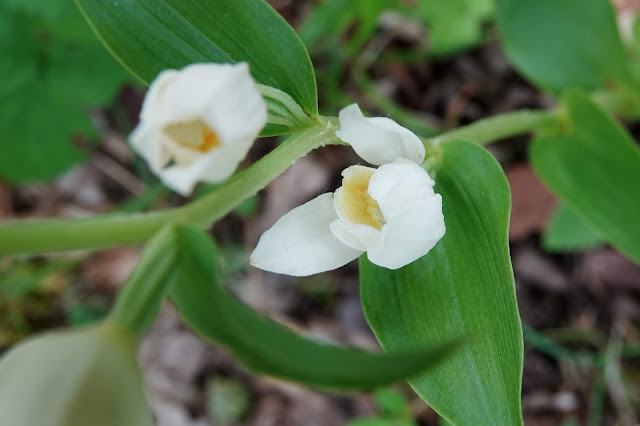 More Dukes and Green Hairstreaks performed and Small Heath, Peacock and Comma were all added to the list as we made our way back to the cars.

Rather bizarrely a female Pheasant crashed out of the undergrowth and threw herself at us like a smaller version of a rabid Capercaillie.  She obviously had young in the brambles and judged us too close for comfort and was making a determined effort to lure us away in a very aggressive manner. 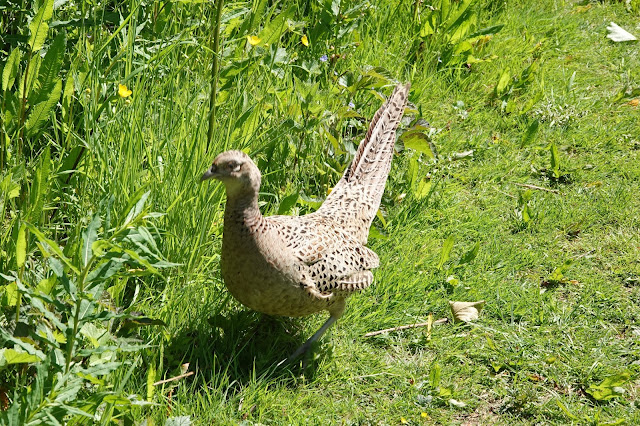 She crashed through the brambles for some way alongside us before giving up after running around our feet with her wings out. Ten out of ten for parental effort!

Two Nightingales sang and the Lesser Spot nest was still noisy when we came back past and I was lucky enough to see a Tawny Owl drop out of the chestnuts and silently drift through the trees.

Nicole and Jason live in Blean and so it would have been rude not to go and have a quick look for the first emerging Heath Fritillaries before heading for home.  It was still early but amazingly there were now five along the ride where they had two yesterday.  They are such perfectly formed compact little butterflies. 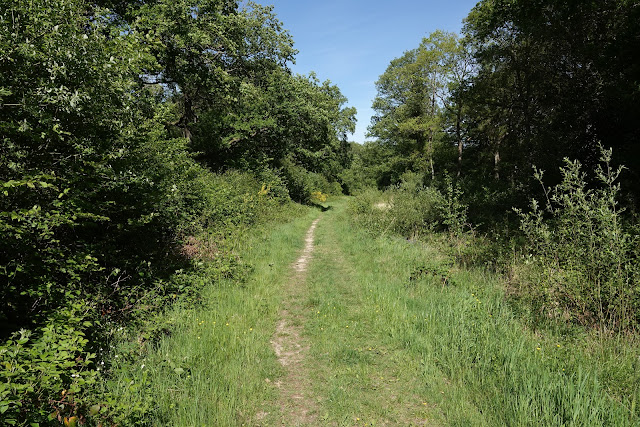 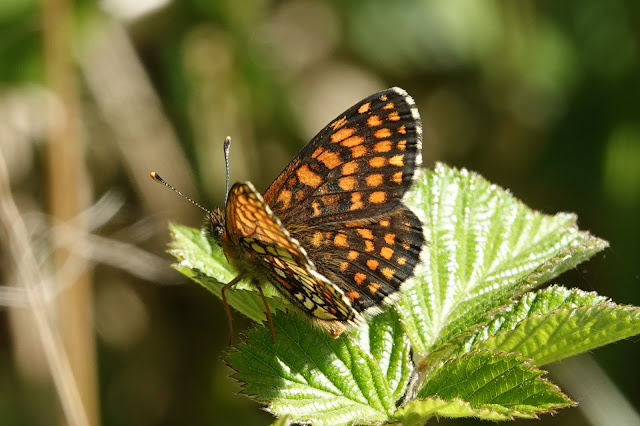 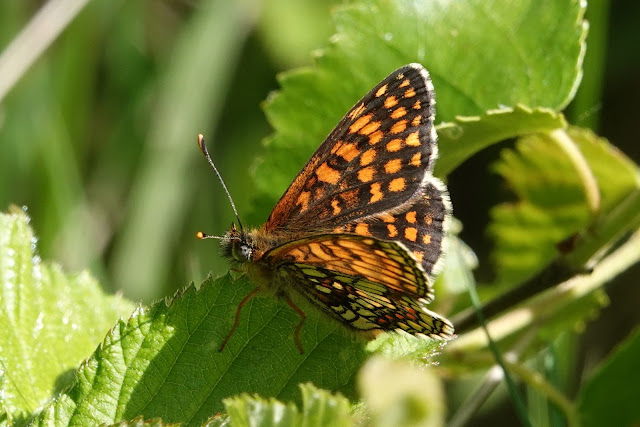 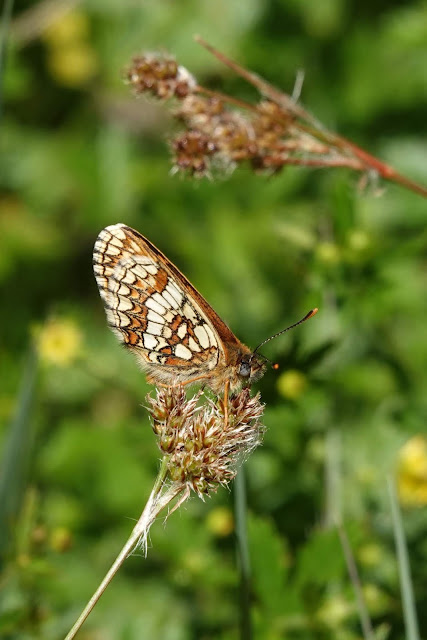 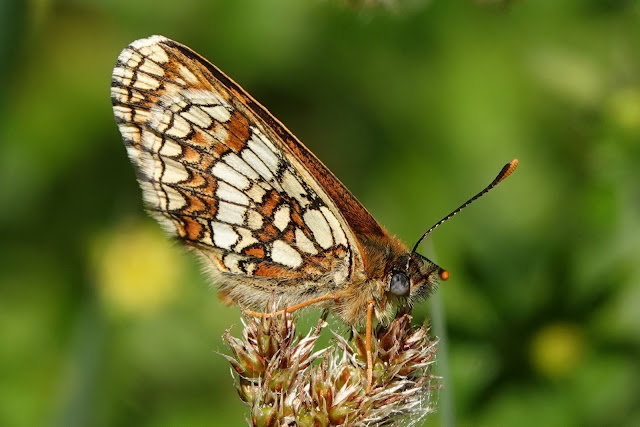 Large Red, Azure and Common Blue Damsels were keeping low in the wind and two Hairy Hawker patrolled the verges.   There was plenty of Cow-wheat flowering amongst the grasses and a nearly ready Heath Frit cat was discovered too.


Jason pointed out some Lousewort in the middle of the path and I found a large Angelica growing in a ditch.


It had warmed up nicely but the day was getting on and so with a calling Lesser Spotted Woodpecker as a final encore I bid my farewells after an unexpectedly fine day made all the better by being safely with friends.
Posted by Howard Vaughan at 14:42