There was a deluge during the night and the air was thick and sticky as we stepped outside. It was still very dark and there was the constant sound of dripping vegetation and the splat of oversized droplets cascading down.  The cloud was where we were so telling if it was properly raining or not was actually tricky. 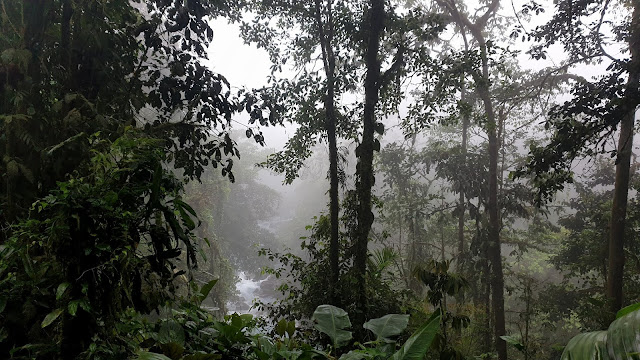 There was the cyclical sound of whichever demonic Cicada species lives here and it was seemingly in sound off with the local Mantled Howlers which were serenading in the invisible dawn.

We gathered at the viewing platform at the start of the two trails and followed the Armadillo down towards the river.  It was wet and slippy and it was a juggle between watching your step, staying on the path, moving quietly and watching for avian movement.

Carmiol’s and Tawny-crested Tanagers were charging around and Russet Antshrike and Chestnut-backed Antbird were seen but it was hard work once again and the target species Steve was after were just not responding. Bay and White-breasted Wood Wrens sang and the latter showed while Nightingale Wrens tantalized us with their off key song once again.  It is probably one of the most memorable of all the sounds we encountered during our trip.

Nightingale Wren and a mystery singer: Put the volume up and close your eyes and if you have ever heard this enigmatic songster you will be transported back to Costa Rica 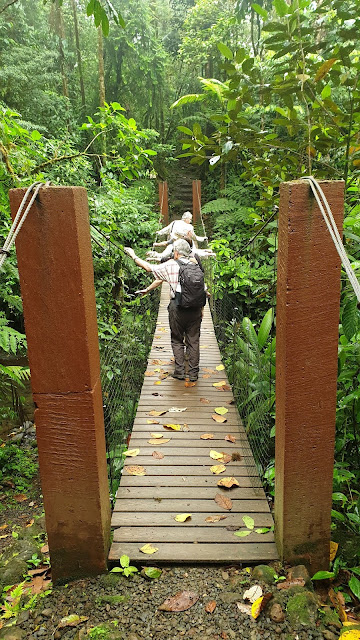 Crested Guans were high up in the canopy and a Gartered Trogon was singing.  We really needed longer but breakfast was required prior to our day out and so we headed back the way we had come.  Dad and I were at the back and discovered a patch of birds high in the canopy of a fruiting tree but by then everyone else had yomped ahead with breakfast in mind.
Collared Aracaris clambered around with Yellow-throated Toucan and Crested Guans and there were the Tanagers and Warblers up there too with Chestnut-sided and Tropical Parula seen and a Blue-headed Vireo which was another one of my twenty years ago Florida birds. I kept seeing some rotund green birds that I took to be female Manakins and then a male hopped up. He looked all black and had a gleaming snowy cap – a White-capped Manakin.

We left the flock to continue feasting and headed back up for our own where Black-cowled Orioles, Black-cheeked Woodpeckers, a single Monty O, Buff-throated Saltator and a splendid Olive-backed Euphonia joined us on the adjacent table.

A Long-billed Hermit zipped in and another new Hummer – a Band-tailed Barb-throat briefly did likewise.  A Capuchin and Coati also dropped in before it was time for us to head off for the day.

Once back at the main road we crossed the Rio Celeste and pulled over to pop back and look at a stripy Fasciated Tiger Heron that was defying the speeding blue waters to hunt from a rock mid river.  It’s feet must be super scaly underneath to hang on in that flow. 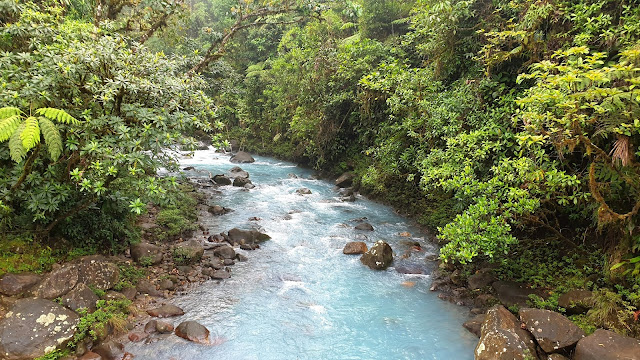 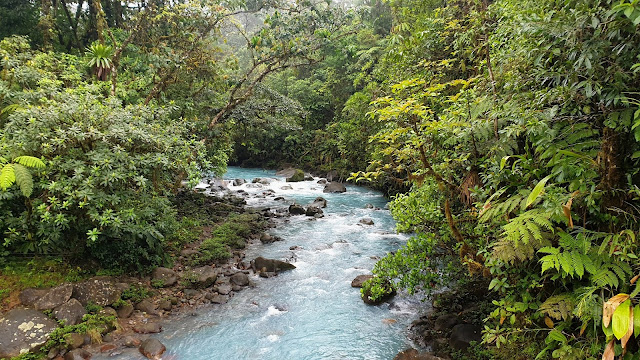 Viewing from the bridge was somewhat dodgy so we did not linger long and were soon on our way to meet a local guide who had dangled a Motmot shaped carrot in front of Steve last night...

We met our chap in town and followed him up the road a little way, back into the foothills (passing some locals rescuing a Sloth that had come down to earth in the middle of the village green).  Inca Verde was our destination and the shower we drove through stopped as we got out.

After negotiating lunch we were taken on a stealthy walk along the trails through fairly formal garden to start with, with Northern Waterthrushes and Chestnut-sided Warblers flitting about and Scaly-breasted and Rufous-tailed Hummers whizzing around. Grey Chested and White-tipped Doves moved off in front and I found a couple of Groove-billed Anis and Northern Rough-winged Swallows over a paddock along with a punky Brown-crested Flycatcher hawking from a bough. 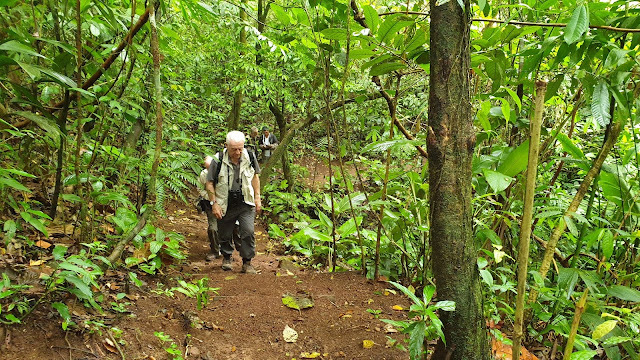 Our target here was the incredibly difficult Tody Motmot – much smaller and duller but in every respect a Motmot albeit very shy.  Seeing this would bring up a full suite of six Motmots for the trip – not something easily achieved. The guide was true to his word and quickly found one perched up not far in front but it soon dropped out of view and I had a tense few minute wait till it resurfaced. It was sitting in the gloom and was actually not bothered about us but rarely stayed put for long.
Somehow, given the light, Steve C got a shot off while I was too busy trying to ensure that we had all seen it.


It some respects, given its shape it reminded me more of the White Whiskered Puffbird than any of the other five extravagant Motmots that we had seen previously. 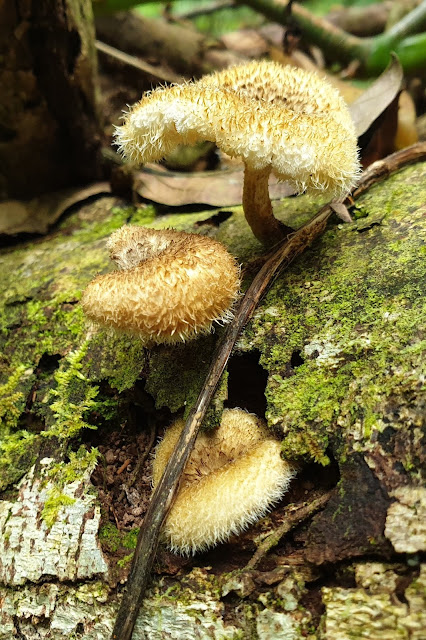 We circled quietly through the wood and chanced on a very showy pair of White Breasted Wood Wrens that were singing and collecting nest material and a Lesson’s Motmot gave itself up  which was an excellent stroke of luck because not everyone saw the bird at Buena Vista before breakfast on the first full day.

After narrowly avoiding a brief downpour we settled in for our splendid lunch while watching Hummers whizzing between the extravagant Heliconias and Ginger blooms. Giant Morpho and Owl Butterflies flounced around flashing iridescent blue and huge eyes and several smaller species alighted for a change. 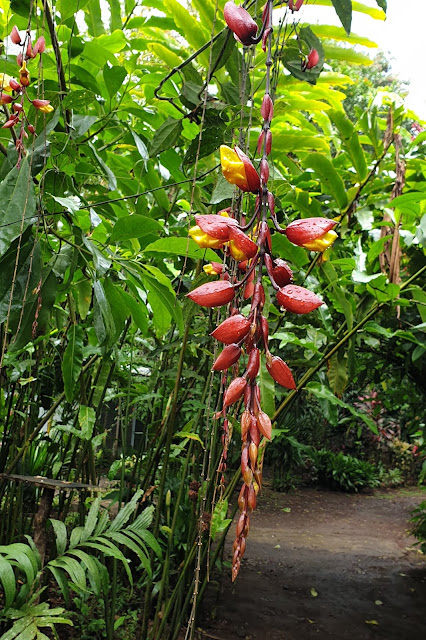 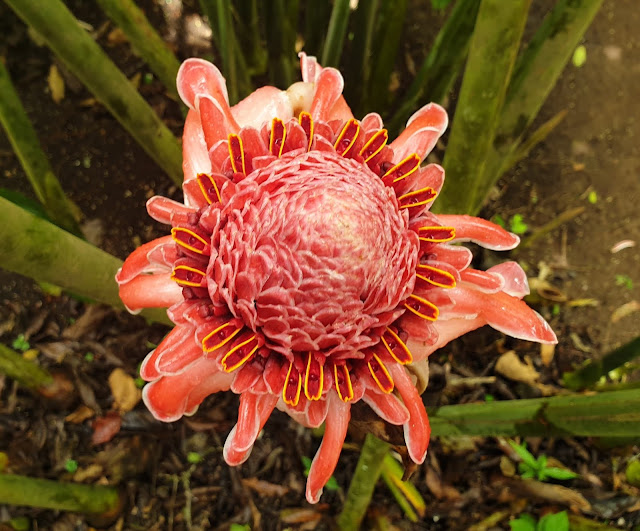 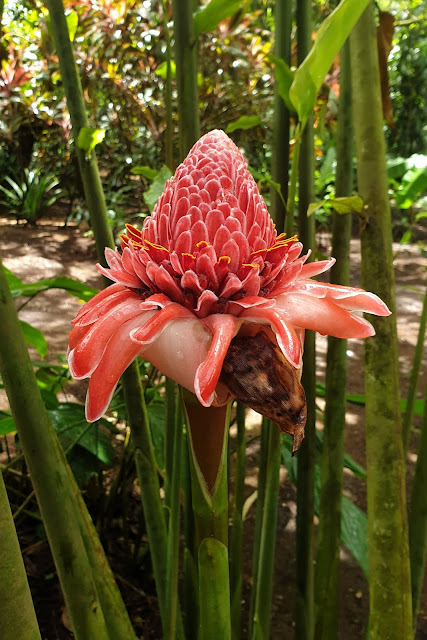 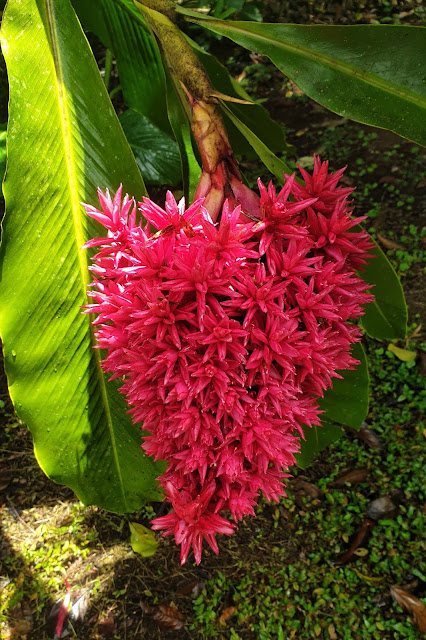 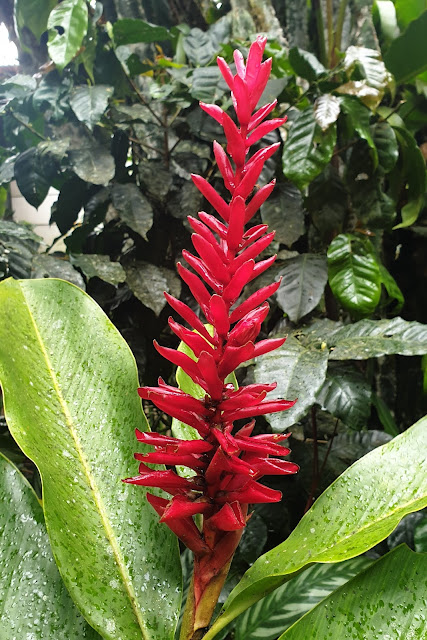 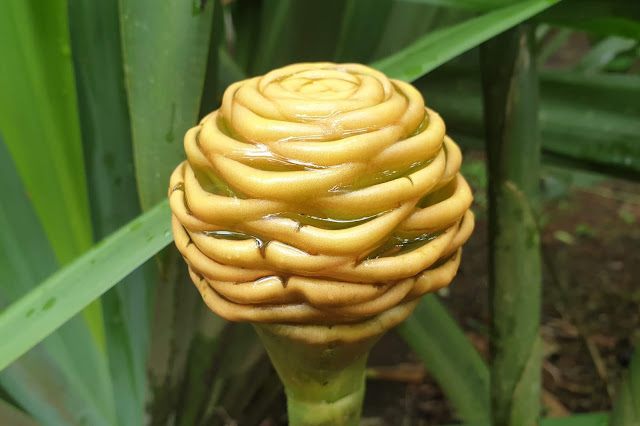 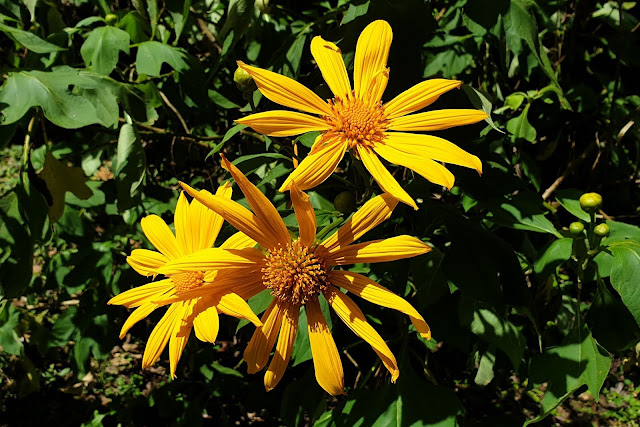 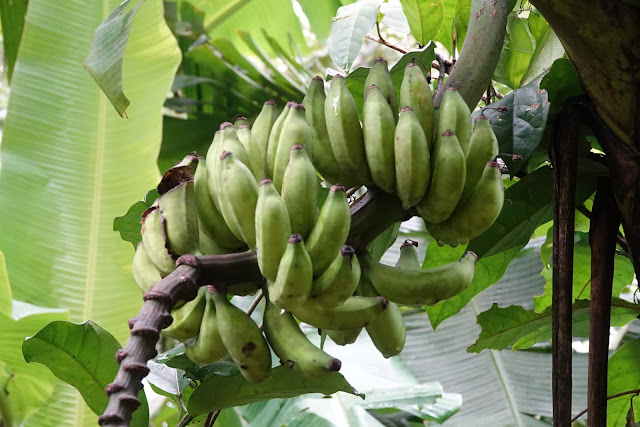 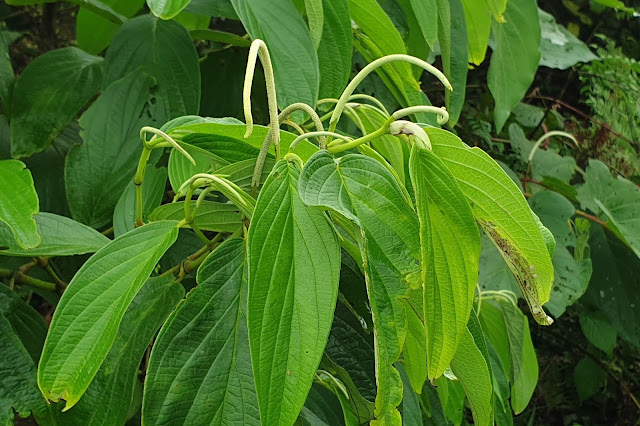 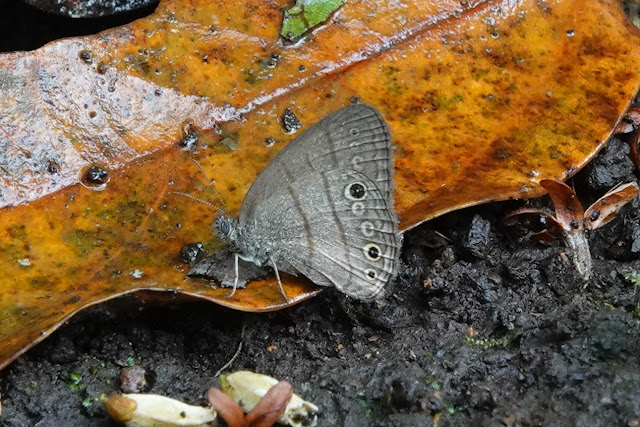 A larger species of Anole lizard watched us from a trunk but was always ready for a quick escape.
With some time after lunch available Steve b and I ambled back to the Tody Motmot spot but there was no sign but we did see a delightful Ovenbird walking around the flower beds like a little clockwork orange crowned pipit and a Violet Sabrewing dashed up and down a pathway in some sort of territorial display.

Onwards and back towards the hotel with a stop at an isolated roadside garden stuffed full of all the things that Hummers like.  It was a most worthwhile stop with Blue-throated Sapphire, Rufous-tailed, Ruby-throated and Stripe-throated Hermit all nectaring while some impressive bees – one a Bumble and one a Carpenter I think did likewise.


A Grey-crowned Yellowthroat put on a great display as he worked his way along the hedge and a Yellow-bellied Elaenia popped up in the bare tree opposite and showed off that odd split double crest for all to see.


Ramon had been tasked with finding a White Hawk and at last did so and this majestic pied raptor circled noisily overhead before being seen off by a very agitated Grey Hawk. Small Swifts were careening up and down the valley at low level and both Vaux’s and Grey Rumped were amongst them.


A second stop and amble down the road saw small groups of Grassquits and Seedeaters in the verges and a pair of Crested Caracaras loitering around some cattle while a small herd of Water Buffalo watched us from the other side of the road.  Red-billed Pigeons flew over and three Swallow-tailed Kites were in the cleft in the valley.  It looked like imminent rain so we boarded the bus and headed back to the Celeste Hideaway.


It started to spit with rain when we got back but Dad, I and Angie decided to head back out down the Armadillo Trail with brollies in hand. A set of step led off the main path to another river look out and we diverted down them just as the heavens opened.

Brollies came out but I was already soaked but what an experience.  The blue waters of the Rio Celeste roared below me and the skies emptied above me and the leaves and paths ran with rivulets of not overly cold water. The ground steamed and for the first time I really felt like I was in proper rain forest. It took my breath away.

Again - put the volume up!

With the steps now becoming a minor cascade we headed back up the top and Dad turned back in the lessening deluge.  Angie and I pressed on in the gloom to the second bridge along before also turning round but we gave it ten minutes before doing so as the rain had largely stopped and it would give time for birds to come out on the path if we were lucky. 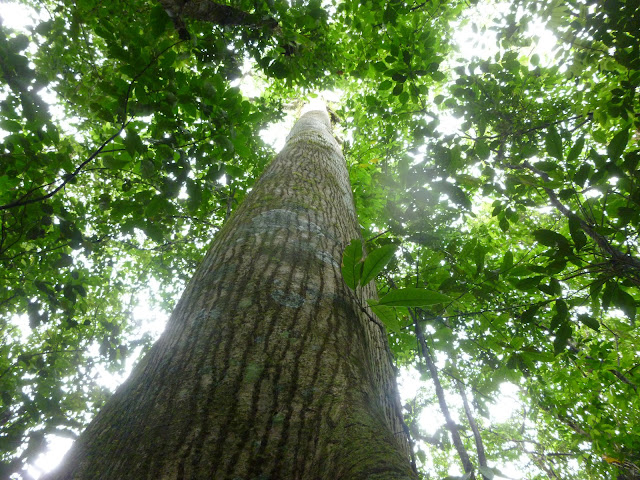 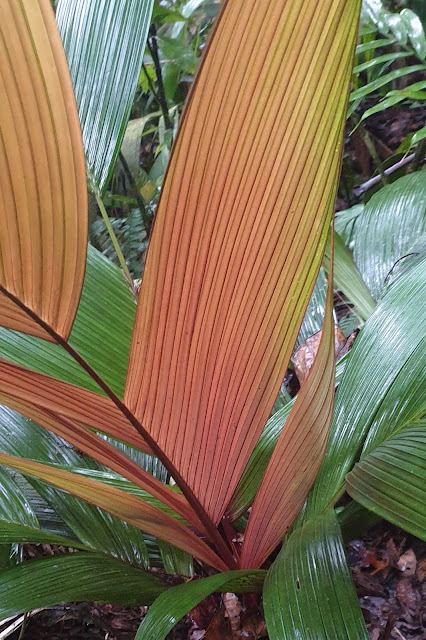 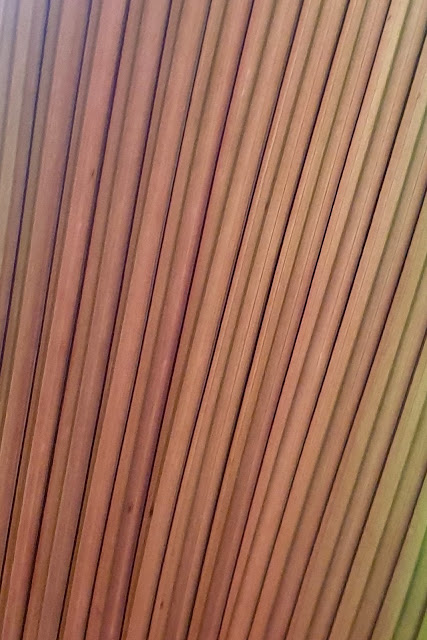 Five Wood Thrushes did just that and we also encountered Spotted and Chestnut Backed Antbirds and what we were sure was a singing Tody Motmot back into the forest.

Two birds appeared in front of us, one clearly a large Woodcreeper and the other not.  The Woodcreeper was preening on a trunk and trying to dry out but we got all the salient features to identify it as a Spotted.  Once I had worked out that the second bird was a Foliage Gleaner with creamy buff superc and under parts and rusty wings it was a case of consulting the book to add Buff Fronted FG to the list too. Two self found new birds in the same tree – quality.

The Crested Guans were noisily crashing around in the canopy and a singing male Blue Black Grosbeak showed well to us on the last bit of the climb back up where dinner beckoned after another long but rewarding day.

With dinner and log done we went frogging and discovered the pointy nosed Rocket Frogs still on their lily pads but with a pair of Red-eyed Tree Frogs and several very spiny legged (and as yet unidentified) Toads for company. Steve found the best beast of the night with a very large Eyelash Viper high up a palm on the hunt for frogs.