That pesky mosquito ensured that I was up early for a look around the gardens of Hotel de Campo  before breakfast.  It was still too dark really but you could see the eyes of Spectacled Caiman all across the lagoon where the villagers were fishing yesterday.  The usual heron assortment were present and the Spot Breasted Wrens were singing well. Two Grey-headed Chachalacas dropped in to say good morning. A swift meal and then we were off just a few minutes down the road to the jetty for our early morning excursion along the Negro.

It was calm and idyllic with just the soft phut phut of the boat and the birds.  Cattle Egrets were still leaving their roost trees and Green and Amazon Kingfishers flashed by while Hoffmann’s and Lineated Woodpeckers were in the riverside trees. 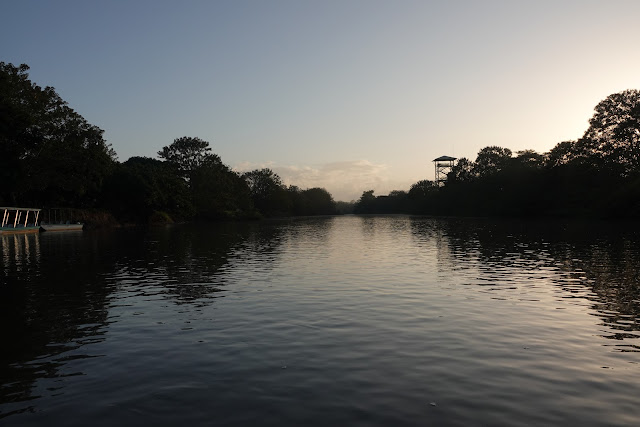 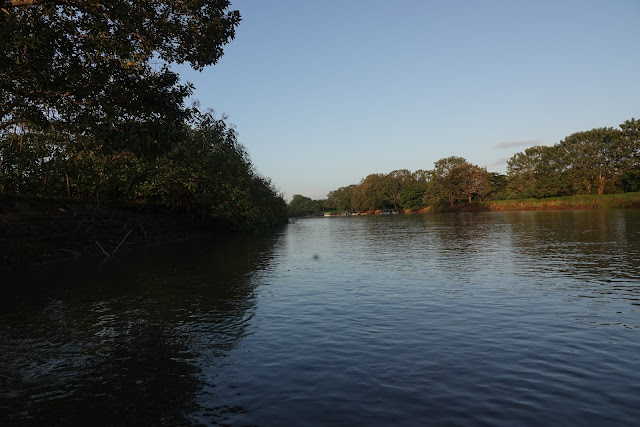 Green and Bare-throated Tiger Herons lined the shores and we encountered three juveniles of the latter which gives you a much better idea of where the Tiger part of their name comes from.  For me these stripy bitterns were one of the best birds of the trip. 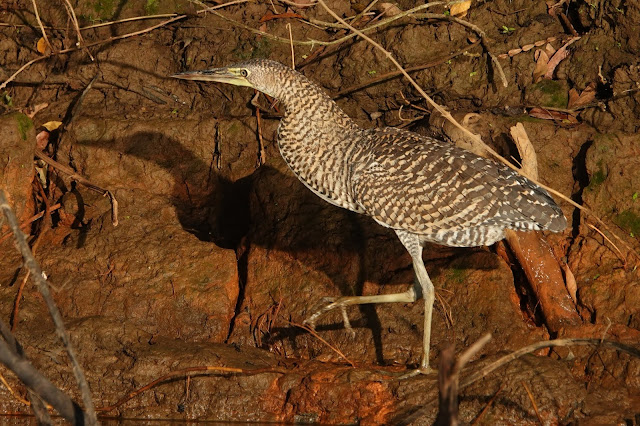 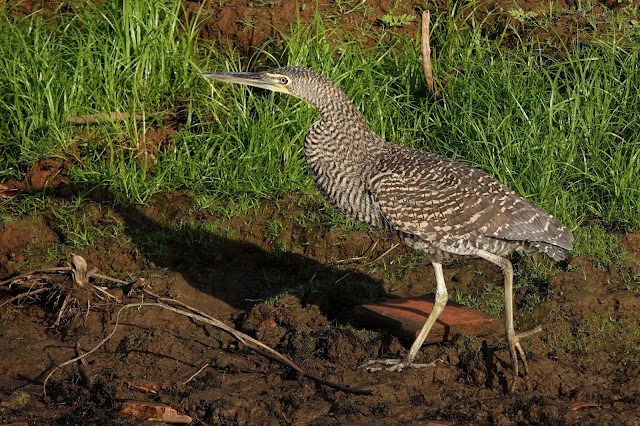 Red-lored Parrots, Finsch’s, Olive Throated and Orange Chinned Parakeets fed in the flowering trees although I never saw them sharing a tree and Orchard Orioles and our first Greyish Saltators moved through the trees.


Spectacled Caiman lined the banks and looked far more agile and elegant than the monster Crocs from the Tarcoles although calling a three metre lizard small is to do them a disservice.
What I presume to be Black River Turtles appeared from time to time and the tree tops were decorated with huge Green Iguanas collecting some vitamin D.  Not one of them was green in any shade.

Anhingas and Neotropic Cormorants surveyed us from overhangs and it was good to find another couple of Boat Billed Herons as well as the usual commoner fare.


Out first stop took us to a viewpoint where you could imagine a vast marsh in the wet season.  It was now largely dry but there were White Ibis poking around and loosely with them our first Green Ibis with their half-size legs. 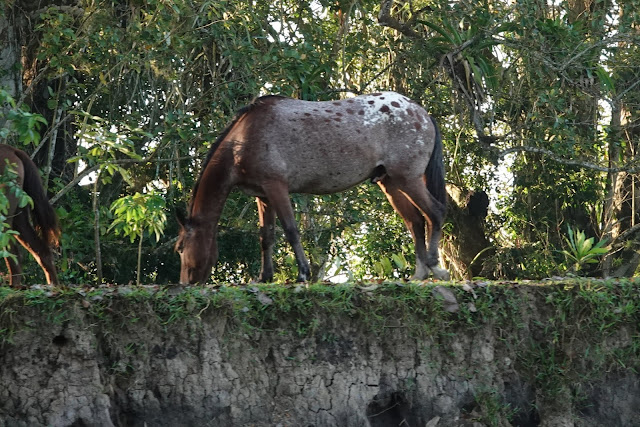 Solitary and Spotted Sandpipers, Northern Jacanas, Southern Lapwings and Black-necked Stilts fed in the channel and Clay Coloured Thrushes, Great-tailed Grackles and a pair of Bronzed Cowbirds hopped around the greensward.  The male Cowbird had a very puffed out nape and truly Devilish eyes!

Tropical Kingbirds and Yellow-bellied Elaenias came down to snatch prey and Ruddy Ground Doves erupted from the edges.

A quick walk through an education centre and we were soon watching a Common Potoo on his day roost, trying hard to blend in with his chosen trunk.  These birds look so different to when they are out hunting.

Back on the boat and we passed a pair of Ringed Kingfishers and a snuggled family of Groove-billed Anis a got a more prolonged view of a Golden Olive Woodpecker.

The river branched and we headed up a narrower tributary and almost immediately a Sungrebe surfaced alongside and calmly drifted past. I had no idea that it was going to be so small being about Teal size I suppose and although it looked quite drab there was actually a bluey sheen to the crown and hind neck. Being in the water meant that we could not see the stripy feet but just seeing this tricky species was enough. 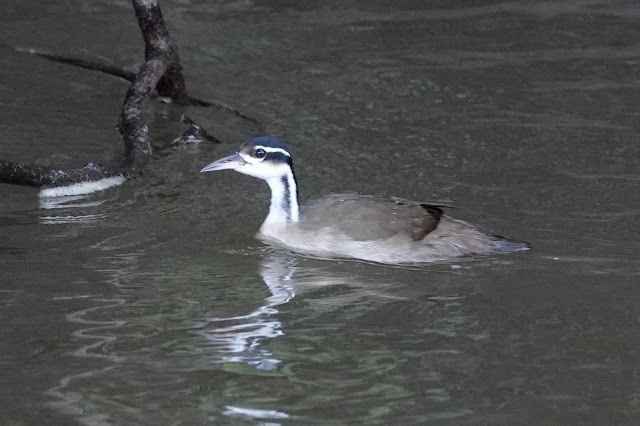 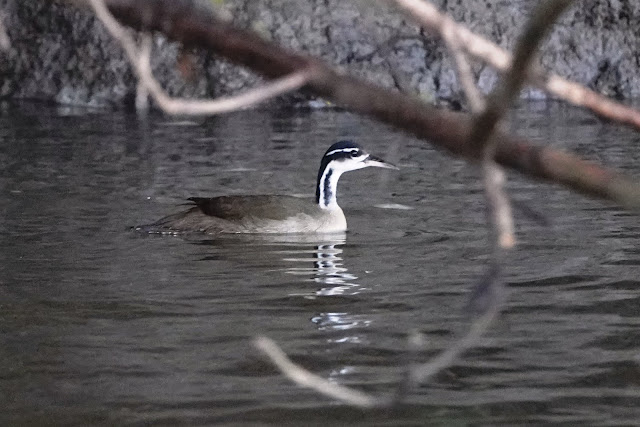 We moored again a little further up river and wandered along a raised trail which turned out to be very productive with Barred Antshrikes showing very well along with a rather plain Canebrake Wren with a big supercillium. 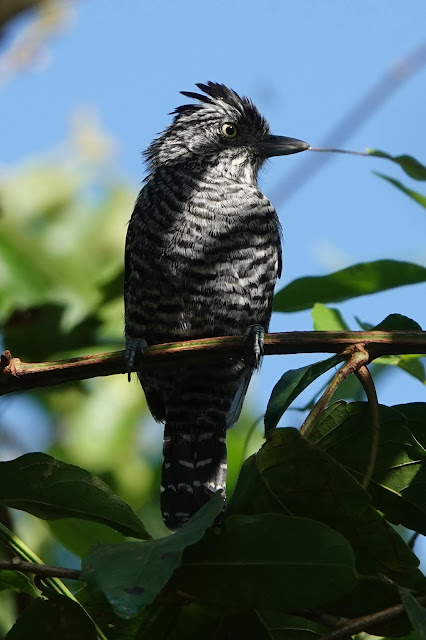 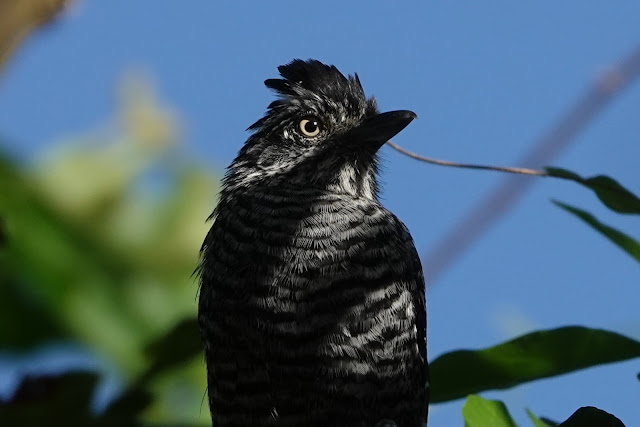 Two White-throated Crakes crept along at our feet with a couple of glowing Prothonotary Warblers for company and a seriously grumpy Roadside Hawk shouted down at us and did lots of hard staring.  A tangle of liana strewn trees looked good to Steve for Olivaceous Piculet and voila there they were with four of this tiny woodpecker clambering around the vines.  They were olive coloured with fine head spotting and I could see an orangey spot on the forecrown of one.  White could be seen in the tail but it did not feel like outer tail feathers and more like alternates?


A Large-billed Seed-finch briefly sat over the path and Chestnut Sided Warblers were calling. 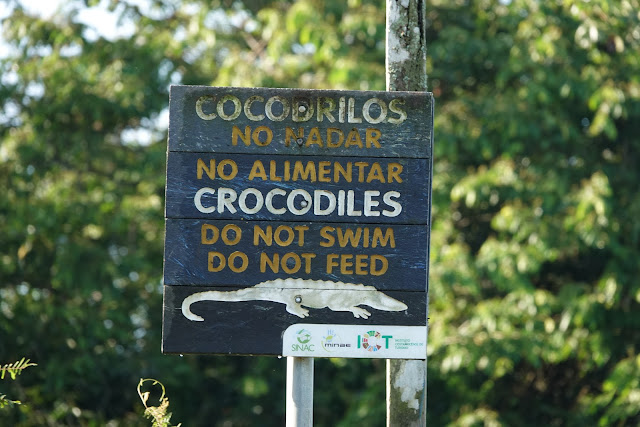 We came to another big wetland view and a scan round added Pectoral and Semi-palmated Sandpipers to the tally along with Least Sandpiper, Stilts and three Greater Yellowlegs.

Green and White Ibis were in the pastures and Roseate Spoonbills and Limpkins could be seen further back. 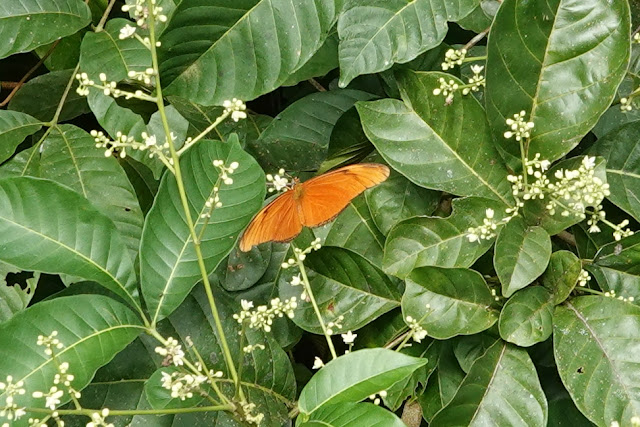 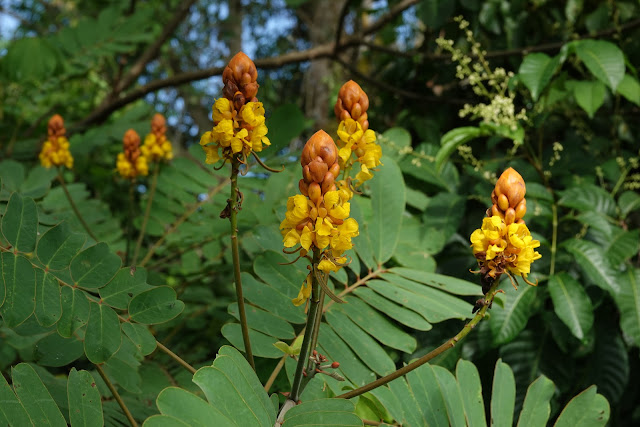 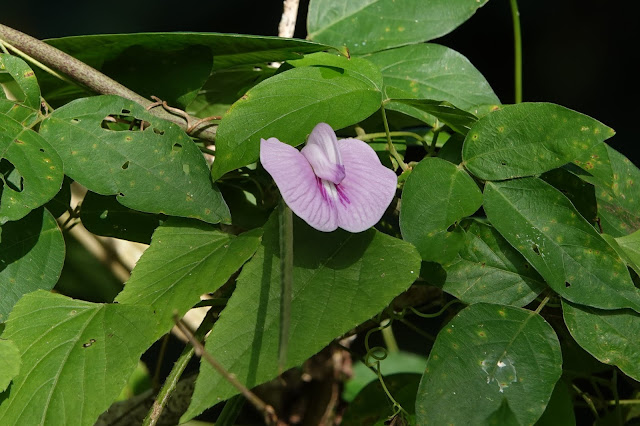 A female Blue Ground Dove perched up and gave a good prolonged view although we passed it off as a Common at the time so I think that some of you may have just got yourselves an armchair tick.  Amazingly a steely grey male Blue Ground Dove whizzed past under our noses!

The same view held a small flycatcher that came close enough to give itself up as a Northern Beardless Tyrannulet. It was a skittish little thing and was soon on the move again.
I looked round and picked up a Mangrove Cuckoo trying to demolish a caterpillar in the grass.  It stayed put and at least everyone managed to get onto it this time which was a relief.  A Northern Waterthrush tiptoed through the same grassy patch.

Up above there was a huge push of Turkey Vultures and with them were no fewer than 23 Swainson’s Hawks but not one Broad-winged.


With such a good thermal it was not surprising that Northern Crested Caracaras, two Jabirus and some Wood Storks decided to go for a ride too.

At the end of the path was a sign and on that sign was a Black Collared Hawk decked out in chestnut tones. Have just noticed in my rubbish picture that there were one each of Black and Turkey Vulture on the ground underneath so presumably something had succumbed!


The end of trail overlooked a huge wetland area with Caiman and horses dotted around and we found both Yellow-legs and some Stilts but the time was pressing on and we had to start our return journey. 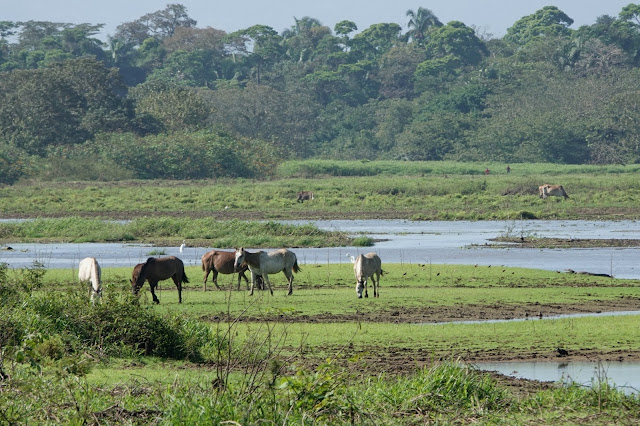 The species encountered were almost the same on the way back with some more good views of the three Kingfishers, various herony things and a Rufous-naped Woodrail.


As we disembarked a large flock of Wood Storks circled overhead but I am unsure as to whether they are also migratory like the passage Turkey Vultures?  A Tropical Pewee hawked from a stick and very trusting fisherman was up to his armpits in the lagoon where we had seen Caiman on the way in. 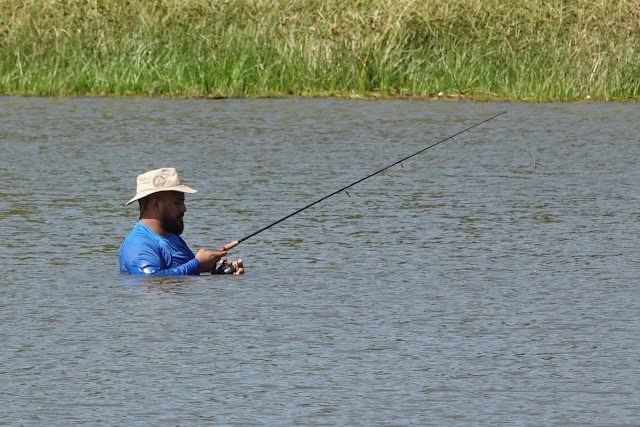 Back to the Hotel de Campo for quick pack and departure with a quick scurry around the gardens adding Yellow Warbler, Grey-headed Dove, Streak-headed Woodcreeper and two confiding Olive-throated Parakeets before I got tooted by the bus with six and a half minutes still left on my birding clock.


We had a long journey ahead of us which to be honest was largely uneventful with a couple of Lesser Yellow-headed Vultures early on and Osprey and Roadside Hawks along the way.  We did get stuck behind a couple of sugarcane tractors trailers and trucks weighed down with oranges and not long after we had passed the last one we stopped for a toilet brake at a cafe renowned for its huge Green Iguanas that loiter around the front entrance like a pack of very well armoured bouncers. Meanwhile I took some shots of the Grey-breasted Martins on the wires before we moved on. 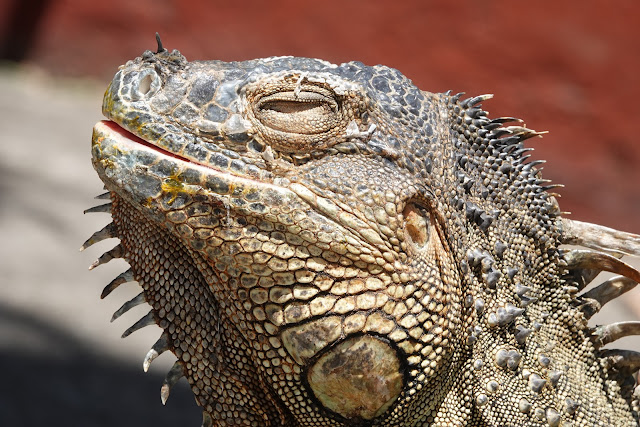 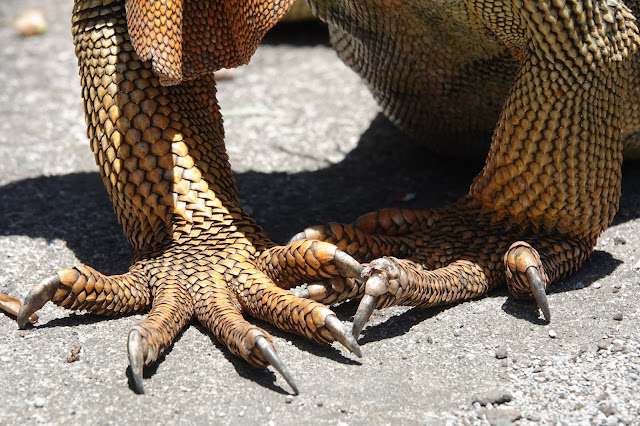 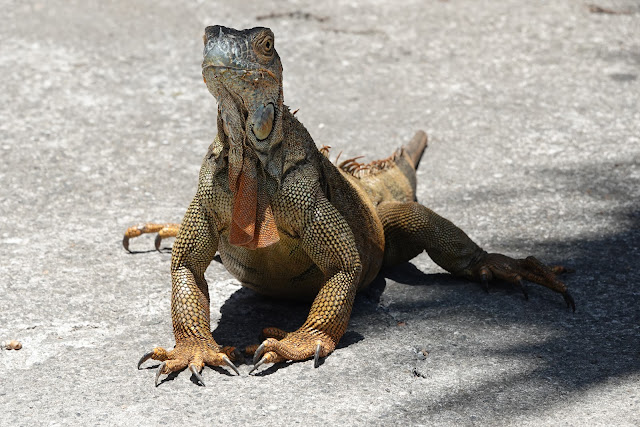 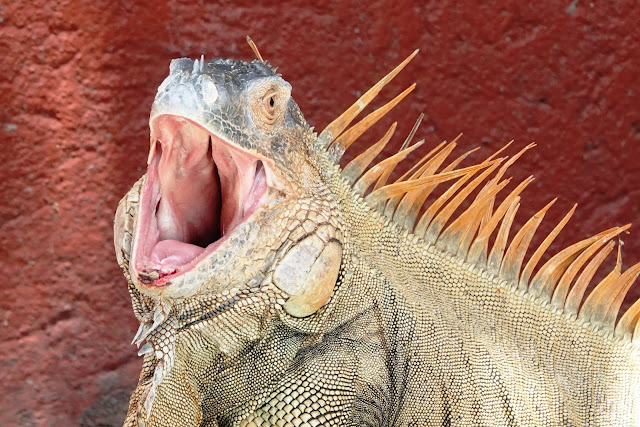 Lunch was a laborious affair and the food was nice but it took another 90 minutes out of the day and by the time we arrived at Tapirus Lodge in the Braulio Carrillo national park it was getting late. We were greeted by a Three Toed Sloth (and some staff), dropped our bags off and met up quickly for a forest walk.


It was quiet but we did see White-breasted Wood Wren, Tawny-crested and Carmiol’s Tanagers, both Toucans and Black-throated Trogon. All of the specialities were silent and we were after Umbrella Bird if we could.  Steve said that they liked horizontal branches ‘like that one up there with a Nighthawk on it’.  I did the classic double take and called eyes on this big Nighthawk laid out along the branch above. We tried to get everyone on it but rather inexplicably it flew and we were left with a shaky picture and a shared pool of memories to eventually identify it as a Chuck-wills-widow.  This is a passage bird in Costa Rica and is seldom encountered as it often perches up trees rather than near or on the ground.

We had a little time before our dark walk and so spent it watching the Dusk Hawkers dashing around the veranda with several really big Magnificent Megadarners (Staurophlebia reticulata).  Neither ever landed to give us a good look. As it got darker the sound of cicadas filled the air and the whinnying of both Little and Great Tinamous could be heard through the insect drone and what appeared to be a Central American Woolly Possum crashed clumsily through the low canopy.

The local hotel guide took us for a short night walk along the trail we had been on just a short while before which allowed us to get some great views of several frog species including Red-eyed and Masked Tree Frog, Dink and Rocket Frogs and a Litter Toad. We were pretty good at finding stuff and found a black Scorpion, several wolf spiders that seemed to like waiting on the top of handrail poles, numerous Crickets and Katydids but no birds although we did hear a Central American Pygmy Owl briefly. 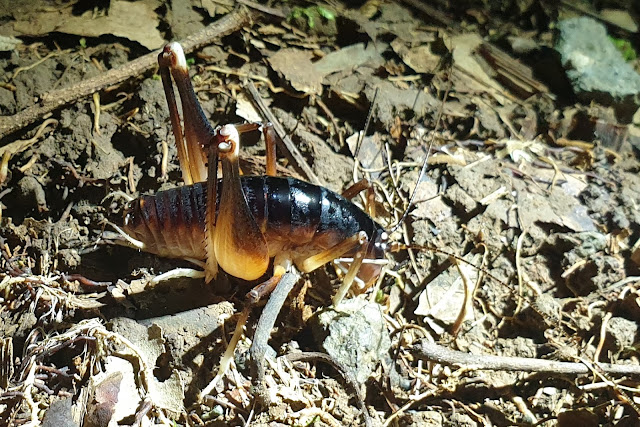 Time for dinner which was interrupted during the log by the Pygmy Owl again and we spent the next hour following them around the complex as they sung from the highest point of almost every single tree.  Trying to find a sparrow sized owl 25m up a tree is not easy and we had to be content with a couple of ‘there it goes’ flight views and the constant singing.

Another bonus was had with a delightful Kinkajou that was making its way down the wires of the cable car before stopping and realising that it had a delighted audience, shyly and trickily did a 360 turn and retraced his steps using his tail as a counter balance and fifth limb.

It had been a long day and those Owls spent most of the night going  ‘pooh pooh pooh’ above our Lodges.
Posted by Howard Vaughan at 07:59