A quiet start to a wet day at work was punctuated by the news of an Empidonax flycatcher sitting on the beach by the fishing boats at Dungeness. All these little New World flycatchers are very tricky to identify but the fact that there was one within 90 minutes was sorely tempting.

I had been fortunate enough to see both the previous Alder Flycatchers. The first in Nanjizel in 2008 was my 500th UK bird and the 2010 bird up Blakeney Point was one of the most memorable twitches I have ever done with the slog up the point in the near dark in truly horrendous conditions...  The walk back with smiles was no less interesting...

The pictures looked interesting but with rain setting in the bird did what I expected and moved inland and was lost. Paul Hawkins joined me in the visitors centre and we slumped in the comfy chairs and looked out the window wondering what to do. Bingly-bong... the bird had been refound in the garden of South View and Acadian Flycatcher was now looking a good bet so I abandoned work (legitimately!) and we dashed down to Dungeness in appalling driving conditions to look for a little American Flycatcher whose identity was still in the balance.

We were soon parked up and traipsing off to join the throng watching the enclosed little garden and within a short while we had both seen it well in the cold persistent rain as it sallied forth from the various items of garden furniture. 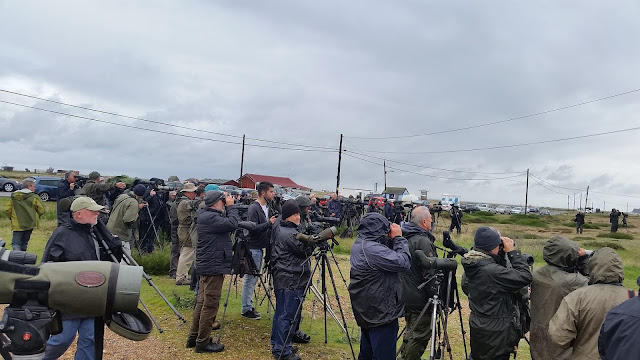 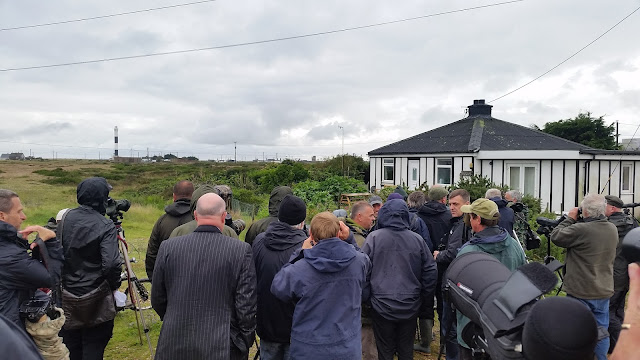 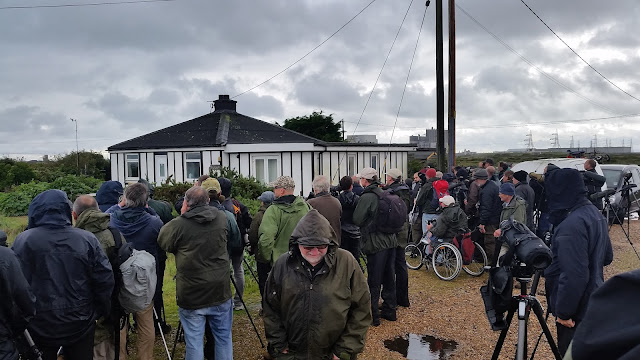 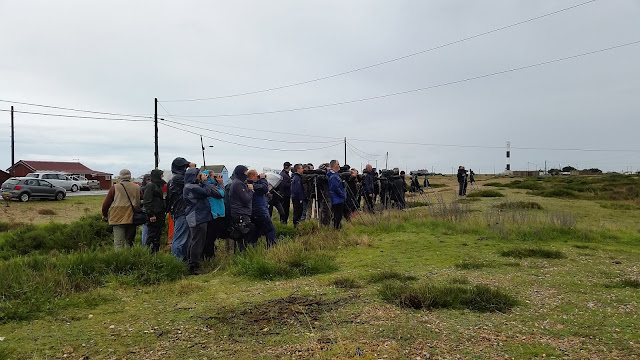 After taking my fill (and palming Paul off on James Lowen for a lift home!) I decided to head for home as the rain had increased but then my car locked my keys inside it... I have to blame someone else other than me being an idiot... 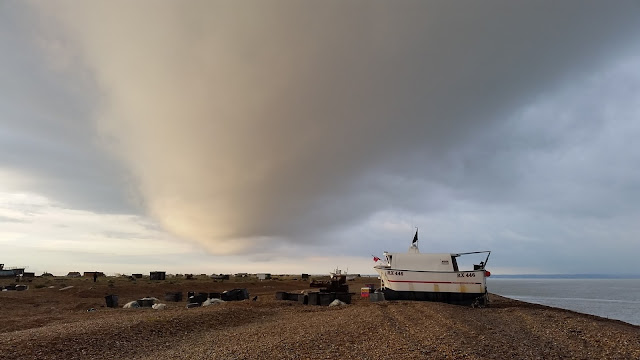 There are worse places than Dungeness to spend the evening especially when in the company of birding friends from across the decades and a potentially new bird to add to my list. 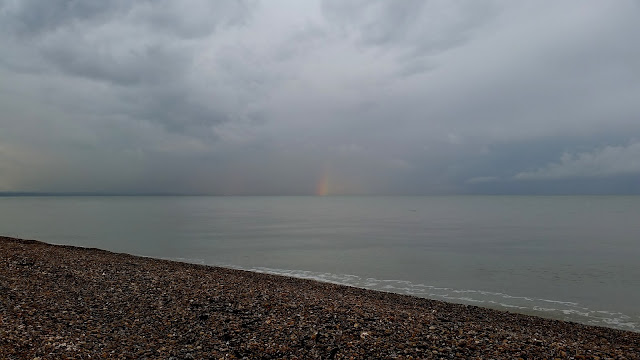 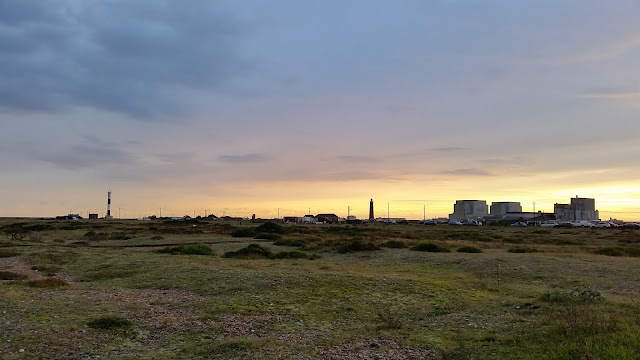 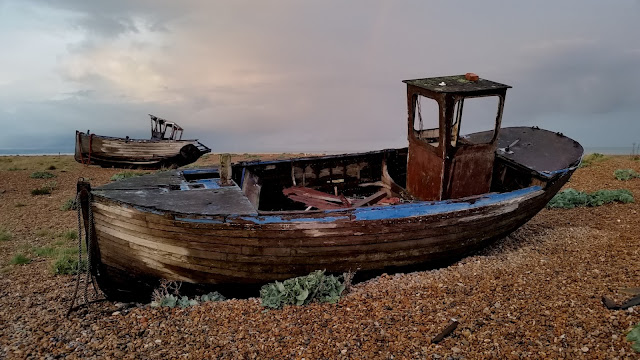 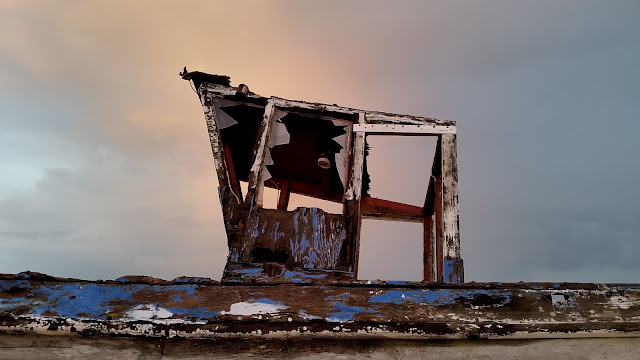 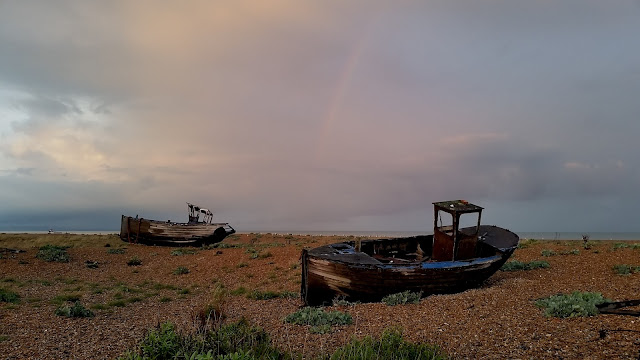 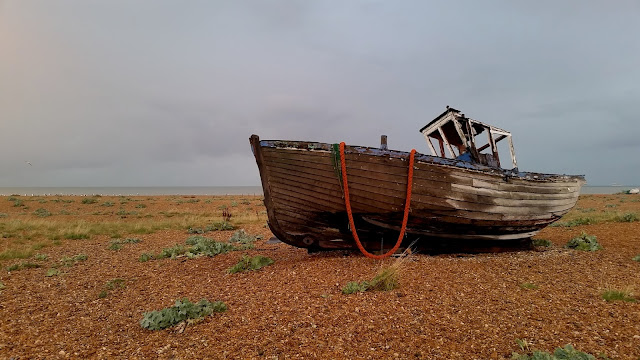 I may have been without my bins now but still managed to grab some better views through Monkey's scope and even snuck in a bit of seawatching as the weather improved. Pom and Arctic Skuas were seen along with many Great Crested Grebes, Arctic, Common and Sandwich Terns and a couple of young Med Gulls. The Porpoises was easily visible on the now becalmed sea and I spent the remaining time taking arty shots of the boats, sea and bruised sky. 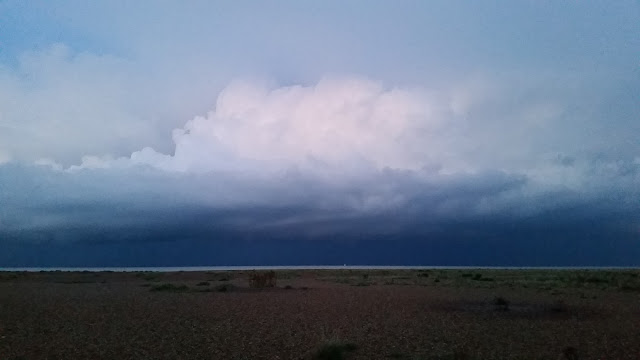 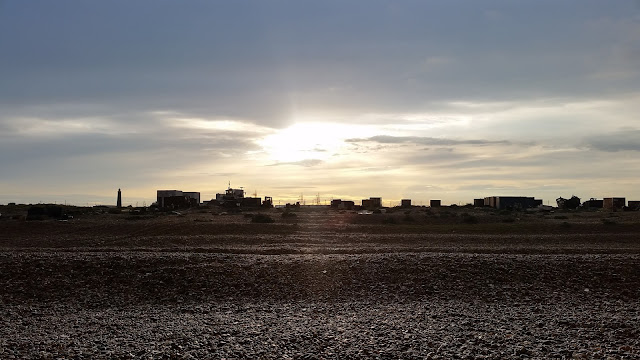 Thomas and Andrea arrived at just after seven with the spare keys and dinner at the Pilot beckoned....
Posted by Howard Vaughan at 11:59 No comments:

An early stroll this morning around the reserve on a glorious early autumn morning was quite productive. The playground and woodland was full of warblers and I was lucky enough to find both Pied and Spotted Flycatchers in the Cordite.  I stayed with the roving tit flock for a while but could not find anything else of note.

Two young Green Woodpeckers played hide and seek in the chestnuts and the Ivy Bees were already active just inside the first entrance.
The Chicory was opening up to the morning sun and the last of the Wasp Spiders were hung out in anticipation of a grasshopper for breakfast and there were several Rhingia campestris in Bindweed flowers.

As I headed out onto the marsh three Corn Buntings flew over high calling - most unusual - they were headed in the direction of the Mardyke Valley and I started to encounter Reed Warblers and plenty of vociferous Cetti's Warblers as well as the usual Wrens, Robins and Dunnocks that seem to dwell in the phragmites.

Black-tailed Godwits dozed on Aveley Pool and the motley assortment of brown eclipse ducks along the back edge contained seven Pintail and a couple of Wigeon. A single Dunlin and a couple of Snipe were seen and a fine petrol plumaged Cormorant watched me suspiciously from the centre post.


A handful of Yellow Wagtails 'tsipped' over and there were dozens of Sand Martins and few House Martins and Swallows hunting over the pools and it was not that surprising that a dashing adult Hobby nearly parted my hair in pursuit of a snack.
Bearded Tits pinged at the Dragonfly Pool and two Sedge Warblers were spooked from the side of the path while a mother Little Grebe was still feeding two large youngsters in the ditch and Wandering Snails were doing just that....


The Thames was calm and quiet with just a nice flock of Teal squibbling along the muddy edge while more Sand Martins skimmed close by in their effort to catch insects in the lee of the big WIllow tree. Ruddy Darters and Migrant Hawkers were hunting low to the ground and eyes down resulted in me seeing a small warbler come up at my feet along the metal and concrete river wall section and flick into a hawthorn. Alarm bells rang for something different and I was then looking at a smart Grasshopper Warbler trying to hide but keep an eye on me. A cracking little bird with beady eyes and chevronned undertail coverts. It even cocked it tail almost vertically like a Cetti's Warbler sometimes does... learn something every day...


A single Swift was noteworthy to finish up a good start to any day...  Now eyes to the skies on a day with a fine easterly breeze....
Posted by Howard Vaughan at 13:44 No comments:


After the exertions of our autumn fair at Rainham on Sunday, I headed down to Dungeness today for some fresh air and hopefully a few birds too. While waiting for Pete and Mark I ambled across the road from the ARC car park to have a look for the Cattle Egret. It was not long after seven and it seemed like almost nothing was up although I could hear chattering from the Tree and House Sparrows in the brambles.

No egrets but countless hirundines already moving and a couple of Chiffchaffs and Blackcaps called. It was also blooming freezing and the decision to stick with shorts and sandals was being slightly rued at that stage in the day!

We walked down to the Hanson Hide past lemon yellow Evening Primroses that were still fully open after their night’s work. Chiffchaffs and Willow Warblers called providing useful comparisons and a Lesser Whitethroat squelchily tacked from the scrub while Cetti’s were back to their boisterous best after the late summer lull. 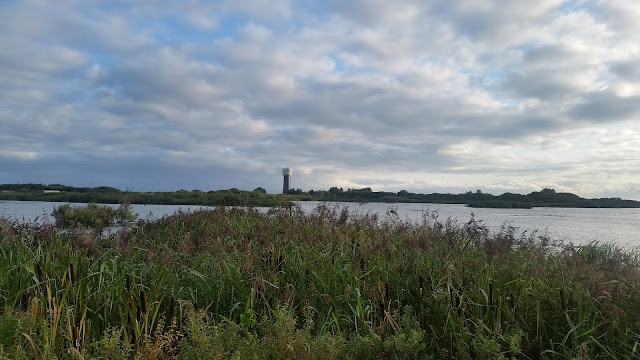 Water levels seem quite high on the ARC so the only waders were Lapwings and a lovely flock of mixed plumaged Golden Plovers musically chatting with each other on one of the islands. There were no terns or large egrets but the number of martins and swallows was immense with thousands present.

The sea beckoned and a forty minute session from the beach produced plenty of Common Terns along with a few squeaky young and erikking adult Sandwich Terns as well as two bouncy juvenile Blacks. A pale juvenile Arctic Skua patrolled the Gannet line half way out and two male Scoter played catch up as they headed east.  More hirundines were trickling along the coast and panic from the gulls suggested trouble and a few minutes later a female Merlin appeared over the waves and seemed to be coming back from a hunting sortie. Alba Wagtails and Linnets fed on the beach and a big flock of roving Starlings did not contain the juvenile Rosy that I still long to find. 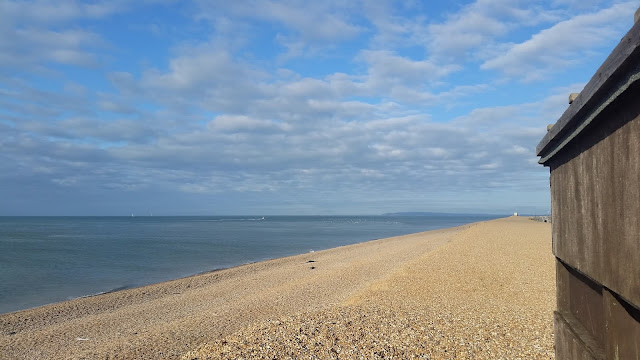 Heading out towards the Obs was actually quite productive with a few Chiffs and Willows, two each of both ‘throats, mobile Black Redstart and Whinchat and Siskin and Yellow Wagtail were both heard overhead.

Back to the ARC and a look in better light from the southern end and after three quick Marsh Harriers, it was straight onto the juvenile White-winged Black Tern as it buoyantly fed across the choppy waters. It was not reported yesterday so I was pleased to have re-found this. Still no Cattle Egret and the Red-backed Shrike along the approach road to the centre had also apparently done a bunk (blame Mark for that one as he always misses them!) but our walk got off to a very nice start with two separate Great White Egrets. It is so nice to come down here and expect to see them nowadays.

The circuit was fairly quiet although we did find another good phyllosc flock with both ‘throats and some engaging Long-tailed Tits as well as pinging Beardies, peeping Kingfishers, a third Great White Egret, two distant thermalling Ravens and some wonderful insects. 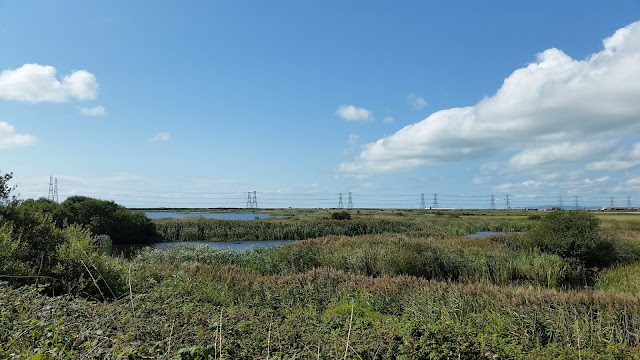 Gatekeeper and Meadow Brown were still on the wing and we saw several Small Heath and immaculate Small Coppers as well as Whites and Red Admirals. There were countless Ruddy and Common Darters and Migrant Hawkers were out in very good numbers but keeping low in the breezy conditions. Southern Hawkers and even a late Emperor were seen but I was surprised to find a Black-tailed Skimmer.

Lunch in the sunshine and then back to the Hanson Hide were much better views were had of the White-winged Black Tern along with a brief juvenile Black Tern and a pretty much summer plumaged Black-necked Grebe. 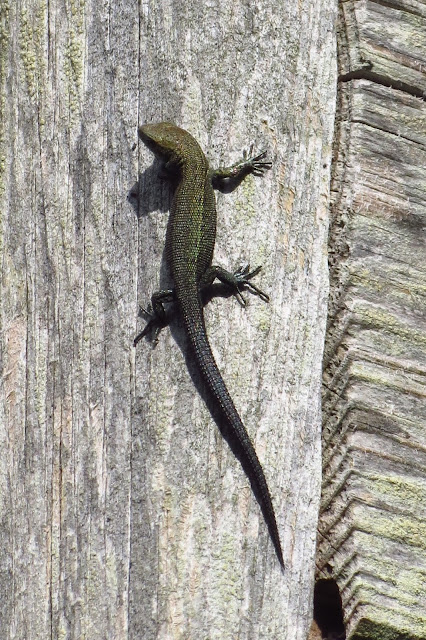 A young Lizard was almost on the roof of the hide in its attempt to access the sunshine and be out of the wind and Speckled Woods danced along the Willow Trail.

A quick stop on the road side for closer tern views had us moved on quickly by an unmarked Police car so we headed down to the Obs again for another scout around which gained us far better views of now two smart Black Redstarts leaving us with just the 'Typhoon' steam train arriving at the station to finish up a fine day in this most captivating of landscapes. 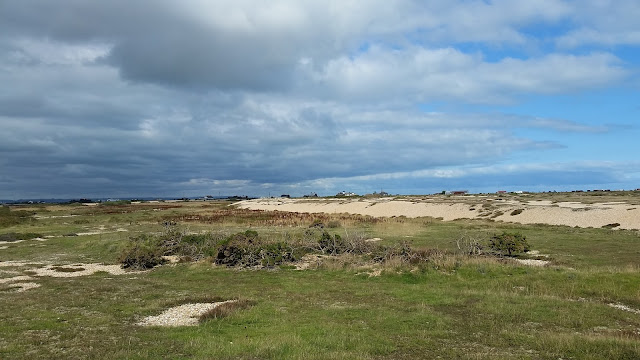 Posted by Howard Vaughan at 12:02 No comments: