Our final day on the Shetlands and after a bacon, egg and mushroon sandwich we packed up and headed out.

It was another breathless, blue sky morning with the sun peeking over the hills as we headed out for a final search. Our first stop at our little spot of sycamores just down the road and unsurprisingly a YBW was flitting around while the next group down hosted a ‘from the window’ Red-breasted Flycatcher that put on a star performance for us. It was so calm that you could hear its bill snap as it caught every fly. Two Otters cruised across the bay and three auk species were after breakfast. 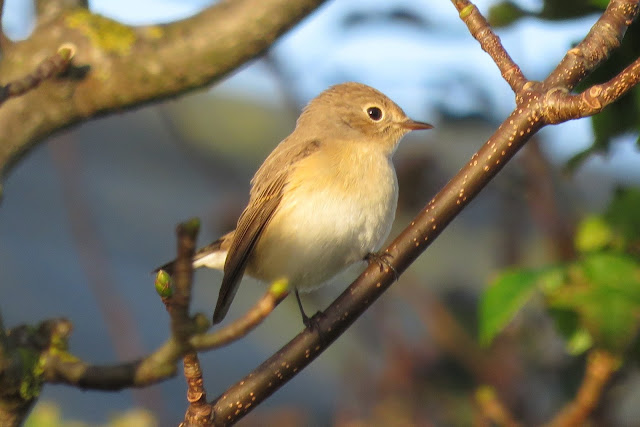 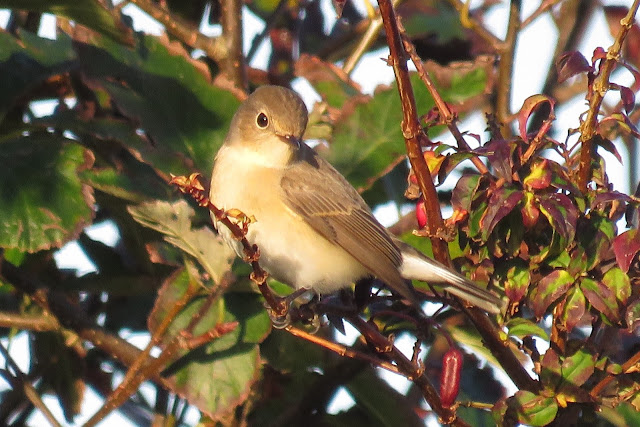 Busta House was windless and it did not take long to find two more RBFlys clicking to each other and three YBWs.


On to the community woodland at Brae where we spent some time tracking down eight interestingly mixed plumage Redpolls that included a couple of pale rumped grey birds. We are still not sure if they were all Mealies or whether was was just a little bit better. The fact that there were five more YBWs was not a surprise but finding our fourth RBFly of the day well and truly laid our run of luck with this species this trip.


A Merlin and Kestrel were exchanging words above the tree belt at Loch of Voe but we could only dig out three more YBWs and likewise at the beautiful Swinning where we found four more. Brambling and Redwings were dropping into the willows but despite looking, the visualised Bluetail was once again not there.

With a few hours left till we needed to be in Lerwick for our boat, we headed towards the Nesting area for a shot at a Pallas’s Warbler. It had gone awol but three YBWs were found and the fields were full of Sparrows, Skylarks, Twite and Starlings. A Dusky Warbler had been found just across the head of the voe at Garth cemetery so we nipped around and quickly connected with this loud ‘tooker’ before a call sent us back round to Brough where the Pallas’s was showing on the roadside as it flitted like a green, yellow and white ping pong ball between the sycamores and cabbages. I never tire of these little gems. The lively discussion between the farmer and couple of local birders did not seem to bother the warbler much despite his banging on a plastic bucket to scare it off while we watched from the road.


Back to Garth where the Dusky Warbler actually came out to play and flicked and ‘tucked’ it’s way along a dry stone wall and even spent some time feeding on the grass beneath the rosa. Wadbister Voe held our first and only large Eider flock with 200 or so in a snaking raft of black and white before calling into the grounds of the digs we stayed in in 2014 at North Hamarsland for our last search of the nice tree belt and garden there. The views were stunning on a glorious autumn evening, Ravens kronked overhead and rather fittingly two Yellow-browed Warblers wrapped up proceedings and took the final total of this most charismatic of waifs to a nice round 160.

The ferry crossing back to Aberdeen was smooth and uneventful and it was a pleasurable southbound journey from there through the beautiful rolling Scottish countryside, punctuated by thousands of Pinkfeet in the fields and across the clear morning sky, a lazy female Goshawk crossing the road and Red Kites through middle England. A look for the Humber Swamphen was unsuccessful and it was at this point that we found out about the Siberian Accentor (a much anticipated first for Britain) back on Shetland and wished our comrades still up there the best of luck in the last couple of hours of the day.
Did that news spoil or taint my holiday? No, not in the slightest. Was I disappointed? Of course... I am a birder and I love new birds and this one was a corker BUT in the fourteen days I had off that started with that day in Norfolk, I saw just over 180 species, got back Brunnich's Guillemot (in the nick of time before it did the Norwegian Blue on me), experienced the hugest adrenaline surge ever as a young male Siberian Thrush flew unexpectedly over my head, witnessed the crepuscular hip swaying of White's Thrush during another mesmerising encounter, got bogged at by a Swainson’s Thrush from inside a derelict building where it sat on an old cooker, saw two each of Brown and Red-backed Shrike, three beady eyed Rosefinches, five ticking Little Buntings, a slalom weaving mouse-like Lanceolated Warbler at just a few inches range, heard and saw so many spritely Yellow-browed Warblers (160 or so) that I hear them in my sleep, resisted picking up tired Goldcrests and popping them in my hat for a warm up, watched a stripy green and gold Pallas’s Warbler hover to pick aphids from the underside of leaves, avoided various dinosaurs to get better views of an obliging Greenish Warbler, listened to the metronome tacking of a skulky Dusky Warbler, the grunting of a fly away Great Snipe, the bill snapping of Red-breasted Flycatchers on a perfectly still morning, the bugling of a Crane over Sumburgh caught in the howling wind, two punky crested Hoopoes (one each in Norfolk and Shetland), a tame Bluethroat deliberately feeding in the headlights of a our car well after dark, a yobbish juvenile Rose-coloured Starling, a Blyth’s Reed Warbler with an identity crises and a host of other enigmatic species. Throw in six Otters, both Seals, four Orca, Risso’s Dolphin, Minke Whale and literally dozens of Harbour Porpoises along with the most astonishingly glorious weather and what more could you ask for other than good company, fine food and local beer? Oh I know... a show of the Aurora Borealis... and we had that too.

I will leave you with a picture from my first walk back around the reserve on the Monday morning... made me chuckle that it so wanted to be photographed

Posted by Howard Vaughan at 21:37 No comments:

A slight lay in this morning saw us on the road just after 8am and I was still buzzing from finding the Siberian Thrush yesterday.  Lower Voe was our first stop and I quickly refound our second Brown Shrike of the trip as it hunted from the wires above the stream where we saw the Red-breasted Flycatcher two days ago. A warmer brown individual than the Aith bird but still that distinctive long tailed, short winged shape. Two YBWs got the day tally rolling before we continued across on the Aith road, stopping to check a few plots en route and adding eight more YBWs and over 250 new-in Redwings that were dropping down off the moorland to feed in gardens and pasture. A few Blackbirds and five Fieldfares were mixed in with them.


After discovering the amazing Hayfield Croft cake fridge by the roadside and making some considered purchases we doubled back and headed north to check out a few far flung scraps of vegetation. 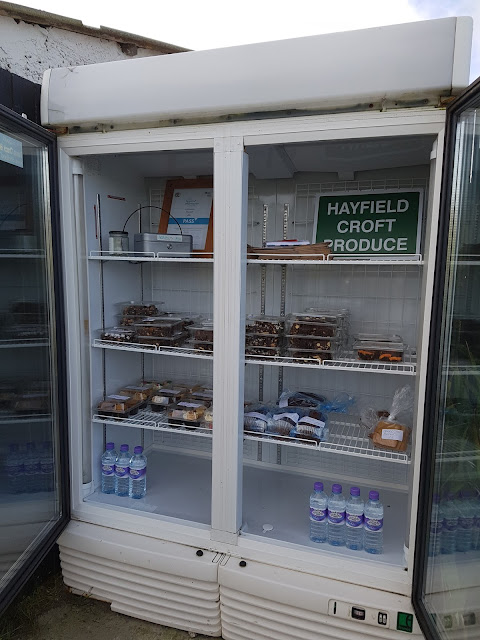 Nine more YBWs took the trip haul to 138 and a monster billed Hawfinch at Orr Wick and three Mealy Redpolls and a Whinchat at North Roe added interest along with both Kestrel and Sparrowhawk and a heap of Goldcrests but not one YBW in the very rare feeling Burn of Valayre just north of Brae.


Brambling had obviously come in and several flocks were encountered including at least 90 with 30 Chaffinches at North Collafirth.

We had been studiously avoiding the White's Thrush parading way up on Unst but at just before 4pm we caved in and left behind the Redwings and Yellow-broweds of Ollabury (and an odd Song Thrush) and embarked on a bit of a dash to connect with appropriate ferries but by a little before 6pm we were back at Skaw and clapping eyes on my third golden spangly thrush. Bob Vaughan and James Lowan were especially delighted to lay this particular ghost to rest. 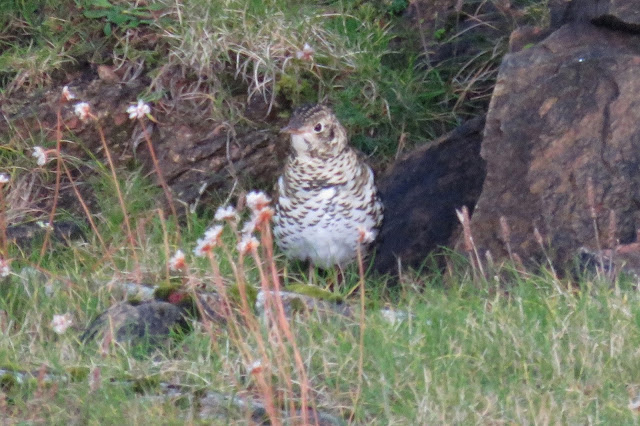 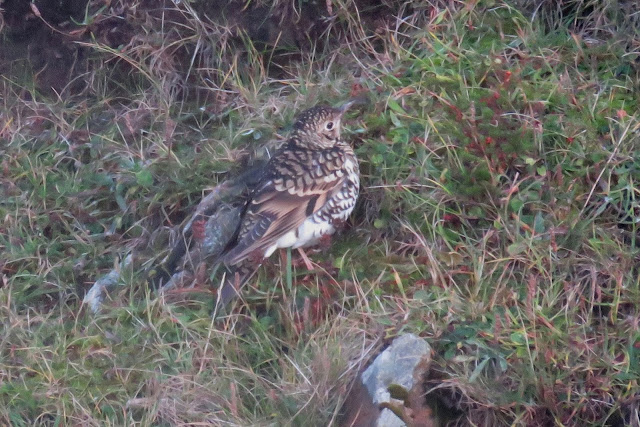 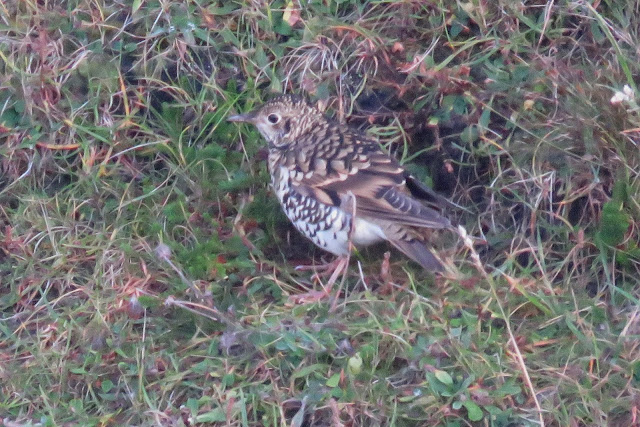 Only a few people remained and as the light fell it became active and we were left sitting one of the most northerly beaches in Britain, in the company of this magnificent bird as it started to feed on the grassy undercliff where once again the magical bob, weave and walk was experienced as it methodically picked up prey. It was a beautifully calm, still evening and we were all very privileged to watch this gentle looking thrush going about its crepuscular activities before we quietly backed away after about an obsorbing encounter. 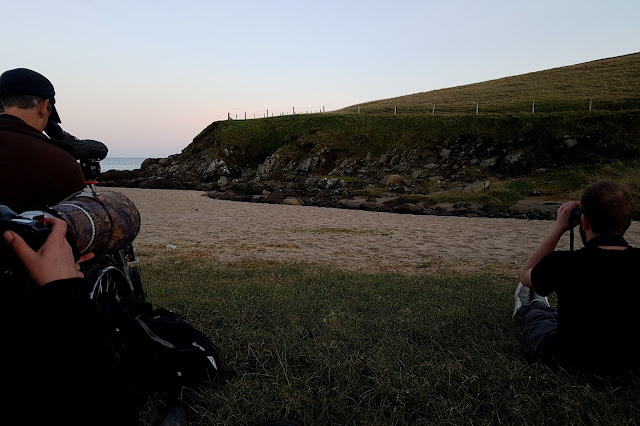 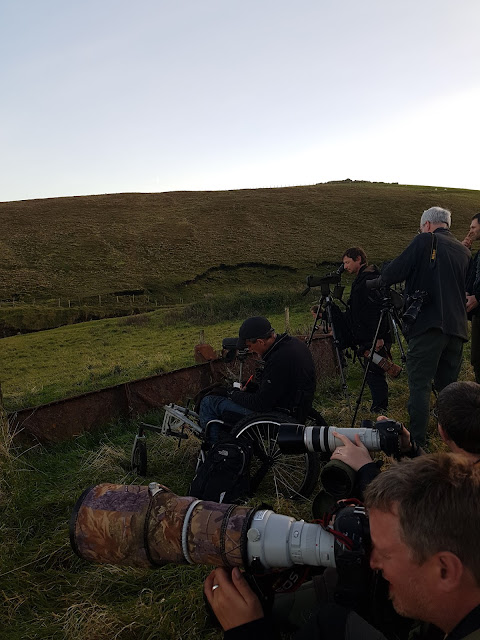 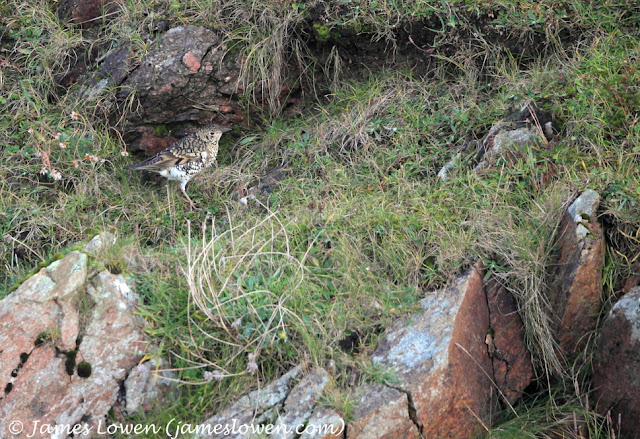 There were smiles all round but there was one more little treat as the crews left site. A Wheatear was seen still feeding in the road as we drove out and then as we entered Norwick another little bird appeared in the headlights... it was a delightful little Bluethroat and we stayed with it till the other three cars caught up and everyone enjoyed views down to a few feet as it actively fed on insects attracted to the lights from David's car. Possibly the most surreal birding experience any of us had ever had. 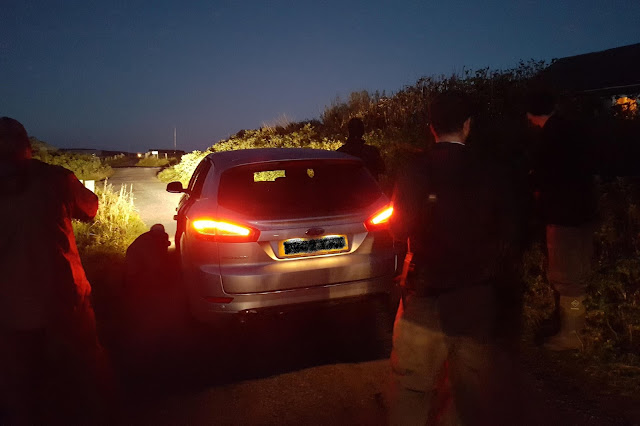 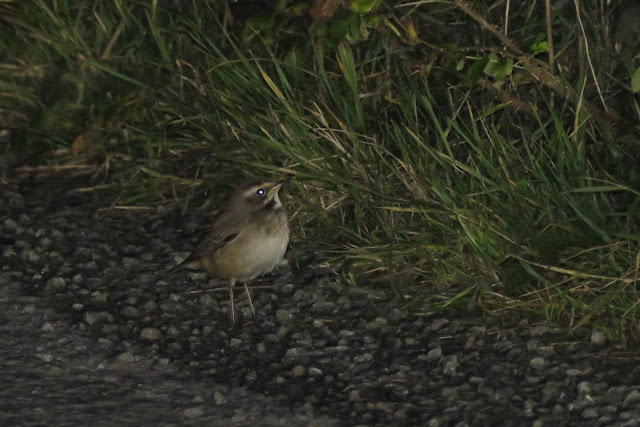 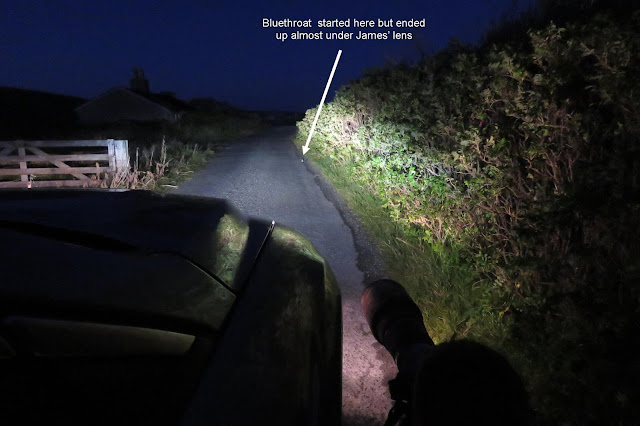 With a wait till the ferry back to Yell, we hit the Baltasound Hotel en masse and chips and a pint were raised to the greatness of Zoothera!

We connected with our subsequent ferries although a tight knit mass of almost completely dark coloured Shetland Ponies loitering in the middle of the road, around a bend, in the pitch blackness just before the terminal almost spoilt the evening but tested first Bradders and then the other drivers brakes who thankfully were not immediately behind us!
Posted by Howard Vaughan at 19:12 No comments: