I have barely been out this month with work taking priority and with little time to wind down but last night in a bid to relax after a mad day on the reserve I fortuetously rediscovered a scrap of paper with a few lines of an invisiged poem called Autumn Is Coming that was born on the way to Cornwall in early October.

So I settled down and completed my journey. The response to the poetry section of my exhibition in the hide at RSPB Rainham Marshes has made me smile and I hope you will enjoy this one too....

Autumn leaves start to look their best
As you wend your way down to the west.
They twirl behind you in your wake
Like some mobile insubstantial snake.

Golden yellow Maples and lime green Ash
Form citrus colour banks that boldly clash
With the blood red Dogwoods and scarlet Guelder Rose
And the pink fruits of Spindle tucked down in the lows.

Mighty Oaks are still largely clad in their green
While the burnished Beeches are a sight to be seen
As they nestle amongst the dark needles of Pine
And the leaves of Gean coloured like Beaujolais wine.

Banks of fiery pink topped Willowherb
Form great swathes right down to the kerb
While sunshine hued Birches shake their leaves
At the slightest provocation from the breeze.

And yet we reach a certain spot
Where Summer cares not a jot
For the cooling fingers of Autumn’s embrace
And refuses so readily to join the race.

And as we enter the true South-west
Summer hangs on and does her best
To keep Autumn’s colours firmly at bay
And let her joyous greens enjoy their days.

But that leafy snake that followed us west
Will have its way and does not rest
And every green will turn and fall
And become a blanket throughout Winters thrall.


Posted by Howard Vaughan at 11:28 No comments:


I had a plan – in fact for me it was quite a well thought out plan – well up until the bit where I left things at home (including my wallet and keys inside the house and the nice bit of board that I wanted to make my bird table top propped outside my front door - it was even still there when I got home this evening).

Improvisation was in order and I found a circular piece of old MDF that used to belong to the base of an ancient shop display and off I went towards the woodland feeders with tools, wood, wire and seed in hand.

It was a truly gorgeous morning with not a breath of wind and Redwings and Fieldfares were arguing over the hawthorns with a new arrival of Blackbirds and several Song Thrushes. Goldfinches were feeding on the Burdock on the Playground and a Kingfishers did what they do best and zipped though like a blue streak of nothing. Two Bullfinches ‘tooted’ in the Ivy by the Mardyke and a couple of male Cetti’s warblers were kicking off.

As my hands were full I headed straight to the Woodland feeders and snuck down through the closed middle path to see how the boardwalk team had been getting on. The bridge had already had a facelift and looked good and was definitely non slippy and the next section was being made ready. Another Bullfinch called and the first Goldcrest was up and about. 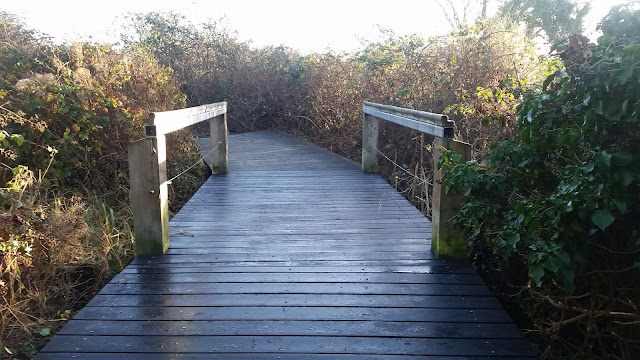 It only took me about an hour to mend the old trunk feeder and put up the new flat table on the live stump of the huge Willow that dad and I took down in the summer and I even added some tasteful licheny branches for more aesthetically pleasing photographs. A Chiffchaff came to visit and tail pumped vigorously. 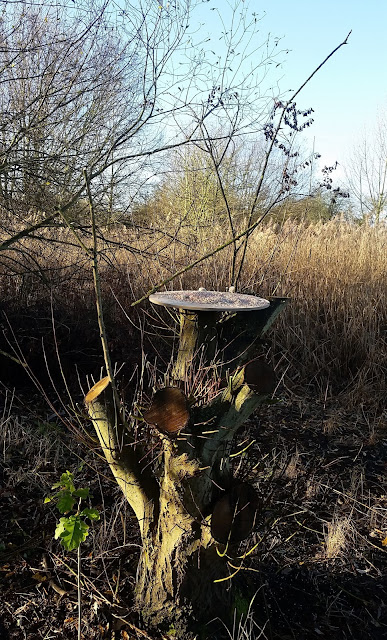 I headed back to drop off my tools and collect my bins and cam straight back out as I did not want to miss the opportunity of a walk in the sunshine.

I encountered Pete, John and Sarah utilising the leaning posts and out on Purfleet Scrape there were a couple of Curlew and three Redshank amongst the dabbling duck and a cloud of over 200 Dunlin fishballed over the river wall and then back out again. 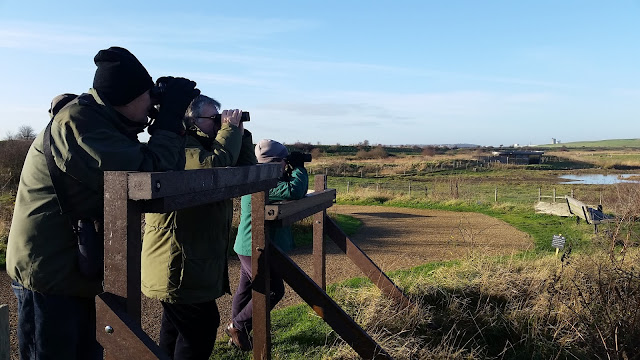 I did actually have a job to do on my circuit – to audit the trail interpretation – and this meant camera and phone were to hand to snap merrily at ripening Ivy berries, fluffy Old Mans Beard and spiky Teasels.


There were now three Chiffchaffs and five Goldcrests in the scrub as well as some Bumbarrels.


Steve and Angela were hard at work on that bit of boardwalk I looked at earlier and another ten feet or so had bitten the dust. While others have been busy cutting our now traditional reed paths for the winter to create more edges and wet areas for Water Rails, Moorhens, Bearded Tits, Cetti’s Warblers and hopefully Bitterns. 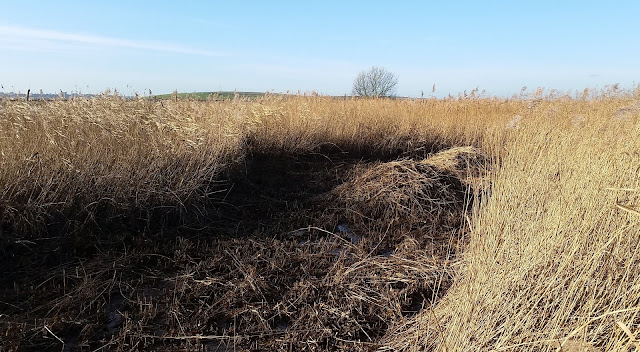 The Barn Owl was loafing in the mouth of its box and both Woodpeckers were heard as I ambled towards the Ken Barrett Hide. No Dartford Warbler today but the Stonechats were right down the bottom and viewing was tricky.

Aveley Pool was quiet but the light was interesting and I played about with some shots through the shimmering phragmites heads looking back at the visitors centre. Always amazes me how different (and effective) the building looks from the north side of the reserve. 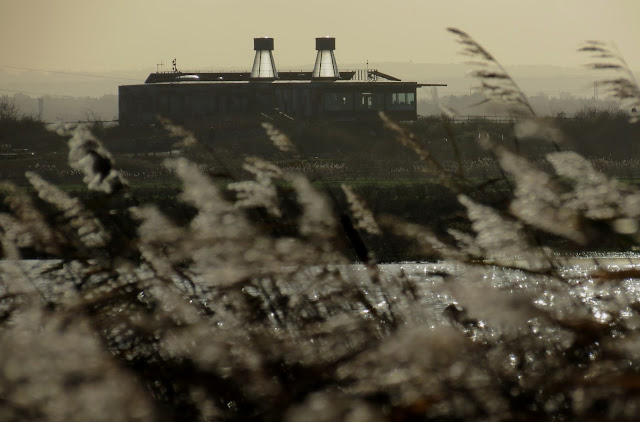 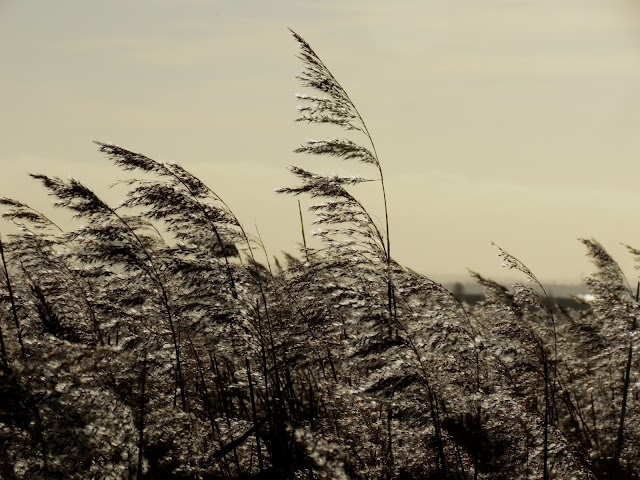 Out on Wennington two female Marsh Harriers played and disturbed the Lapwing flock and I reckoned on about 800 along with over 50 each of Golden Plover and Black-tailed Godwit. As ever the way winter light catches flying Lapwings is one of the most magical of marshland scenes. 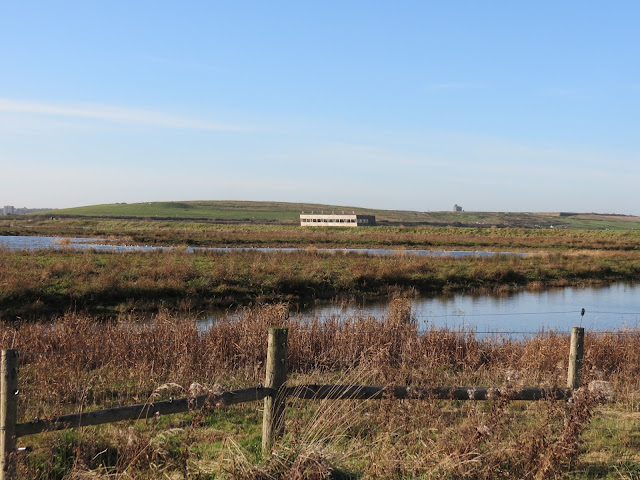 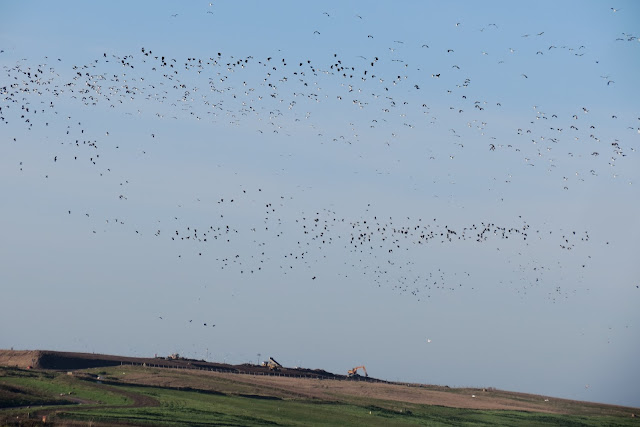 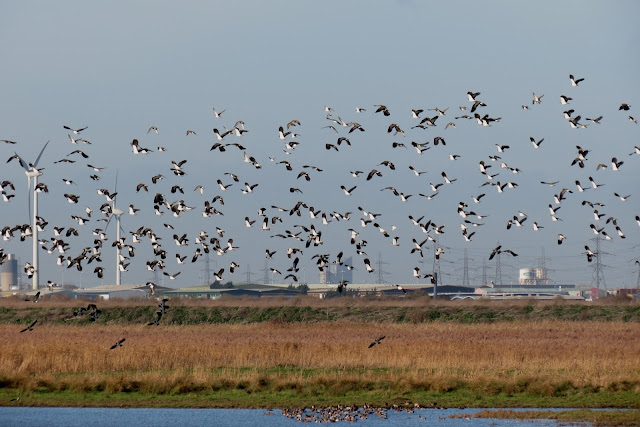 From the Butts Hide a Little Egret fed almost under our noses and out on the Target Pools I found a few Dunlin down amongst the plovers once they had settled back down. Teal, Wigeon and Pintail shone in the sun and 13 Great Black-backed Gulls were having late morning ablutions.
A cloud of Linnets and Goldfinches were harvesting the fallen Dock seed along with at least 30 Skylarks but they too were put to flight by the male Peregrine, Kestrel and Sparrowhawk in quick succession. A Buzzard got pushed through by a couple of Carrion Crows and the Ravens were out on Wennington probably turning cowpats like I saw them doing the other day!

There were no Bearded Tits calling on the Dragonfly Pool so I amused myself with taking pictures of the sculpture reflections instead and out on the Ouzel Fields the low light was showing the Yellow Meadow Ant Hills off to great effect. 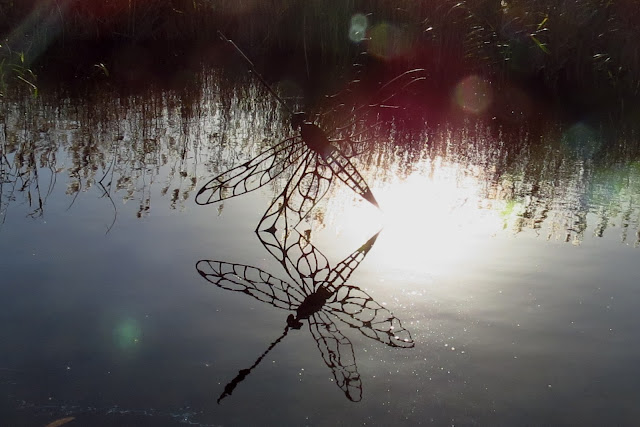 Lunch beckoned and I then managed to spend the rest of the afternoon sitting in one of the comfy chairs, chatting to visitors and right at the end the Short-eared Owl decided to once again pay us a visit and fly around just outside the window in the last glow of a glorious a pink sunset... 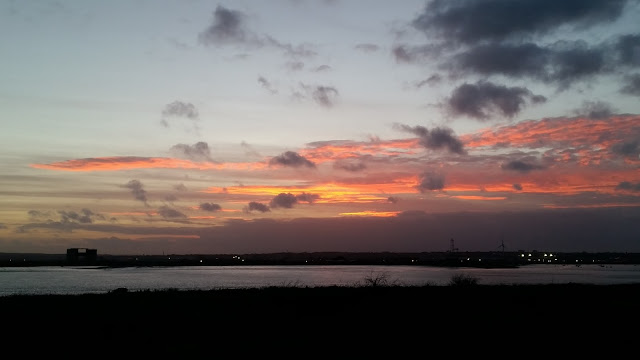 Posted by Howard Vaughan at 14:17 No comments: