It was a glorious morning and I got to the river wall a smidgen after sunrise today to be greeted by the reserve smothered in a layer of mist that covered the marsh up to the Central Control building like a white duvet have thrown back after Sol got out of bed. 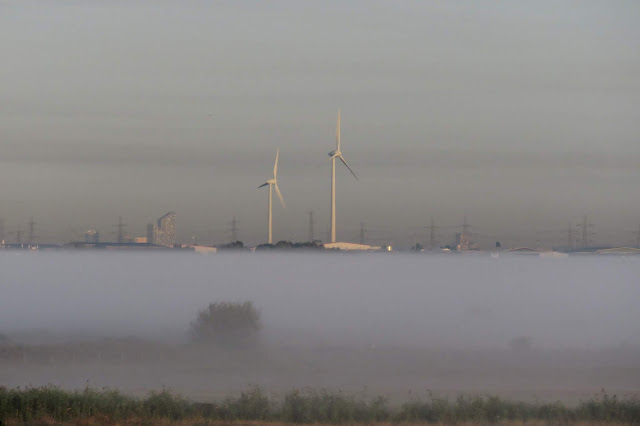 It was quieter than it has been of late but there were still a few Chiffchaffs, Blackcaps and singles of both Whitethroat species along with a calling Goldcrest that always makes any day feel autumnal.

I saw a flock of birds bimble towards me and was surprised to see that they were all Blue Tits but these were not moving from bush to bush like a normal roving flock comprising of several species. Nineteen flew over my head in one flock and gained height before dropping back in about 200 yards further on. They leapfrogged their way all the way to the end of the river wall like this. I am not sure if I have ever witnessed this inland before, but I am in no doubt that they were on the move and not locals.  I saw a Coal Tit from the Centre on Wednesday which is just about annual here at this time of year and I suspect that it was part of this influx. 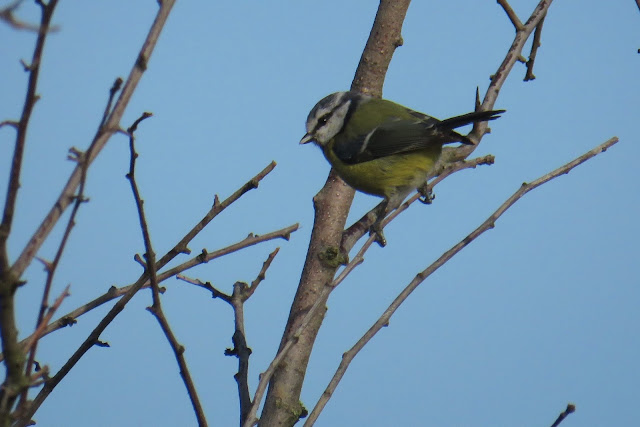 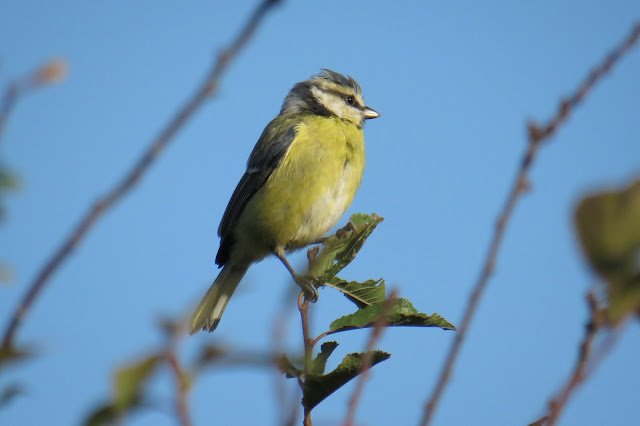 I made my way down to the Serin Mound passing the expected Gulls, Avocets, Black-tailed Godwits and Teal in the Bay.  Grey and Yellow Wagtails headed over and there was a small party of Skylarks up on the landfill. 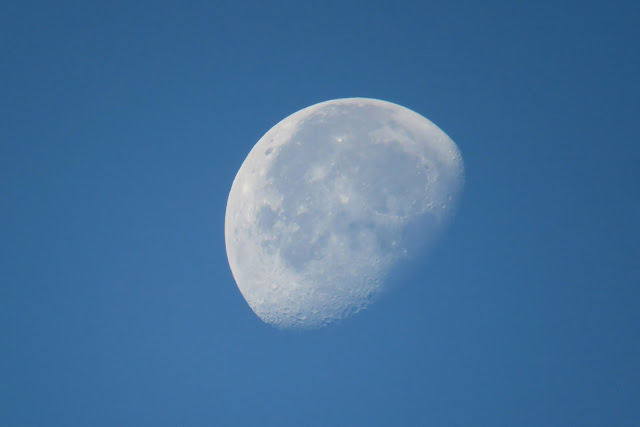 Out on Wennington, Andrew was guiding four huge tipper lorries out onto the marsh where they reversed skilfully down our main track through the middle and deposited tonnes of aggregate ready for the improvements necessary on said track.  There are some particularly sticky patches come winter where trucks and tractors are prone to getting bogged down and all of our ditch crossings are going to be rebuilt over the next few months. 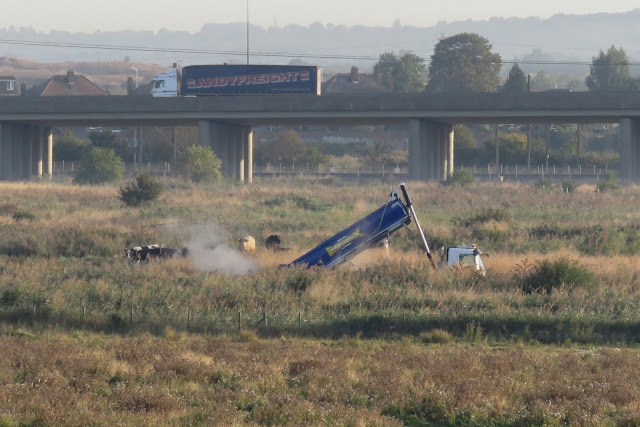 I saw the Cattle Egret briefly but as usual it was in a ditch and keeping out of sight although I did see it flying around again a little later on which was an improvement on the previous day! Two Little Egrets and a Grey Heron were stalking prey on the mirror calm Crake Pool which actually has some good muddy margins and should really have one of the species from which we named it.

I retraced my steps and dropped down through the turnstile gate to be confronted by my customary Grey Heron and inadvertently flushed a party of explosive Teal.

Bearded Tits accompanied my from here onwards on my circuit and I reckon I had 20 all told including two pairs on the Northern Trail that showed ridiculously well as they clambered up to feed on the Phragmites heads. 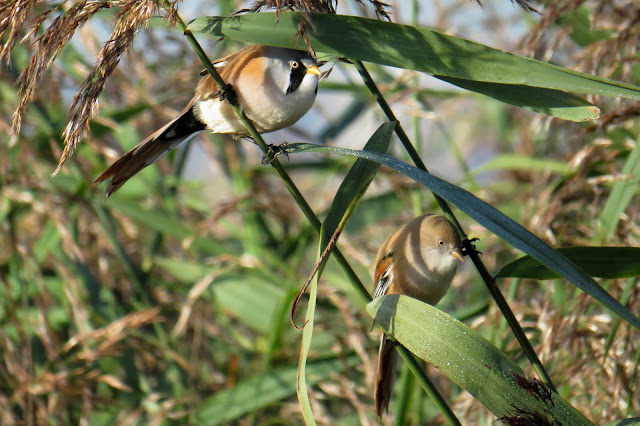 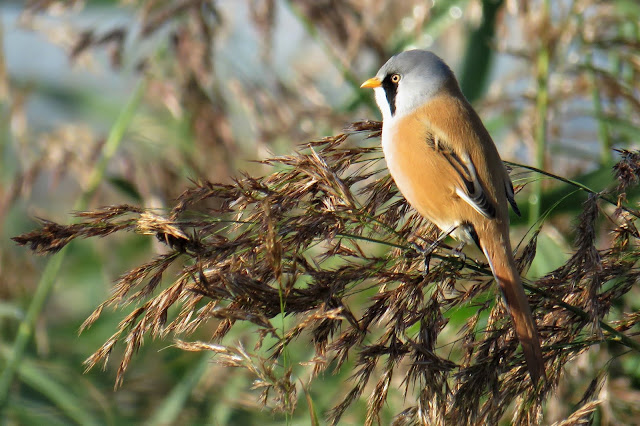 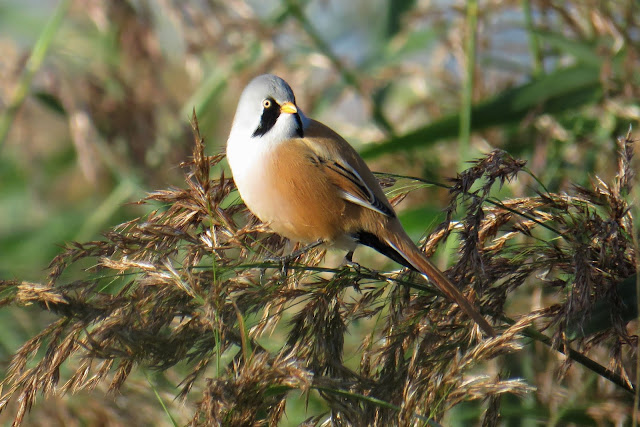 A pair of Stonechat were chacking from the same tops and were my first of the autumn while a few Swallows still lazily drifted south.

Another party of eight Blue Tits flew over my head and paused briefly in a solitary Hawthorn before, like the others, climbing into the sky and heading out over the openness of Wennington. There were further reports of small parties doing his all morning so something was definitely going on. 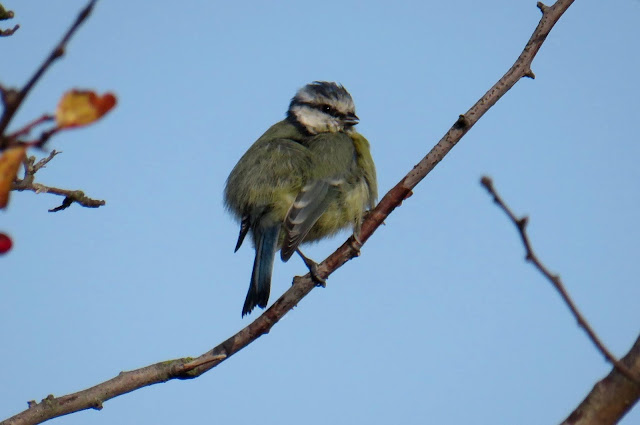 There were plenty of Teal and Gulls on Aveley Pool but the 15 Grey Herons present had the monopoly to fishing rights. 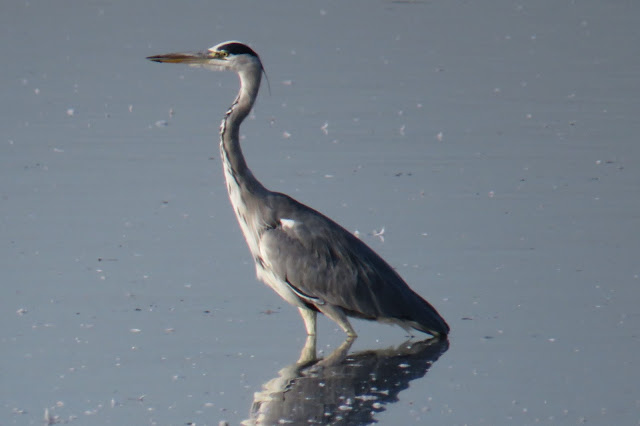 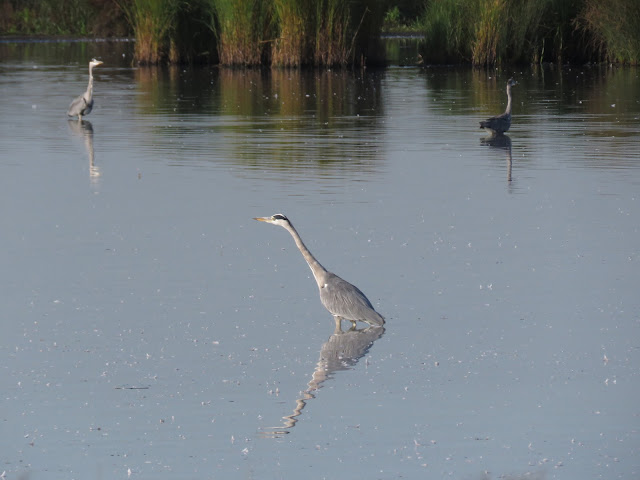 After a quick check on the industrious Ivy Bees it was time to head back in for the rest of the normal working day.
Posted by Howard Vaughan at 19:15 No comments:


A day off, some sunshine and me with a little bit of get up and go to get out and do something made a pleasant change and although I did not go to Oare as planned I still managed to head off into the local woods and explore part of the Ranscombe Farm Plant Life Reserve that is quite literally reached from the top of my road.


In 17 years I think I have only been through the M2 underpass to the other side a handful of times. In those early years there were still Hawfinch, Willow and Marsh Tits here and if I had headed up in the summer even the chance of a Nightjar but I never made the effort and those days are gone for all four species now. I suspect I was slightly scarred by the traumatic two hours spent calling for my dog, Jinx who had unusually hared off into the maze of Chestnut coppice after some invisible scent one snowy winter’s day before reappearing gratefully at my feet. 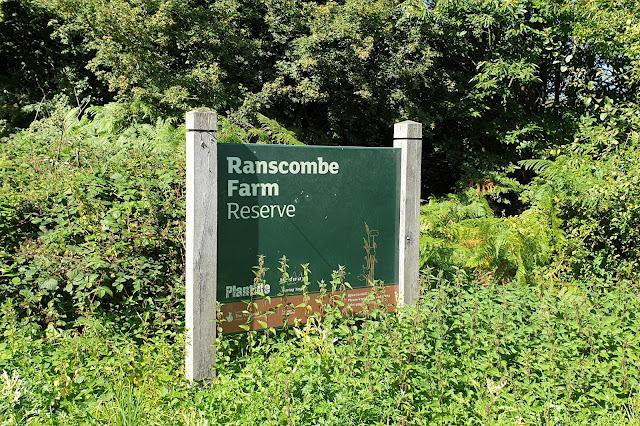 And so through the tunnel I went, looking at the once lovely graffiti mural of butterflies, shieldbugs, moths and birds that is itself now covered with a myriad of indecipherable tags from the local scrotes who would not appreciate art and wildlife unless it was rolled up in cigarette paper.

A narrow band of wood and then the bridge over the CTRL with a Eurostar thundering towards Ashford under my feet before following my nose up through the coppice with the more stately Sweet Chestnuts and Hornbeams guiding me from the path sides.  I have always appreciated a good tree and some of those that I encountered were towering veterans of many centuries gone by. I nodded my respects and veered off the path to lay hands on the twisting majesty of the most noble of these; the twisting spirals of the Chestnut with twenty foot of girth and in my head I felt the thrum of life surging up through it.  I would pat it and wish it well and amble on to the next.

Single leaves hung and spun on silken threads and seem to have been placed by spiders in just the right spot to catch both the breeze and sunshine like some giant natural mobile designed to stop all the leaves reaching the ground and forestalling autumn to become winter. 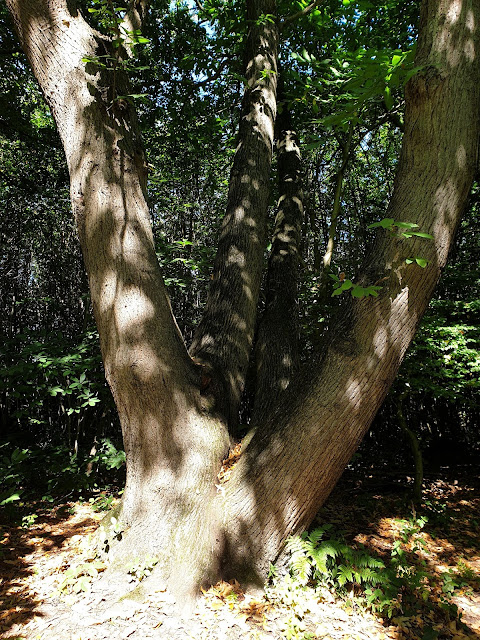 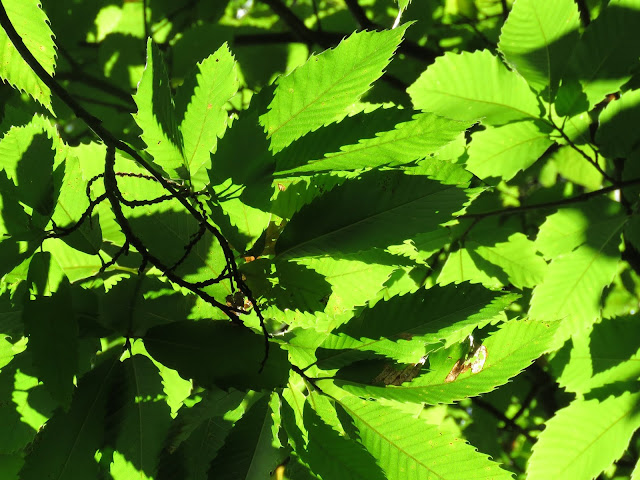 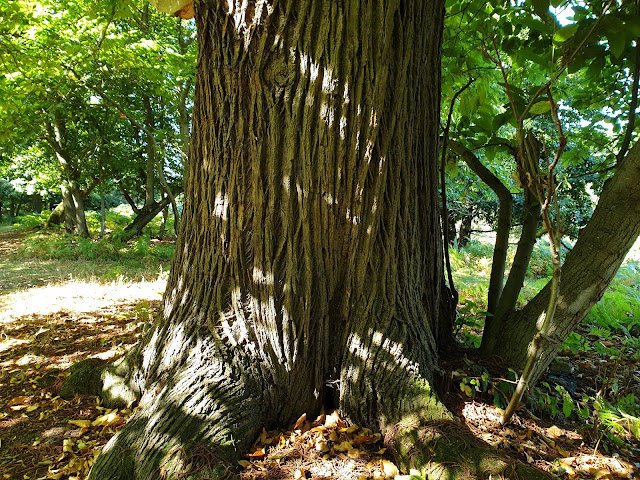 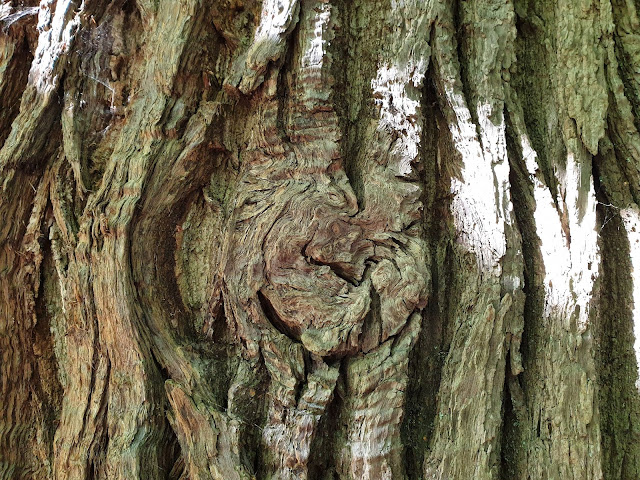 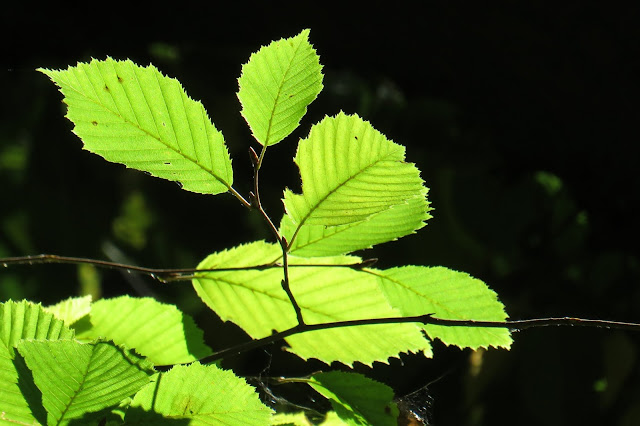 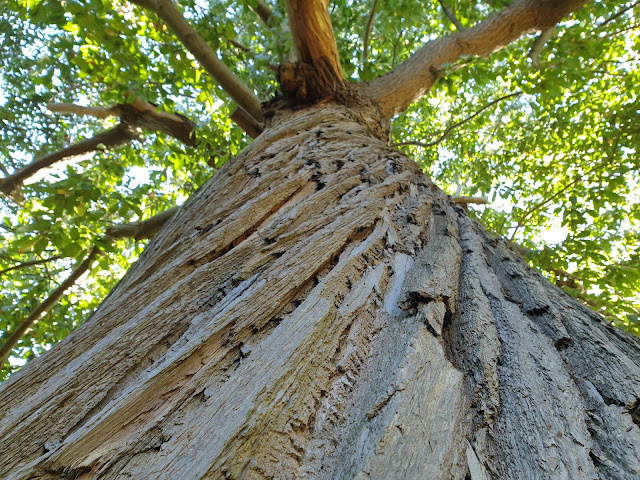 Both species seem to be almost indestructible with many fallen trees now creating a mini copse of their own with shoots springing from their prostrate trunks now trees in their own rights. However, the towering skeletal stag heads of those that have succumbed to old age still cut a fine shape against the blue sky. 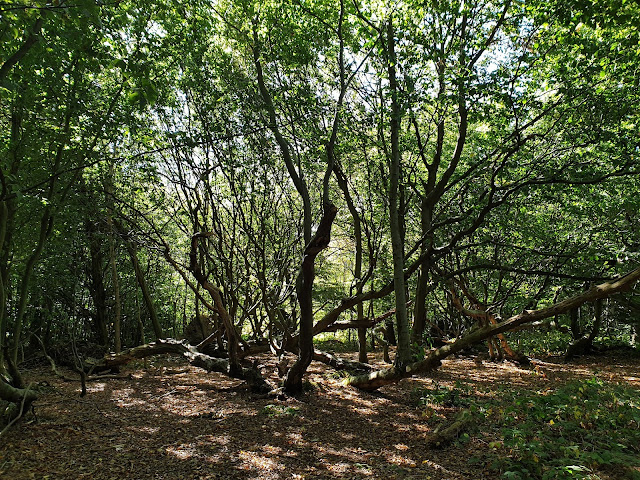 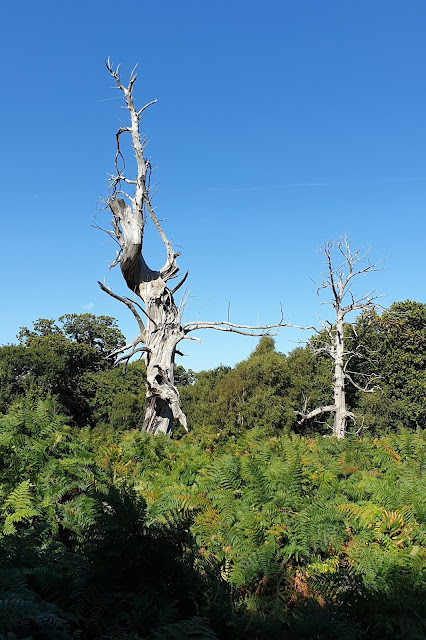 The crop of fruit of both was immense with bunches of Hornbeam seeds and prickly Chestnut cases weighing down the branches and there will be a bumper harvest for finches, Squirrels and Deer. 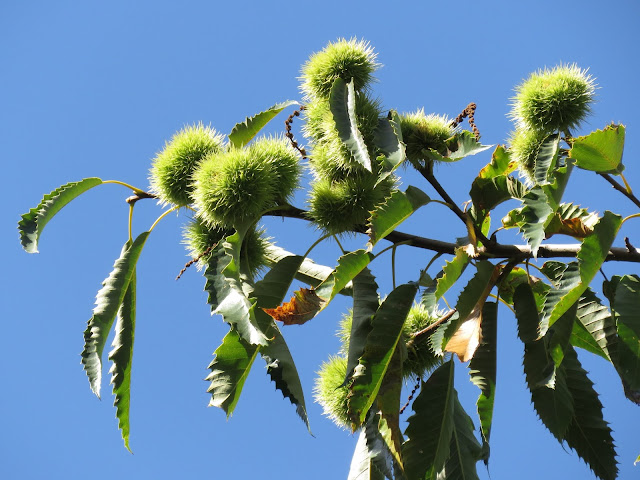 The woods themselves were disturbingly devoid of bird life. I only found one tit flock with Blue, Great and Long-tails but then only about ten birds; I heard three Goldcrests and a distant Nuthatch. It should have been alive with sound. 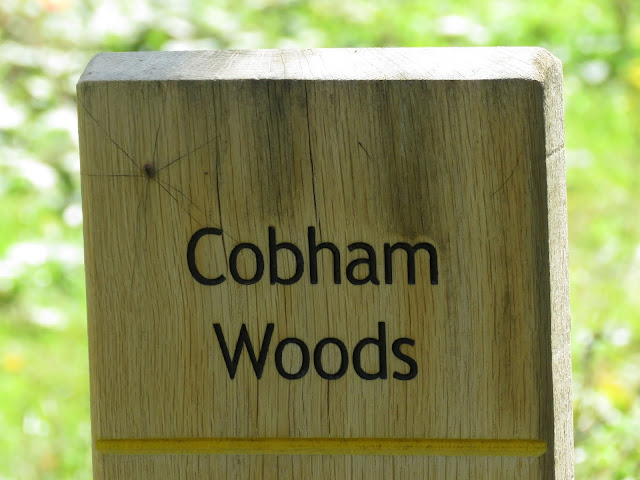 Insects on the other hand proliferated with Common Darters and Migrant Hawkers in amazing numbers hunting in the sunny glades and rides while Comma, Speckled Wood, Red Admiral, Small White and even a pristine male Brimstone adding some butterfly colour.

Orb Weavers had webs strung over suitable gaps with the hope of catching one of the lazy Blue Bottles and Flesh Flies that were bumbling around and Field Grasshoppers and Dark Bush Crickets serenaded from the margins.  I even found Myathropa florea and Eristalis tenax looking for rot holes in a Hornbeam which was good to see.  Water must be at a premium as the lack of any notable rain persists. 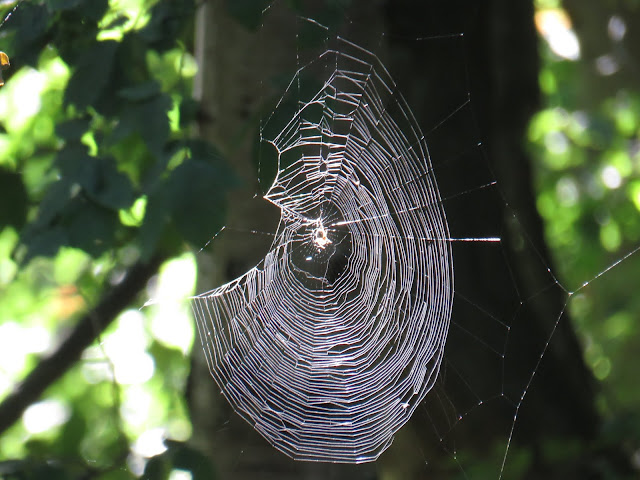 I crossed into the Cobham Estate and soon found myself in front of the imposing edifice of the mausoleum of the Darnley family.  It sits on the brow of the hill and would have once had a commanding view over their estate. 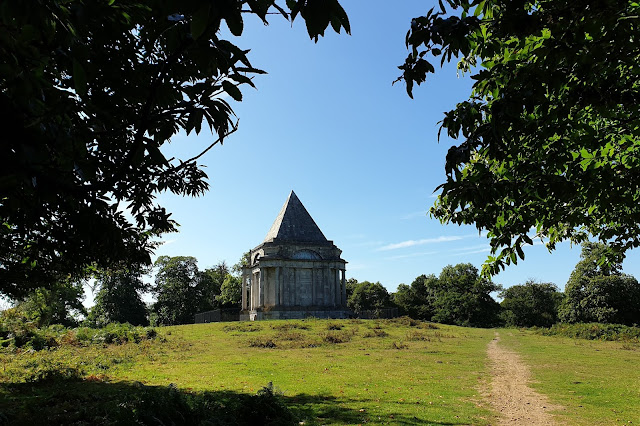 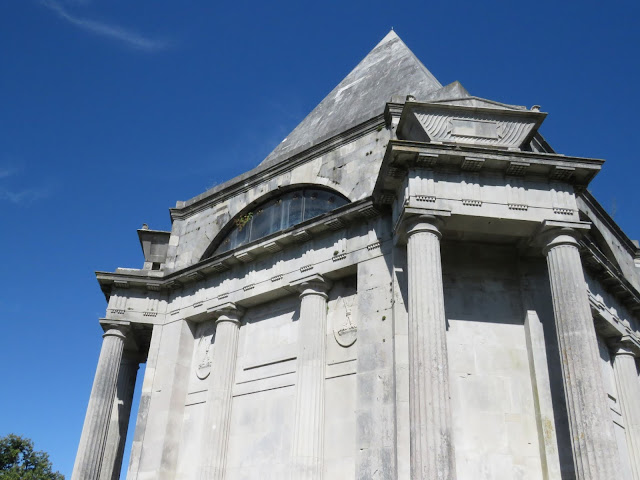 I circled it before retracing my steps back towards the main woodland but became distracted, as one does, by lots of insect activity around some slightly crusty cowpats.


And here I spent a content and not too odiferous half hour trying to get pictures of several elongated female Soldierflies that kept coming in to lay eggs down the side where the pat met the ground.  They were nicely shiny green and had a reddish patch on the skinny abdomen which has helped identify them as Twin Spot Centurions  - Sargus bipunctatus.  I caught a male at RSPB Rainham Marshes the other day so it was nice to have an idea where to go with it!


Several Lucilia and Sarcs were attending the pat and I found two Neomyia waiting in the wings which allowed some shots and the confirmation of N cornicina with one pair of presutural acrostichals and three pairs of postsutural dorsocentral bristles.  Who would have thought I would even look a few years ago? A strange hoverfly was also floating around and I eventually got a good look at them.  I had the name cuprea in my head in that weird way that my brain stores information and my Ball and Morris added Ferdinandea cuprea to my hoverfly list when I got home.

A big fat Mesembrina meridiana came to join in the fun and huge Hornet made a passing effort at a snack about a foot in front of my face.


My loop took me off to the east through younger coppice and the warm gravelly path side was host to more crickets, a large Robber Fly species and Eupeodes luniger and what I believe to be Cheilosia scutellata (with the big nose) both on some remaining Wild Carrot that was flowering. Young Lizards darted away from me and the sandy banks were full of bee holes from earlier months.  More Speckled Woods danced and a Meadow brown was a late surprise.

I startled a big dark Fallow Deer that crashed off into the wood and quite literally knocked over a wood pile in the process before stopping for a glance back at the alien on its patch before I emerged to a huge field that ran down towards the Cuxton Road entrance to the site and a fine view across the Medway Valley towards Borstal and Wouldham. A large flock of Wood and Feral Pigeons were feeding in the harvested field but there were no small birds of any sort once again. 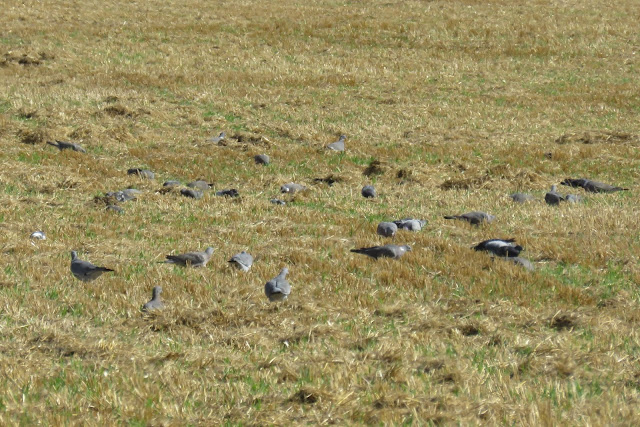 There were even more Hawkers and Darters on this stretch and flocks of the former were marauding from ground level to 30 feet up as I veered back around to the west on what I hoped was my circular route back to the bridge, tunnel and my car.

My internal sat nav has always been pretty good but it is always pleasing to end up where you hope to after a walk into the unknown.
Posted by Howard Vaughan at 19:39 No comments: