Day 6: 28th April :
It was a beautiful still calm morning and so we headed down to the northeast Kalloni Saltpan hide for a little after 0630. The mirror reflections from the hills behind were simply stunning and created some odd illusions with the flying Stilts. Ten Curlew Sandpipers were with 38 Ruff but there was no sign of the four Caspian Terns seen yesterday evening. Breakfast was taken with singing Hoopoe and Fan-tailed Warbler in the background before we packed up and headed west once more, this time on the coast road. 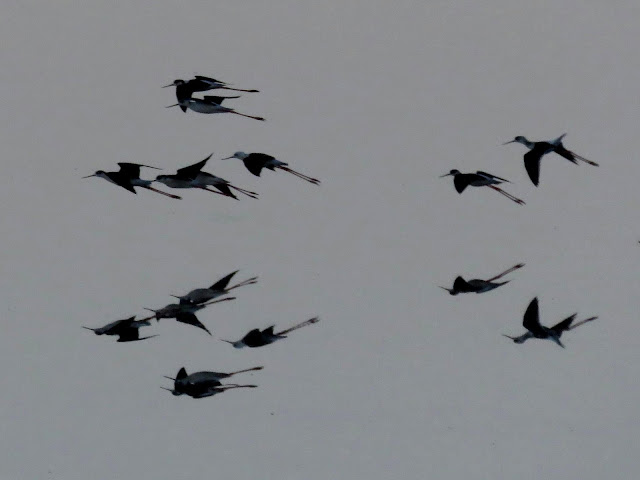 We did not linger about and we were soon in Eresos and on the start of the dirt track through to Sigri. The track was lined with so many butterflies with clouds of them coming up from the abundant Black Mustard flowering alongside the path. I had ever seen anything like it. Mostly one of the Meadows Browns along with skippers, Marbled Whites, Small Coppers and fritillaries. There were plenty of Cretzschmar’s and Crested Larks singing and Rock Nuthatches, Stonechats, Whinchats and Red-backed Shrikes started to appear.


Down in Meladia we spent some time checking the Fig Grove and Chapel area and took the Red-backed Shrike tally to 22 along with three smart pink flushed Lesser Grey Shrikes all together on one fence, both Pied and cracking Collared Flycatchers, lime green, white and lemon Wood Warblers, four luminous Orioles, acrobatic Spot Flys and even a Little Bittern and two Squaccos.

A mixed hirundine flock shared the Chapel pines with us at lunchtime and dreaded when three Short-toed Eagles drifted over. Lesser kestrels and two Eleonora’s Falcons were seen before the Sanatorium and the views along the coast with green rolling fields and cobalt seas was simply stunning.


Ice-cream in Sigri and then and hot walk in the late afternoon down through Faneromeni down to the Upper Ford where the Purple Heron was still in residence. We notched up another 12 Red-backed Shrikes, four more Orioles and our first Willow Warbler and Blackcap of the week before spending some quality time with over 120 Bee-eaters. White watching these beauties I turned round to see a wader coming over the hedge... 'Great Snipe!!!' I shouted as it whizzed into the olive groves... not sure the Steve will get much of description out of me on this one but still a wow moment...


We soon headed off and made a brief stop at Ipsilou where Cinereous Buntings and Isabelline Wheatear obliged and a tiny Ottoman viper that was sunning on the path almost ended up in my sandal causing me to perform the first comical snake dance of the holiday.


Another 11 Red-backed Shrikes enlivened the smooth journey home taking us to at least 51 for the day... I wonder how many are on the island today?
Posted by Howard Vaughan at 12:41 2 comments:

We went west this morning and slowly wended our way through the bird song filled countryside towards Sigri via Limonos, Skalachlori and Andissa pausing to listen to Nightingales, purring Turtle Doves, trilling Eastern Bonelli's Warblers and buntings and wheatears galore on the way. Cobalt Blue Rock Thrushes and stripy triangular Rock Sparrows were seen at the pinnacle layby in Lardia and Black-eared wheatears chased off the Stonechats.


It was cold at the Isabelline Wheatear layby and most birds were silent although a pair of Masked Shrikes moved through, a Woodchat sang and down below us in the valley several Golden Orioles were putting in some effort and were responsive to my whistling but did not show. A Fox moved through the meadows and one Issy was eventually found. 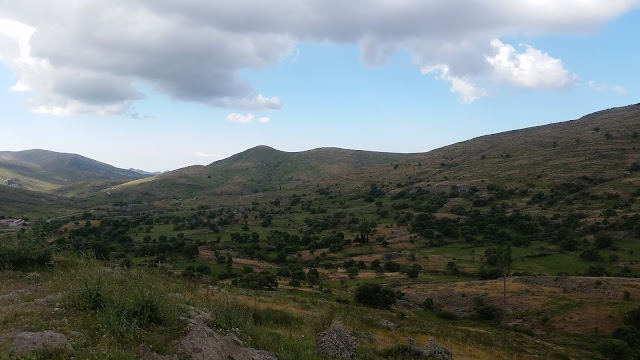 Some helpful advice sent us back up the road and most of the day was then spent exploring the tracks around Mount Ordimnos. It was magical with three Wheatear and four Bunting species putting on a fine show with the Isabelline Wheatears being especially entertaining in full Star Wars effects mode.


Hundreds of Black-veined Whites danced low to the ground when the sun broke through while Festoon and Fritillaries were on the camomile lawn around the tiny newly rebuilt monastery at the end of the track where more Bonelli's Warblers sang and Sombre Tits and red bra wearing Linnets came down to bathe. Woodlarks circled above and Crag Martins cruised around the buildings and one almost became Peregrine food after an epic wind splitting dive that made so much noise that we all jumped. 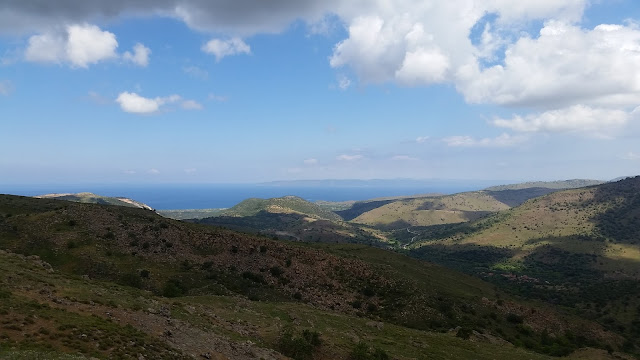 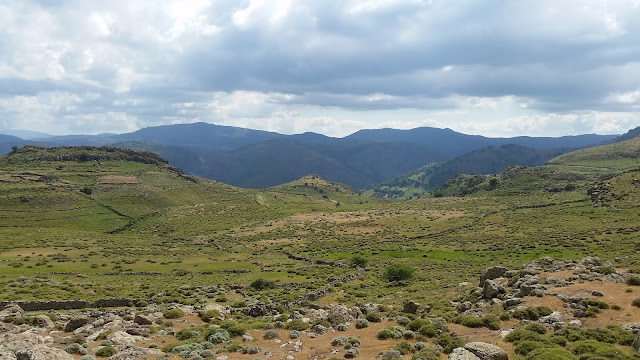 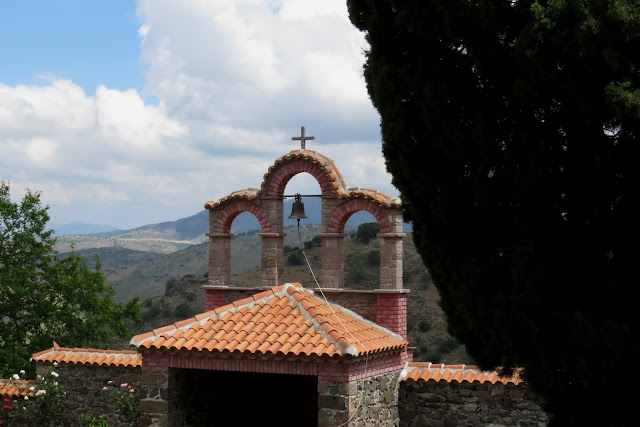 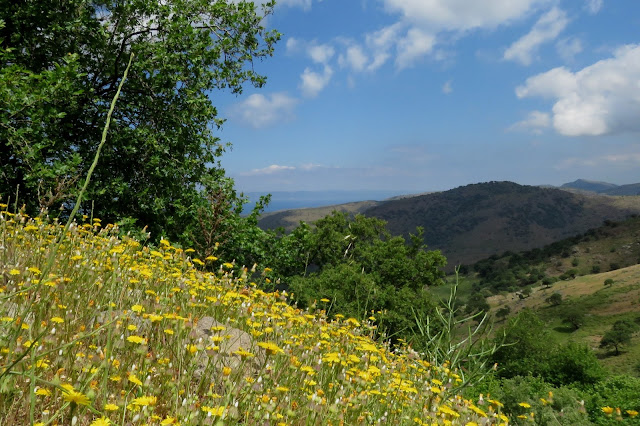 A clear pool near the hidden incinerator plant held lots of Red-veined Darters, Broad-bodies Chasers and the cleanest looking Stripe-necked Terrapins and Balkan Green Frogs I have ever seen!

There was more bunting action to be had at the Petrified Forest along with a surprise male Ruppell’s Warbler on territory and carrying food, a showy Orphean and a male Red Backed Shrike before we headed at long last down into Sigri and Faneromeni for the evening. 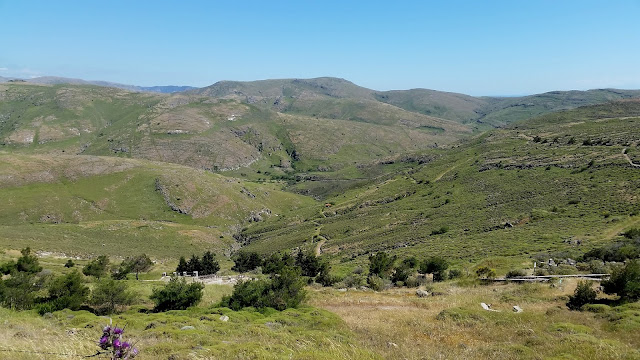 Spotted Flycatchers and Turtle Doves were the dominant species along with two female Collared Flycatcher and a Wood Warbler. Golden Orioles and Bee-eaters added colour.

A magic ten minutes at the upper ford added Purple Heron, two Little bitterns and a cracking female Citrine Wagtail to the list while Cirl Buntings bathed and the Cattle Egret found earlier decided to fly over.


Some more wondrous Golden Orioles and thousands of offshore Yelkouan Shearwaters rounded up another memorable day.