An ornithologically related lunchtime meeting in the Lee Valley  had given me a day off and so I headed north of the river quite early with a view to some quality insect time before the temperatures climbed too high.


Phil had told me last week of a report of two Tachina grossa (the black, spiky, bumblebee sized fly with a golden Elizabethan ruff) from Havering Country Park and I was intrigued to go for a look at a site I had never visited and yet can see up on the ridge beyond Collier Row every day from the centre window at work.

Traffic required a little wiggling but I got there by 7.30 and wandered into the grassy area at the southern end that I had spied via Google Maps. Nectar sources are now thin on the ground so I knew that I needed to find a sunlit patch of flowers. 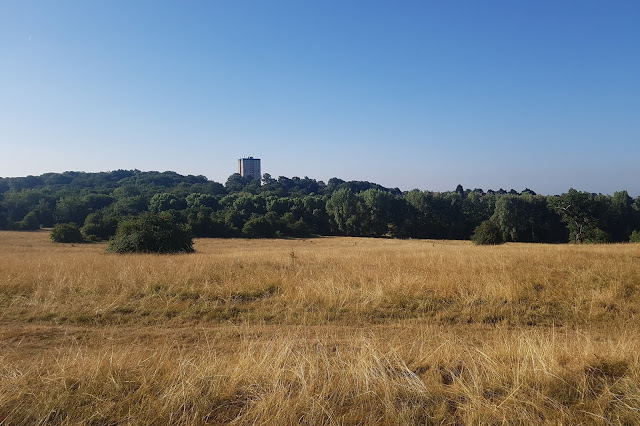 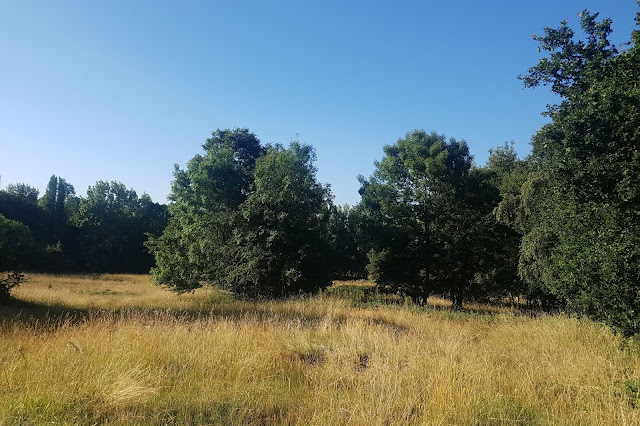 My clockwise circuit quickly suggested that it was already uncomfortably hot and that there was only the odd Bramble bloom and Ragwort spike to look at. That said butterflies were already active with Meadow Browns, Gatekeepers and Ringlets flicking around along with Common Blues, Small Copper, three Whites and a delightful number of Purple Hairstreaks that were coming down to look for moisture on the Bramble leaves which given that the grass was slightly damp may have paid dividends.


Meadow Grasshoppers were already noisy and I spooked one into the web of my first Wasp Spider this season.  They have been a bit thin on the ground at Rainham so far this year.

Family parties of Swifts screamed in the blue and it was encouraging to hear House Martins too in a year when they have been scarce too. Tit flocks roved and I can imagine flycatchers and warblers caught up with them over the coming weeks. The views were superb off towards London with the whole vista spread out and not condensed like I see from the reserve. 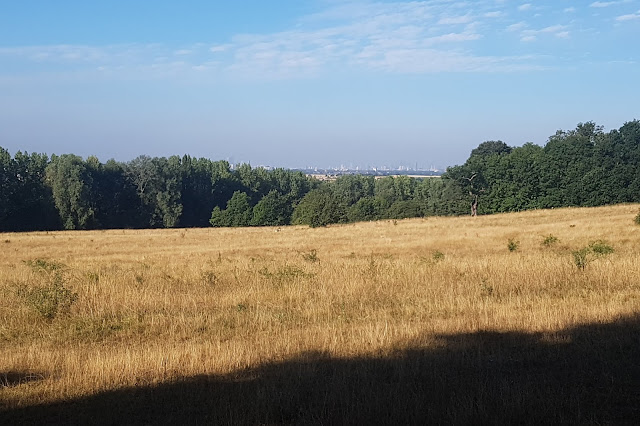 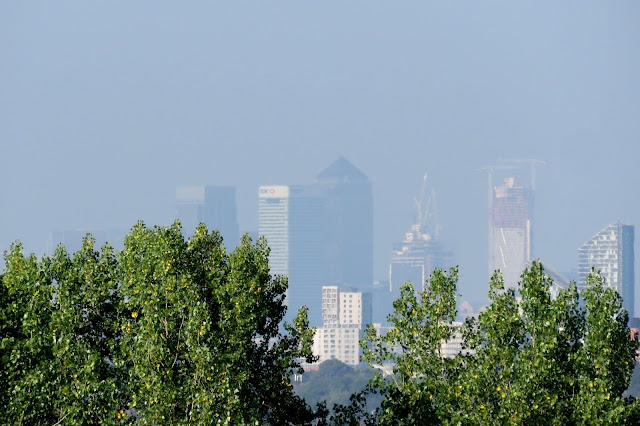 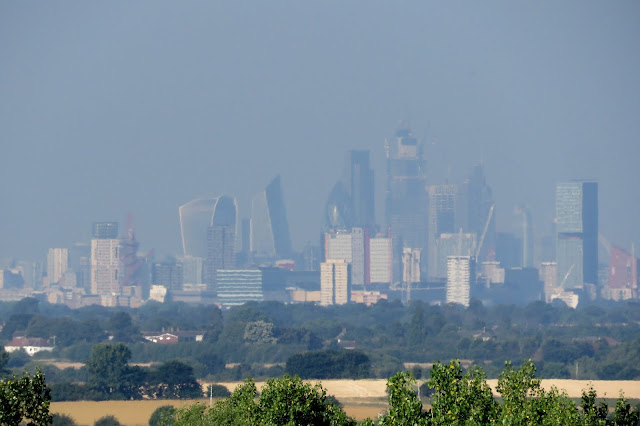 Migrant Hawkers hunted the woodland edges but I was still flowerless until I spied a big patch of lilac Creeping Thistles at the bottom of the cattle paddock. I cut across the meadow and found myself faced with the most amazing insect concentration I have seen in a long time.


The next couple of hours were magic albeit in rocketing temperatures that had me retreating every now and then to the shade of a poplar before continuing my education.

There were many more flies than bees and I was having my work cut out switching between Hoverfly and Tachinid id only to realise that there were more Conopids present than I have even seen before!

And a Linnaemya having a nice wash and brush up....  click here...


I never did see Tachina grossa but was impressed with finding species that I had a chance of identifying and the Nowickia ferox was an imposing beast of a fly and only my second sighting after one at RSPB Dungeness a few years back. I am sure if I  have made a mistake the knowledgable Mr Collins will assist...

And so to the Conopids:


I did not do too badly with my identification and finding four different species in numbers, on one thistle patch was very pleasing and educating.


The previously mentioned butterflies were scattered over the flowers with Southern and Migrant Hawkers hunting around and above them, Ruddy Darters zipping in and out of the hedge and a few very tenacious Hornets throwing themselves at anything that paused long enough to pounce on.

There were also masses of Honey Bees, Andrena flavipes, several tiny bee species,  what looked like Cerceris rybyensis - the Ornate Tailed Digger Wasp that we get at Rainham, the thistle galls of Urophora cardui, Soldier Beetles and a few Sarcs, Lucilia and Muscids.


It was a little after 10am and simply too hot to be standing around and so I wended my way back to my car that was thankfully parked in the shade, passing what is quite possibly the best sign I have ever seen up in a public place...