I discovered yesterday that I have a top spot for Broad-leaved Helleborines even closer to home than The Larches but as it was the dreaded Shorne country park with its surfeit of peoples engaging in various perfectly legal activities that may otherwise aggrivate me and disturb my walk time, I decided to get there relatively early and was ambling the trails by just after 8am.

I did not quite have the place to myself but near enough that they only sound was a little bird song and the roar of the A2.  It took me a little while to find them simply because most of the plants are far smaller than those at The Larches but unlike there, most were open and in fact some were even going over. 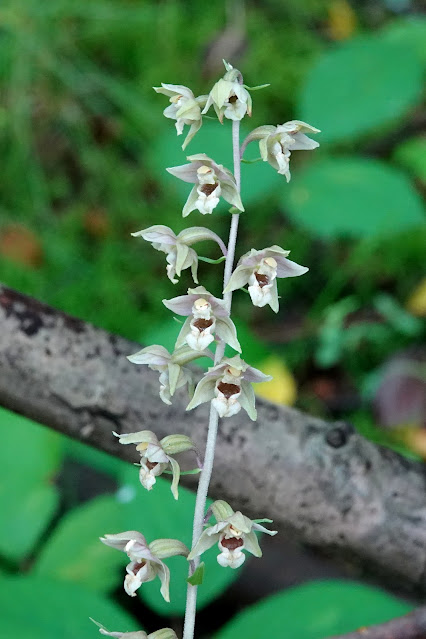 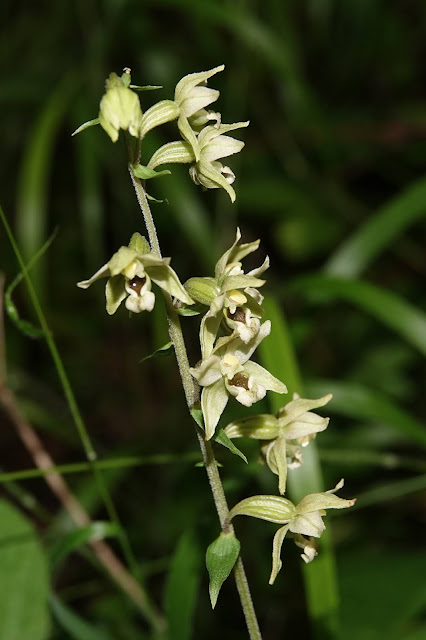 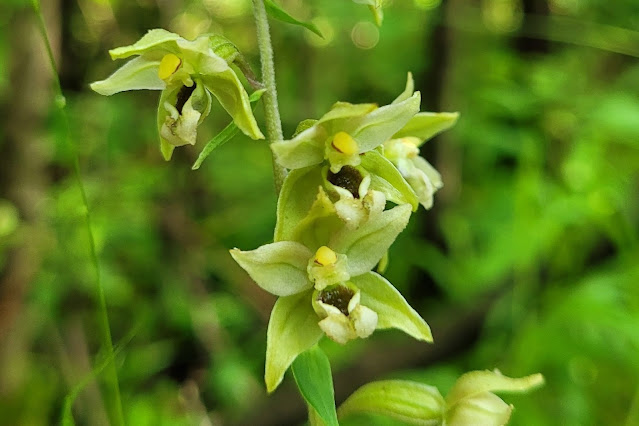 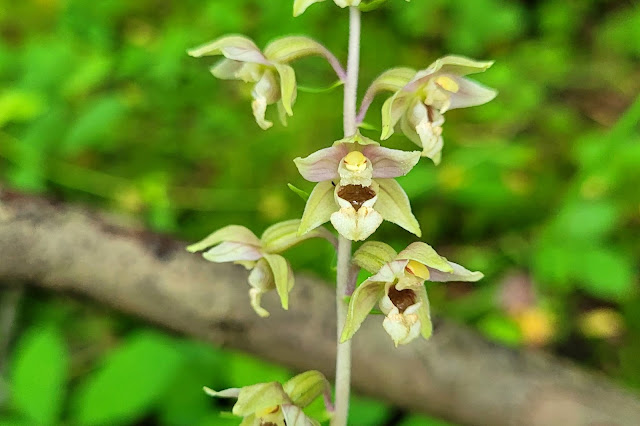 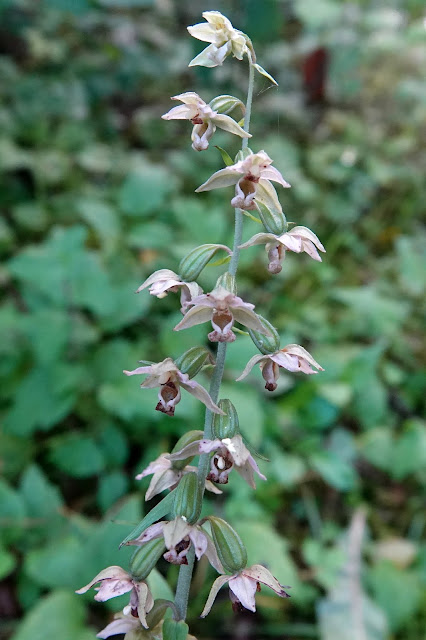 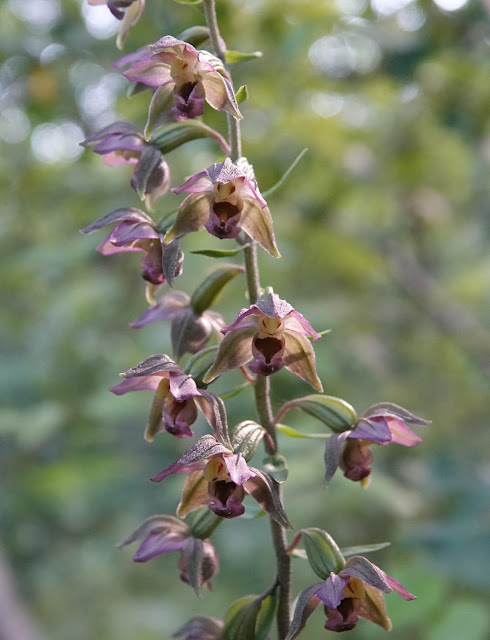 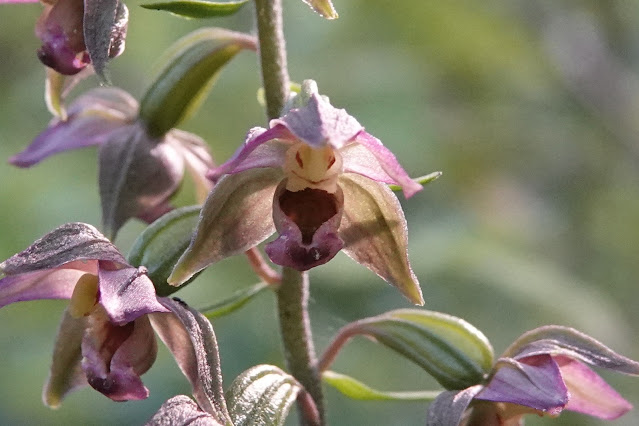 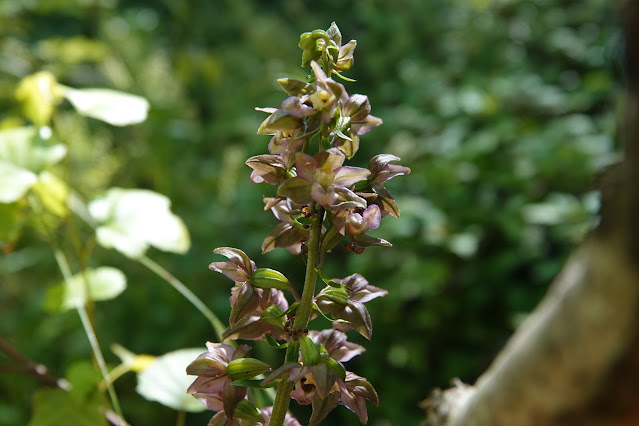 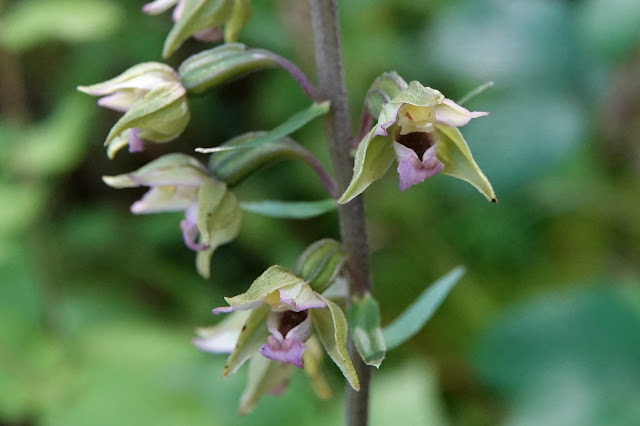 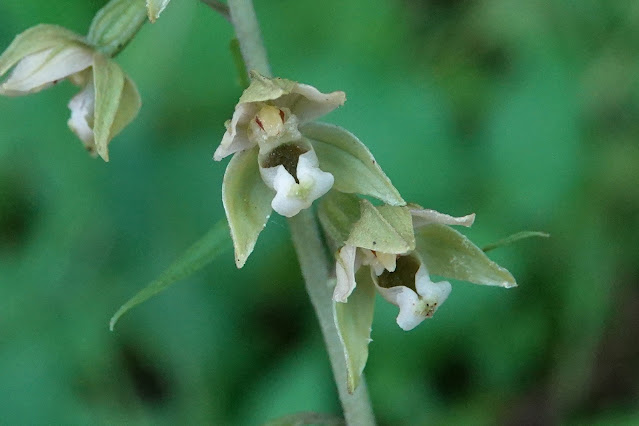 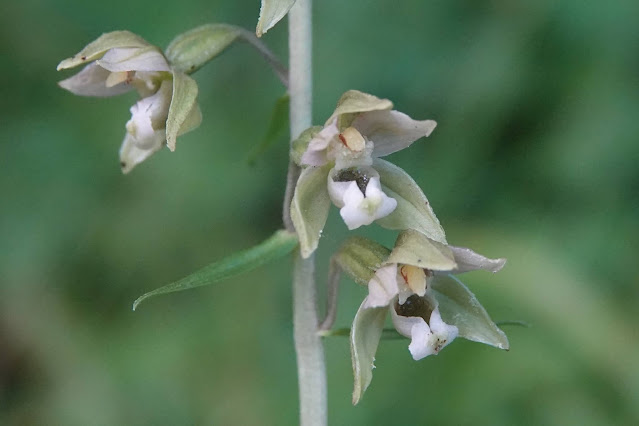 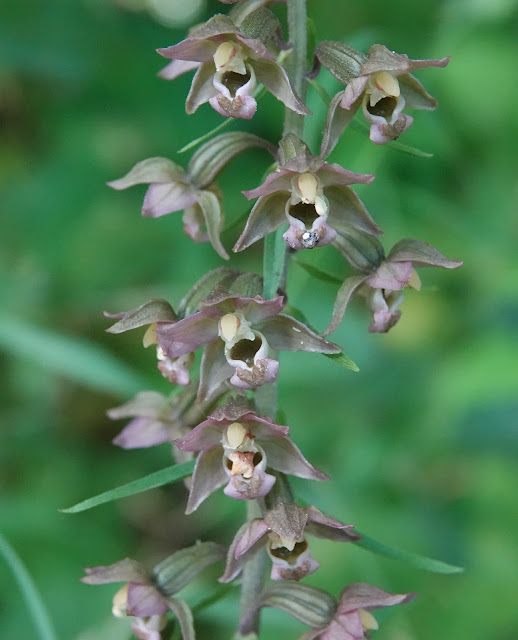 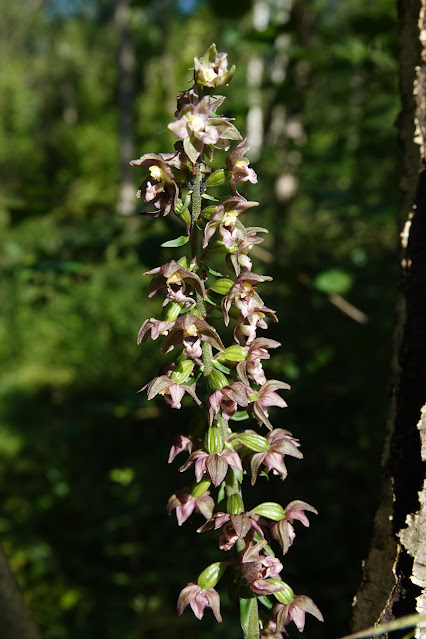 They came in the usual wide array of pinky greens with hints of lilac and I found at least one wholly green one and two towering burgundy and pink ones that were the darkest I have ever seen.

I also found two stray Helleborines way off the path under the Beech trees and wondered if they could be Violet But I will have to return and have a look again once the flowers open.

It was very strange weatherwise with sunny spells blowing through but it was not overly warm under the trees and I saw little in the way of insect life with just a few Ruddy Darters and a single teneral Small Red-eyed Damselfly.  With my mission complete I hastily vacated the park weaving through the incoming noisy throng of other ‘public amenity space users’.

A quick pop back home and then out again to Queendown Warren as I still needed a Chalkhill Blue fix for the summer.  It was quite gusty but at least the sun was shining and I had a very successful circuit and by the end the meadow was flickering with lightening blue Chalkhills and large numbers of Meadow Browns and Gatekeepers. 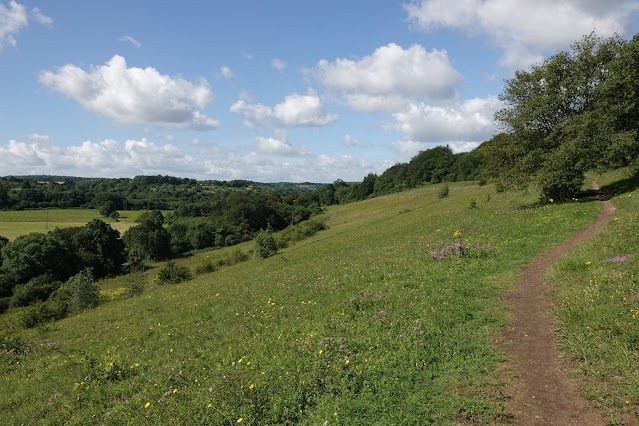 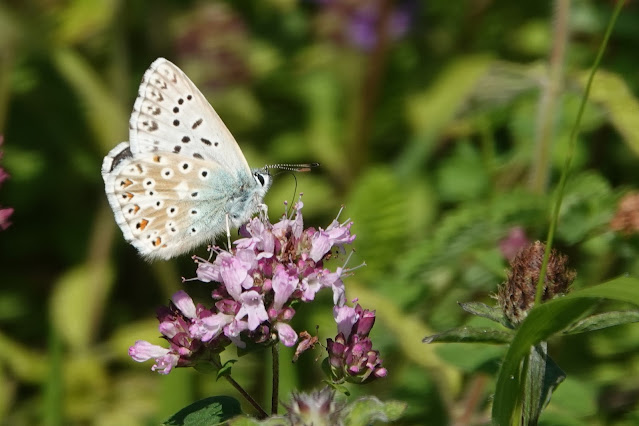 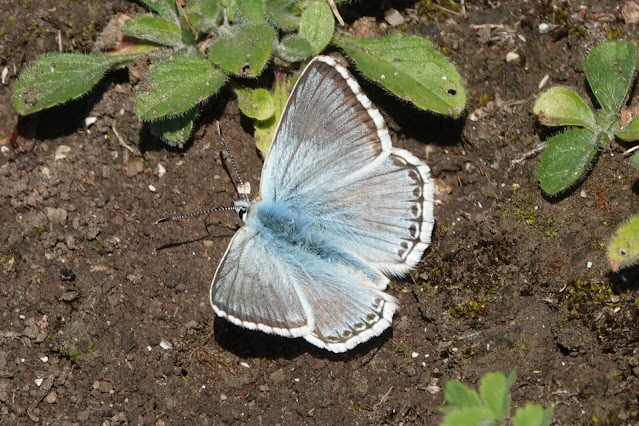 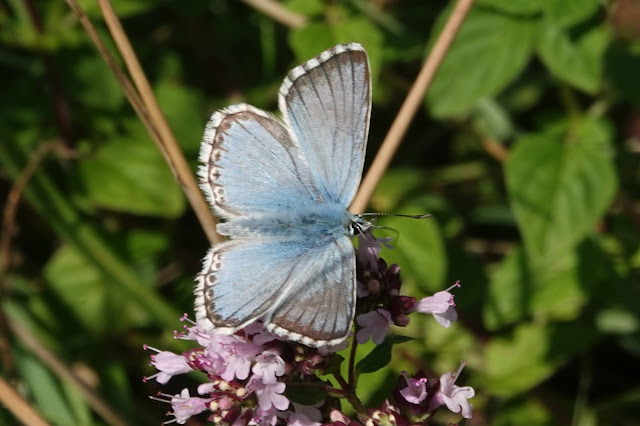 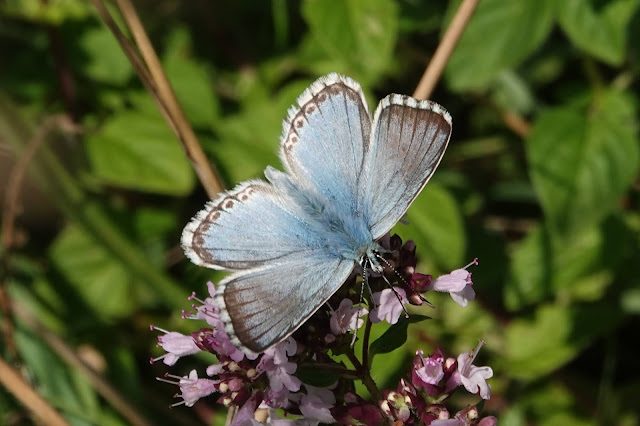 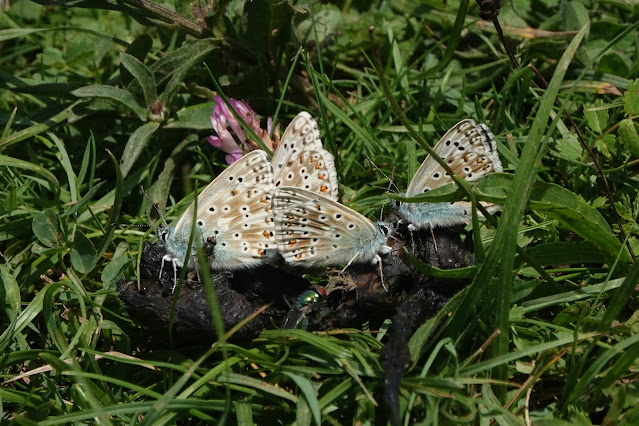 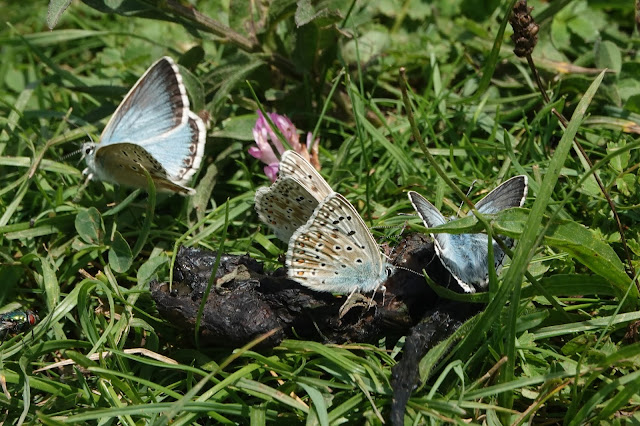 I managed some nice wings open moments and had a congregation of males around a nice ripe bit of fox poo.  I saw no Adonis but there were several Common Blues and Brown Argus and the last of the Marbled Whites were flouncing across the sea of pink Marjoram, Basil, Thyme, Scabious and Knapweed.  Comma, Painted Lady and several fresh Red Admirals were seen too but there were no Skippers seen of any sort whatsoever.


Pyrausta aurata and purpuralis were seen along with several Silver-Y, Onocera semirubella and a tiny little Endothenia gentianeana/marginana agg.  Migrant Hawkers patrolled the edges and Ruddy Darters were out in the meadows hunting from high points.

There were lots of Hoverflies with Eristalis of five species being the commonest followed by Episyrphus and Sphaerophoria.  There were some very fresh Myathropa flora and three Volucella for the list.

Grasshoppers were everywhere and Meadow was once again the commonest but I did find Field and got good views of Rufous once again.  I was hoping to find Stripe-winged like last year and eventually found a couple on the lower path.  Such a distinctive and chunky Grasshopper.


There were quite a few Bumbles and heaps of Honeys and several of one of the large Megachile Leafcutters species were on the Thistles.  I must work out how to id these. 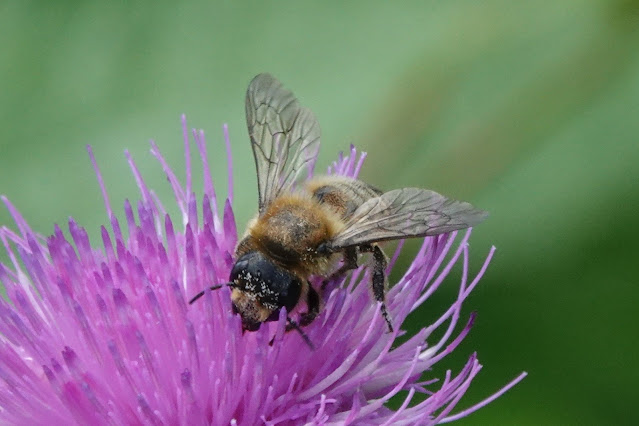 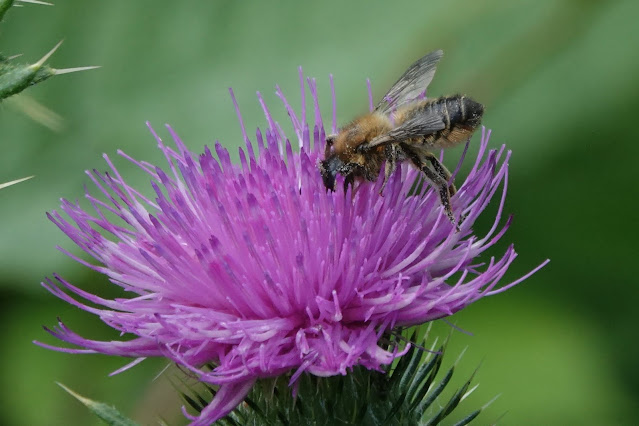 Bullfinches and Green woodpeckers followed me around but as usual were invisible for the most part and when I got back to the car I found a single Broad-leaved Helleborine just coming into flower in the verge – typical – not seen one here before!

I headed for home passing a huge wash of Nettle-leaved Bellflower in the wood to the north of the road and then pottered around the garden for a bit quality Hoverating.


There were Slugs and Snails everywhere in various shades and shapes and a new hairy beetle was subsequently identified as Lagria hirta.

The Large Headed Resin Bees and a small Leafcutter that I think is Megachile centuncularis are both in the bee hotel but not much seems to have taken to the new apartments yet while my first male Bombus lucorum of the year were on the Veronica and Greek Marjoram. 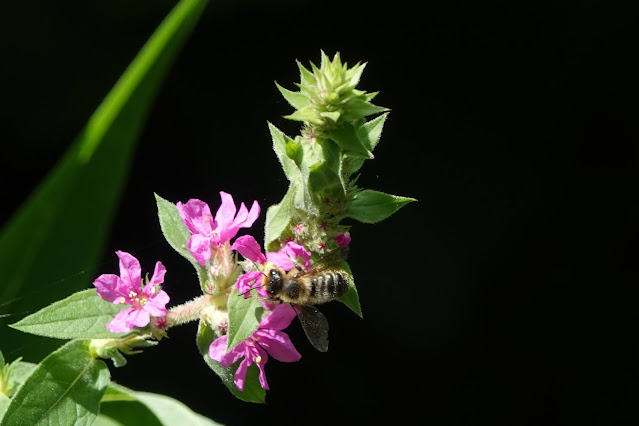 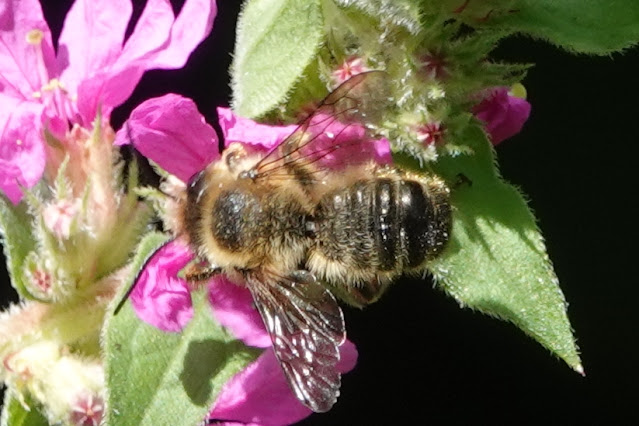 It was good to see an adult Common Frog in the pond but it will definitely need clearing out in the autumn as it has got a bit leaf clogged and I found several froglets hopping around too which are the first garden ones in several years.  Holly Blue and Speckled Wood joined the Butterfly list for the day and I could hear Swifts somewhere high above.

Inexplicably tired today so time for a lazy evening I think.

Posted by Howard Vaughan at 11:26 No comments: