I was up the garden early this morning to give things a good soak before another day of blistering heat really got going.  Speckled Woods and Meadow Browns were already up and about and the Meadow Rue was covered in happy Episyrphus balteatus.  The Mother Marsh Sow Thistle is especially vigorous this year and so robust that it has not even needed staking.  At the moment the first flowers awaiting opening are just over ten feet up. My two main plants are nearing ten years old now. 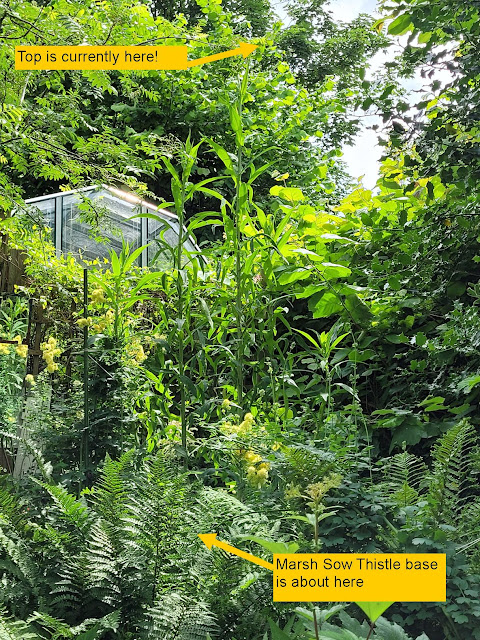 I still have seedlings that I grew last year for re-homing should anyone want to take on this nationally rare and very imposing wetland monster!  Please do ask.

Despite being my day off I had a 10am LotF meeting but once that was done I decided to head out for some Ranscombe Insectology.  It was already showing 30c so I lazily drove up the road and made my way into the woods.

I started my making my way down alongside the railway which was a riot of colour with swathes of lilac Field Scabious and yellow Lady’s Bedstraw through the fence.  I was looking for Andrena hattorfiana and saw one with glowing pink pollen baskets but i was too slow to catch a shot of this large bee.

Down at the Green Bridge the Scabious was lacking the bees but did have its own Longhorn Moth with many male Nemophora metallica air moshing along to their own inner ‘Nothing Else Matters’. Whether the lady longhorns like the lads penchant for heavy metal is unknown?


Common and Ruddy Darters hawked from the coppice edge and Wild Basil and a very vibrant Red Clover were seen.  Meadow Browns and Ringlets were prolific and I found two Brown Argus, a Common Blue and several Marbled Whites but is was so hot that not much was landing.


There were a couple of Six Spot Burnet Moths on the Scabious too and an Agapanthia villosoviridescens flew in before clambering up to the top of a stem while a Paracorymbia fulva was on a Wild Carrot head but too far off for a good shot.  This is the second time I have seen this scarce Longhorn Beetle here. 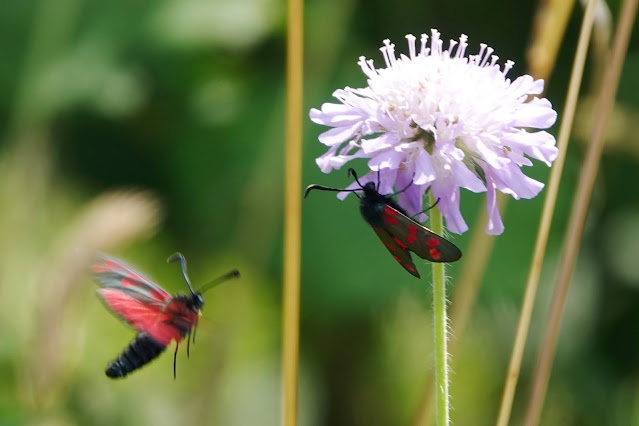 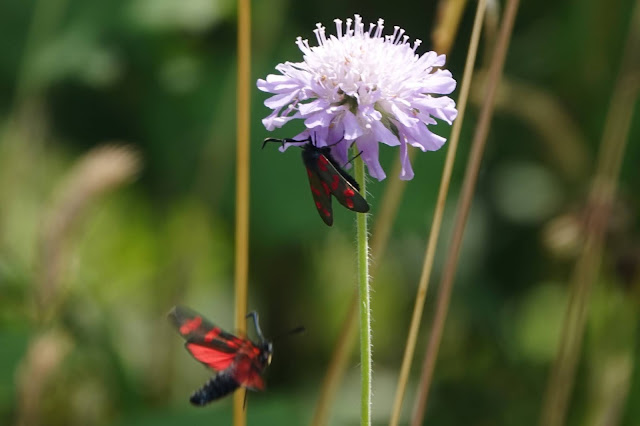 I fought my way into Head Barn Wood and then along the edge of Clay Pond Wood where White Admirals and Silver washed Fritillaries were duly added to the growing butterfly list but as usual nothing stopped.  There were banks of flowering Old Man’s Beard and banks of Creeping Thistle where many ‘Whites’ danced and tussled with Marbleds, Commas and Browns.  All three Skippers darted around and Rutpela maculata  Longhorn Beetles were regularly seen moving from the field margins to the surrounding trees.  An immature Wasp Spider in the grass was my first of the year and I am not sure that I had seen one at Ranscombe before either? 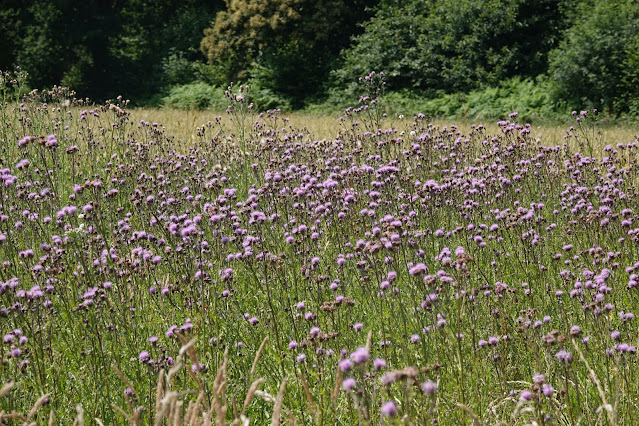 Migrant, Blue-eyed and Southern Hawkers were seen as I approached Birch Wood Corner but I did not carry on around the edge as usual and cut into the woods and up to Five Throws.

The Small Balsam with its pale yellow flowers was in the same spot as last year and the clearing as I came up the gravel hill had at least one Silver Washed Frit patrolling the Thistles and eventually it stopped long enough for an atmospheric shot.


The bee banks on the other side of the path were quite literally buzzing and I could hear the Anthophora bimaculata before I got there.  They seldom stop but every now and then you would see those big pale green eyes before it would dart off again.  There were two other similar sized bees present but I have set my tame bee bods on the case.


Like the woodland edge there were many Rutpela maculata drifting around but another flying Longhorn caught my eye and I followed it until it landed.  It was a fare way off but I managed a couple of pics before it ambled off.  I suspect it was the scarce Black Longhorn – a large old woodland species and I could see the small yellow spot on the scutellum in my pics. 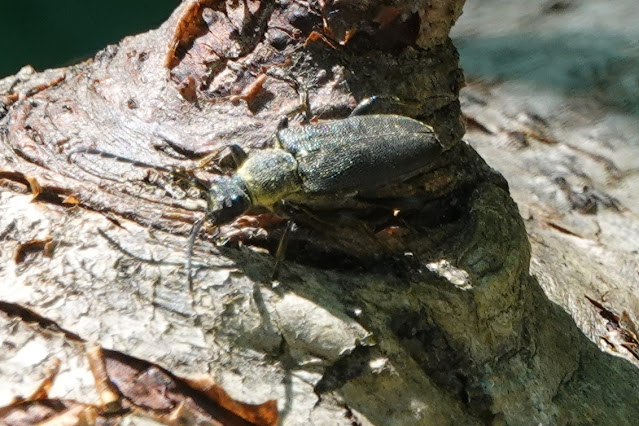 A Robberfly landed on me with its lunch but moved to a more suitable spot to continue its liquid libation.  I think that they reddish leg sections make it a Common Awl.

I got distracted by a couple of large blotch mines on a Sweet Chestnut and found a solitary Cinnabar moth cat on some Ragwort.  Let’s hope there are more to come.

On reaching the main woodland ride I was going to turn right and head back down to home as it was uncomfortably hot but I decided to go left for a short way and was very glad that I did.  I reached a spot where I had had Silver Washed Frits before when a chance glance straight up produced four big pied Butterflies battling around an Oak canopy.  I had found a Purple Emperor Master Oak!  I tried to find a little shade to watch and over the next 30 minutes I saw at least four males and a larger female cruising around. 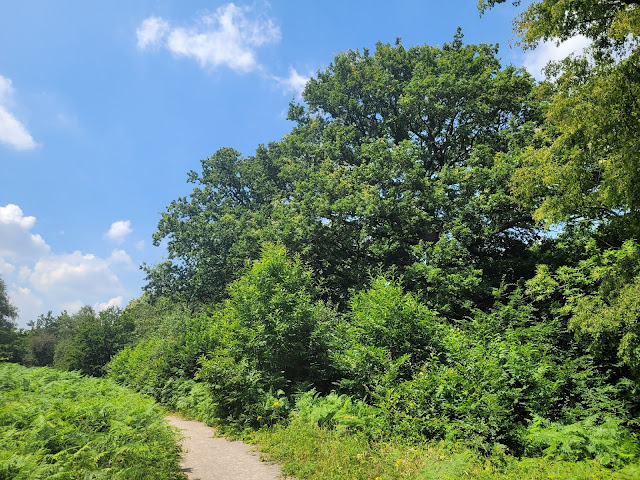 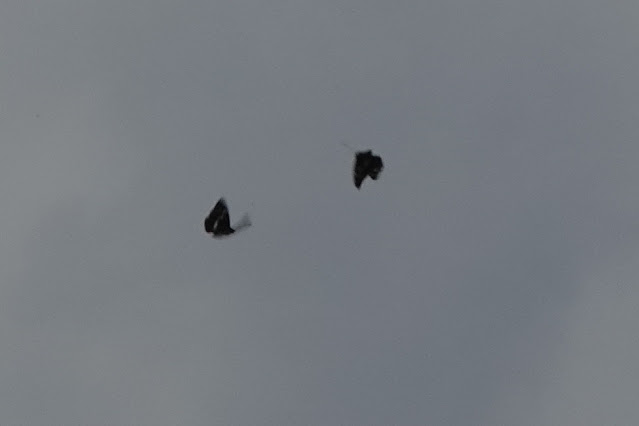 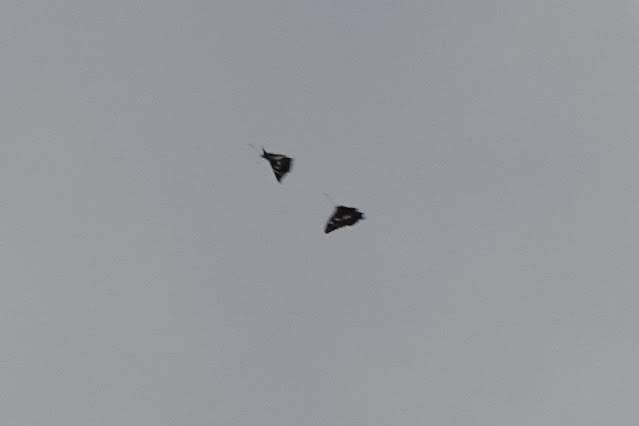 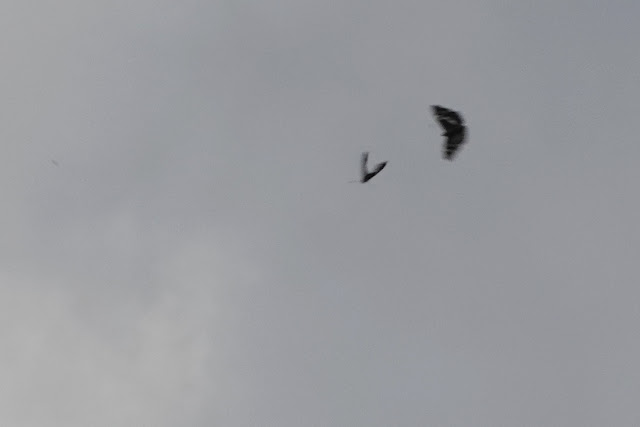 They did not come down at all but I did not care, it was just great to discover this iconic and much overlooked species so close to home.  Most of Ranscombe is Sweet Chestnut with patches of old Oaks, Hornbeams, Ash and Limes and the main path is a good spot to find these other trees.  I seems like the Oak may actually sit at the high point of this section of the wood and you can actually see it on Google Maps.  I have not heard of the species being seen here before but it is not overly surprising either.

One of the males regularly returned to the same leaf on the side of the Hornbeam at about 40 feet up and gave chase is any other males appeared.  Even the imposing Brown Hawker that was using the ride was given serious grief and seen off if it ventured too high.

From here I did start to head back only stopping by one of the wooden benches to watch a colony of Cerceris rybyensis busily going in and out of their burrows.  One had caught a small bee which was not quite fully paralysed and was causing it a few navigational issues as it tried to make a straight line back to its burrow.

While watching this, a beautiful female Gymnosoma rotundatum appeared and spent some time admiring the view.  I first saw this fly species here last year and it certainly lives up to its name.

Speckled Wood was seen on the way back making it a very respectable twenty-one species for the walk with a male Banded Demoiselle near the railway becoming another new Odonata species for my Ranscombe lists.

I was glad I decided that a walk in the sun would be good for the soul...