Yesterday was another damp and miserable day off at home but the prospect that the sun may actually shine today spurred me into early (well post breakfast) action.   I know I could have gone for the Roller or off to dip Mr Ross but I fancied a walk and so set off into Ranscombe with a few targets in mind.  I came through the Albatross Avenue Tunnel – technically Razorbill Close and had to slosh my way through the leafy chestnuts where the path was once more a series of deep slippery muddy puddles made all the worse by the off road bikes.

The Meadow Cranesbills out the other side were in full bloom with that intense almost lilac blue that is so difficult to capture in a picture.  There were still Bee Orchids in flower as I crossed CTRL and a host of new cerise Pyramidal Orchids cones. 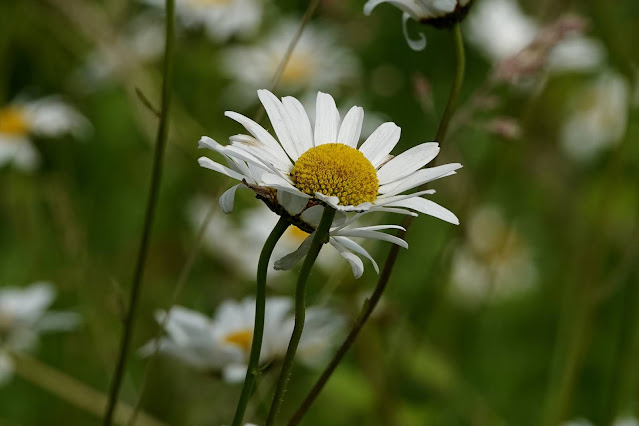 I lingered by the first sunny bramble patch as I had seen White Admiral here last year.  A Red version and a couple of Meadow Browns were seen along with a good variety of Bumblesbees including several Bombus hypnorum and vestalis and another long bodied one that I think is Bombus hortorum.  A Chrysotoxum bicinctum was my first of the year and a Xylota sylvarum was scuttling around the leaves in their usual un-hover like manner.


There were a few Andrena Bees which I need help with and several Labyrinth Spiders had set up suitable elaborate sheet webs between the Bramble fronds.

I headed into the first main clearing which was covered in stands of tall Thistles and St John’s Wort and scanned around for Silver wash Fritillaries but there were only more of the two species seen so far. However I did pick up two very small globular Volucella inflata. I found loads of these last year at Crabbles Bottom Orchard but none up here so I was most pleased.  Cheilsoia variablis were patrolling mini Bramble territories and showing off this long delta wings upon landing and there were Black and Yellow longhorn Beetles clambering over the Hogweed heads with the first Red Soldier Beetles of the season for company. 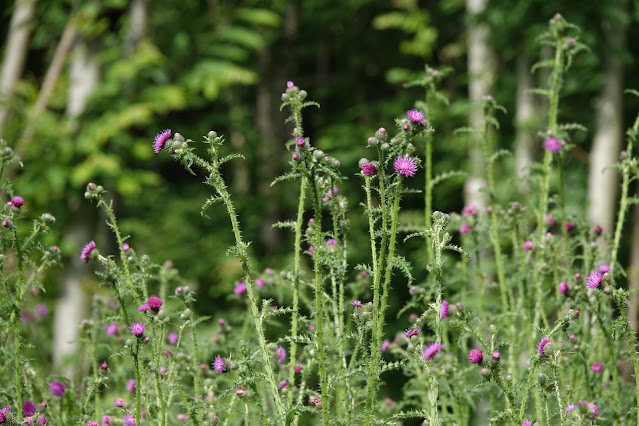 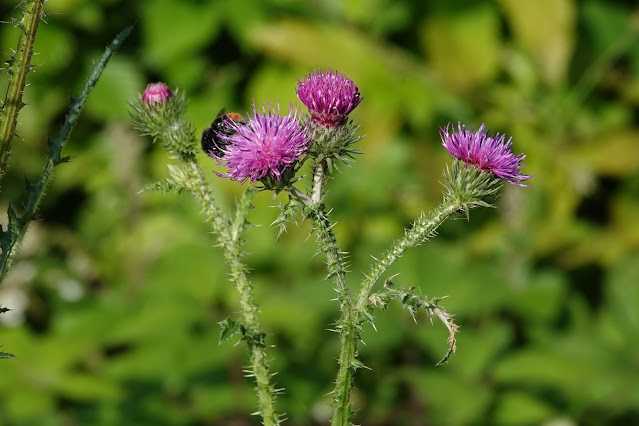 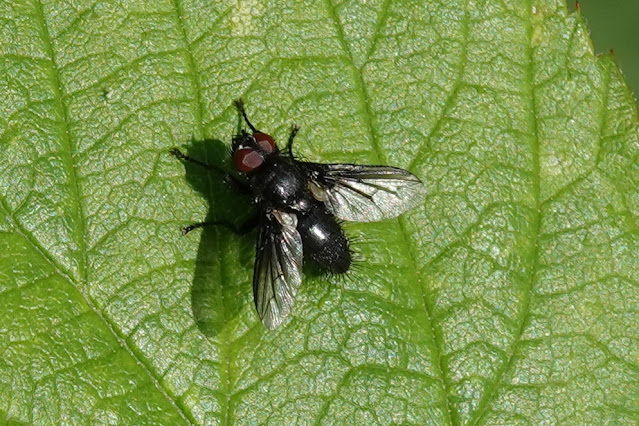 Two Common Darters zipped around and one eventually landed for me and there were little patches of pink Common Centuary here and there. I had to watch my step as there were Wolf Spiders everywhere and some had replaced egg cases for a heaving back of micro-wolves in the making.


Empis tessellata were feeding on the Thistles and my first Field Grasshopper of the year was heard and seen at my feet. It was not particularly well marked on the pronotum but it was very hairy!

Some of the paths were like they were in mid winter and I retraced my steps and took another route not wanting to spend the first day of July flat on my back in a stinking muddy rut.  Volucella pellucens eyeballed me from the middle of the path and I found a two new Beetles which I think are Black Striped Longhorn (Stenurella melanura) and a shiny black Click Beetle which I think is Hemicrepidus hirtus. 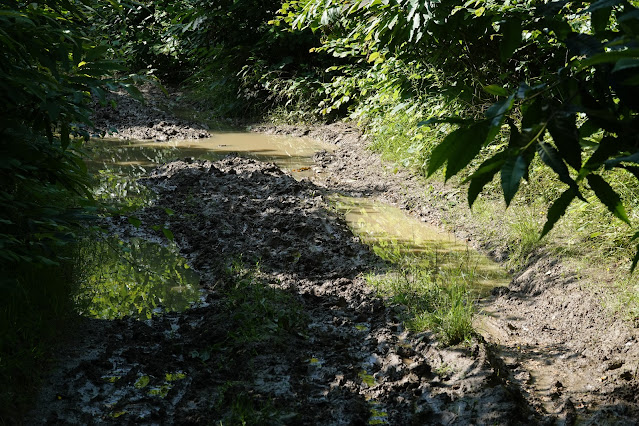 Chrysogaster solstitialis and Chrysotoxum festivum were found along the woodland edge and Bryony Bees were still attending the White bryony although the flowers were now a lot higher up!

While watching these a Garden warbler appeared just in front with a bill full of Scorpion Flies and went into frantic alarm mode so I took a couple of pics and moved on so that it could get to its nest.

I reached Birch Wood Corner and turned towards the Meadow Clary Bench.  It was still in flower but was in the shade and I had my usual few minutes rest there before moving onto the top of Kitchen Field but not before two Blue Eyed Hawkers had been seen and a buck Fallow Deer had raised his velveted antlers from within the depths of the yellow Composite meadow below me. 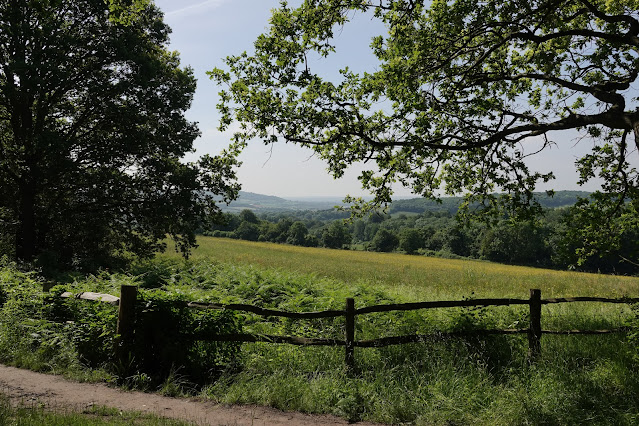 The meadow under and just beyond the trees were littered with probably hundreds of Pyramidal Orchids to replace the spread of Man Orchids from a few weeks ago. The Hellborines were over and had fat seed pods and by looking under the bracken I at last found several of the ‘cambrensis’ form of Bee Orchid.  They were mostly gone over and had struggled under the Bracken but I found a couple of good flowers. 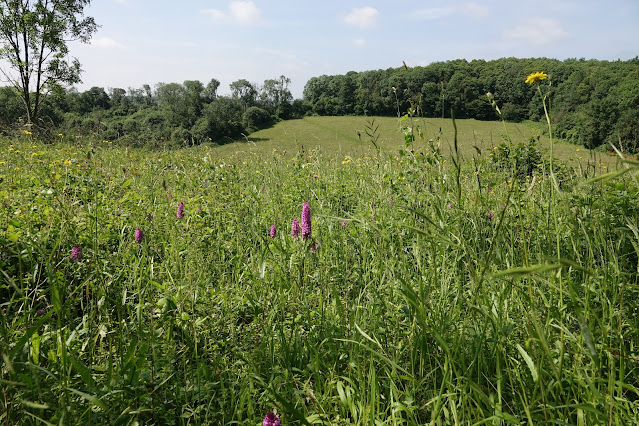 Meadow Browns and Marbled White floated around and my first Large Skipper darted hither and dither while a White Admiral power glided through and kept going.


Kitchen Field is yellow this year rather than red but was punctuated with the blue spires of Viper’s Bugloss and the white of Stinking Chamomile.  I looked for my Blue Pimpernel but the plant had gone over to seed but there was delicate Venus’s Looking Glass within my little flint circle. 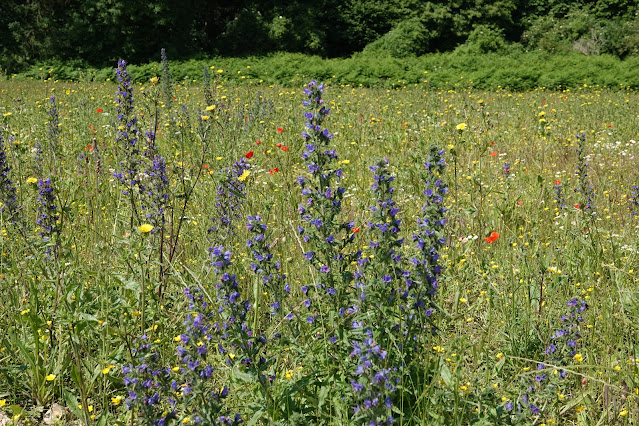 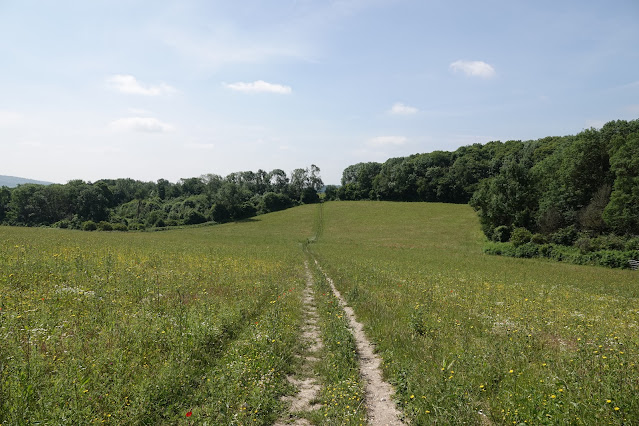 I climbed up to Brockles Field which still had the cattle in there grazing and was pleased to find several patches of Common Broomrape scattered throughout along with more Pyramidal and lots of Agrimony.

I decided to keep going west, at least to the bottom of the next field and picked up several Ringlets, Common Blues and Small Skipper on my way down the slope while Small Heaths and Small Copper were on the open path.

The air was thick with the heady scent of Privet and I found plenty of Bumblebees in attendance along with several more Volucella inflata.

My favoured patch for Silver-washed Frits at the gate at the bottom did not deliver but there were several more Marbled Whites and a female Brimstone stopped for a refuel.  There were odd Sicus ferrugineus watching the movements of the Bumbles and I checked the Burdock for Terellia tussilaginis and duly found one of this smart little Picture Wing Fly.

I double backed on the inside track adding Small White to the tally and after a cuppa on the Wildlife Bench I cut back into Kitchen Field where a Blue Eyed Hawker actually stopped long enough for me to get a shot.  I am about nine miles from the North Kent Marshes where this species undoubtedly emerged and I know they head off to the woods to start with but making it south of the M2 seems a bit extreme! 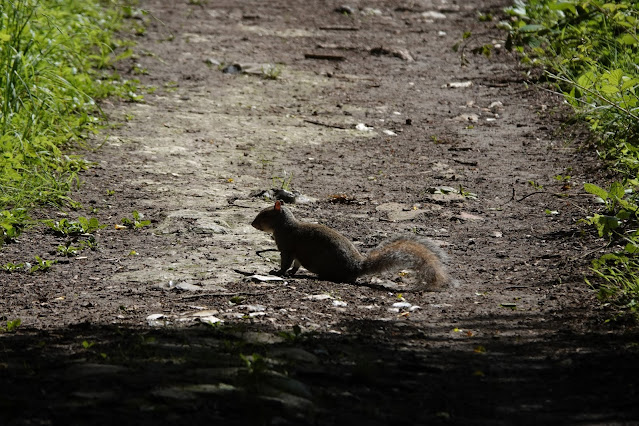 The Valley was largely yellow too but with a few scattered Field and Opium Poppies adding splashes of colour.  Again there were lots of Bumbles to be seen and an immaculate Small Tortoiseshell was seen along with Comma and a tatty Painted Lady. 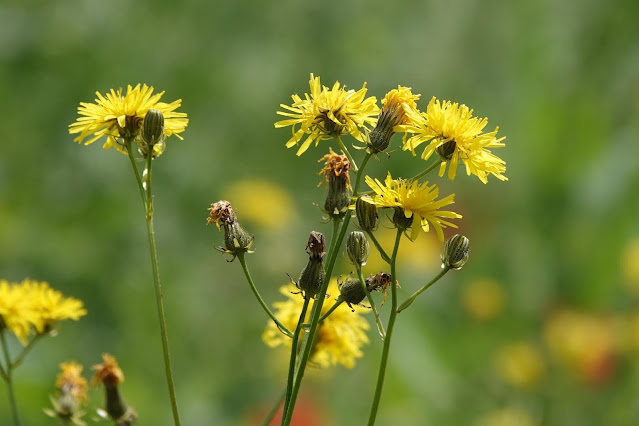 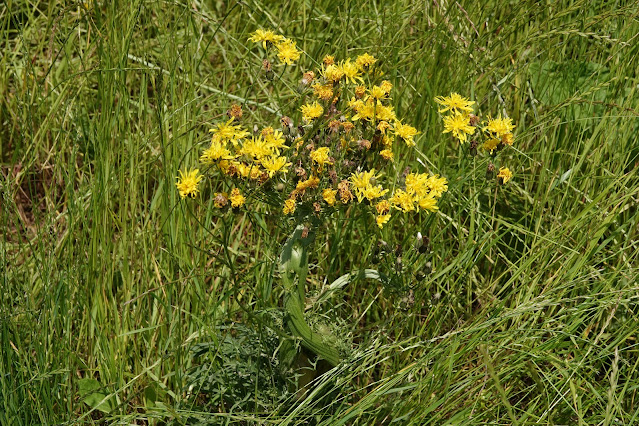 I slogged up the other side passing amore patches of spent Common Broomrape before dropping down into Longhoes where the sea of blue Bugloss last summer had been replaced by a carpet of red and lilac Poppies. It was equally captivating. 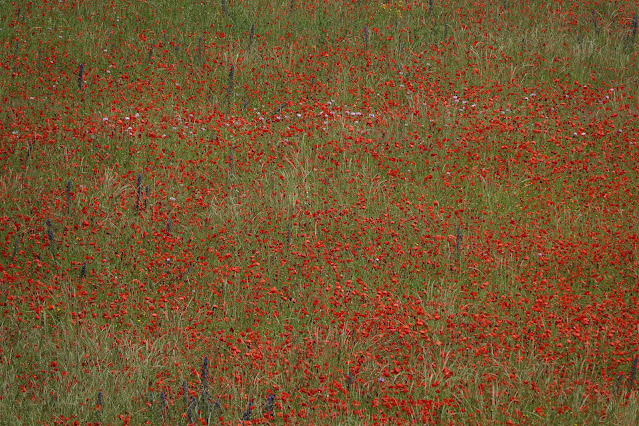 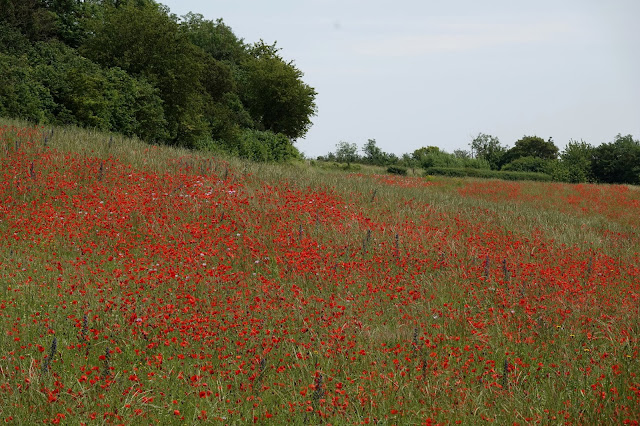 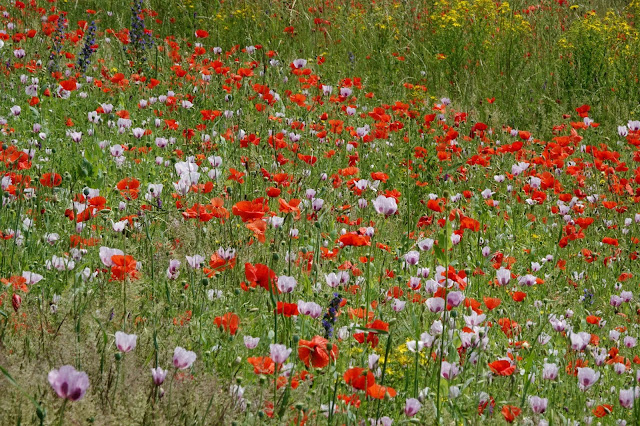 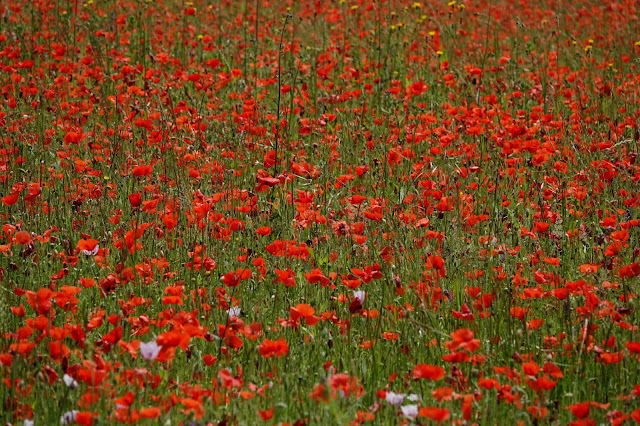 I checked the few bits of Field Scabious for Andrena hattorfiana but there were none and the first Greater Knapweed blooms were out too. I cut through Merrals Shaw where Enchanter’s Nightshade was flowering, to the railway and then up to the Green Bridge.

There were no Small Blues but I did see another Blue-eyed Hawker and a Broad Bodied Chaser and Garden Chafers were dancing around the little Oaks. 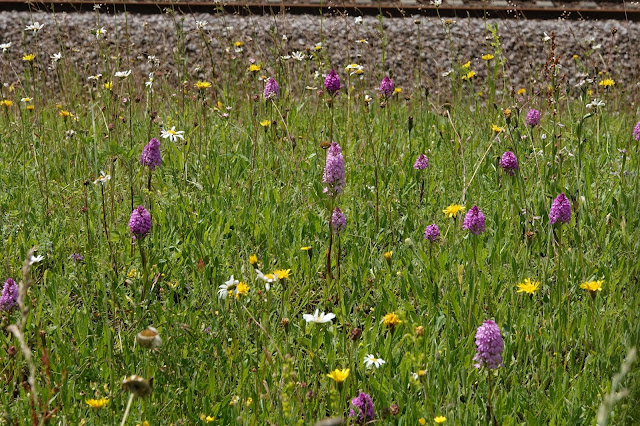 The railway embankment was now a riot of purple Pryamids but most the mega Bee Orchid patch had gone over but they were still impressive.  Back up by the Cranesbills where I began a Large Skipper posed splendidly to round things up.