I had another farm to visit on Thursday and so with glorious blue skies and an already warm sun I decided to have a preamble up the Mar Dyke from the Aveley end.  I did not get very far but I am always impressed by this river valley ecosystem.  It has proper escarpment sides and the river naturally overflow creating a series of very wet field with pools and patches of Phragmites, Loosestrife and Pendulous Sedge and I can understand why Ruth B spends so much time down here.  There were Moorhens clucking and the odd Little Egret out there but it was the insects on the path side that kept my attention with my first Willow Spreadwing of the year getting me off to a good start. 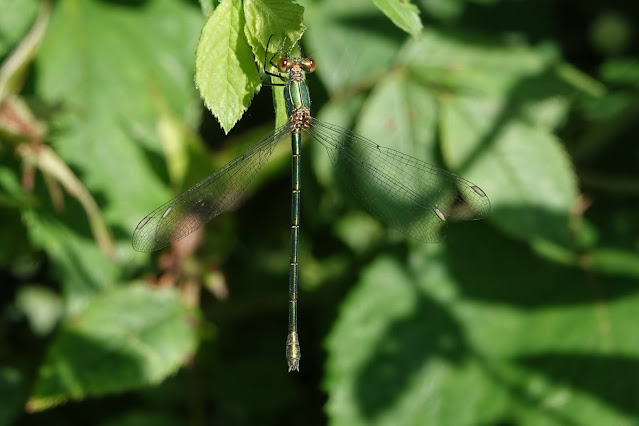 Episyrphus balteatus were abundant once again along with a selection of other common species and were sharing the Hogweed and Composites with default Red Soldiers, Rutpela maculata and Oedemera nobilis beetles.  I was very pleased to find my first Essex Golden Haired Robberfly Choerades marginatus.


I did find a nice Graphomya maculata along with many Greenbottles and Sarcs.  The usual Bumbles were present including Bombus hypnorum and Tony M helped me indentify another wasp as Cerceris arenaria.

Several Gasteruption jaculator (or similar) were noted along with two smart Plant Bugs.


There were Butterflies everywhere with Whites, Meadow Browns and Commas all along the path.  At one particular point where there was a run off puddle from one side to the other they were gathering to collect salts much in the manner that I have seen in documentaries in sweltering hot tropical countries.

It was quite captivating to watch mini cloudlets of Green Veined and Small White drift in and out, tussle and clash over the best spots before setting down for a short while to unfurl those clock spring tongues.  The Browns stayed away but Red Admirals, Commas and the odd Small Skipper popped in for a lick while dozens of wing flicking dancing Poecilobothrus nobilitatus strutted their funky stuff in an effort to woo the ladies... 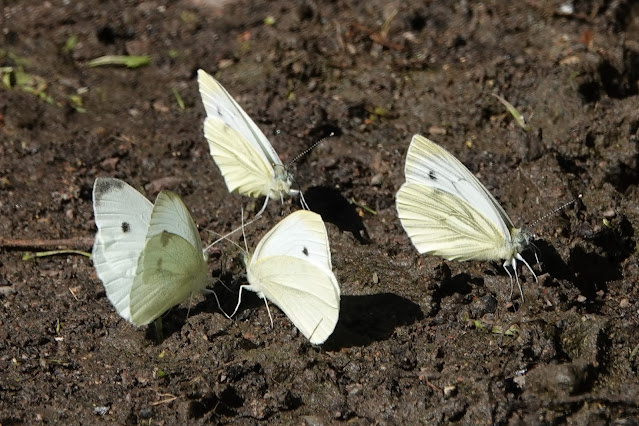 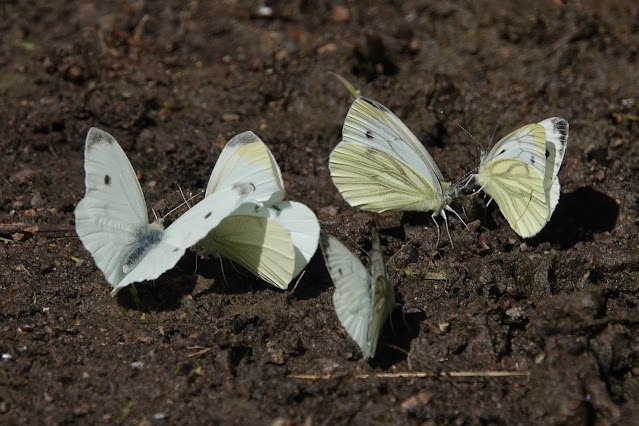 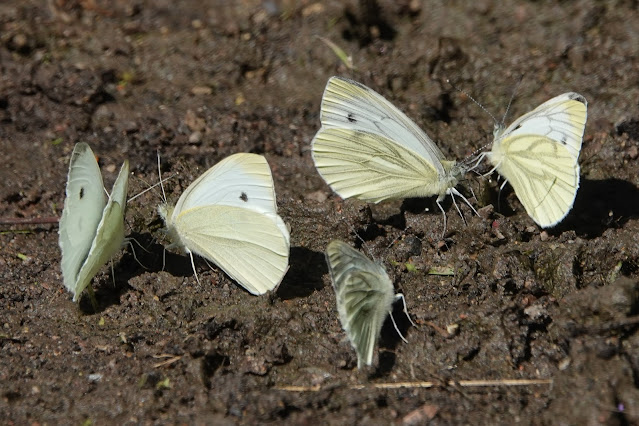 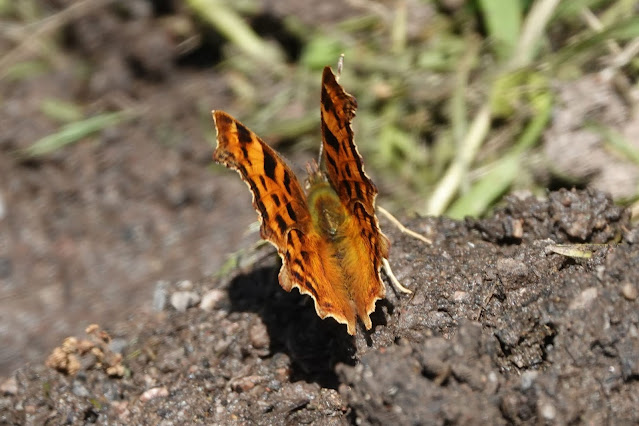 The rest of my morning was spent in the as ever entertaining company of George Young at Home Farm in North Ockendon. In fact it butted right up to the farmland that I went to see on Monday.  It was a most productive tour with some great ideas about re-hedging those field margins that had been grubbed out many moons ago where only mid-aged lollipop Oaks now stood.  It felt that they had all grown up within a hedge as there were no lower branches at all and almost none were of a very great age. 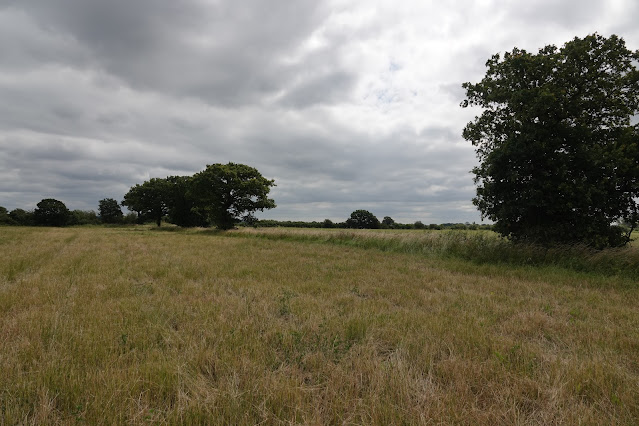 We looked at some lovely ponds and others that could do with some help and nosed into the now narrow Mar Dyke that flows along the margins.  It felt a little clogged with Branched Burr-Reed to be honest but it was alive with Dragonflies despite the fact that the sun had gone in and the wind got up.

Banded Demoiselles flitted around and both Black-tailed Skimmers and numerous Scarce Chasers zoomed up and down. To see so many of the latter was great as they are still colonising south–Essex.  Emperor, Darters and a few ‘blue’ Damsels were also noted.

Yellowhammers were singing from the odd good bit of hedge and top of the Oaks and there were also Skylarks and a male Reed Bunting too.  I look forward to visiting again and helping George to get pointed in the right direction to make his ideas happen.

And so back to Rainham for the last two hot stinky days on Reception.  Visitor numbers remain very low but it did give me the chance for my usual insectoidal forays within sight of the desk!

I thought that I saw the dinky Osmia spinulosa vibrating madly on the Ragwort last week but managed some nice shots of one on Friday that I believe is correct.  Love the spotty eyes.  A Small Copper and several Skippers were also present while the Volucella zonaria were still patrolling the fading Privet with many Whites and a couple of Red Admirals. 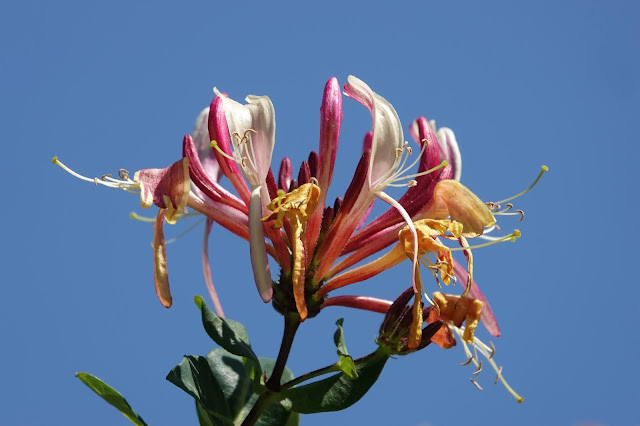 Today was even hotter and we watched the Echinops visibly wilt in the heat as the afternoon wore on.  There were more dragonflies today and four Hawker species were seen from our table with two Blue Eyed (including a full male), the first male Migrant and amber winged Brown and a gleaming blue and green Emperor.

Brimstone and Holly Blues were new additions to the week and a single Gatekeeper was my first of the year and somehow I managed to get a shot of a Coelioxys bee in flight that shows the sharp tail but I suspect does not help narrow down the species.

Bombus vestalis, terrestris, lapidarius and pratorum were on the Lavender and the scent was coming off it in hot waves, which was quite intoxicating and I almost caught a Wool Carder Bee actually carding in the Lambs Ears.


At about 4pm I began to notice the Black Ants rising from the grass and I counted five nests around the wildlife garden area all spewing forth a frenzy of winged females about to set off on their treacherous journey into the unknown.  There were thousands of them and within seconds the Black-headed Gulls were spiralling above and snapping at tiny specks that only they could see.  A juvenile Med Gull following one of its parents pitifully whining but did not stop for ant dinner but about 40 Swifts appeared from nowhere and dashed back and forth silently no doubt due to their mouths being permanently open to hoover up plump morsels.  Down lower the House Saprrows soon cottoned on too and were shoving beak fulls into baby gullets. 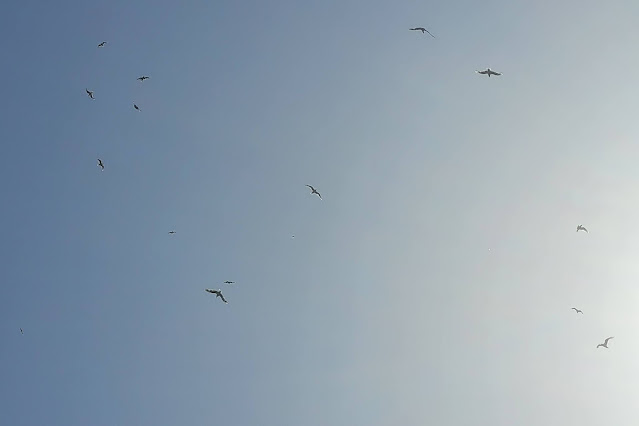 Tomorrow is meant to be even hotter so perhaps there may be more insect opportunities...