It dawned bright and still and so Busta House was an obvious stop on the way out for the day with the chance to check the gardens without the foliage thrashing around like some rabid Harry Potter tree.

It was still disappointingly quiet but a Barred Warbler appeared from nowhere having announced itself to David with a machine gun rattle and just like the bird at Garderhouse Voe it soon left the roses and began gleaning aphids from the Sycamore canopy giving excellent views as it lumbered around.

I sauntered down to the tiny quay to watch the Black Guillemots and Mergansers on the calm water while Wrens clambered around and a male Merlin hurtled through in his quest for a Starling breakfast. The sea bed here was teaming with small blue-grey Cushion Stars and fish darted through the weed.


Southwards towards Sumburgh for the first time and a as is the norm the weather turned on us with grey skies and icy rain. We could not find any Snow or Lapland Buntings around Grutness but a couple of Eider and a Grey Seal (I think) bobbed in the bay before we headed up the quarries where the Marsh Warbler was found in no time at all.

This was another of those instructive birds and like the River warbler it was great to see one creeping wound horizontally and not sitting up on top singing where it becomes an entirely different bird.  There was nothing about this warm buff bird that even suggested Reed Warbler. The throat still gleamed white, the legs were very pale and the tertials were marked more like a Whitethroat which coupled with the long pale tipped primaries made for a winning id combination.

The local Fulmars cackled around us and a Wheatear and thistle loving Yellow-browed Warbler were the only other birds present.

There seemed no point in heading for the Head so we double backed to Boddam where a nice olive and buff Rosefinch was easily found feeding on Perennial Sow Thistle with some House Sparrows and Twite around the edge of the bay.


At this point our plans were somewhat disrupted by news of a Pechora way up on Unst.  We were almost as far away as possible but with Peter and Bob needing this enigmatic species it was a no-brainer and thus the three island hop began.
The ferries required some waiting around and I amused myself at Gutcha on Yell with trying to photograph the interesting fish I could see in the crystal clear waters.  Still working in them but will add names once I have figured them out.

Peter, meanwhile took some stunning shots of the Kittiwakes perched up by the ferry terminal.

We arrived at Haroldswick to discover several people standing in the middle of a very wet field. They had seen and heard a Citrine Wagtail fly over but the story of what the pipit had done was somewhat cloudy and thus when a few more people were on site we set about a systematic sweep of said field.
Rather unsurprisingly we put up no pipits with just a few Snipe and our first ever Shetland Water Rail.  The small crowd largely dispersed and we set about spreading out to check the surrounding ditches, damp fields and wall margins.
Suddenly I heard a buzzy Wagtail and the shout went up from several points for Citrine. I picked it up bouncing over and dropping into a stony croft.  There were others closer than me and by the time I got there they were looking at the back of their cameras at something that was quite obviously not a Citrine but a mono-chrome Yellow Wagtail.
We soon relocated it and over the next half hour it led us a merry dance as it bounced around the paddocks in the loose company of a few Meadow Pipits and although it never came close we all got some great views and heard it call on numerous occasions.

It appeared that we had ourselves an Eastern Yellow Wagtail and with it the potential of a tick of this split out form of our own flava! 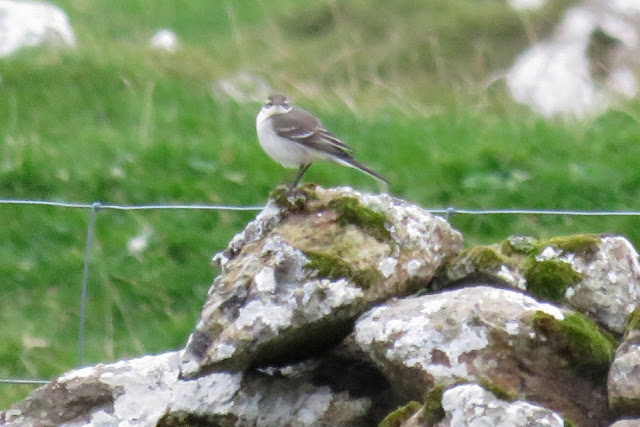 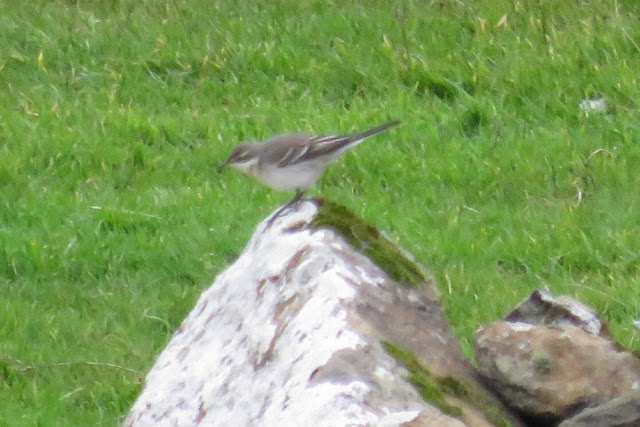 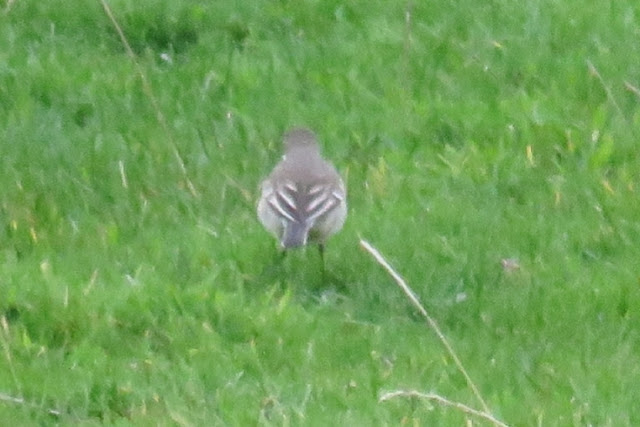 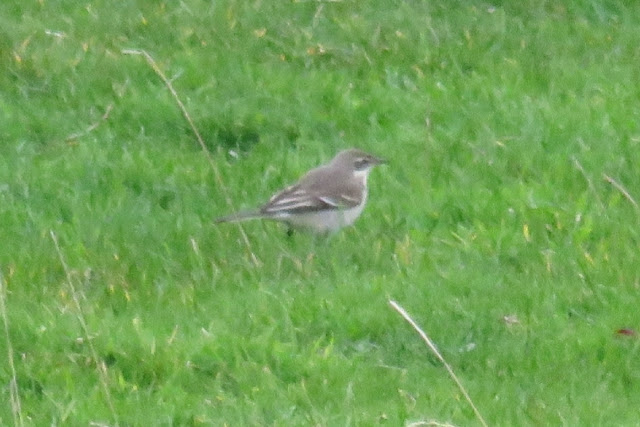 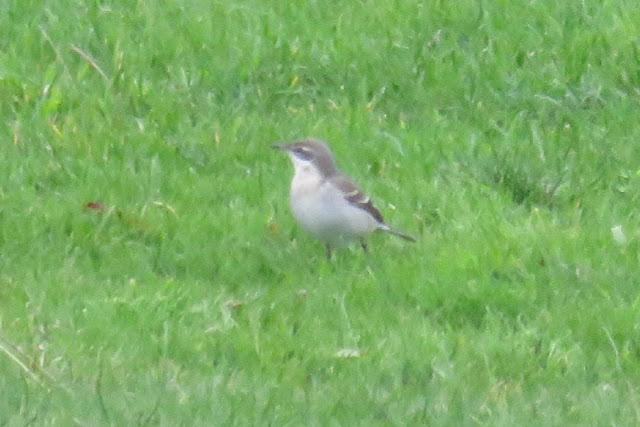 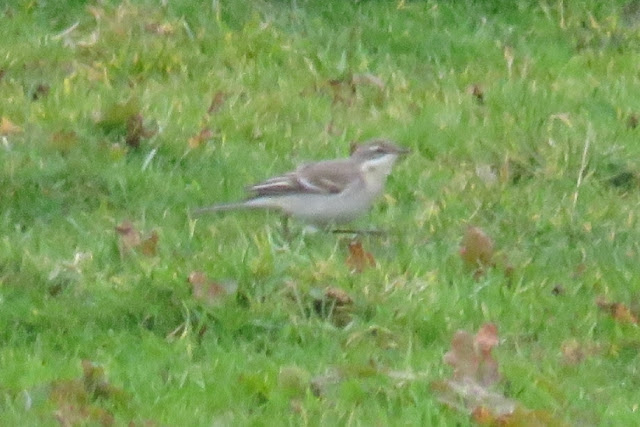 From reading up on the way back home were discovered that there has not been an accepted record without either or both a sound recording or a DNA sample. At the time we believed that we had neither although subsequently it would appear that someone did in fact record it.

This striking grey and white bird seems to tick the appropriate boxes on plumage, call and even hind claw length and those with more patience that I may have to wait a bit longer for that ink it in...

We headed for home safe in the knowledge that we had been in the right place at the right time even if the pipit did became a wagtail...
Posted by Howard Vaughan at 19:18 No comments:


It was blowing hard when we got up with a sky split between rain-heavy, fast moving clouds and blue sky. The forecast suggested that we may be better off up on Unst where the weather may be slightly more settled from mid afternoon and so with news of the River Warbler at Houlland coming on we headed for the double ferry crossing to get there.

The journey was uneventful and the Yell Rally not entirely necessary and we were at the remote hillside site before lunch.

There was no one else there and it took a little while to locate the correct Iris filled gully but not before the heavens had opened and seen us sheltering among the sheep poo behind the wall of a deserted cottage until the worst of it had past.

Two other birder had now arrived and had seen it almost immediately and a few others were now appearing on site.

We had envisaged that it would need to be ‘found’ but advise from others had recommended a wait and watch approach and this indeed proved most worthwhile with superb views of this most skulking of Locustella as it crept and scurried mouse-like through the foliage. Having only had a couple in the UK with the last in Wigan way back in June 1995, it was most satisfying to be able to see another. 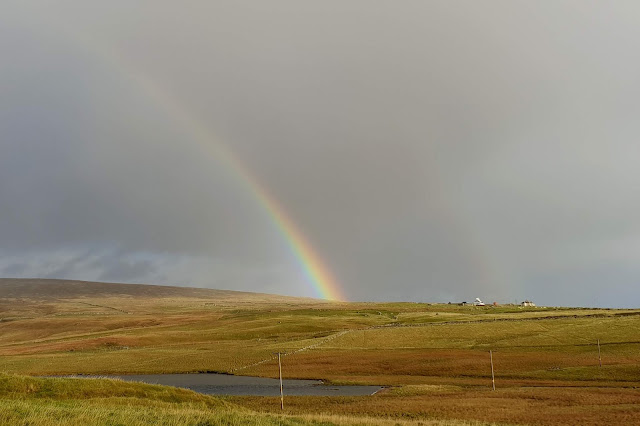 It is amazing how different a species can look away from what you have normally experienced. My previous birds had been singing males sitting almost vertically, exposed on a willow with head up and bill open and tail quivering along with the staccato reeling. The views we had at Houlland were if anything all the more gratifying.  We even returned later in the afternoon for cheeky seconds by ourselves when it gave even better views having just had a bath in the little stream. 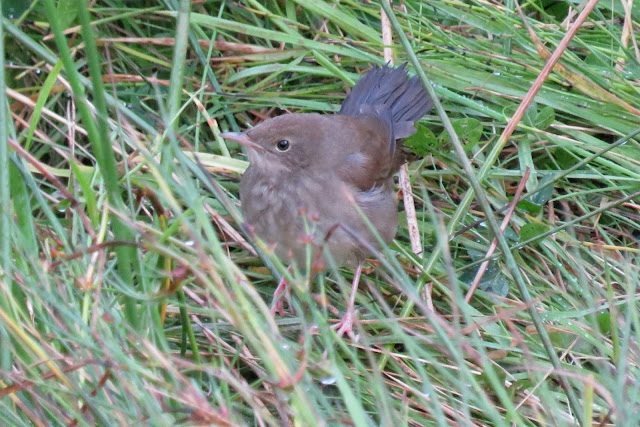 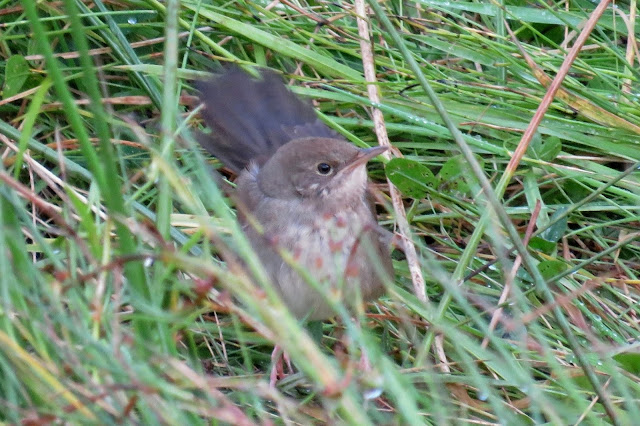 Norwick is always a memorable spot and although a Kestrel, Wheatear, three Blackcaps, Chiffchaff and 70 Twite did not set the notebook on fire, it still has the power to capture you.  There is only one settlement further north from here, Skaw, just over the hill and you feel that there is nothing between you and Norway bar a rolling deep blue sea and a blizzard of Gannets and Fulmars.

A very robust dog Otter fished along the beach and became number seven. He knew we were there and was unperturbed and slipped silently away when he had finished his snack. 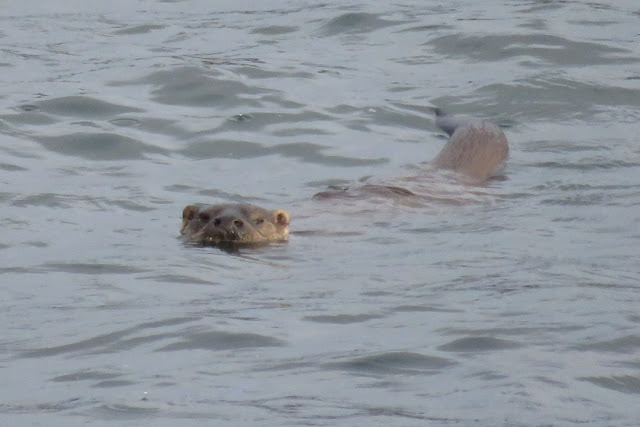 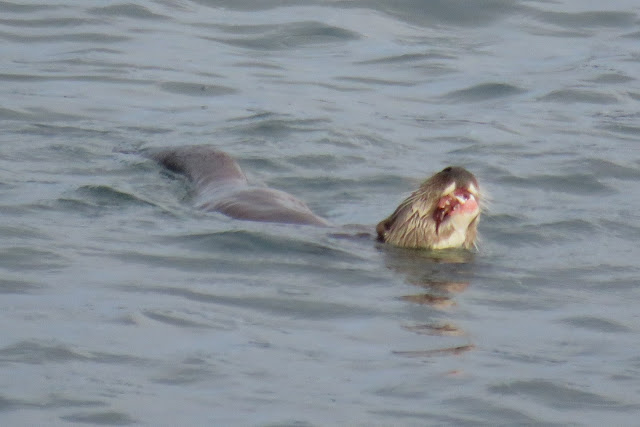 We gave Uyeasound two attempts for the super smart American Golden Plover before we found it feeding very loosely with a flock of Goldies in the field behind the house of our 2016 Siberian Thrush discovery... happy days.  Rather oddly it never flew when the main flock had a panic and simply hunkered down.  It did this twice while we were there. My first in quite some time and a new Shetland bird for me.

A female Merlin zoomed through and 27 Tufted Duck were with 13 Whoopers and two Mute Swans on Easter Loch but we could find no Yanks.

A trundle up the road produced a sudden stop as a little bird flicked in front and landed on a fence. ‘Yellow-browed Warbler!’ Dave and I shouted! Who would have thought that we would be so enthusiastic about a little waif that we have always taken for granted up here?

Anyway this stripy gem performed fabulously on the garden fence while we watched from the car.  Birding is always about perspective and something that is common one year (we had 160 in 2016) can be suddenly be the highlight of a day in another. 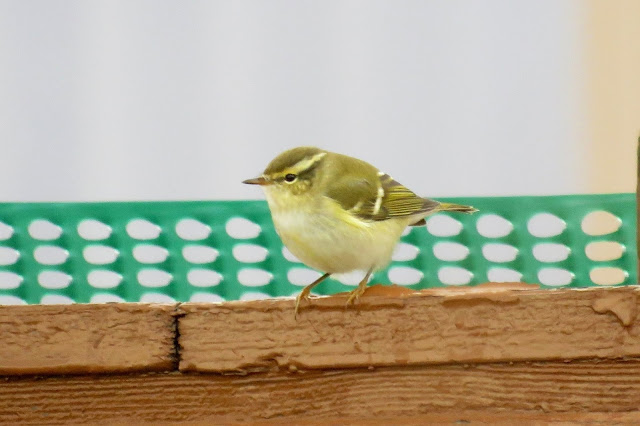 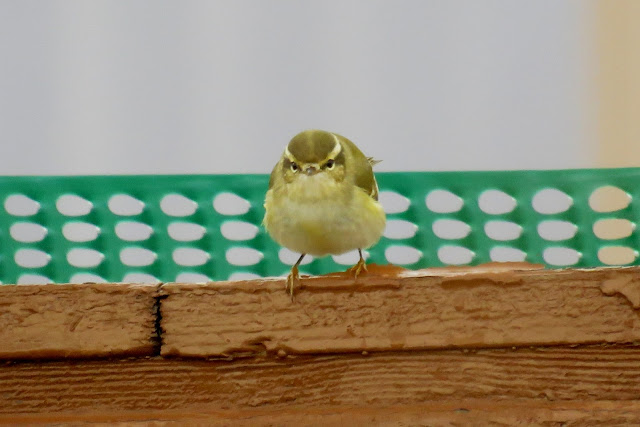 A final dog Otter at dusk back at the ferry at Belmont rounded off a surprisingly good day and our gamble of a trip north had paid off.

Posted by Howard Vaughan at 19:57 No comments: