Yesterday was meant to go like this... drive to Colchester to get the car MOT and service done, visit Thomas Cook in town, collect car and go birding.

However, it did not quite go to plan. After negotiating the Colchester rush hour and dropping the car off I ambled into town for a coffee and to locate the TC shop so that I could finalise my Lesvos trip details. Alas, where my Google map told me the store should be was a To Let sign and from talking to other people it had not been there for several years. Nevermin, I thought but with time to kill I spent about an hour pottering up and down the maze of little street with their secret, hideaway churches and tiny cemeteries.  Goldcrests called from the ancient Yew trees and the odd Blackbird flicked leaves under gravestones while Pied and Grey Wagtails scuttled and bobbed up the streets. Jackdaws chatted on the church spires and already territorial Herring Gulls patrolled the skies. 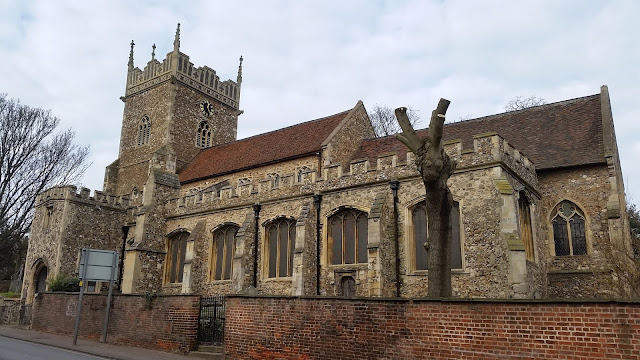 Suddenly I realised that I was actually doing some proper Urban Birding. There are always birds wherever you are and on getting back to the garage and finding that my car needed some ‘extra work’ I decided to explore further and see just how much I could see in a couple of hours wandering from the centre of Britain’s oldest city out to the eastern edges where the River Colne cuts through the slowly regenerating industrial (and now residential) area around the Hythe and out towards the University and Wivenhoe.

Early on it became very obvious that although the front gardens were small, they had not been paved or gravelled and nearly everyone had a Pyracantha or Privet hedge and as hoped there were House Sparrows merrily chirping away from the security of cover or proudly giving it large from a chimney pot! Blackbirds were everywhere and by the time I got down to the River they were to be found in small parties wherever I looked. Rosehips seemed to be the preferred choice but a huge Cotoneaster was also very popular and also held Greenfinches, Song Thrushes and a couple of Redwings.

The first part of the visible Colne was right in the middle of some new flats and the low tide mud was being squibbled with abandon by many smart Teal while Moorhens fed closer to the vegetated edge and both Common and Black-headed Gulls loafed about. 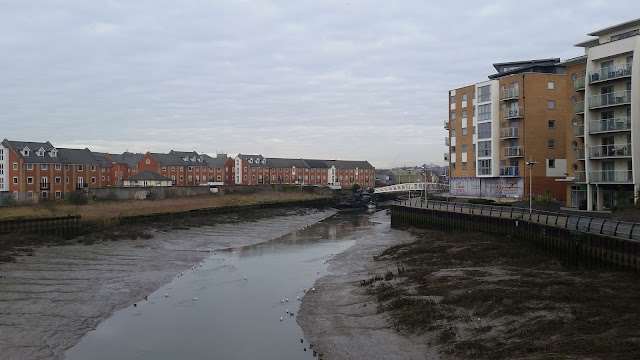 Very soon I was picking up Redshanks working their way amongst the ice strewn saltmarsh where they poked around in carrier bags and under the odd frozen Monster Munch packet! The first of several Little Grebes was seen keeping very close to the red Lightship and at times only had its head above water.


The sewage outfall also held Dabchicks as well as a couple of Cormorants but there was no sign of the dog Otter that had been seen here of late. I believe he likes the rising tide and this one was still falling.  Several Pied Wagtails hovered over the surface to glean who knows what from the scummy foam that was issuing forth.


A little further on I heard a Chiffchaff call from a yard on the opposite bank and four Goldfinch fed in some ornamental Alders but there were none of the hoped for Siskins.  Grey Plovers and Black-tailed Godwits started to appear and seemed completely unphased by my presence or the banging and crashing coming from the riverside works.  The Greys were especially nice to see. They have such big expressive eyes and mournful calls that fitted in well with the calm and slightly murky light.


A party of six Rock Pipits appeared from the field behind me and all sat on the overhead railway cables before coming back down to the river. They were behaving more like Meadow Pipits by perching up like this and as two of the latter were also present perhaps they were copying their longer clawed cousins.

Little Egrets waded up river in the shallows making frequent darts for tiddlers, using those wiggling yellow feet as lures

I was starting to enter into true countryside with the Hythe Lagoons hidden on the south side and fields and woods to the north so after a check of a wondrous grassy field full of enormous Yellow Meadow Ant hills and happy Curlews and Starlings I decided to turn around and head back into the urban realm I had come from.  I added Mallard, Wigeon, Canada Goose, some more photogenic Teal and two weed eating Mute Swans on the way back as well as a raucous Jay, two Reed Buntings and a pair of very vocal Bullfinches.

I trudged back through the streets up to the city centre and my now serviced car, still checking those berry covered bushes for a dark-bibbed Black-throated Thrush.

And so my Unintentional Urban Adventure had actually proved most rewarding with 55 species seen and a pleasant walk to boot!


So, with my car now done and my wallet now lighter I headed south out of town toward Abberton Reservoir which was almost completely frozen between the causeways. The gap in the ice was jammed with diving duck; mostly Pochard but with a few Tufted Ducks and Goldeneyes.

The main body of the reservoir was ice free but unfortunately there were only two Goosanders and they were choosing not come to the outflow channel to feed and avoided my camera.  The Slavonian Grebe was still present and at least the water was flat calm and the birds were easy to see.

With not much else to see and the cold biting, I moved on again and a brief stop at Little Wigborough Church gave breathtaking views of a Barn Owl gliding around me with a vole in talons on silent angel wings.  It may have been silent but the local Kestrel had seen it and gave it a good thump to try and get it to drop its dinner but thankfully the owl hung onto its prize.

The general murk was actually lifting so I stuck with my original plan and made for Heybridge Basin for a walk around the pit with waders, geese and hopefully, the elusive Great Grey Shrike in mind. The tide was right out and the light was superb and lit up the countless waders feeding on the Blackwater.  Both Godwits, four Plovers, Dunlins, 300 Avocet, Oystercatchers, Turnstones and both Red and Greenshanks probed, skimmed, sieved and investigated the mud, shingly patches and weedy clumps for an invertebrate or mollusc meal.  A flock of about 700 Dark-bellied Brent Geese moved on mass from the Maldon Dump area to Northey Island opposite and some came in to bathe and preen in the main river channel with much grunting and cackling. I searched through them for anything different but to no avail. 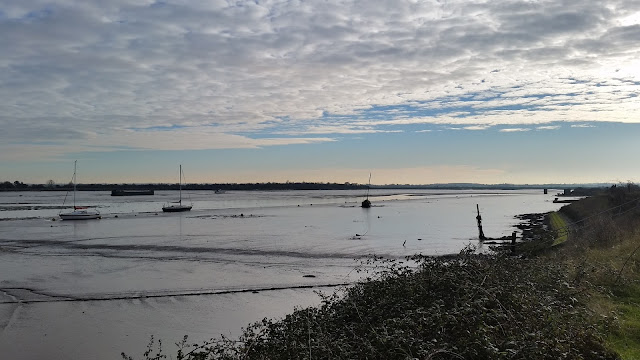 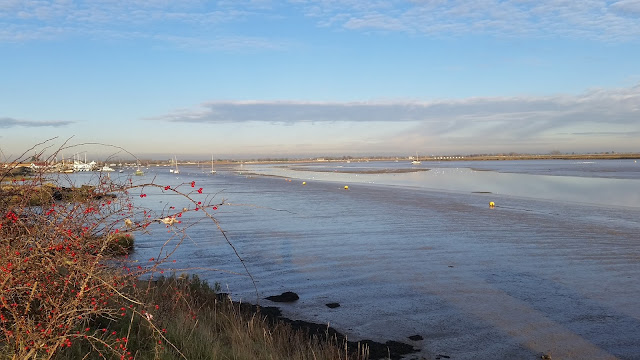 I got to a point where I could scan the bushes in the reedbeds at the far end and much to my delight I soon picked up the Great Grey Shrike as it surveyed its current winter territory from a bare tree.  This is the first one I have seen in a while so I was very pleased to catch up with this mobile bird. 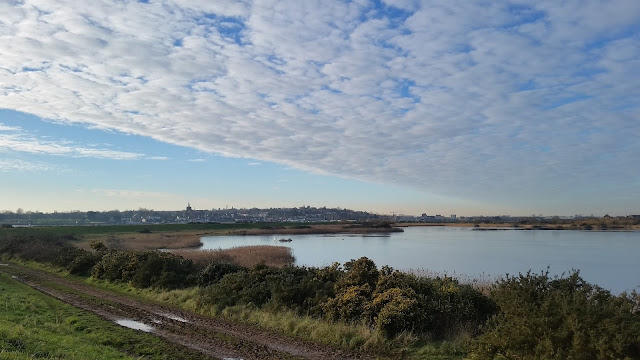 It would have been nice to go closer but time was pressing on so I started to amble back picking up the Water Pipit on the lower path before it flew onto the saltmarsh and hearing a Cetti’s Warbler belting out from the reeds.  The light on the waders was even better going back and I stopped for a while and closed my eyes to drink in the sounds of an Essex estuary in full feeding frenzy. There was not a breath of wind but cloud was moving in and it was time to go. 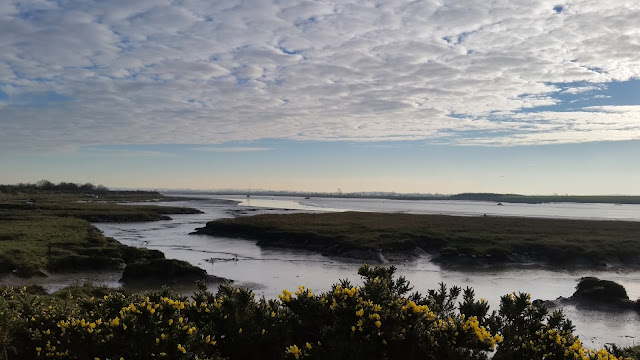 My journey back to my parents in Ilford went very well and as I was coming past Rainham at just before 1630, I realised that it was going to be a cracking sunset so I zoomed down to the little car park at the end of the river wall and captured the last few minutes as Sol dipped below the skyline and the river turned pink and to cap of my unexpectedly good day one of our Short-eared Owls was watching me from a post in the rapidly failing light... 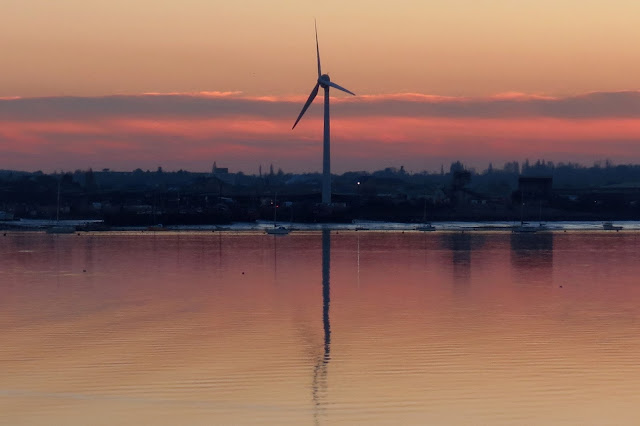 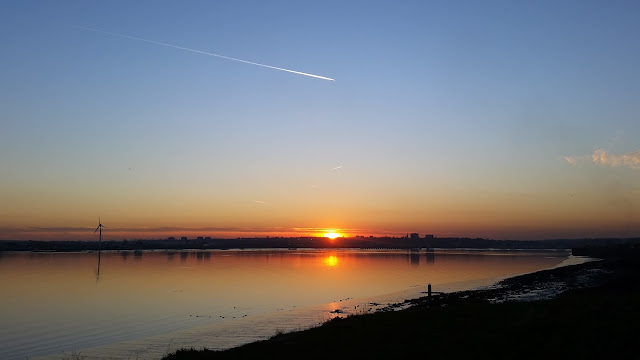