We landed at San Jose on a steamy evening just before sundown but a lengthy wait to get nervously through customs precluded any from the van birding on the way to the Robledal Hotel on the outskirts of the capital. However, while waiting for Ramon to fight his way through the traffic to pick us up, noisy Great Tailed Grackles were seen in the palms by the taxi rank which gave all the newbies their first tick of the adventure.

It was good to see Steve and Gina again and we were soon booked in for the night and eating ‘dinner’. A concert was going on somewhere nearby and the planes were so low that they felt like they were going to land on the hotel but it all went quiet before too long and there was just the sound of the wind, city life, cicadas and occasional ‘poo, poo, poo’ of Ferruginous Pygmy Owls to lull us excitedly into our first sleep back in Costa Rica.

Unsurprisingly I was up with the lark or in the CR case, the Clay Coloured Thrushes who make up the bulk of any initial dawn chorus regardless of where you are.  I stood outside and listened to the hotel grounds wake up and was joined before too long by most of the party.  Dad, Julie and Angie came last time and knew what to expect but it was still good to see the anticipatory smiles so early in the day.

The Thrushes were soon joined by the Flycatchers with Tropical Kingbirds (TKs), Kiskadees and Social Flycatchers on the wires and foraging around the palm fruit and two illuminous Spot Breasted Orioles bedecked in orange and black became the first new bird of the trip for me although they did not linger long. Summer, Blue-grey and Palm Tanagers squeaked and a pair of Lineated Woodpeckers came in and landed on a palm stump just a few meters away before performing a ‘you can’t see me’ dance around each other. Red Billed Pigeons and White-winged Doves were cooing in various ways and pairs of scaly Inca Doves tottered around the lawns.

No more than ten steps had been made from the room at this stage and so with everyone up we had a look around the grounds where chipping Yellow Warblers were up I the canopy along with a Yellow-green Vireo and several Baltimore Orioles. There was no one peering out of the owl box but the Ferruginous Pygmy was soon found glaring furiously down at us from a tree. Despite being a common species we only saw one last time so it was good to have such close prolonged views on the first morning.

House Wrens were in song and Rufous Backed Wrens soon joined in and could be seen clambering around. Seeing such a big wren for the first time was a surprise to most.  Melodious Blackbirds and Grackles strode about the lawn and two Cinnamon-bellied (used to be Grayish) Saltators were picking at flower buds. Quite a few taxonomic changes have occurred since my first visit and I will do my best to keep up to date!  Cinnamon Hummingbirds were around the Verbena but we could not find the Canivet's Emeralds but a male Plain-capped Starthroat was ample compensation.


The first Black and Turkey Vultures cruised through the blue and Yellow-headed Caracara and several Snowy and Cattle Egrets came over while small groups of Finsch’s Parakeets whizzed over but never stopped. Blue & White Swallows milled about and with them were Barn and Northern Rough-winged Swallows.

I was already excited by the collection of pre-breakfast birds and I am sure that the others were similarly enthused. I remember that first morning in 2020 all too well; everything new, unfamiliar and exciting.

Breakfast was taken (like most places) almost outside and a male Summer Tanager and pair of Hoffmann’s Woodpeckers joined us for their own fruity repast.

It was soon time to hit the road for the drive north and there was plenty to see en route through a largely agricultural countryside dotted with the exploding golden sulphur yellow crowns of the flowering Yellow Cortez (Tabebuia ochracea) trees. We encountered Crested Caracaras, Grey and Broad-winged Hawks and a White-tailed Kite amongst the raptors, urban Grey-breasted Martins, the odd House Sparrow (although Steve suffered almost permanently with 'Sparrow blindness') and Common Ground Doves, a swirling flock of huge White-collared Swifts and Great White Egret, Anhinga and Ringed Kingfisher on a roadside pool.


A coffee – milkshake stop at Canopy San Luis gave us all the first feeding station of the trip but we declined the zip wire options... It was Tanagertastic with many Silver-throated, Blue-grey and Palm visiting the banana bar along with gleaming Emeralds, black and red Passerini's and Crimson Collared, Golden Hooded, Bay Headed and my first Speckled which were a delight to see. 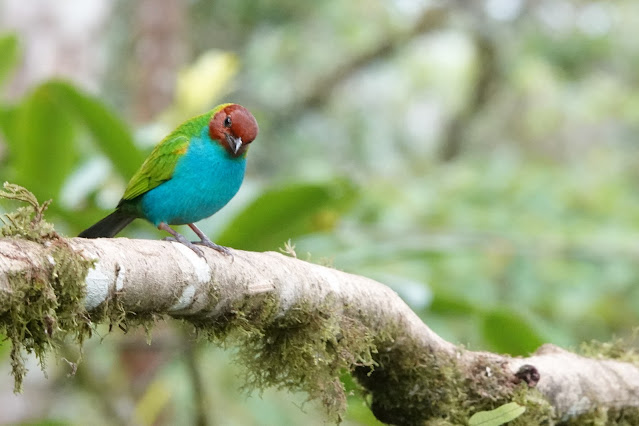 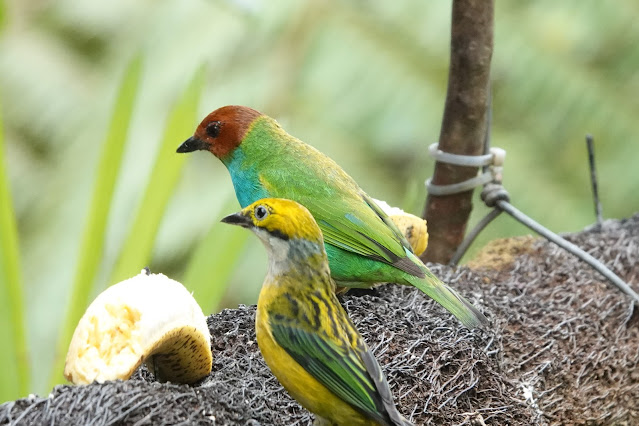 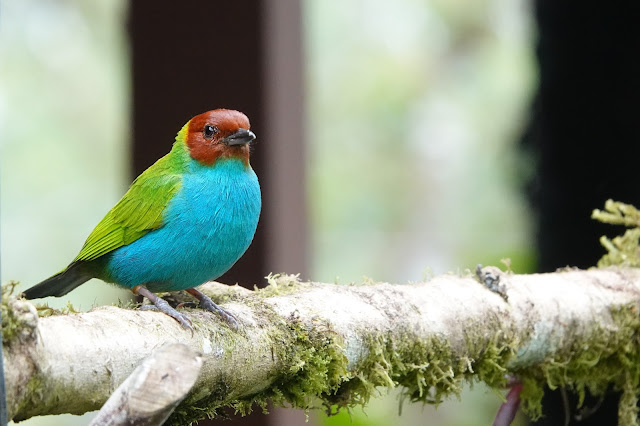 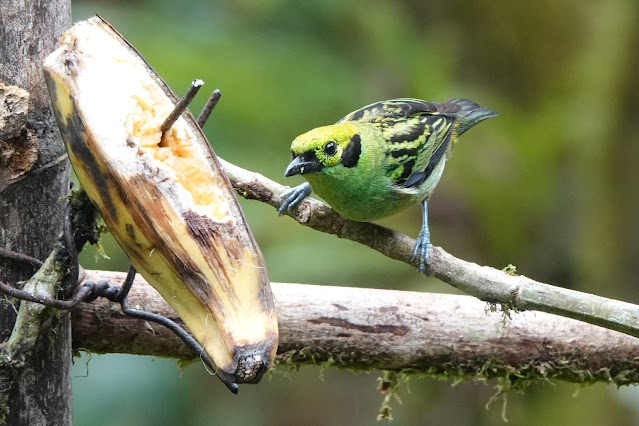 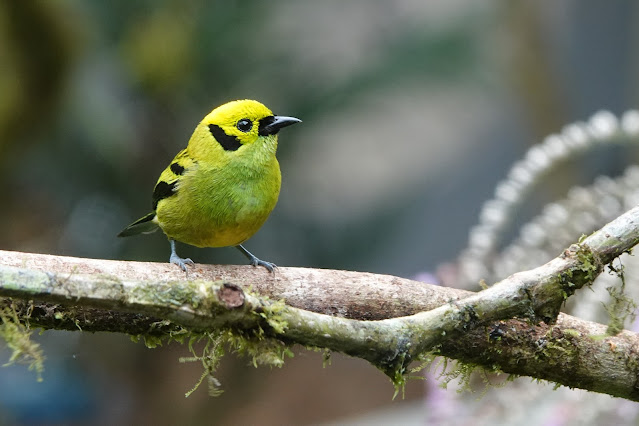 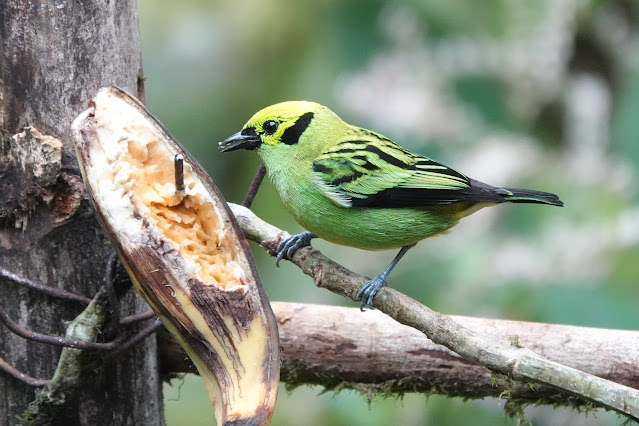 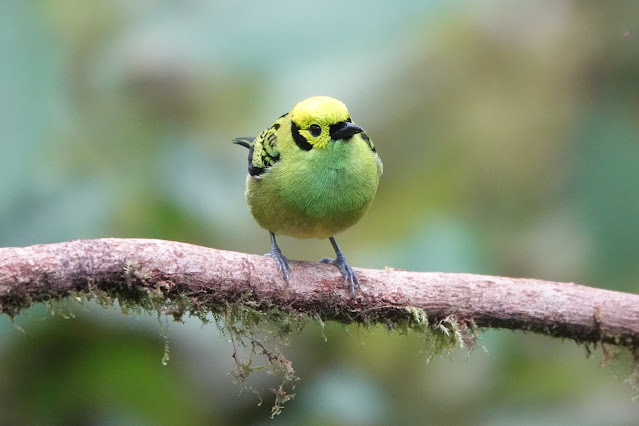 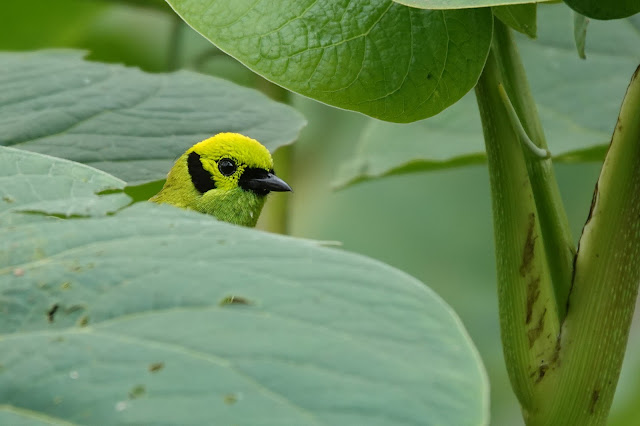 A chunky Blue & Gold Tanager moved through the canopy but did not come down and was a real bonus and Tawny-capped Euphonias, Common Chlorospingus, Black-cheeked Woodpeckers, Baltimore Orioles, Clay-coloured Thrushes and Green Honeycreepers joined in the fruit feast.

A male Green Thorntail and Rufous-tailed, Green Hermit and Crowned Woodnymph Hummingbirds were seen around the Verbena and up in the canopy there were wood-warblers with Yellow, Tennessee, Chestnut-sided and vibrant Tropical Parula.  Even just two weeks later than my first visit it was already obvious that the warblers were further advanced into summer plumages. 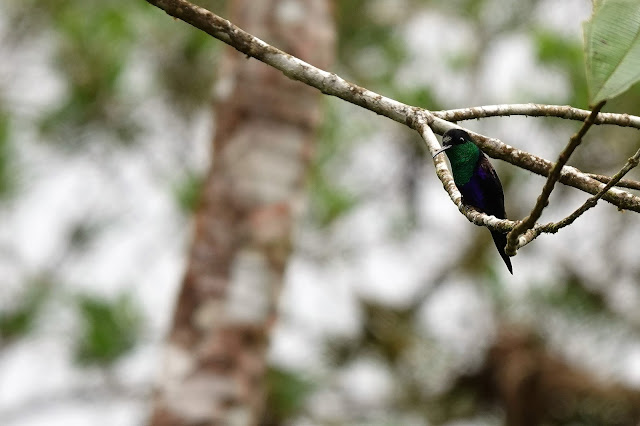 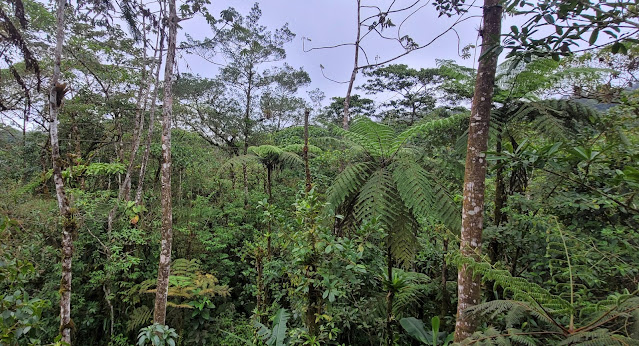 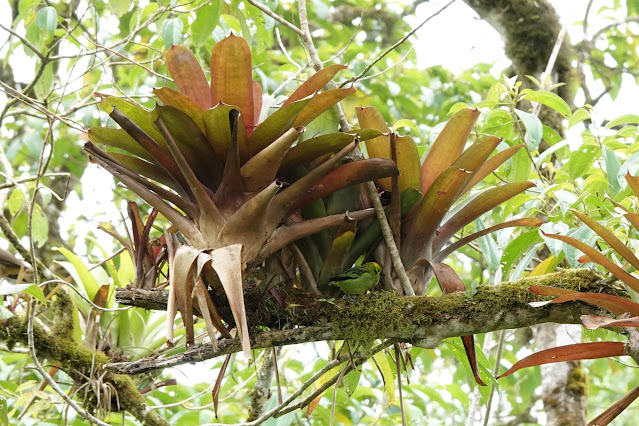 When on a balcony feeding station it is always worth looking over the edge to the ground below where Wood Thrushes and Grey Breasted Wood-wrens foraged and a pair of Chestnut-capped Brush-finches tossed through the leaf litter.  The strong but sad song of Black-headed Nightingale-thrush could be heard and one male came close to the café and even perched up on a branch and sang in view for a few moments. The first Coatimundi was poking around under the building.

Two Black-headed Saltators moved through the canopy and a pair of dinky Smoky-brown Woodpeckers came in and actually posed quite nicely for a change.  Usually I have only seen them briefly or up in the canopy.  There was one last treat in store with a flash of dark blue and white drawing us to a male Slate-throated Whitestart that was flicking around the lower paths although it seldom stayed still for more than a second or two.


Back outside to the bus where Blue & White Swallows were nesting under the café eaves and two Swallow-tailed Kites circled down in the valley.

North again with the mighty Arenal volcano looming up and into the cloud on our left hand side for many miles.  Red-winged Blackbirds were added along with the already now familiar roadside Flycatchers and then once through La Fortuna with its myriad of tourist lures we turned onto the Arenal Observatory Lodge road and started to climb back up.  A Southern Lapwing strode around a mown verge and a Little Blue Heron stop also added buff rumped Southern Rough Winged Swallows. An immature Gray Hawk on the wires required closer scrutiny to confirm the identification and a stop at one of the river crossings saw a Fasciated Tiger-heron in exactly the same spot as 2020 with Black Phoebe and Louisiana Waterthrushes for waterside company.  There were more butterflies on the wing that we saw all of last time.


At Arenal OL  we had some time before we could check in so it was straight into lunch while trying not to watch to much out of the windows around the feeders. Food consumed and straight outside for a session overlooking the gardens and expansive views with only an almost black Red-tailed Hawk distracting proceedings.

Montezuma Oropendolas (Montys from now on) were in on the replenished fruit with a couple each of Crested Guan and Grey-headed Chachalaca in for the frenzy. 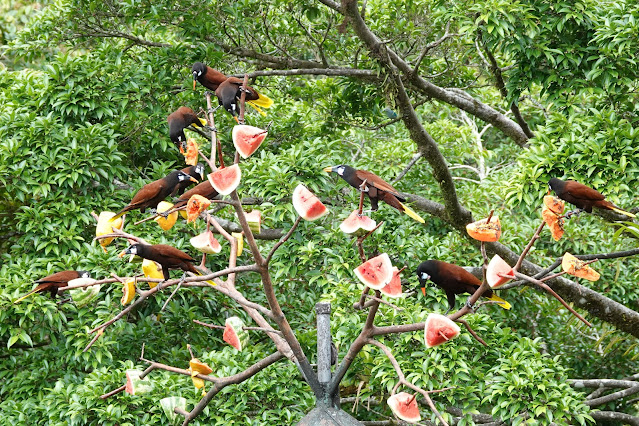 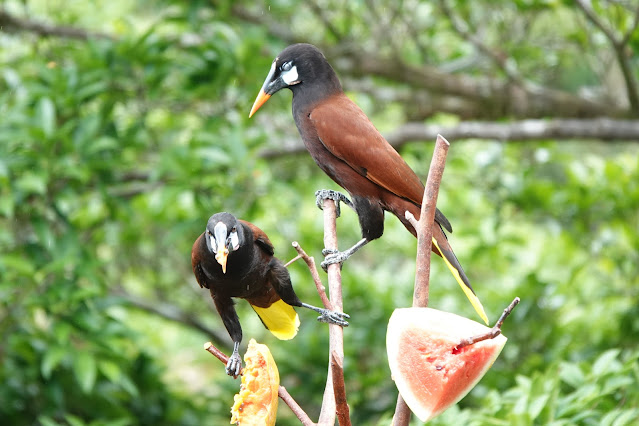 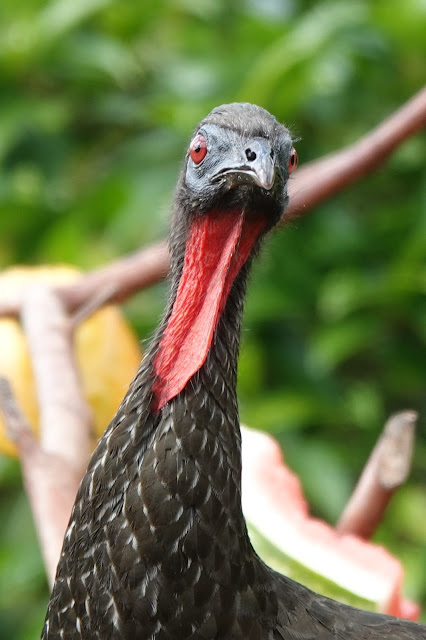 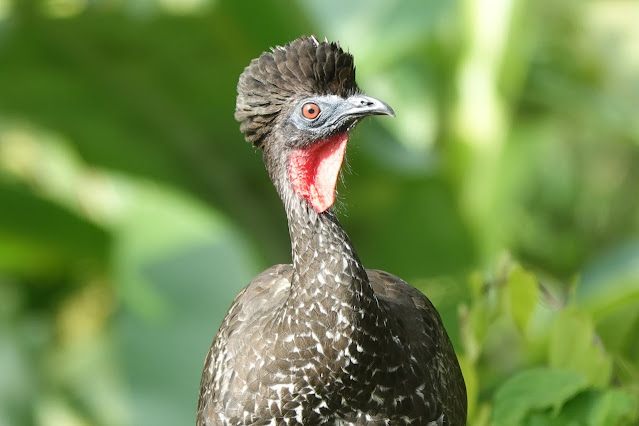 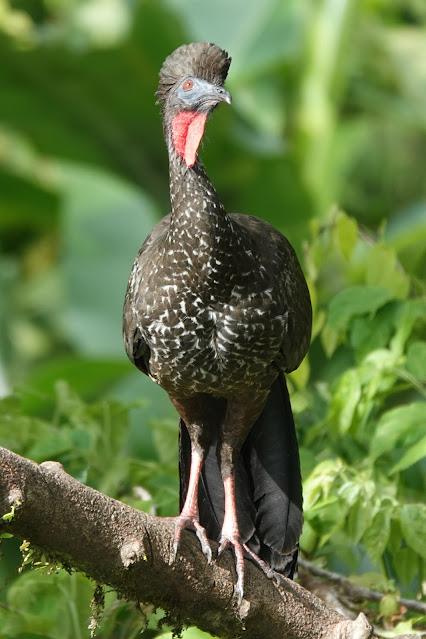 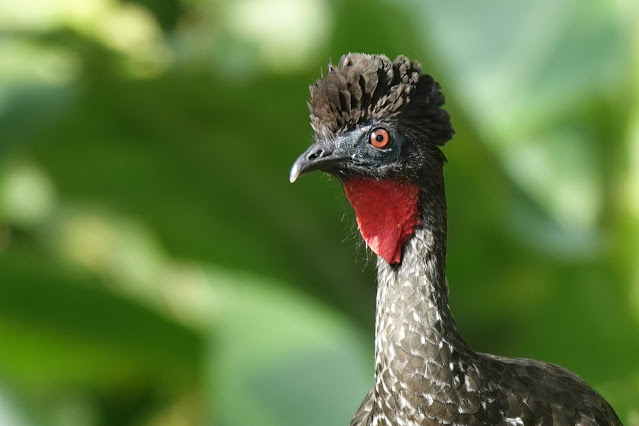 A similar collection of Tanagers to San Luis were dropping in but there were two special additions with two female Black & Yellows and a single Rufous-winged – both of which should not really be at Arenal and both of which were new.  The latter looked like a slightly different Bay-headed. The Scarlet Rumped up here are still Passerini’s. Scarlet-thighed and Blue Dacnis were feeding in a fruiting tree along with Buff-throated Saltators, Black-cheeked Woodpeckers and both Red-legged and Green Honeycreepers.  It was as magical and bedazzling as I remember it.

Brown Jays came in after the other ‘big birds’ had largely vacated and Red-lored and White-crowned Parrots moved across the valley and on the Verbena below there were Crowned Woodnymph, Rufous-tailed, Violet-headed, White-necked Jacobin and Green Hermit Hummers along with some splendid looking butterflies.


We eventually checked in and Dad and I ended up in one of the further lodges up near the waterfall trail.  It had a magnificent view of the grounds and volcano and an immature Black-crested Coquette was a fine way to greet us just outside the window.

A basic unpack and freshen up and then a walk back towards the bridge to meet the others but this even quickly added more species with singing Scaly-breasted HBs that I remembered sounding like an odd Reed Bunting, two each of Cinnamon Becard and Black-cowled Oriole, chattering Band-backed Wrens and Grey Capped Flycatchers and all with the back drop of singing Toucans and of the Montys in their pendulous nests in the tallest Eucalypts.

The path took us down through the lower gardens and onto the pretty dark upper trail and although we picked up Orange-bellied and Slaty-tailed Trogons, Short-billed Pigeons (‘who cooks for you?’), Rufous Antshrike and both Yellow-throated and Keel-billed Toucans, it was fairly quiet so we popped back up into the gardens where more birds were on offer.  A mixed flock added our first startling male Black & Yellow Tanager along with a few of the same Warblers encountered earlier in the day along with a couple of Common Tody Flycatchers.


Grey-breasted Wood-wrens and Bright-rumped Attila  (‘did it – did it – did it – did not’) could be heard singing in the forest and a Streaked Flycatcher perched up briefly.  The managed gardens added a few grovelling Variable Seed-eaters and Yellow-faced Grassquits along with Rufous-collared Sparrows and family packs of Coatis were busy rotovating the lawns but the Coquette was not around by the time we got back up towards our rooms until most people left to head back of course when an adult male appeared and fluttered about in the fading light. 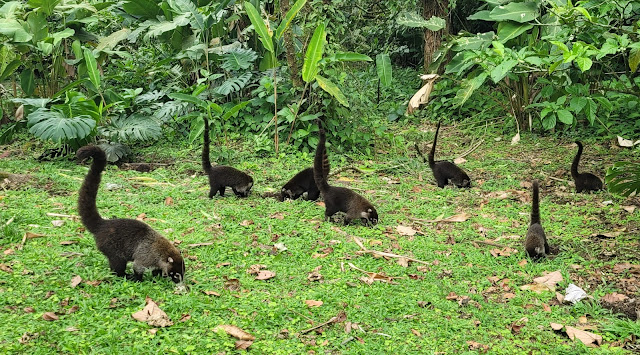 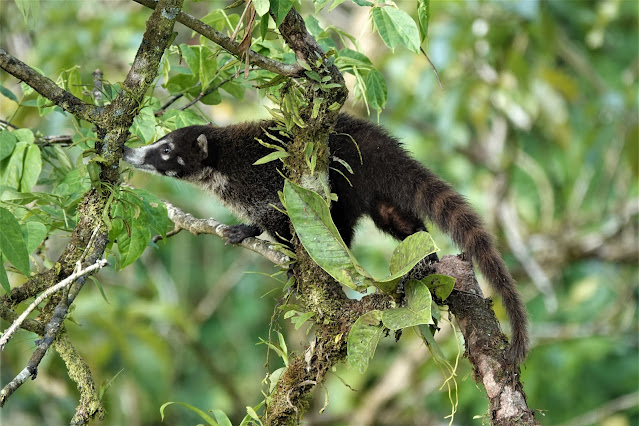 Dusk fell to the ever increasing whine of cicadas and the strange calls of the Guans and Montys as they headed off to their respective beds and the eerie drifting lights of Fireflies flicking on and off as they weaved slowly across the gardens.

Steve set up his moth light alongside our room but it was a tad windy and attracted little but the shadows on the sheet of those inside the trap gave the impression of Bees and Moths the size of cats waiting to be released!  A House Wren roosted up in a crevice above the trap and I found a large Click Beetle that showed two spots of bio-luminescence on the scutellum. The brightness was amazing but probably unhelpful given the number of woofing House Geckos lurking around the rooms! 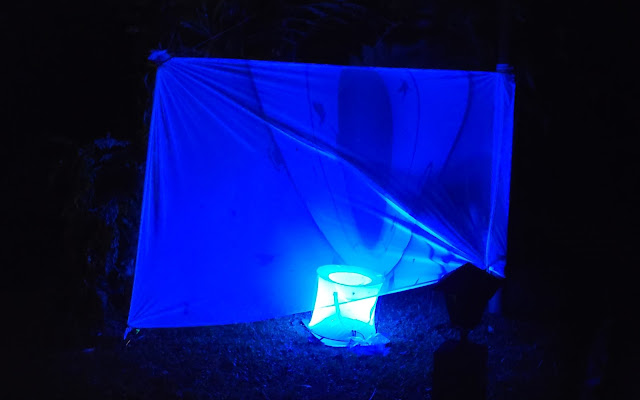 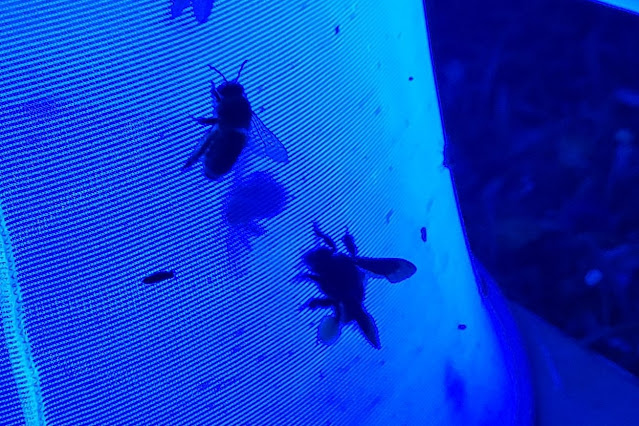 Sleep came easy after a multi-coloured tropical start to this latest adventure. It felt like the first day all over again but with the added confidence that I had at least a better idea of what I was seeing and hearing this time.

Posted by Howard Vaughan at 19:24 No comments: