After a trouble free pre-dawn flight out of Gatwick (although closing the M23-M25 junction with no warning was inconsiderate) we touched down in Palma at a little after 9am and were soon on the road out of the city, heading north to our villa, Ca Ne Neus, a little south of Pollenca.


It took no time at all and we were accompanied along the main road by Red Kites with 14 seen along with a few verge loving Cattle Egrets.


Our little villa was superb and set in small field farmland with a mosaic of grazing, fallow, citrus and olive groves. We decanted and put the kettle on while checking out the garden inhabitants. A pair of Thekla Larks chatted to each other from the fence line with little snatches of melodic song while Corn Buntings dropped in to join the Meadow Pipits foraging beneath the Olives with White Wagtails, House Sparrows, Serins, Greenfinches, Chaffinches and Goldfinches. A Stonechat sung from the roof and Sardinian Warblers scolded each other and us from the bushes.

Little flocks of spotty Starlings whizzed through and Blackbirds and Black Redstarts were also seen while a pair of Booted Eagles soared not too far above.


We needed supplies and headed towards town and Lidls to pick up something for dinner, lunches and breakfast and even here we enjoyed wonderful views of an intermediate Booted Eagle while packing the car.

On to Port de Pollenca for a circular amble around the trail of the Gola reserve in the middle of the town.  A derlict car in the car park had obviously had someone living in it and Annie commented that it looked like someone had died in it... little did we know...

Chiffchaffs, Blackcaps, Robins and Sardinian Warblers flicked before us and Black Redstarts and Stonechats were dotted about. Grey and White Wagtails were on the little patch of saltmarsh along with Common Sandpiper and Cattle Egrets and Woodpigeons burst from the trees.

The lady in the visitors centre was incredibly helpful with details of where to go and what to look for especially with my targets in mind but suggested that we avoid the mountain roads before Monday as everyone would be going up to look at the snow that had fallen...

We completed our circuit with Audouin’s Gulls and Shag from the deserted sandy beach before heading down the coast to l’Albufereta to check out the smaller of the two most popular wetlands on the island.  It was a little parky but the tower hide gave us good scope views of the marsh which held 20 Flamingos and a good smattering of the usual dabbling ducks, Coots, Moorhens, Little Grebes, two Great White Egrets, three Little Egrets, two Grey Herons and an Osprey perched on a distant post.


Following the road around the west side of the marsh gave better views of the Osprey along with three more Booted Eagles and two Marsh Harriers. Kestrels seem to be very common. Sixty Crag Martins hawked around us and four Hoopoes bounded across a field after one another. 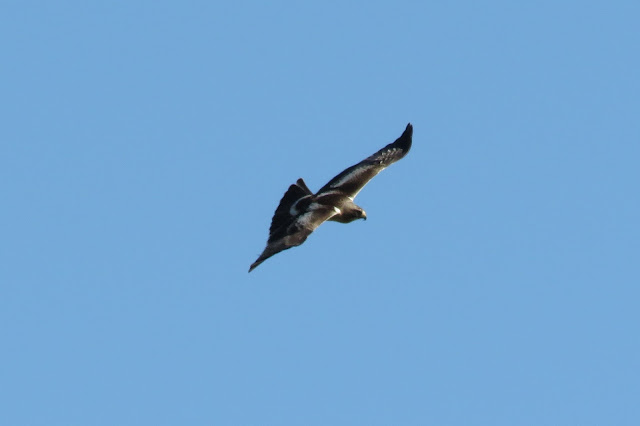 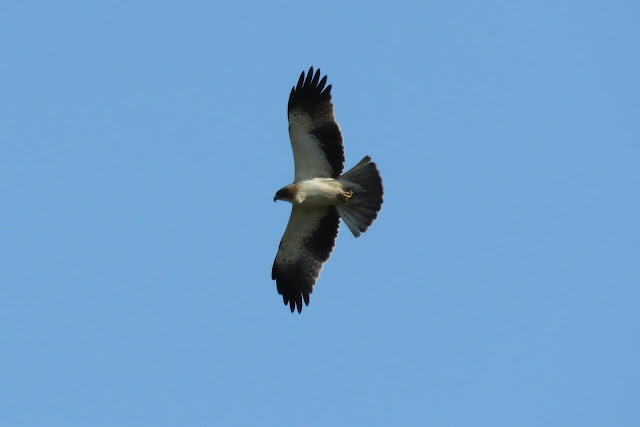 Back to base where the ladies decided to lounge while Barry and I walked back down the road to check out the Torrent del Jordi which we had seen from the car earlier. 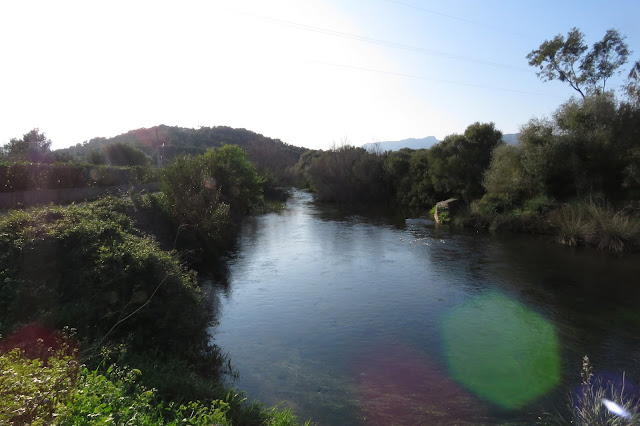 This crystal clear river gurgles merrily through the limestone karst and provided ample rocks for Common Sandpipers to bob around on along with a solitary Green and a host of insect catching Chiffchaffs and Robins. Blackcaps and Song Thrushes sang and you could picture interesting herons and crakes in a few weeks time along with shrikes in the fields and Bee-eaters overhead.

Some spring flowers were emerging including Vinca, Asphadol, Three Cornered Leek and various Arums and their allies.

We heard several Fan-tailed Warblers and a nice male Sardinian gave himself up.  With the sun setting and the temperature dropping quickly from an already chilly 12c we headed back for a relaxed evening where as expected Stone Curlews sang to each other as darkness fell.

Things not to do when you have stinking manflu or similar...

Needless to say I did my usual ‘I’ll be alright!’ thing and carried on regardless and as such let’s just say that the Dungeness visit yesterday only lasted to lunchtime and I was back home and in bed by half one.
That’s not to say that we did not have an ornithologically interesting few hours although the weather was foul with light persistent rain throughout. We met at the ARC as usual and sploshed down to the hides where a Great White Egret was lurking just outside. Surprisingly this was actually the only one we saw. 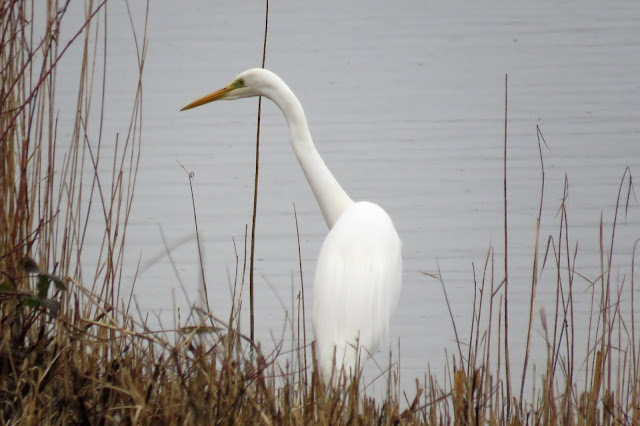 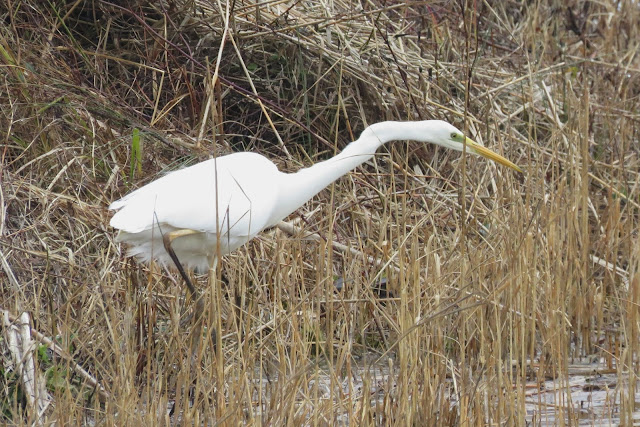 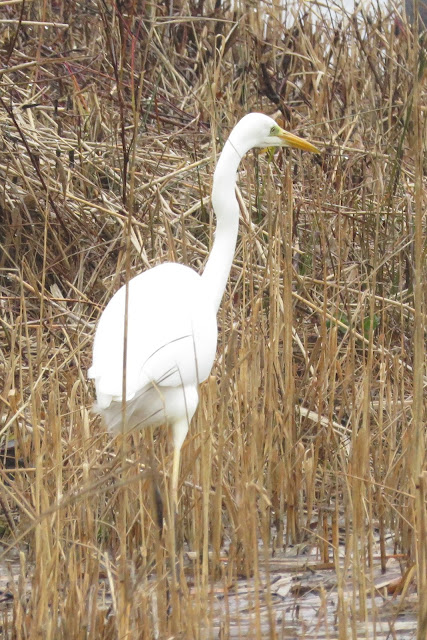 Gadwall and Shoveler predominated and small parties of Goldeneye were engaged in pair bonding with display and mating observed. A Black-throated Diver did a circuit before flying out of view but did not reappear while we waited. 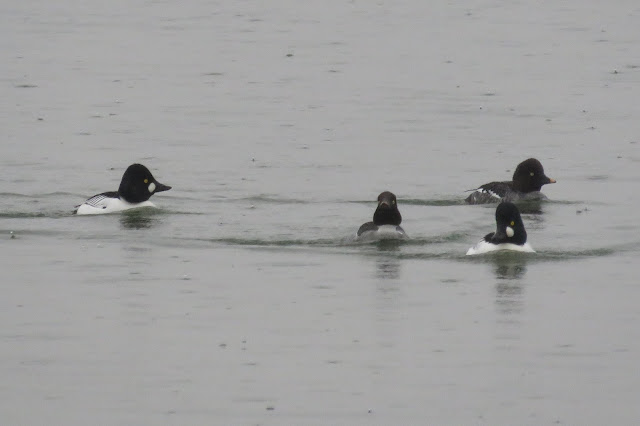 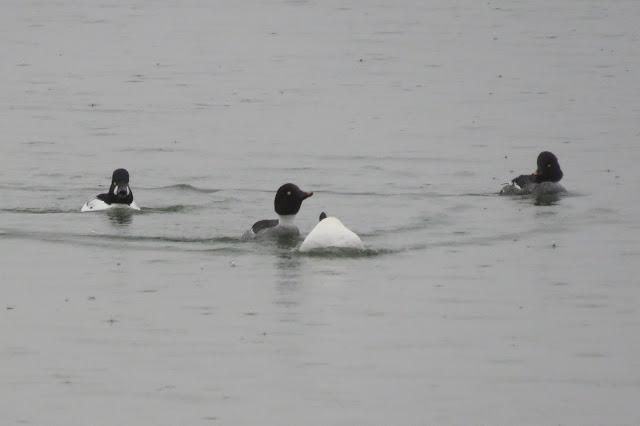 The stars here were the Kingfishers with a pair of very showy birds fishing from just outside the hide. It was a shame that they light was so poor but at least the flash of cobalt and orange brightened up proceedings. 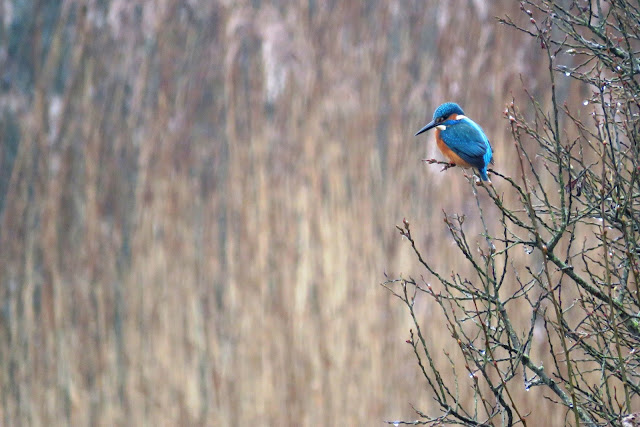 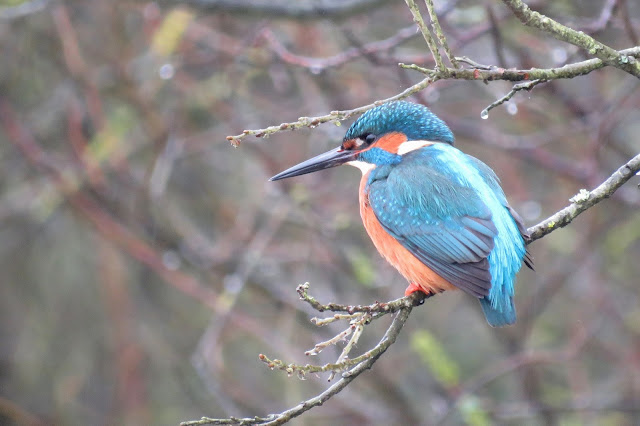 In a brief cessation in the heavy rain we headed for Dungeness Point where Julie found the juvenile Glaucous Gull for us on the beach. This huge Arctic brute showed very well and was a new bird for three of the group so there were smiles all round. 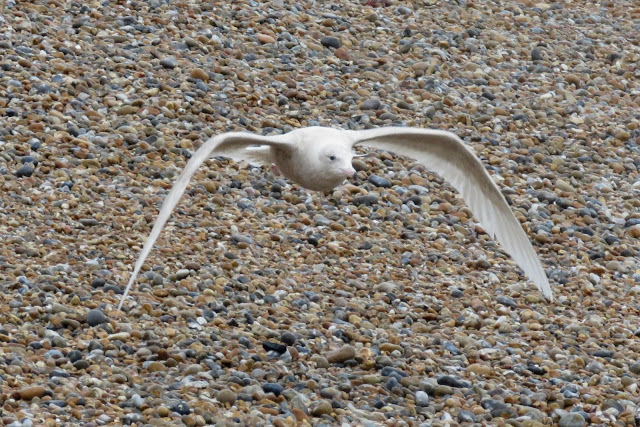 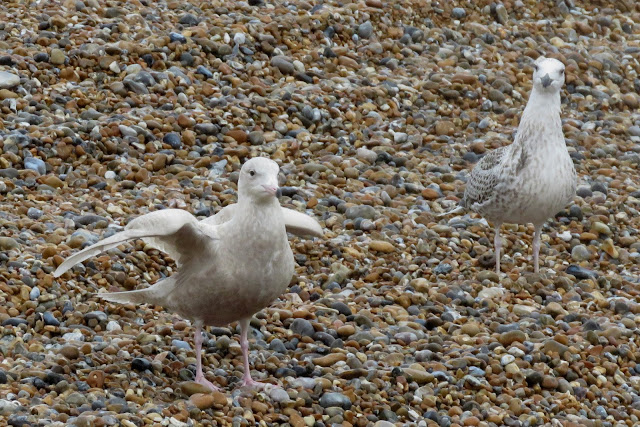 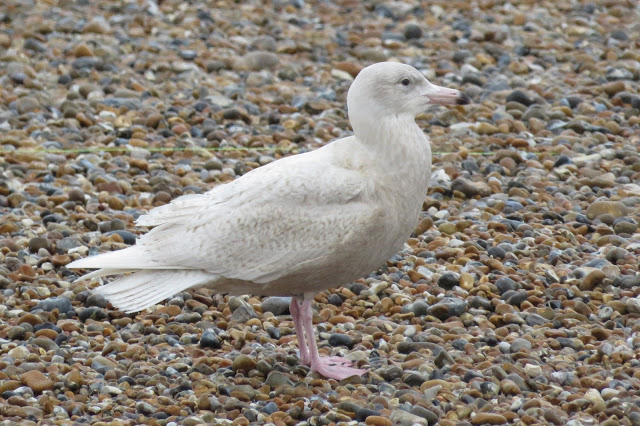 The sea was covered in birds with rafts of Great Crested Grebes and Cormorants diving in unison with packs of Guillemots and Razorbills in varying stages of summer garb a little further out. Red-throated Divers moved west in wavy lines and a second Black-throated Diver was also seen along with a few Kittiwakes and Gannets.
With the rain not letting up we retraced our steps back to the reserve for a short walk to the Makepiece Hide and back.  It was very quiet with no real winter duck of any sort at all with Shoveler being the duck of the day!
I eventually refound the Black-throated Diver and this nice scaly juvenile followed us all the way back to the centre where we could have watched it from the warmth and comfort of the centre without getting wet again...

A quick lunch and followed by apologies and a careful drive home with bleary eyes albeit with two minutes at the front gate to look at a Tree Sparrow... 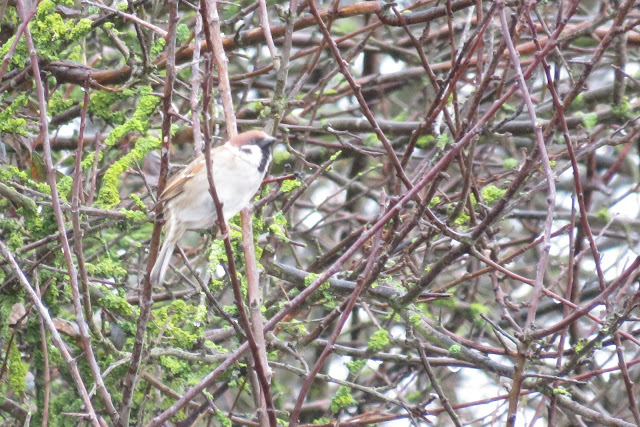 Posted by Howard Vaughan at 14:45 No comments: