An early rise on our last day to catch the sunrise saw us down on the beach looking out over a mirror calm gulf. Five Great Crested and three Black-necked Grebes were easily added to the tally and four Grey Plover dropped into the beach and were our first seen after hearing one two days ago. Bee-eaters ‘pruucked’ overhead and Red-rumped Swallows displayed near the little bridge and played catch with a feather while a posse of 17 Little Terns plunged in to catch tiddlers just a few feet from the car window in a circle of co-ordinated activity. 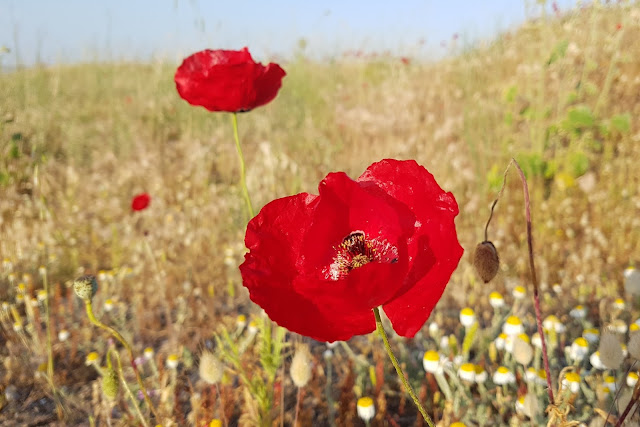 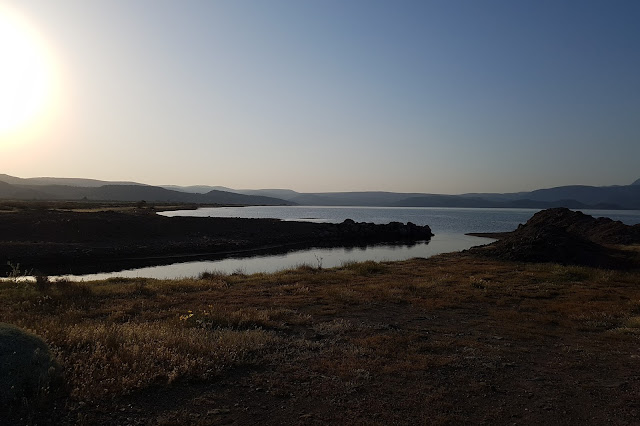 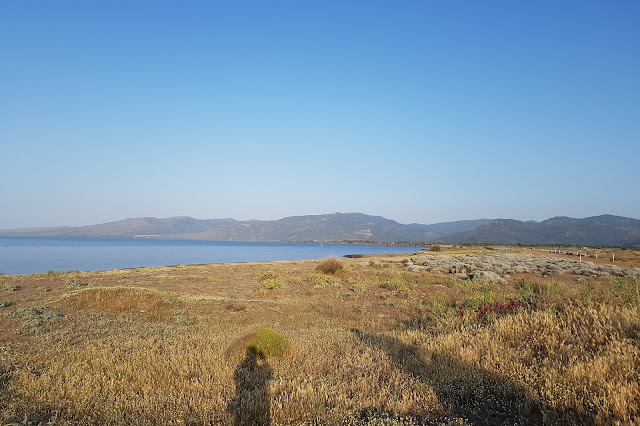 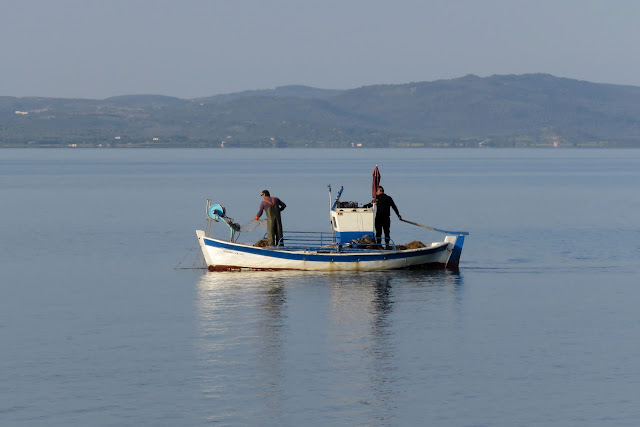 A fine sooty Spotted Redshank was feeding on the rapidly diminishing Alykes Wetlands with the usual array of wadery friends and a Whiskered Tern loafed with two Littles.

Seven glowing Squaccos were at the Lower Ford and the Black Stork, three Ibis, a Grey and two Purple Herons lurked on the now very well vegetated Kalloni Pool on the way back and a Great Reed Warbler gurked away merrily.

A last repast with Thekla before heading back out for a walk along the Tsiknias upstream from the Lower ford where a Whiskered Tern dipped down delicately. It was already incredibly hot and but we persevered and the Nightingales suddenly decided to become showy and we had some fabulous encounters.


Four Little Bitterns were seen and ten Squacco probably included those seen south of the ford earlier. A Greenshank became our 173rd bird for the trip as it ran amongst the Wood Sands. Black and White Storks drifted over along with a few more Bee-eaters.

The Yellow-legged Gulls would periodically descend en masse to have drink and quick bath and Little Egrets and an immature Night Heron joined the Squaccos and both Black-headed Wagtails and Buntings dotted the river banks as a colourful send off. 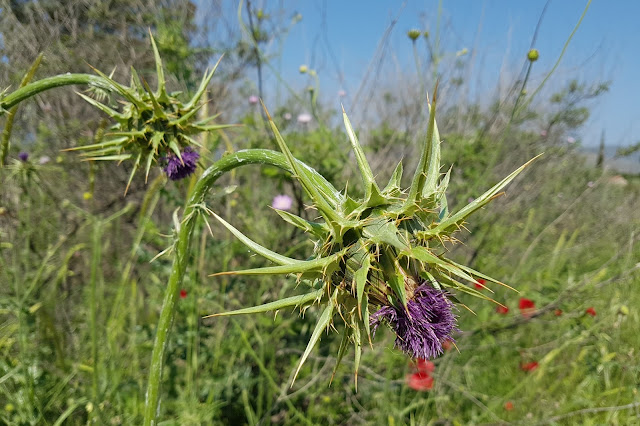 We saved the best for last as just a few seconds after I had suggested that a male Citrine Wagtail would be the proverbial icing when a buzzy wagtail called, et voila a yellow headed beauty landed just in front and proceeded to pose for us...


Sums up this magical island doesn't it?

Back to the Pela for lazy lunch and a last dangle of my legs in the pool and then off we went after bidding our fond farewells to Thekla and her Dad and of course Kratos and his two new tiny playmates.

I safely negotiated Mytilini and within a short time we were boarding our short flight to Athens.  A ringtail Montagu’s Harrier almost got diced by the turbo prop as we landed and the next couple of hours were spent upstairs in an air conditioned lounge awaiting our connecting flight, watching a female Marsh and male Monty quartering the runways with House Martins and a single Kestrel zipping around taking my mainland Greece list to ... four.

Every visit to Lesvos is different but the one constant is the superb warmth and hospitality from those we now firmly call friends. Till the next time...


Posted by Howard Vaughan at 20:40 No comments:

A decidedly civilised day that started along the coast at Skala Vasilikon in the hope that at long last we might catch up with Olive Tree Warbler on one of these trips. Staying longer than the party usually means that I do, but this is Sam’s 5th visit so we put in the effort and got our reward and although the views were not great we did have three birds singing at close quarters and with a bit of patience were able to work out which trees he favoured and eventually get a view down that bright orange gullet! 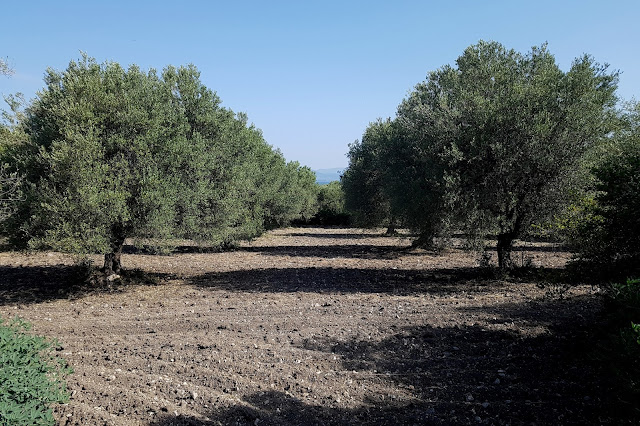 These particular groves were full of birds with at least four pair of Masked Shrikes, Woodchat, Cirl and Black-headed Buntings, Middle Spot Woody, Subalpine, Olivaceous and Orphean Warblers, Blackbirds, Tits and Turtle Doves.  It was magical and the chorus was only occasionally broken by a passing car and the sounds of the family pruning the olives in the adjacent grove. 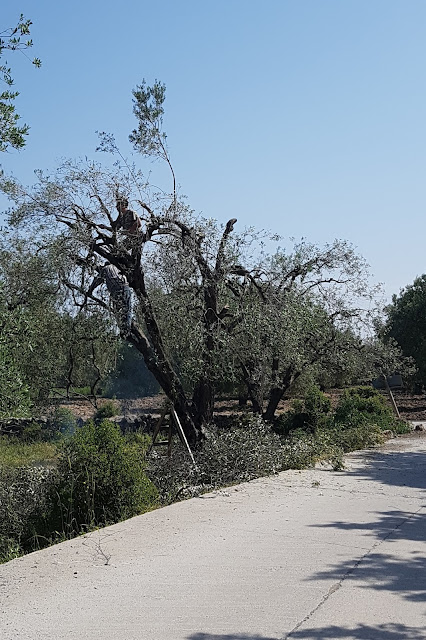 The Alikoudi beach pool was still a little high with no small waders but a fine Glossy Ibis preened in the sun and a Curlew called. the flowers around the edges were superb... 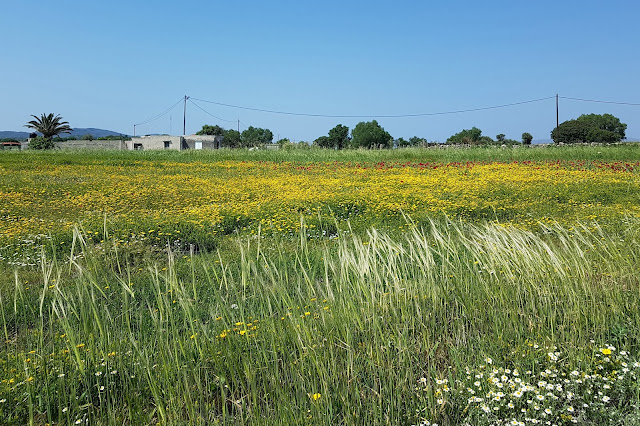 We searched all the wires for a Roller but found nothing but more Buntings and a smart male Red-backed Shrike. The Poly Pans were almost devoid of birds so we retraced our steps and only stopped to rescue two abandoned small puppies that we first saw three days ago but failed to catch. This time a concerted effort saw both safely ensconced in a crate in the back of the van for the journey back to the Pela where Thekla is helping to re-home them in the Netherlands. I think this takes her total to 20 since October. Anyway they are in good hands now.


After depositing the puppies and having lunch we headed back out again and north to Skala Sykamenias so that my party could see this pretty little seaside village and of course evade the Parrot in Kavos cafe and have an ice cream before trundling along the scenic if a little rougher north coast track. 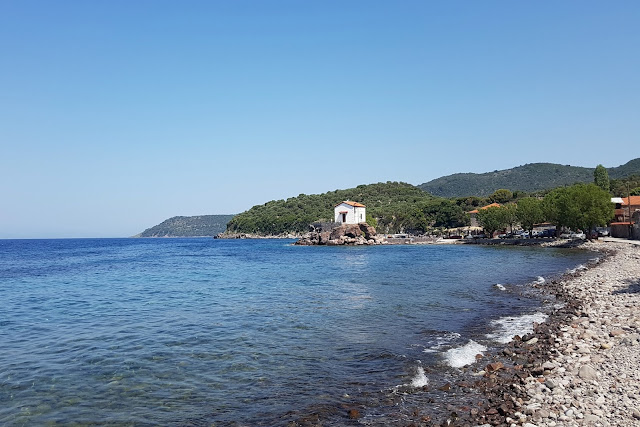 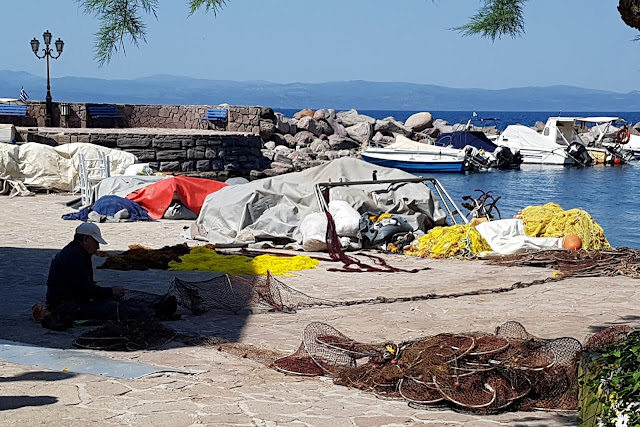 It may have been quiet but the views across to Turkey are superb. The only signs of that the great influx of people took place here now is the boat wreck still on the point and the empty UN welcome camp. Three Yelkouan Shearwaters flapped east but it was otherwise nothing but a pleasant drive.

There was even time at 5pm for the first and last swim of the holiday and whilst rescuing Grasshoppers I heard the Yellow-legged Gulls kicking off and immediately thought big raptor and sure enough an Osprey drifted into view with said Gulls on its tail. Not too bad a bird from the pool!

Off for a last dinner at the Dionysos but there will still be time for a few hours birding tomorrow before heading off to the airport. 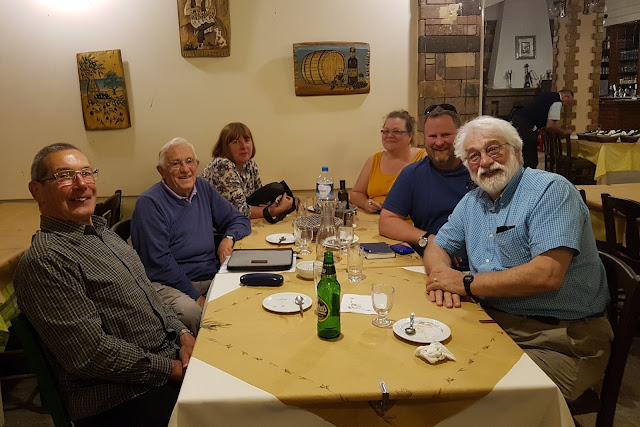 Posted by Howard Vaughan at 19:35 No comments: