With some fair (swealtering) weather reappearing this week, I took the opportunity to escape out onto the reserve for several short walks, mainly with insects in mind although it was nice at last to connect with a Green Sandpiper for the old year list! Normally I get one in January so it was good to finally see that flashing white rump and ‘twit – whit ‘call.

A wander up over Rainham Ridge revealed the first Gatekeepers of the year along with countless Meadow Browns, the two smaller Skippers and a few Red Admirals and Painted Ladies all feeding merrily on the blooms of Mallow, Thistles, Yarrow, Bristly Ox Tongue, Wild Carrot and new one on me, Dittander - Lepidium latifolium while the Perennial Sweet Pea with its shocking pink flowers was being enthusiastically raided by bumblebees of at least four species. 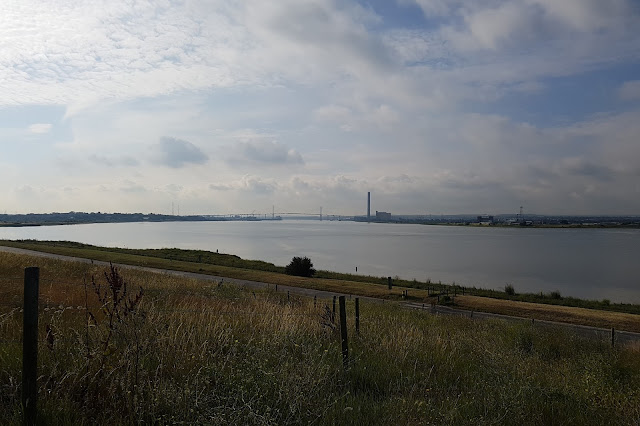 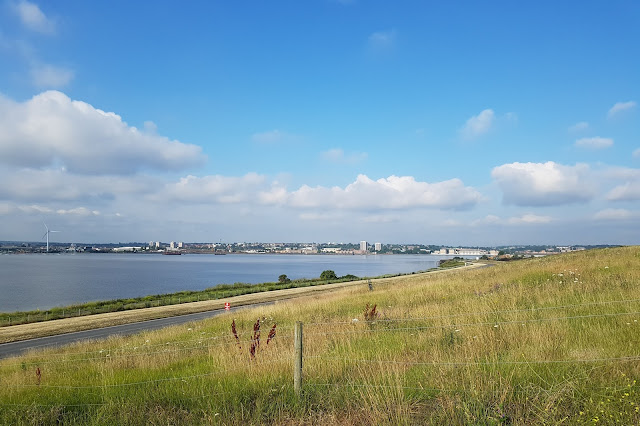 Red Soldier Beetles were similarly gleaning and as usual were often in flagrante delicto. 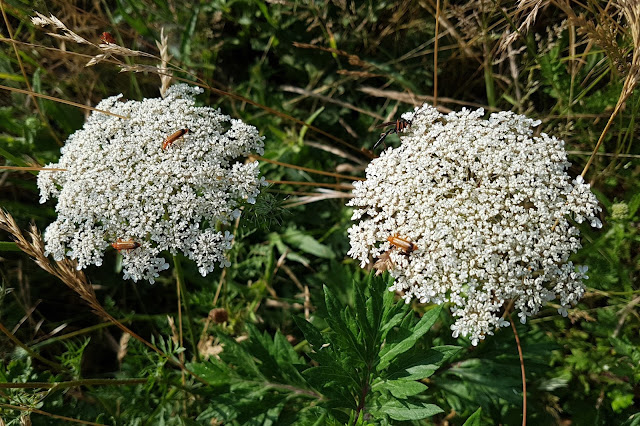 Skylarks were still in song from both perches and the air above my head and Meadow Pipits were collecting food for that all important second brood while flocks of mainly juvenile Starling whirled but did not murmurate – over the tip.

July sees the start of our annual Stock Dove congregation and small groups exploded grouse-like from cover as I ambled along and out on Wennington I counted at least 60 in one flock.

Closer to the visitors centre we have regularly seen Marbled Whites over the last week which is great news and hopefully this small number may see the start of this species colonisation of the site. They are particularly fond of the Black Knapweed but they seldom stay still for long and are a bugger to photograph so I was pleased with this shot.

The first Clouded Yellows and fresh Common Blues, Brown Argus and Six Spot Burnets are making this a very attractive spot but the swathes of Bedstraw and Trefoil are nearly over and it will be the Yarrow, Creeping Thistles and Bristly Ox Tongue that will become popular.

A Six-belted Clearwing moth was vying for a spot against a Wool Carder Bee on the Trefoil and the Honey Bees were making the most of the abundant nectar.

The first Brown Hawker was on the wing on Monday and Southern Hawkers are now patrolling the woodland pathways and picking off smaller aerial prey while down in the grass Wasp Spiders are growing fast and taking on anything silly enough to leap into their strong webs.


The Lavender is covered in bumbles and in the wildlife garden the Wool Carder Bees are firmly on territory while Willoughby's Leaf Cutters are using the bee boxes we put up.  the blooming Chicory at the end of the exit ramp is also attracting the first Hairy Legged Mining bees - Dasypoda hirtipes of the year as they fill up those enormous baskets on the rich white pollen.

Some concerted bee work around the gardens and car park has added Hawksbeard Mining Bee- Andrena fulvago to the list as well as the superbly green-eyed Anthophora bimaculata which zooms around like it has its own built in nitrous oxide button. The latter is pretty scarce while the suitably named Spined Mining Bee – Osmia spinulosa was collecting pollen from the Fleabane with a superb Red Tipped Clearwing - Synanthedon formicaeformis for company. 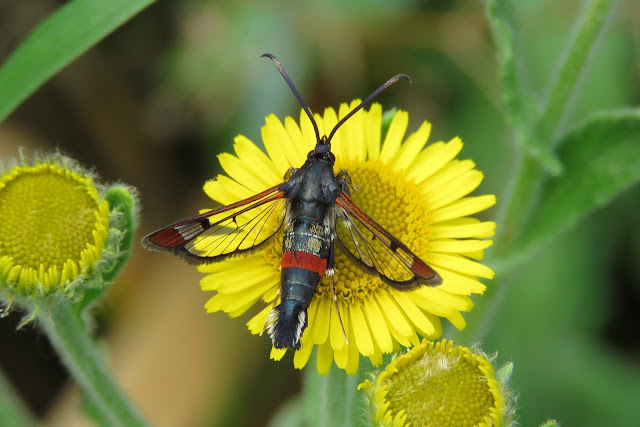 Huge, territorial Volucella zonaria are now taking up their spots in the woodland too and having our biggest – and completely harmless- hoverfly eyeballing you from six inches is quite an experience. At least a dozen other species have been seen including the spotty eyed Eristilinus sepulchralis and incredibly wasp-like Chrysotoxum verralli.

There are many more Episyrphus balteatus around this weekend and I suspect there has been an immigration of this migratory species as I also found my first, and always impressive, Scaeva pyrastri nectaring alongside them and Eupeodes corolla.

There has been an explosion of Peacocks and the buddlias are now home to many flashing eyes as well as Red Admirals and Commas and Oak Eggar Moths are careening around at warp speed.


A White-letter hairstreak was seen on the path on Monday – the first for several years – and I was lucky enough on Friday to see one briefly but our nice patch of sucker English Elms are out of reach to even us to check to see if we have more.

I was going to end on a Gasteruption jaculator but I have already done that gag...

Last year we caught several individuals of a rare and protected fly on the reserve.  The Levels Yellow Horned Horsefly - Hybomitra ciureai - has only been reported once or twice in Essex but I have caught four more since last Saturday so it is obviously doing well.

And before you ask, yes she can bite but on our marsh it only seems to be the Clegs that persistently try to draw human blood...
Just look at those amazing compound eyes!

Posted by Howard Vaughan at 13:11 No comments: