Dungeness - a proper touch of springtime


13th March 2017
It dawned clear and bright with a huge moon sinking down to the west behind the roof tops while my Mistle Thrush was solemnly serenading in the new day from an aerial. It all boded well for a good day to escape to the coast.


With no traffic to speak of we were soon converging on the lighthouse at Dungeness and a pair of Black Redstarts were seen on the rotunda wall from the cars and I was even able to point them out to the other two behind us without even getting out. We parked up and retraced our steps and very soon had both birds back in view but it was not until we had nearly circumnavigated the building that the male gave himself up and showed magnificently.  A second male sang from the coastguard tower. 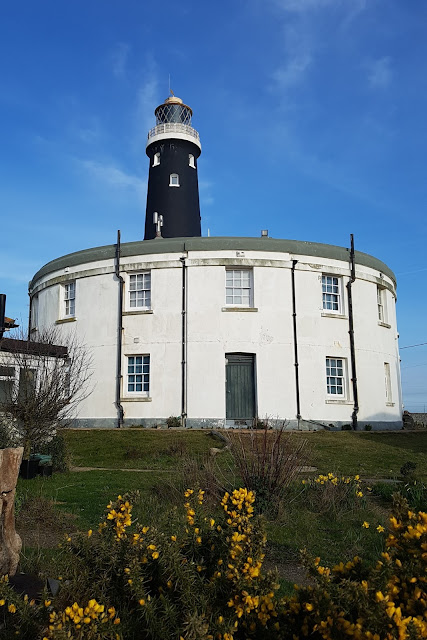 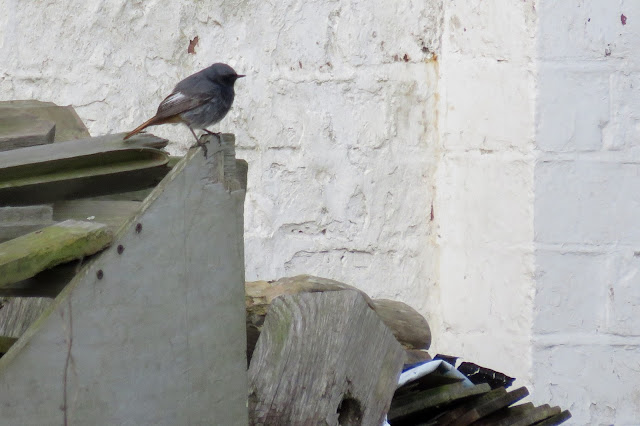 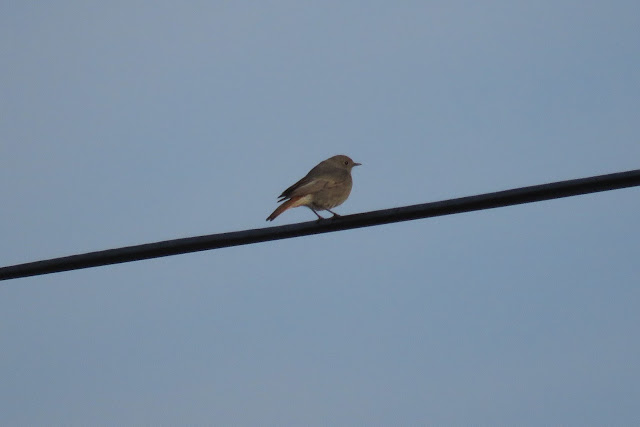 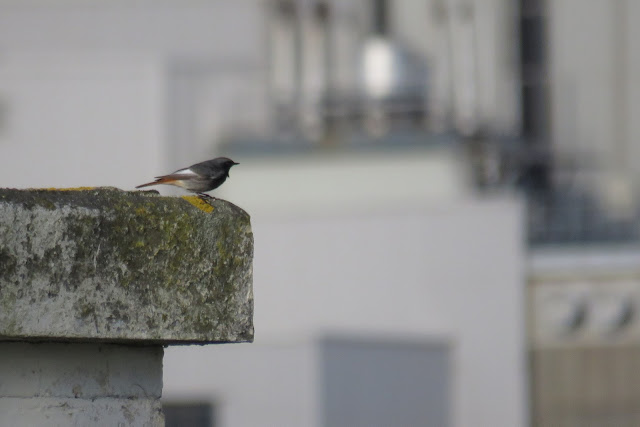 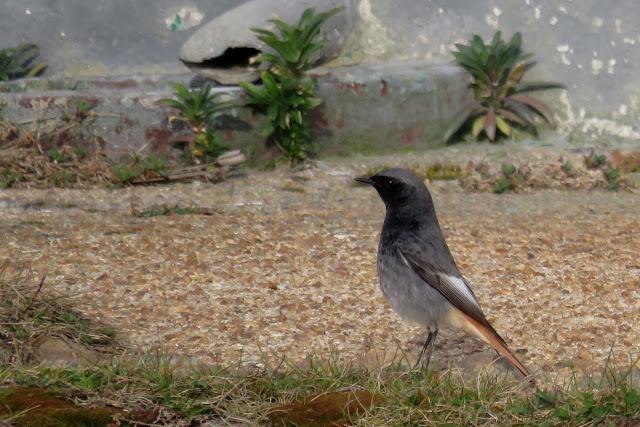 During the entirety of this encounter we were dogged by a cyclist who completed no less than six circuits of the complex and was annoyed on each occasion that we were still stood on the tarmac ‘on a public highway you know’. We even changed position each time just to give him a challenge as he came around the bend... it was all very strange.

Three Chiffchaffs were the only other migrants and Dunnocks, Blackbirds and Blue and Great Tits milled around but there were no Wheatears to be seen. Two Reed Buntings called overhead and Meadow Pipits were in song as we ambled back towards the Power Station where both Pied and Grey Wagtails fed on the sewage treatment tanks.


Down at the Patch is was great to bump into Lee Gregory in his new position at the Bird Obs – ever so slightly different to Fair Isle! News was exchanged and the darker of the two young Iceland Gulls was soon found around the bubbling mass of frothing water. I managed to get the crew onto this pale teal coloured bird as it drifted back and forth through the throng. The second, paler, bird was found dozing on the beach but was largely obscured.

I could not find any Meds or Kittiwakes but a hulking first-winter Caspian Gull arrived and spent some time terrorising the other gulls – a proper pirate. The wings, rump and tail were startlingly contrasting and the white underwings shone while the legs on this one seemed especially long, even in flight! Lee quite probably picked this bird up on call as it came in but despite the number of this species I have now seen I cannot say that I ever knowingly heard one so that particular skill will have to wait a little longer.

The sea was otherwise very quiet with just a handful of Gannets, 2 Scoter, 13 Wigeon and two Great Crested Grebes for our troubles.  A magnificent ship headed west with all its sails unfurled but the light was too harsh for us to see what name it went by. 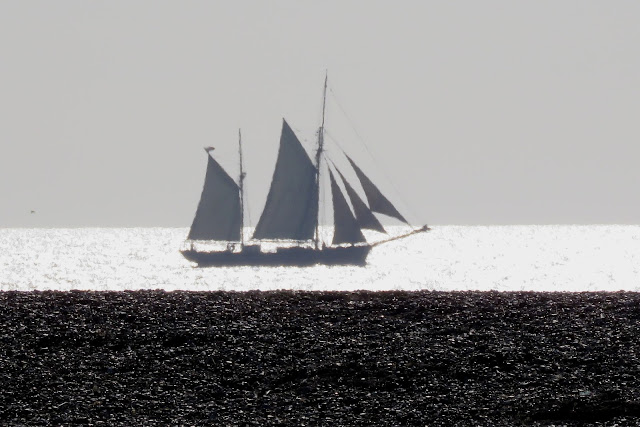 The Black Redstarts had left the garden area and a small party of Chaffinches were now moving through it and out into the coconut scented Gorse where randy Dunnocks were wing flicking, armpit flashing and tail quivering with abandon. One was lacking something in the display routine as he had no tail at all but it did not stop him joining in the fun! 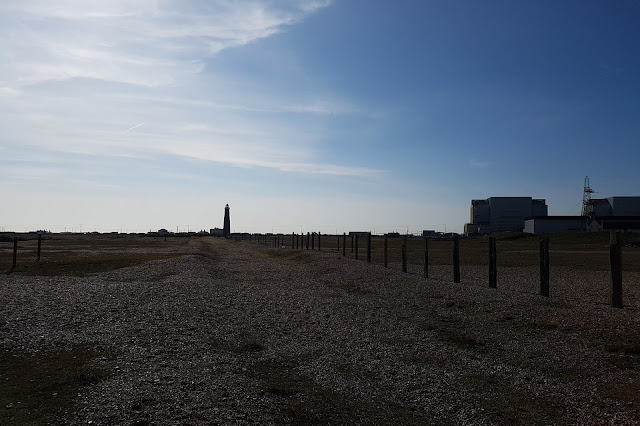 Silken tents in the Gorse were carefully inspected and found to be infested with countless thousands of tiny red Gorse Mites. I had heard of these before but never seen them. Seven Spot Ladybirds were dotted around and a green Gorse Shieldbug was rather unobliging.

A couple of Redwings where lurking loosely with some shaggy throated Starlings and two grey female Black Redstarts took us to five for the morning. Pat and Lee then simultaneously found a Wheatear which I think was a young male. It looked quite brown backed but seemed to have a mask and like a lot of new in migrants it did not longer log and rocketed off with a flash of that white arse but was still worthy of an ‘essence of’ image. 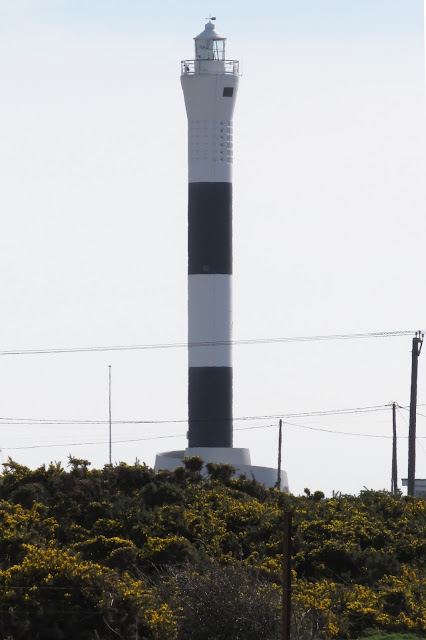 The Moat was only inhabited by tits and Dunnocks so we headed back to the cars and off to the reserve. The Ring-necked Duck was not on Cooks or Tanners Pools by Boulderwall but a female Sparrowhawk did put up our first Great White Egret of the day which promptly walked back into the ditch. There were five Little Egrets around the edges and the Tree Sparrows were good on the feeders along with Greenfinches, Reed Buntings and Chaffinches. A Raven headed silently over and the first Marsh Harrier was spiralling up above.

A huge female Common Toad stopped us in our tracks and was snapped before being assisted to the ditch below where others were already croaking away. I cannot remember the last time I saw one of these? 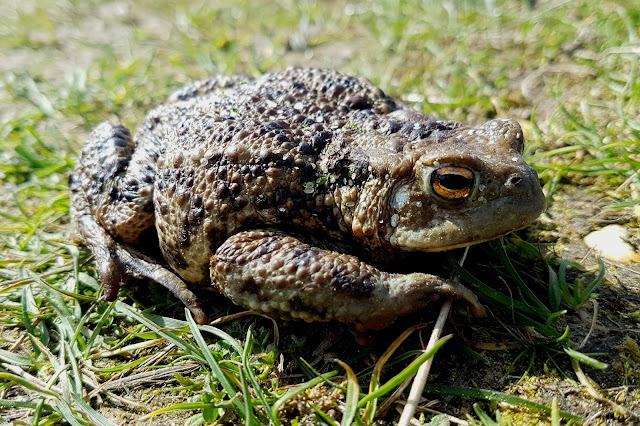 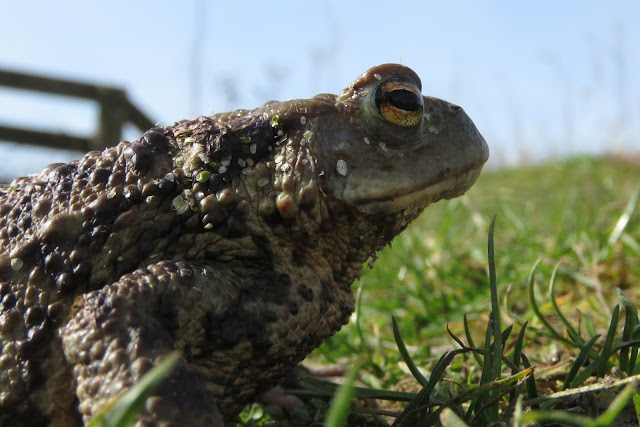 Comfort break and coffee and then off round the trail where the Long-eared Owls once again failed to show for me and a group. A consolatory look from the Firth Hide revealed a creamy white Iceland Gull with the other big gulls which I suspect was our bird from the beach a little earlier. A single Dunlin flew around and two Oystercatchers vociferously communicated in tandem flight. 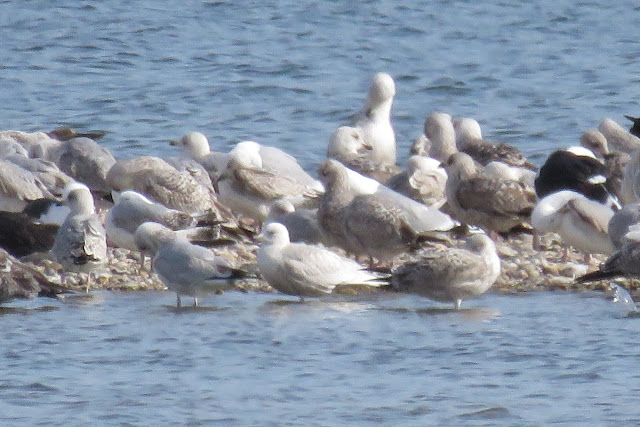 A fine male Smew was seen from Christmas Dell and there were a few Small Tortoiseshells zipping about as well as several large terrestris and lapidarius Queen bumblebees. One of the Ravens made a b-line along the pylons with a bulging crop and returned back about ten minutes later and I suspect that there are mini kronkers clambering around a nest. Pat Hart stayed behind to show a family the Smew and got an very early Swallow as his reward.

Two Great White Egrets were getting stroppy with each other on Denge Marsh and although they both had yellow bills, the legs were turning pale and into breeding condition and the backs were covered in a filigree of wispy aigrettes. There was no sign of the mini Garganey flock of the weekend or the escaped drake Hooded Merganser but the Bearded Tits were invisibly pinging and Cetti’s Warblers were giving it large. Marsh Harriers were somewhat scarce with just a couple more sightings of females and the winter Stock Dove flock was still around in the sunflower fields. 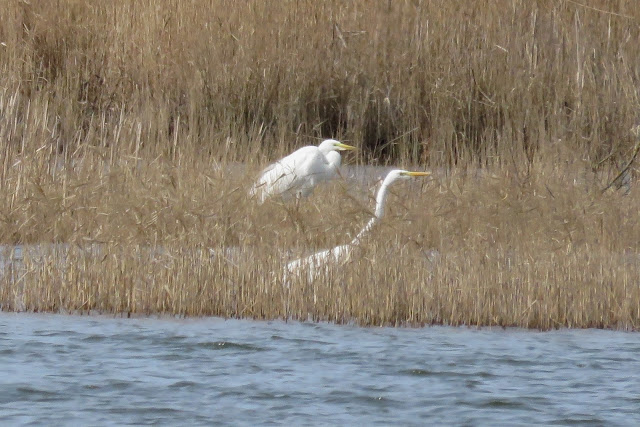 Lunch was taken at our traditional bench in the lovely warm sunshine before a last look for the Ring-necked Duck on the way out and sure enough we picked him up right at the back of Tanners Pool where he looked a very different shape when diving to when just floating around. Two of the Great White Egrets were playing chase me and two Egyptian Geese were with the Greylags.

A stop to check out the New Diggings left me trapped in the car but no so that I could not find two Black-necked Grebes for the others. This pair were in both winter and summer plumage but the light was tricky and we did not persevere to try and find the other four and the Slavonian also present on this pit.

This only left the ARC to amble round and we spent a quiet last hour around the Hanson Hide where Black-headed and Common Gulls were coming down to bathe but alas without the hoped for Med Gull.

Several Goldeneye were definitely paired up and Tufted Ducks were becoming very vocal and looked magnificent reflected in the oily calm water. 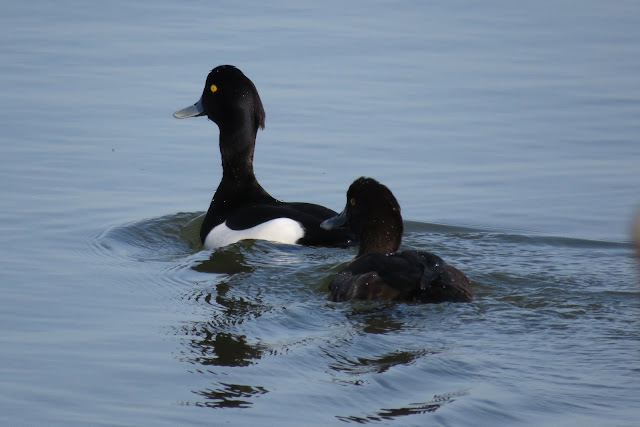 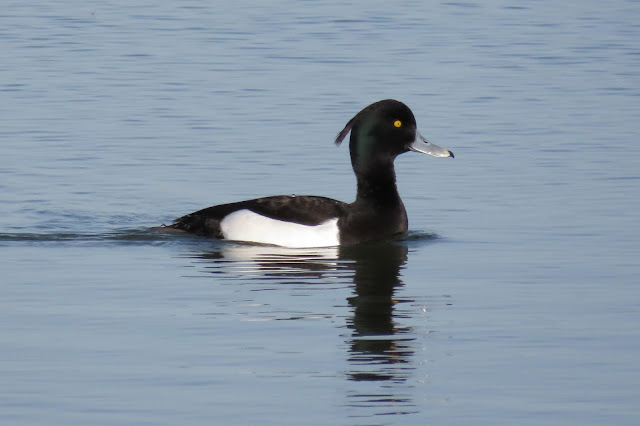 The huge Wigeon flock came in from Denge marsh and I rather sadly counted 668 as they bobbed around mid water. Suddenly there was a big commotion and all the gulls got up. I searched for a large raptor only to discover a Great White Egret on the shingle gull island where it was getting a good trashing from the local Herring Gulls. It did not look impressed in the slightest. 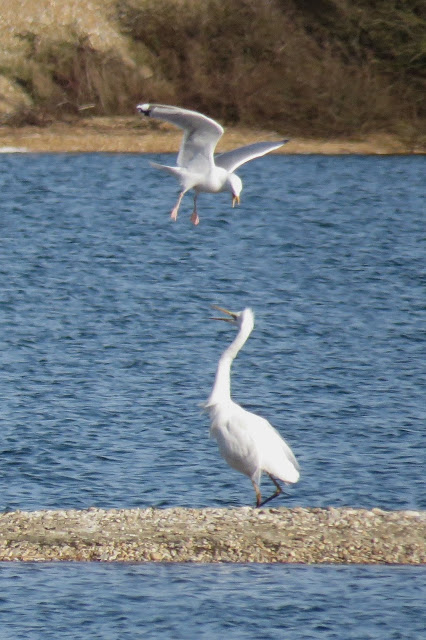 With time getting on we ambled back in the warm sunshine and called it a day. Spring certainly felt like it was upon us today and the floodgates will soon open and the sounds of summer will be all around us once again.
Posted by Howard Vaughan at 22:39 4 comments: