Friday morning saw me leave nice and early from my parents to get a head start on the traffic as I headed north up the M11 and by just before 8am I was at RSPB Fen Drayton to the west of Cambridge.  I had a couple of meetings during the day which would see me trying to get something of an understanding for how crop rotation in conjunction with wild bird seed and herb mixes benefits Turtle Doves and therefore all other seed eating farmland birds that my plots out on Orsett and Bulphan still have in the absence of the TDs. 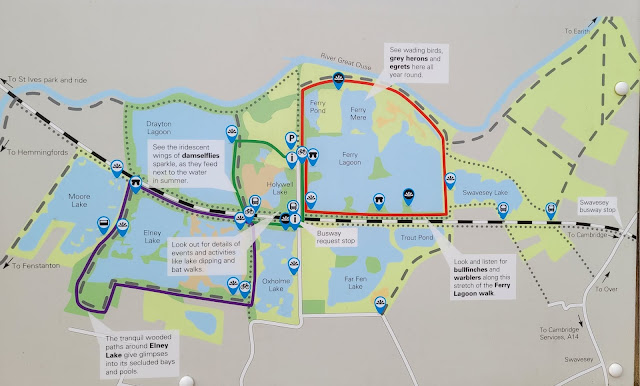 I had two hours to amble around before meeting up with the Warden and others in the car park and so struck out for the Great Ouse that cuts through the top of the site.  It was warmish but not sunny and the hoped for Turtle Doves were likely still asleep or having breakfast somewhere nearby but there was plenty of Warbler song all around including several bubbling Garden Warblers.  These were my first of the spring and I still rank it as one of the best songsters that we have.  Families of Long-tailed and Blue Tits moved through the scrub and Common Terns flew back and forth between the pits in exaggerated bouncy flight while there were several Cuckoos singing at the same time. 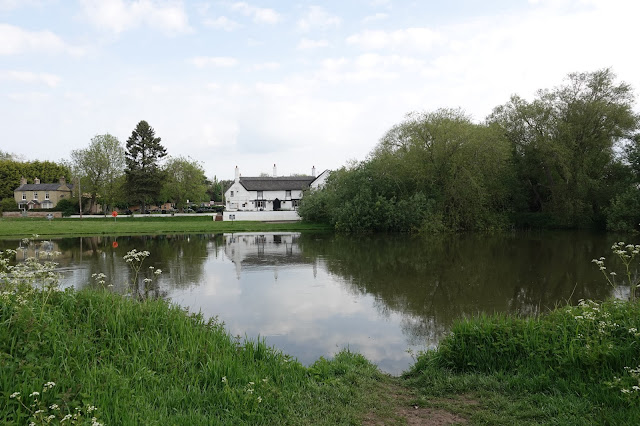 I reached the swiftly moving river but the sun was still not through and my hopes of an Odonata filled stroll were quickly dashed as the my side of the river was also in the shade but all was not lost and as I slowly walked along Banded Demoiselles started to come to life and seek out the warmest exposed spots to fire up the wing muscles for the day ahead.

Black-blue males and shining gold-green females dotted the Nettles and allowed a reasonably close approach before fluttering away. The odd Blue-tail, Azure and Common Blue Damselfly were also seen but most of these were teneral in various dull shades.

Long-jawed Orb Weavers (Tetragnatha sp) were either lounging on leaves with legs extended or already and waiting in slightly angled webs  and several large, brightly coloured Pisaura mirabilis were similarly laying in wait.  Most were quite orange which is a colour form that I do not see at Rainham.

Wolf Spiders scurried at my feet and a Larinioides cornutus was waiting for a bit more sun.  I found a fine Drake Mackeral Mayfly under a leaf and Seven Spot Ladybirds were busy munching Aphids while 16 and 24 Spot Ladybirds were also seen.  There were two species of Click Beetle (only one of which looks like a Click beetle) and Dock Bugs were joined on their favourite plant by rampant pairs of iridescent Green Dock Beetles who where diligently attempting to make more of their kind. 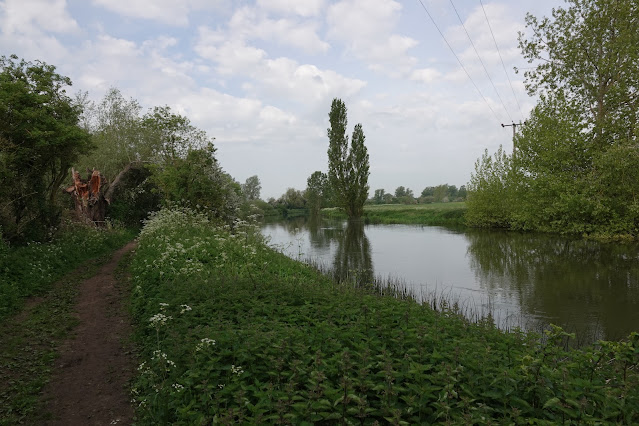 There were a few flies but most were Calliphora and the only Hovers that I found were Helophilus pendulus and Platycheirus albimanus but there were several predatory Empis tessellata waiting on leaves for a passing snack to grab and suck dry but obviously not the Wandering Snails that adorned many a blade of grass.

A Nightingale flicked across the river flashing a long rusty tail and Cetti’s Warbers whirred the other way.  The Nettle beds along the river were huge and felt great for a Marsh Warbler in the coming days.  I was still surrounded by Warblers and Cuckoo song and the distant booming of a Bittern threw me initially as I did not know that they occurred here.

Egyptian Geese joined Greylag and Canada on the list and a pair of Oystercatchers were conducting noisy circuits although I could not see them through the trees. A family of Mute Swans glided by, letting the swift current take the strain. 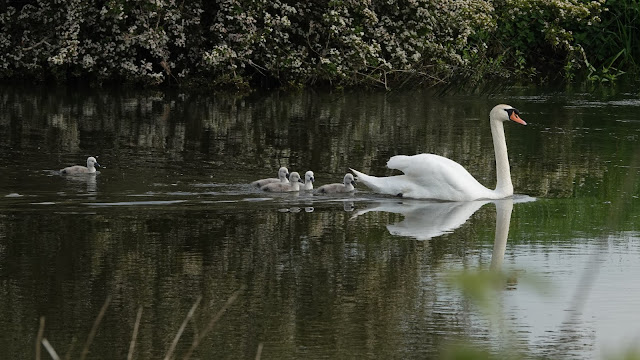 I looped back to the Cambridge Tramway and crossed it after a high speed Double Decker hurtled through and found myself being shouted at by a very excitable Sedge Warbler on a small pond.  I carried on down to a couple of screens that overlooked more lakes where a volunteer told me that the hundred Black-headed Gull nests visible had been over 300 just a few days before when the terrible weather caused the lake to suddenly rise, swamping most of the colony. 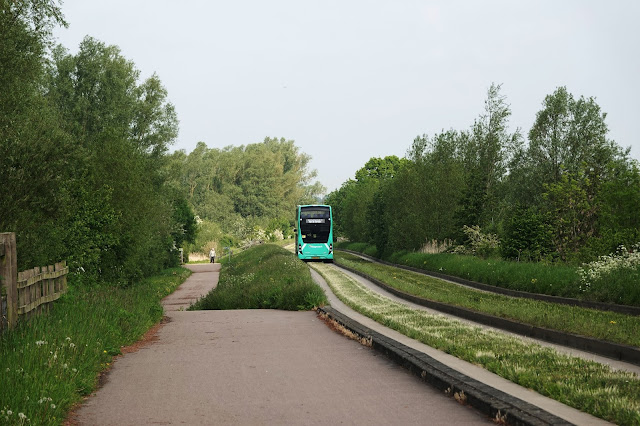 Variable Damselfly was added with several males perching up and a pair of Starlings came out of their best hole to give a pair of Jackdaws some serious grief. With time getting on I came back along the Tranway to the car park with a Nightingale in full song and more Garden Warblers.


We convened at 10am and Simon the Warden took us on a walk to look at the Turtle Dove plots that have been created nearby with a view to provide supplementary feeding.  He said that it is looking like the best season in many years and was visibly relieved when a male started purring from one of its favourite dead trees.  He (the dove that is) was in full puffed up chest mode as he gave it his all and it obviously worked as he suddenly zoomed off before chaperoning a female back to hi favoured trees where the posturing and purring recommenced.  It did not take her long to invite him to follow her down into the bushes underneath. 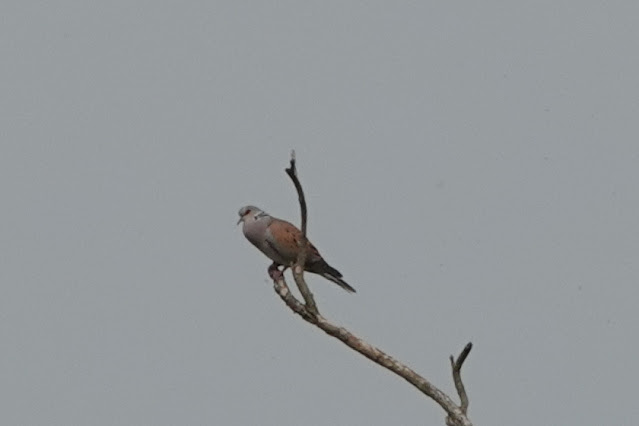 Our small party went to check on where the extra food has been put down and inadvertently found two great inverts with a teneral male Scarce Chaser and a rather dapper little Osmia bicolor which is the one that nests in spent snail shells.

It was great to encounter a Warden so into his other wildlife and there was good banter between the whole team while looking at Nomad Bees, Kentish Snails, Damsels and a smart Xanthogramma pedissequum hoverfly.

Simon is keen on his Beetles so hopefully he can id that vibrant green one that was seen a couple of times up in the herbage rather than on the ground.  Both Pyrochroa serraticornis and Cantharis rustica were dotted around adding splashes of red and Yvonne has indentified an odd bug as an Ant Damsel.

Star find though was a pink, finger lengthed Goat Moth caterpillar that was heading across the path.  This was one of those not seen one before but know what it is moments! What a beast! I cautiously picked it up to avoid the rather large jaws and moved it off the path but at least in the direction that it was heading.

The sun was now coming trough and the temperature was rising and I could happily have spent all day engaged in quality grubbing around this wondrously lush reserve but we had a lunchtime appointment down the road at the RSPB’s impressive Hope Farm where we have set about understanding what a successful, commercial and yet wildlife friendly farm can look like.  It was just a few miles back south of the A14 but in a very different landscape of rolling arable fields and thick well maintained hedges.

The next few hours were spent exploring the Turtle Dove experimental seed plots, having a lunch amongst the flowers, Skylarks and Yellowhammers and then being shown around by Georgie the Site Manager to give us an idea of how things work.  It was all new to me but I think I now have a better idea of how things may be applied on ‘my’ farms if and when I get to visit them.  The field margins were full of life and the edge of each boundary had a vibrant lime green-yellow strip of Crosswort – a type of Bedstraw that I think I fund on one of my walks last year.  There were Orange Tips, Brimstones and Whites and plenty of Pardosa and Xysticus Spiders to be seen along with a lots of micro moths that required far more time but Mark N got a nice shot of Grapholita compositella which looked strangely white in flight.  THree Silver-Y moths were my first of the year. 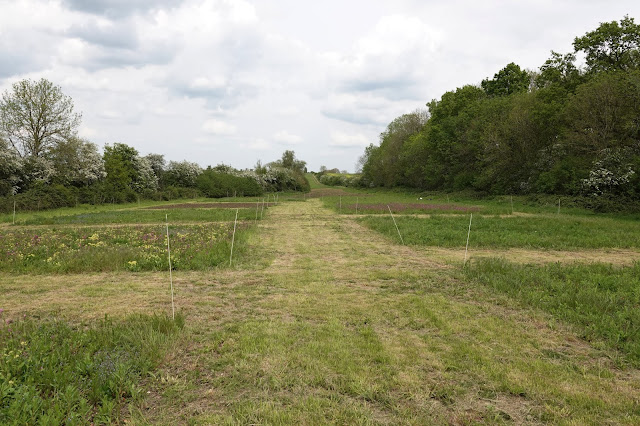 We encountered Brown Hares and Rabbits and a Fox watched us cautiously from within a thick grass verge while a Muntjac trotted away up a farm track.  Rooks foraged in a Barley field (where I now know what the dreaded Black Grass looks like) and the left strip in the same field held nesting Lapwings.  There were Yellowhammers singing and calling from every hedgeline and Reed Buntings and Linnets were heard too. 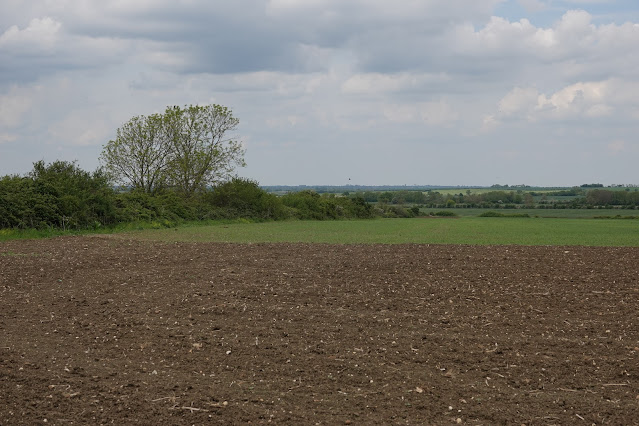 And way up in the misty blue a twin seater Spitfire spun, twisted and roared and distracted us from paying quite as much attention to Georgie and her obvious love of the farm as we quite should have – sorry! 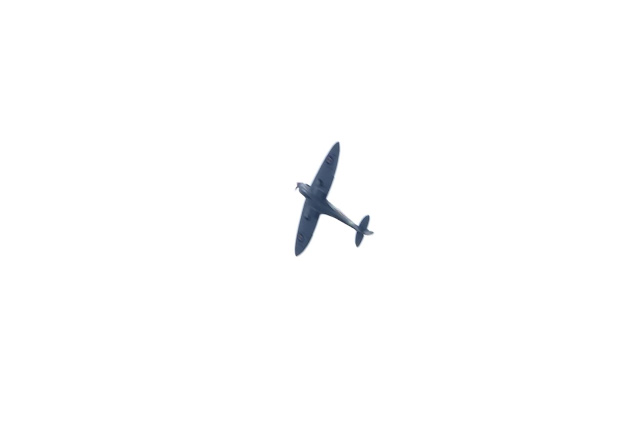 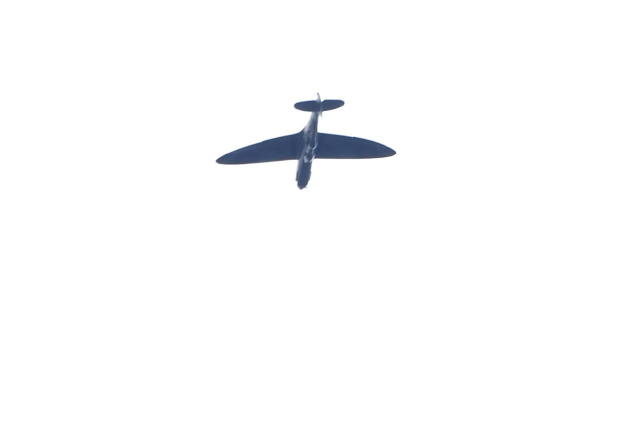 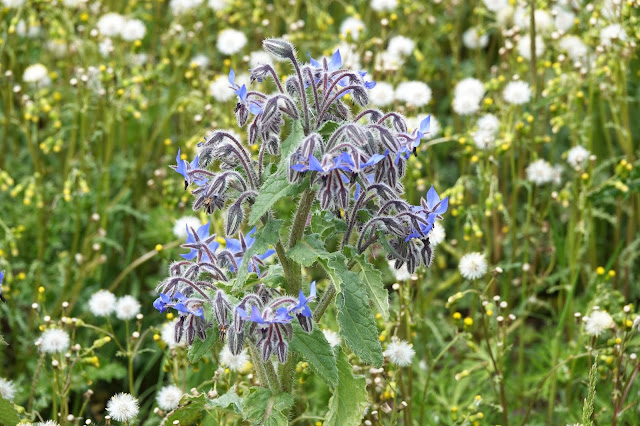 It was all quite pleasant and hopeful and I returned to the car feeling encouraged that even if I can persuade just one farmer to improve his land for wildlife then my efforts will have been worthwhile.

Georgie had one last treat for us with the first flowers of Corn Buttercup on the farm that have been reintroduced from seed supplied by Kew.  This is a tiny pale flowered hairy species and hopefully it will become firmly established here in years to come. 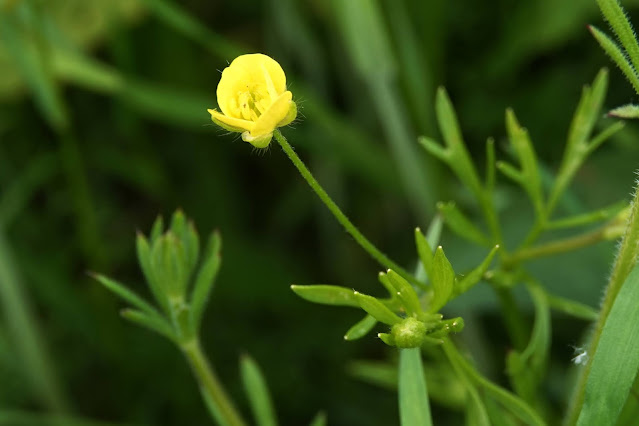 My intention at 4.30 was to head north towards the Nene Washes for the evening but the sky was darkening and as I left it started to rain and went black all round so I gambled on a good run home instead and somehow was indoors in 90 minutes after a long but educational day.


Posted by Howard Vaughan at 20:50 No comments: