After an interesting slightly countryfied journey we made it to Dungeness before nine and went for a walk at the ARC and by working with the surprisingly bright sunshine we were able to encounter all of our targets with up to a dozen Great White Egrets, two shimmering Glossy Ibis and a drab my most welcome female type Long-tailed Duck.  The Great Whites were feeding together at one point before dispersing to new feeding grounds.  I still find it strange to be so blasé about this once rare species.

The two Ibis were spooked by a striking male Marsh Harrier and although never that close still shone green and almost purply bronze.  The usual dabbling ducks were all present and correct including several obliging Pintail still in various states of eclipse and the larger islands were hosting a blanket of Lapwing with a smattering of Golden Plover dotted amongst them.  The breeze was making then very ‘chatty’ and both species were constantly vocal.  Two Little Stints and a Dunlin were amongst them and when the flocks were spooked and circled above you could even hear the chittering of the Stints as they too flew around. Three Black-tailed Godwits came in and started to feed just outside the hide and a couple of Teal were following them around to see what they stirred up.

Most times there was as usual no reason whatsoever for the waders to dread but a large male Peregrine was certainly responsible on at least one occasion leaving the sky shimmering with the flickering black and white of agitated Lapwings.

The wind was making finding small birds very tricky but we could hear Chiffchaffs, Blue, Great and Long-tailed Tits and both Goldcrest and Firecrest but we saw none.  Skylarks, Meadow Pipits, Goldfinches, Linnets and a few Siskins bimbled south and a Sparrowhawk was seen off by the Carrion Crows while a Buzzard surveyed from a small tree.

The diversity of plants in flower was amazing for late October but it was pushing 20c and there were still plenty of insects on the wing with numerous flies (Syrphus and Neomyia amongst them) and Wasps and the odd Rush Veneer, Red Admiral and Speckled Wood.  Common Darters were everywhere and I counted 42 on our walk.


We crossed the road to check on Boulderwall and the two Glossy Ibises chose that moment to fly right over us before dropping out of view.  There were no Cattle Egrets with the livestock but the Bearded Tits were vocal but inevitably invisible in the swaying reeds so we headed for the fishing boats for lunch and a seawatch passing two Kestrels and amazingly a Hobby interacting alongside the ARC. This is by far the latest one I have ever seen in the UK.

The tide was in and the wind was blowing onto the point and with fantastic light it made our views of a red-eyed Red-throated Diver even better as it fished energetically just offshore along with several Great Crested Grebes and Cormorants.  Gannets flew both ways across the view with some making a beeline for a small inshore fishing boat that they circled with the melee of gulls which included a second winter Yellow-legged.  Three single Sandwich Terns, Grey Plover and a Turnstone were seen too but once again there were none of the hoped for Little Gulls. 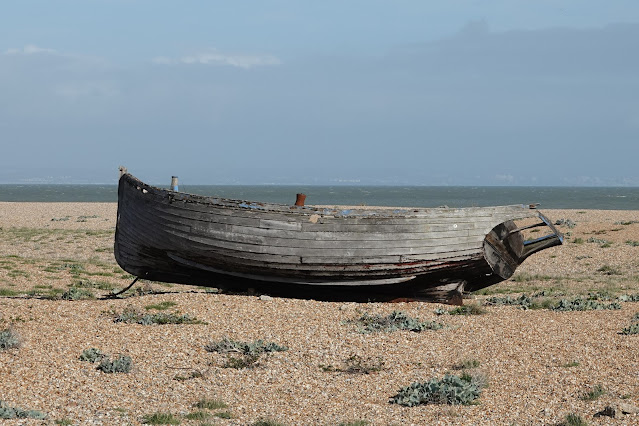 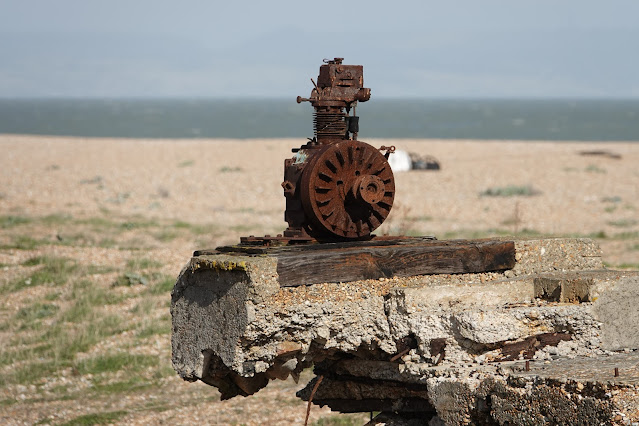 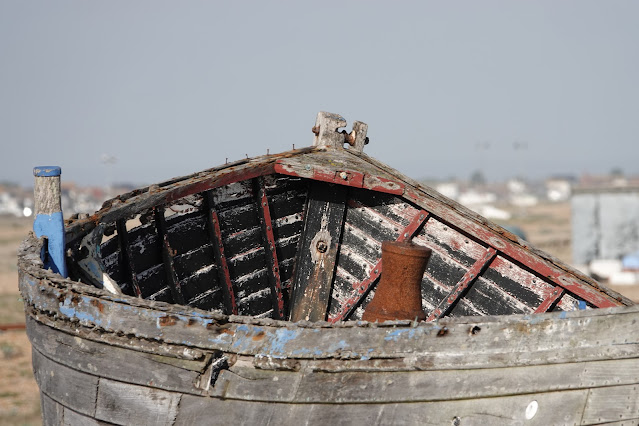 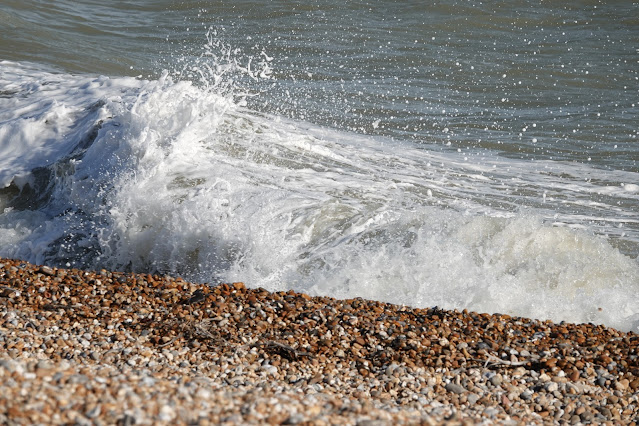 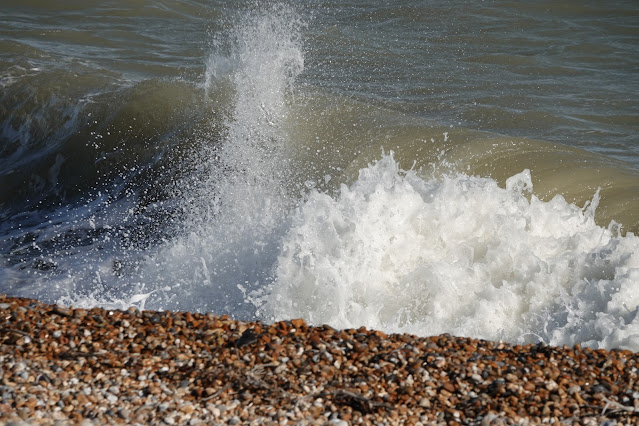 A Meadow Pipit posed on the shingle and a Water Pipit flew over calling low enough to see its shiny white belly.  I was consciously looking for a Crimson Speckled but was still pleased to find another beautiful Palpita vitrealis that momentarily gave me palpitations.

The RH&D steam train chugged through filling the air with the smell of coal and the steady chuff chuff of its progress and taking Pat back to his childhood in Yorkshire. 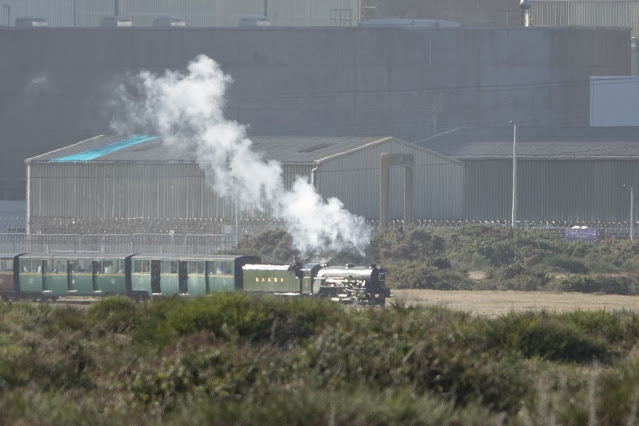 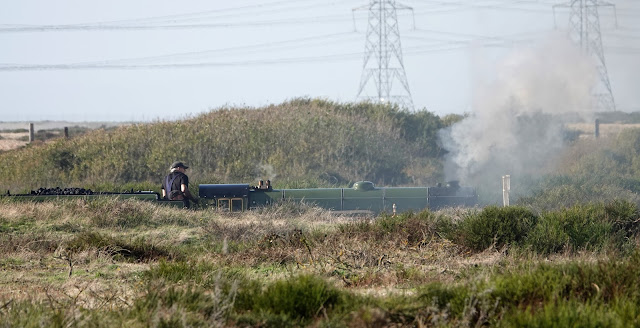 It was now too windy to check any bushes whatsoever so we drove around the block to Springfield Bridge to have a look across Denge Marsh with the wind and sun behind us.   A very clean and actually quite small first-winter Caspian Gull was found playing with sticks behind the main group of roosting big gulls, flashing those long pink legs and silky white underwings. 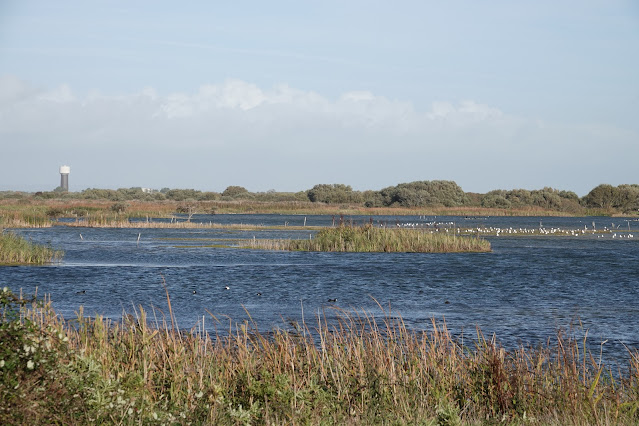 Little Egret and Stonechat were added to the day tally but of Cattle Egrets there was still no sign.  I decided that the south coast was not going to add much more to the day with the ever increasing wind so we headed cross country on a lovely route through the autumnal countryside up to Grove Ferry.

I knew we could not stay late enough to see the incoming roosting Crane but I thought that there would still be some duck and possibly even waders to search through from the ramp but alas the lagoon was completely full and only two Mute Swans were present.

However it was still a pleasant end to the day with the golden low light shimmering through the silver heads of waving Phragmites and the air filled with their seeds drifted with a will of their own across the marsh. 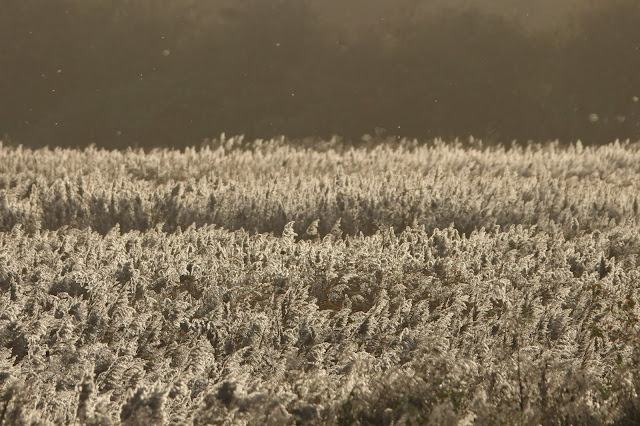 I found three Cattle Egrets way off behind Harrisons Drove with the first seen perched up on a gate post and Marsh Harriers were constantly quartering with the odd Buzzard in tow.  Gadwall were the most numerous duck from the Feast hide and many were engaged in group displays.  Close up you could hear a quiet little sound given before the classic ‘Gadwall fart’ as well as the whistle.  They are often thought of a drab but the complexity of plumage pattern and tone is exquisite. 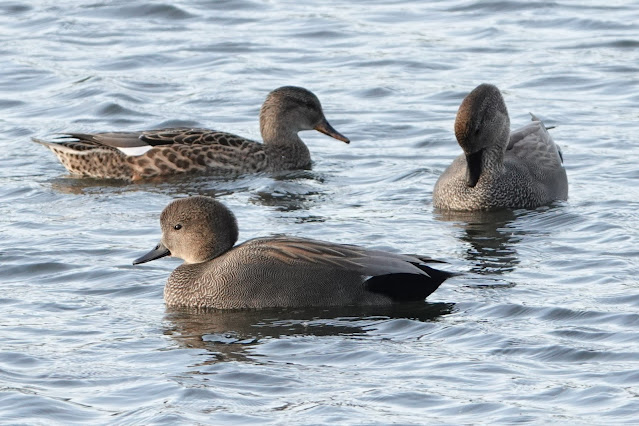 A female Pintail tried to blend in with the Mallards and two Lapwing were the only wader that we saw.  We walked back to the ramp adding a Stonechat hunting from the very top of a spindly dead tree within the reeds and a lumbering Raven that was seen off by a group of Jackdaws.  The hundreds of Rooks took no part in the chase and simply swirled over the trees from which they had been disturbed.

Beardies called and a Water Pipit flew over while a very atmospheric Kingfisher was on the stick placed just for it in the main channel.  The whole scene looked sublime in the golden light.  A Tit flock followed us back to the car with peeping Goldcrests and bounding Long-tails and was a lovely way to round up the day out.

Posted by Howard Vaughan at 20:18 No comments: