Pat H and I decided to head down to Worth today despite the rather inclement weather forecast as he had never seen an Eleonora’s Falcon and I was hoping that it would get up and fly around in the potential 10-12 weather gap in the forecast.

We started well with the female Red-foot visible out on a post from the car park where that incredibly white 1st summer head glowed while a Hobby predictably perched just a few posts away.

The walk down was pleasant and it was certainly a few degrees warmer than yesterday but still grey and gloomy.  The Ellie was perched up in the lee of the wood and not doing a lot so we spent our watching the Hobbies and Red-foot and chewing the ornithological fat with friends.

Bang on cue the Ellie started to get fidgety as the sun attempted to break through and after a few practice sorties out over the pool it decided to put on a star performance from then on giving breath taking views down to just a few metres above our heads. 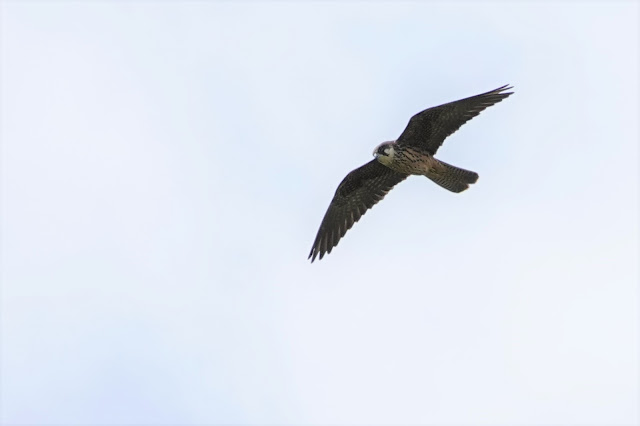 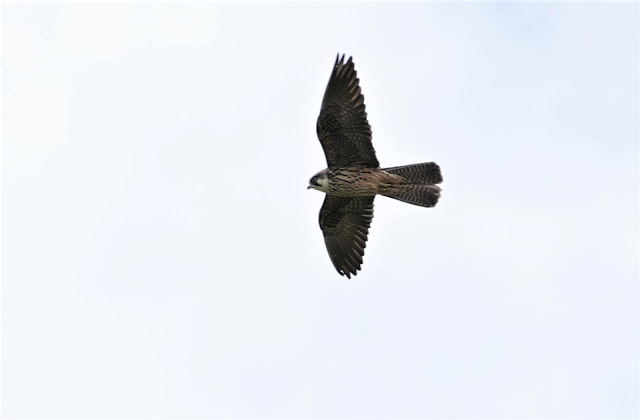 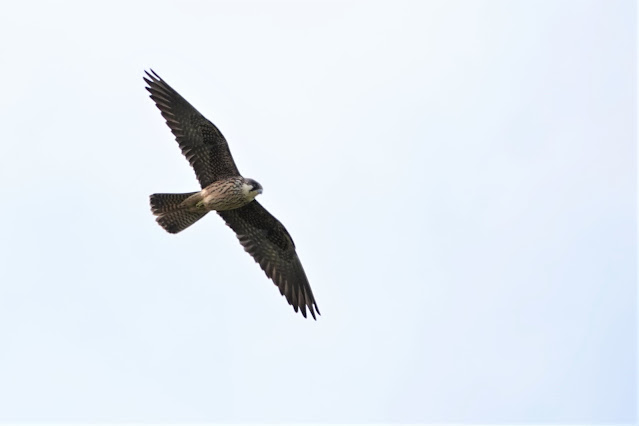 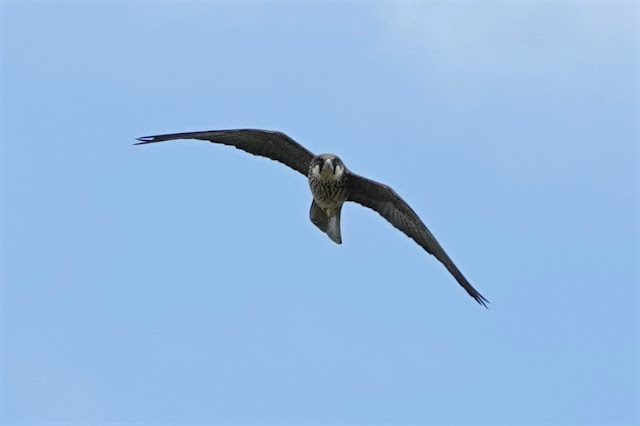 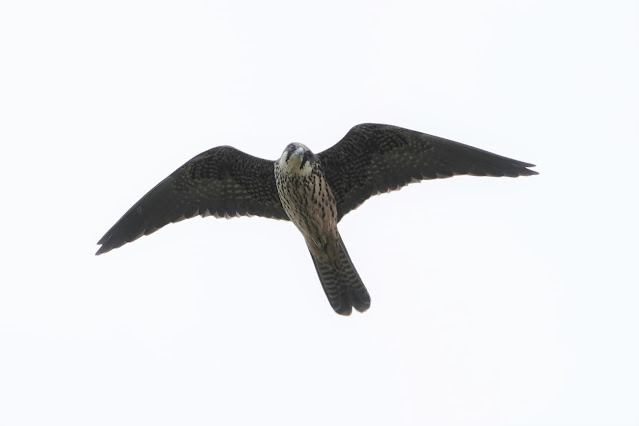 I have seen the species particularly well in Lesvos in the autumn, especially at the scenic Pithariou Monastery but nothing even close to what we experienced here.  It happily snatched Damselflies from the air and munched them on the wing banking with languid flicks of those elastic wings.  At times it was too close to get in the shot but somehow, even then I still got a pic or two! 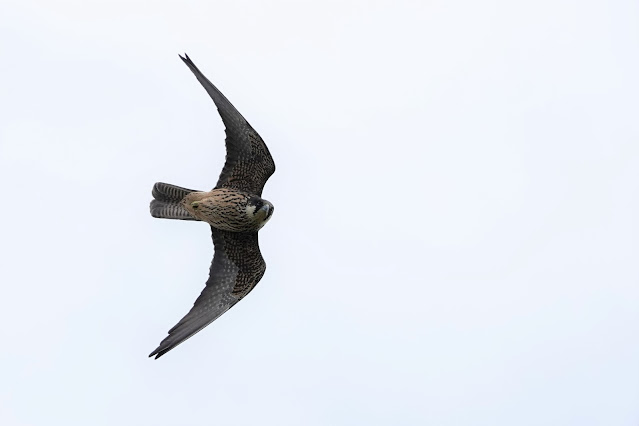 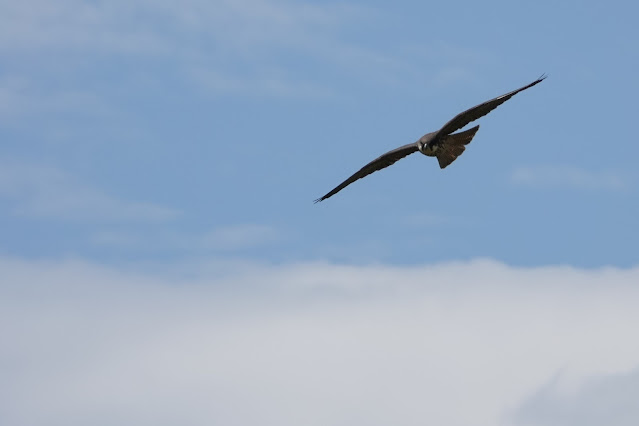 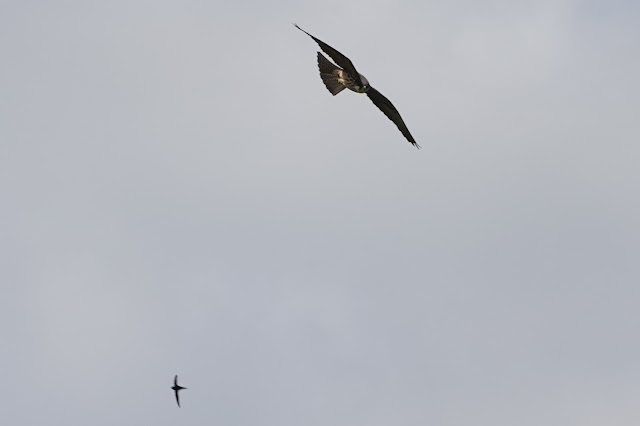 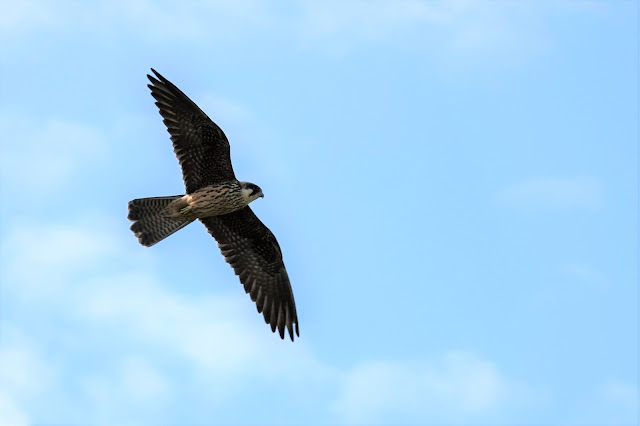 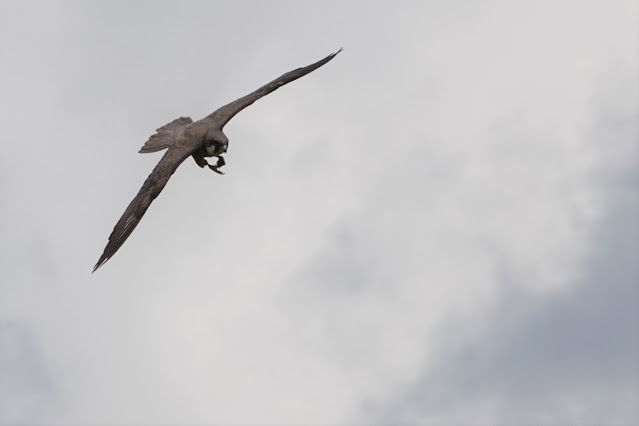 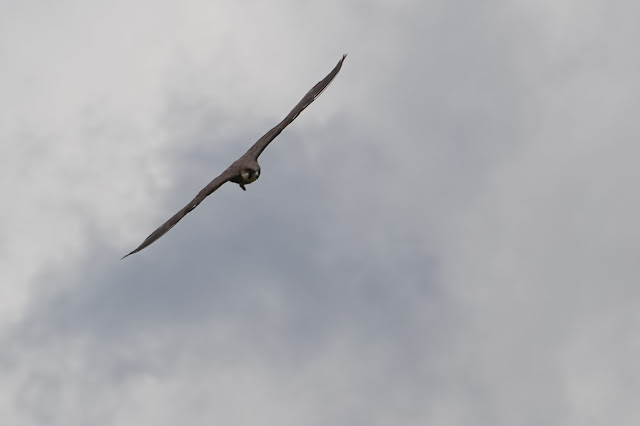 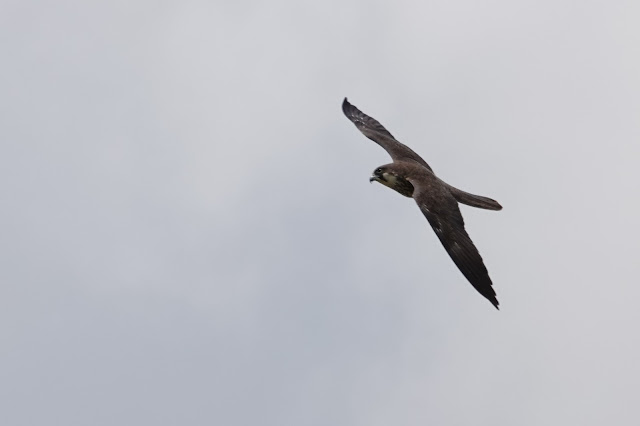 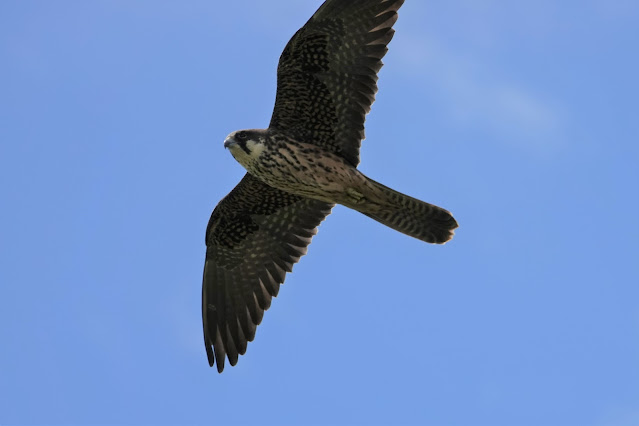 Looking west, a wall of black cloud was approaching and so Pat and I quite literally had walk away views of the Falcon as we started the slow stroll back.  My first Black-tailed Skimmer and Variable Damselflies of the year was seen on the path and Little Ringed Plovers and Oystercatchers joined yesterday’s wader list on the scrapes and two Kestrels were added to the falcon list.  What I did not notice yesterday was the Beaver felled tree at the corner of the woodland and one day I hope to see them I Kent given how well they are now doing. 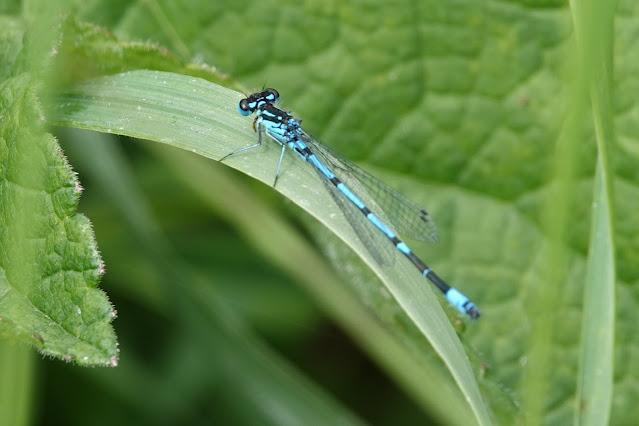 The heavens opened as we got into the car with our lunch and we decided that chancing our luck any further was fairly futile given the weather forecast and hit the wet road back home.

Posted by Howard Vaughan at 15:34 No comments:

Having stoically resisted to go for the Eleonora’s Falcon at Worth near Sandwich in Kent over the weekend I then tweaked my day plan today and started down there at about nine o’clock before my Orchid day tour was due to begin.

It only took an hour to get there and the walk down through the pools and meadows was very pleasant but I knew that I was unsighted on where the falcon was sitting so it was a slightly nervy 15 minutes.

As it happened the first falcon I saw was the female Red-footed as she scooted across the fields and up into the edge of the copse.  This was in fact the last time I saw her as she did not emerge until after I left but a nice start nonetheless. I put my bins up and could immediately see the Ellie sat on a small white post and absolutely dwarfing the dinky little Hobbies that were sitting either side of it.

For the whole hour I had there he (it is a 1st summer male) barely twitched and merely glanced around while the Hobbies took their fill of small avian prey and occasionally gave their bigger cousin a little poke.

It was just too cool for any serious action but he looked superb in the scope with the chocolate plumage, off white face and warm cinnamon streaky underparts. Strangely this was probably my nest view of a perched Ellie as most of the time I get to see them hurtling across the Lesvos sky.

I have a history with Eleonora’s in the UK having found a dark phase bird at RSPB Rainham Marshes on the 20th September 2009 during the course of our autumn fair.  A few people got on it as it lazily circled above the marsh (on day with notable raptor passage) with me shouting over the tannoid for anyone with a camera.  Back in those days it was not a given bit of kit to be taken out and not a single picture was taken.  We saw it through the scope though and despite the various eyes, our description did not pass muster with the BBRC as ‘not proven’ which was a pity.  To this day I am still more than happy with what we saw that day but it did not make today any less special as they are one of my favourite species of any Lesvos trip.

Sparrowhawk and Buzzard were added and Reed Buntings obligingly sung from the adjacent reeds were Sedge and Reed Warblers were also still in song.

Avocet pairs had at least four broods between them on the pools and I could hear Redshanks and Lapwings too. The borrowdykes were full of Yellow Water Lilies but there were only a couple of torpid Blue-tailed Damsels and a male Banded Demoiselle. 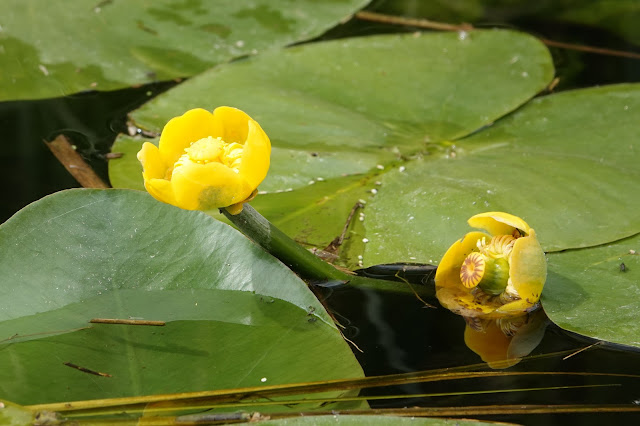 With time a premium and the likelihood of a good aerial performance somewhat unlikely, I decided to amble back passing a Corn Bunting and a couple of interesting inverts on the way with Tropidia scita and a big fat hairy Drinker moth cat.  It was my first major twitch for some time and it was great to reacquaint myself with friends from my birding past. Of course when I got back I discovered that I could actually see the Ellie from the car park albeit at some greater distance!

I cut cross country and met my crew at Park Gate Down for the first of our Orchid walks.  It was 11c and the fleece had to go on! Ridiculous!  Thankfully it does not affect most plants and we were very successful in our hunt with many scrunched up gnarly Monkeys with their long pink arms, the first Common Spotted and attempts at Chalk Fragrant (we even found one that was already scented), the lone dignified Lady, worn out Early Purples, subtle Twayblades, tiny Flies and a stand of 13 majestic Greater Butterflies. 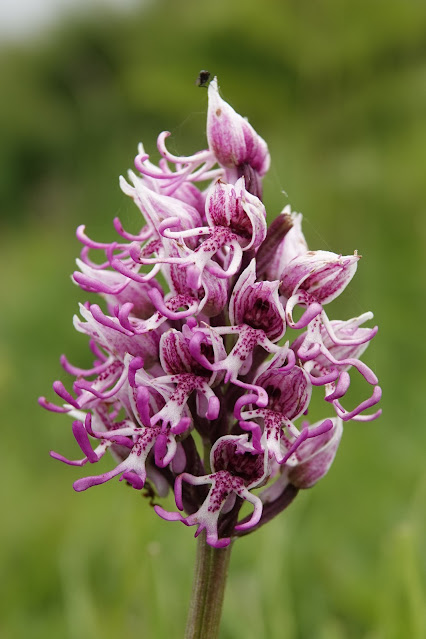 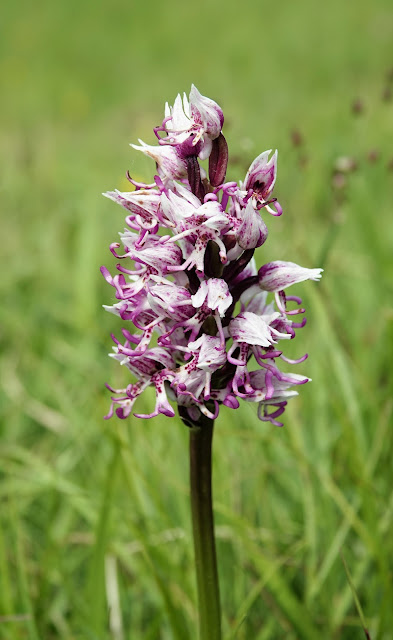 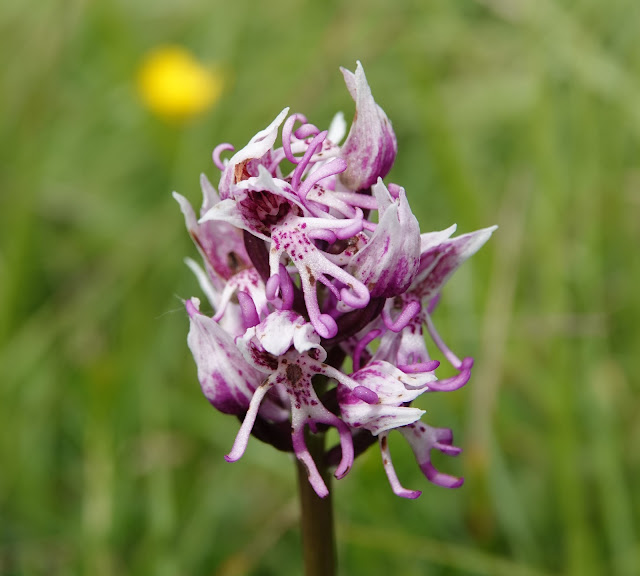 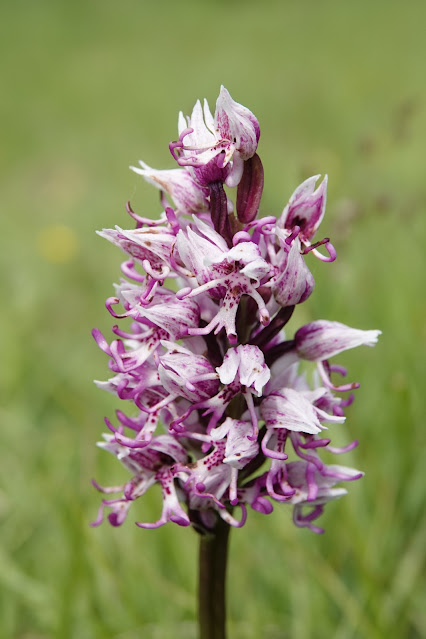 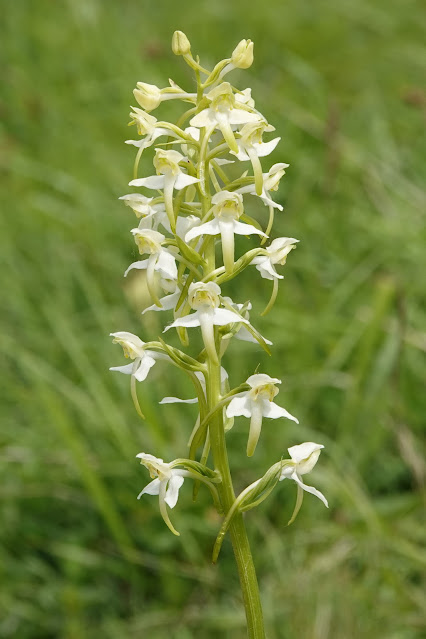 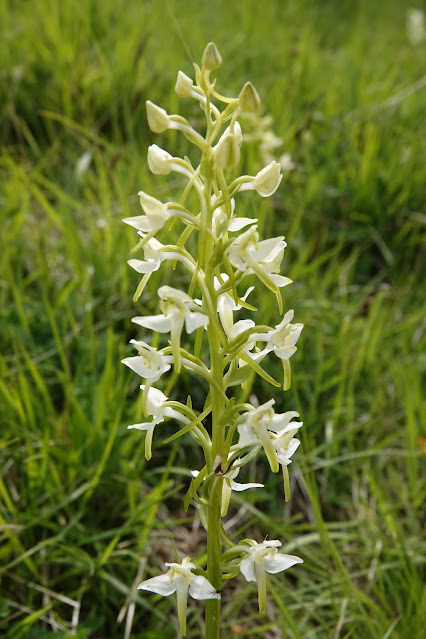 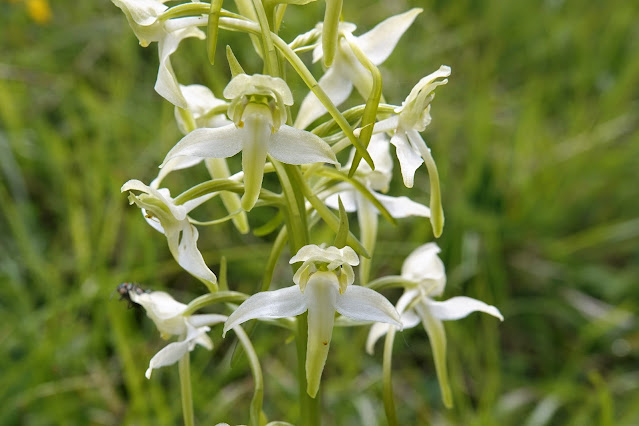 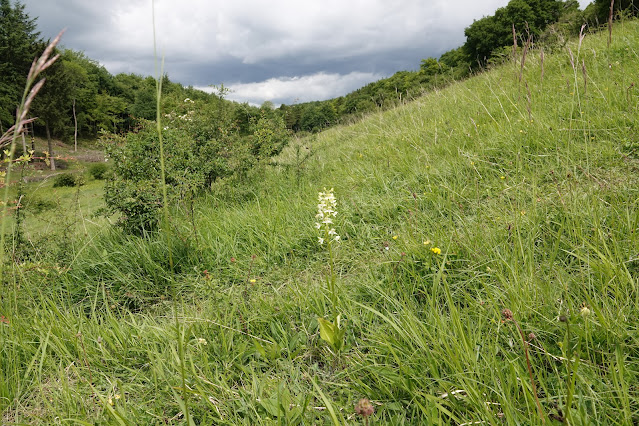 There were plenty of Speedwells and Vetches and a few deep coloured Milkworts while the Columbine nodded at the top of the bank.  There were basically no insects with just a few Hovers and Bumbles and just one pair of Common Blues to represent Butterflies!

Bullfinches called and I could hear Firecrests, Goldcrests and Yellowhammers but no fluty Golden Oriole like last year!

A spot to eat and then on to look for some Late Spider Orchids.  We got lucky and managed to park and just a short walk later we had a great display before us.  I should have counted but I think that there were at least 30 flowering spikes which as usual offered a bewildering array of patterns and colours. 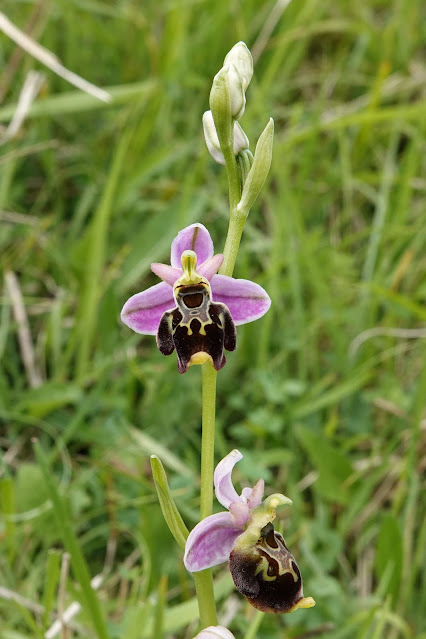 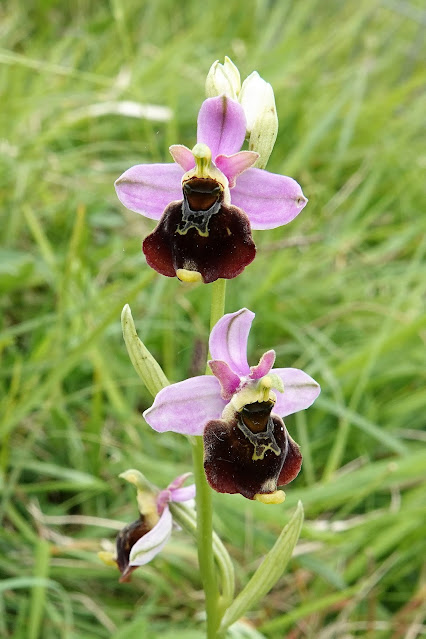 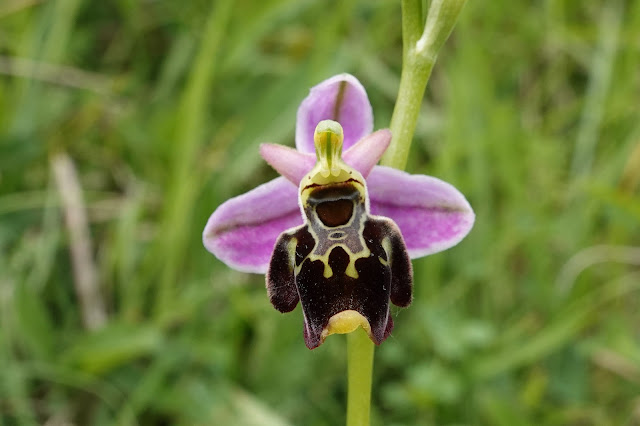 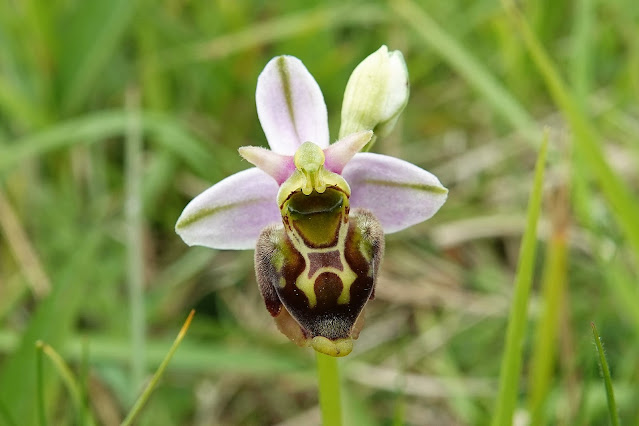 A couple of Pyramidal Orchids were just starting to open up and there were several Chalk Fragrants that were much further along than at Park Gate.  Small Heath, Common Blue and Small White were the only butterflies while Meadow Pipit and Yellowhammer sang up slope.

With only White Helleborine as an Orchid addition at Bonsai and it being too cold for almost insect life  I forwent the long undulating walk and headed up to look for the Lesser Butterflies.  It was raining when we arrived and a quick look down on the main road verge added several Man Orchids to the tally and more Pyramidals before the Butterfly and Lady action in the woods!


The Broad-leaved Helleborines were coming along well and I was pleased to find a couple of fresh (what I think is) Ivy Broomrape spires amongst the remnants of last years in the darkness of the Ivy covered floor by the car parking spot.  Nettle-leaved Bellflower and Ploughmans Spikenard were leafing up nicely.

It was raining  quite heavily by the time we got back and so we called it a day and headed for our homes after a successful excursion with 13 species of Orchid under the belt.

Posted by Howard Vaughan at 19:43 No comments: