With a full complement of guests at last we struck out after breakfast for the magic West and stopped just once en route as we wended our way, at the hillsides just beyond Agra. Sombre Tit was seen as soon as we got off the bus and an Eastern Orphean Warbler popped up and scolded while Easter Subalpine Warblers parachuted down in flutter display. It did not feel like it took too long to get to the start of the track in Eresos which was as usual bedecked by a floral starting gate of orange-yellow Crown Daisies.

It was a journey of many stops but by the time we had crested the ridge we had managed excellent views of most of the target species with Beethoven singing Cretzschmar's, almost tropical sounding Cinereous Bunting whose grey and yellow green plumage allows them to blend in so well with their surroundings and boulder hopping Western Rock Nuthatches.

The plateau is normally quiet but it was full of Wheatears with smart Eastern Black-eared in both forms, the strikingly slim local race of Northern Wheatear and to my surprise several pairs of bold Isabellines with their fizzing light sabre battle song and hovering display. I can't remember ever seeing them up here before. 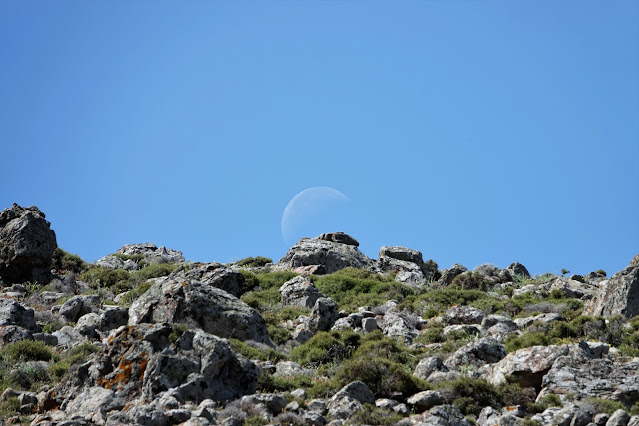 Peregrine, Long-legged and a very good candidate for a fox-brown Steppe Buzzard were overhead with Ravens and Common Swifts and a Little Owl glared at us from some wires.


The track down into Meladia added more quality Bunting encounters along with increasing numbers of Stonechat including several broods and the delightfully sad songs of Woodlarks. It was clear that there was no big fall of migrants though as Spotted Flycatchers and Lesser Whitethroats were the only passage birds noted along with the local breeding Eastern Orphean Warblers but once down at the Magic Trees of Happiness (Olive leaved Pear by the way) we started to find a few more birds with three Pied Flycatchers, Chiffchaff, both Whitethroats, Wood Warblers and two Icterine Warbler. One of the latter was in melodious song and was a good comparison with the Eastern Olivaceous and Subalpine present.

The 'chuck chuck chuckaaa'' of another key species allowed Clive's keen eye to pick up a plump Chukar on a boulder before it suddenly lay flat as a Buzzard drifted over. I scanned for raptors but only found a Hobby and Alpine Swift.

Another musical familiar song guided me to the first male Black-headed Bunting of the season and the doors will soon be open for this charismatic species. The Ford has been completely opened up and the river mechanically excavated since I last saw it in September and the lack of any vegetation was disappointing but a flock of four Hoopoes just around the corner was ample recompense. Two Tawny Pipits got up in front and the Fig Grove held another Icky, Sedge Warbler, Turtle Doves, Spot Flys and a female Collared.

Lunch at the chapel was unusually bird free and the next section of the track only offered up three Rock Doves, Woodchat Shrikes and the usual Sylvias. The Little Owl at the next farm obliged and more Northern Wheatears were seen around it.

I love the view once you get to the top here and start the decent towards what we used to call the Sigri Sanatorium but now know was in fact a Cheese Dairy! I may well just call it the Cheese Sanatorium. The hoped for Lesser Kestrels hovered along the ridge with Short-toed Eagle and Common Buzzard before we stopped near Steve and Gina's vans for a look around. They had found a male Sardinian Warbler and I was pleased we got to see it too along with another green and yellow Icterine. We ambled up the valley a way and Clive picked up a male Golden Oriole and then a Common Starling which is always a scarce spring bird out here. There were families of Linnets in the dry gully and a female Sylvia with a Common Whitethroat drew my attention and after some close scrutiny we were happy to call it a Ruppell's Warbler. This was especially satisfying given the lack of any birds at Kavaki so far this season. Perhaps they are just late getting in like the Cinereous Buntings seem to be this year?

After stopping for the traditional scenic Sigri town photo we poodled down to the beach and Lower Ford at Faneromeni passing obliging males of both Collared Flycatcher and Masked Shrike on the way.


There were three Flycatcher species in the Oak Grove along with gleaming Wood Warblers and Lesser Whitethroats and eight Golden Orioles erupted like yellow and green fireworks from a fig tree a little further along.

Yet another Icterine Warbler was seen and down at the Ford there were two male Little Bitterns, a snaky necked Purple Heron and some bathing Wood Sandpipers.

We talked about the route home and decided to retrace our steps which resulted in some more quality Eastern Orphean encounters and now at least five singing Black-headed Bunting! The Barred Warbler did not show but the Little Owl was even more photogenic and a Woodlark with food for the nest landed right alongside the van. 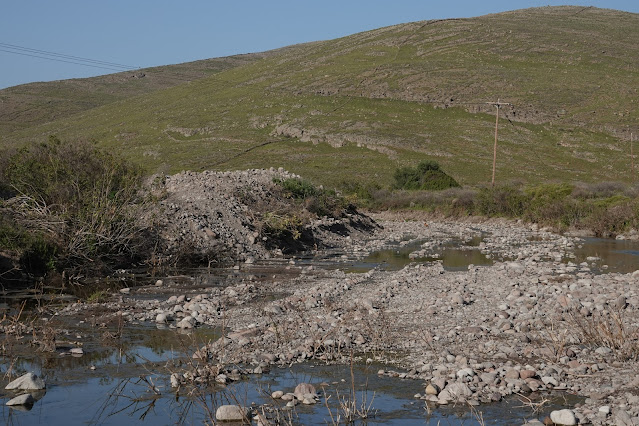 We bid farewell to the Buntings and Wheatears and cruised the winding road back to the hotel in time for dinner after a very successful introduction to birding out west.