Breakfast was interrupted by a squadron of 31 silent Gull-billed Terns heading steadily east and Bee-eaters were already on the move before we left for the day. Agriosikos was to be the morning amble and we passed our first Blue Rock Thrush and a bushy tailed Fox as we got beyond Dafia.

The first Eastern Bonelli's Warbler was in song within minutes of starting out up the track and we encountered at least four territorial males although seeing these little ghostly chipping warblers is another matter. We got lucky though and the patch of one male included the track and the telephone wires above it and with patience you could track him into the adjacent oaks. Cirl Buntings similarly trilled and the first Wren of the trip sang vociferously although I am not sure when I actually last saw one on the island? 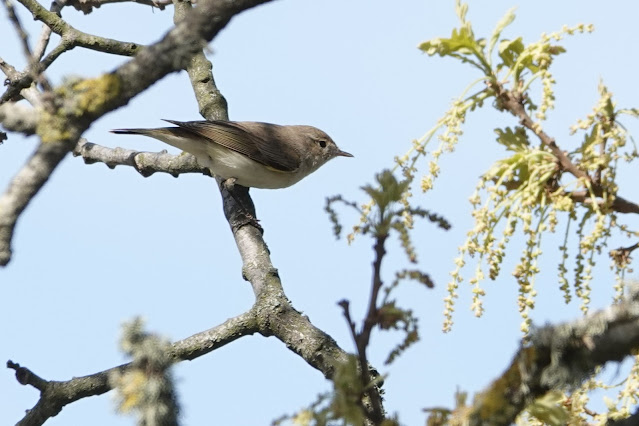 Eastern Subalpine Warblers displayed all around and good views of Sombre Tits were had at last along with more Long-taileds too.

I had already told the crew that it was a good spot for raptors and that I often listen for the agitated Ravens to find something good, when the Yellow-legged Gulls did just the same. Amazingly they had found a Lesser Spotted Eagle and it spent a good few minutes circling not too far above us where all the salient features could be seen. I do not have much experience of these big eagles but I think it was subadult. 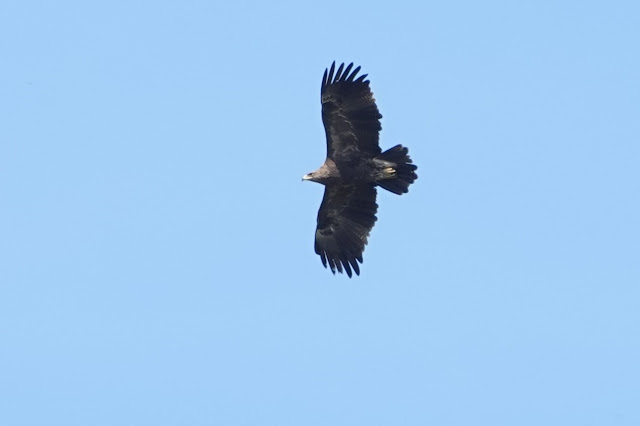 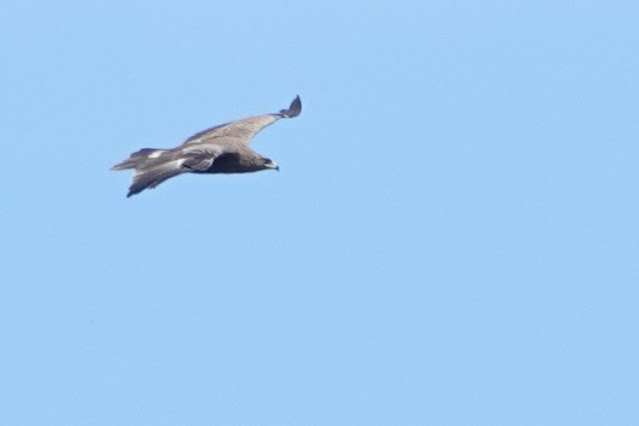 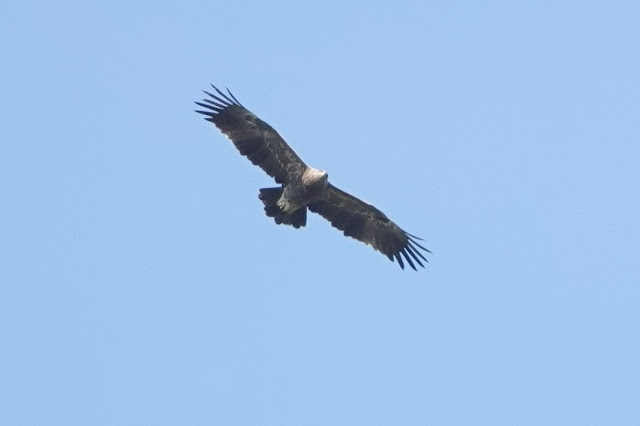 Retracing our steps added a female Sparrowhawk, dark Eleonora's Falcon, Black Stork and a couple of Alpine Swifts and as usual up here the flowers and selection of insect life was superb.

Leaving the masts I descended through Filia and up into the Lardia Gorge which is being changed beyond recognition by frankly unnecessary road straightening that has already resulted in the corner being quite literally cut off at the Pinnacle. I still stopped and there were ten Crag Martins and a few Red Rumped Swallows flitting around and Long-legged Buzzard, Short-toed Eagle and Black Stork were up on the ridge.

Perivolis Monastery was the designated lunch stop (and cat feeding time too) and a short walk beforehand gave us a Middle Spotted Woodpecker leaving its nest hole, Pied Flycatcher, Bee-eaters and Cirl Buntings while a pale Eleonora's Falcon became the second of the day. Once again there was a wealth of flowers and Common and Green Underside Blues and a large Brown Argus. 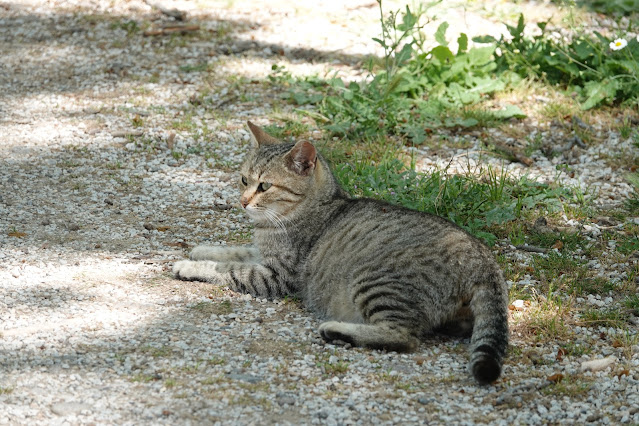 After investigating an ancient Olive we had lunch in the shade and then on around towards Ancient Antissa which produced the expected Eastern Black-eared Wheatears and Stonechats on the coastal section, our first Mediterranean Shag and a really smart adult Audouin's Gull as reward for checking the Yellow-legged Gulls at the mouth of the Voulgaris River. Nine Ruddy Shelduck bobbing around offshore looked a little incongruous.

The beach flora was wonderful with Yellow-horned Poppies and splashes of other colour.


I had no hope of the taverna at Kalo Limani being open but the drive down did allow some excellent views of Blue Rock Thrush and Rock Nuthatches before climbing back up to Skalachori and the descent back into Kalloni with two brief stops on the way, one for a scarily pale adult Long-legged Buzzard and then for a rather rotund Spur-thighed Tortoise that was in the middle of one of the fast stretches.  I moved him to safety and popped him behind a fence in the direction he was going. The Scops Owl was showing nicely (thanks Helen and Jeff) and the Wood Nuthatches were still in the Plane tree while a Hoopoe came across the road and flared its crest upon landing.

A comfort and coffee stop saw us at the Pela with bonus orange cake from Thekla before a bump back out into the middle and the Tsiknias which started well with a 1st-summer Caspian Gull that flew right past us and paraded around at the rivermouth for a few minutes showing off all the salient features.  This was my second spring bird out here and it is still a very rare bird which I still find rather odd given our geographical location. The Lower Ford  was alive with birds above the lower ford. We counted at least seven Temminck's Stint and 22 Little Stints as well as Ruffs, Wood Sandpipers and LRPs but the star bird was a female Citrine Wagtail that bobbed its way around the reedy edges. Seeing one of these is always a special moment.

The rest of the crew got onto the Great Spotted Cuckoo before we spent the last hour of the evening watching nearly 80 Common Terns dipping down over the mirror flat western pans while bobbing PhalaRuffs casually swam around picking flies from the surface while the sun set behind us.