A last early start saw us down at the Tsiknias river mouth and adding three gleaming adult Med Gulls to the group list. They will always be one of my favourites. Singles of Sandwich and Gull Billed Tern were loafing around and Kentish, Grey and Little Ringed Plovers were on the sand bar with the Grey starting to live up to its Black-bellied American name. The Bee-eaters were still around the tamarisks and the Crested Lark that I have seen with varying degrees of leucism over the years was holding territory. This year it has pale coffee coloured wings. 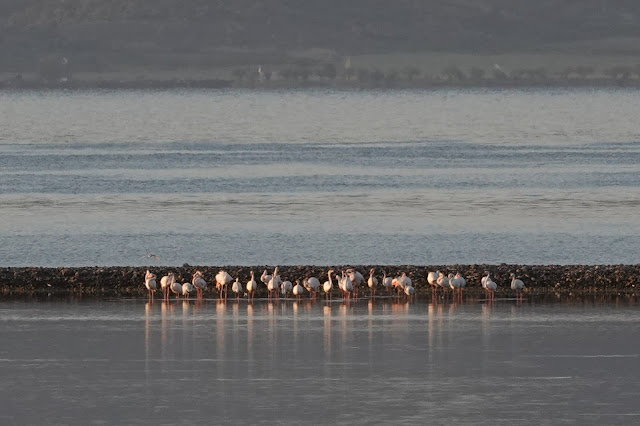 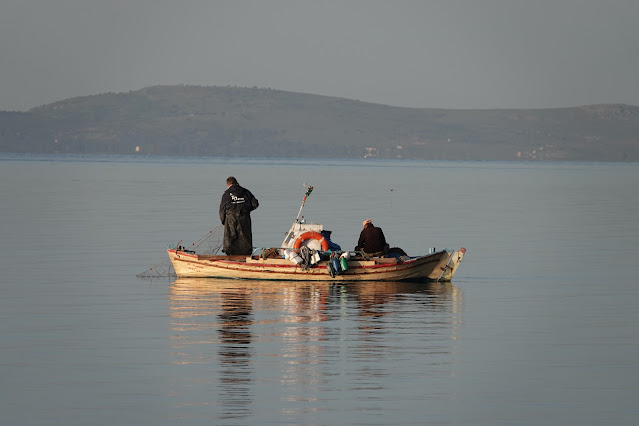 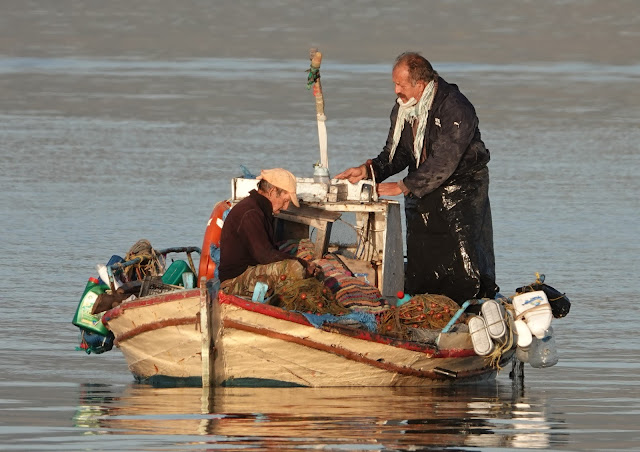 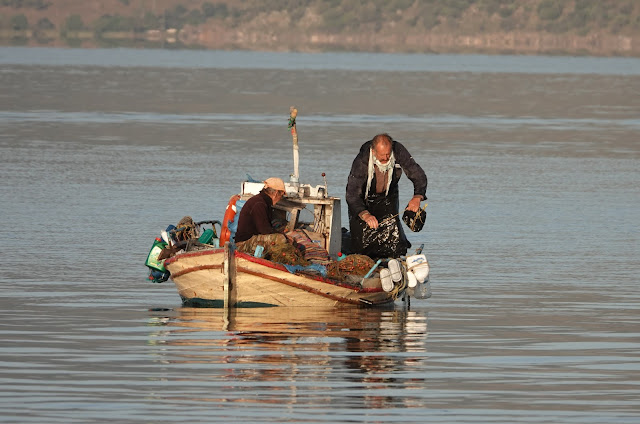 The usual Sandpipers were in the Ford area and a Common Snipe dropped in which was a new trip bird for me. The Acros were giving it large and we all had astonishing views of Nightingale and Black-headed Bunting from inside the van. Perfect moments for a last day. A Purple Heron flopped alongside us and a Hoopoe did likewise but stopped for a wander along the river edge with crest raised. 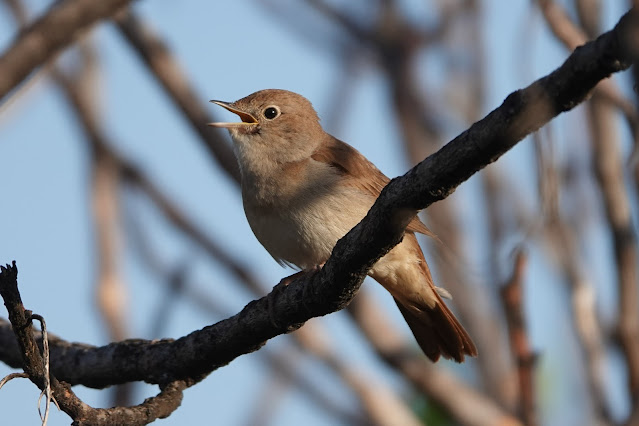 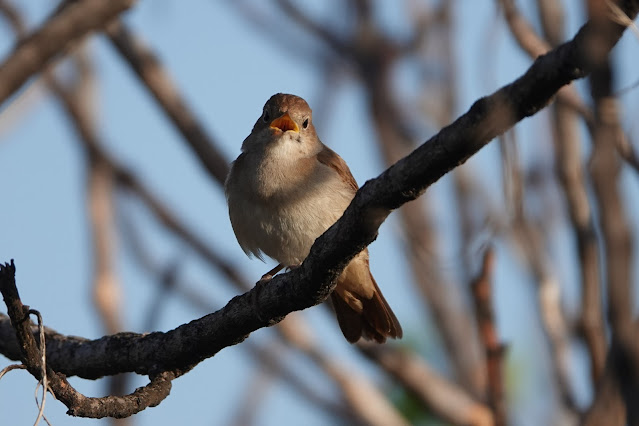 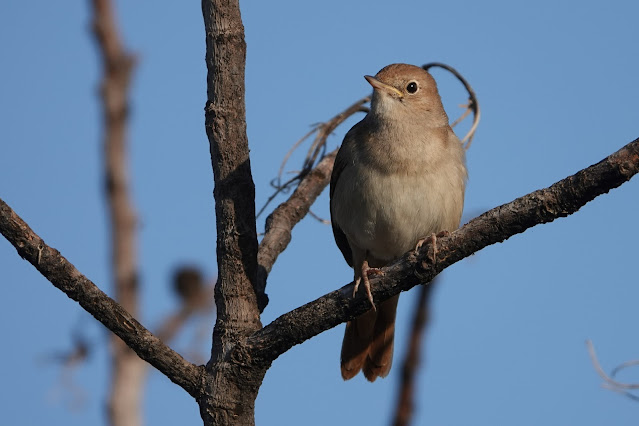 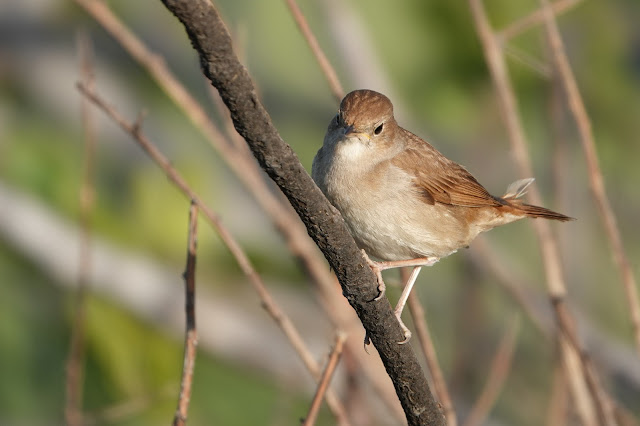 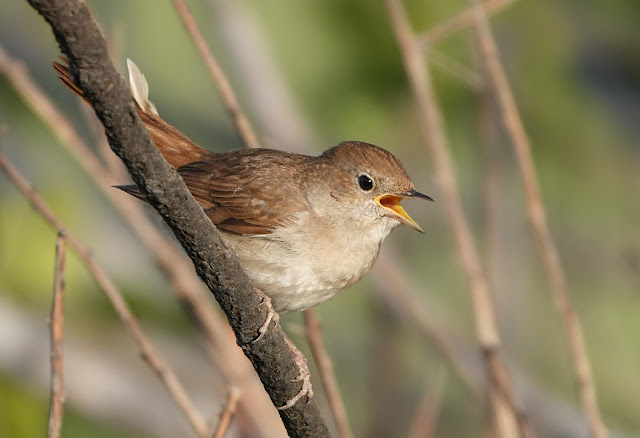 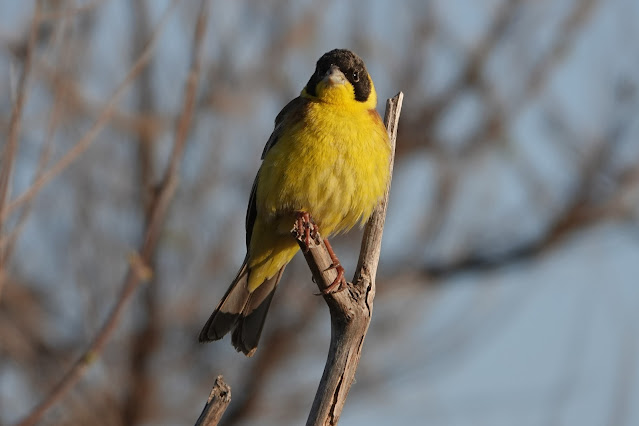 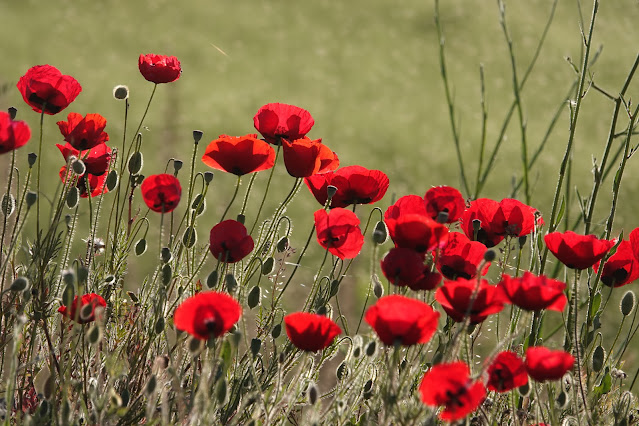 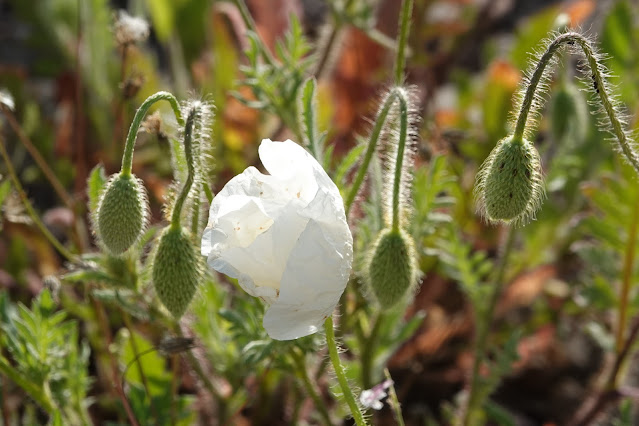 Back for breakfast where I was delighted to find a newly arrived Killian who would then be joining us for our last full day in the field.  It was properly hot but we did our best, starting down at the Eastern KSP where the slow amble down produced superb views of two low flying White Storks, two female and a male Red-footed Falcon with a Short-toed Eagle up in the Grecian blue and a fair selection of slightly hazy waders with at least nine Grey Plovers, Turnstone, Curlew and Whimbrel seen along with two drake Garganey and six dipping White-winged Black Terns. Zitters zitted and Scorn Buntings jangled.

Looping back through town we crawled up through Dafia behind a big lorry to get to Agriosikos for a longer walk through the woods from the masts. 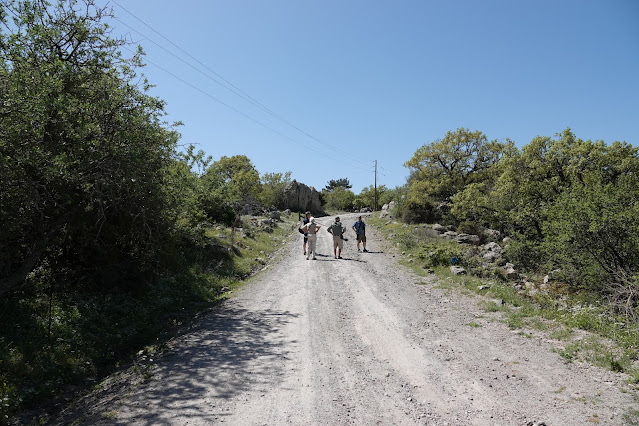 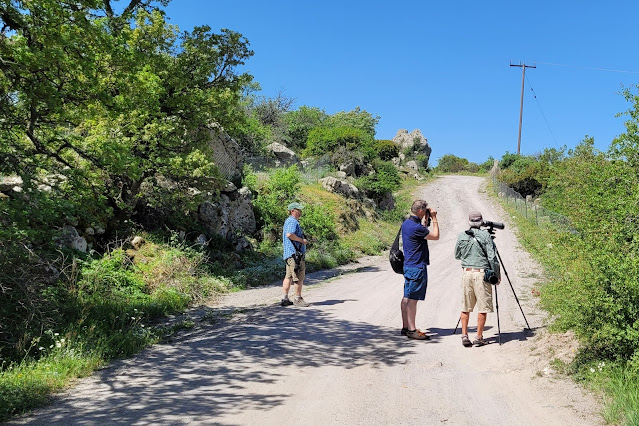 It was very pleasant and although we did not have an Eagle moment like the other day, we did once again find several Eastern Bonelli's Warblers, countless scratchy Subalpines, Long-tailed Tits and Middle Spotted Woodpeckers. I picked up a stunned Black-capped Jay at the trackside and after a few minutes in my hands I placed it on a branch out of harm’s way where it looked like it was going to be just fine. So good to have such a stunning bird so close. 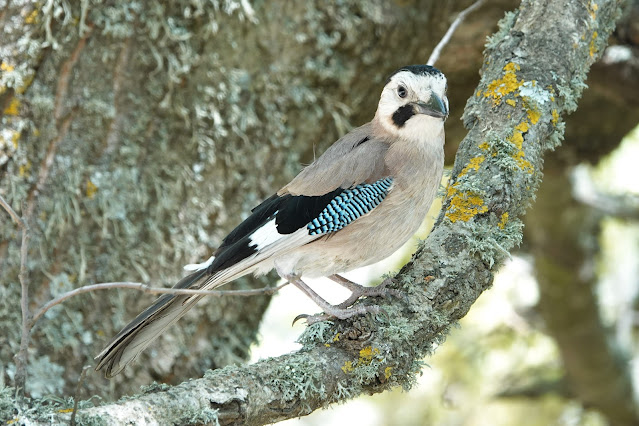 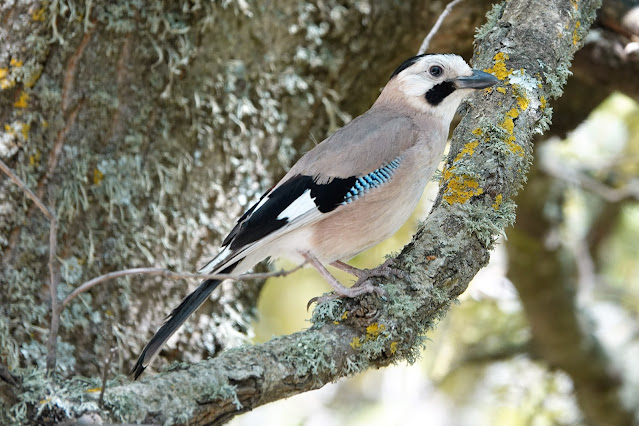 There were many Eastern Festoons and Orange Tips and I added Nettle Tree and Red Admiral to the butterfly list along with a few Eristalis Hoverflies and Tachina fera. An Eastern Green Lizard even stopped long enough for a picture.

The temperature was climbing so we headed back down the escarpment with a Raven send off and had lunch at Limonos Monastery where we discovered a recently demised juvenile Long Eared Owl below the electricity box on the pole which was sad.  A Long-legged Buzzard was flying around with a sizeable snake and I admirably failed to add Pheasant to the list.

Potamia was just too hot so it was time for frappe with Thekla and a brief respite before heading back out at 5pm.

Two Temminck's Stints crept around the Tsiknias with some glowing male Black-headed Wagtails and it was a privilege to watch Killian sketch them in the field. Two Black Storks came in and the Warblers, Nightingales and Buntings put on a final end of day performance.

News of Terns on the Avocet Island pan had us nipping hastily that way for what would be one of the stand out moments of the whole trip for the guests with 23 elegant White-winged Blacks swirling around us with seven Collared Pratincoles in amongst them. Regardless of the numbers of times I have seen this I am always buoyed by the experience and looking around at the first proper assemblage of Lesvos regulars for years it was written across every smiling appreciative face.

It was the perfect way to sign off and head back for a long awaited final dinner and cold beer at Dionysis.

We sorted out arrangements for the following day as we would all be heading homewards at different times and with Killian back at the helm Clive, Peter and Lynne would get a final morning’s birding before they too had to depart.

As for me, I got up the next morning, had breakfast and said my farewells before poodling off towards the airport for my midday flight. I may have had to scuttle between planes but it all went without a hitch and I was safely home by mid-afternoon after a wonderful bonus week in my happy place. 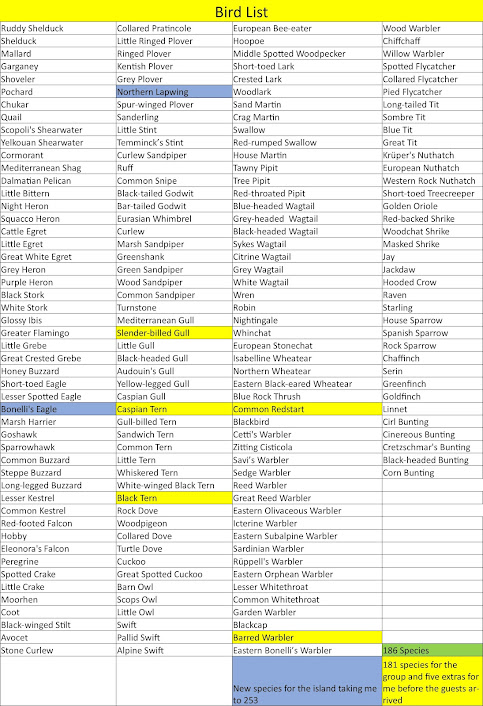 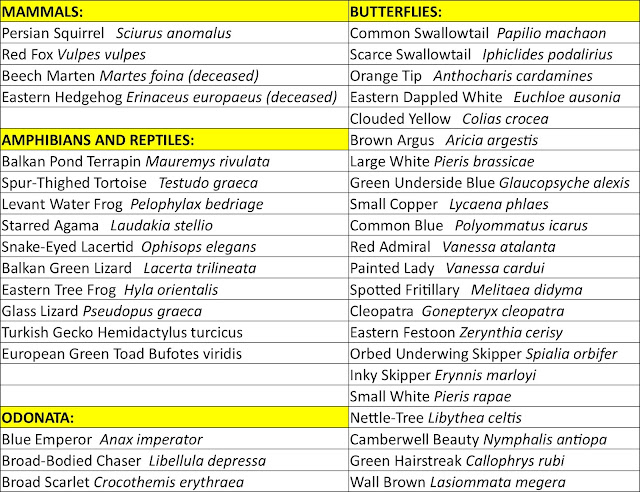