Up with the Howlers again, so to speak and strangely no Pauraque or Owls were heard at all during the night. The normal dawn chorus was getting going with the Cicada backdrop and there were already birds lurking in the shadows.

Wood Thrushes and Orange Billed Sparrows were in the borders and Grey Capped Flycatchers were starting the day at the tops of the trees where the sun hit first.  A patchy piebald raptor down near the river was getting grief from every angle including the Blue Vented HBs.  I was not sure what it was but asked another party with a local guide who said it was an immature Black Hawk.

The rest of the party appeared for the pre breakfast walk up the valley.  The Louisiana Waterthrush was still on his little channel as we entered the forest and we soon collected a very similar selection to the walk the previous evening with two White-whiskered Puffbirds, Wedge-billed, Streak Headed and Cocoa Woodcreeper, the showy pair of Pale-billed Woodpeckers and even a Bright Rumped Attila briefly stopped for a look. It looked strangely out of proportion with big head and a long, almost shrike like bill. The Macaws drifted back and forth and Keel-billed were trying to out sing the Yellow-throated Toucans.

Chestnut-backed Antbirds sang around us and amongst them with an almost identical whistling song were two Black-faced Antthrushes flicking leaves like strange little chickens. A Sulphur Rumped Myobius flashed across the path with its gleaming rear end and a female Dusky Antbird had me confused briefly as I thought it was a Wren.

We could hear Long-tailed Manakins but they were too far back and up the slope and as we turned to come back a Royal Flycatcher popped up just in front but there was no crest action this time. Julie and I saw a Ruby-throated HB as we neared the chalets. The Black Hawk came in and perched up as we had breakfast which was cool for the others and a Yellow-headed Gecko was a new reptile and a wee bit smaller than the Brown Basilisks and monster Ctenosaurs. 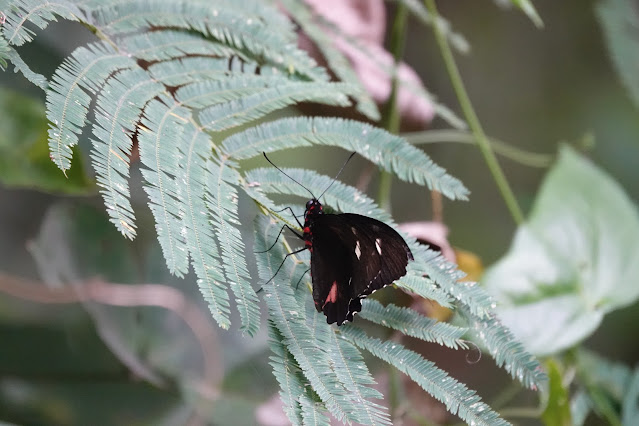 A pair of Rose-throated Becards were making a woven basket nest at the end of a high tree branch and both birds were aiding with construction while underneath one of the Grey Capped Flycatchers was repeatedly attacking its own reflection in the chalet windows.

A glance up before getting on the bus saw a Broad-winged Hawk and Plumbeous Kite drift over as well as the usual two Vultures species and a Yellow-olive Flatbill was wing shivering to an unseen mate.

It was just a short potter down the road to go and collect our permits for the Carara National Park.  We did not get out of the bus and I tried my hardest not to mention the Red-eyed Vireo that I could see on the other side…  there would be others I hoped.

Our morning walk was the River Trail (even though we did not see a river again) and it was hard work as expected within the towering trees of this hot dry jungle.  Unlike my previous visit it was very calm with no gusting winds and falling branches!  As usual we had to persevere to see the birds and be patient but we got our rewards with excellent encounters with Dusky and Chestnut Backed Antbirds, chunky Black-hooded Antshrikes, Trilling Gnatwrens with daft long bills and in the mid canopy several Dot Winged Antwrens which were rather cute.  I saw a female here last time but did not know at the time what I had seen so it was good to have prolonged views.

Black and White Warblers, Yellow Warblers, Yellow-throated Vireos, Lesser Greenlets and Baltimore Orioles moved through with a gang of White-lined Tanagers and two White-browed Gnatcatchers were another welcome addition although they were called Tropical Gnatcatcher when I was last here!

Another Royal Flycatcher was in serious hunting mode above us and flashed chestnut in the sun filtering through and just like at Guacimal yesterday we also saw Greenish Elaenia here too.

In the space of five minutes Dad somehow managed to collect two individual Bullet Ants on his bare arm but I got them off before they could take exception to him invading their space. He was very lucky.

Whip cracking had us staking out some low thick vegetation for some time but to start with only I was connecting with the tiny dapper Orange Collared Manakins deep within but thankfully we all eventually got onto these energetic little birds.  This patch of young trees was in a clearing and while waiting Barred and Broad Winged Hawks went over along with a small Sparrowhawk shaped Accipiter that I recognised from my Florida trip all those years ago – a Sharp-shinned Hawk.

As we retraced our steps we found a Common Tody Flycatcher attending a hanging nest and Rufous-breasted Wrens sang but only gave a few glimpses.

Time for lunch which came with a side order of a giant green and black Swallowtail that actually turned out to be the most magnificent day flying Moth I have ever seen – Urania leilus.  A Green Kingfisher and slightly Spotted Sandpiper failed to upstage it and with rain looming I decided to head out on a solo yomp up valley before part two of the Carara Trails. 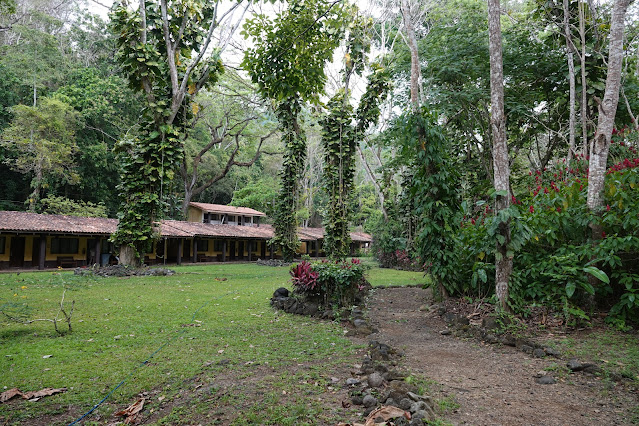 I did not get very far at all and in fact ended up sheltering under the patch of Bananas alongside the Louisiana Waterthrush while the skies emptied everything they had.  Banana leaves can only take so much and I was glad of my hat .  Another large leaf made a good camera cover! I glanced around at the river and it was already rising and changing colour too and even after it stopped actually raining the forest trail then demonstrated just how efficient the canopy is at deflecting water and half hour later it was still steadily dripping through from way above.

With only me on the track the birds seemed to come out a little more freely and two WW Puffbirds followed alongside me while Northern Waterthrushes and Buff Rumped Warblers actively ran across the now wet path.  The Buffies are wonderfully understated little birds but that light bulb of palest yellow on the rump is used to good affect as the tail is waved from side to side and up and down. 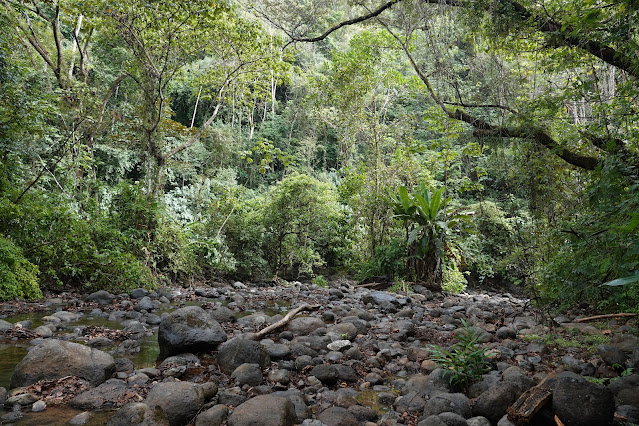 Doves started to appear too and I was initially puzzled by what I thought were Grey-chested Doves as they had a rich cinnamon buff hind crown and nape.  It turns out that they are of the Pacific race and look quite different to those we saw at Celeste and La Quinta.  White-tipped Doves were also seen and the Chestnut-backed Antbirds and Manakins were singing again. Motmots were heard which I think were Rufous and a Sulphur-bellied Flycatcher briefly perched up.

Movement on the forest floor turned out to be a leaf throwing Kentucky Warbler who hopped up for a preen having got a bit damp with his foraging and just above him a group of White-shouldered Tanagers bundled through – it struck me how much smaller they were than the similar White-lined that we saw earlier.

I squidged my way back to the bus and to be honest I was mostly dry by then.  Round two in the park saw us back at the main car park where a nest building Streak-backed Oriole was dangling acrobatically above our heads and was a welcome start to the Figure of Eight Trail.

Our aim was to be at the little stream that the Manakins like by about 3.30pm and so we only really stopped when something presented itself close to the trail but we were very successful and heard several Great Tinamous and found one slowly walking off but the Scale Chested Antpittas would not play ball despite singing persistently probably no more than 20 metres away. Black-faced Antthrushes and Chestnut-backed Antbirds were seen while a pair of Grey Headed Tanagers with nest material stopped moving until we had passed by.  White Tipped Doves and Short-billed Pigeons sang and a pair of Pale-billed Woodpeckers were observed above the base of a tree that they had studiously been working on.

We did rather well with Wrens again and had my best views of Rufous-breasted and Rufous and White grubbing around and after hearing a couple of Riverside Wrens I eventually got a view of one at some distance. Black and Green Dart Frogs hopped about and looked quite different to the Green and Black ones at La Selva.  Apparently they are simply a race of the same species.

There seemed to be Anoles everywhere and for the first time I got to see one wave his throat flag as this pink triangle suddenly appeared in front of me as I walked along!  Just how many different species were involved is anyone’s guess.


Walking in a line has its disadvantages and I was at the back when Steve disturbed a Collared Forest Falcon from the path side but instead of dashing off into the jungle it just flew up and perched where we could all get a good look at this elegant long tailed raptor that had a feel of a delicate Harrier about it. 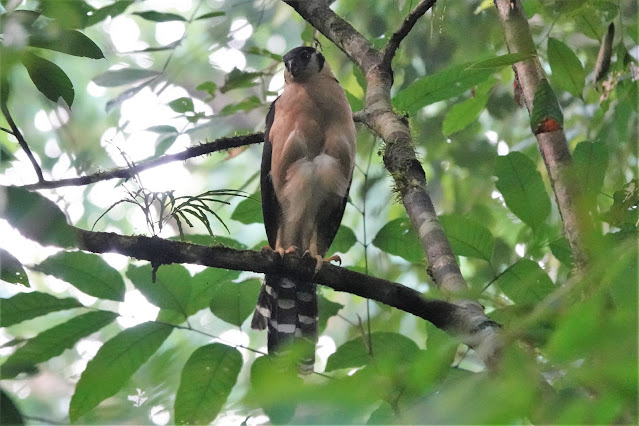 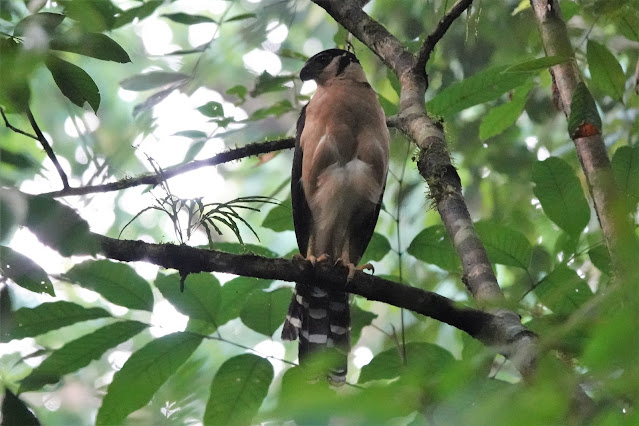 We got to the stream and almost immediately could hear Manakins cracking in the bushes.  Two female Blue Capped came down to bathe along with a single female Red Capped (with the yellow thighs) before a stunning coal black male Blue Capped appeared just in front and proceeded to have a bath in the brook where his cobalt crown shone despite the low light conditions.

Swainson’s and Wood Thrushes also dropped in along with Ochre-bellied Flycatchers and a Sulphur Rumped Myobius while a Chestnut-backed Antbird sang its way to the same spot and bounced between upright stems.

A pair of Riverside Wrens also did the right thing and joined the party and we watched them actively feed in the mid-height tangles above us while a male Blue-throated Sapphire flashed his golden tail (oh why did they change its name!) above the stream just before we had to move on.

It was a quick walk back from here to meet Ramon and the bus at a different pick up point but I still stopped long enough to listen to the evening Yellow-throated Toucan duets and the mournful echoing songs as Great Tinamous started to communicate as the light fell.

It was time to return to Villa Lapas where a quick check on the river revealed that it was now running brown and fast.

Another post dinner Frog Session added more quality amphibian encounters along with a much larger Raftish Spider that could have taken any of the smaller Tree Frogs, a couple more Orthopterans and a huge Cockroach that was busily grazing on a big seed pond. 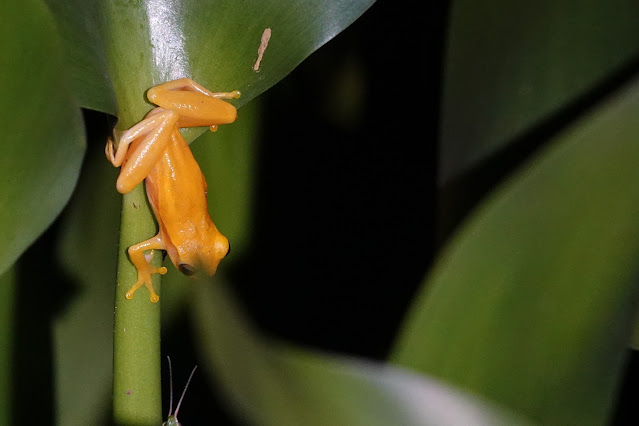 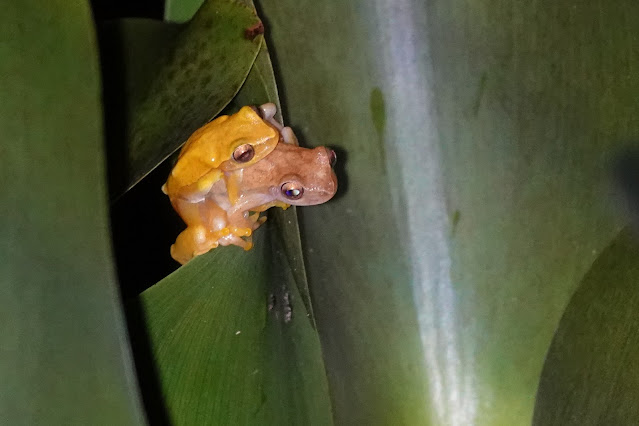 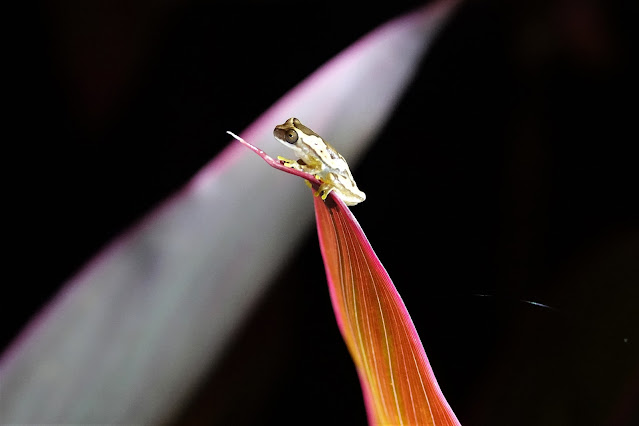 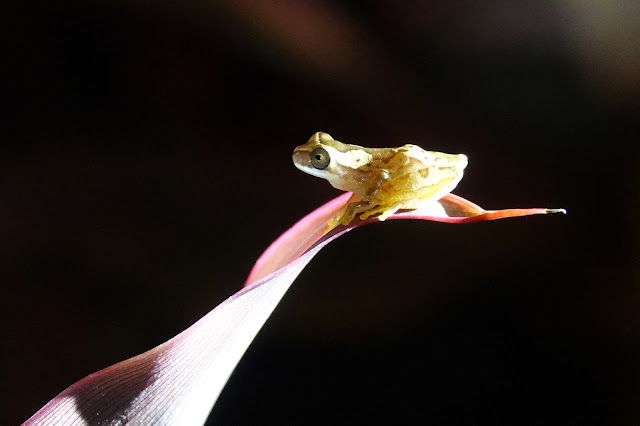 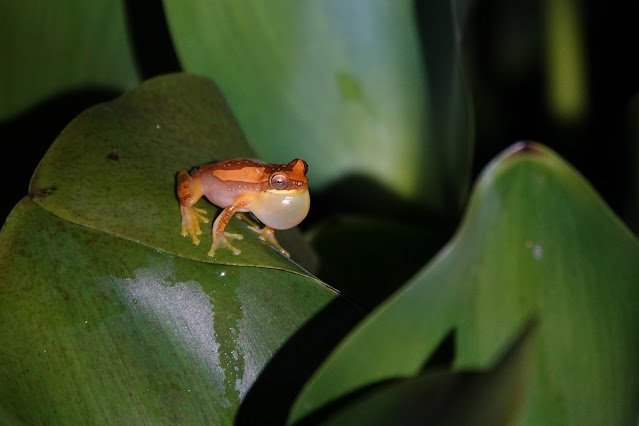 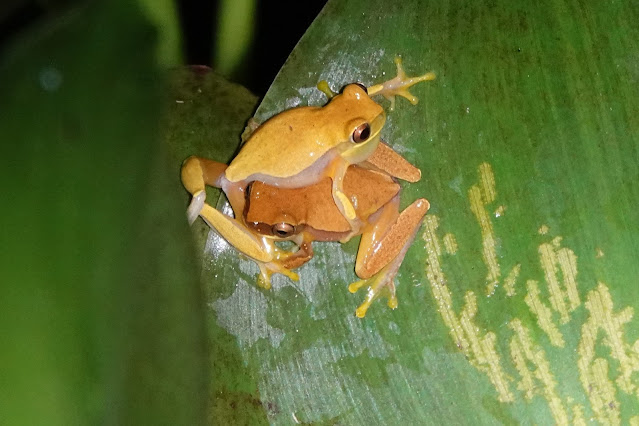 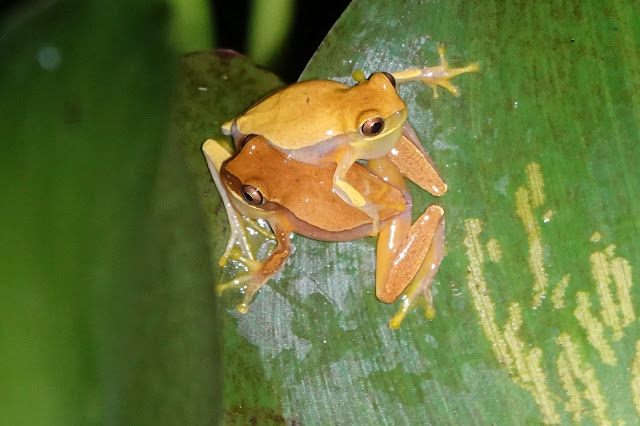 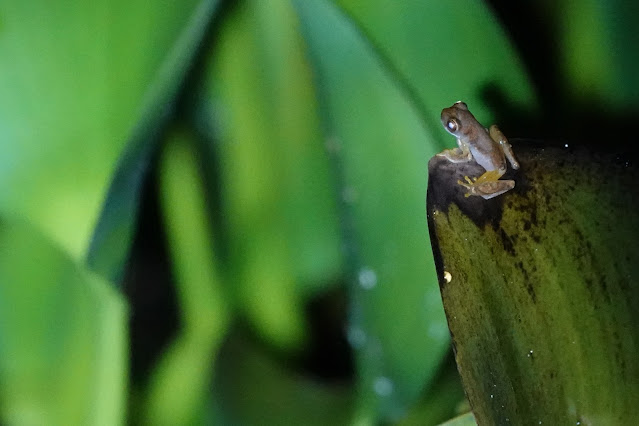