After the trauma of yesterday lunchtime at Shorne, I was all of a dither as to which way to go today or whether to even bother but the sun was shining and so the boots went back on and off I went.


With no great plan in mind I made my way through Strood (where the retail park was back to being busy by 9am) and then cut through to the Submarine.  The Medway was rushing out at an astonishing lick and the waters were going in all directions at once with fierce eddies and swirls.  You would not fancy your chances in those murky waters. 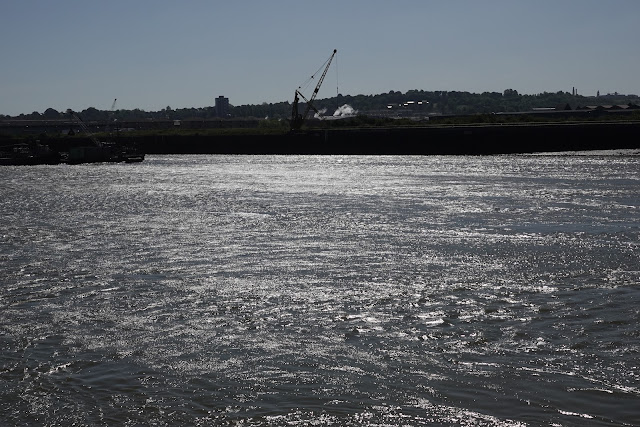 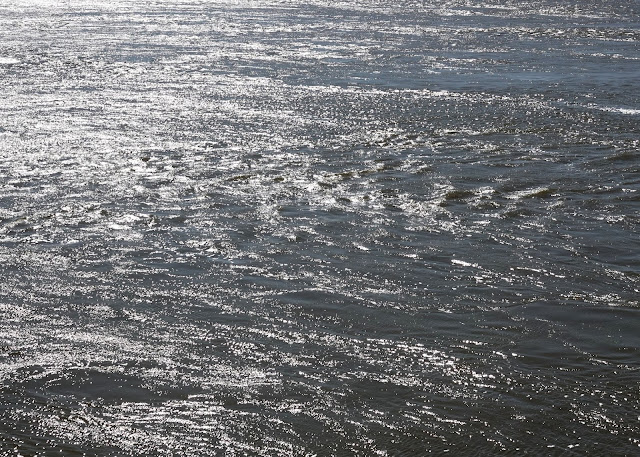 The chalky bit of ‘waste ground’ by the Riverside Tavern still had Pied Wagtails but also an amazing spread of flowers that must have been lurking there all along in the seed bank with Kidney Vetch, Poppies and even Corn Marigolds! 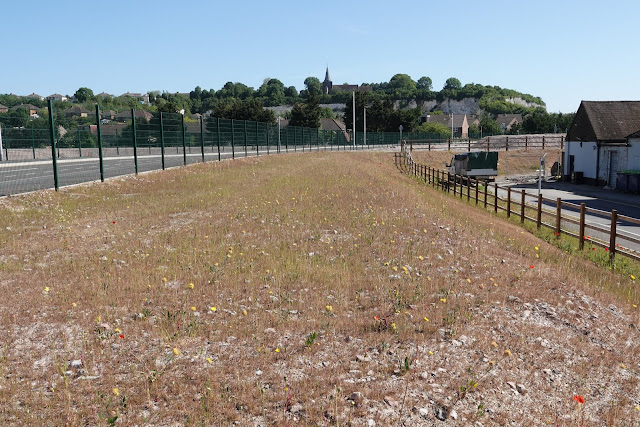 The next open area where the gulls normally hang about now had Tree Mallow and Purple Toadflax flowering along the fenceline and it seems that if there is the tiniest patch of soil then there is a chance of a seed germinating.

I made my way up the slope to All Saints Frindsbury hoping that I would at last find a churchyard with a pair of Spotted Flycatchers but alas I drew another blank and the old quarry top field did not have any orchids as I thought it might but I did find a rather splendid female Broad Bodied Chaser.

I checked the Marsh Warbler looking habitat by the sewage works before heading past Gundulph Pool and into Upnor.


From here I chose not to follow the river be continued on Upchat Road below the woods. The houses here push into the old quarry on the east side and it was interesting to look over the rooftops to see the rather narrow stratified banks above the naked Chalk. I may have to do some geological online digging. 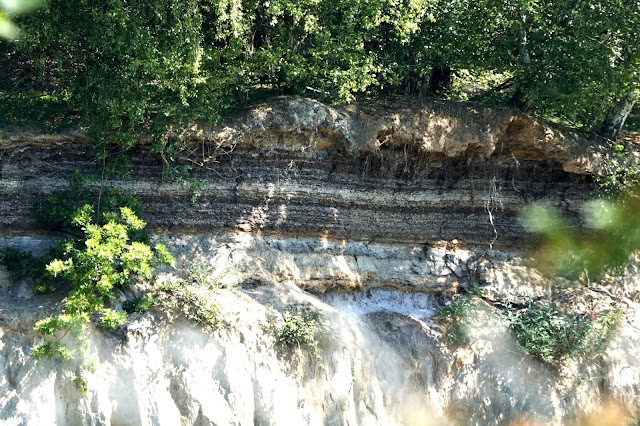 There is a fence preventing you going up to the edge and tumbling down into the tree below – apart from a section opposite a huge rusting cylinder suspended in a metal shed over the edge looking like some redundant Medway Anti Aircraft gun!. I presume it was something to do with the old quarrying process. 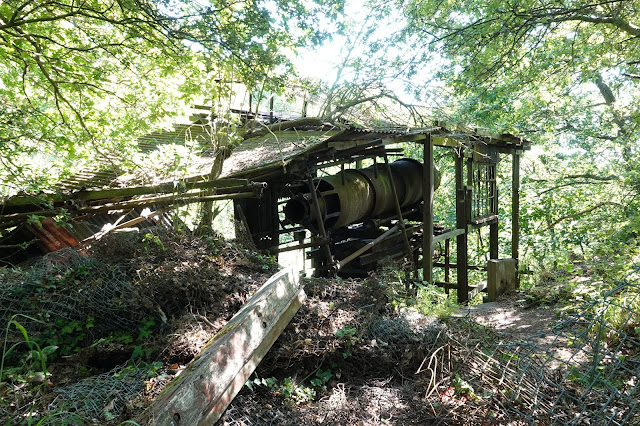 I had not walked this little stretch before and it was good to find another singing Lesser Whitethroat and family of Great Spots. I crossed the main road and cut up towards the defunct Chattenden Barracks and onto the now closed off old road where I had all the Nightingales.


I had the place to myself and was hoping that I might be lucky and find an early Silver Washed Frit but I only saw Speckled Woods and a couple of Holly Blues. There was the odd snatch of Nightingale song and a bit of huweeting and croaking so hopefully they are having a successful breeding season.

The upper ride that I found that took me into Chattenden Woods is obviously often damp as there were Sedges and Rushes (looked like Flase Fox Sedge and Juncus that we get at work) growing in amongst the Brambles, Nettles and Grasses. I lingered and picked up a few Hovers including lots of territorial Eristalis intracaria and a few Syphus and Helophilus pendulus.

I am pretty sure that I added two new bumbles to my walk list with several Southern Cuckoo Bee (B.vestalis) and Garden Bumblebee (B.hortorum) amongst the other regular species.

Dog Roses were in full bloom in shades of pink and white and I may have found Burnet Rose lower down with proper poached egg flowers and small fine leaves.

I did discover two very wild animals lurking in the verge and it took some stealth and fieldcraft to get such good images without disturbing the subjects.

From here I emerged into the orchards and the lane toward Dillywood and home with only a Hobby and a new Yellow Wagtail territory from a bird point of view.

The fields of what I thought were multicoloured lettuce leaves would appear to actually be some sort of mini Chard or Spinach and have already been skilfully scalped by some clever harvester unlike the roadside banks that have been completely obliterated of Alexanders, Campion and Stitchwort that was so full of life... 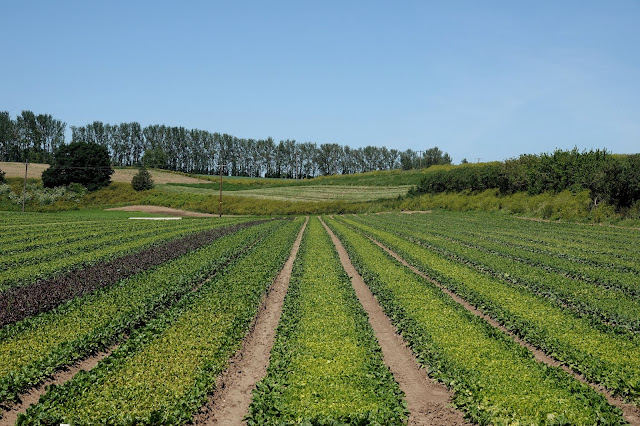 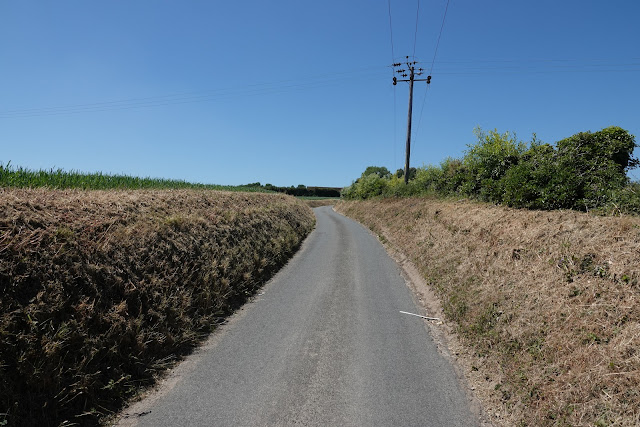 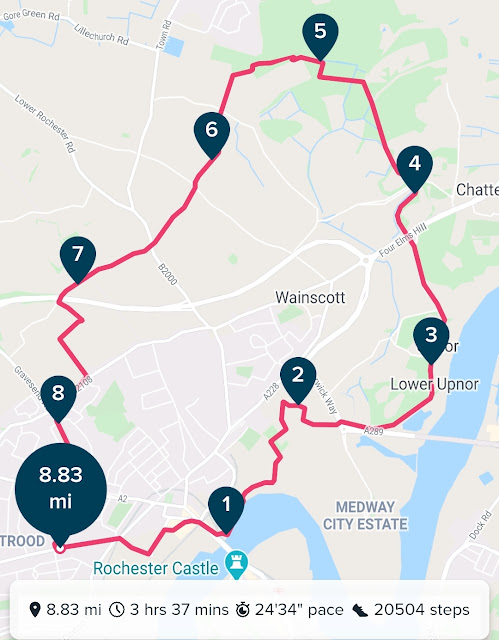 
I know that these walks start to get a little repetitive but in trying to venture out there are only so many routes that I can take to get going  and as such it was back up my road at nine this morning before making my way up onto Rede Common.

It was another glorious sunny morning with blue, unclouded skies.  The council verge butchers had been out and massacred the wonderful flower filled grass banks outside the houses in Columbine but those responsible for collecting litter and removing the piles of fly tipped household, shed and bed rubbish seemingly only pick and chose what they collect.

The smell of warm Hogweed (as opposed to the other sort of weed one generally smells on a walk up my road) lured me onto the common and the flouncy heads were already being visited by scores of Greenbottles, Honey Bees, a few Hovers and a black and yellow Sawfly that I have been told is Macrophya Montana. 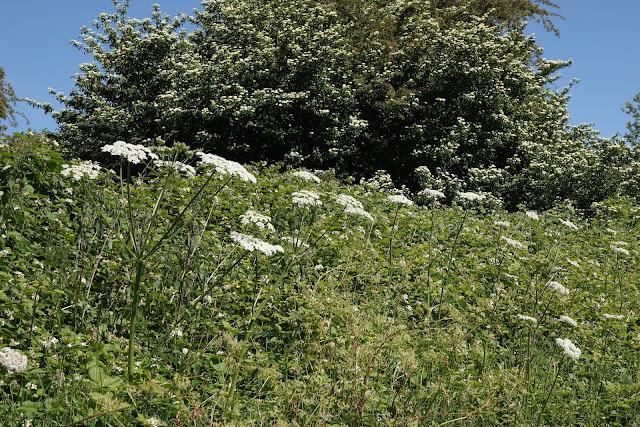 The local Swifts were keeping low but it was quite as you would expect with so many species breeding.


I dropped down towards Crutches Lane and encountered a lady slogging back up the hill. We stopped to allow a car to pass and she alluded to the number of times she had faced the hill back up to her house so I asked her why it was called Kroo-ches but spelt Crutches. She told the tale of three pilgrims who were hung on crosses on the old Watling Street at the top of the hill on their way to Canterbury (she did not say why or whether it was voluntary!) and the old Kentish word for cross is Crutch but pronounced Krooch.  At least I now know that it is not merely a case of Bouquets and Buckets!


Anyway, once under the A289 I headed into Great Crabbles Wood once again but stayed on the lower path that I walked on my first visit. It is amazing how different a wood feels once the canopy shrouds the floor with only an ever moving patchwork of light fragments dancing ahead of you as you walk. I was chancing my luck for some early Silver washed Fritillaries but only encountered Speckled Woods but I did find two adjacent meadows within the old Crabbles Orchard which had Trefoil and Ragged Robin and a numbers of Yellow Meadow Ant hills which points to its age.  It looks good for other butterflies here so I shall return. 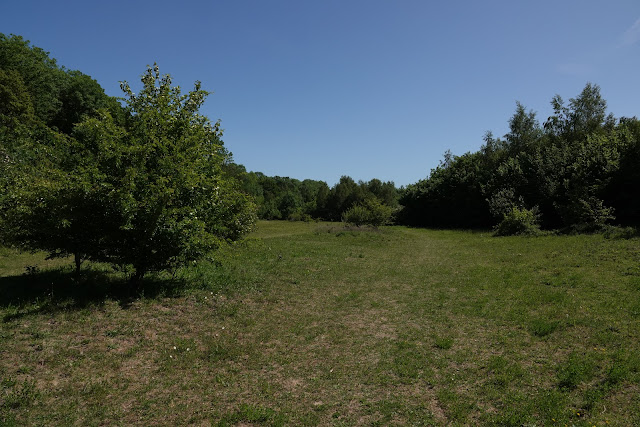 I came out on Bowesden Lane and walked up past some very large properties with even nicer gardens with me redesigning them (too many firs) as I went. 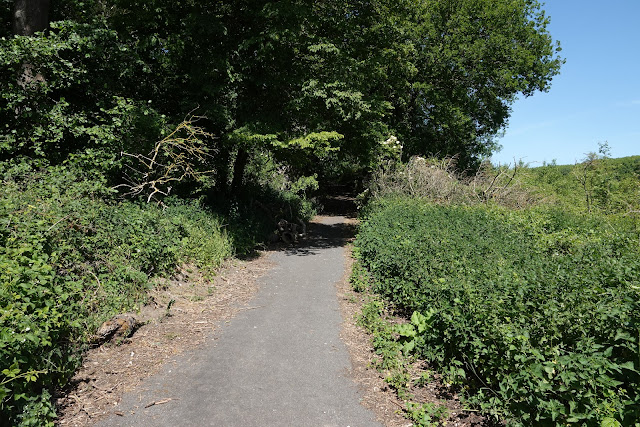 I spied some White Bryony growing along a fence line and thought to check for the Ladybird but instead I found Bryony Bee which was excellent.  At least six were busy attending the blooms.

At the Ridgeway I decided to strike out across the road onto another footpath and followed it down through some paddocks with Swallows, House Martins and Swifts for company before spooking a Buzzard from the hedgeline who mis-timed his flight into the path of two miffed Carrion Crows.


The Ash and Chestnuts in Starmore Wood alongside held the usual suspects but the path sides were lush with Brambles, Nettles and Great Willowherb and Bumble and Honey Bees were on almost every bloom. 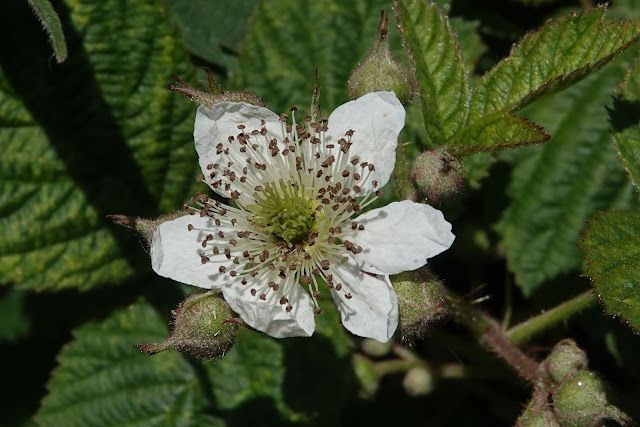 A few Eristalis intracaria and Syrphus ribesii were seen along with faded Andrena scotica and rather belatedly my first Green Longhorn moth (Adela reaumurella) of the season.


I was surprised at the lack of Skylarks from the adjacent wheatfields and spied a young Fox watching my passage with inquisitive eyes.


A line of old Willows hinted a  stream but it was mostly underground with just a little pool on the surface and so I followed it into Shorne and then up past the church and little byway with the most quintessentially old English Parish signs I  have  come across. 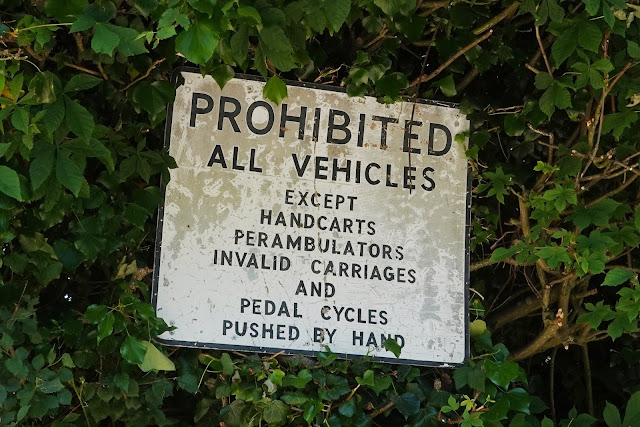 At the top I turned into the northern edge of Shorne CP which was slightly tricky due to the huge pile of flowers in plastic and a group of mourners. I politely asked if I could come through them and the gate that was so adorned. The scrubby piece of wood and paddocks was also dotted with wrapped bunches of flowers and beer cans.  It was all a little uncomfortable; like the whole section had been enshrined.


My path took me through a paddock with some very chunky horses who were most definitely with child and I said hello as I crossed to the adjacent gateway and into a narrow alley way through to Woodlands Lane and another entrance back into the country park. 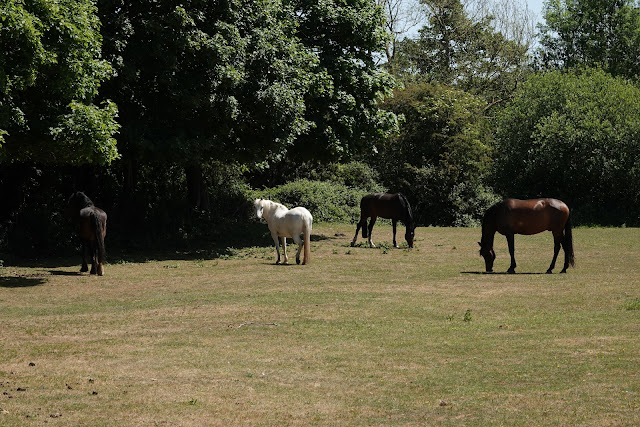 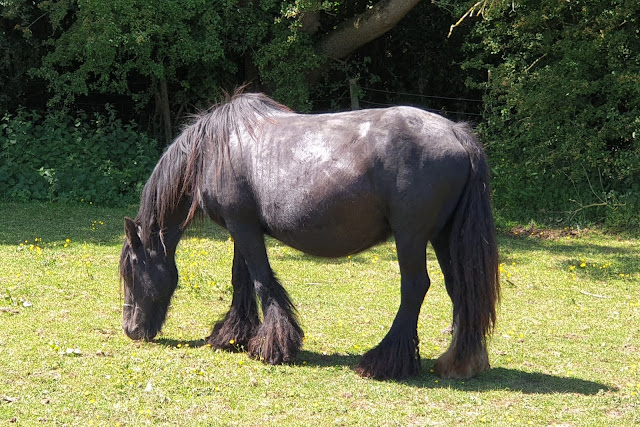 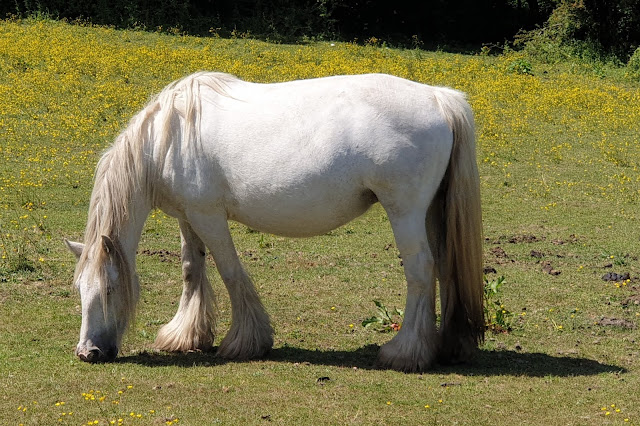 I had still barely seen anyone all day but that soon changed as I got further into the woods.  I was aiming for the fishing ponds and hopefully a dragonfly or two. 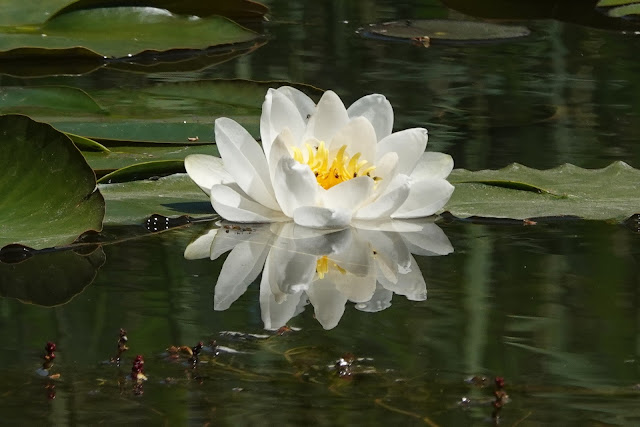 The view that greeted me was simply astonishing given the current situation. I know that restrictions have been somewhat relaxed but group gathering and social distancing is still very much in force but with the place was rammed to overflowing with big groups picnicking, playing football, getting beered up while fishing with all their mates and simply pretending that nothing has and is still happening.  It was like a Bank Holiday Monday minus the beach. Navigating a path through the throng was tricky as I made my way hastily towards the exit. Even that was traumatic as the huge car park was completely full with extra cars parked around the edges and others waiting for gaps and there was a queue waiting to get in and to use the single P&D machine. And it is a Thursday!

I left with a few minutes of Odonata for my troubles and cut down the dead end Park Pale back towards Crabbles Orchard and home and even here the cars were parked for about quarter of a mile so that they could walk back up to Shorne!


I rarely get angry but the sheer bloody stupidity of the British public seems to know no bounds. I would imagine that the same people will all be outside their houses tonight cheering and clapping for the NHS.


I think that I yomped the last three miles home from here with a right cob on as I did not take another picture until I reached my door...


Lunch in the solitude of my garden was enough to smooth my furrowed brow. 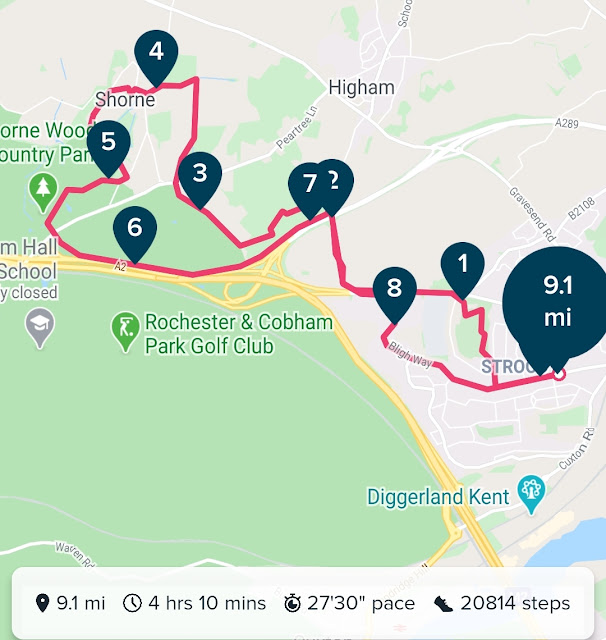