An afternoon trip between showers to try and see the male red-spotted Bluethroat that had been present at Holme for a few days.  After about twenty minutes it duly obliged and fabulous close range views were had as it fed on a path through the Sea Buckthorn.  It was moulting on the back but very smart on the throat.  After watching it for 45 minutes we headed for home.

[Eds: I do sometimes wonder if this sort of thing was actually undertaken by me.  I understand my desire to see stuff back then but why did I come straight back home? Why did I not got to Titchwell? All very odd especially when I have trouble persuading myself to go almost anywhere nowadays…]

A trip to North Norfolk with Paul W to see a Great Spotted Cuckoo but it had buggered off and the Honey Buzzards refused to fly. [Eds: I was obviously so unimpressed by the day that I did not even say where we went!]

10th-24th July:  Family Caravan Holiday to Cornwall – the last one!

No real birds of note other than Peregrine and Hobby but the Butterflies were very good with 22 species and a possible Pale Clouded Yellow too!

I have barely left the house this week; a complete change in the weather with dull, grey and yes, even wet days was my excuse but a general insidious apathy somehow crept back in once again.  I am never quite sure where it comes from but it just sneaks up on me.

It felt a little warmer this morning and I chucked myself out the front door at 9.30 to have a few hours out.  I should really be traipsing around some North Kent coastal marsh checking distant shimmery waders in my scope but as seems to be my default at the moment, I was lured back to the Downs.

I had Queendown Warren almost to myself and despite the cooler air and breeze it felt just warm enough for there to be a few insects on the wing.  The first sheltered section was actually alive with Meadow Browns and Gatekeepers with a few Whites and Common Blues thrown in.  The Marjoram was buzzing with Bumbles and Honey Bees and there were a few Eristalis hovers in attendance including delightful E intricaria.

Once up on the start of the slope I was pleasantly surprised to almost immediately discover a freshly emerged Silver Spotted Skipper which settled for a short while.  I wondered if it was a tad early. Brown Argus and a single Chalkhill Blue were seen and I kept my eye open for Melitta tricincta as there is plenty of Red Bartsia here and sure enough I found quite a few weaving in and out at ground level.  Because the flowers droop it makes getting a shot of one very tricky but eventually ne stopped for some ablutions!

There were also at least three Andrena hattorfiana on both the Small and Field Scabious blooms and I do not think I have seen them here before.


Rufous, Meadow and Field Grasshoppers were everywhere although they were not especially noisy but getting a good shot of the Rufous proved difficult as they kept burrowing into the vegetation!

Four ‘Mint moths’ were seen with Pyrausta aurata being the commonest with a couple of worn P purpuralis and singles of P despicata and P nigrata.  Oncocera semirubella zipped up from my feet and a couple were in full on Rhubarb & Custard garb.  There were many micros but most were brown (sorry) and I needed a tame Lepidopterist with me really!  I did however id Agapeta zoegana which is yellow!

There were a couple of Six Spot Burnet Moths around and I found a spent cocoon cases too.  Meadow Browns were the commonest butterfly but the slopes were not even remotely alive with wings and I counted just 11 Chalkhills in total and a single Marbled White.

There were no Autumn Ladies Tresses up yet and it was starting to feel like rain so I turned back.  The local Buzzard family were trying to encourage their young to come foraging for themselves rather than sitting around in the woods screaming for attention. There was the odd sortie but they were not really doing as their parents wanted.

I found another obliging Silver Spotted Skipper on the way back and risked the Dwarf Thistles for a better shot and at the same spot I also persuaded a Stripe Winged Grasshopper to stay on the path for a few moments too.  My first Painted Lady since late June was an immaculate beast as was the only Peacock I saw.

A last look at the main Marjoram bed where a Chrysotoxum festivum posed nicely along with Xylota segnis, Myathropa florea and a Volucella inanis which seem to be having a good year.  Eriothrix rufomaculata were on the Ragwort and a single Tachina fera was also seen.


Kite Tailed Robberflies were on the prowl and a solitary Bee tweaked a memory cell and I think it is Halictus rubicundus. A Comma was my last Butterfly for the site and the small Buddleia held only one insect and that was a  rather splendid Jersey Tiger.

From here I drove through the grey to Detling and The Larches where in theory the low light would not disrupt my potential botanising.  I was soon crouching down to get up close to the Yellow Bird’s Nest that were poking through the Beech leaflitter.  Only the ones with the Yew understorey were in good nick.  Those out just under the Beech Trees were pretty crispy and I suspect will not come to much fruition this year.


I could hear the Ravens above me and four scrappy looking birds spent my entire visit barrelling back and forth across the valley demonstrating their full vocal range. The Broad-leaved Helleborines had managed not to get scorched and I counted 69 flowering spires alongside the path in a bewildering array of colour and spire configurations.  Some were loosely spaced and others tightly packed and ranged from plain deep Burgundy through to pale pink and green.  Wasps (Norwegian I think but I have asked for help) were visiting the flowers and one had a heap of pollinia stuck 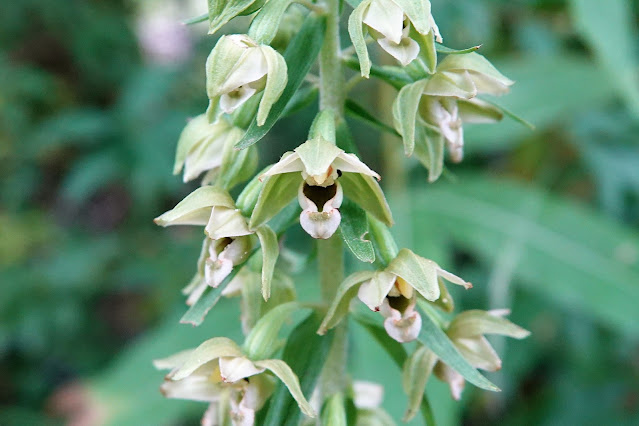 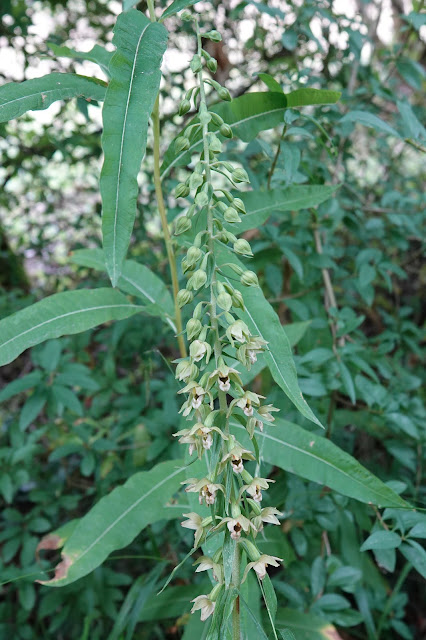 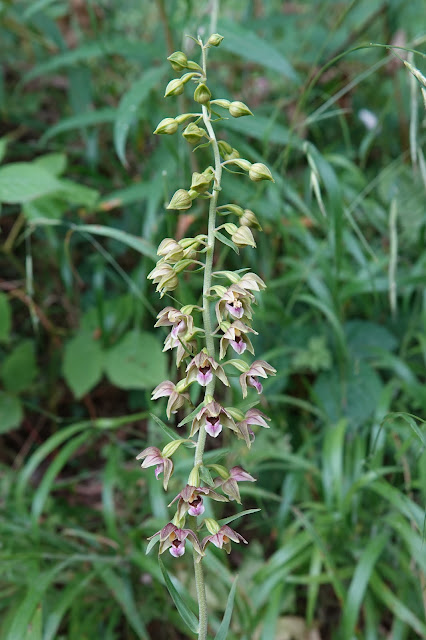 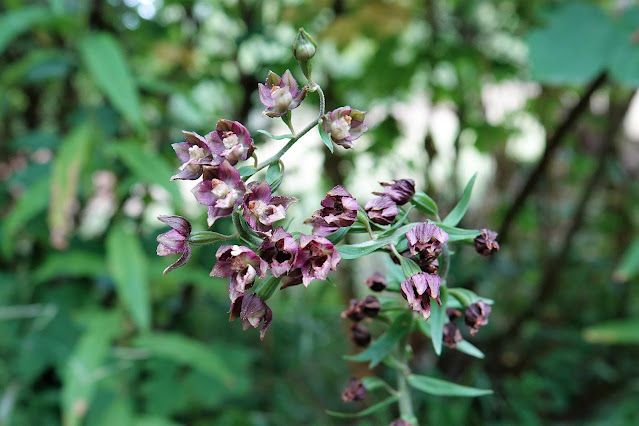 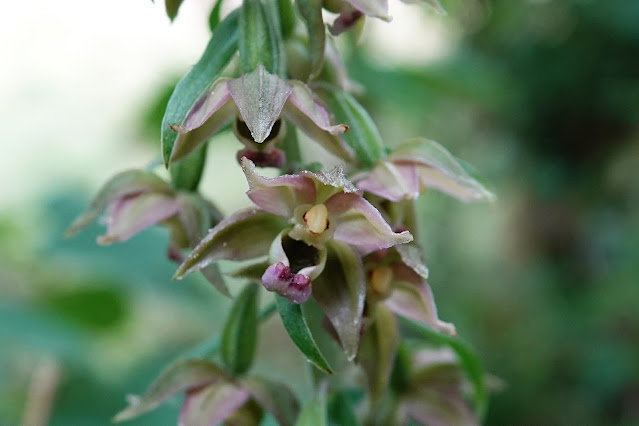 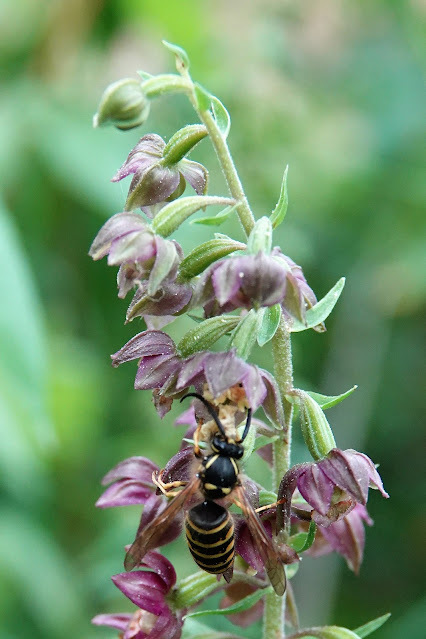 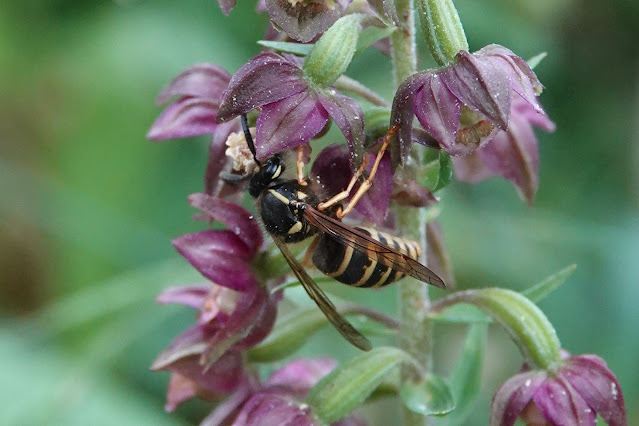 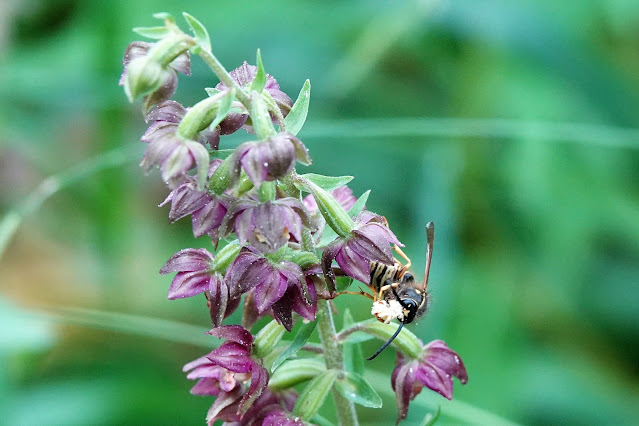 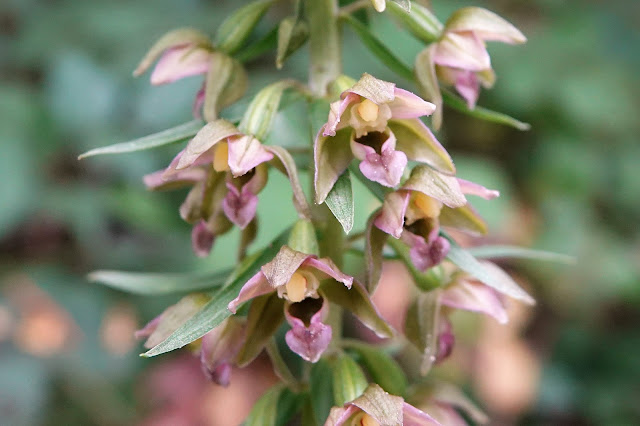 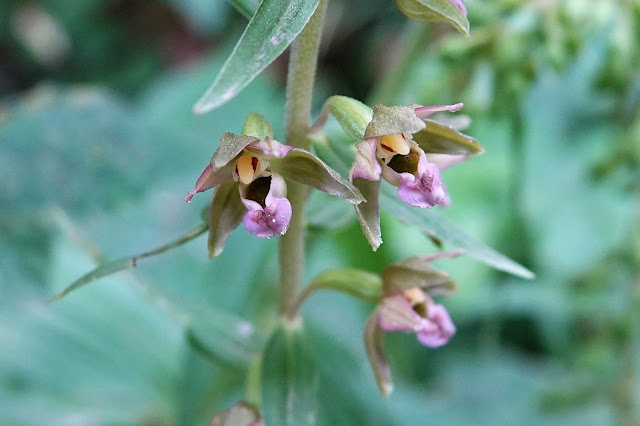 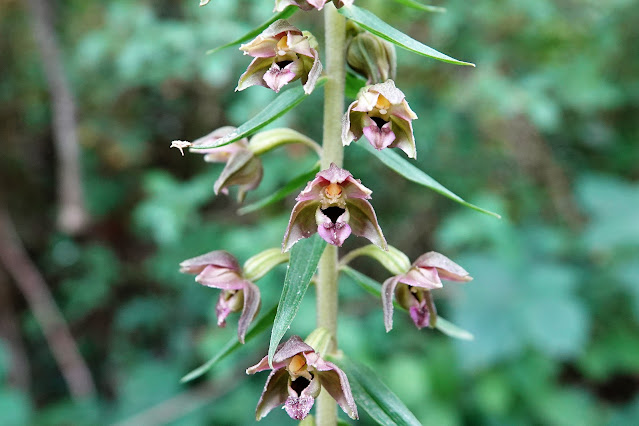 The meadow has been grazed and then cleared to the ground and was actually devoid of any life whatsoever so I retraced my steps and spent some time I the path verge where a Rufous Grasshopper appeared on my leg and a Dark Bush Cricket in the middle of the path.  A female Long-winged Conehead was still not fully mature (no wings) but had the diagnostic sabre for an ovipositor.

A Speckled Wood was the only butterfly I saw here and a Xanthogramma frustrated me as I could see the collection of yellow spots on the side that would help point to X stacklebergi but I could not get a pic but imho the upperpart short that I got feels good with restricted dark wing patches and very narrow body stripes but hey ho.

But just a few feet away a Conopid flitted up in front and I was distracted from my Hoverfly frustration - Physocephala rufipes.  Any Conopid that is not Sicus ferrugineus is always a bonus!

From here I cut back to the west side of the Medway to go and have a look for Violet Helleborines between Snodland and Vigo.  It was very dark in the woods but it was worth the walk as I found quite a few fine flower spires including one that seemed to lack almost any pigment other than greens but it could have been the light.

Like at The Larches several Wasps were attending the flowers but I was surprised to also see several Baccha elongata Hoverflies also disappearing into the individual flowers although being so slim that were not connecting with the dangling pollen sacs and just got a free drink. 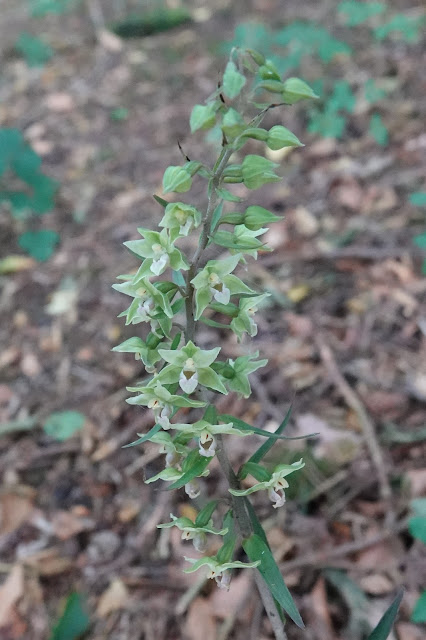 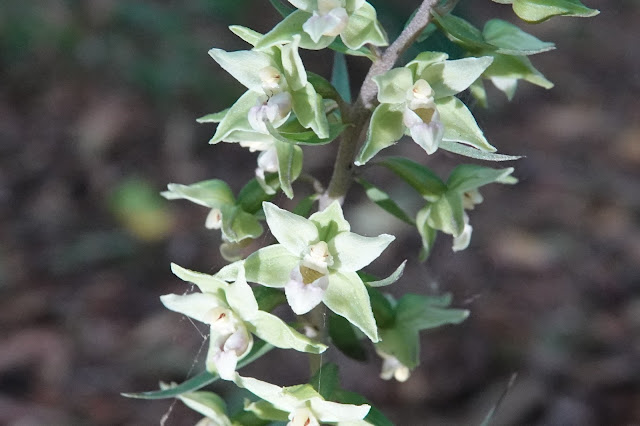 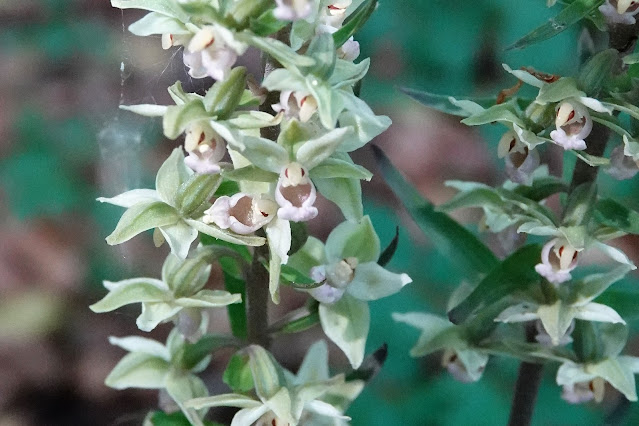 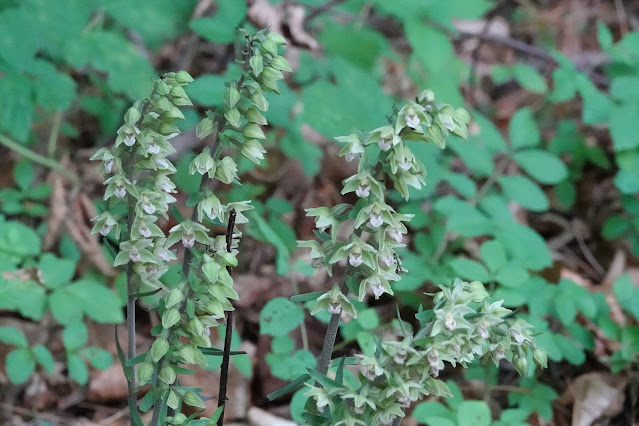 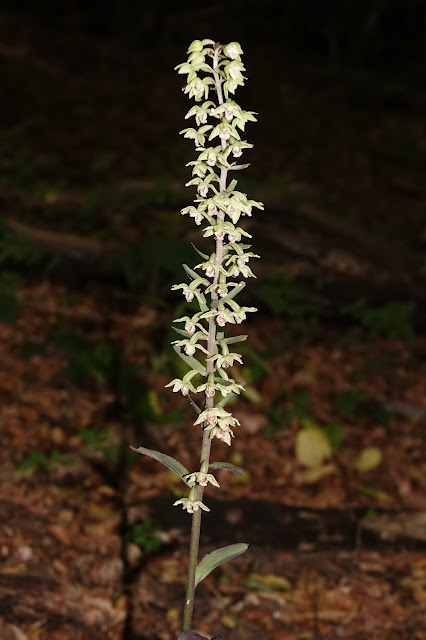 The meadow just outside the wood was looking fabulous with huge tall skinny Thistles (sorry Enid!).  There were a few Meadow Browns and Gatekeepers and a lone Chalkhill Blue was a surprise while a female Silver Washed Fritillary was seen on an unapproachable Buddleia.

Field, Meadow and Rufous Grasshoppers were here too as well as my first Speckled Bush Cricket of the day and three more Six Spot Burnets.

I called it a day at this point and wended my way back through the lanes towards Great Buckland and Luddesdown.  It is a lost world down there of tiny roads, blind corners, odd big farm houses, others that look like they have been made out of pallets with skewwhiff windows, horses of every size and more fledgling vineyards than I ever imagined with regimented lines of bright green vine guards stretching into the distance across otherwise barren ground.