On Friday I took Barry Jones for a walk around my Ranscombe patch. It was not overly warm but there was just enough sporadic sunshine to tempt out a few insects on the way.

We started in the main car park as I neglected to have a good look on Tuesday and was pleased to see that they Nettle-leaved Bellflowers were now out and swaying I the breeze.  There was plenty of Field Scabious but no Andrena hattorfiana in attendance yet.

I took us through Longhoes to show off the Broad-leaved Cudweed, Vervain and Long-stalked Cranesbill picking up a few flies and regular butterflies on the way. 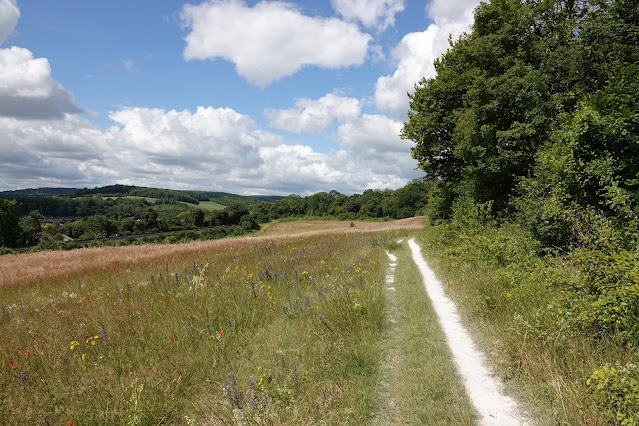 We cut up into the Valley where the fields were even more yellow than earlier in the week and we stopped on the way down to check out the Hoverflies and Ectemnius wasps attending the Hogweed.  A huge dark Crab Spider Xysticus bifasciatus was found lying in wait for breakfast.  It was the same size as Misumea vatia of which I found a bright greeny yellow female on some Scabious.

We were drawn into the Monet style flower haze of The Valley where the lilac of Creeping Thistles has now joined the palette and clumps of tall super soft Perennial Sow-Thistles formed blocks of deeper yellow amongst the paler Bristly and Hawkweed Ox-tongue.  I never tire of seeing this landscape. It is just a pity that it is now so rarely encountered elsewhere. 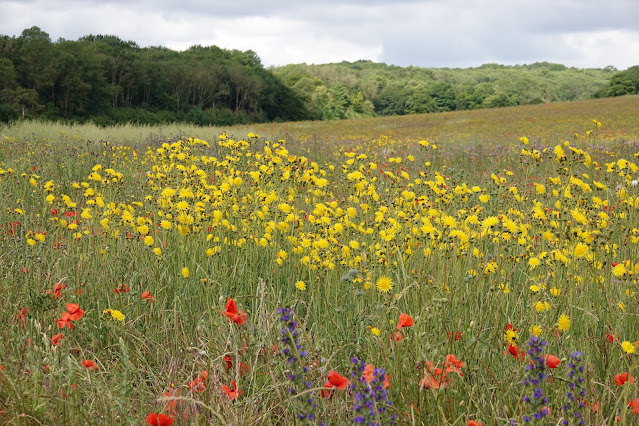 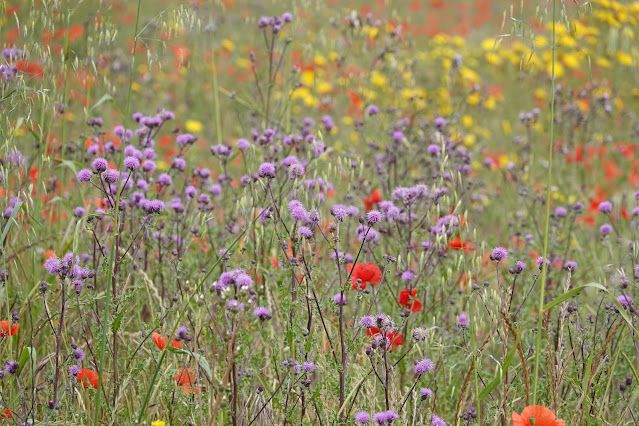 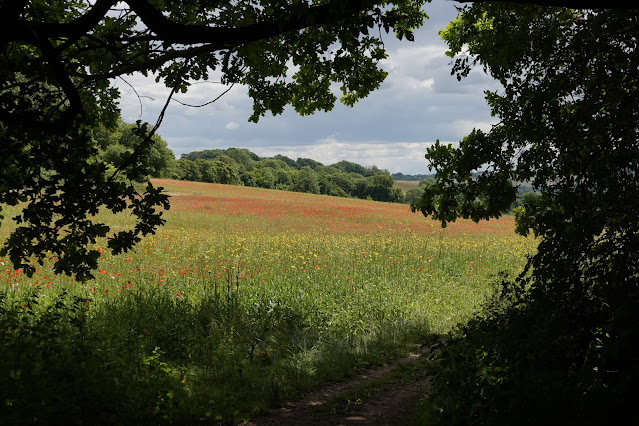 Our route took us to the little chalk meadow up on the ridge by Mill Wood where the Hemp and Common Agrimony were both in flower although in starkly different forms and I was happy to find a single Clustered Bellflower already in bloom.  Marbled Whites skipped around us along with a few Browns and Skippers.

The path through Mill Wood was quiet with much of the same flora but with the addition of Hairy and Perforate St John’s Worts before I dropped us back down to Kitchen Field via a little clearing with Wild Strawberries and our first Silver Wash Fritillary.

There was still one flower on the Corncockle and I found Wall Speedwell and a tiny Venus’ Looking Glass on the walk up to lunch on the bench bat the top.  A Brown Argus and Small Heath were added and an Emperor Dragonfly cruised around.

We showed a couple of botanising ladies some of the immediate specialities before continuing up and into the woods. Once we had crested the rise there we spied a dog Fox on the path in front.  He looked at us and trotted closer before veering back off into the verge.

Meadow Browns and Ringlets were in abundance and being quite cool were often sunning with wings open along with Red Admirals, Comma and all three Skippers.  A White Admiral cruised in abut as usual did not linger.

Dark and Speckled Bush Crickets were found and a superb Anthophora furcata came in and conveniently showed of its ginger bum.  There were many Wolf Spiders with sacs and I think they are Pardosa saltans (well no one has ever told me otherwise!) and several large Nursery Web Spiders, one of which tried to catch a very tatty Marbled White Spot (cheers Antony).


I had chosen this path to bring me out near my Master Oak but the sun was in and out and I was dubious as to whether anything may appear but we had only been there two minutes when Barry picked up one if not two Emperor butterflies power gliding around the canopy!  We waited until the sun popped back out but had no more sightings but at least they are once again a feature of my local patch.

Pleased with this little slice of luck I dropped back down the ridge passing my bee bank on the way where lots of Colletes were in attendance (thanks Grant) before getting back to the farmland where Skylarks sang.

The Bramble edges were once again superb with both Xylota on the leaves along with a few other flies and Roesel’s Bush Crickets were amongst the Meadow and Field Grasshoppers. A White Admiral came down and actually stopped for a warm on the Bracken and allowed a close approach and Commas were very numerous and vibrant.


I rescued a Summer Chafer from the path and down at the last of the flowering Rough Mallow I got to scrutinise a couple of Xanthogramma that I am sure were both X.pedissequum.


From here I followed the same route back up to Merrals Shaw as on Tuesday adding a furry legged Lasioglossum xanthopus and a couple of calling Bullfinches before we got back to the car after a successful amble. 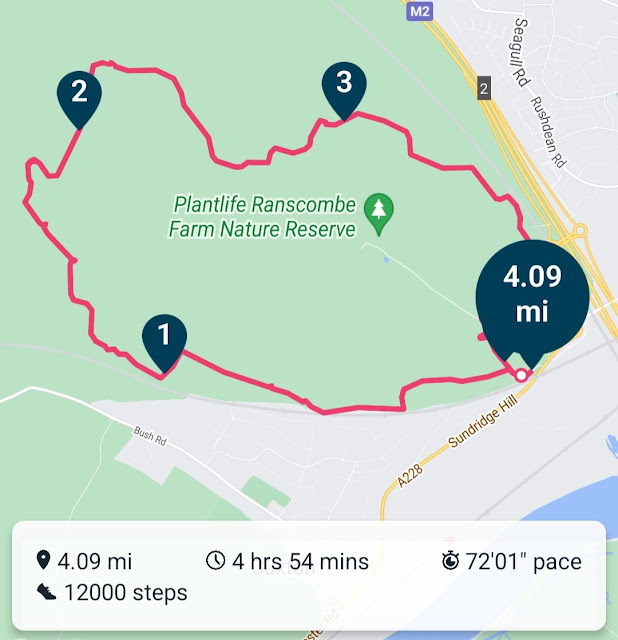