Max and I left home in thick fog which followed us on our journey down towards Dungeness and despite almost causing us to miss out on some Golden Arches (not a moth) breakfast action it miraculously lifted just a mile from Lydd to reveal glorious blue skies without a breath of wind.


A Barn Owl drifted by as we walked down and Chiffchaffs and Cetti’s were vocal while a Greenshank invisibly tew tewed at us.

It was an idyllic if somewhat hazy view from the Hanson Hide but there was plenty to seen with a smattering of waders that included 12 Little Ringed and a solitary Ringed Plover, six Dunlin, six Snipe and three tiny scuttling juvenile Little Stints. There were no Great Whites and so we ambled back to the sound of over a hundred Greylags honking overhead.


Before we even reached the sea we had notched up about a dozen Wheatear and a good wander around the lighthouse area raised the tally by another ten along with a couple of shiver tailed Common Redstart, a Willow Warbler and several flyover Yellow Wagtails.

The sea was very disappointing with not one tern on the Patch and just a few Sandwich and Commons milling around further out where the Harbour Porpoises were frequently surfacing. Eight Shelduck headed west and a Black-necked Grebe was slightly surprising as it bobbed by. 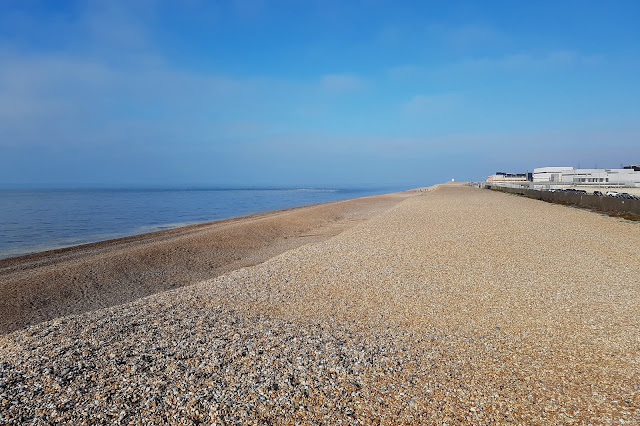 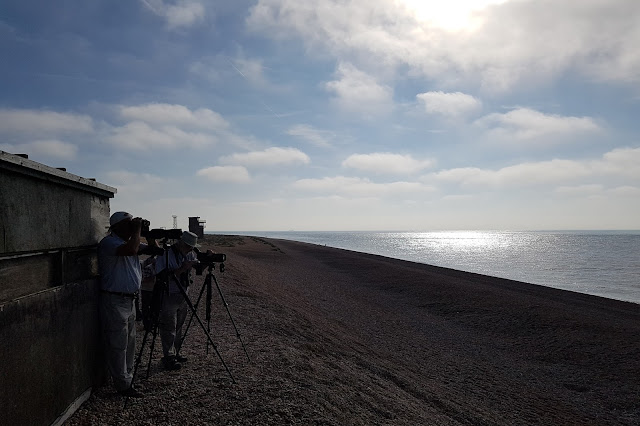 A potter inland to the Obs produced much crunching of gravel along with 12 more Wheatear, two Whinchat, Stonechat and a couple of Willow Warblers and Whitethroats. 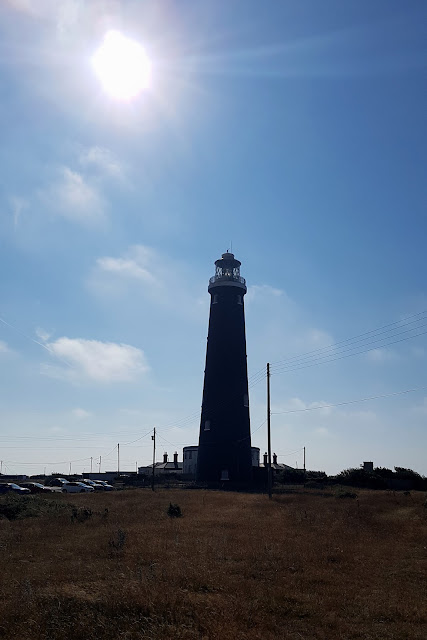 I did not look too hard for the two rare crickets that now reside here but I was fortunate enough to find a Grey Bush Cricket sat right out in the open which is the first time I have ever got a good look at this large winged species.

Max had had a look at some moths in the Obs as well as seeing his second Hummingbird Hawkmoth of the day but nothing different on the bird front so we retraced our steps to the Reserve for our regular circular walk.


It was quite hot by now but we persevered and collected a nice array of small waders with Ruff, Curlew Sandpiper, eight LRPs, 6 Ringed Plovers and a couple of Redshank while a smoky juvenile Black Tern dipped circuits over the middle of Burrows. Two Great White Egrets were seen poorly on here and another lurked (and loomed!) over the back of Denge Marsh where Common Terns were still feeding young and Beardies pinged. 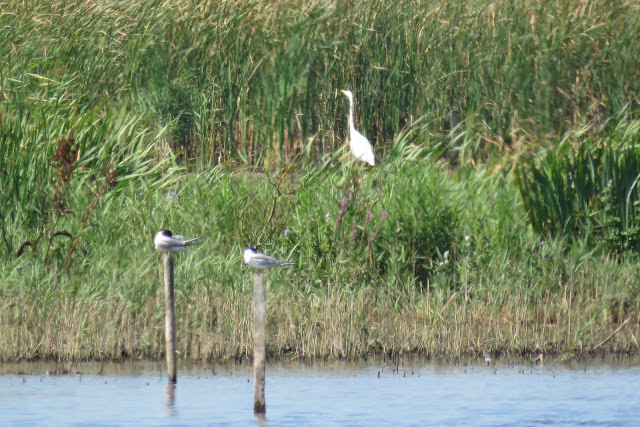 Lunch saw us on the last leg of the walk but we were slowed down by a lovely patch of Fleabane covered in Coppers, Blues, Torts, Bumbles and Flies. There were several common hover species along with the hulking Norwikia ferox – a tachinid of great size and spikiness.

Lunch and then up to Oare Marshes for the late afternoon and despite the tide being well out, it did not disappoint with over 1000 Black-tailed Godwits and Redshank still loafing around along with Avocets, Knot, Dunlin, Little Stints and Curlew Sandpipers to name a few. About 200 mixed Golden Plovers erupted at the distant passing of a male Peregrine and the air was filled with those plaintive calls that so remind me of winter days on the Essex coast. Yellow Wagtails and Starlings were coming down to poke around for flies on the exposed mud surface and a Water Rail was calling quite incessantly. 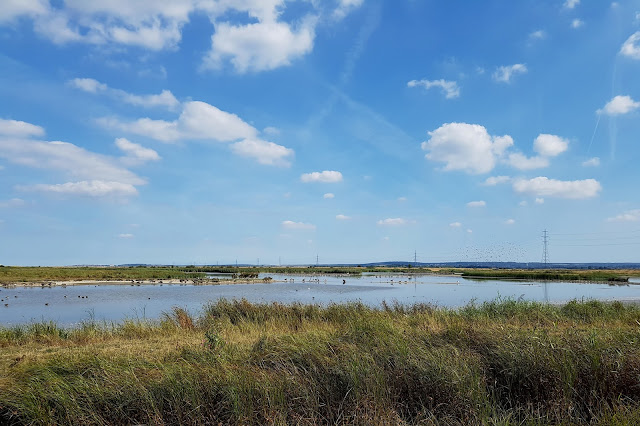 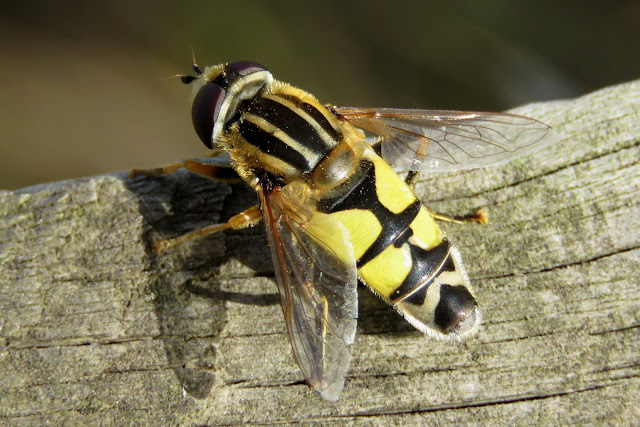 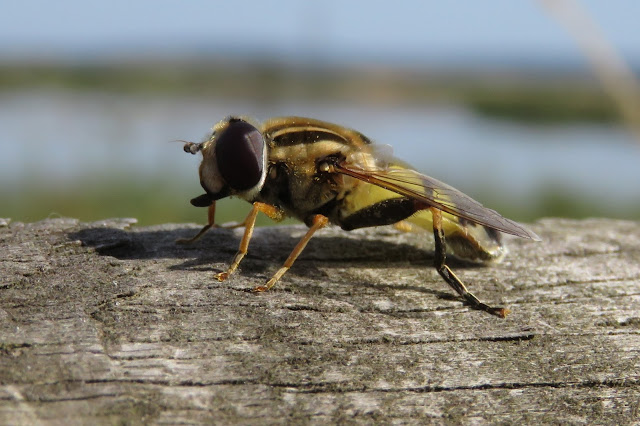 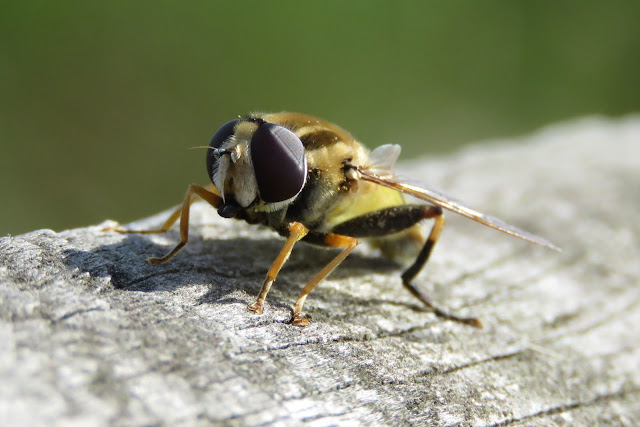 There was no sign of the Bonaparte’s Gull so we headed for the Swale and a check of the mud. Amazingly I found this now winter adult almost immediately and it showed very well on the flats as it delicately paddled around with the Black-headed Gulls. 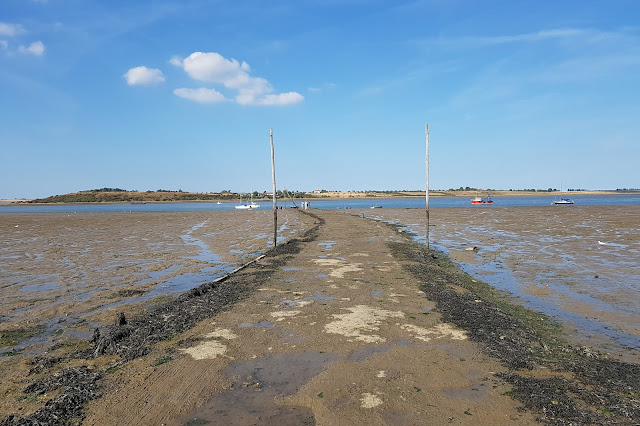 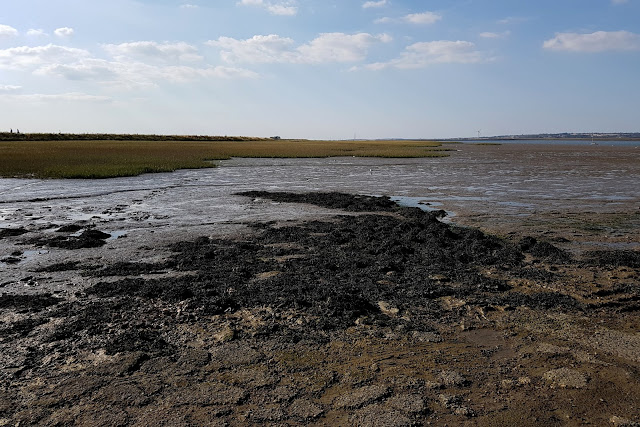 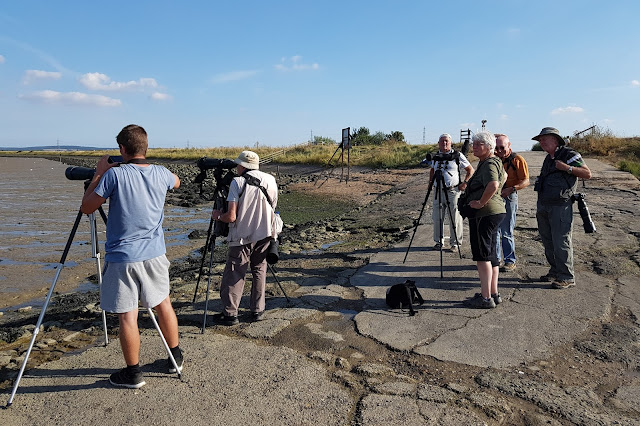 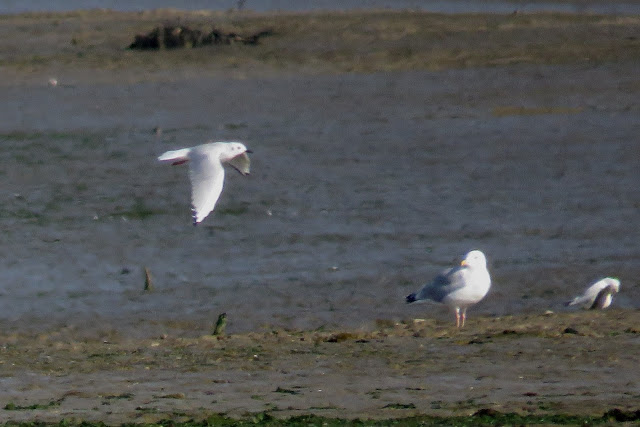 Black-bellied Grey Plovers and russet Barwits lined the north side and three more Little Stints tried to have a kip in a tiny runnel. With a last look at the gull we called it a day and escaped from the sun after filling up our water bottles from the beautifully cold aquifer.  Time for home...
Posted by Howard Vaughan at 13:37 No comments:

I set the alarm for 0550 and managed to stumble out once again for a final perambulation along the Tsiknias and through the pans. For the first time this week it was warm, still and cloudless with Sol rising speedily from behind the hills as if to say ‘Kaliméra kai kalí antío!’ to send us off in style. 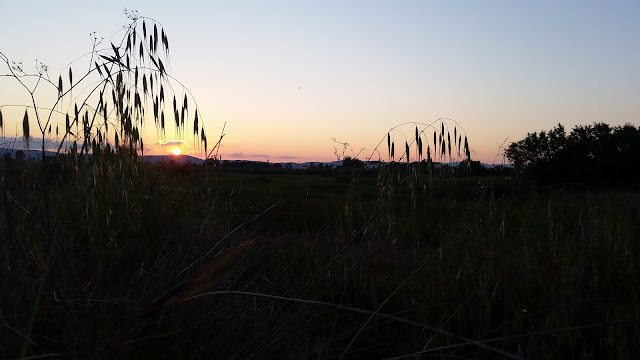 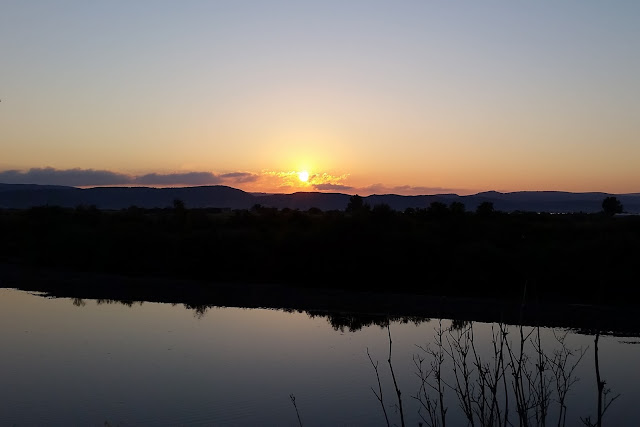 I spent a quiet hour walking the east side of the river above the ford and although I did not see that elusive Great Snipe, I was treated to a superb dawn chorus of Nightingales, guttural Great Reed, Cetti’s and Eastern Olivaceous Warblers, Corn and Black-headed Buntings with Hoopoe and Bee-eaters as a backdrop. No less than six Little Bitterns dotted the riverbanks like orange beacons and a white-winged Squacco drifted off after being disturbed by the tethered goats. There was a scattering of Wood sandpipers and a Purple Heron double backed behind me while a lumbering hippo delighted me by becoming a lovely dagger billed Olive Tree Warbler at just a few feet range in an pathside olive.

There was still a trip tick to be had in the shape of a fine drake Shoveler that was dabbling with a drake Mallard. It has been around for a few days but I had not caught up with it until now. Not a Lesvos tick for me but a great Island bird none the less.

The pans looked fairly quiet so after taking some arty ‘Flamingo in the sun’ shots I came back through Lotzaria passing two Temminck’s Stints with four Littles on the Pumping Station Corner and at long last managed to get some nice shots of the ubiquitous Corn Buntings and even an Olly. 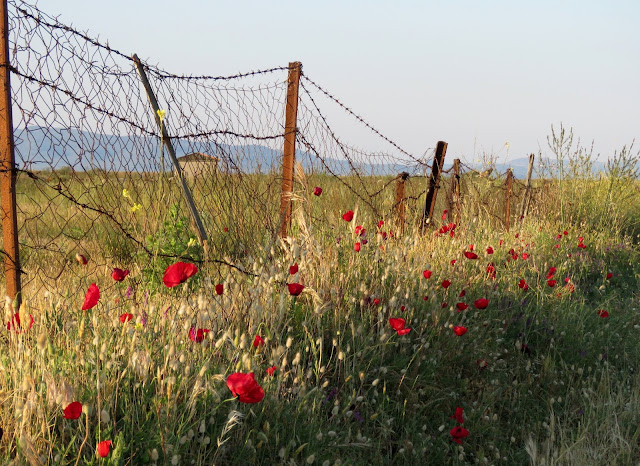 Breakfast beckoned and there were jobs to do so I headed back and by just after nine we were ready to go so we wished those staying for longer, a bird filled trip and said our farewells to the lovely Thekla Koukourouvli and Stella and Thekla’s always smiling Dad. With time to spare, Lotzaria called once again and the ford was traversed for definitely the last time this trip with a male Little Bittern patiently stalking tadpoles in the grass. A final look at the ‘mingos and then off to Kalami where some Black-winged Stilts and Little Egrets still fed in the lush wet pools and up above five Black Storks circled and an ‘interesting’ Buzzard seemed to have a lot going for it in the Steppe Buzzard department which would be a very nice way to end another magical two weeks on this most beautiful of islands. 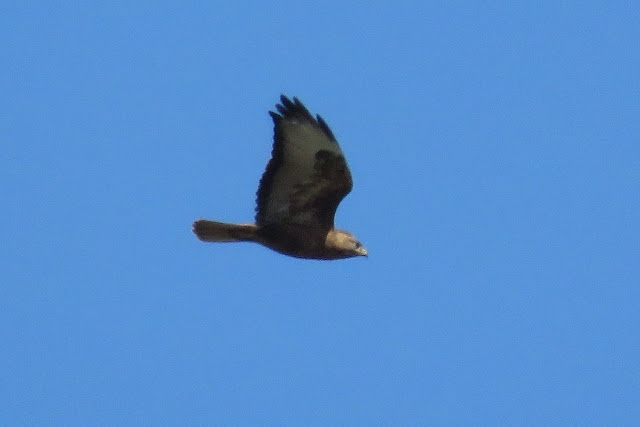 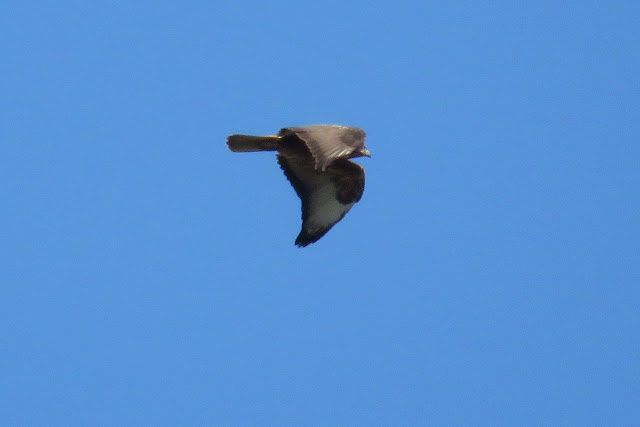 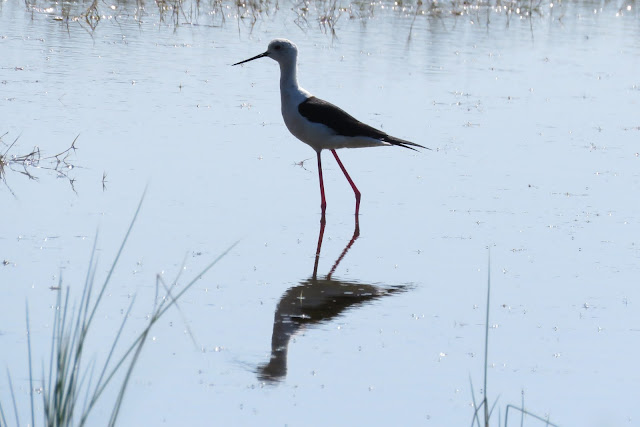 Lesvos and its people are going to find it a difficult year on an island with almost no incoming tourists to generate income and work but as I suspected before I came out, there was very little to suggest that there had been a huge influx of displaced people and absolutely no change in the relaxed, safe and welcoming atmosphere that the Lesvos people are able to offer to those willing to come and stay on their enchanting island. Good birds, good food, great people... what more could you ask for? 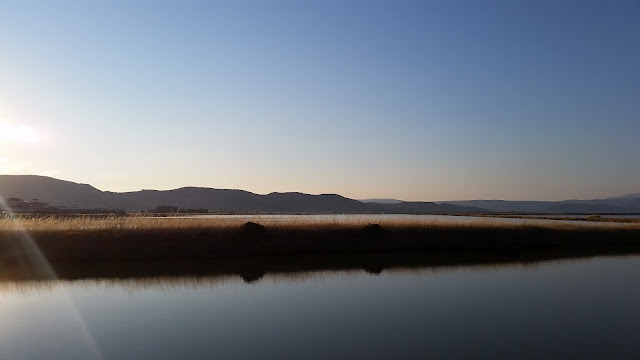