Yesterday was my Mum’s birthday and with the weather kind it meant that a soiree with them in the Ilford garden was on the cards with fish ’n’ chips for lunch and homemade meringues, cream and lemon curd for afters...

I shed several layers for the first time in days and was able to spend some time papping insects that were coming to the garden which is far more flowery than my own at the moment. 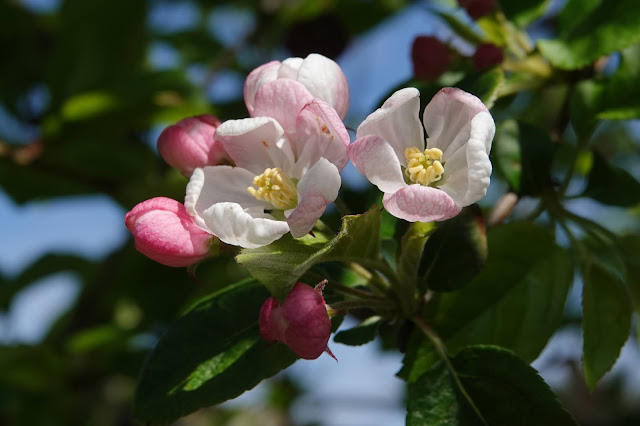 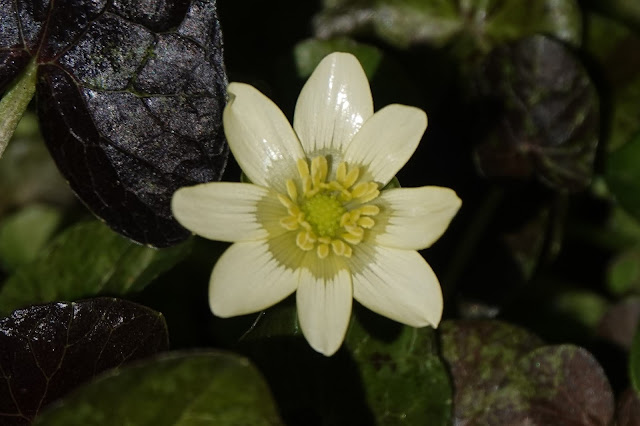 The Anthophora plumipes were still attending the Pulmonaria with several males and females darting around but persuading them to stop was as tricky as ever. A couple of Andrena flavipes were seen along with a smaller chunkier species as well as Bombus terrestris and hortorum. A solitary Honey Bee came down to drink from the bird bath.


There were plenty of flies to follow and I found eight species of Hoverfly along with some plump Calliphora and my first Lucilia Greenbottles of the season in all their shiny glory.

I also saw several Playtcheirus albimanus and a definite Syrphus ribesii female. A single Scathophaga would appear to be S furcata (better pics from my own garden today) and a little Picture Wing Fly turned out to be Tephritis formosa whose larvae feed on Sow Thistles.

What was odd was the complete lack on any Butterflies whatsoever but I suspect they were waiting for today when I was not there.

I was good to be back amongst family. 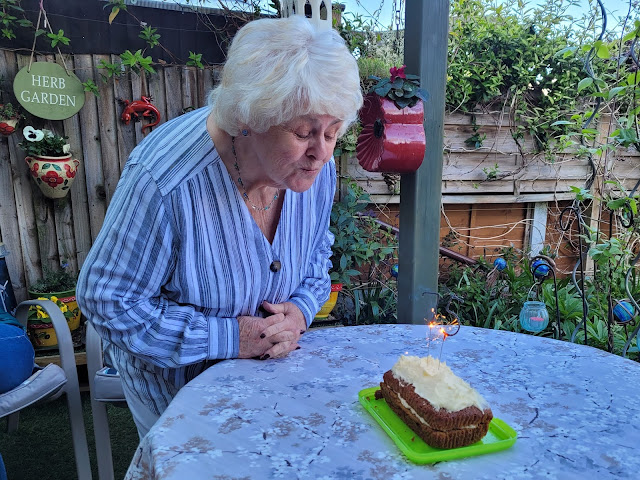 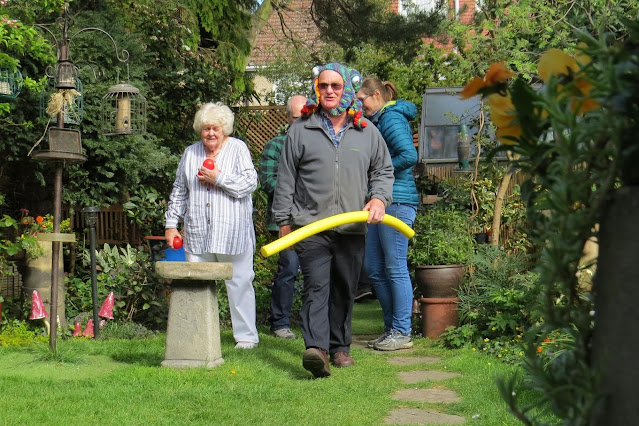 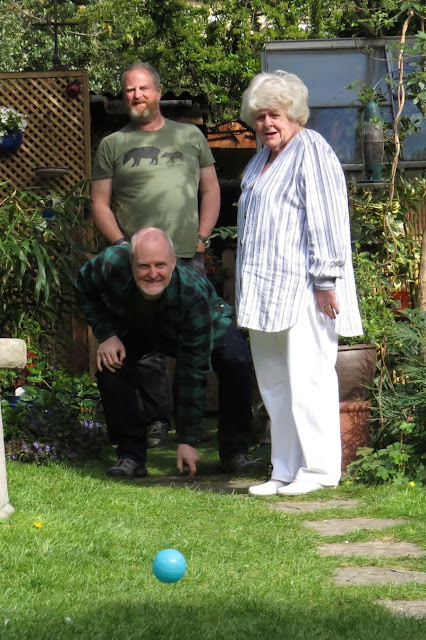 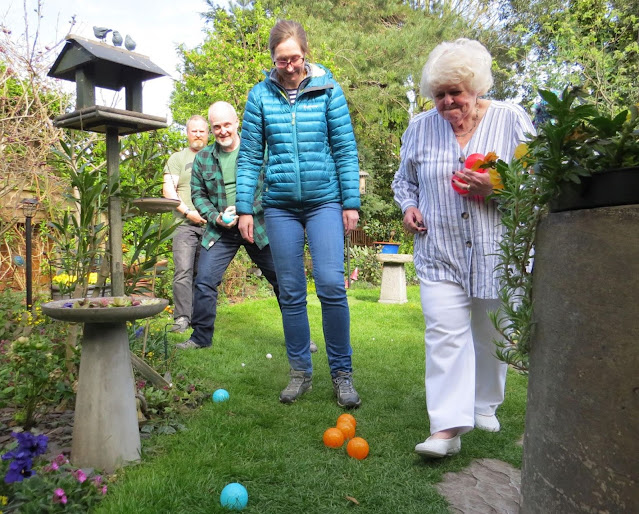 And so to today and an adventure in the farmland of Essex to visit a site with Emma S that has already been doing great work.  The plan (according to my email!) was to meet at 0800 at Berwick Hall Farm just north of Abbess Roding and as such I left home at 0540 to guarantee getting around the M25 to the A12 junction before anything untoward happened.

As it was I just managed to get off as the queue ahead signs flashed up in the fog. The motorway became a car park shortly after that. I gingerly wound my way up past Weald Park where I could just see the Fallow Deer near the road before reaching Chipping Ongar and the through Shelley and Fyfield.  By now I was way too early so I drove to Abbess Roding church and parked up for a coffee in the murk before heading out for a little walk. 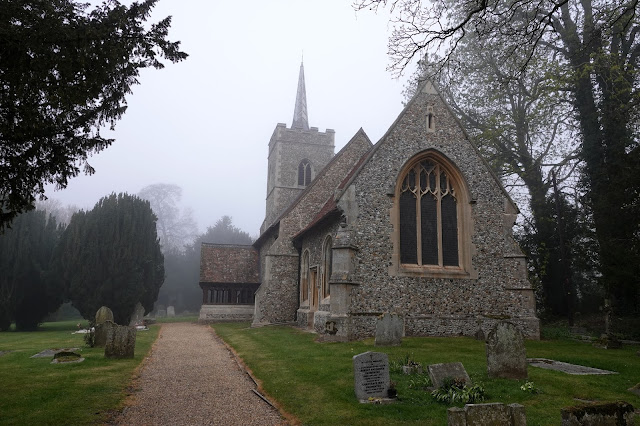 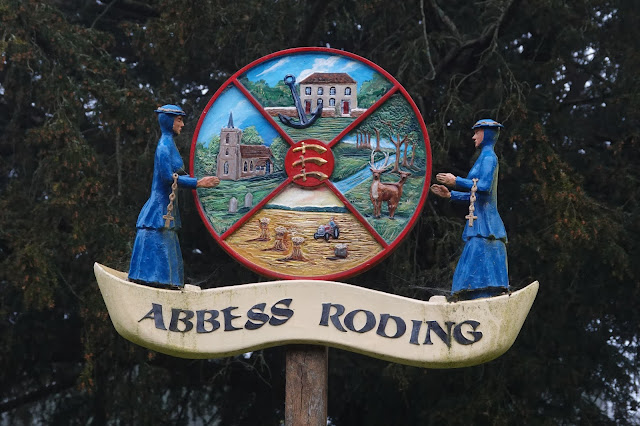 The thick mist was making every bird sound  loud and resonant and the small Rookery (28 nests) between the Church and the Hall was particularly noisy.  Three thrush species were in song and I could hear Nuthatches and Bullfinches in the big gardens and Great Spotted Woodpeckers were drumming somewhere not too far away. 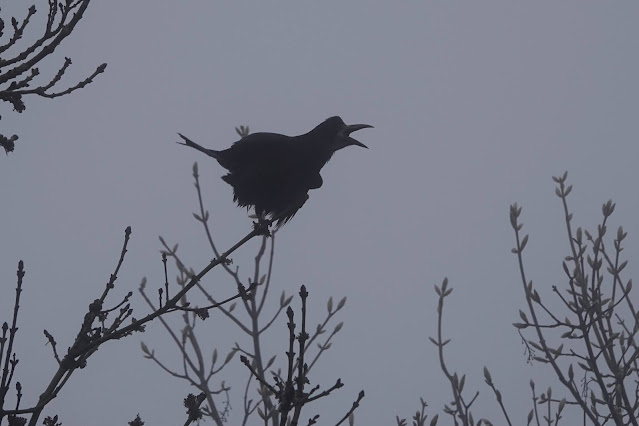 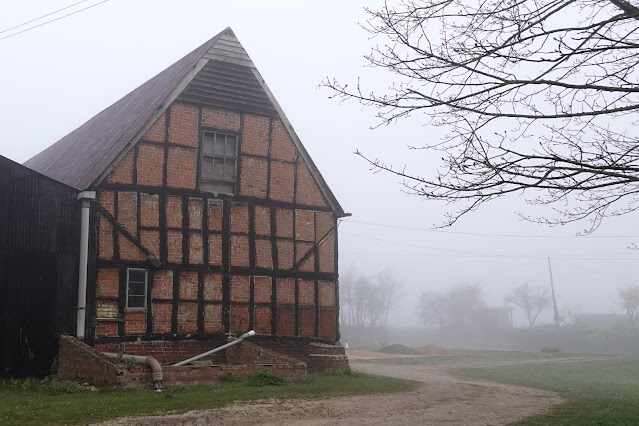 I looped around the back of the hall and found two ghostly Canada Geese in a field along with a Mistle Thrush that appeared the size of a Crow before ambling further up the lane a ways.  Two male Yellowhammers were weakly singing around an invisible field edge but no Skylarks were up at this point.

I was chilly and damp so I did not linger long before driving the short distance to the meeting spot where I soon discovered from Ian the farmer, who came out to say hello that my 0800 rendezvous was infact at 1000 and so he left me to my own devices and I decided to head out and explore the lanes and footpaths for the next couple of hours until Emma arrived.

Wych Elms were in full seed and Yellow Archangel, Honesty, Cowslips and Primroses were along the verges but the visibility was still next to nothing and I could not even see the sheep in the field alongside the road despite the bleating and sheepy odour!


A buck Muntjac watched me from an immaculate garden lawn with the smug grin of one who had circumvented the deer fence designed to keep him out and two more male Yellowhammers were seen before I retraced my steps and headed the other way off towards White Roding.  I took the first footpath north and looped in an anti clockwise direction towards White Roding windmill and then down towards Snow Farm and Anchor Lane before getting back to the car with some time to spare. 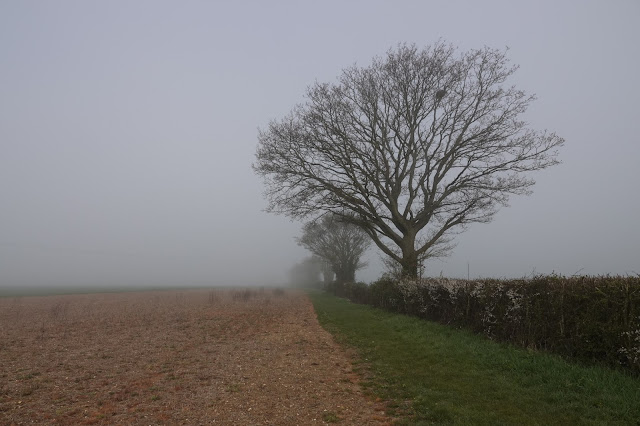 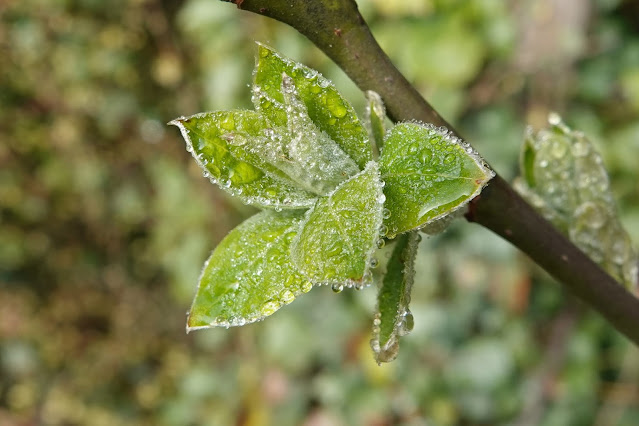 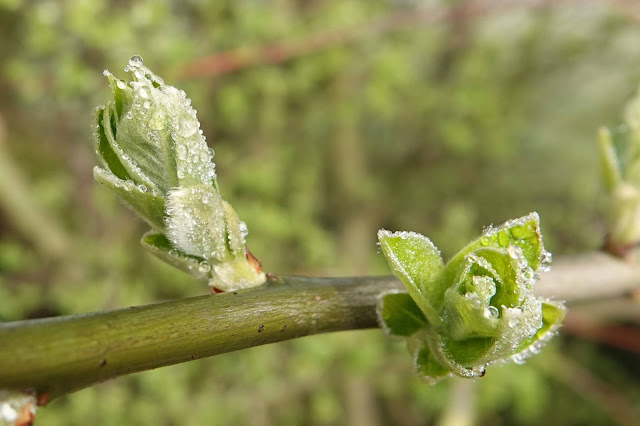 Most of the route was through Wheat, Barley (I think) and Oilseed with hedges in various states of existence from flayed and broken to boxed and topped and much to my delight even some sections of South of England style layed. 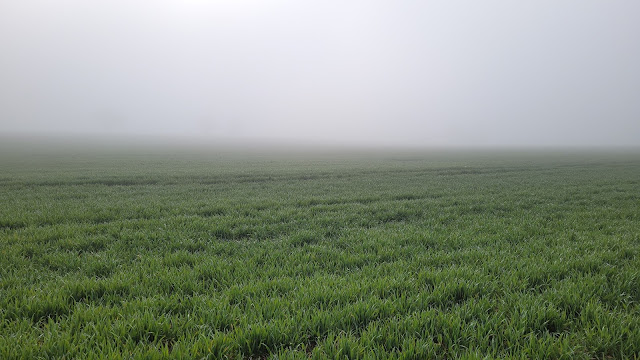 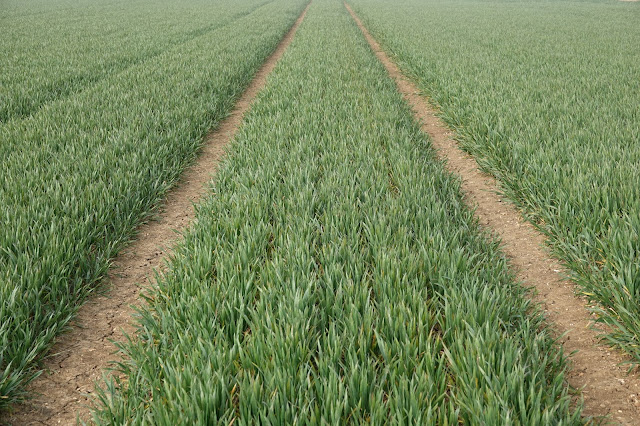 As the sun started to burn through bird song increased and I quickly became surrounded by Skylarks and a steady run of singing male Yellowhammers and I encountered 13 additional birds.  There was the odd Blackcap, Chiffchaff and Whitethroat and I was very pleased to see two Grey Partridge rocket across a field just after I had heard them call.

A fine Brown Hare lolloped through a Wheat field and occasionally stopped to watch the world and a male Kestrel did likewise from a tree top. 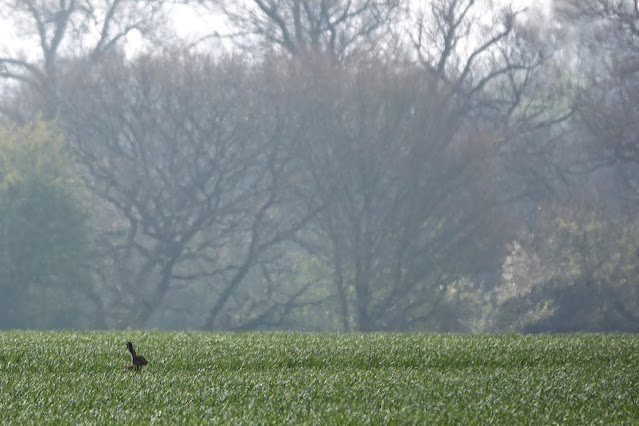 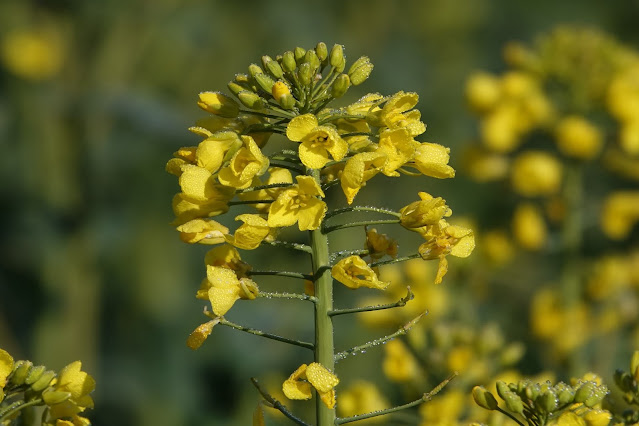 My subsequent walk around with Ian and Emma was most educational and we headed down to the River Roding itself through the fields with their lambing ewes to look at some Turtle Dove plots where birds have been seen in recent years. The Roding is almost leapable at this point but was running clear and fast. Song Thrushes, Willow Warbler, Chiffchaff and Blackcap all sang and it felt good for Nightingale too. Ian had not seen Yellowhammer before so it was good to find two more territories and get a fine yellow headed male in the same view as a bonus male Reed Bunting. 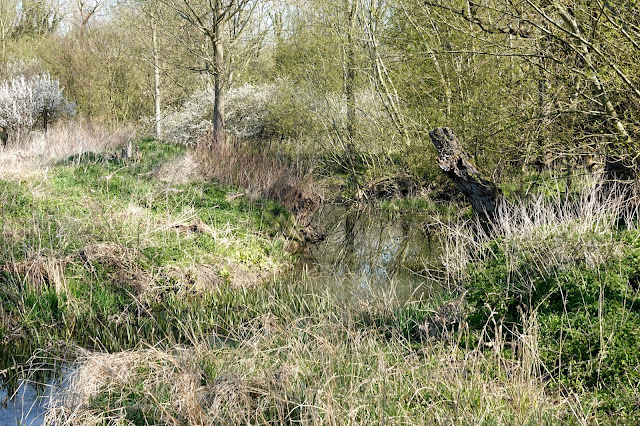 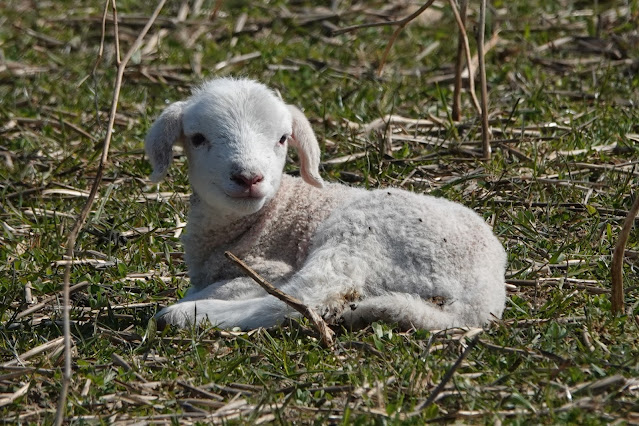 Lesser Redpolls, Linnets and several Yellow Wagtails were seen and up above, the ‘see them everyday’ Red Kites and Buzzards circled – how things change. 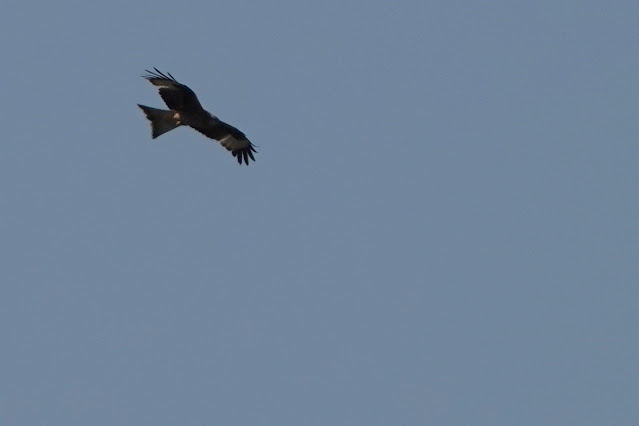 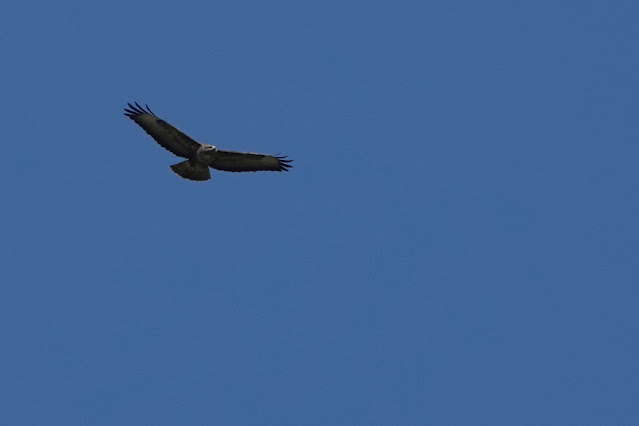 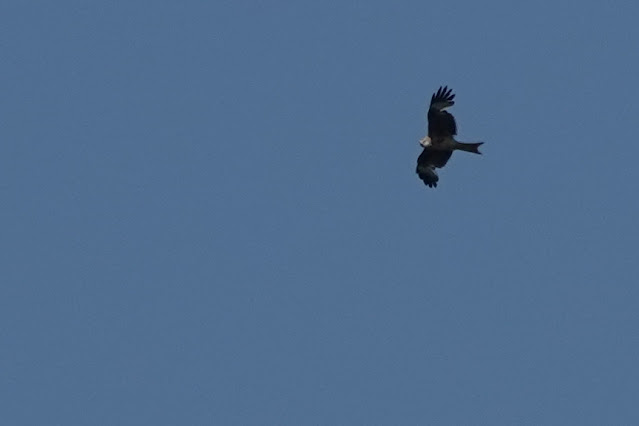 It also contained a Starwort and Crowfoot species interspersed with richly coloured Water Mints spikes that you could smell in the warming air.

Ian was very keen to make his farm better for wildlife and seemed eager to know the names of everything I was looking at so I hope that ‘my’ project farmers down near Rainham are equally enthusiastic.

I came home with buoyed spirits and spent the early evening in the garden tinkering, watering and chasing around several interesting flies – as you do...

Posted by Howard Vaughan at 14:45 No comments: