A day out in Sussex with Peter G that started very well near Arundel at the very pretty Swanbourne Lake where an immature drake Blue-winged Teal lurked at the back with a small group of Gadwall and a lone Ruddy Duck. It was fully winged and unringed and apparently not from Arundel WWT just up the road. It was shy and wary and a welcome year tick although I suspect many people will not even bother going for it.

On now to Church Norton where the weather conditions deteriorated to squally, very windy and cold. Waders and ducks were everywhere and there was a good mix of Mergansers, Goldeneye, Great Crested and two Slavonian Grebes.  It was too windy for small birds and so after lunch and coffee we headed north to Staines Reservoir where quite a lot had been present. When we got there the temperature dropped and rain was imminent although when it arrived it fell as whopping great hail stones which stung painfully. However a small cluster of birders were on the causeway and soon we too were watching a cracking female Velvet Scoter, Long-tailed Duck, Goldeneye, Goosander and Slavonian Grebe along with a creeping Purple Sandpiper [Eds: The only other LNHS one I have seen was on the Concrete Barges at Rainham] and a dashing Merlin. A good end to a wintery day.

Jon Clifton phoned early on in the day and asked if I fancied going for the Desert Warbler near Whitstable and a supressed [Western] Bonelli’s Warbler nearby at Shuart Farm at Reculver.  The trip down was enlivened by my very first crossing of the newly opened QEII Bridge between Thurrock and Dartford. What a view! [Eds: oddly, after the last twenty years of commuting over it most days I still enjoy the view!] The Desert Warbler had gone but two Swallows were first in November and there were many Brent Geese and we estimated that 70% were juveniles.

We soon moved on and snuck down to the farm and it took half an hour to find this silvery little Bonelli's Warbler flitting amongst the Willows and Sycamores.  It regularly called – a vaguely Chiffchaff like poo-eet.  About eight Chiffchaffs were also present along with a few Tree Sparrows and a couple of Brambling.  There were over a 1000 Fieldfare and 600 Redwing in the fields.   The warbler had been present for about a week I believe.  A subsequent seawatch from Reculver produced lots of waders and a Little Auk. 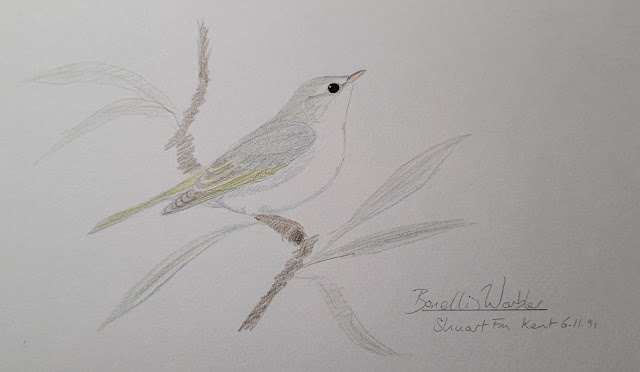 After the disappointment of netting getting a lift up for the St Andrews Chimney Swift [Eds: still need it…] I was quite pleased with the results of a day out in Norfolk with Peter G.  He did not tell me that we were going Goose hunting and amazingly we pulled up at Stanhoe and I immediately refound the adult Lesser White-fronted Goose with the Pink-feet.

The flock soon departed and so we headed for Burnham Norton to look for Lapland Buntings.  The flock was found but only one was seen well.  Lots of Linnets, Skylarks and Twite fed in the damp pastures while Rock and Meadow Pipits were numerous. Amongst the Brent Geese was a coffee coloured leucistic bird that I first saw in 1987 and once again there were plenty of young birds. A Ruff was found with the vast flocks of Lapwings and Golden Plovers and Wigeon grazed all around us. We bumped into a couple of Essex birders – Adrian Kettle and Tony Wells and they had just re-found a seldom reported Richard’s Pipit.  It was a very grey individual with well marked uppers and clean peachy underparts.

Back on the road and just before Burnham Overy Staithe a fine Rough-legged Buzzard glided across the road and was first in Norfolk since my life tick one way back on that most memorable of October half terms in October 1985.

Cley was the next stop and after some beans on toast down at the beach café [Eds: those were the days…] we ambled along the bank picking up a Little Auk and some Scoter while a second Little Auk was paddling up and down the North Dyke. Hundreds of Wigeon, Teal and spectacular Pintail were outside the hide and two Black-tailed Godwits made a brief stop.  The Golden Plover flock on the Eye Field was as good as ever while a nice winter plumaged Water Pipit on the shingle was a good November bird.  Having found Stu we decided to follow him to a phone box to call Birdline but he did not see the  beautiful Short-eared Owl that glided over his car with wonderful golden eyes. News of four Rough-legged Buzzards at Massingham Heath sent us scurrying homewards but only one was seen distantly and briefly along with three Sparrowhawks. [Eds: remember that there were no Common Buzzards or Red Kites to worry about back then!]

Being stuck in the traffic as usual on my way to Middlesex Uni proved beneficial especially as I was between the William Girling and KGV reservoirs when a male Peregrine perched up on a post at the top of the bank!

A day trip up north. Peter G and I met up with Jon Clifton at Great Bentley at 5.45am on a cold crisp day for our journey to Scorton Tip near Catterick on North Yorkshire. The weather held until we got there when the heavens opened.  Our quarry was a Franklin’s Gull and thankfully it only took ten minutes to relocate it with the handful of other birders present.  It certainly made up for my previous dips.  It still had a lot of black on the had and put on a good show. 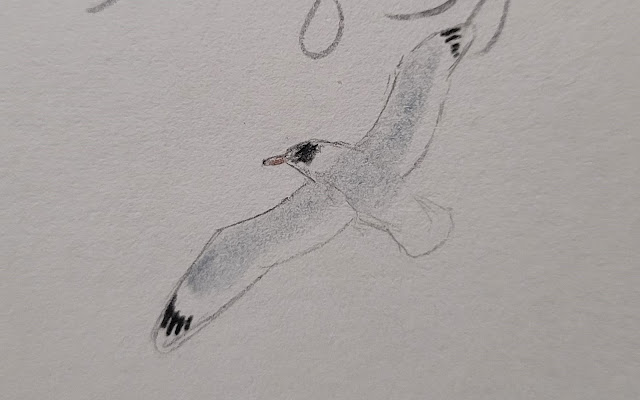 After this we headed north just a 25 more miles to look for the Black Grouse at Langdon Beck.  A couple of inches of fresh crisp snow lay on the ground but the Grouse were proving tricky until we eventually found a single of each sex someway apart. It was my first good look at a female and she reminded me more of small female Capercaille. After a look at the mighty High Force waterfall we headed for home with a Merlin over the A1 the only highlight of the long journey home.

A day in the Home Counties with Jon and Ad Clifton and Peter Pyke that started in the Lady Amhurst Pheasant woods but it was very foggy and a couple were heard and two briefly seen as they dropped out of the trees. All six Tit species were present and some cute Muntjac.  Our main quarry for the day was an American Golden Plover near Milton Keynes and after some chasing around superb views were had of this first-winter bird with the Golden Plover and Lapwing flock.  A lone Dunlin was with the flock and a Sparrowhawk cruised over.

On again and back southish to Uxbridge where the adult Ring-billed Gull had returned to Rockingham Rec. There were footie games going on but we soon found him loafing around the edges.  He still had a full white head with not one speckle.

On to Wrasbury for Ring-necked Parakeets where a local resident kindly let us into his garden to get better views with at least 20 seen.

The Velvet Scoter was still present at Staines but there was not much else on this occasion bar an adult Yellow-legged Gull so we soon moved on again stopping at Papacourt GP near Ripley in Surrey where another female Velvet Scoter and a Black-throated Diver were quickly despatched.  There was a big flock of Siskins and a few Brambling were with some Chaffinches.  Only the lack of Great Grey Shrike at South Norwood dampened an otherwise great day.

Later that evening news broke of a Mugimaki Flycatcher up north.  I had never even heard of this far eastern species and after a few frantic calls I had myself a lift and headed for my bed…

A dip… What a day. Seven hundred miserable birders at Stone Creek on the banks on the Humber in the pissing rain and several inches on squishy mud.  I was not too disappointed and enjoyed a good natter with friends. [Eds: I can remember LGRE that day being particularly animated…] By 3pm it was getting dark and the bird hade already become known at the ‘F@£&£”% Shitty Flycatcher’.  The trip home in continuous rain was made more bareble by using a Drive Thru McDonalds for the first time. Says it all really…

I headed over to Dagenham Chase in the hope of finding the Long-eared Owls and was pleased two sitting full out in the open. Nice to see them back again.  Later on I took Mum over so that she could see them too and added a male Sparrowhawk perched up in the next bush.

Back to The Chase but no LEOs today but there were more thrushes and the Sparrowhawk again.  Six Shoveler, two Wigeon and 60 Teal were on the Slack and I found six Reed Buntings and three flocks of Long-tailed Tits.  A fly through female Goosander was new bird for the site for me.

A slightly misty day out in Essex with Peter G which started well at Shop Lane on East Mersea where 16 Lapland Buntings, 300 Skylarks, 25 Corn Buntings, 15 Yellowhammer, 15 Reed Bunting, 30 Twite and a few Meadow Pipits were encountered in the fields along with about 800 Golden Plover, Brent Geese and a few other waders. The Colne was fairly quiet although there were two Mergansers and 11 Eider.

We moved onto Fingringhoe Wick for lunch and in a couple of hours we did very well for raptors with three ringtail and an adult male Hen Harrier, Kestrels, Sparrowhawks and two Merlins and a Rough-legged Buzzard. [Eds: note that we did not see a Marsh Harrier or Common Buzzard and even Peregrine was still a very scarce bird back then].

A flock of 600 Fieldfare fed in the Hawthorns before we headed to Abberton Reservoir where 2000 Golden Plovers, Goosander, eight Whooper Swans and 44 Bewick’s Swans were noted.  A Little Owl was seen on a roadside tree at Birch on the way home.

I tried to get onto the KGV Reservoir for the Great Northern Diver but all my usual gaps had been filled in so I had to be content with a walk around Connaught Water.  The duck count was pretty good and included 32 Gadwall, five Wigeon but just two Mandarin while a Kingfisher was my first in a long time.