The Sky Is Full Of Birds...

The traffic was kind in the morning and by 10am we were pulling into the car park at RSPB Ham Wall on the Somerset Avalon Marshes.  It was a little calmer than the frantic visit of last May for the Hudsonian Godwit and I was pleased to see that a ‘Visitors’ shed and new toilet block newly ensconced on site.

There was time for a short walk in the fresh breezy conditions and in that time a Bittern boomed, the obligatory Great White Egret flapped across, Marsh Harriers and Buzzards quartered the reedbeds and Water Rails sharmed and kipped from all around. A male Ring-necked Duck had been seen the day before and I was delighted to find him floating around with a small flotilla of energetic Tufted Ducks. My first in some time and very smart he was too with white lined grey flanks, multi-banded bill and proper conehead. 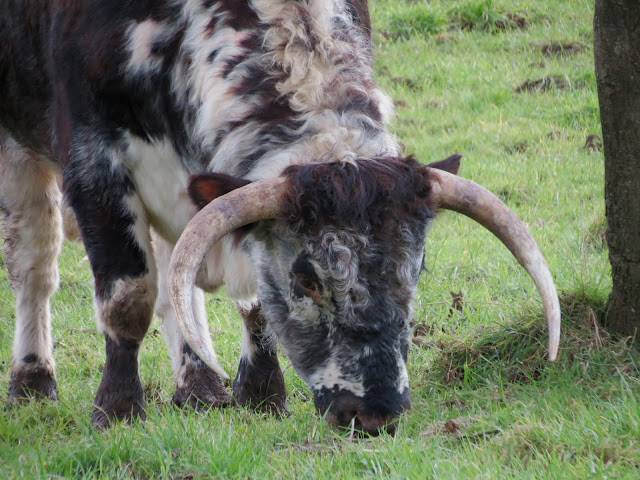 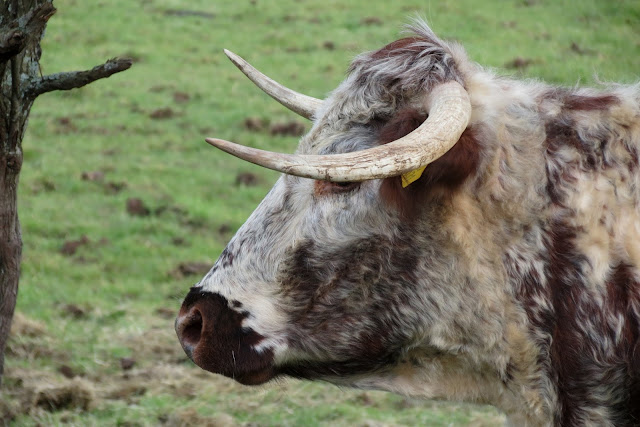 I did not walk far enough on to find the Glossy Ibis but the marsh is looking great and I would love to head back down in early June to see how many species of heron I could encounter...


The rest of the day was spent poodling around the lanes, visiting garden centres and an amazing reclamation yard near Wells, fighting our way up Cheddar Gorge and wiggling for miles out of our way to circumnavigate various small road closures but suffice to say by 5pm I was back at Ham Wall for the Starlings. News on the previous night’s roost site sent us scurrying for the Shapwick end and instead of waiting o the bridge I ambled about half a mile along the river bank to join other hopefuls.

What I saw over the next 45 minutes quite literally took my breath away. In all my years of birding I can safely say that I have never experienced such a vast bird spectacle. The current estimate is about 600,000 (down from a million a few weeks ago) but how they are able to even guess these numbers I do not know. Starling started to arrive in small flocks from all directions and head out to a distant band of trees and pylons. 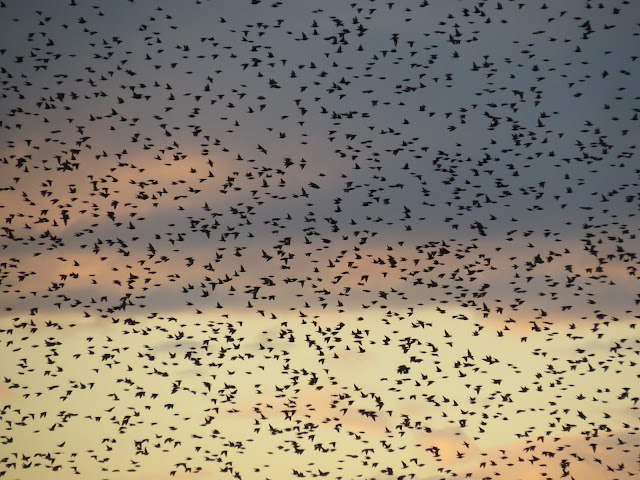 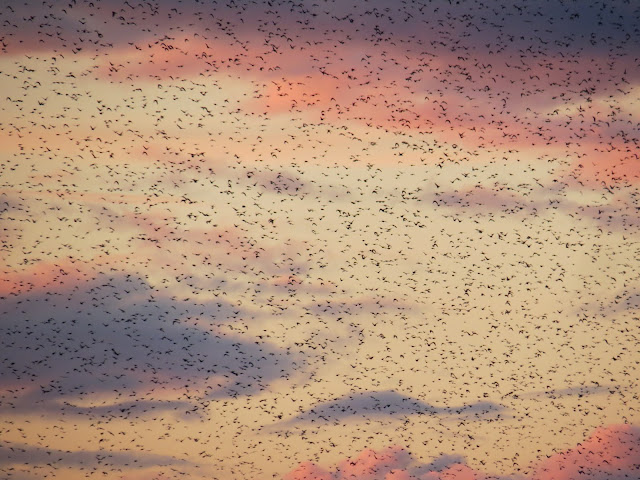 These slowly amalgamated into larger groups before being joined by a huge number that suddenly arrived from the west. From then on my world was simply full of Starlings with vast sinuous lines of pouring in from all directions. Suddenly the sky blackened to my left and a cloud of birds tens of thousands strong descended into the hidden reeds. 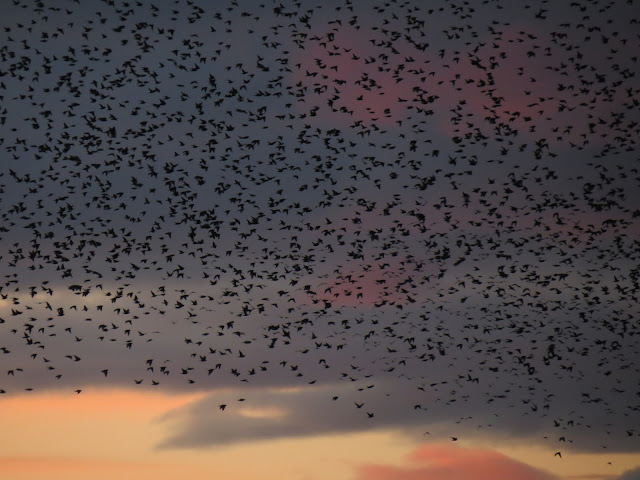 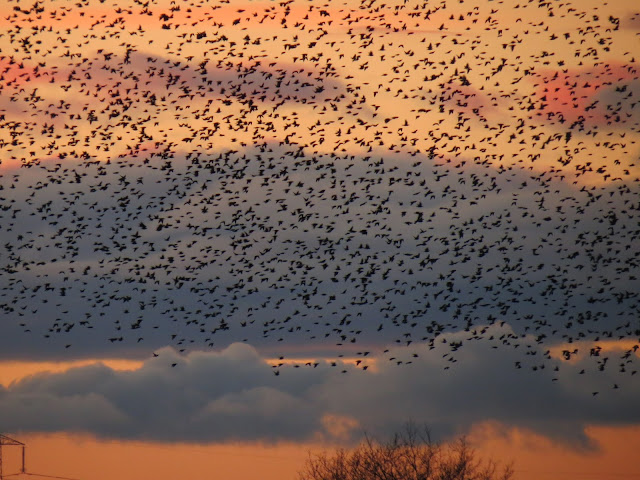 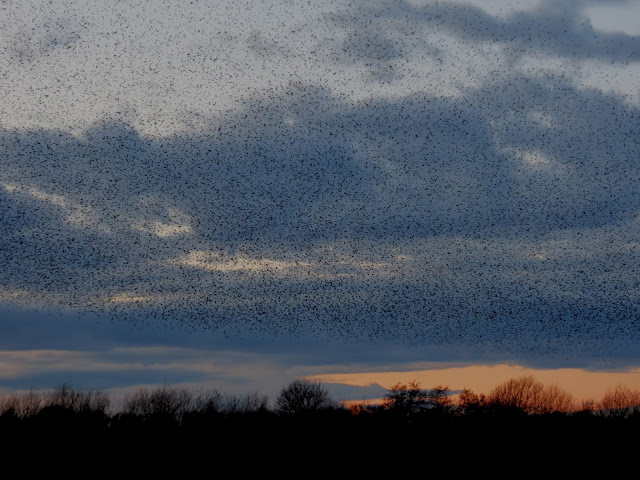 I knew that there were many more to come from that distant tree line and then suddenly they started to move towards us. I snatched my phone up and started videoing the undulating snake of bird biomass as they purposefully made their move.  It took two whole minutes for that mega-flock to taper off as the last of them dropped in to roost. Their combined wings sounded like distant gusting wind outside your window on a stormy night and was replaced by a cacophony of chattering as they settled down for the night.


This was my cue to walk back in the dwindling light while Bitterns boomed, Cetti’s sang and corvids headed off to their own roost sites in a more restrained sedate manner.


I was practically speechless and actually felt quite emotional. The humble petrol hued Starling had just given me the most breathtaking birding experience in all my years with a pair of bins around my neck...

Time for some dinner in Glastonbury before heading south west to Wellington to our Travel Lodge digs for the night.

Up early and off down an empty M5 towards Teignmouth and the lovely Labrador Bay at Shaldon on the south side of the river. As usual I had the place to myself and within just a few minutes I had located a singing male Cirl Bunting. By the time another twenty had passed I was up to 32 birds! They were counter singing all around me as well as feeding in small parties at one of the ‘stations’ in the corner of a favoured field. 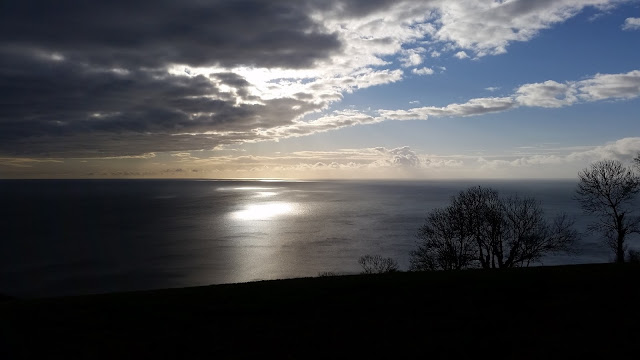 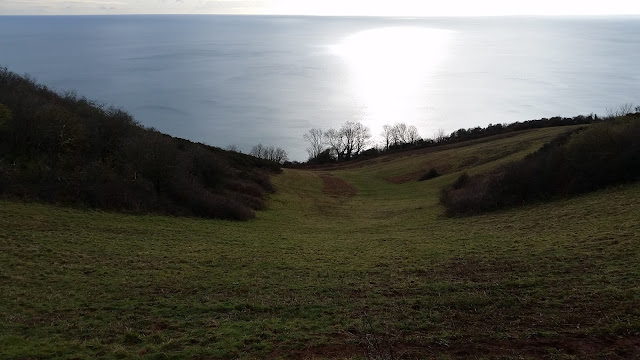 Wonderful views were had and it was nice to study the female birds a bit more closely. One male was especially obliging and allowed a slow and steady approach and was quite happy singing his head off with me beaming just a few metres away. 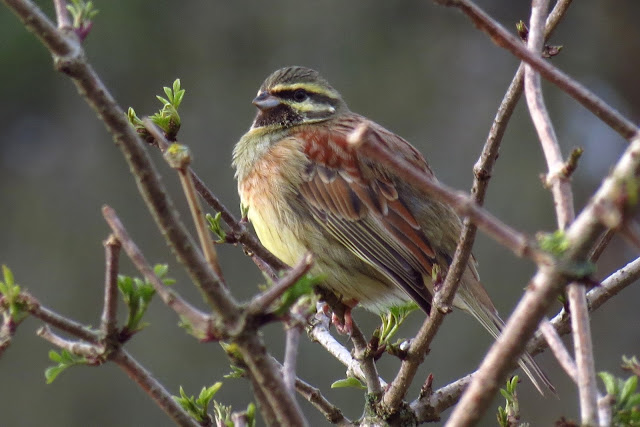 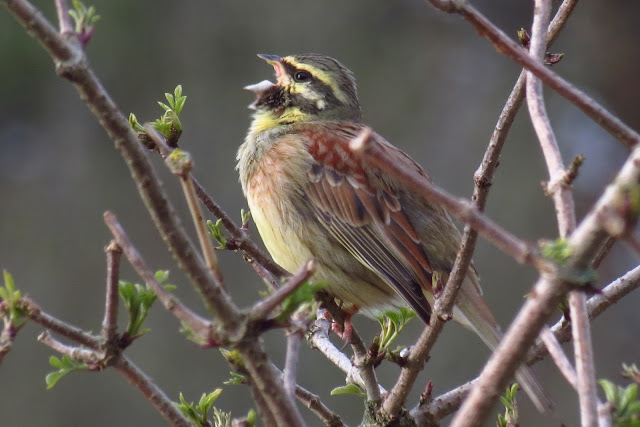 If ever an RSPB project felt like a success then this must be it. The cliff top habitat looks better every time I visit and the birds seem to be doing very well and are getting all the more reliable. I would love to know if they are pushing inland now into the arable farming belt that backs onto the road.


Ravens and Buzzard were seen and it was good to pick up a couple of Reed Buntings with the Cirl flock as I can’t remember seeing them here before.


The rest of the day was spent visiting the delights of Trago, Darts Farm and more garden centres but having filled the car with trays of plants I was not complaining!

A slow drive home with grey cloud behind us but I decided to come back via the A30 rather than the A303 which took us through Yeovil, Shaftsbury, Wilton and then Salisbury. Several stops were made including the imposing Fovant Military Badges carved into the chalk in 1916 and adorning the main escarpment. I would like to see them again without having to stare into the sun! 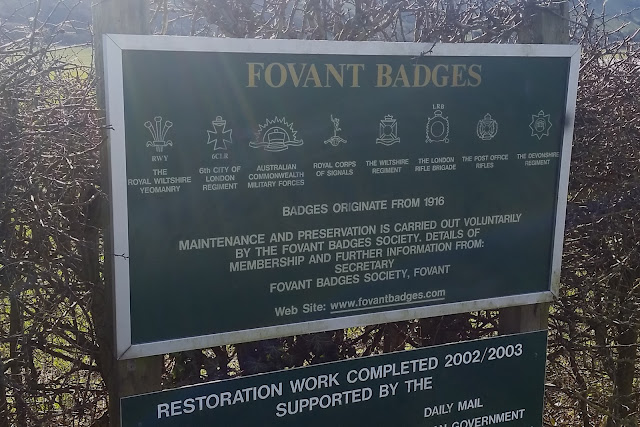 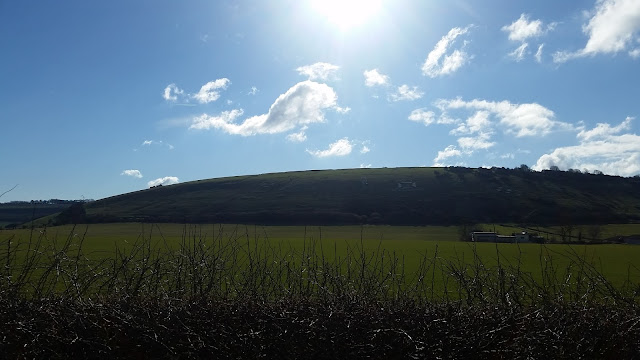 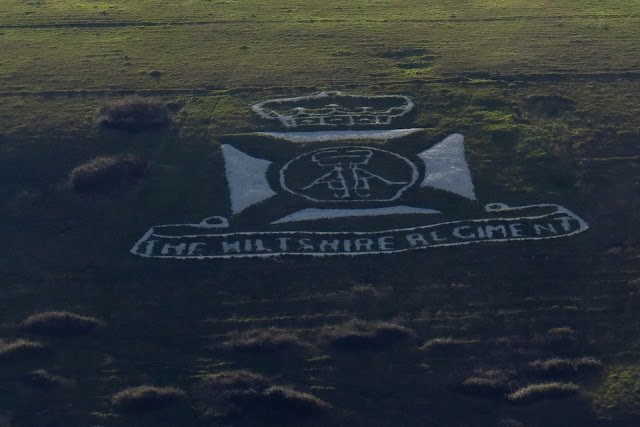 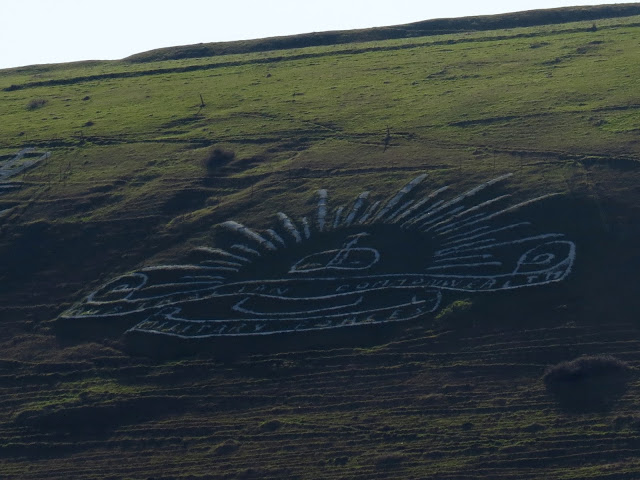 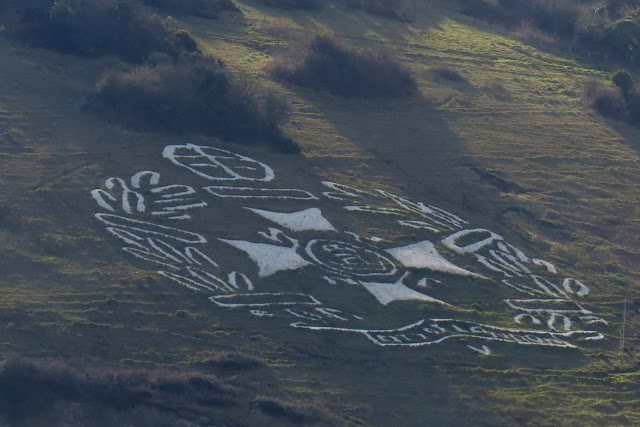 After this we hit Wilton on the outskirts of Salisbury and the imposing church in the middle of the town caused me to turn round and go back for a look.  It did not resemble anything like a traditional English place of worship and had a distinctly Continental Italian feel to it with a blocky shape, separate bell tower and grand colonnaded entrance. 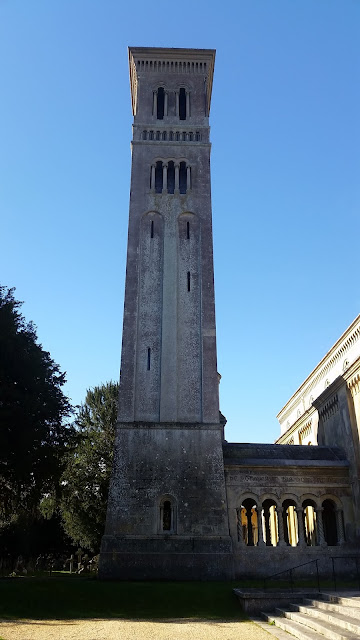 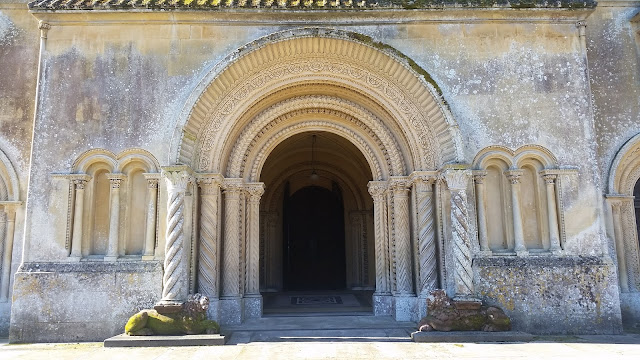 Some later digging revealed the following:

“The story behind this remarkable church is worth telling. By the mid-19th century the old medieval church of Wilton was in a dreadful state of disrepair. The Hon Sidney loved Italian architecture, so in 1845 he convinced his formidable mother to help build a new church in the Italian style, an underataking that would cost them £20,000, a staggering sum for the time. They called in young TH Wyatt, then only 34, the diocesan architect for Salisbury, for what would be his first really major commission.  Wyatt and his partner Brandon created a stunning church, oriented on a southwest axis to front onto West Street. The chosen site had been home to the medieval church of St Nicholas, which was in ruins by the 15th century. There is a totally separate bell tower, or campanile, following Italian tradition. The church itself is on the Roman basilica plan.”

You do not have to have a religious bone in your body to appreciate good architecture and art and the inside was breathtaking. I was gawping at the glittery, gold mosaics and icons that headed way up to the ceiling behind the alter, when suddenly that all slowly lit up before me. Someone of a more susceptible nature may have thought that they were in the throws of an epiphany and I quietly whispered back down the pews to Andrea that I suspected that we were not alone where upon she whispered back that yes we were and she had just pressed the great big white button that said ‘press to illuminate mosaics’... 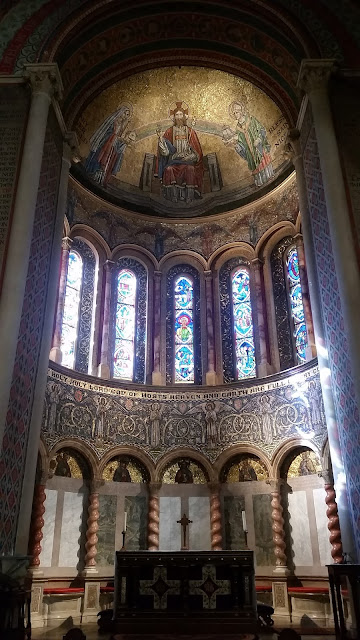 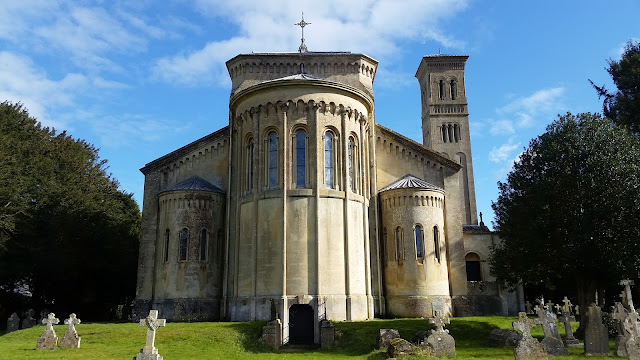 In complete contrast to Wilton, my final stop of the day was at the National Trust site of Figsbury Ring, a huge Neolithic Henge site and subsequent Iron Age Hill Fort.  Like the church, I had the place to myself and walked a full circle around its ramparts affording commanding views across the Wiltshire countryside looking northwest towards Amesbury and Stonehenge and southwest to the spire of Salisbury Cathedral. Another magical place with nowt but some Fieldfares and a Green Woodpecker for company. 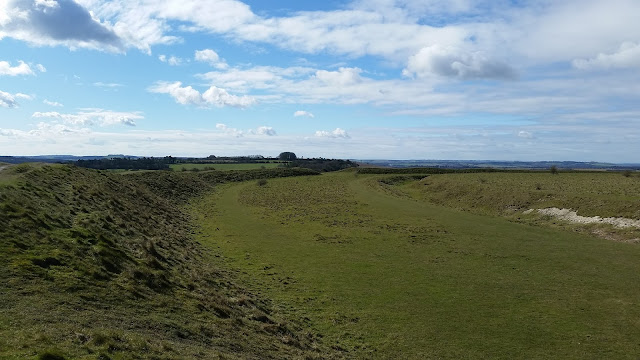 From here I headed down to Winchester before joining the A272 for a pleasant cross country run through Petersfield, Billinghurst, Midhurst and Petworth and eventually home in time to get out the garden and plant my new purchases...
Posted by Howard Vaughan at 14:38 No comments: