A pre-breakfast stroll down to the Kalloni Pool gave me the chance to say hello to a few regulars and watch the only birds on the pool – nine Ibis – coming in to land in the lush vegetation.  It was otherwise very quiet with just a few Reed and Oli Warblers in song and a couple of calling Moorhens.

Most of the day was spent pottering around the local area with a good amount of time around Potamia and Metochi (with Lesser Grey and Red-backed Shrikes en route) where six Ferruginous Ducks found their way onto my Lesvos list on the mini reservoir. They were actually quite tricky to sex and I initially said all females but in my photos at least one appears to have pale eyes. A male Little Bittern flew to the opposite side while a Hoopoe flopped across and several Bee-eaters were noisily hawking. 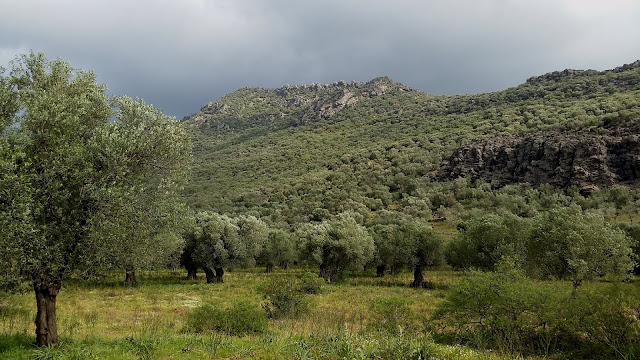 We completed the usual walk up to the dam at Potamia where a Black Stork loitered collecting several Woodchat pairs, a couple of male Red-backs and a smart male Masked Shrike. Hoopoes and Turtle Doves were singing and four Common Buzzard were on territory.


Some quality grubbing produced lots of butterflies including Large Wall and Orange Tips and Small and Keeled Skimmers and Small Pincertails were among the dragonfly highlights along with various chafers, robber flies, bees, soldier and hoverflies.

There were Stripe-necked Terrapins on the river and a huge Balkan Green Frog has deceided that the bloated body of a sheep was a good place to catch flies!


And some wonderful plants were seen too...

The Metochi circuit followed on from this and we collected various shrikes, a pair of Long Legged Buzzards, Rock Nuthatches at the usual nest site and both Eleonora’s Falcon and Peregrine. The lake itself was disappointing with only Little Grebes and Moorhens on it and a lone Great White lurking in a corner. Great Reed Warblers sang and Cirl and Corn Buntings were doing likewise from the surrounding trees. A Grass Snake was seen hunting and males of both Scarlet Darter and Broad Bodied Chaser were obliging in the extreme.

After a late lunch back at the Pela with Spanish Sparrows and a couple of interesting inverts for company, we headed off to Kalami where the still wet marsh held 29 Little Egrets, three necky Purple herons, three Squaccos, three Grey Herons, two Black Stork, five Ibis, 55 Wood Sands and unusually, broods of both Coot and Mallard.  Zitting Cisticolas and Black-headed Wagtails were singing in the juncus and 36 Bee-eaters illuminated some dead trees and adjacent wires.


An interesting russet, ‘red kite winged’ Buzzard drew our attention but this was interrupted by a pelican related text from David Bradshaw... a mild panic ensued followed by a quick scuttle back to the cars and a blat down the road to the salt pan road.  The light was better from here and I thought that it may help in pin pointing where this monster had gone down.  Suddenly everything went up, including the Flamingos and there above them was the pelican.

Scopes were hastily dispatched and at long last Dalmatian Pelican found its way onto my life list. It dropped again and was either on the far south eastern pan or on the sea so it was a quick whizz back down to the hide car park and a swift walk down the track with two White-winged Black Terns for company.

I scanned again and there it was, cruising around like some slightly smaller off white version of the salt mound... The tufty head and pale eyes all helped point at Dalmatian rather than the rarer White and then it took off once again and the dirty grey underside of the remiges confirmed this for sure.

There were plenty of other birds to see including the afore mentioned WWBT’s, three Black Storks jammed on the tiny pool with Wood Sands by the car, 90 Ruff with the first six Little Stints of the trip and a mixed flock of both Ruddy and Common Shelduck.


We ended up craking again at the Lower Ford where none showed but there were two male Black-headed Buntings singing and the Little Owl was perched up on the farm. 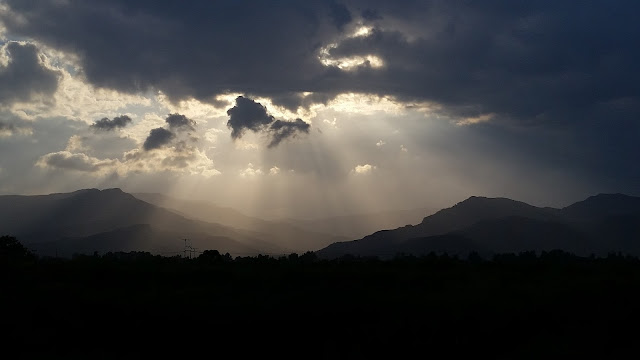 The Scops Owls started early around the hotel and the Barn Owl had a good screech and flew through at about 10pm rounding off what started as an unusually relaxed first full day!
Posted by Howard Vaughan at 20:57 2 comments: