Six days of being seriously unwell left me with less of me to carry around and a bad case of missing the Bird Fair again blues so I dragged my sorry self back into work on Wednesday on a calm crisp morning with the hope of finding a little bit of birding mojo lurking in my outdoor office.
I managed a speedy early morning ‘healthy walk’ with the ladies pre-work and  there were quite a few warblers and high flying Yellow Wagtails to remind me that autumn was creeping onwards despite the current rise in temperatures again. I was too knackered to go out again and lurked in the centre for the rest of the day but resolved to get out before work every morning for the rest of the week if I could.

Thursday saw me on the river wall at 7am with a head bobbing Kingfisher at the mouth of the Mardyke to start me off nicely as she surveyed the river from a reedy perch. The local House Sparrows watched me from their usual Blackthorn and dived deeper in as I passed while Yellow Wagtails invisibly flew over.


I passed many Whitethroats and several Lessers and Willow Warblers were plaintively huu-eeeting from the bushes. A call caught my ear and my ear said ‘Oi!’ to my brain which then took a curious Lesvos leap and said ‘that sounds a quite like the Cretzschmar’s Buntings you hear in the spring’.  The brain then caught back up with that ludicrous thought and said ‘ahh... don’t be daft... what about Ortolan?’

The bird flew towards me and then over my head but I never saw it. It called several times which to my ear sounded like ‘sluip’ with a funny little note uttered after it.  I have heard the Cretz on holiday doing a similar double note.  I always say that ears are easily as important as your eyes in birding; that moment of recognising something as different is often enough to get you onto an unfamiliar encounter.

I descended into the inside trail which added a few more Yellow Wagtails and Bearded Tits to my walk and I enjoyed following the footsteps of two Foxes and a Grey Heron that mirrored each other for a hundred yards on the damp boardwalk.  I pictured, not one following the other but the three walking side by side having a chat about the joys of being an apex predator and where to go for a morning coffee. 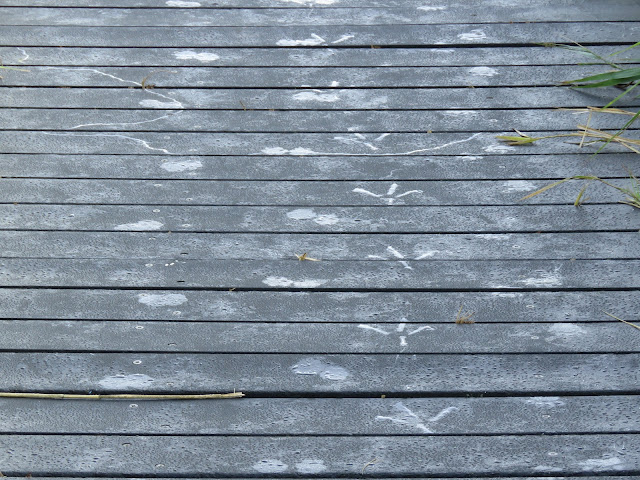 The round the World Clipper Yachts headed up river in an eleven strong flotilla that afternoon and cut some fine skyline shapes.  They come back out on the 1st September and we shall stay open late to wave them safe journey on their year long voyage as the race gets under way 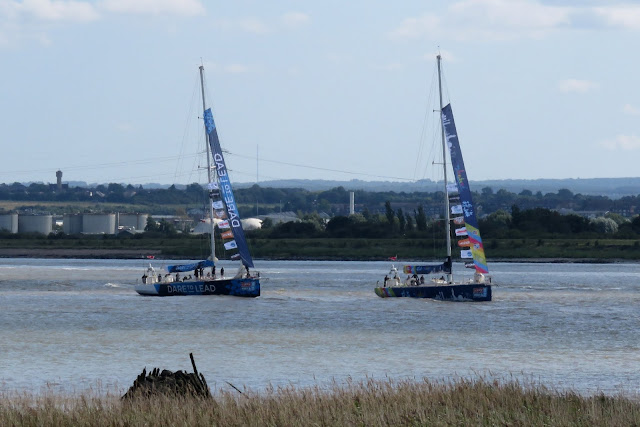 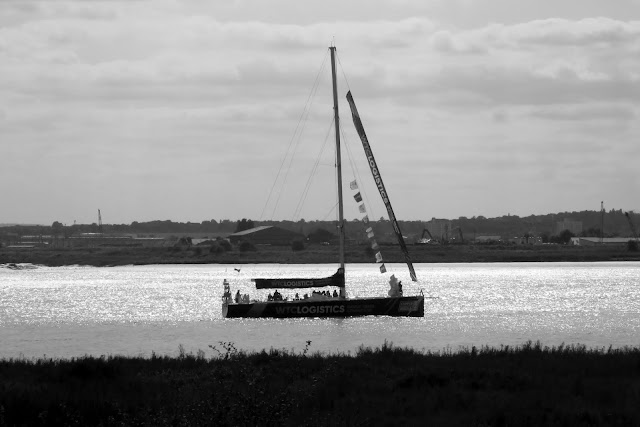 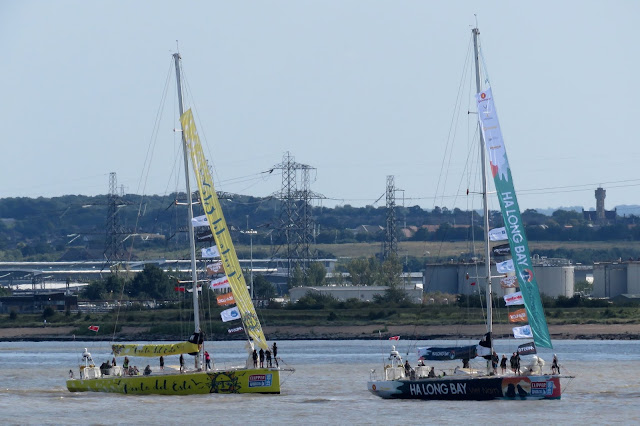 On Friday I managed once again to get up on the wall before work.  There were still plenty of warblers and there were Black-tailed Godwits, Curlew and Avocet in the Bay but it was my first dapper little Whinchat of the season flycatching from the dead Hogweed stems in the Enclosed Bay that I was most pleased to find.  Just how she chose a single fly from the dancing masses swirling around the tops of the hawthorns, I do not know!

Painted Ladies and Red Admirals were on the Buddleias just above high tide and Brown Argus and Small Heath flicked around my feet.


Three young gulls on the foreshore were lined up to test my skills and I was pleased to get all three correct (Thanks Jamie) although I was a year out with the Great Black-backed age...


And so to the Bank Holiday Weekend... Saturday’s early amble proved most productive with two flocks of terns of surprising species with 11 erikking Sandwich Terns being overtaken by an energetic flock of no less than 14 diminutive Little Terns. To put this in perspective, we usually get one or two Little Tern sightings in a whole year so 14 juveniles in one flock for three hours was unprecedented!

There was obviously plenty to catch mid river on the outgoing tide as the number of high dives was quite impressive although how any tern sees a fish in the silty waters of the Thames I do not know.

At one stage they ever settled on the mud on the Kent side where they looked like little white bananas until a Black-headed Gull spooked them back into flight.

And my video is not much better as the flock powered out of the river. They move so fast!

A juvenile Whimbrel came up off the foreshore and headed out onto the Rainham Vedlt and a Curlew went the other way while a Ringed Plover few around calling but was too far up in the hazy blue for me to find.

There were still a few warblers around and Marsh Harriers were out quartering Aveley nice and early. I got back at 9am and before long it was stinky hot outside and things quietened down as expected but a Cattle Egret flew east and was a suitable looking from the window bird.

On Sunday I arrived at just after 6.30 and it was already warming up fast but was still cool enough to be enjoyable. The river was ternless today but a Golden Plover was the first of the season and five Ringed Plover and three Common Sandpipers were in the Bay with 63 Black-tailed Godwits, a Curlew and a single Avocet.


Yellow Wagtails were pinging around with at least 20 coming up from the feet of the cattle and warblers were once again a feature with the big sallow above the turnstile holding seven species along with Blue and Great Tits while Goldfinches were deconstructing Thistle heads and investigating Teasels.

The rest of the circuit was fairly quiet although Bearded Tits accompanied me the whole way and I collected so may cobweb threads that I looked like some sort of extra from a Mummy movie by the time I made it through the woodland.  There were more warblers in here too but I could not find yesterday's Spotted Flycatchers.

A Grey Heron bogged me out from the top of the Bus Stop and was one of four close encounters I had with immature birds on my way round. 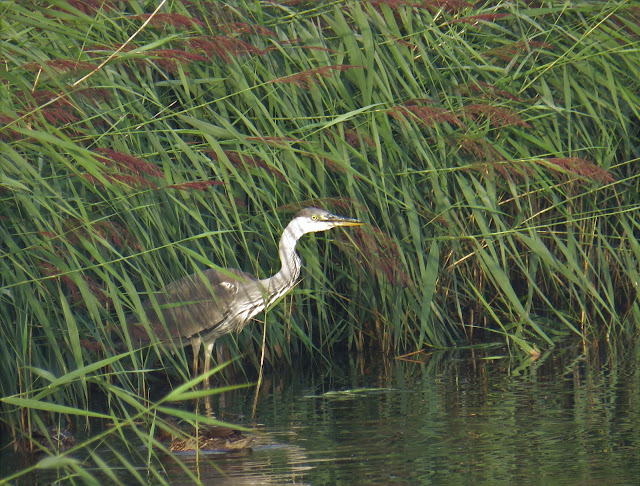 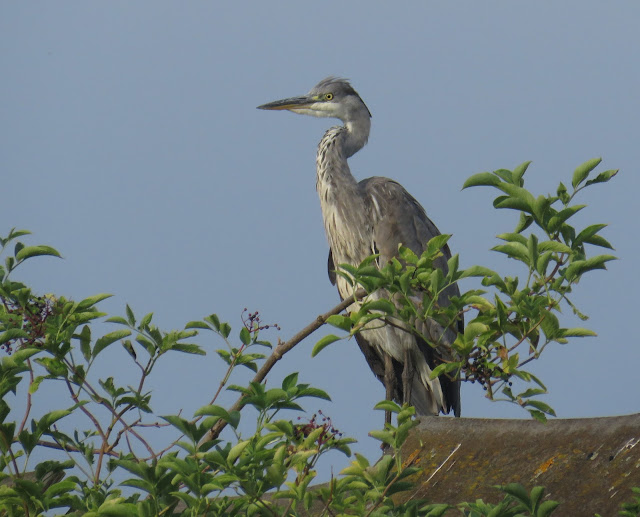 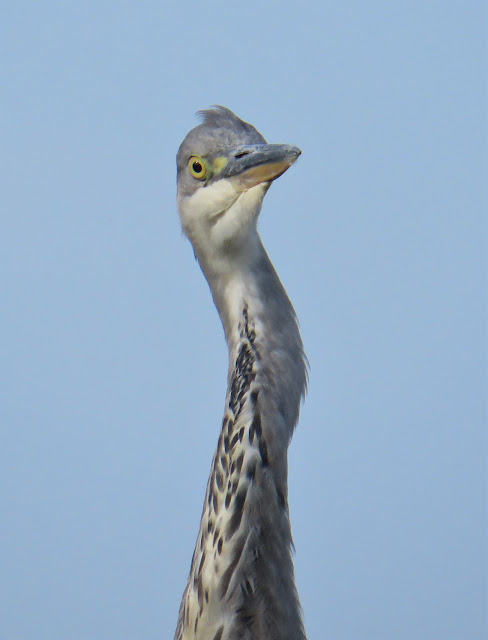 The temperature was already in the high twenties and a Buzzard was circling with three Kestrels and two Hobbies as I settled into a quiet day on reception.

Bank Holiday Monday and the weather forecast was for an even hotter day so I was once again on the river wall by 6.30.  It was cool and pleasant but the promise of some serious heat to come was lurking within an hour or two’s grasp. 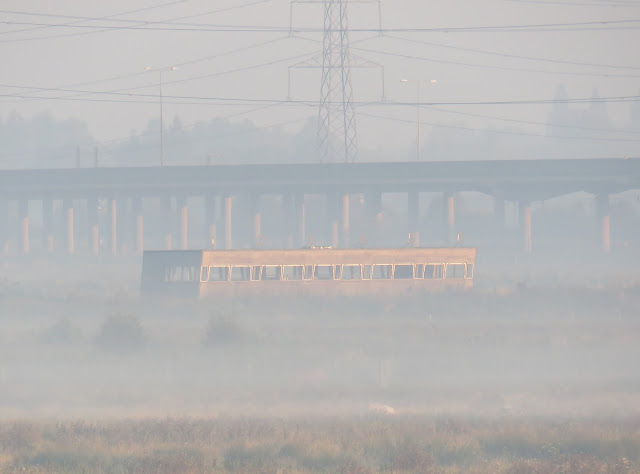 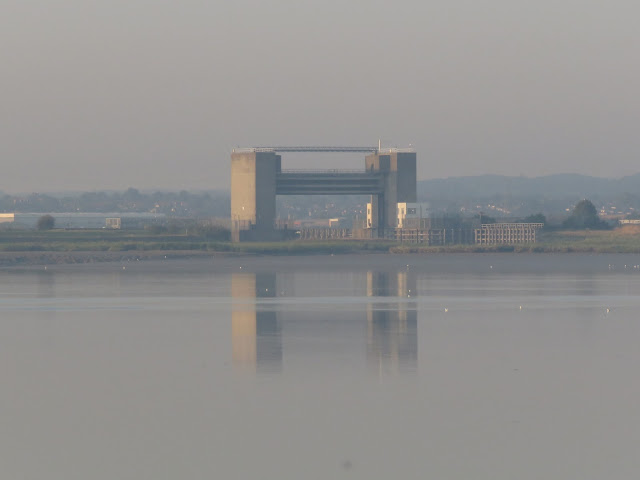 The Thames was once again mirror calm as I walked west and like the other mornings I was accompanied by warblers the whole way with Common Whitethroats predominating. Up ahead in Aveley Bay I could hear the snickering of the Black-tailed Godwit flock.  They are such conversationalists and a feeding group is seldom silent.


Amongst them were seven apple shaped Ringed Plovers, four Redshank, two Common Sandpipers and a now increased flock of 12 Avocets. The single Curlew was still seemingly happy with her own company.  The Avocets were in a curious mood and keep haring out over the river twisting and turning and performing some quality low level whiffling. I thought they were going to dunk in the drink at one stage. 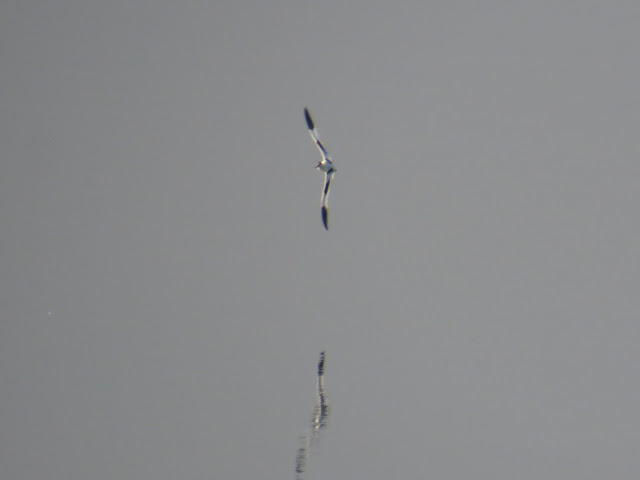 Adult Lesser Black-backed and Yellow-legged Gulls showed nicely on the Tudor seawall and the sharp iodine tang of seaweed reached my senses.


Three Kestrels were hunting the margins and at one stage were trying to catch Migrant Hawkers still hanging up in the foreshore reedbed before resting up on appropriate perches between sorties. 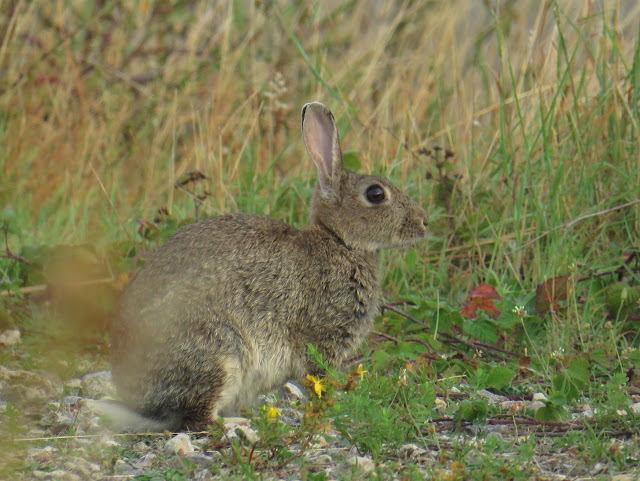 The local bunnies were very unimpressed and the Kestrels did not know what to make of the when they lolloped towards them.  Yellow Wagtails bounced over and a single Grey Wagtail cae down on the rocks with tail wagging madly.

More warblers moved ahead of me and a Grey Heron was nicely framed on the Crake Pool. I headed up onto the landfill path but I did not see a single bird but the views were magnificent and there were countless Brown Argus, Common Blue and Small Heath waking up for their first flight before it got too hot. 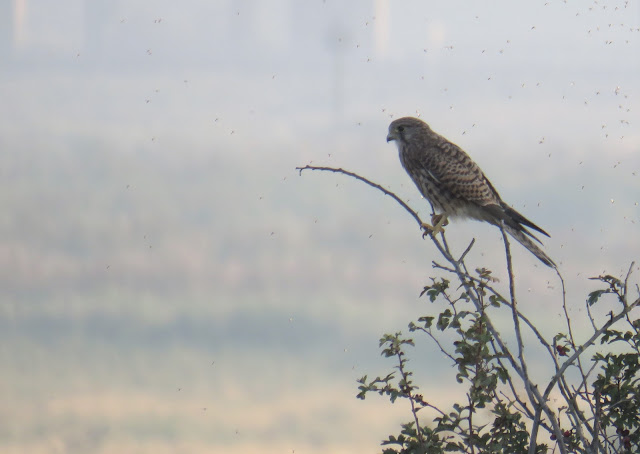 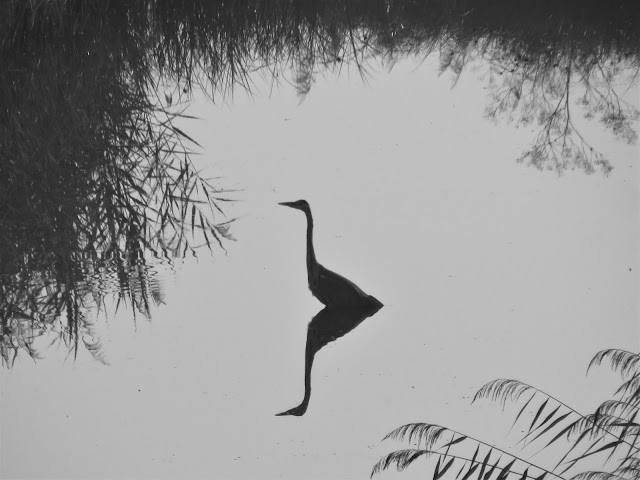 Out over the river high note calling terns drew my attention and I eventually picked up 16 Arctic Terns in the hazy blue loosely following the Thames west while three Sandwich Terns went the other way calling vociferously. 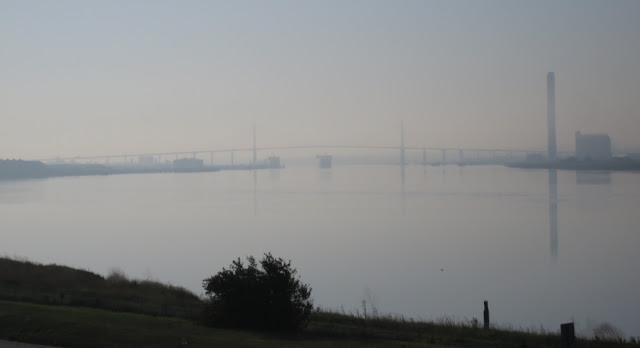 Back at the centre I was required to help open up and made my way straight out towards the Cordite Store where even more Whitethroats, Blackcaps and Willow Warblers were encountered. Most were flycatching high in the canopy of the browning Horse Chestnuts and I was delighted to find a Pied Flycatcher doing what they do best.
Willow Emeralds hung around on the brambles and I actually encountered them further around the trail than I have ever before.

Aveley Pool was literally covered in Greylags and the numbers have rocketed up to 450 in just a few days and the water is speckled with thousands of little white feathers from their evening preening sessions. Two Little Egrets became part of 21 on the pools and a Great White Egret lumbered into flight with 12 Grey Herons from near the Butts Hide where it had been sitting out of sight.  Three marauding Hobbies spooked the various herons and revealed two Green Sandpipers, two Greenshank and a Black-tailed Godwit and the shiny bronze wings of a Brown Hawkers glowed in the harsh light.

Interestingly I kept tabs on the running total for the Bank Holiday... everyone said it was quiet and 'not much out there' but as the scores on the doors suggest, 107 species in three days with glorious weather is pretty impressive. 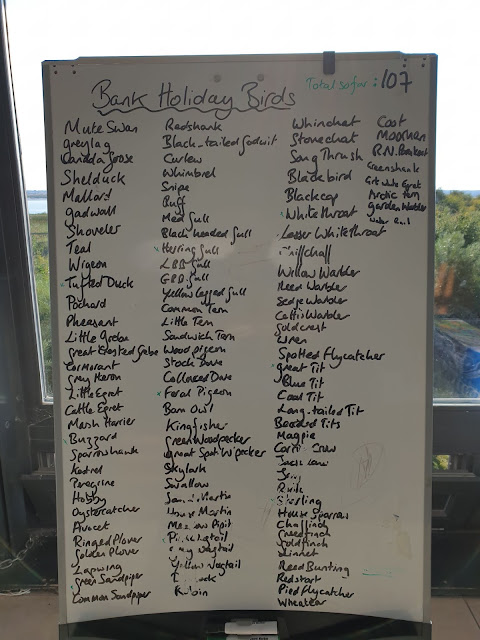 Let's see what the rest of this week has to offer?
Posted by Howard Vaughan at 13:35 No comments: